I wanted to sleep. You know how it feels when you are just feeling like passing out? You crave the deep snuggling comfort of your bed? I laid down and my dog got next to me and... My wife shook my shoulder roughly: "Time to go. Get up! Places to see!" Damn it! I just worked twelve sodding hours...time to get up fifteen minutes after I laid down. She was merciless, gave me a pillow to lean against in the passenger seat and we pulled out from under the house at 6:50 am. I know because I saw the glowing blue numbers last thing before I passed out. She turned up the car radio and started humming to herself. She was having fun. I chose to drool into my pillow. 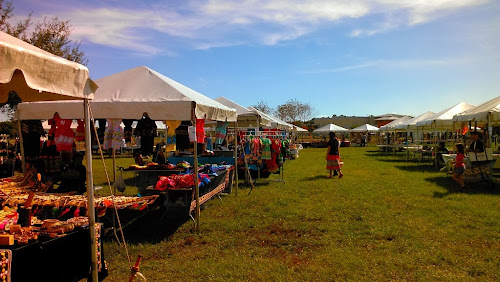 Four hours after we left home at Mile Marker 27 we arrived at the Seminole Village buried in the Everglades north of Alligator Alley, the highway that cuts across South Florida, and the tents were up, the vendors were primed and food was cooking for the American Indian Arts Celebration put on by the Seminole Museum which we visited just a few weeks ago when my wife learned of this weekend get together. Key West Diary: Ah Tah Thi Ki Museum . 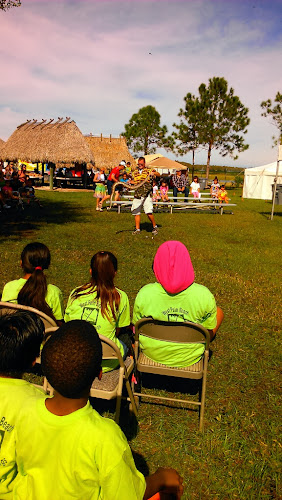 We made our entrance even as the wild animal dude was showing off his rattlesnake buddy. The rope muscle is apparently as venomous as God made him but they think they are good buddies so no one is biting anyone. He said, but I was as grossed out as the young scouts were, including the one wearing the pink underwear on his or her head. 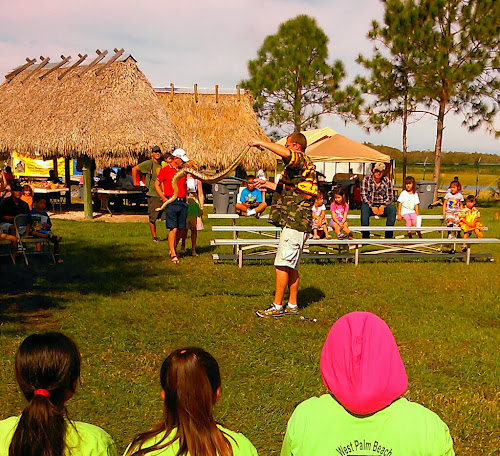 Linus the blonde skunk was next. I didn't know there were blonde skunks either...and we learned how skunks target you when they defend themselves and so forth. It was a great presentation. You missed something interesting informative and entertaining under the ninety degree sky. 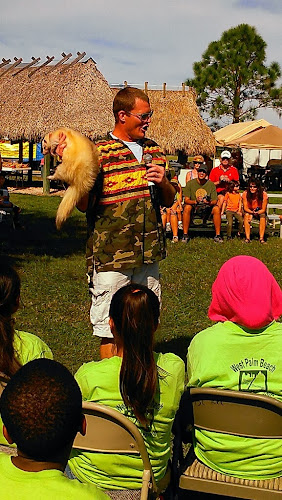 His audience was all there for the Okalee Village Critter Show, from the Hollywood Seminole reservation. Seminole Tribe of Florida - Tourism And Enterprises, Seminole Okalee Indian Village 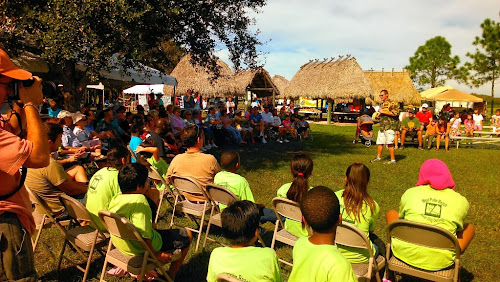 Black Jack was the black vulture on display, 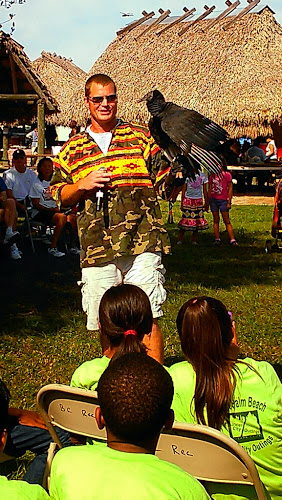 ...and then Sable the red tailed hawk, an interesting bird. Light colored underneath to blend with the sky and dark on top to blend with the ground beneath. Capable of flight at hundreds of miles an hour and a hard core predator. Many oohs and aahs from the crowd. Life's tough for these birds. One in five live long enough to leave the nest, one in 300 die of old age. This guy is past his sell by date but he lives in captivity. 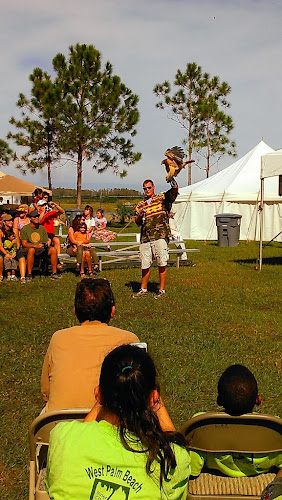 Then the gator wrestling with Edward Osceola watched over by a grim looking Otter John. Apparently being on land makes alligators feel vulnerable (!) and they get a bit agitated. No problem for a man called Osceola. A bit of a problem for me as the show was hidden in the shade, out of the direct burning heat of the noonday sunlight. Camera settings were impossible to manage. 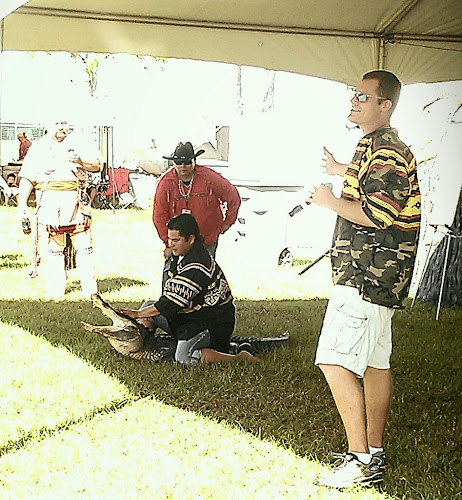 Say what you will I don't trust alligators, perhaps because I don't understand them, but I do know they catch food for consumption later so hunger is not why they hunt. I like to observe them from a distance thanks. Not so this dude. 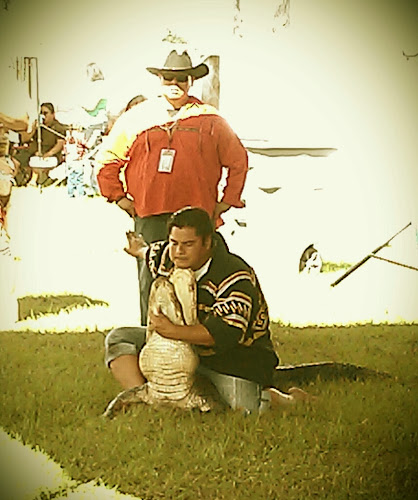 Being a 911 dispatcher is said to be a stressful occupation. Check this out for stress: 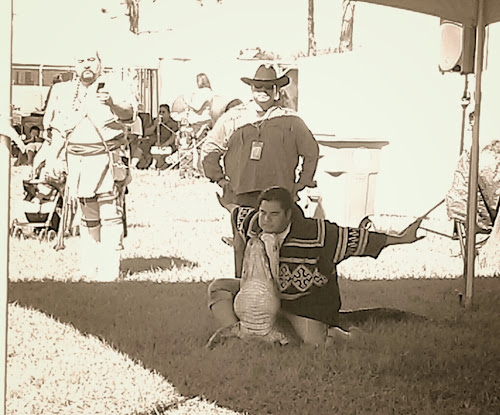 Surviving an encounter with an alligator apparently brings out the bear in Seminoles. The bear dance, accompanied by pounding drum beats and guttural Mongolian throat songs, or some such. 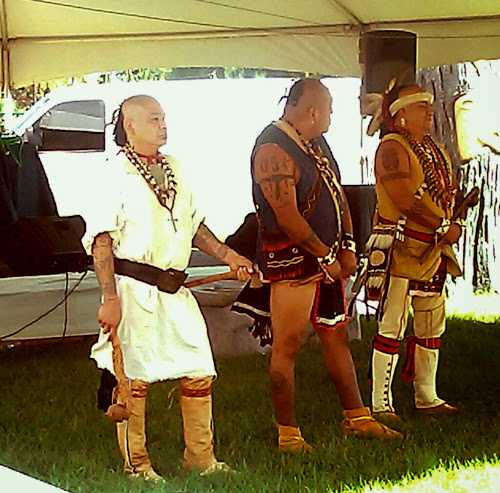 Apparently it's a way for young Seminoles to feel each other up, a courting ritual disguised as an expression of animal empathy. Public dances for white people's appreciation are apparently toned down but the women volunteers invited to dance with the Seminole men got into the spirit of being a stomping bear. 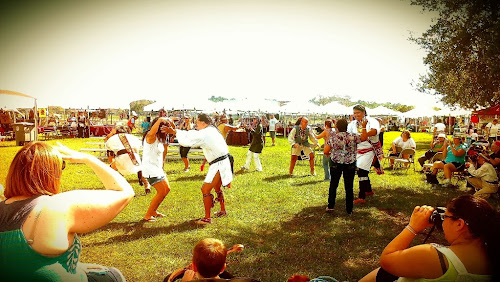 Huh? We both noticed the Muslim woman getting into the multi-cultural spirit grinning like nobody's business, as she went round clawing in the air and pawing at the Indians. Kudos for breaking down barriers I say. 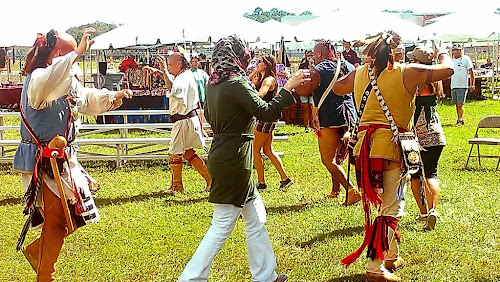 Then there was the all-important shopping. 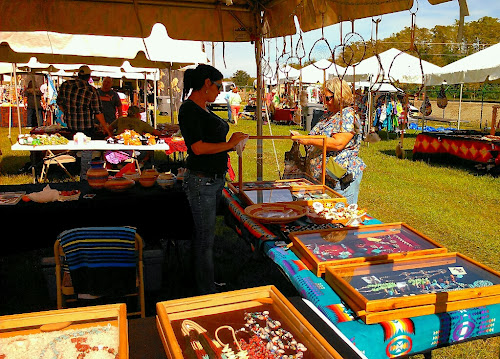 We got Christmas gifts for my sisters who grew up on stories of Indians and I wanted a gross alligator claw back scratcher. My wife balked but it was recently my birthday and we both got into the event as seniors (urgh!) and I got my way spending six whole dollars for the object. "I don't want to know how you got these things," I said. He grinned. 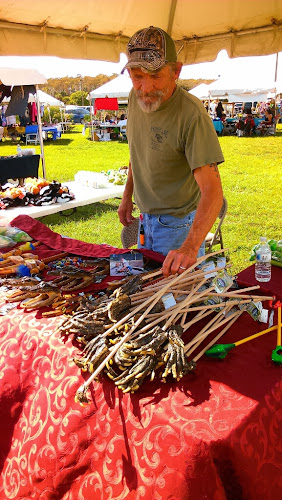 This lot showed up from Andros in the Bahamas. It's the one among the Family Islands I haven't visited and want to. I'm told Andros which supplies the capital Nassau with fresh water is quite intriguing and under inhabited, a bit like my neighbor Big Pine Key with reticent residents, piney woods and watery channels. I still want to sail there. I remember hearing the radio crackling with messages from the village of Morgan's Bluff, as in those days they didn't have phones and used marine radio to communicate. They sounded isolated and romantic and piratical and I've never yet got to see the place! We bought some stuff as a stop gap instead. 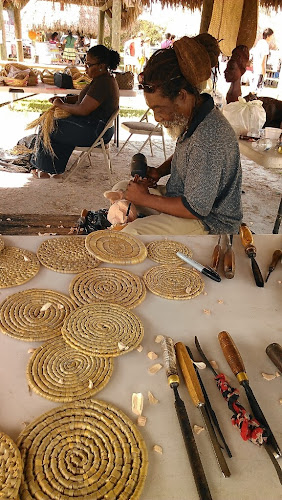 No, we didn't eat alligator this time. 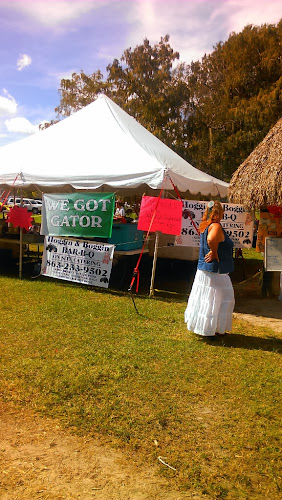 We had beef stew in brown gravy over rice and agreed the cabbage was first rate. "I think I may have to rethink cooking cabbage," my wife said. She does great Brussels sprouts but hates cabbage. Some Jew. I love cabbage. Some goy. Great things may come from this Indian experience...perhaps more cabbage for me! 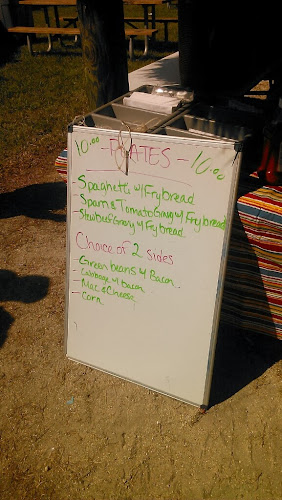 It was close to ninety degrees, hot humid and close. They were quite heroic in their hot open air kitchen. 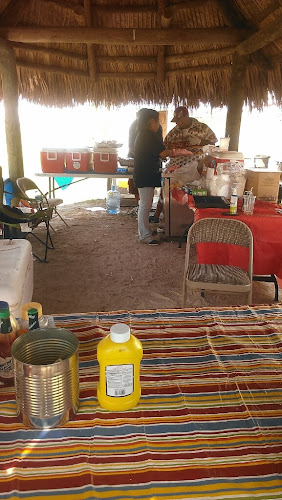 There was a lot of food for ten modest dollars, rich and heavy and delicious. "I will never be hungry again," I said as my dog watched my every move with great care. 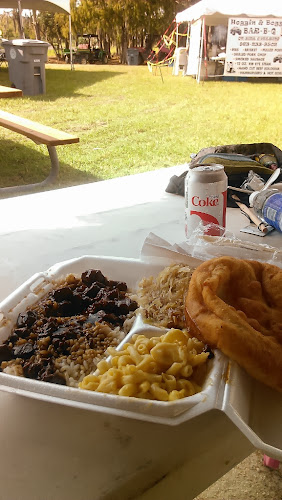 She got a taste, I can't imagine denying her a chance to sample all those lovely smells that had got her interest. I am not one of those humans who expresses his self control through denial of his dog's base desires. I imagine interrupting Cheyenne's sniffing of an interesting smell in the same way I get frustrated when someone interrupts me reading a book. I anthropomorphize and I know it. 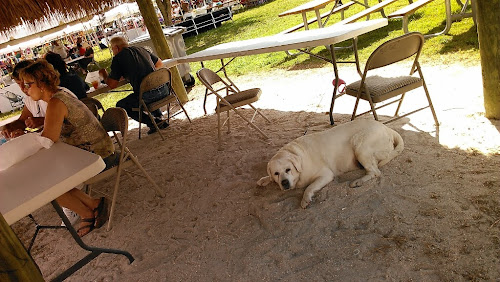 I have a confession. She got away from me while I was fiddling with my camera and started snuffling under a vendor's table earlier in the day. "I got those cookies from Subway in Okeechobee!" the poor woman wailed, a farm town 90 minutes away, whose bounty was now in my Labrador's mouth. I was mortified. I searched out every vendor, scoured their offerings and rounded up a mixed bag of cookies. I think she was surprised when I came back with two ice cold bottles of water and a dozen mixed cookies. I didn't blame Cheyenne for being a dog, it was my fault and I fixed it, as best I could. 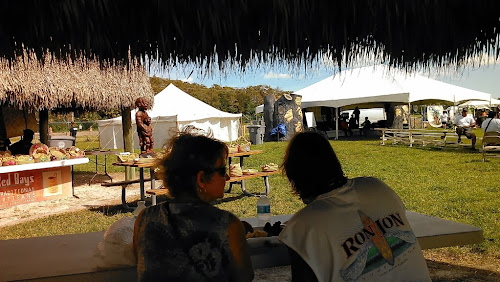 A nice place to spend a Saturday together. Come early avoid the crowds. Sadly I have to admit my wife was right to keep me out of bed and get me on the road before the sun came up; it was worth it!

Posted with Blogsy
Posted by Conchscooter at 6:00 AM 2 comments: