First published April 10th 2009 I figured this isn't a bad time to put this essay back up as pretty soon winter  boaters will be by and this place will fill up behind Turtle Kraals...

It's behind Turtle Kraals, the dinghy dock that serves the anchor-outs living on the hook off Fleming Key and around Christmas Tree Island (named for the Australian pines that flourished there), known to chart makers as Wisteria Island (named for a ship that foundered there years ago). 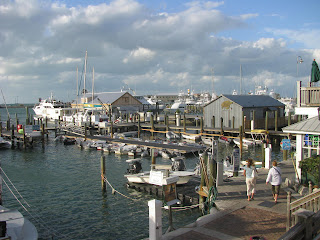 The one big issue that faces people who travel on boats is where to park their dinghies when they put down their anchors and want to go ashore. For those with money one of the attractions of stopping off in marinas is the ability to tie up to the dock and simply step off the boat. For those who don't want to spend, typically between $30 and $100 a night (for a typical 30-40 foot liveaboard boat), but a night at anchor is splendid. It's self sufficient, it's got more privacy, better scenery and it's FREE! Then there is the problem of how to get ashore if you want to go shopping or see the town or buy spare parts. 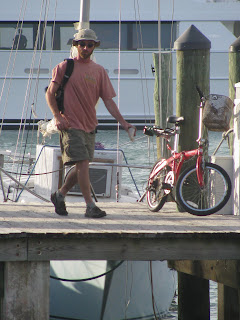 Things are always breaking on cruising boats and finding parts is a constant issue. So it is that towns that have boating populations frequently offer dinghy docks. Key West has two official such docks, one at Garrison Bight and this one, more downtown behind Turtle Kraals restaurant and bar ($6 a night or $80 a month, no dinghies over 12 feet in length, trash, showers and water included). 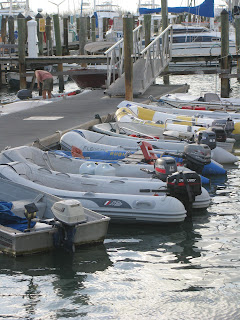 I wander along the waterfront from time to time and I watch the comings and goings of the water rats, many of them youngsters, some of them retirees and a very few in between, and I can't say I envy them, though I remember my previous life fondly. 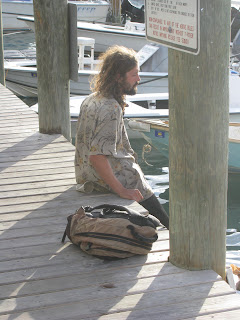 I still have opinions about which dinghies make the best vehicles to get ashore, and they fall into two main camps. The inflatable dinghy made of hypalon or some such material: 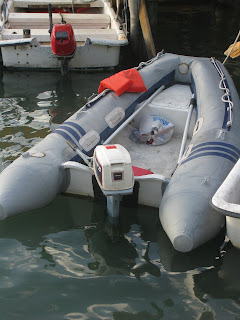 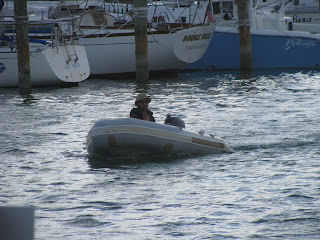 Difficult to tip, easier to stow sometimes, surprisingly tough, though difficult to row. Or there is the hard dinghy camp which I think frequently ends up being the choice of the boater who lives firmly in one spot and rarely moves the "mother ship." Not generally what I call a "sailor" but more of a a liveaboard: 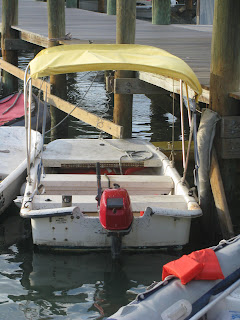 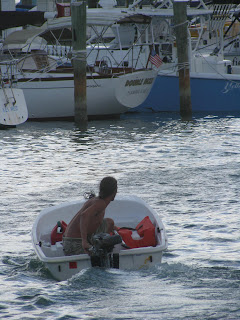 One of the observations I have made over many years of living aboard and cruising is that a person's mobility is in inverse proportion to the size of the dinghy. If you see a small sailboat with a large well equipped hard dinghy hanging off the stern you can bet they haven't pulled up the anchor in a long while. There is a form of snobbery among boaters about these things and people are always being judgemental about each other in the way humans tend to be. My wife and I belonged in the inflatable dinghy camp and on our Gemini catamaran we had what we considered an excellent solution for transporting our dinghy: Some sailors think hanging the dinghy off the back of the boat in davits is dangerous at sea, but like I said everyone in the world of boating is a critic. This picture was taken while cruising the north coast of Cuba and we had hauled the dinghy from Santa Cruz California, off the back of our Gemini 105 without a problem. Some people with large boats have large dinghies. I remember being anchored in San Juan Del Sur in Nicaragua when a very large "gin palace" was visiting the town and we felt like peasants when the crew of the big motor boat stepped off a dinghy two thirds the size of our 34 foot (11 meter) catamaran. They had a steering console on their dinghy, but that's a rare feature for we the little people. I found on at the dinghy dock on a regular sized dinghy: 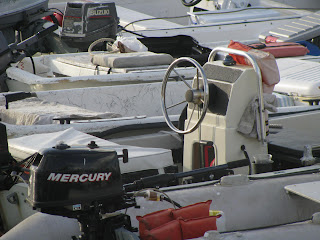 Living on a boat at anchor appears glamorous to land lubbers a lot of the time, but when you look closer it takes effort and energy and organization to do it well. You don't want to forget anything on your shopping list because in that case you do without. 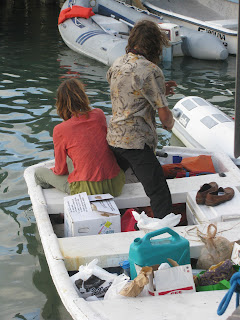 And you may be anchored half an hour from the dinghy dock across cold choppy waters...On an afternoon when skies are gray and the temperature has dropped to 70 degrees (20C) you might miss the comfort of a commute by car: 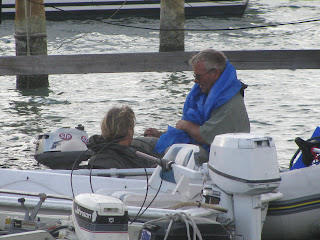 And while we are pointing out the most romantic parts of living at anchor let's not forget "dinghy
butt" which is the experience of getting your backside soaked while traveling to or from your boat. Going to the boat isn't so bad as you have (I hope) clean dry clothes on board. All you have to do is strip, rinse and hang your underwear on the lifelines right between you and the sunset you wanted to admire. Coming to town "dinghy butt" is a whole other world of hurt. Imagine walking all day, shopping, going to the movies, sitting on a bar stool, or even standing at work for eight hours, with a salt water rotted crotch. Yes, you can pump out your dinghy all you want but that one small, mild mannered wavelet will leap up three minutes from safety and dump salt water all across your nether regions. 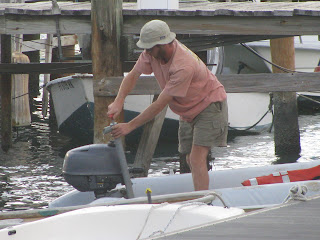 Then there is the problem of dinghy motors. Hardly anyone rows any more, and even though some still do almost all anchor outs rely on small, two and increasingly, four stroke motors. Which don't always start when they haven't been cared for properly: 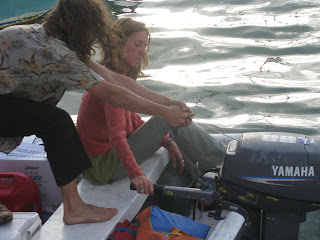 See, there I go being critical. Actually she sounded a little miffed too when she hissed: "Just get it started!" he was commendably restrained just pulling the rope in silence until finally he was rewarded with a grudging, choking cough. I'll tell you what though, if he doesn't get it sorted and reliable he will be single handing soon enough. This guy appeared to be single handing already and he was working on a recalcitrant old British Seagull, the original two stroke outboard motor developed in World War Two. And notoriously unreliable: 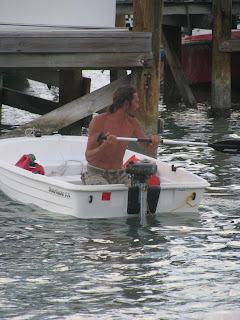 Actually they are very dependable if serviced regularly and treated with the care a small engine deserves in a harsh environment. If they won't start they are horrid, as the starter rope has to be wound round the flywheel for each try: 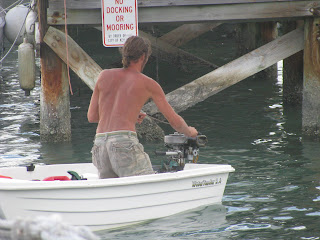 He too suffered in silence, pulling away and guiding his dinghy with his paddle between pulls: 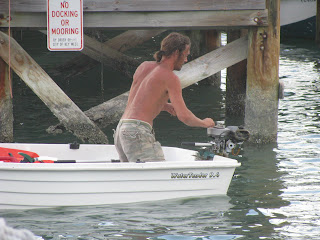 He was smart, though, or experienced because he carried alternative propulsion with him, even it was just a paddle. A dead motor is crippling especially in Key West harbor waters which have fierce currents and lots of assorted traffic. Eventually he buzzed off as can be seen further up this essay. There are rules about what you have to carry including lights, fixed in this case though an all-round white flashlight will do if your dinghy is slow, less than seven miles per hour (12km/h): 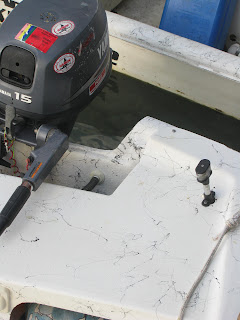 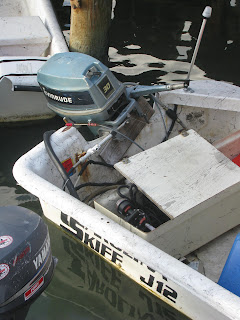 You need life jackets and flares to be legal and registration if your boat has a motor in Florida. And if you don't you can expect to get stopped by the Marine Patrol, known these days as Florida Fish and Wildlife and get fined if you aren't in compliance. Occasionally Key West PD gets in on the act too, and because Key West is, effectively, a border town the feds are here in force, every letter of the alphabet soup, DEA, FBI, JIATF, and no doubt CIA though I'm sure they couldn't care less if your dinghy has lights or valid registration. Naturally anchor outs fancy themselves rebels so they make a point, many of them ,of flouting this or that. I always preferred to fly under the radar and not draw attention to myself. Which is why I still have factory mufflers on my motorcycle. I am a milquetoast rebel.
.
Once you get used to the idea that many working people live on boats you can get to recognize them by certain signs they give off. Live aboard boats need electricity so some have wind generators like this: 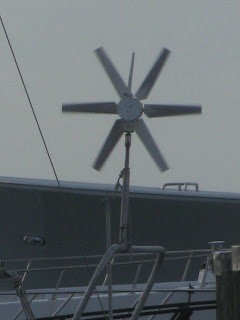 Others have solar panels like this, in Gun Cay, Bahamas, though they work fine in a marina too: 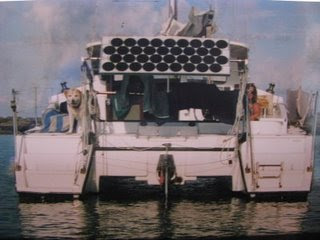 Bicycles work well for people who live at or near the docks and boaters tend to prefer small wheeled fold up bicycles thinking they are easier to carry in the dinghy: 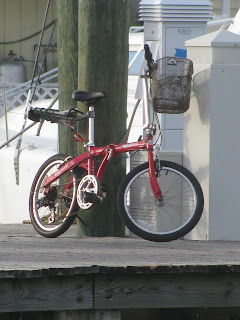 Which they are but they are never easy to get back on the boat. Plus they are cumbersome to store in most boats and end up living on deck and rotting away...that's my opinion and I'm sticking to it! Liveaboards are identifiable too, certain clothing choices, a certain swagger perhaps because they think they live a cool "lifestyle" which I suppose they do: 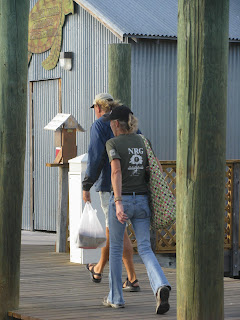 "Be safe!" she called out as though the dinghy ride to the boat is less safe than a roadway commute, a touch of the high seas adventure for people who's boating tends to be limited to the harbor waters. That became the problem for me. Living on the boat and working a job turned the boat into a parked vehicle, too cluttered to sail, too tired to clean up and take off. Now I live in my house I go out on my little boat far more than I ever did when I lived aboard, even in a marina, and held down a job. For youngsters and would-be adventurers the big back pack, the small boat and the envious stares of the land lubbers make it all worthwhile: 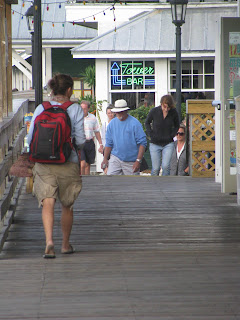