I'll be honest, I wasn't at all sure how Rusty would make out in the Big City last weekend. He has been working on getting over his nervousness around people and dogs but Miami seemed like a lot after only three weeks with us. 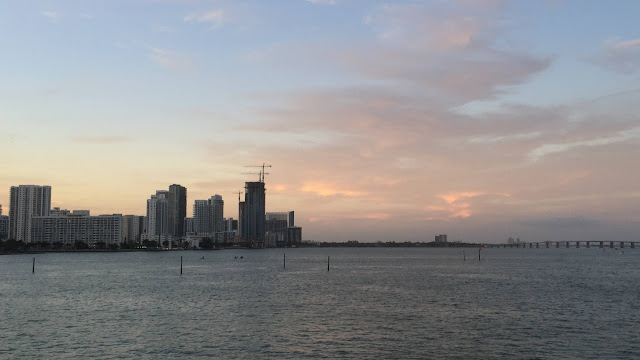 We struggled though commute traffic in mainland Miami. There was a concert  downtown  and we sat in my wife's Fiat 500 surrounded by sheet metal as drivers raised in the Latin American school of urban driving chaos jostled for advantage around us. I rather enjoyed the jam, watching cops stand helplessly by the mess unable to disentangle the press of cars. At this stage my bladder was not demanding attention and thus the scene could be admired relatively serenely. Rusty slept on the back seat of the Fiat. Finally we got to the bridge to Miami Beach. And got stuck again. 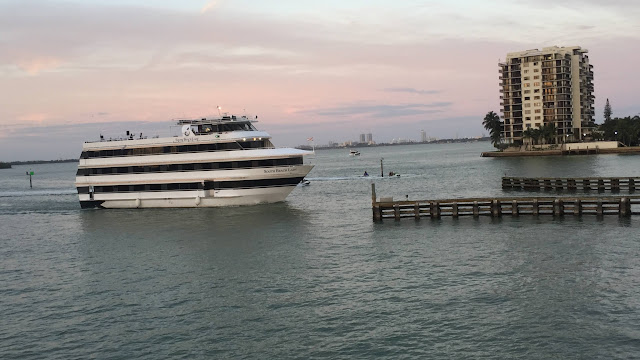 I tried to be serene but the old bladder was acting up at this stage as we fully expected to have arrived at our friend's apartment on Belle Isle. That bridge was up forever giving swarms of pedestrians cyclists, skaters and assorted hangers on time to gather and clog the roadway. 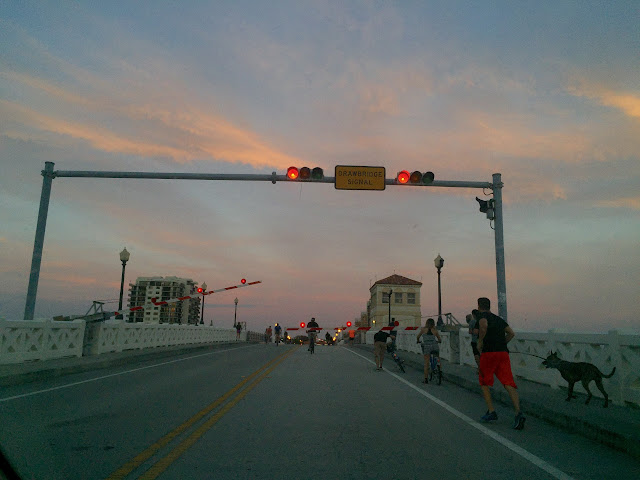 It was half a hundred individual parties on the bridge. Parties of one or two or four hanging out chatting, phoning and staring as the evening darkened in concert with my mood. Rusty sat up according to my wife and started whining when I got out of the car to take a few pictures and enjoy the balmy evening air. You can see his little head in the back window. Cheyenne could barely fit in the Fiat, but my little Carolina Dog hops in and out with the greatest of ease. 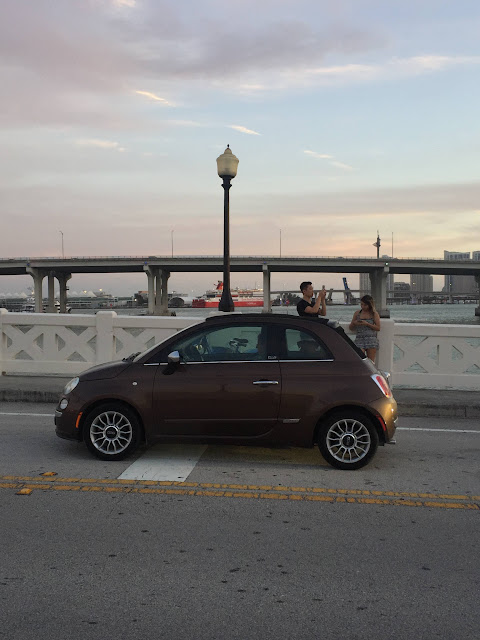 How our buddies found an apartment on the waterfront looking across at Miami Beach proper I don't know but it was very cool. The apartments are elderly and relatively affordable I'm told for this part of the world and short term rentals are not strictly kosher. but all can be overcome with luck and timing. 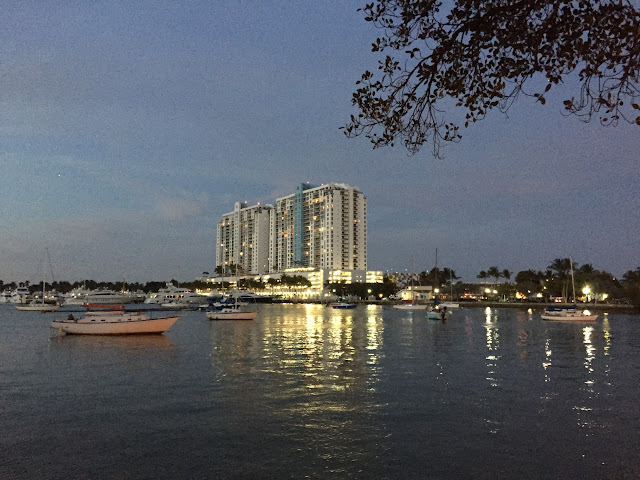 The owner enjoys her own rather spartan taste in furnishings but the boys had a couple of bottles of wine cluttering up the fridge so we set to and took turns in the massage chair. They also had a toilet which was the highlight of my arrival. Rusty made himself at home on the couch. Good dog. 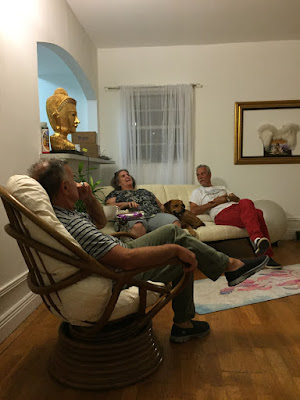 It was a lovely walk at dusk across one more bridge watching cars jockey for position at traffic lights like they were in a Formula One heat as we strolled along with a small brown dog watching and sniffing everything he met. I like fast driving and in Europe I am not the most skillful or speediest driver by a long shot and on a motorcycle young bloods on Ducatis run rings around my old bones but in Miami the aggression undermines the rather low skill set of the drivers. They push and shove with zero finesse and use brakes like battering rams. I would rather drive through Rome in rush hour than Miami on a Sunday morning given a choice. 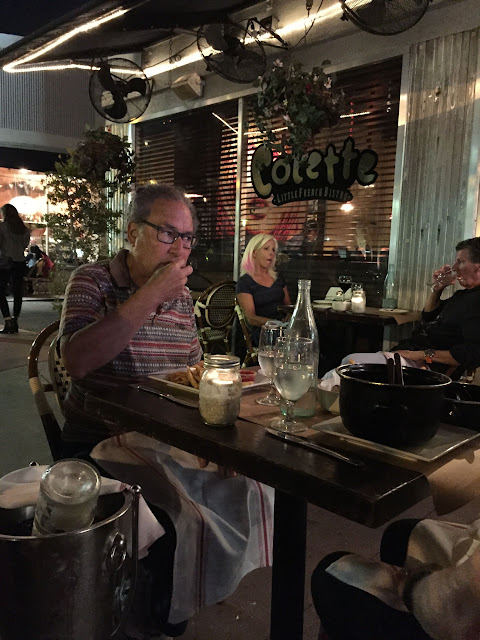 Colette opened a French bistro with sidewalk seating. I usually prefer to leave the dog at home when eating out but under the circumstances we couldn't leave Rusty behind and as it turned out he was perfect. He got a bit nervous when large dogs walked by but he was a trooper, never begging or annoying the patrons. He watched the world go by from his privileged position as a dog with an owner. I don't think he'd have been tolerated when he was just a miserable stray. 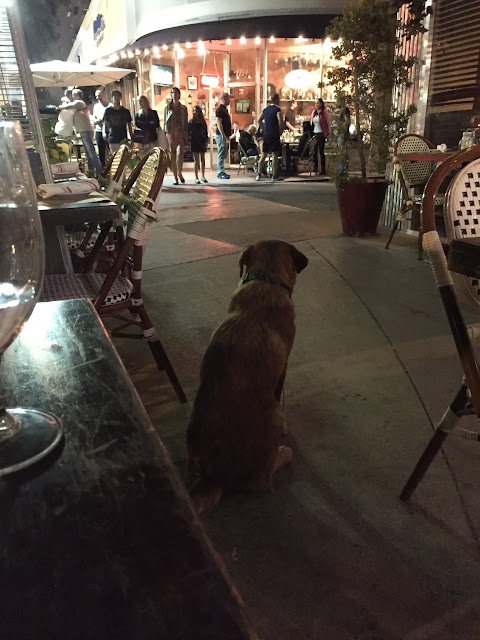 As it was he hung out as though he was to the manner born: 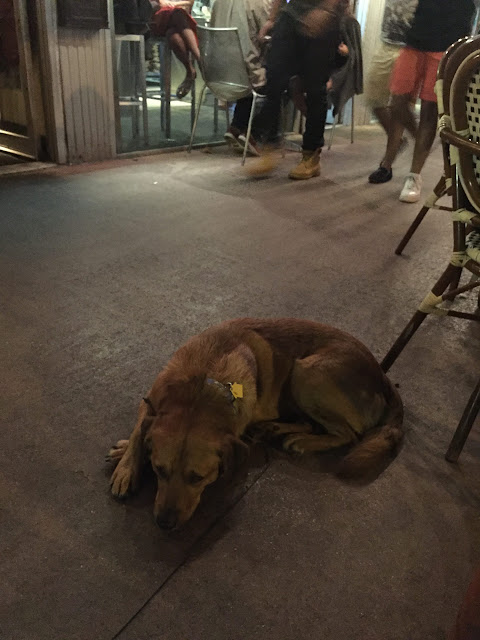 And when he got bored with our riotous living (bottles four and five) he went looking for love. And found it.  He makes friends easily does my little American Dingo. 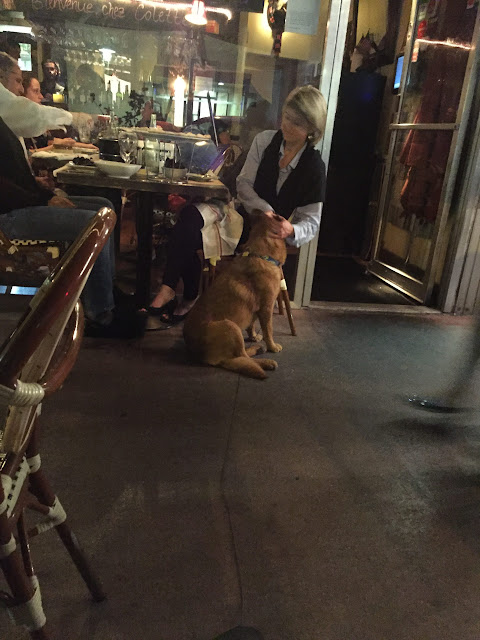 It was another lovely walk back through the weird and wonderful architecture of South Beach, on a perfect night. The wine didn't help but we managed to to not make fools of ourselves though perhaps we strolled a less than direct route home. 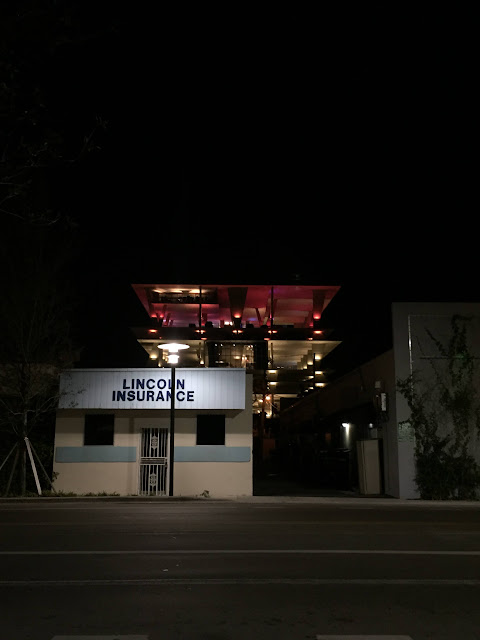 A park torn up for construction set Phillip to reminiscing about the Bee Gees. My wife the designated driver got us safely back to the hotel where we all passed out. 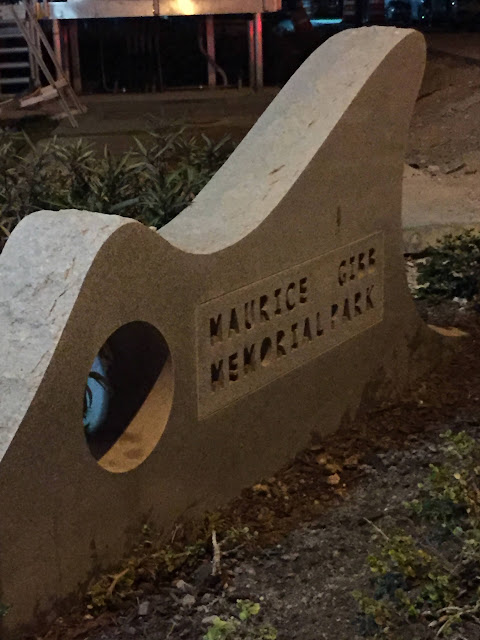 And in the morning I was less hung over than they were - ha!- and we went for brunch where I distinguished myself by placing my fried egg on my burger and when I took a bite the damned thing exploded in my mouth, and on my hand, and on my face, and on my shirt front, and onto my crotch and down my leg (where drying egg pulled my leg hairs as I walked) and onto my Crocs. General hilarity ensued as I sat there like the victim of a pie thrower. I decided photographs were not really necessary to record my humiliation. Our waitress looked aghast. Score one for the country bumpkin. 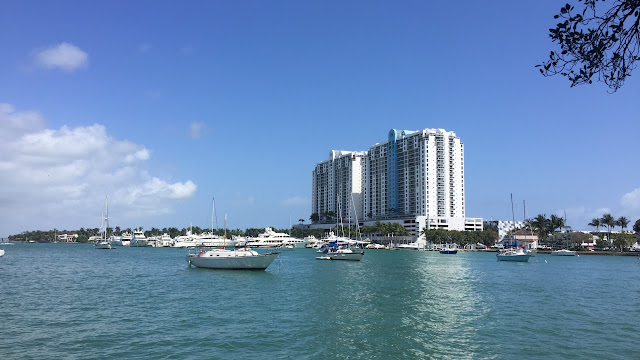 Rusty overall did far better than I did. He managed the loud traffic, the tons of people, the strangeness and newness of everything. And he ate his food tidily. Good dog.
Posted by Conchscooter at 12:00 AM 36 comments: