Today's the day that decides whether Europe in the 21st century resembles that of the last century or if self determination in a time of diminishing resources means a united Europe breaks into several small pieces. Catalonia has set a date in November to vote to ask Madrid for the right to vote on independence and Northern Irish leaders say they will review their future status in the rest of the United Kingdom if Scotland votes "Yes" today. The question? "Should Scotland be an independent country?" Simple enough with widespread implications. A sense of humor helps...seen at Gretna Green on the English/Scottish border: 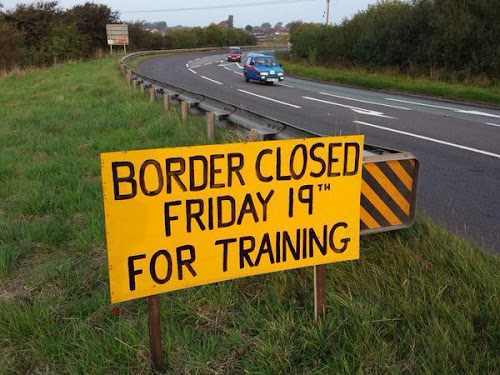 In many respects the vote seems like a peculiar exercise in tomfoolery. Scottish leaders insist come independence they will continue to use English pounds under the control of the bank of England, and the Royal Mail will deliver the post and Scotland will be part of the European Union. All of which is in question as English leaders say they want no part of sharing anything with an independent Scotland, except their share of the National Debt; while EU leaders say Scotland will have to apply for membership and that could take a decade to process if Spain doesn't veto their application as vengeance for Catalonia's renewed drive for freedom. 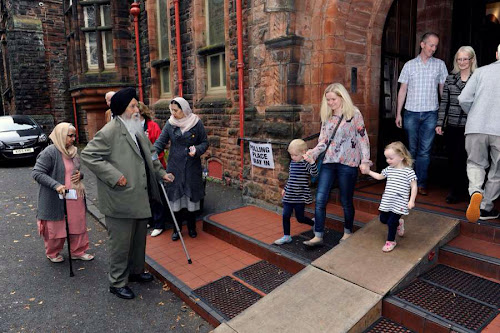 At this point all the considerations in the independence fine print are left behind as just about every single Scottish resident is showing up at the polls today between seven am and ten o'clock tonight local time. (The UK is five hours ahead of US Eastern time). One thing the independence vote has done that is positive and worth noting is that it has generated debate, some violent, but this is as pure an expression of true grassroots democracy as any we have seen on either side of the Atlantic. Earlier this year European Union nations voted for their members of the European Parliament and we saw a huge upset with right wing anti-union members getting elected. Watching those results I tried to imagine an upset in a Presidential election in this country. And frankly I could not see that. Voter apathy in the US is the product of that electoral certainty. Scottish voters, as young as 16, are streaming to the polls because they know their vote counts. They have no electoral college to interpret their wishes, or multi year monstrously costly elections decided by money long before votes are cast. Money has been spent and claims have been made because the outcome of this vote, likely to be known in 12 hours, is in doubt, too close to call. 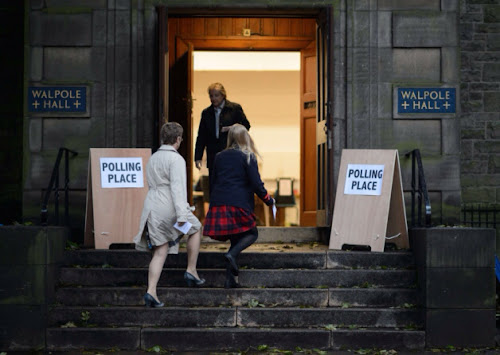 As you watch this vote ask yourself what the Federal government would do if Montana elected to vote to secede. Inconceivable isn't it? More to the point I'd love to see something as simple as a viable third party candidate run for President with an actual chance of winning. Democracy is supposed to allow for upsets and whether or not Scotland decides to end its 300 year old union with England there can be no doubt they have stepped up to vote in a race with no certain outcome. Watch Hilary Clinton's race for President and ask yourself how uncertain is that outcome by comparison. And how expensive. And how little policy will change after it's all over. And then ask yourself what it must be like to be a Scottish voter today.

Posted with Blogsy
Posted by Conchscooter at 11:00 AM No comments:

Looking at the thermometer on my phone I was quite surprised to see it was supposed to be a modest 83  degrees. Faced with a  six mile ride home I wondered if it might not actually be closer to a windless 95  degrees. 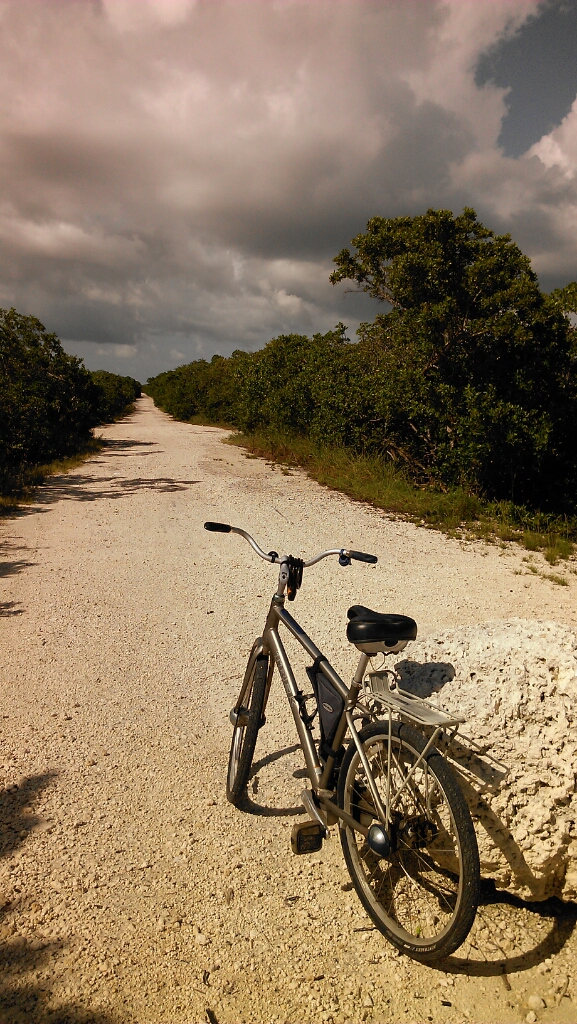 I was as far south as I could conveniently go on Old Stat Road 939A on Sugarloaf Key, at the spot where the old road used to cross a tidal creek in he mangroves: 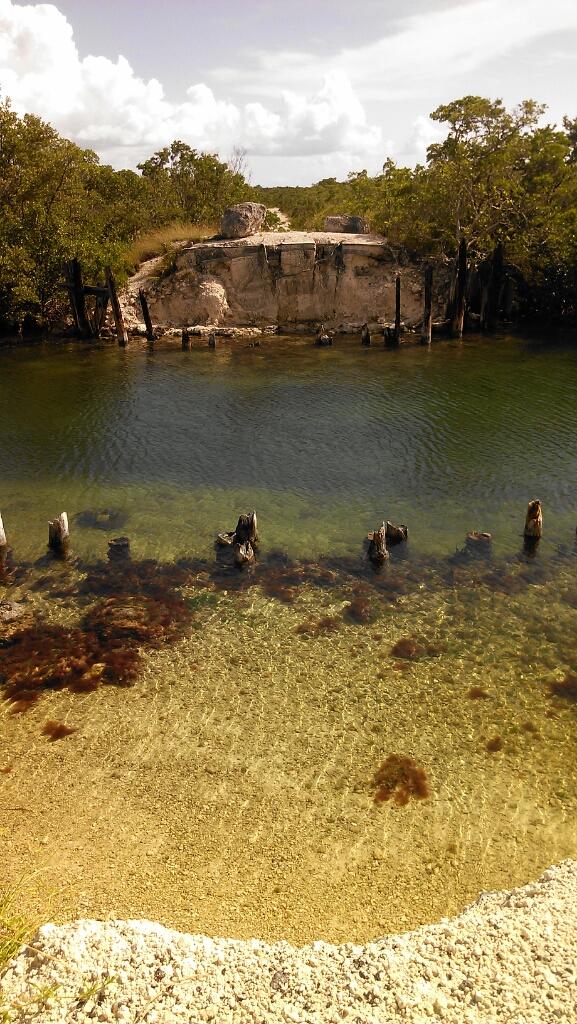 Just last week i was here on my boat checking out Tarpon Creek where the boat seen below was turning. 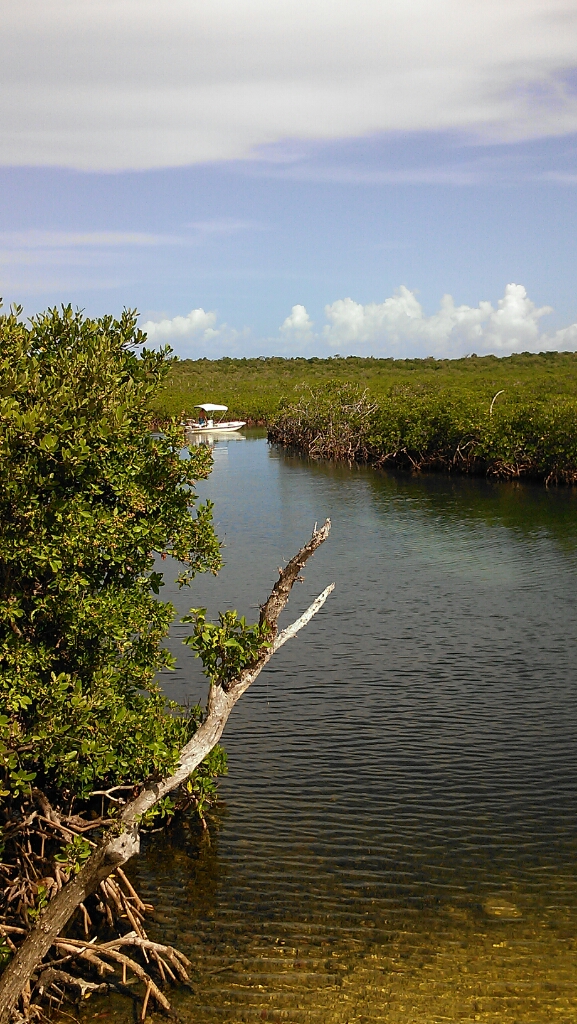 Only when I was here I drifted through the channel feeling far from civilization. This boater was playing a loud stereo that blasted 1980s dance music across the tops of the bushes making it seem like he was whistling to keep his spirits up as I watched the white canvas square twist and turn along the channel. 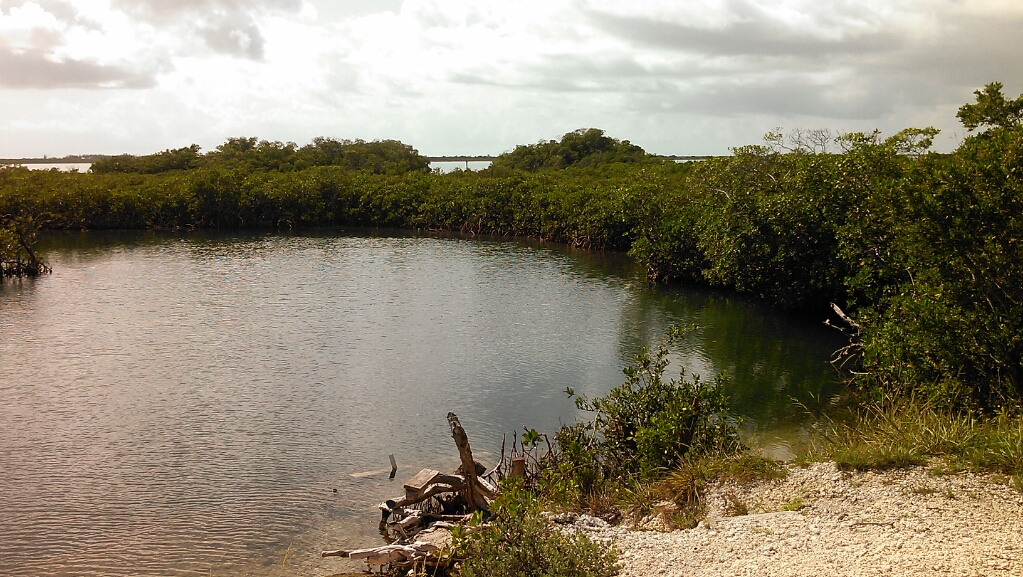 This is a popular spot for picnics and for ...trash: 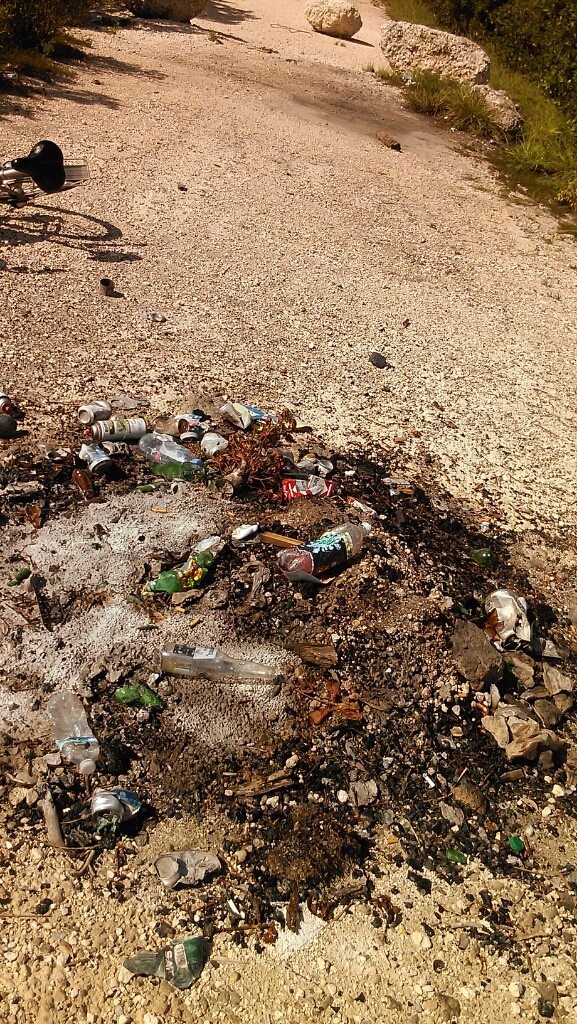 Even though the last two miles of dirt track are now closed to motor vehicles. 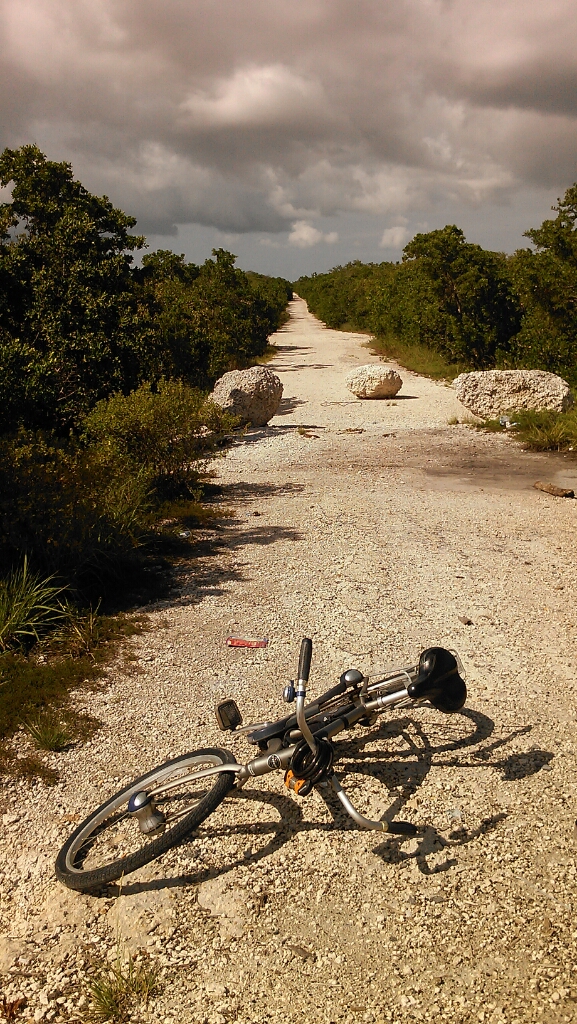 Once upon a  time internal combustion could get you this far as I wrote  in 2007 : 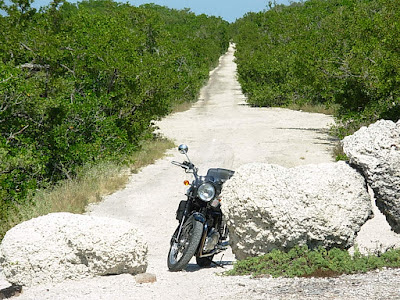 Starting back in the mid afternoon heat I paused in a shady spot for a moment to take a picture that looked like this: 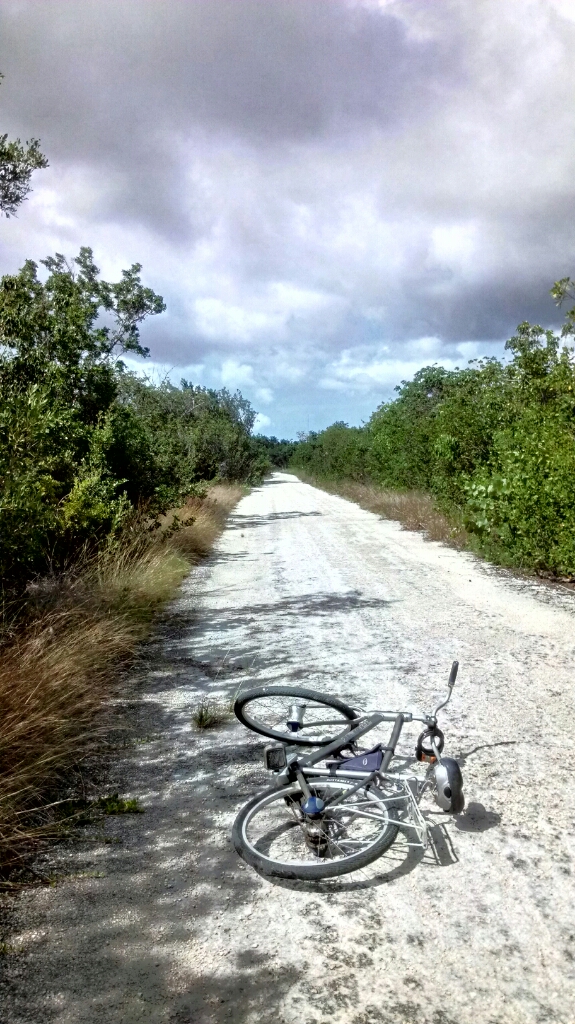 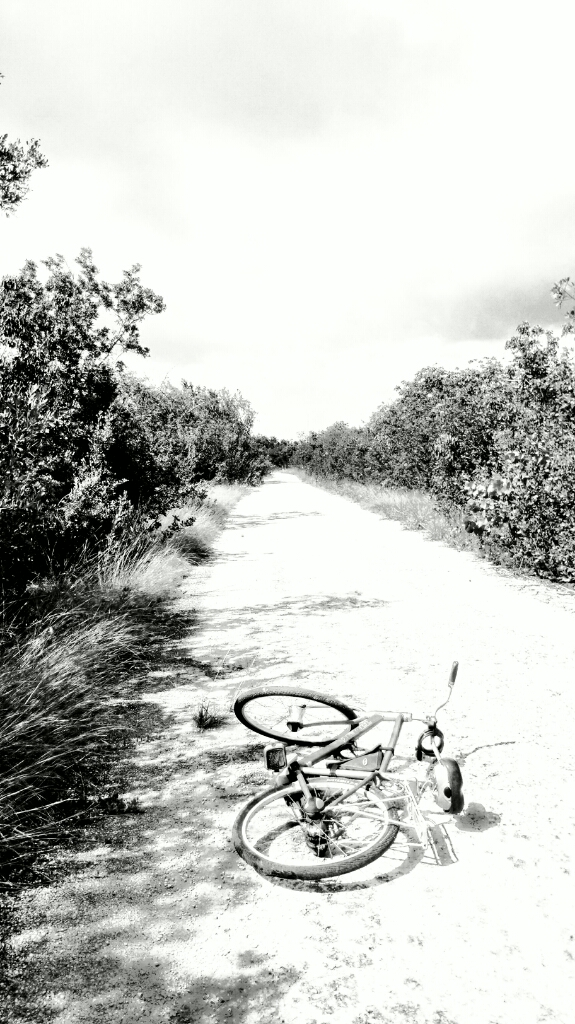 I really prefer walking to cycling but Cheyenne has been reluctant to come out on this trail in recent years, even in the cool of winter so as an exercise in getting some exercise this seemed a good destination for my bicycle. I did walk a bit just to enjoy the peace and quiet of not being in control of a vehicle for a short while. 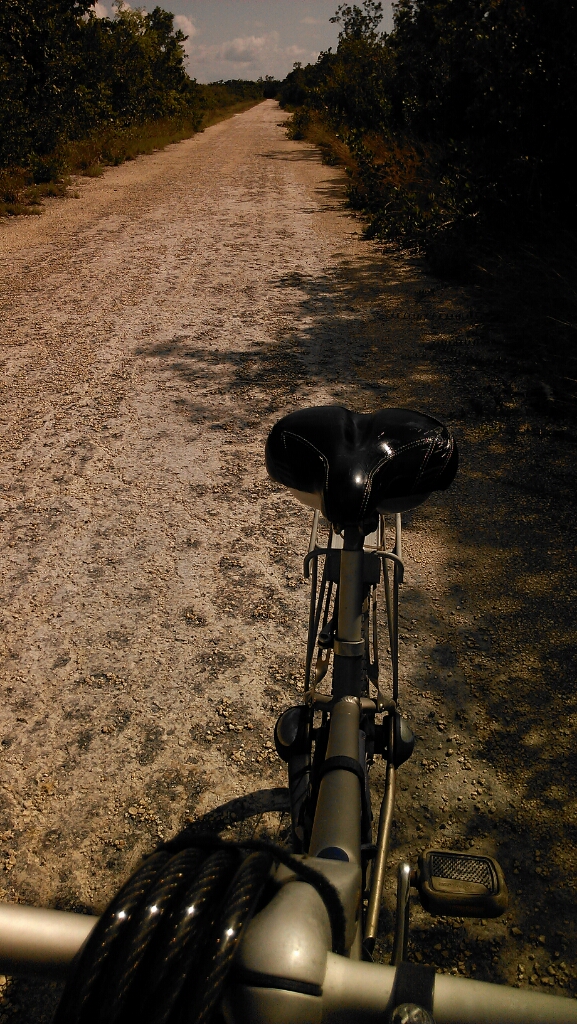 A friend sent me a few texts and I marveled at how connected we are, not a stunning revelation I know, but still the ability to be connected all the time in this age of electronic wizardry still catches me by surprise sometimes. 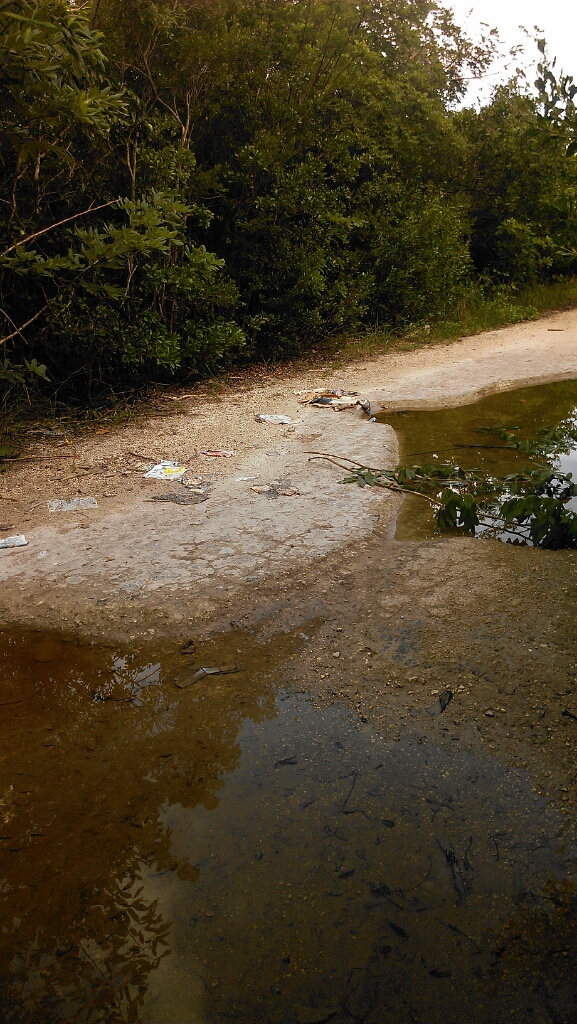 Here i was walking past a huge water filled hole in the track, surrounded by sodden discarded trash miles from any apparent neighbors and yet in my pocket not only did I have a phone, and several books but also a flashlight and a camera, a pocket calculator and an internet portal as well. 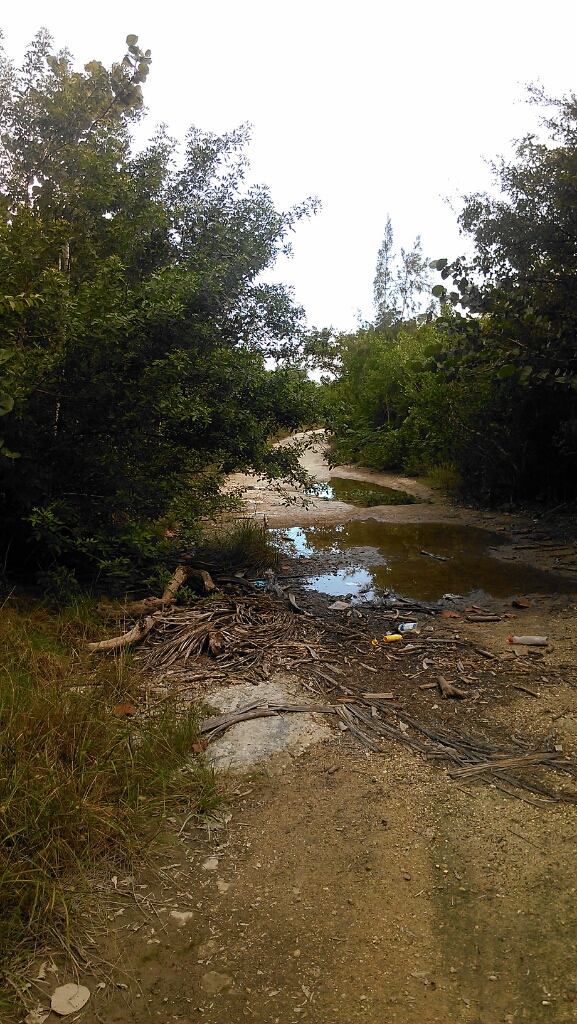 Humans have had bicycles - velocipedes - for more than a hundred and twenty years, two hundred if you don't need pedals and tires to count them as proper bicycles, yet I was born decades before a portable phone was even a possibility. I still marvel when I use it in any of its guises, from book buying to seeing my way in the dark, never mind taking and publishing these pictures. 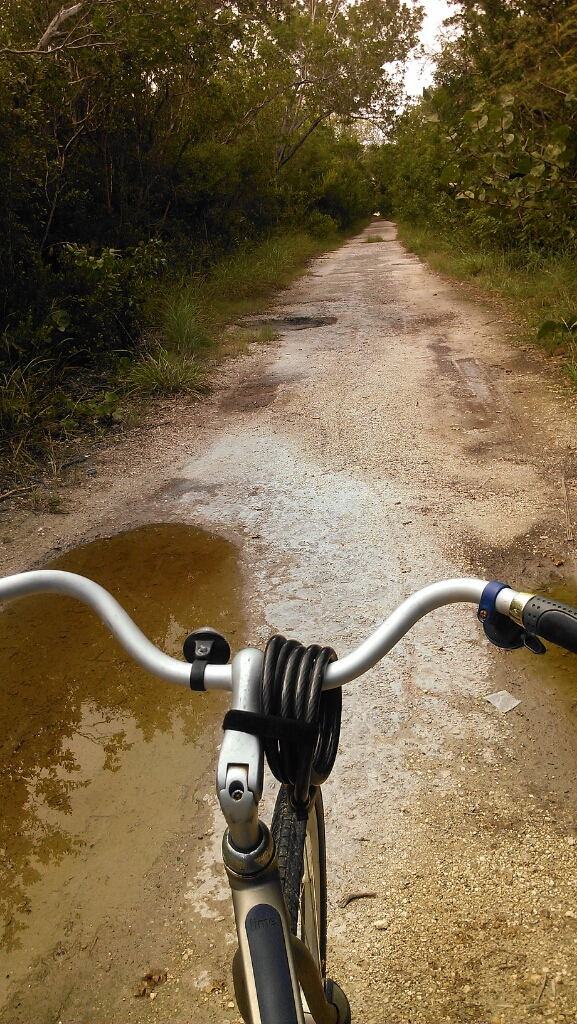 Trash is a constant companion, here a pile of apparently household items including a coffee maker and a purse rotting under the rain and sun. 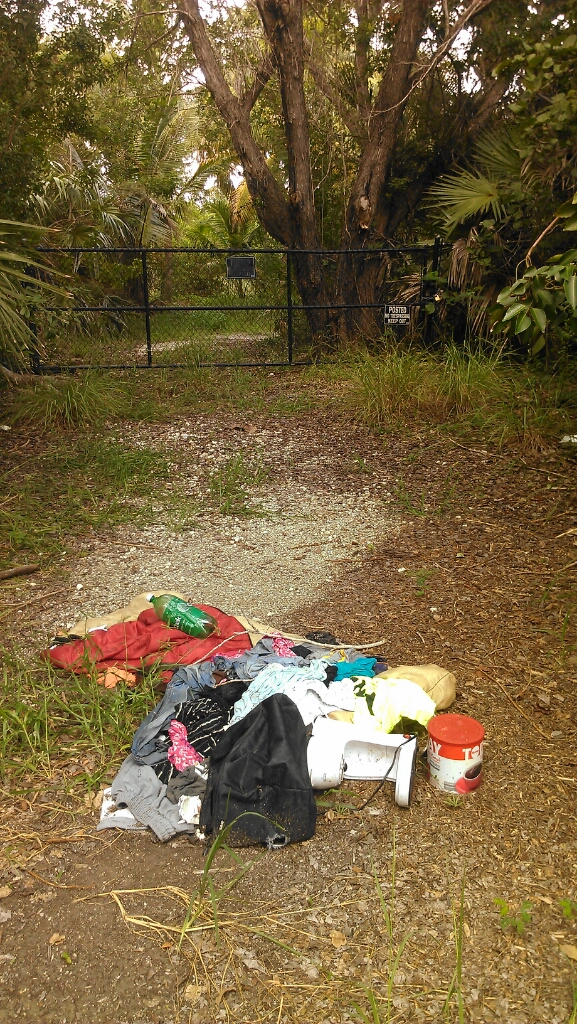 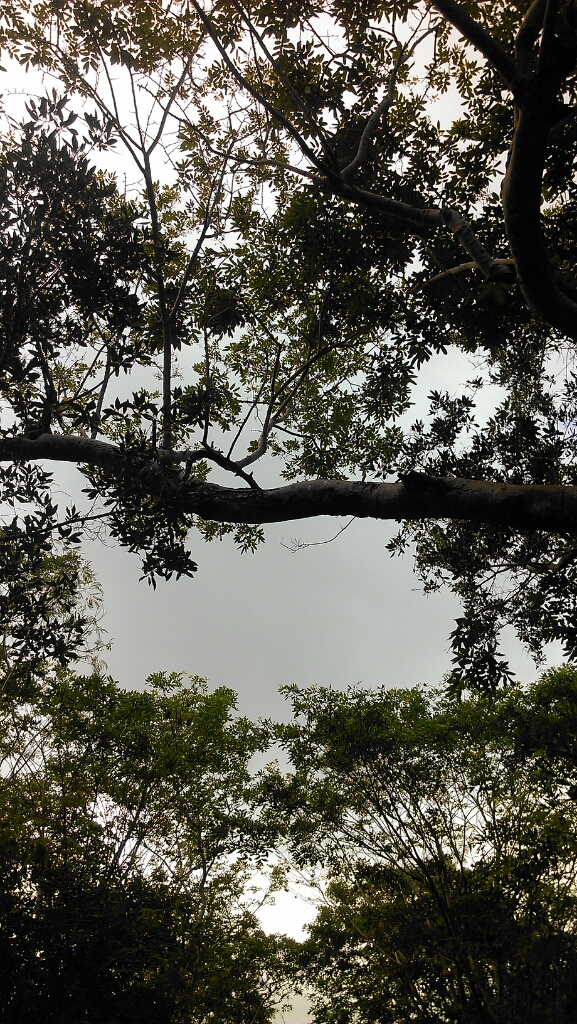 After getting off the dirt and back onto Highway One at Mangrove Mama's I turned east and crossed the bridge to Cudjoe and found myself on the newly  built section of the Overseas Heritage Trail. 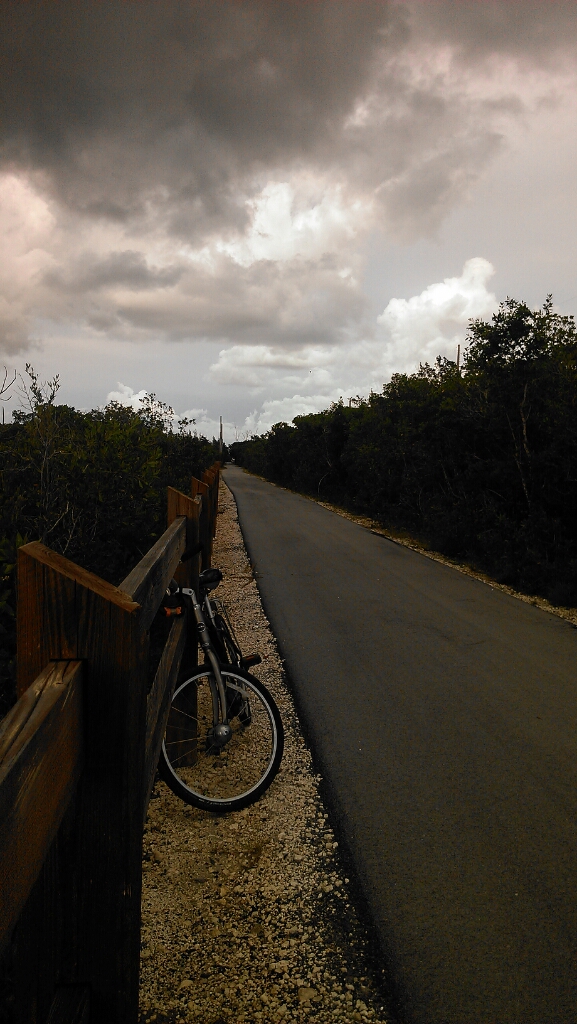 Overseas Heritage Bicycle Trail is the page with all the information about the trail that will one day connect Key West to Key Largo, all 106 miles of it. And at least on Cudjoe Key they've done a really nice job converting the old Highway One roadbed into a partially shaded path separated from the modern roadway by a tall thick hedge. 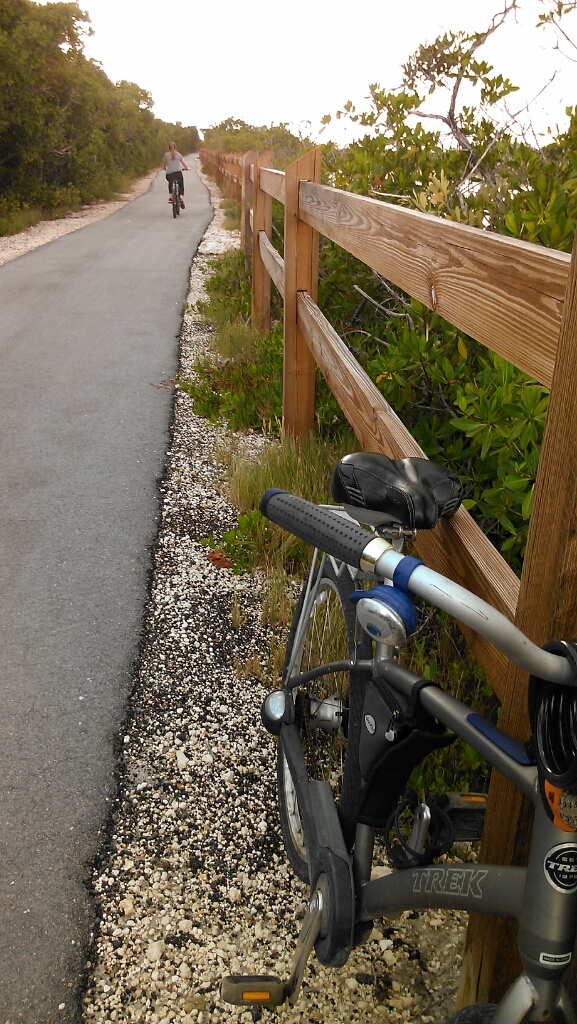 The views are quite spectacular. 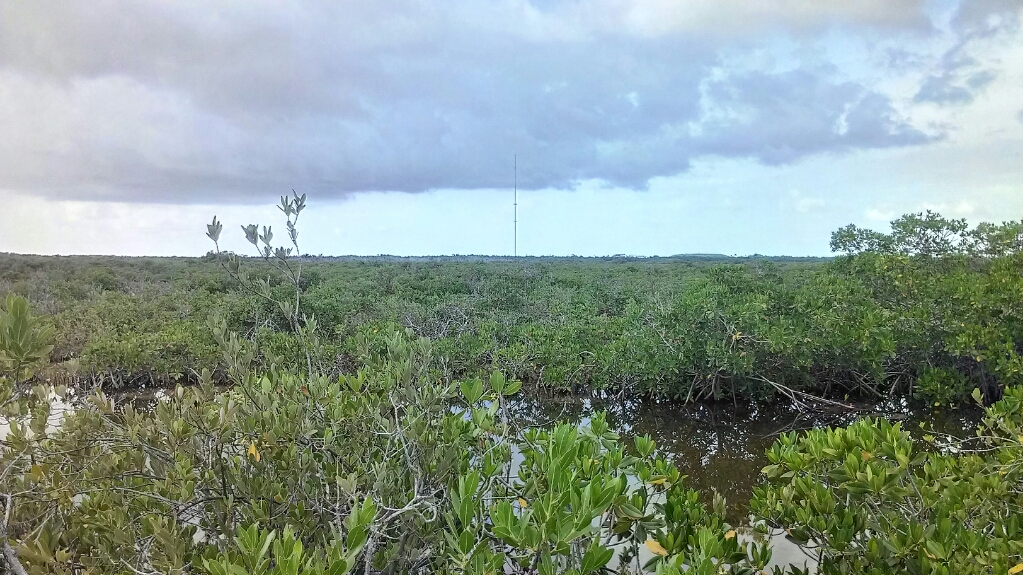 And where the trail crosses a street its separated from motor traffic. It crosses Highway One at open crosswalks which in winter require a fair bit of patience as traffic is heavy. 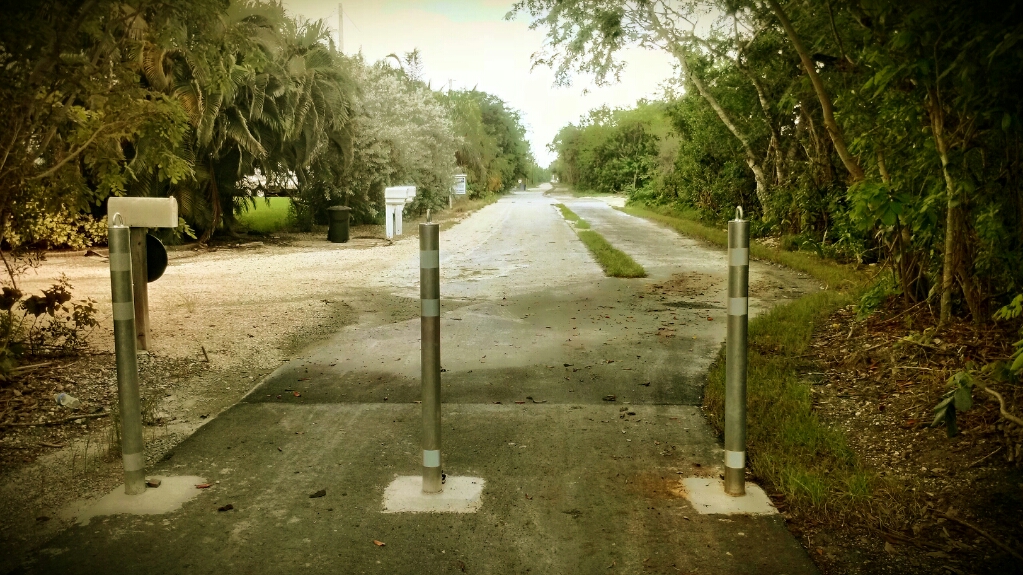 Across the highway from Pirates Wellness Center (closing this month for ever unfortunately) the bike path is separated from the local access road by a  stout cement median, no expense spared: The trail is a mish mash of solutions, and not all islands have this level of separate facilities. Not all the old Flagler bridges have been turned into bike paths unfortunately so sometimes bicycles have to ride on the shoulder of the Highway. 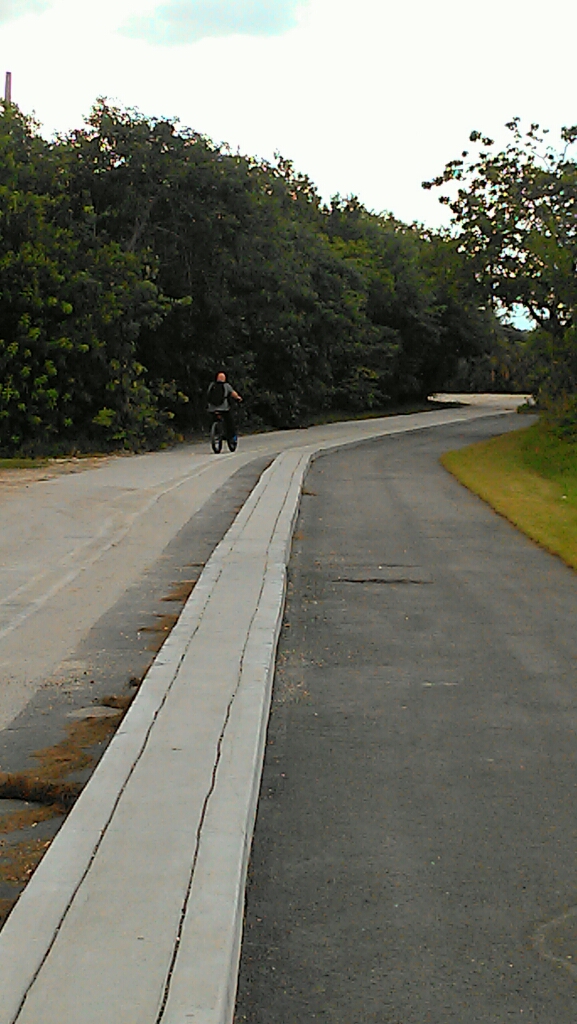 However around here this new trail makes riding quite a pleasure. 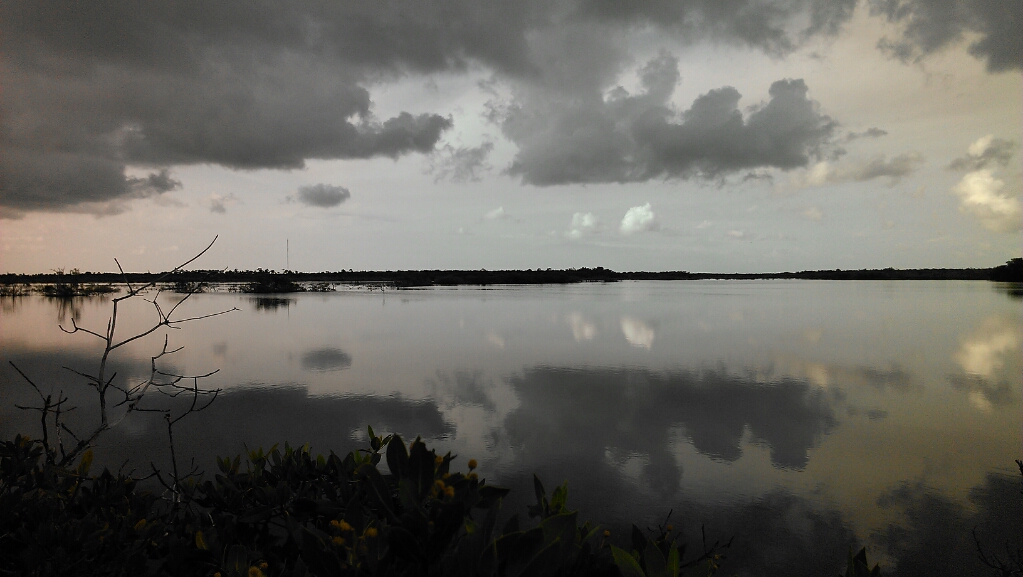 And by the time I got home I was ready for a shower and a nap. My dog, abandoned for two hours had other ideas so after I parked the Trek I had to load up the Labrador for a walk. At least she enjoyed it. 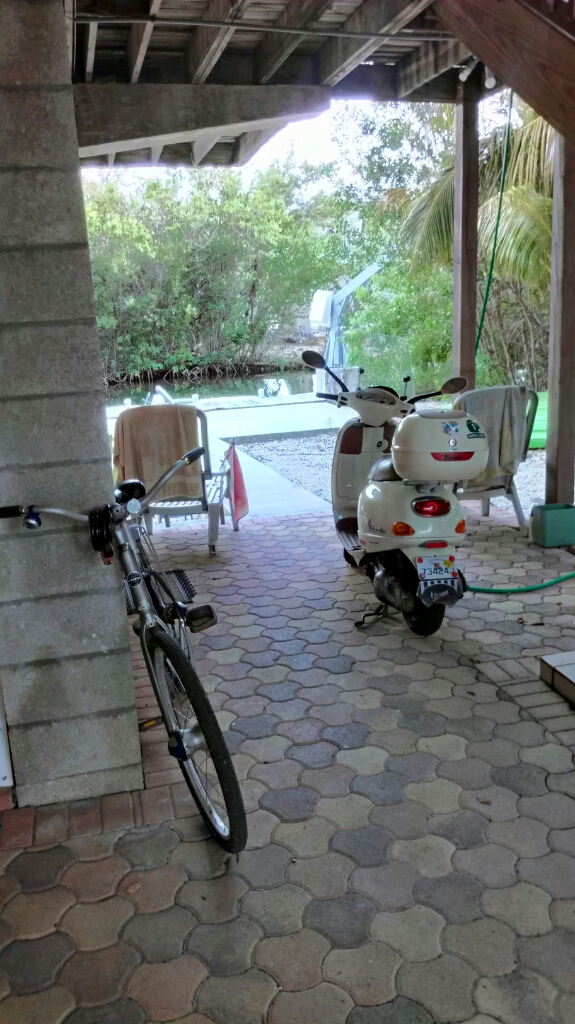 And then it was all too soon time to go to work. I am lucky I love night shift as I can still take full advantage of daylight the nights I work.