This was a long day of huge contrasts in our drive south. We left our truck stop in Guaymas yesterday and took the expressway south which is  labeled 15D. In Mexico highways labeled with a D are toll (“cuota”) highways. We paid about $15 (US) for the drive from Guaymas  to Novojoa where we turned inland to visit the mountain town of Alamos (“poplar trees”). 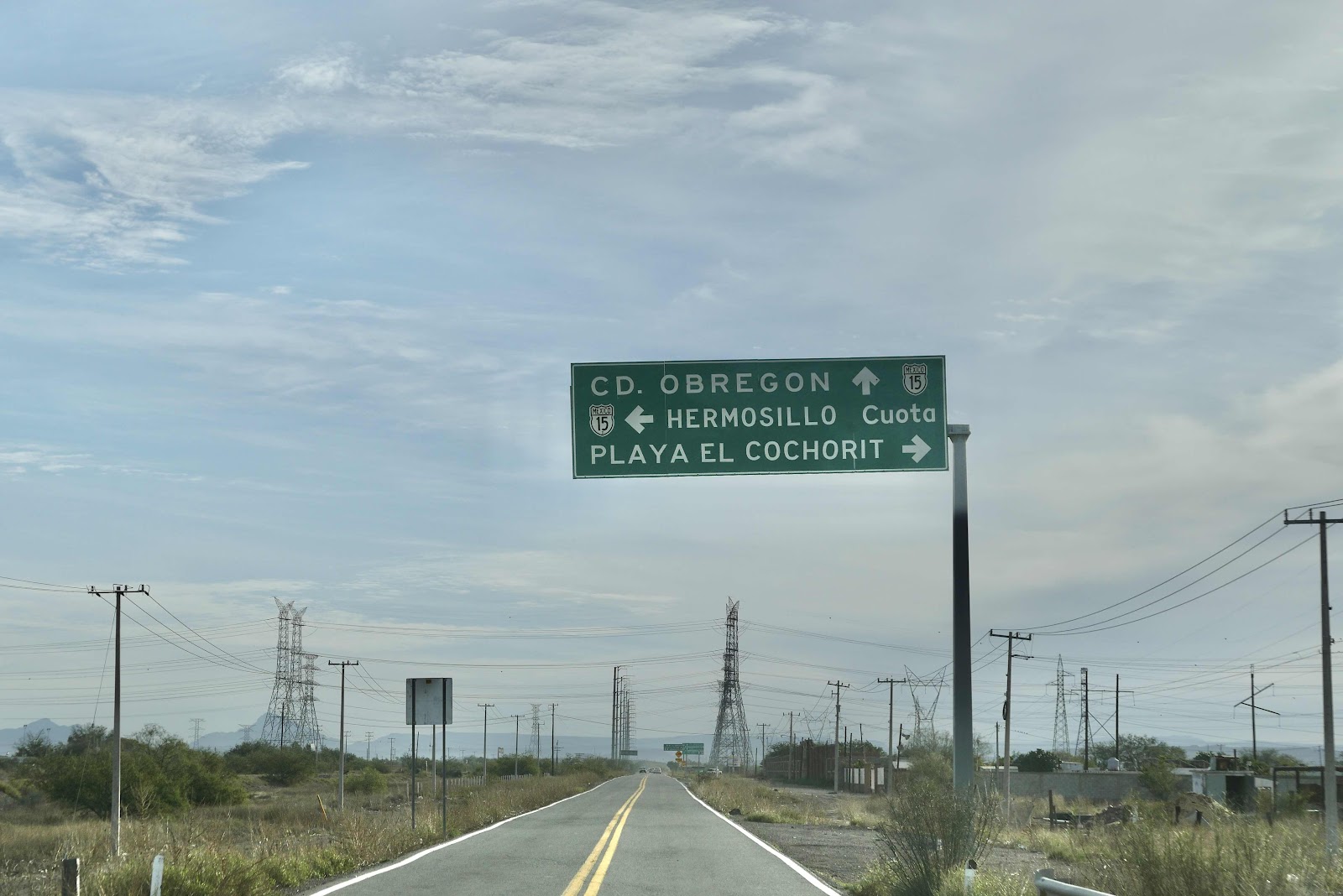 You might imagine that a toll road charging real money gives you access to unimpeded progress. Forget that. Much of the drive is smooth four lane with shoulders and guard rails and fenced to keep out livestock. Then out of nowhere you meet the real Mexico in the middle of the superhighway: 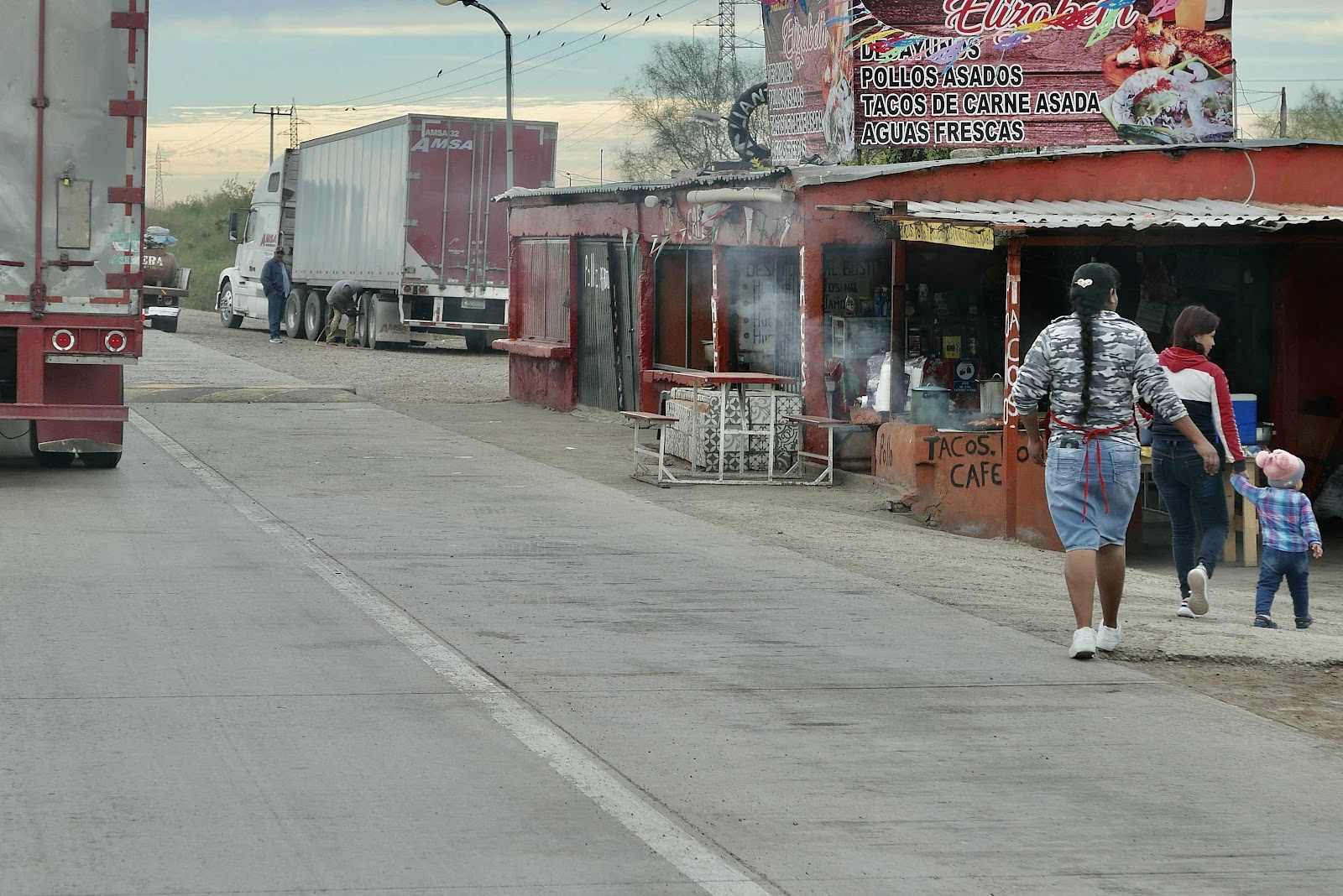 And those goddamned topes (“topays”) show up suddenly to rattle your inattentive bones. In some spots local entrepreneurs gather at the speed bumps and offer local delicacies to make a buck.  We got some super spicy chilis from a guy in a wheelchair and a Dulce de Leche ( goat milk caramel) disc that my wife limited to just one as I would have eaten them all day. My sweet tooth. 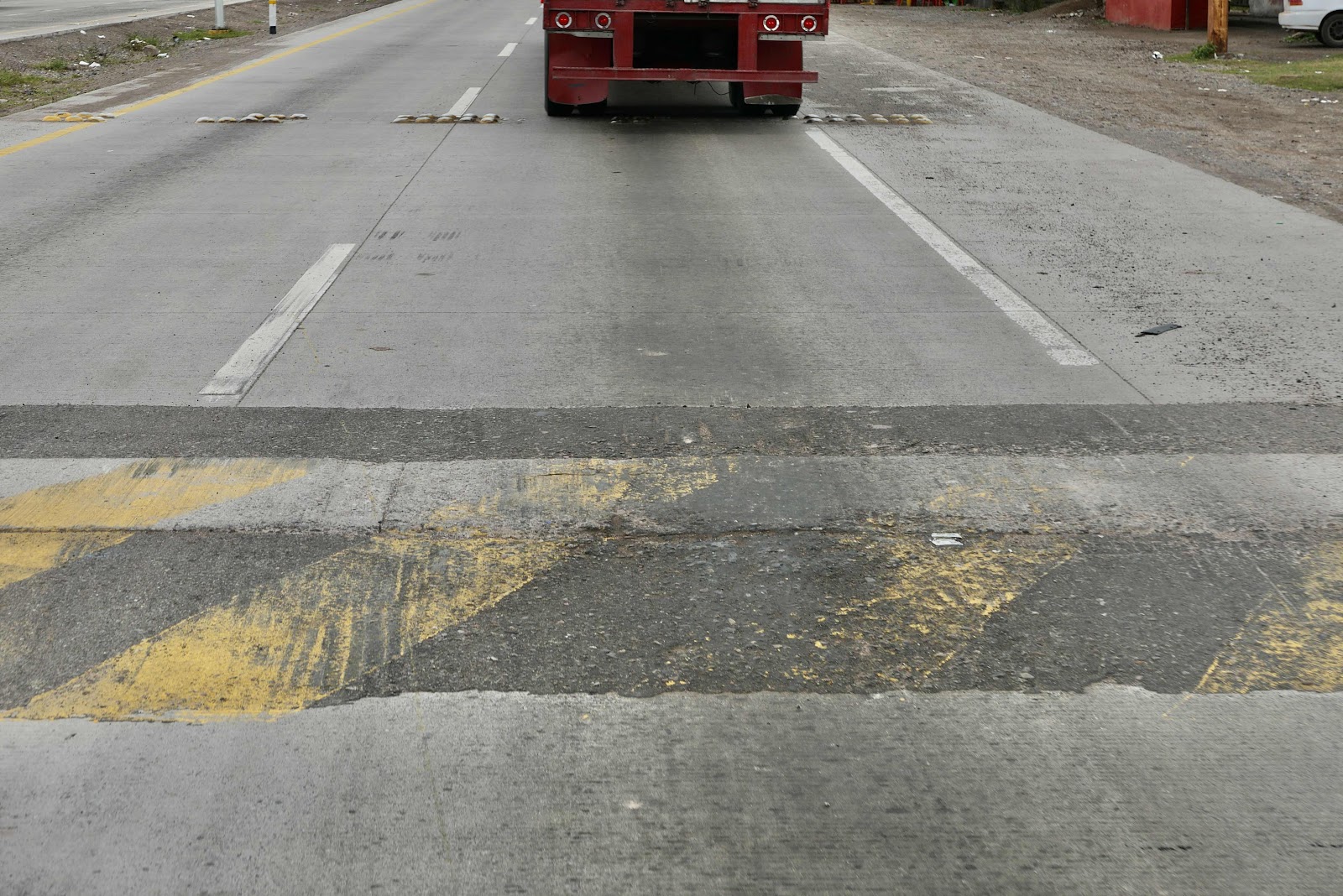 Navojoa was a dusty industrial town full of potholes and weaving motorcycles but it was the junction for the road east into the hills. I had imagined the drive to Alamos to be a winding mountain route full of hairpin bends and vast canyon views  through lush tropical foliage. I was a bit wrong on that! 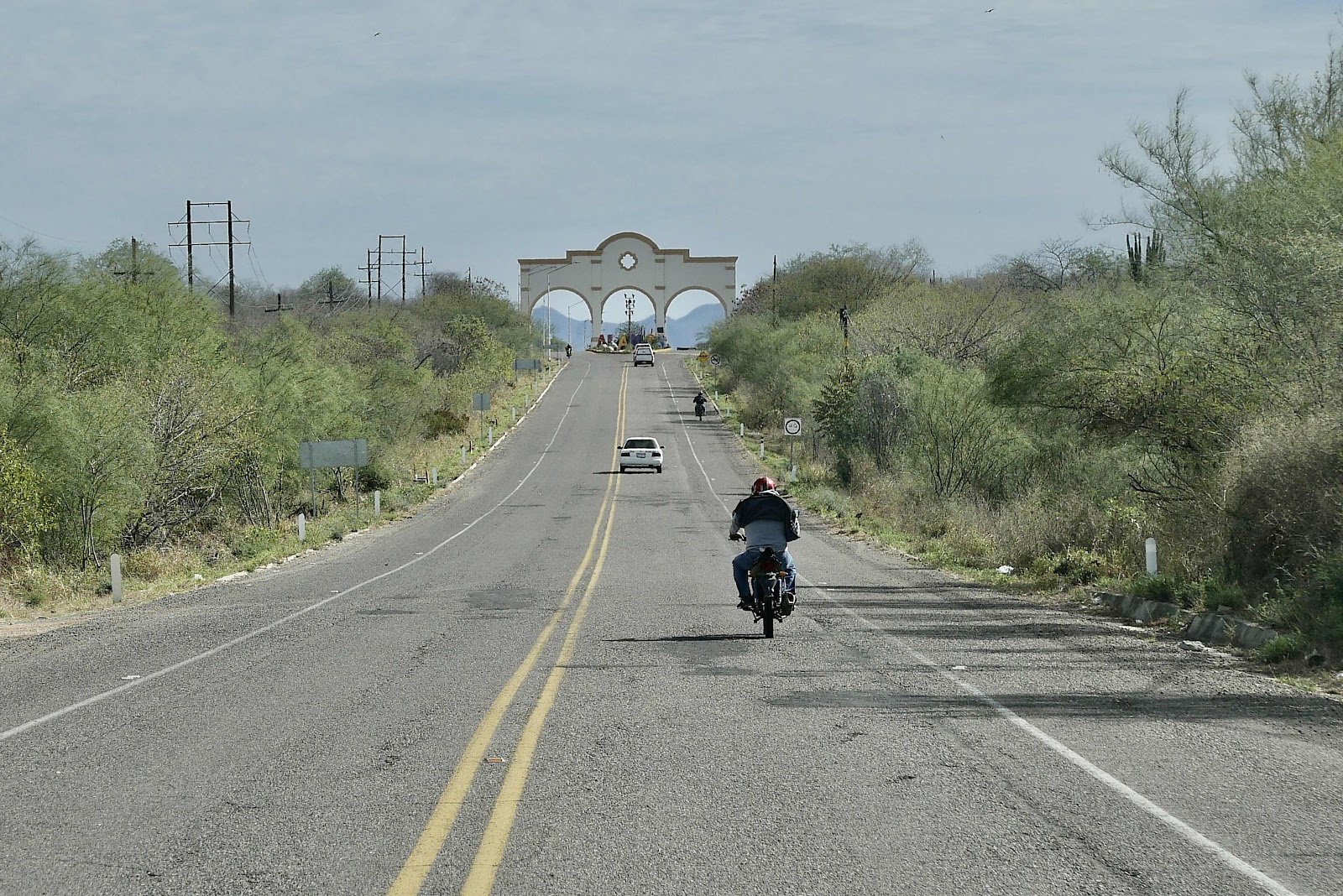 In fact the road was long, 35 miles long, straight and rose only  imperceptibly into the hills such that it was still 81 degrees warm in town and felt hot and dry. Sure enough it was a pretty town. 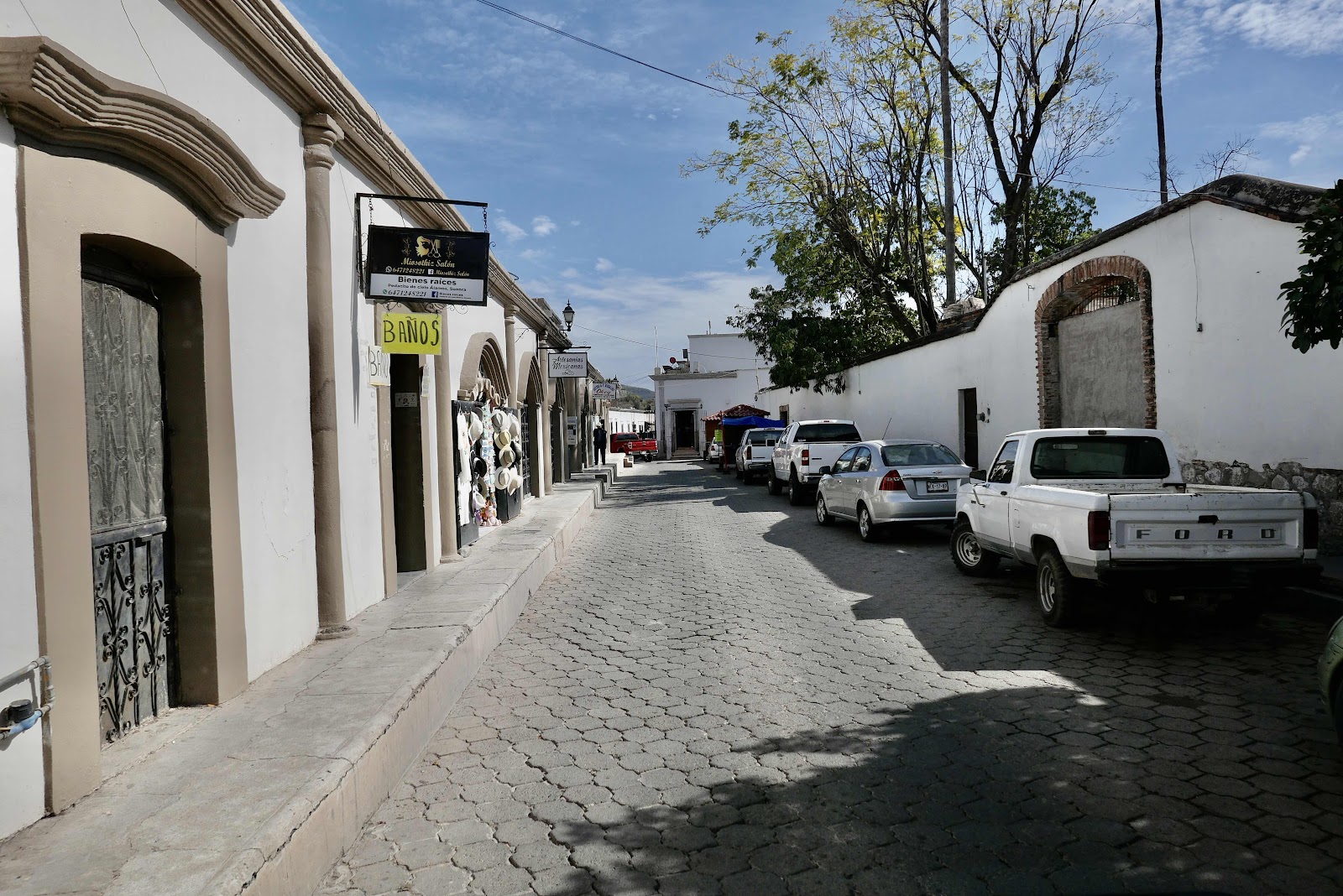 The weird thing about Alamos is how the city feels. We drove through and could find no city center, no cathedral no plaza no central shared space. Beyond that every business related to food seemed closed. The food sellers on the street were closed, restaurants had their tables piled up and no sign of life. My fantasies of sitting at a sidewalk eatery were dashed. 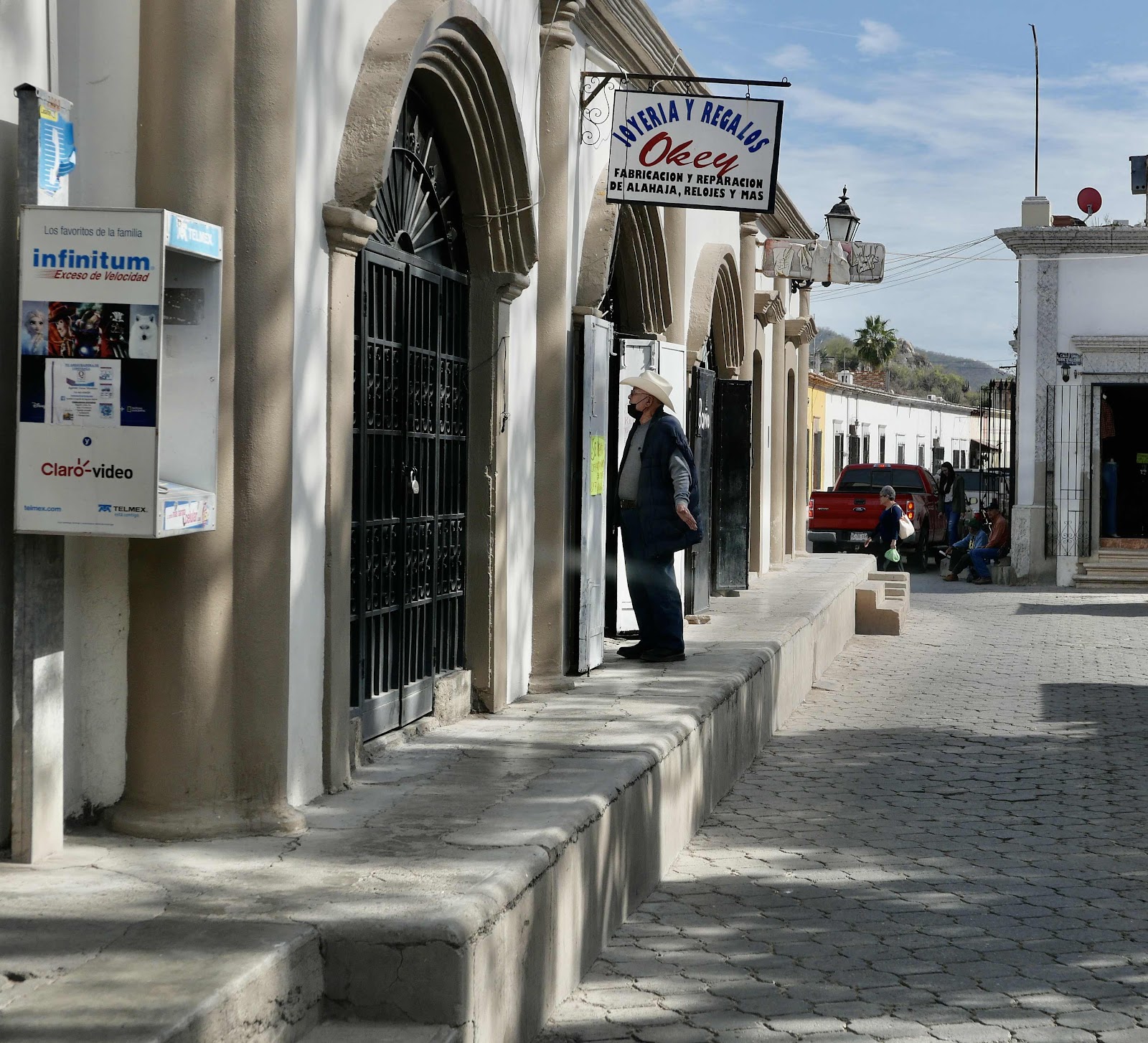 The streets were fashionably narrow but I got the Promaster through most of them without a problem. Sometimes I wondered if I had missed a one way street sign. Once I had to back up to make room for an an imperious executive driving a Coca Cola company microcar. I should have driven GANNET2 over him. 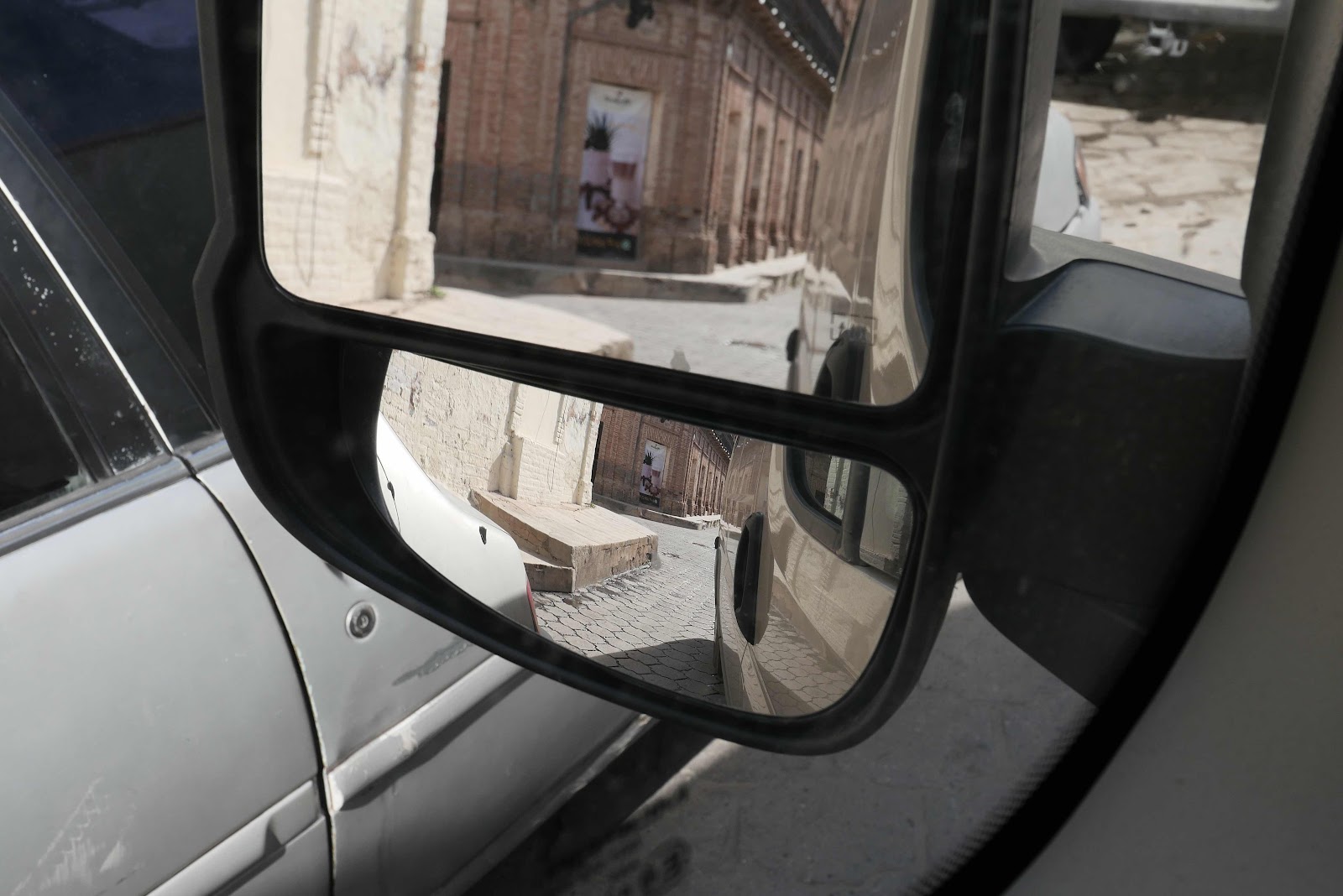 It was a pretty town but we couldn’t get a grip on it. We walked Rusty and then pulled over to eat at the Gannet Cafe. Layne made delicious avocado and deli meat sandwiches with the German bread from San Carlos. 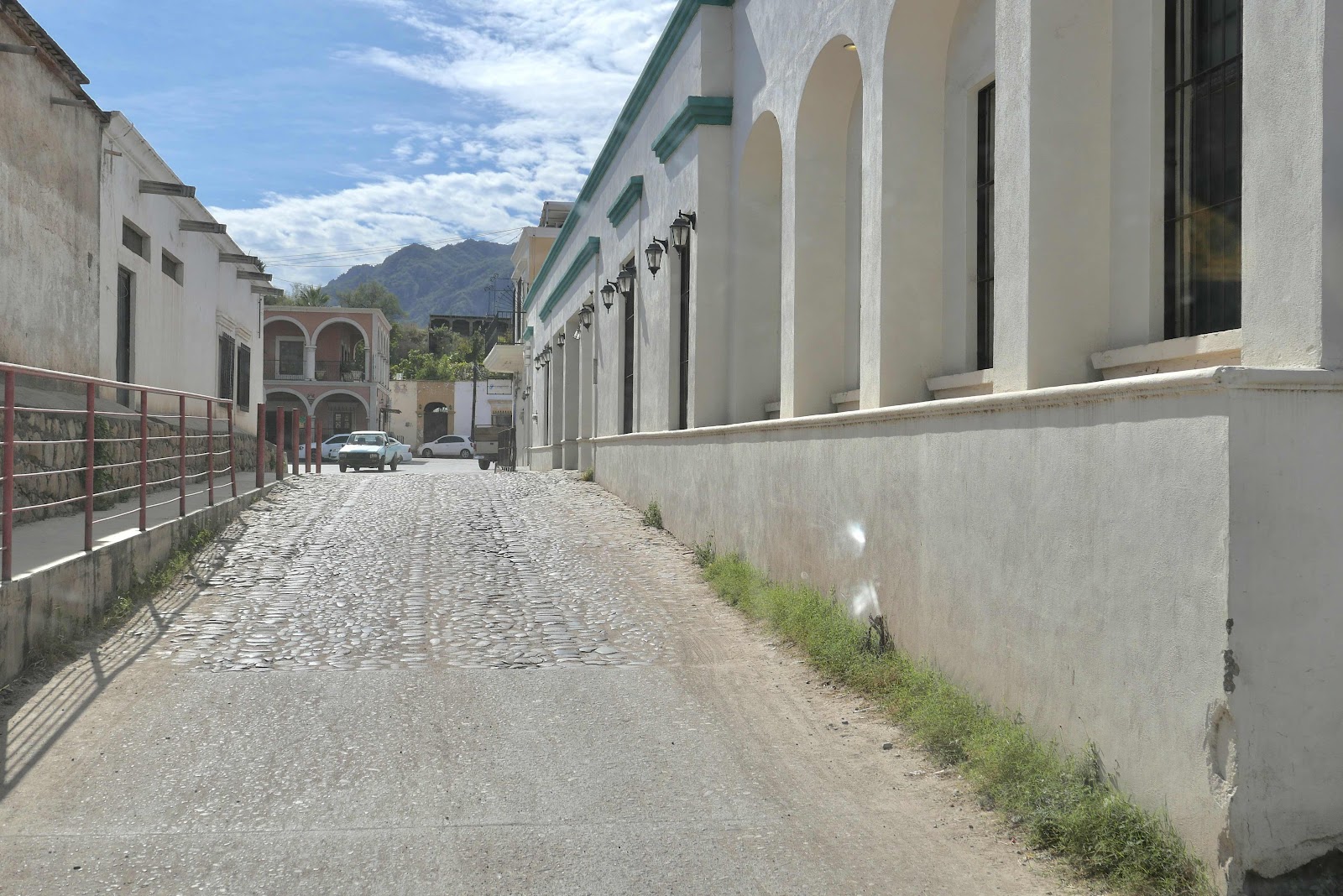 That was when a young man on a motorcycle pulled up. Layne was not happy. I had left her to walk Rusty while she made lunch and in that time three teenagers came over and started harassing her for money. She saw them off in Spanish a skill that shocked them but left her feeling like Alamos was a total dud. 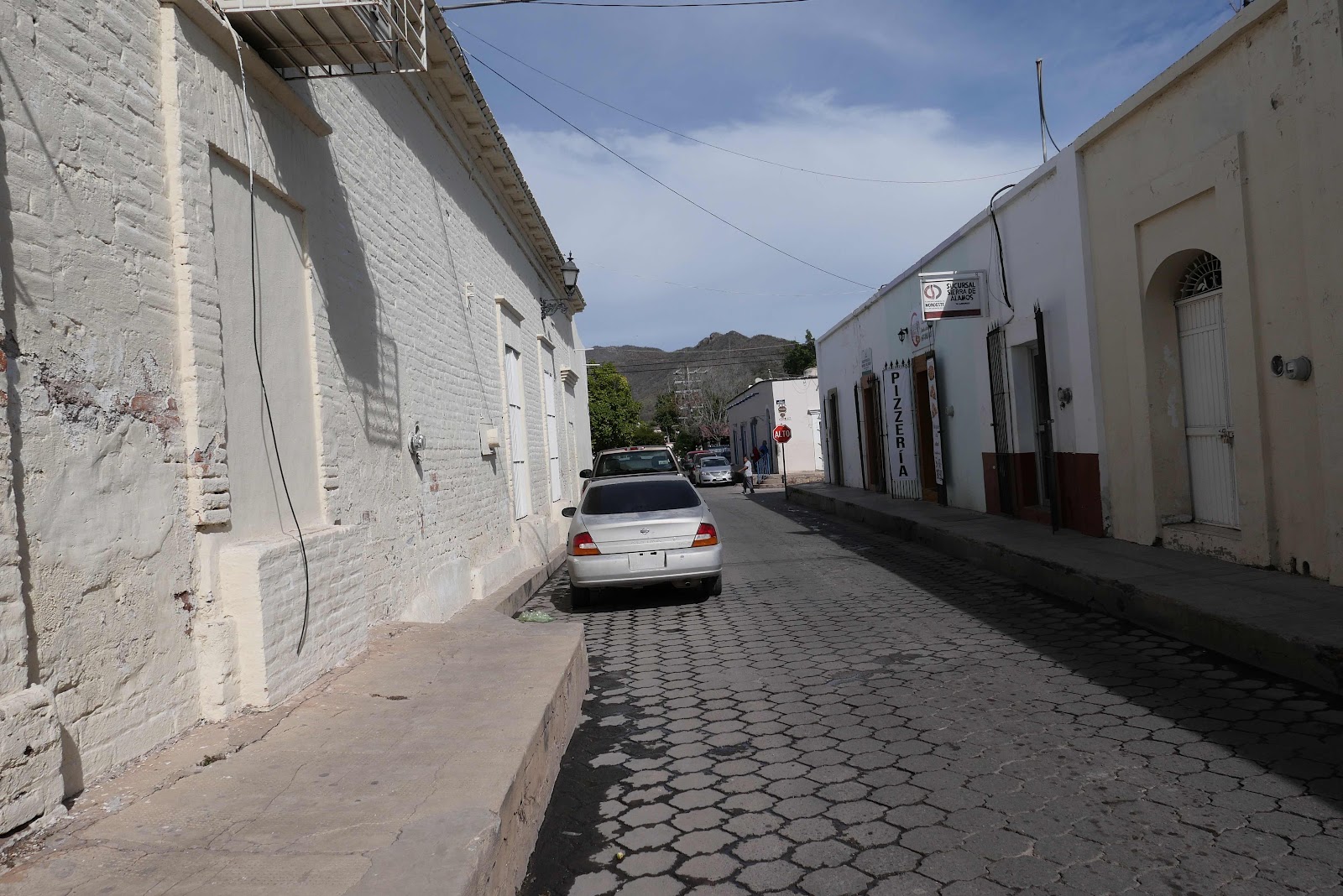 The young motorcyclist riding a nice clean Honda 150 dual sport admired the van and asked about the vehicle saying he was curious and wanted to do the same. He worked his way into a conversation despite our reticence. Nestor proved to be a really nice genuine guy. 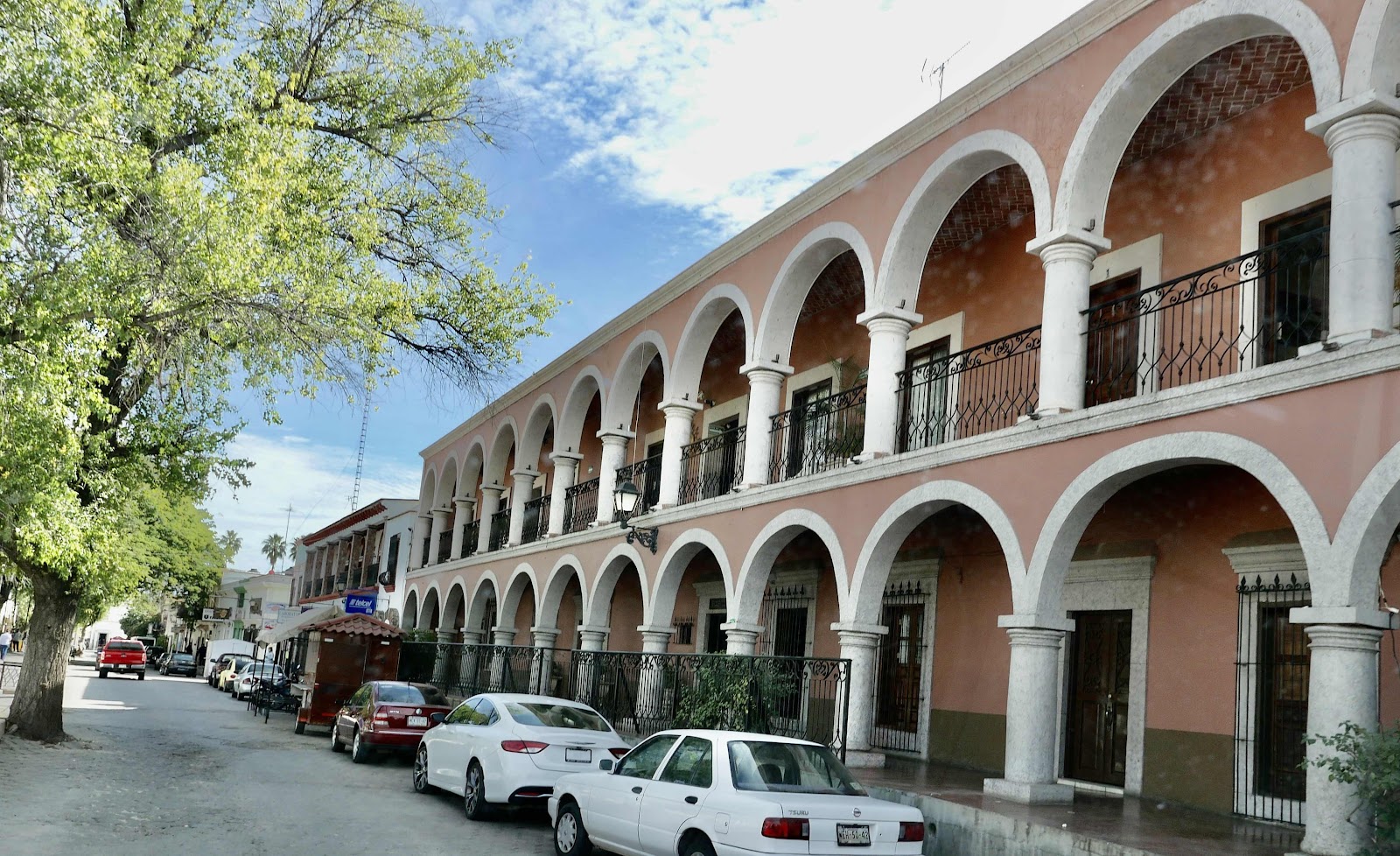 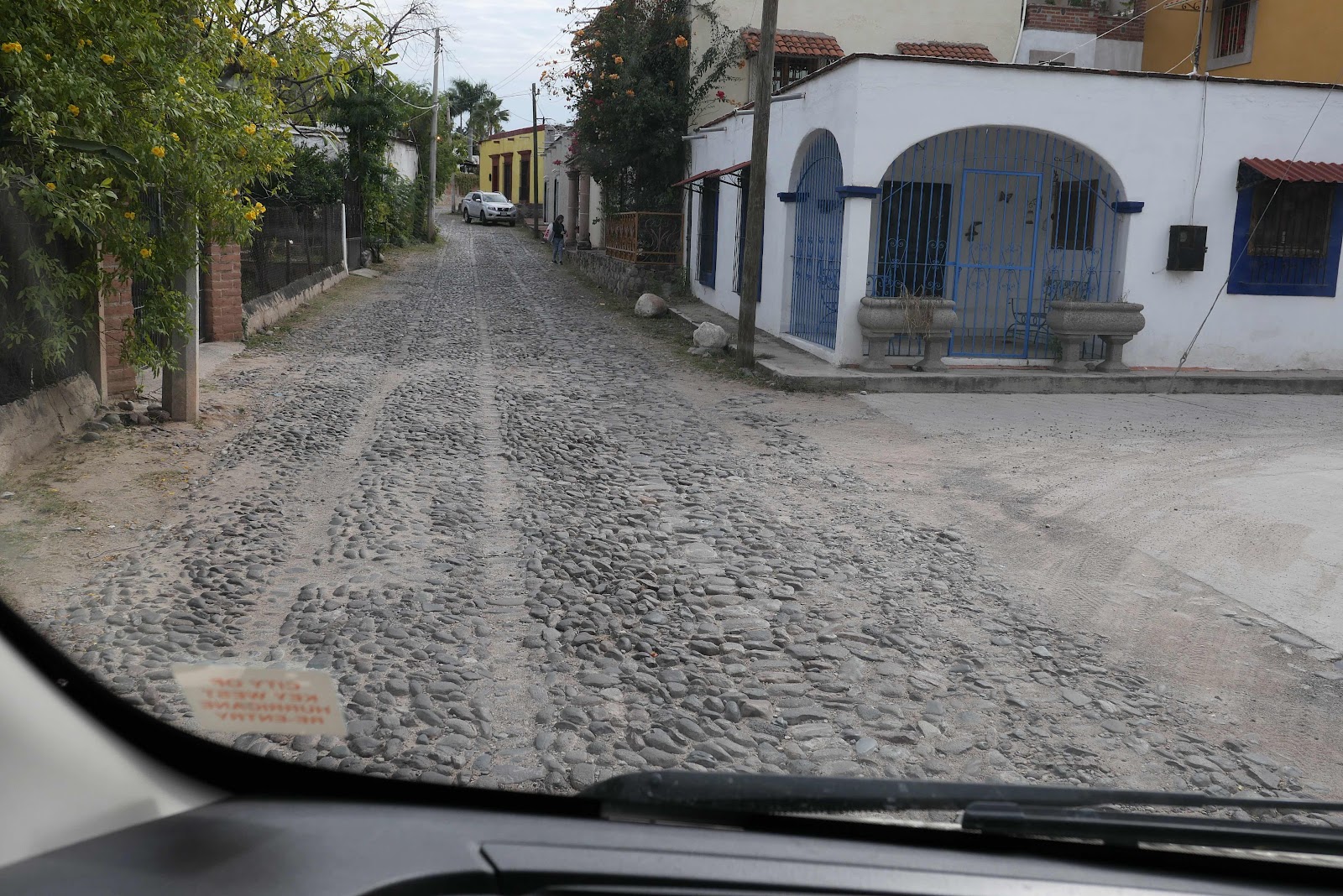 He was also a town booster promoting Alamos which was a bit awkward for us but he managed to turn us around. Check out this park he said and take your dog for a walk. He offered to show us the way. 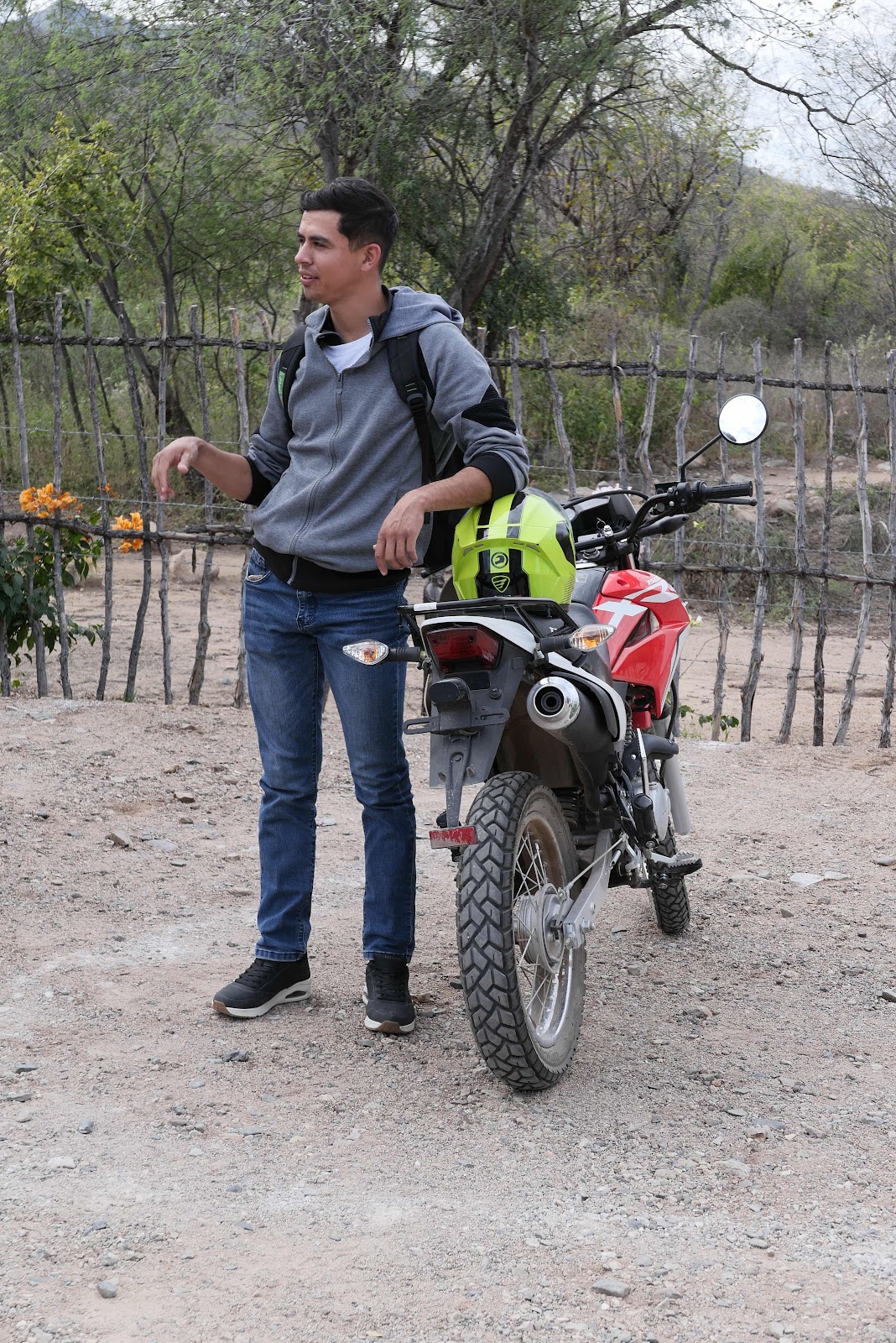 Nestor said good bye and we set off. It’s dry season so the greenery is hibernating and the trail was dusty but it was a relief to be shambling along, alone in the park. 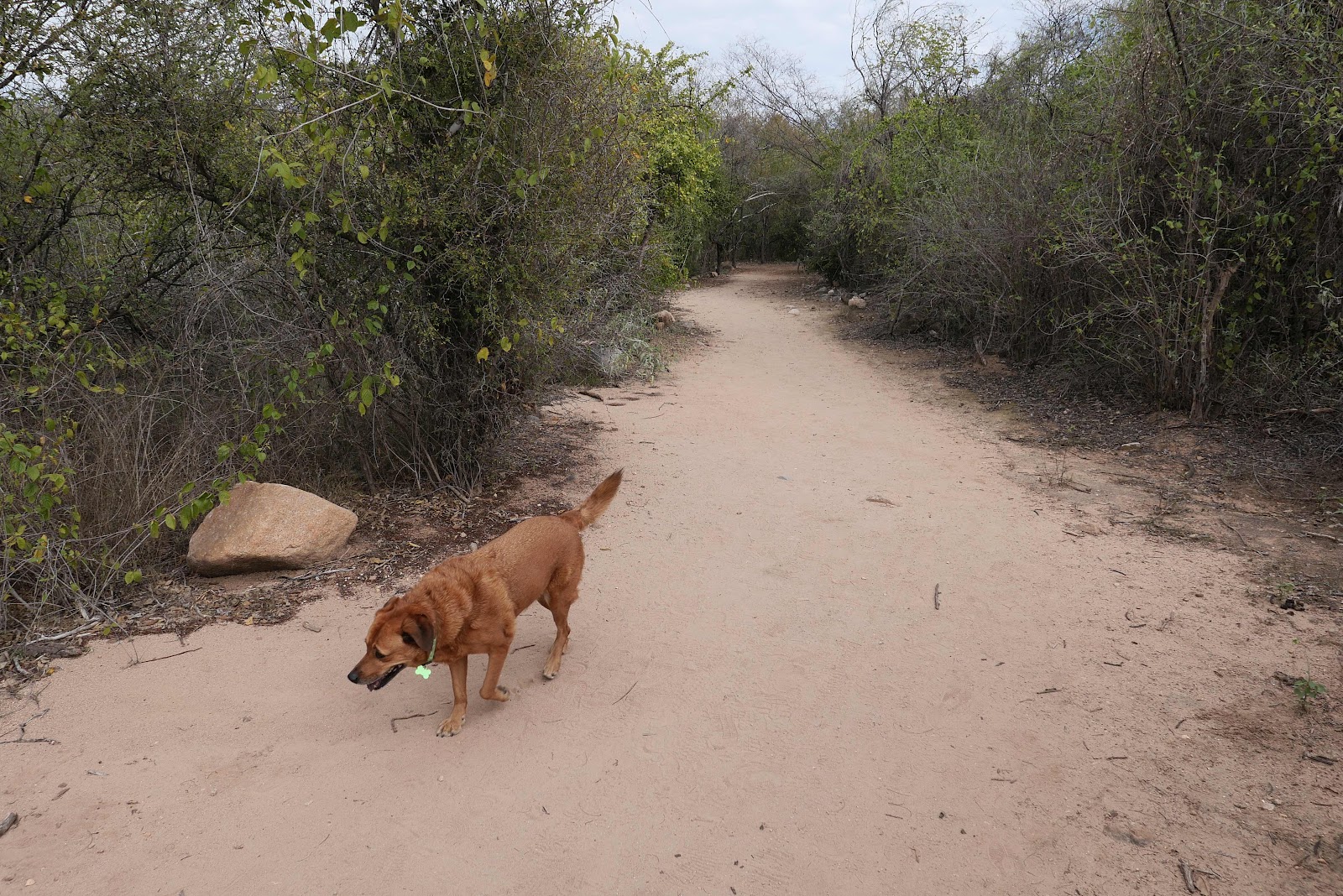 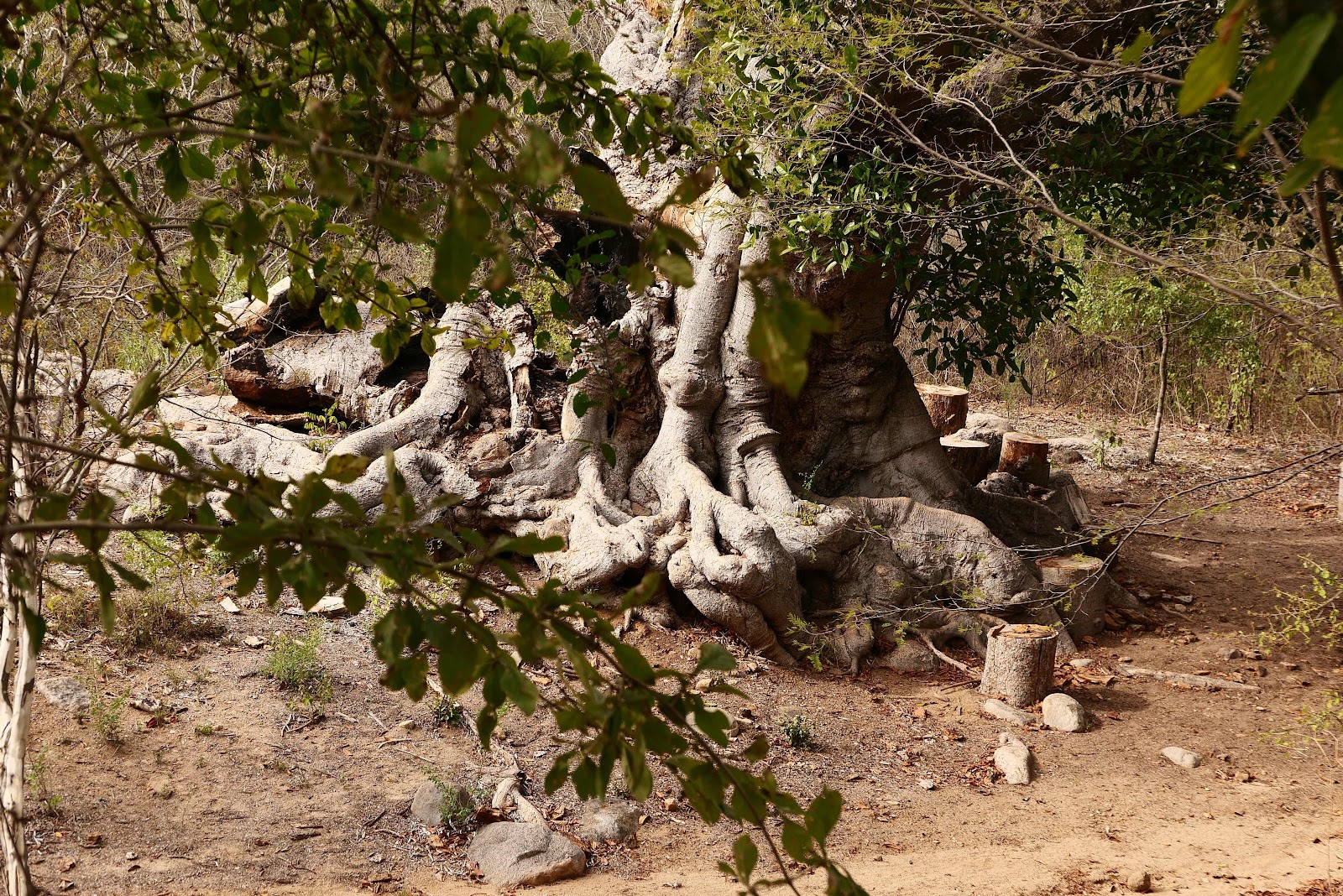 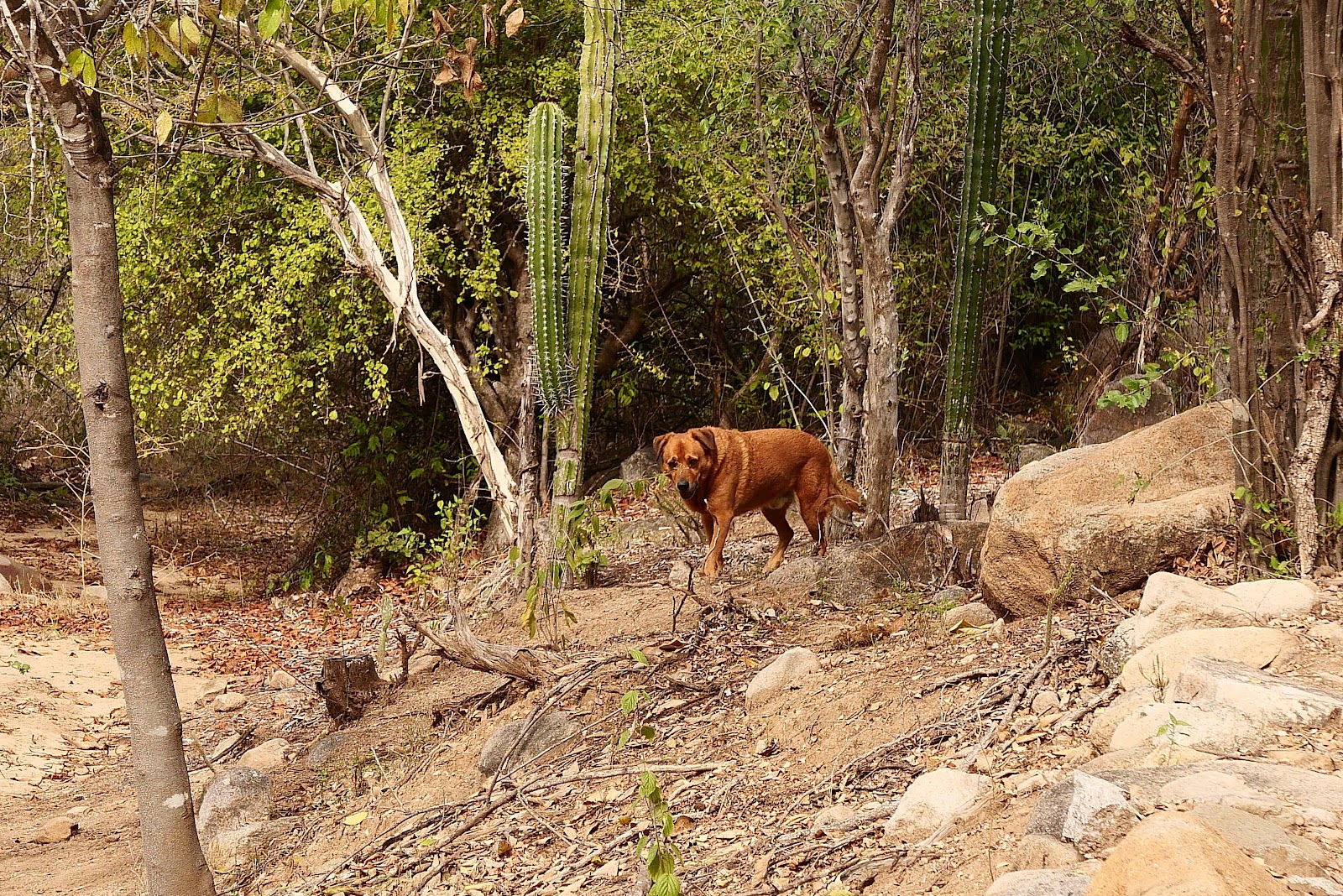 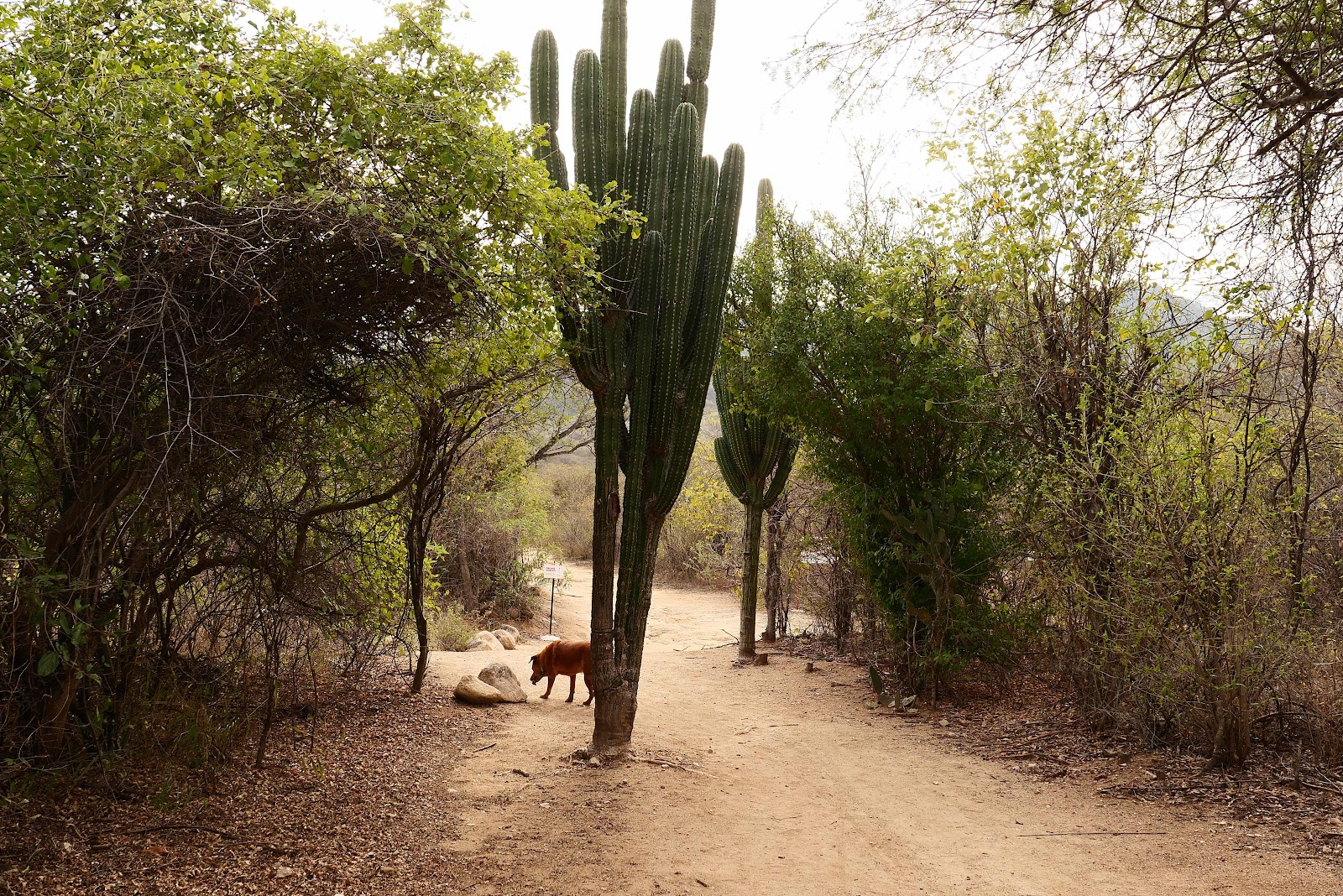 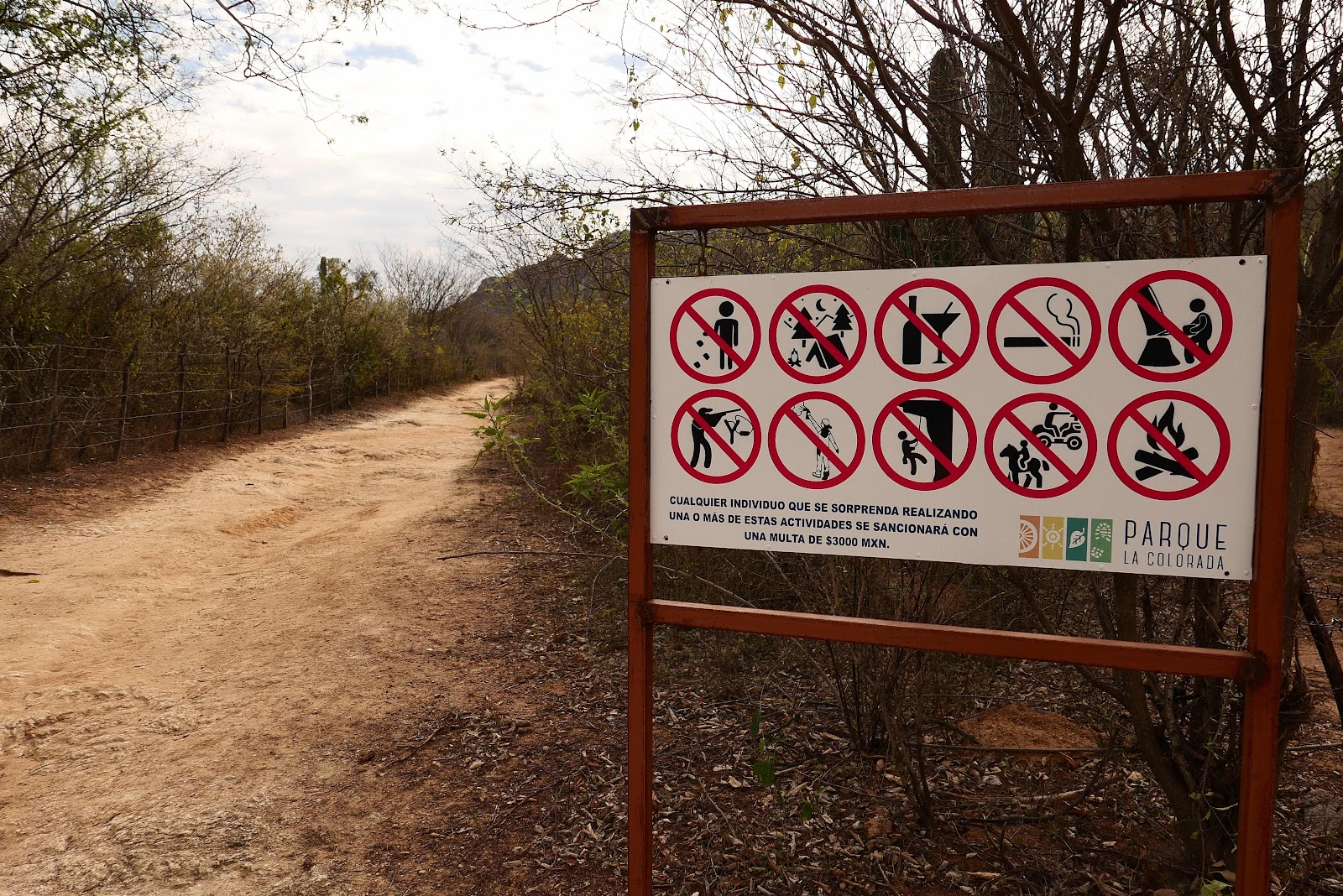 Watch out! Trail shared by hikers and cyclists! 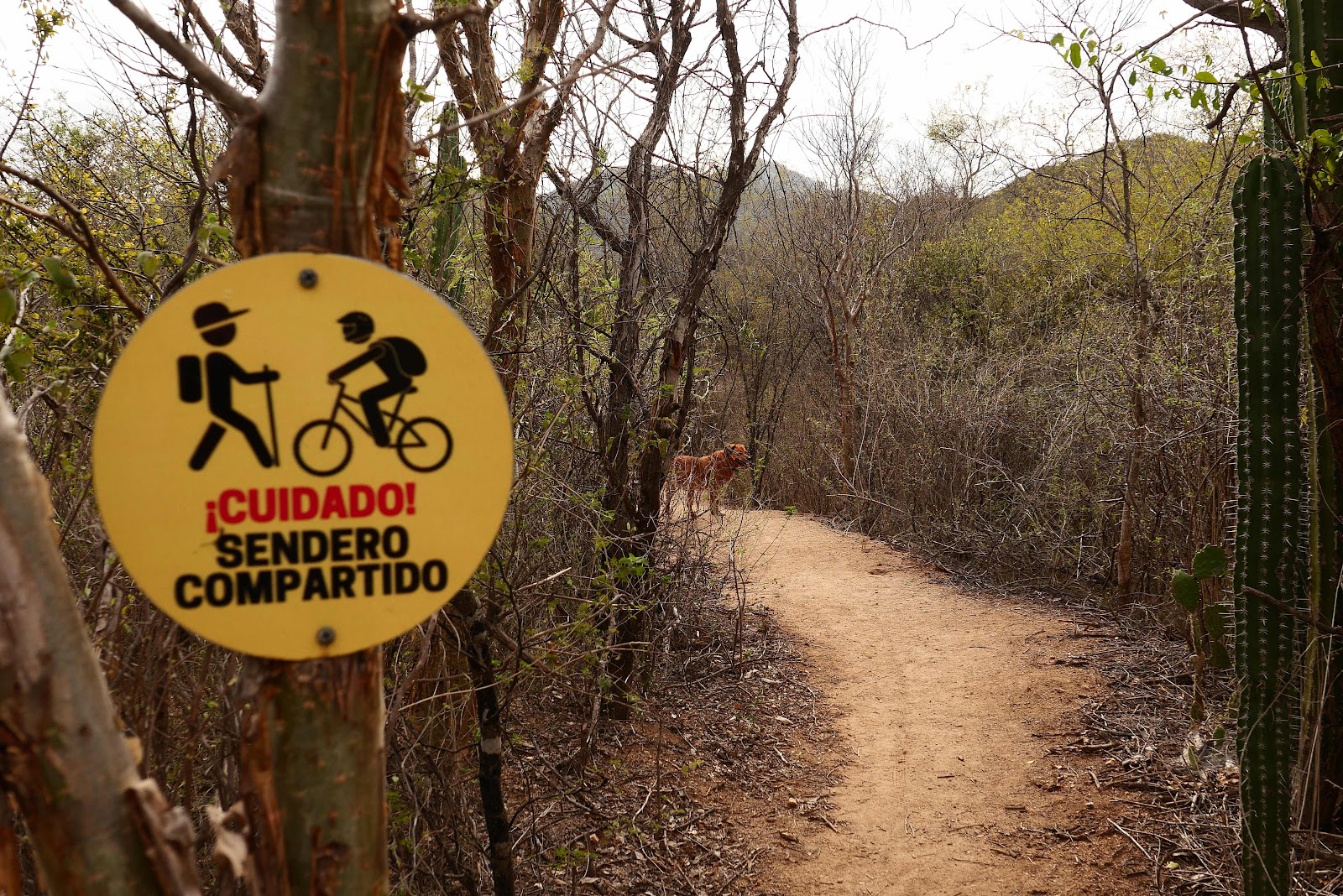 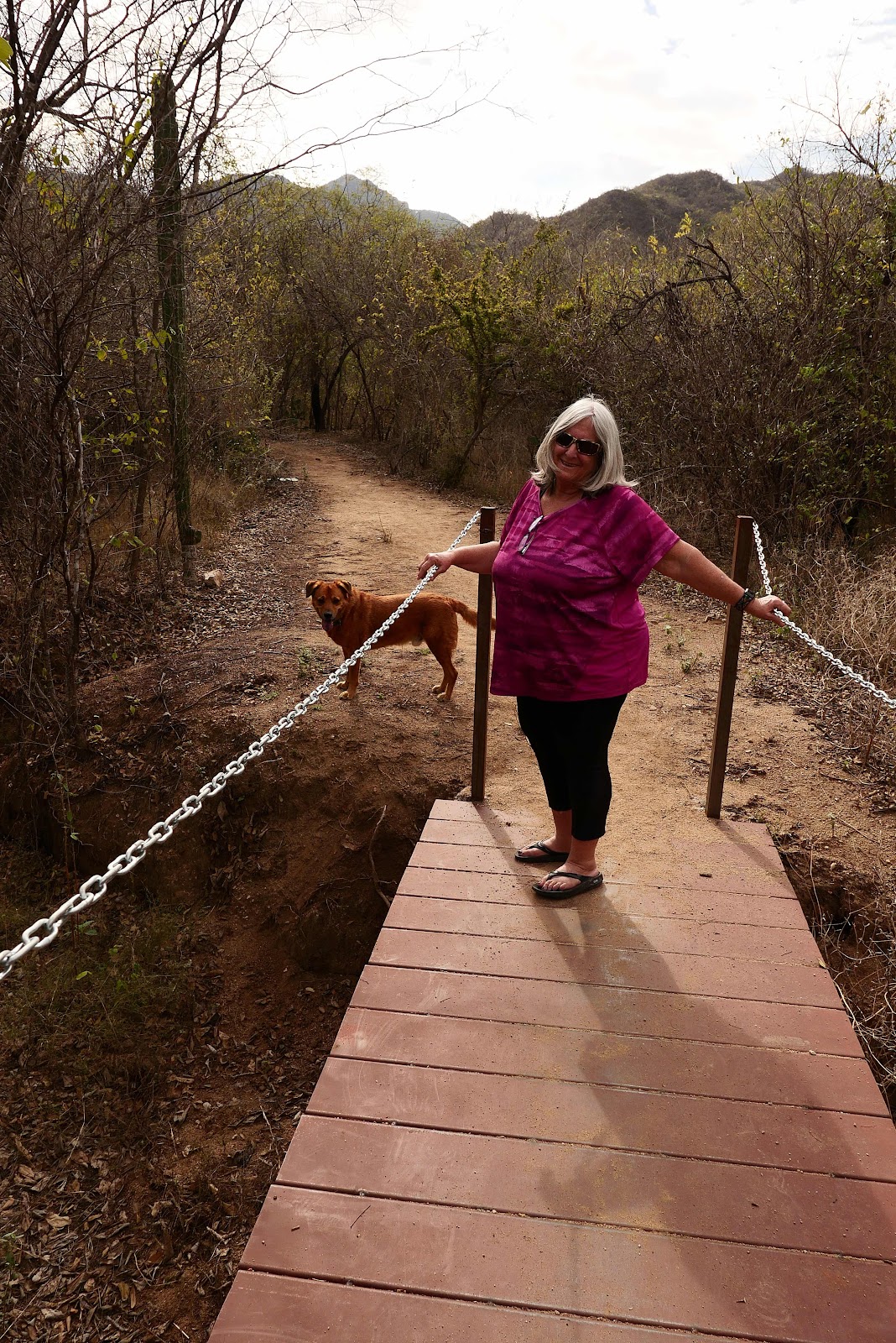 They put some effort into this place. Pretty impressive. 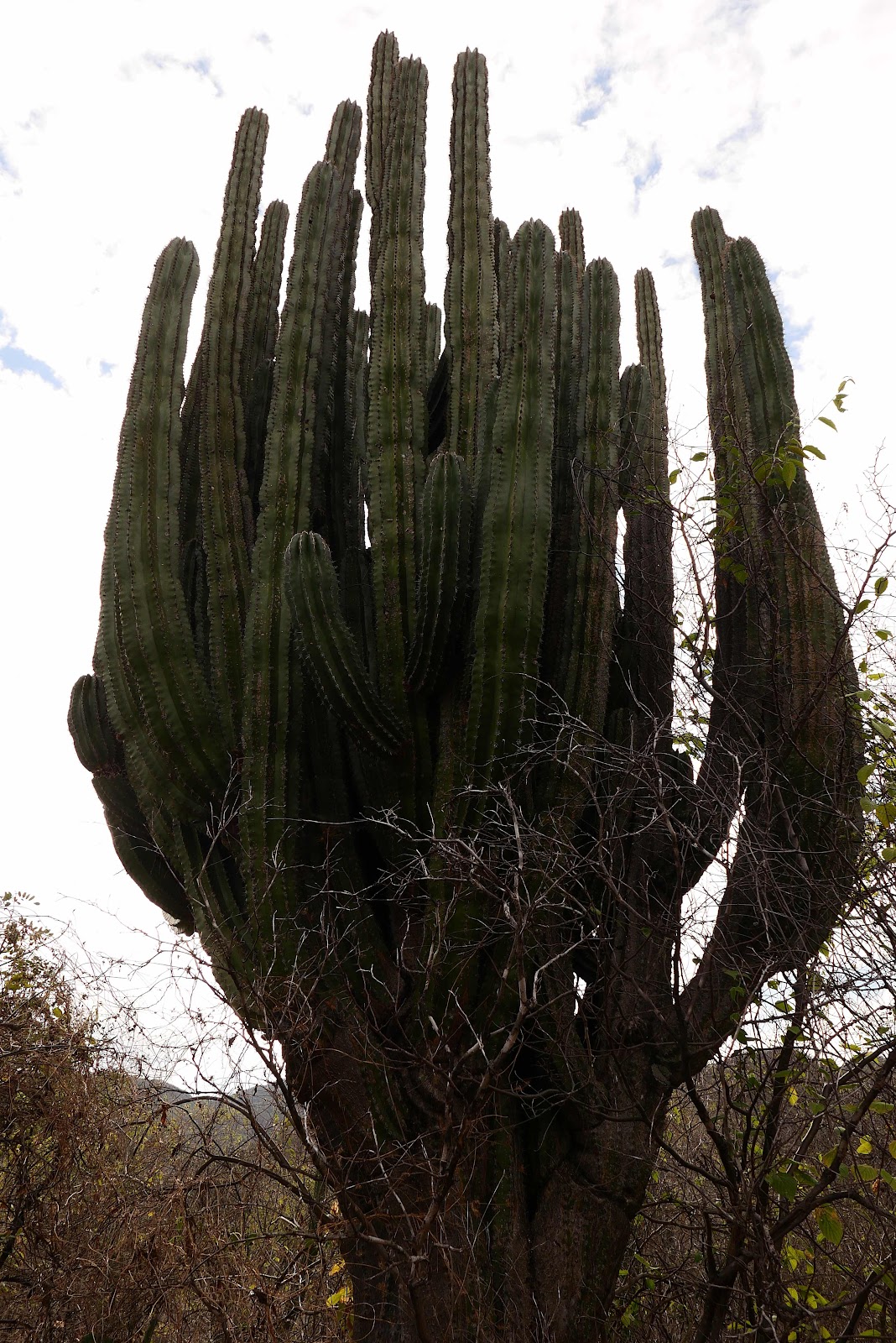 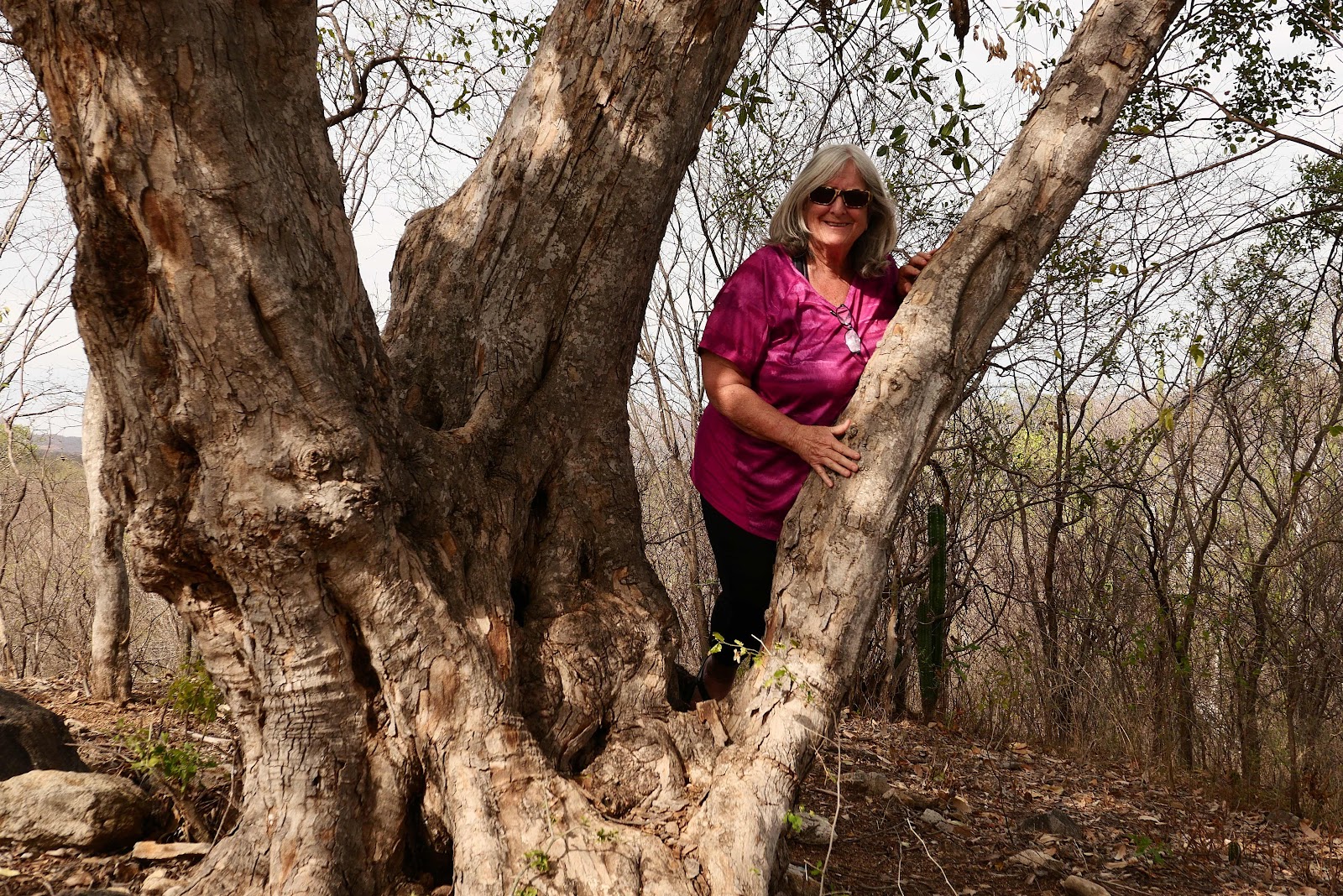 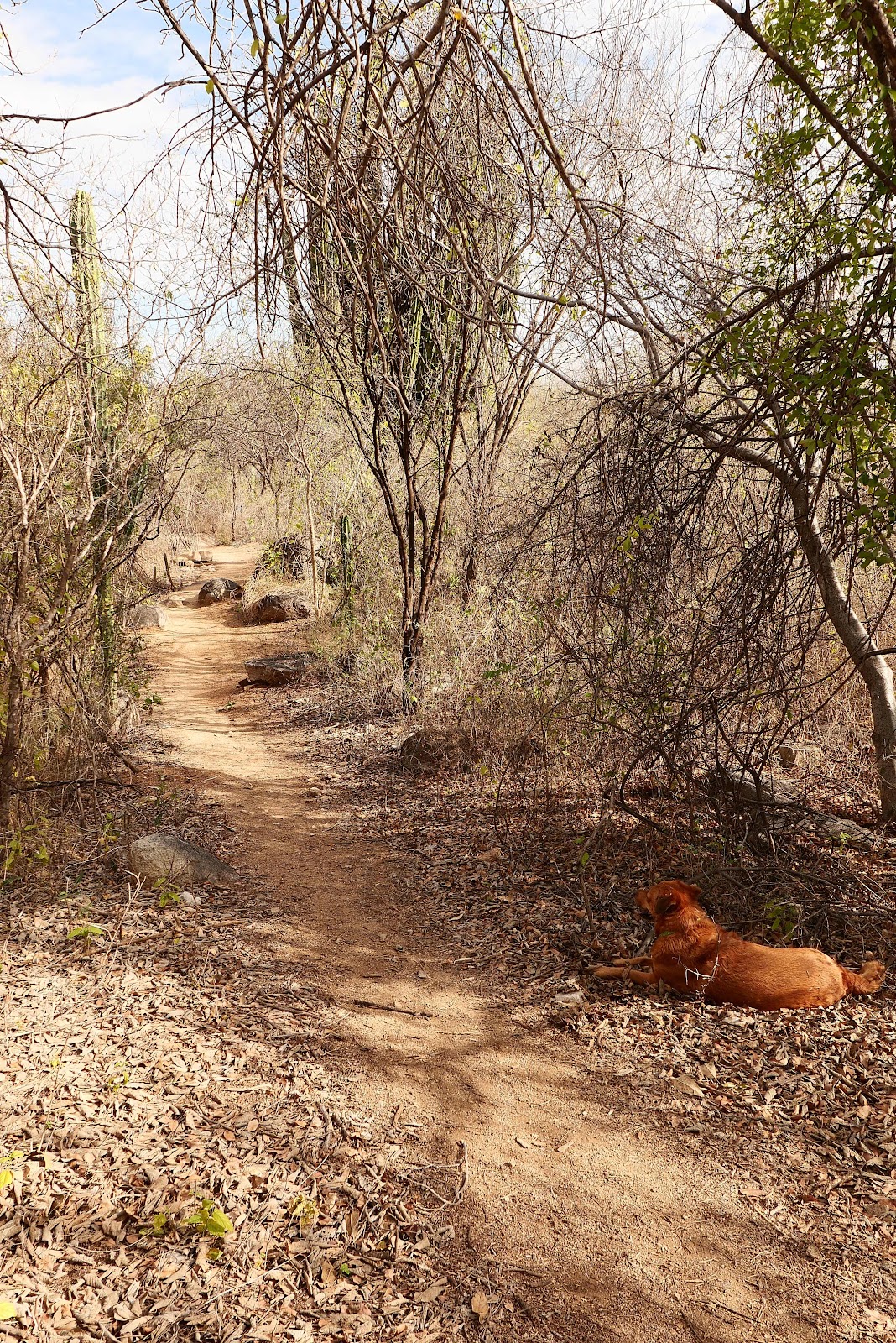 We left some money in the donation box and left town glad to have made the effort to drive up and see the place. 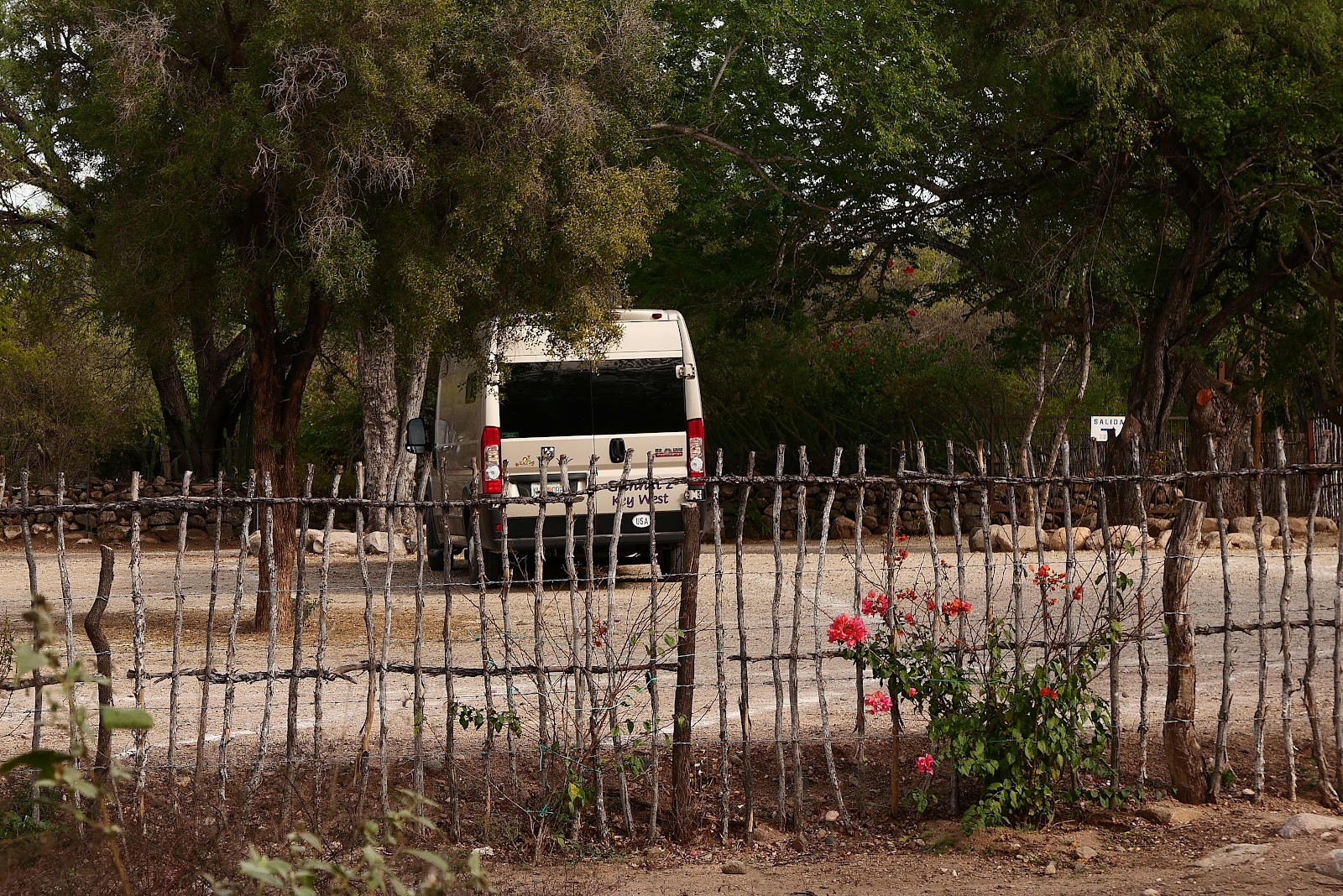 We drove back down to Navajoa the industrial city of 145,000 people astride the main highway. We crossed the highway dodging window washers trying to make a buck at the traffic lights. Covid hasn’t helped and poverty is visible all over the place. No jobs. Well everything happens for a reason. So they tell us from middle class America. A sentiment with which I do not agree. 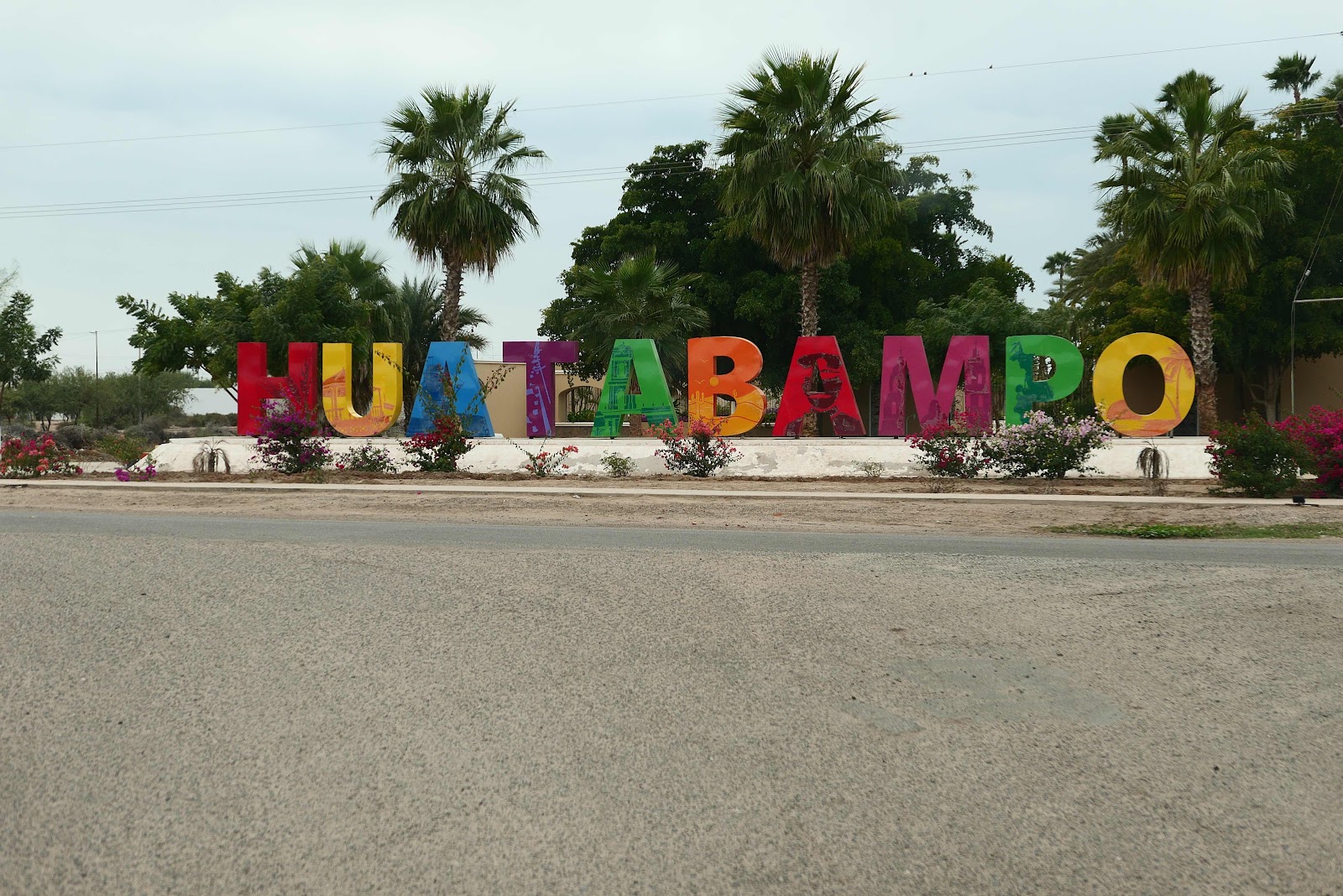 iOverlander, the best camping app showed a campground and a wild camp on the beach.  We needed an hour of daylight to drive 36 miles across agricultural country to the sea shore. How bad could the road be? An average speed of thirty miles an hour predicted by Google maps had me wondering how many potholes we would be dodging? Not that many it turned out but we crossed two towns and several villages. More poverty and dust and dogs hanging around their homes. It looked bleak for a while. 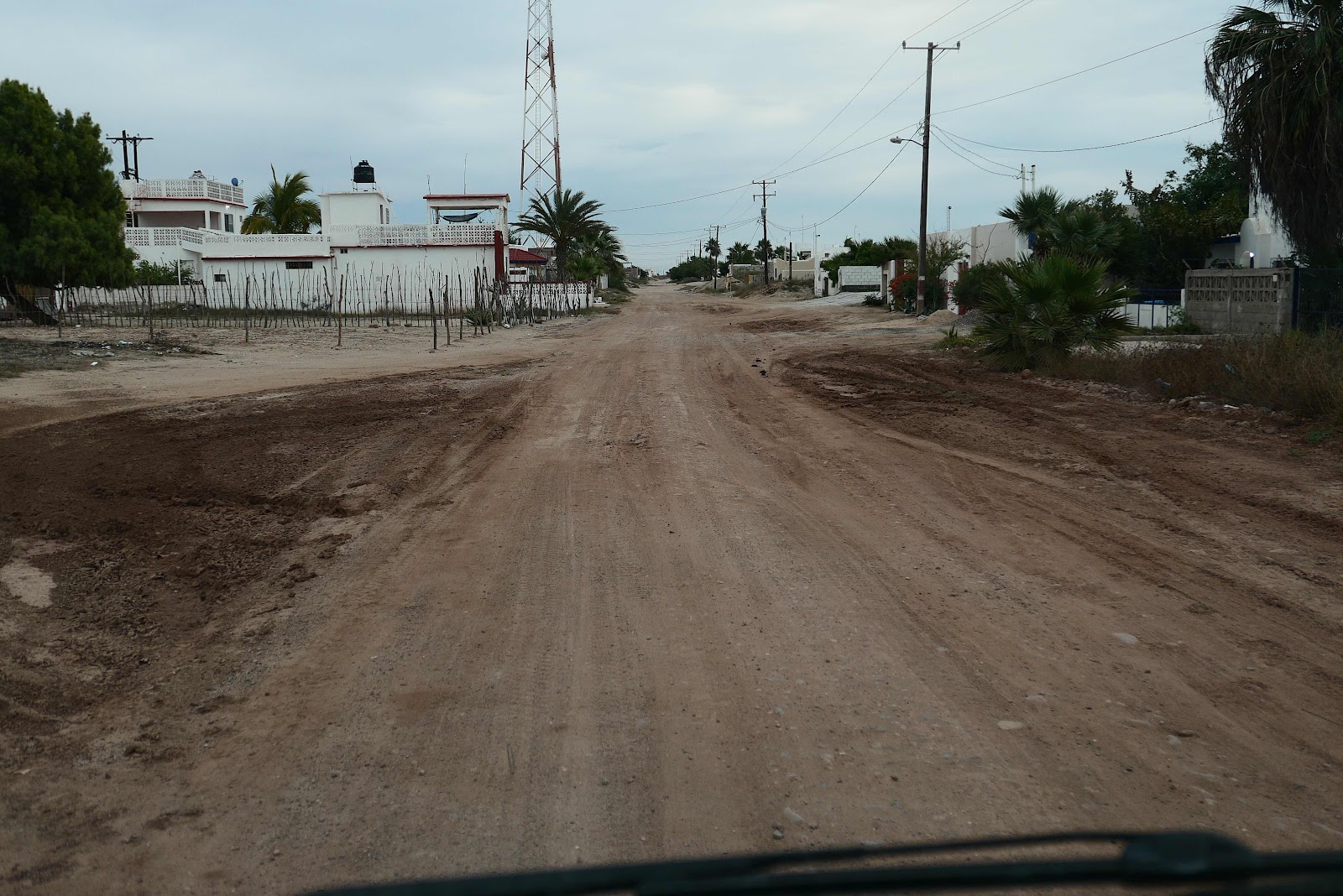 We arrived around five pm with an hour before darkness to decide what to do. We had seen a couple of gas stations with parking spaces which we could use as back up parking spots if the beach didn’t work. Actually we passed the RV park, and to our surprise there were two giant trailers, fifth wheels technically, parked at waters edge. We travelers are everywhere! Who would have thunk? 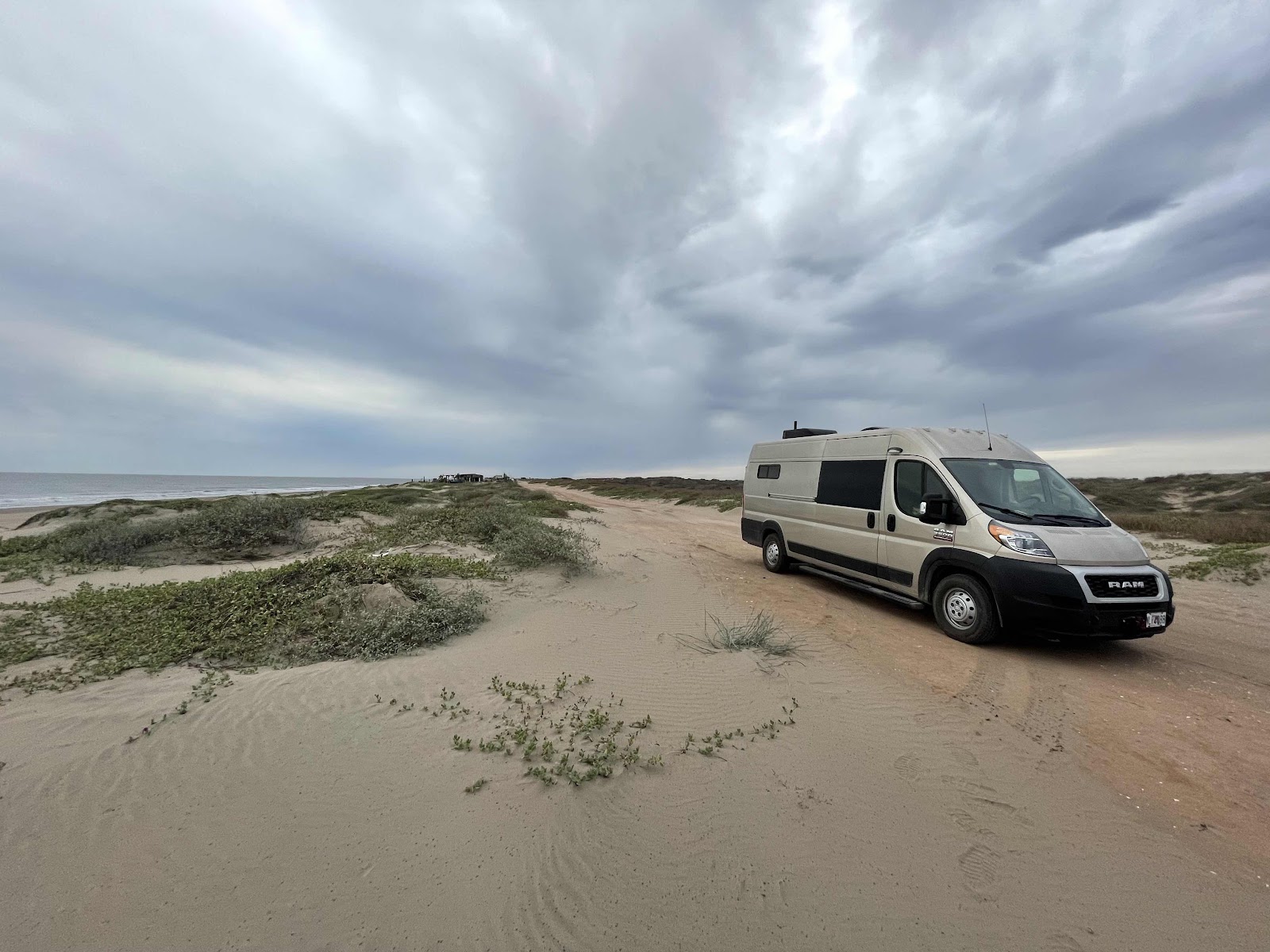 Some of the homes in Huatabampito were shacks and others were comfortable middle class beach homes. The asphalt ended and we picked our way through sand and packed dried mud to a point beyond the last shacks. 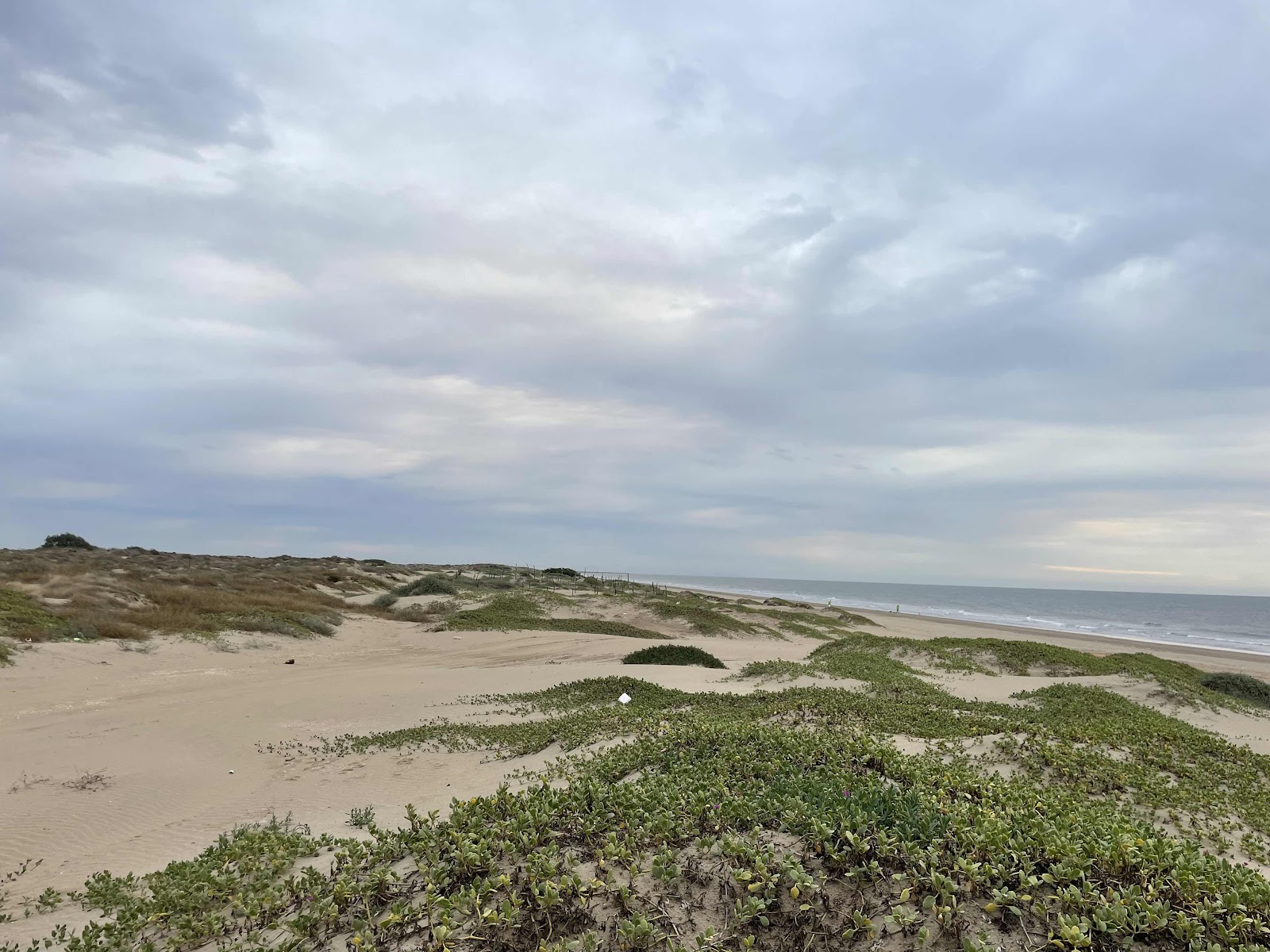 Total isolation, a light north wind and a few drops of drizzle. We weren’t alone though as a couple of men were casting for fish off the beach, hauling weighted nets bodily into the surf. Not an easy life. 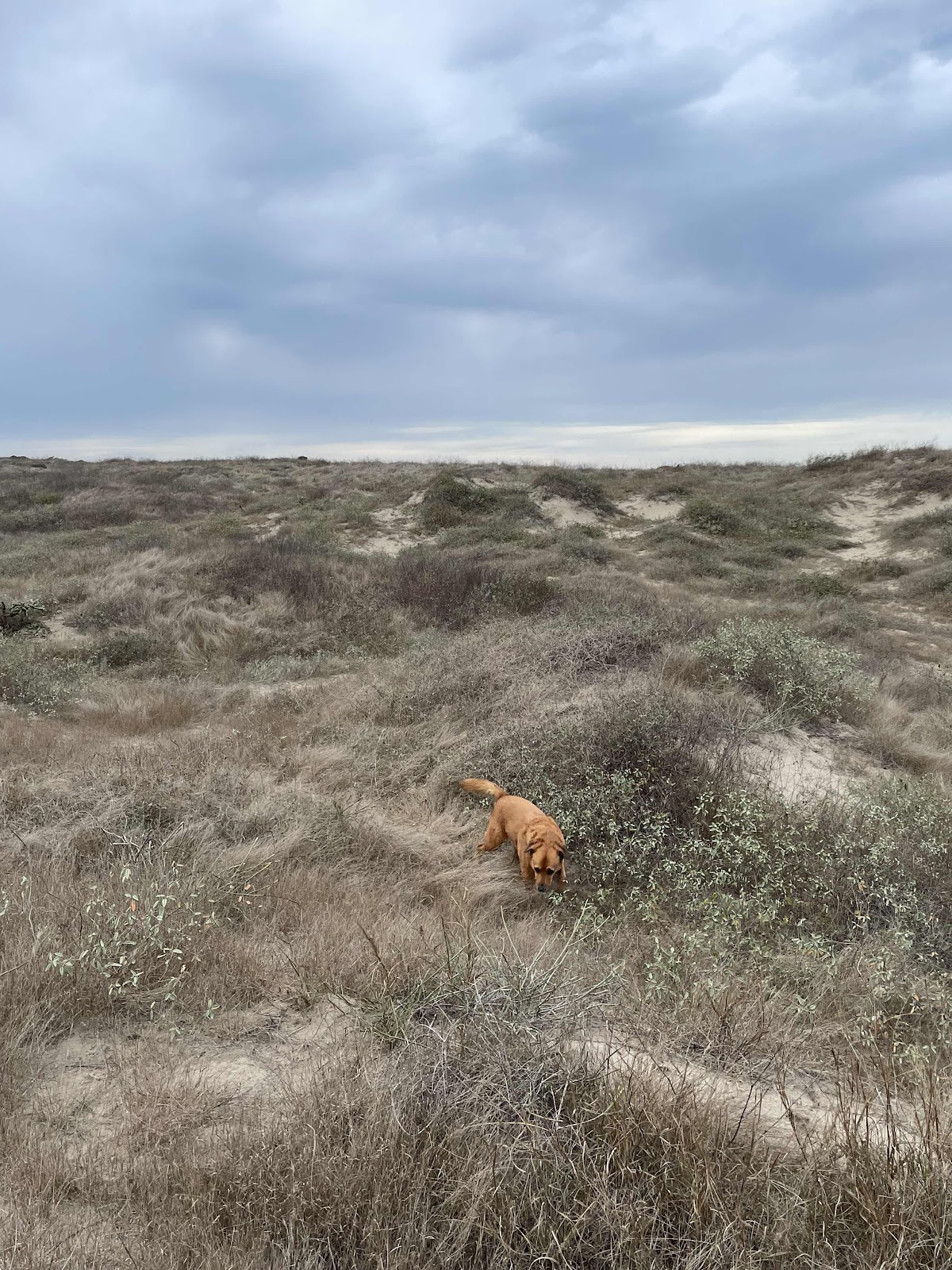 Off shore we could lights appearing on shrimp boats on the flat water out at sea. Rusty got a burr in his foot which once removed left him free to end his own long day by running up and down the endless sand. Seen here inspecting the sand anchor at one end of the fisherman’s vast cast net in the surf. 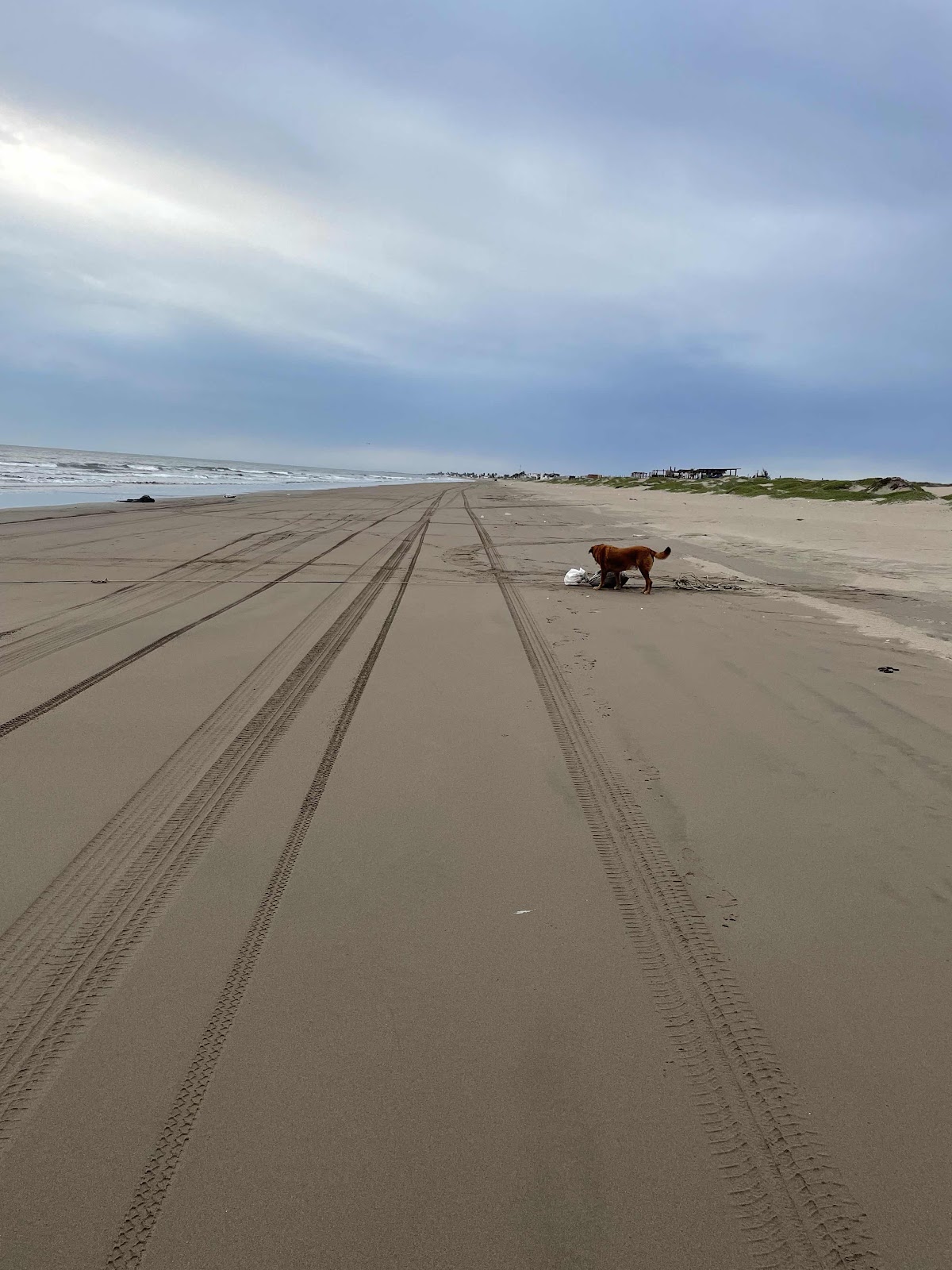 Soon enough they packed up and walked up the beach toward the village. That was when we discovered we were invaded by mosquitos all over the place. I have an electric zapper shaped like a tennis racquet and soon I was waving it around like a madman. I killed many but it seemed like they were reproducing in the van. Grrr. 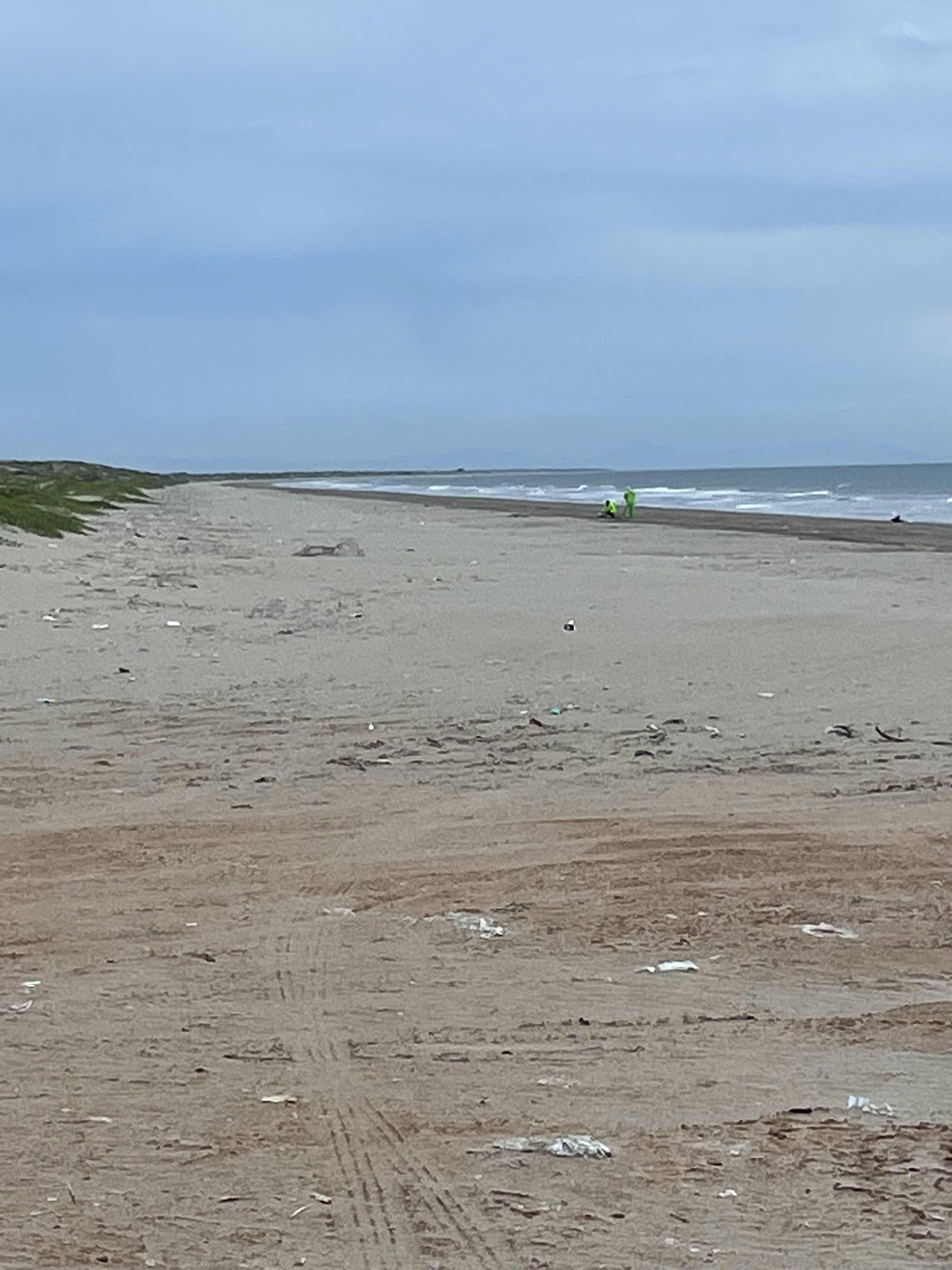 How long shall we stay? It depends on the weather. Some sunshine would be nice. That’s the point of our drive south and as far as that goes we are away from the worst effects of the cold up north.  That’s a start and there’s lots more beach to the south of us. It will be there when we get there.

Posted by Conchscooter at 2:00 AM No comments: