My wife first remarked on the gray hairs Rusty has started growing around his mouth. I'm not sure if it is merely a matter of finding what you are seeking or if our observations are accurate but Rusty seems to have entered a more meditative phase of his life. He gallops less and sniffs more. I photographed him at the motorcycle shop where my last Vespa is waiting for a new ignition coil prior to going up for sale. Jiri the owner was looking the parts up and I was taking a lesson from Rusty in waiting patiently. Jiri was amazed as usual by his calm patient ability to wait and not wander. 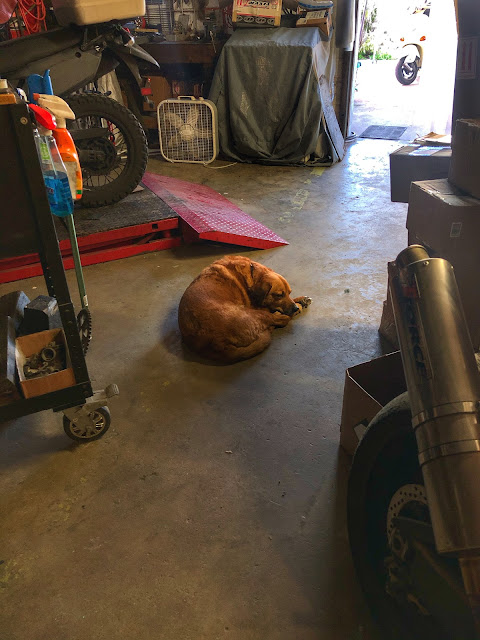 Jiri's dog died recently, middle aged and with a failing heart and Joey's death had the usual devastating effect on Jiri, an effect people who don't like dogs don't understand. Jiri told me about a dream he had a week after Joey died where the dog came to him and reassured him all was well. I told Jiri my main hope as I lay dying in the road was to pass up between the clouds I could see overhead where I wanted to meet all my dogs from lives past. Fortunately or not the paramedics intervened before I got there. The encounter was postponed not cancelled. 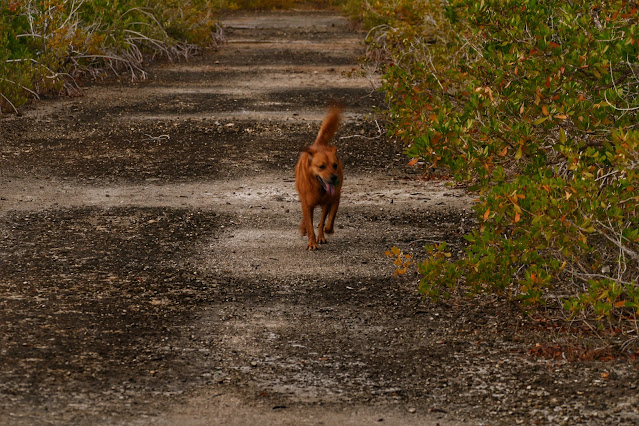 Jiri is reluctant to find a replacement to fill the space Joey's departure has left in his life. He brings up all sorts of nonsense about working all the time, flying to Michigan to see his daughter, the state of living and working in a motorcycle shop as though a dog were burdened with our sensibilities of class and status. Rusty likes nothing better than to sit in the dirt outside his shop and watch the world go by, and indeed on this visit I could hardly tear him away from his shady spot in front of the shop. I'm working on Jiri and I expect one more unwanted dog will find a home sooner or later, preferably sooner as 2.4 million unwanted dogs are killed every year. This is one of the lucky strays who came into our lives in February 2016: 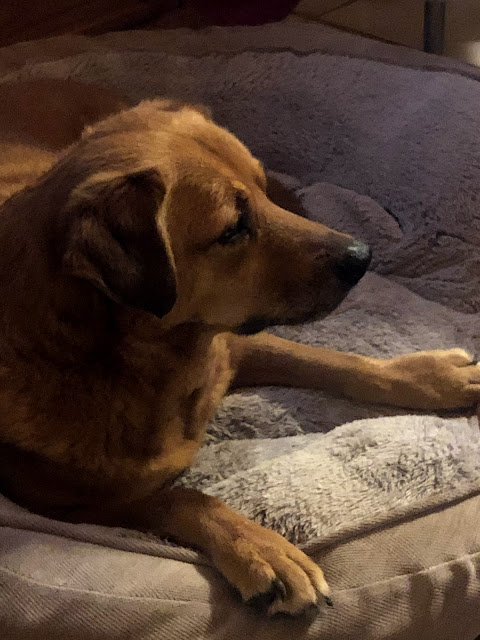 The two questions I find myself fielding are what is his breed and what is his age and both answers are in reality fuzzy, so I lie. I used to imagine we got him when he was two but I think he suffered longer locked up in a back yard (an aversion he has to this day).  He certainly spent a year living in the Redlands of Homestead, observed by his eventual rescuers, refusing to be rescued until the pack he ran with was killed off by the nursery workers and farmers in the area (he fears fireworks and gunshots still). I dunno, maybe he's eight? Half way to dead? All things being equal, which they rarely are. 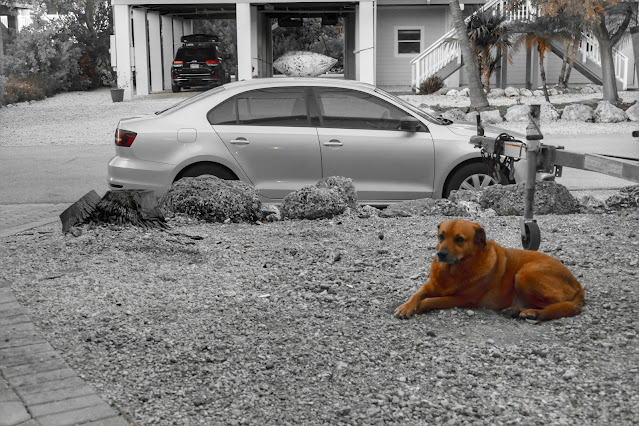 As to his breed it is a question whose purpose I never quite understand but it seems critically important to every passer by.  I call him a Miami street dog to end the questioning as most people have no idea where Homestead is nor why farmers hate the strays dumped there so pathologically that they poison and shoot them. His actual breed i found out quite by accident one day when strolling down Catherine Street. A man approached walking Rusty toward me, and it was only when I was roundly ignored by the dog I realized she was identical. I asked him the dreaded question and he said she was a "Carolina Dog," which meant nothing to me so I looked it up. Because indeed Google (Bitter Southerner link)  answers all questions. Click the link to read the definitive description of the American Dingo. 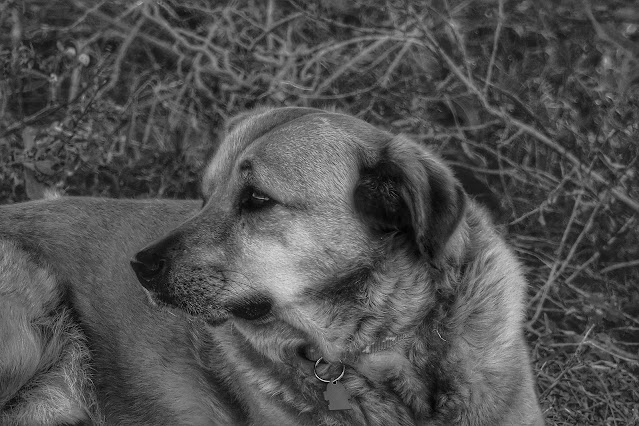 Passers by who find my categorization of his breed as a simple street dog to avoid lengthy discussions, usually override me and categorize him as part Labrador (all dogs are "part Labrador" according to categorizers) and part Chow (because he has black spots on his tongue). I only know this because I have had this conversation a few times. I stand there and nod my head wisely.  I told a vet employee once that I was told he was a Carolina Dog and she snorted and said that was  fancy name for a mutt. Cool I thought, except that he has all the characteristics of that mysterious breed except the pointy ears. 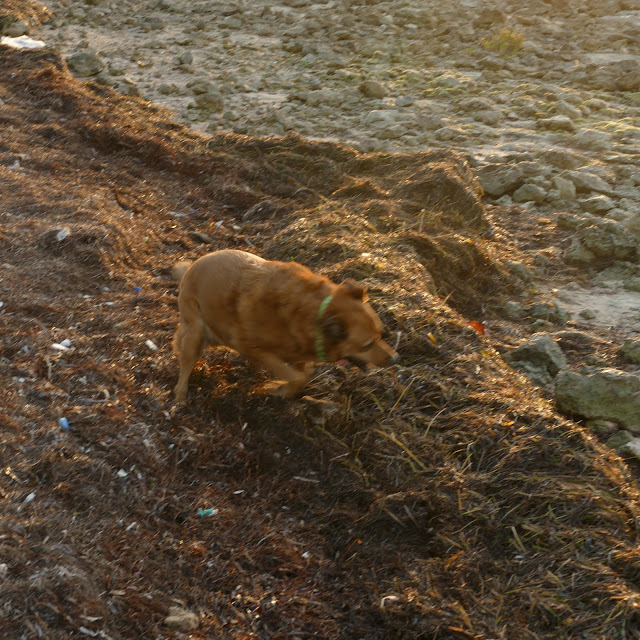 As it is he is the smartest dog I've ever known and I can see how living with people not tuned in to his particular needs  would make him crazy. He and I have a deal where he does as I ask but I don't ask unless I have to. I have found that when he hears gunshots or fireworks or backfires he runs to me not away and I cherish his trust. Thunder has become less of a problem though it still makes him anxious yet he no longer dives for the darkest corner of the darkest room in the house. He shivers and sits closer to me which is an improvement. 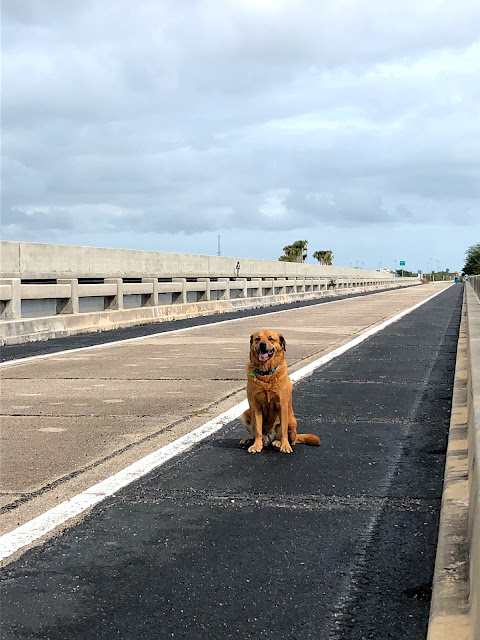 I'm not sure how much he will enjoy life on the road as he does like his routines but we are already creating new routines for him as we take short trips and his concern about the weird noises the van makes has abated already. He won't sleep in the back by himself when we are under way but an afternoon spent in the van while my wife teaches noisily by zoom upstairs is an experience he has learned to enjoy. 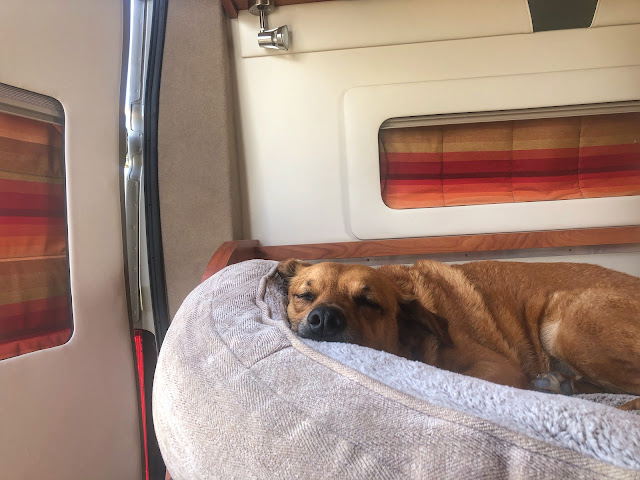 Oh and what is a Carolina Dog? The only wild dog found in the US, still living wild in the marshes on the South Carolina border with Georgia. Pure Carolina Dogs are a form of dingo, not bred by humans and only identified by characteristics peculiar to their breed and thus not properly recognized as a separate breed by the authorities of such things. I read the Bitter Southerner article linked above and now when people ask what breed is he I refer them to that which they probably ignore. Rusty is as Rusty does and I trail along behind him. I hope for several more years to come. 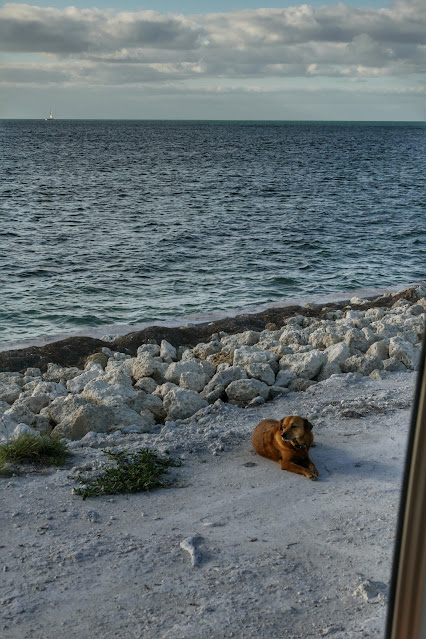 From the Bitter Southerner article:

About a year after I got Penny, I googled ‘American dingo.’ I can’t remember what exactly drove me to search for it, but I remember what I found. Picture after picture of dogs who all, in some way or another, looked like Penny. Some looked like clones. These dogs had all kinds of names: Carolina Dog, American Dingo, Dixie Dingo, porch dog, and — there it was — “yaller dog.” Dad was right.

I was sucked into a hole, reading descriptions and looking at photos of people’s dogs. I was shocked that behaviors and traits I thought were unique to Penny appeared in most Carolina Dogs. The hooked tail and the almond eyes were present in all of them. The behaviors are what convinced me, though. I always bragged that I never potty-trained Penny. She just learned not to go to the bathroom inside within the first two weeks I had her. Ditto for all Carolina Dogs. She would dig small holes in my parents’ front yard to stick her snout in. Ditto again. She was more loyal than any other dog I’d ever been around. Carolina Dogs have an extreme pack mentality.

The more I read the more amazed I became. Carolina Dogs are hypothesized by their discoverer to be the only American dog breed with no European ancestry. All of their forbearers are said to have come across the Bering land bridge with the first humans to inhabit North America. They’re dogs that look and act the way they do because of the natural selection they endured over thousands of years in the South.