It is said the late Blondie Hasler when asked in 1956 why he chose not to carry communications gear to summon help when he decided to race single handed across the Atlantic told his interviewer; " I trust I should have the decency to drown like a gentleman and not bother the rescue people." I feel rather the same way during hurricane season in South Florida. Help us certainly, but let us at least attempt to take care of ourselves in hurricane season and minimally at least think for ourselves. Cudjoe Key after Hurricane Irma's 140 mph winds, September 10th 2017. 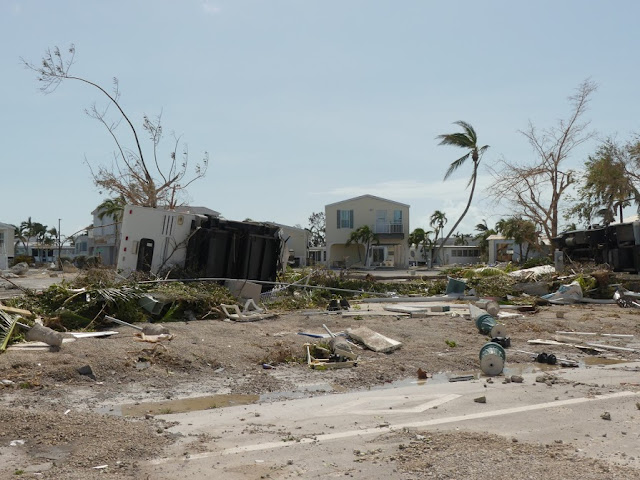 There is a part of me that is profoundly annoyed by this Dorian episode in Florida. It is perhaps in the nature of the most immediate forms of communication we live with these days that require drama and superficial involvement and empathy, but I think it's time we grew out of the dependence on social media to inject our humdrum routines with sparkle and a frisson of irrational fear-filled anticipation. Hurricane Dorian has been downgraded to a "mere" 110 mile per hour Category Two storm after devastating Abaco and Grand Bahama for days with 180 mph winds and massive seas. As these web photos show the devastation is total and life will not return to normal for years. 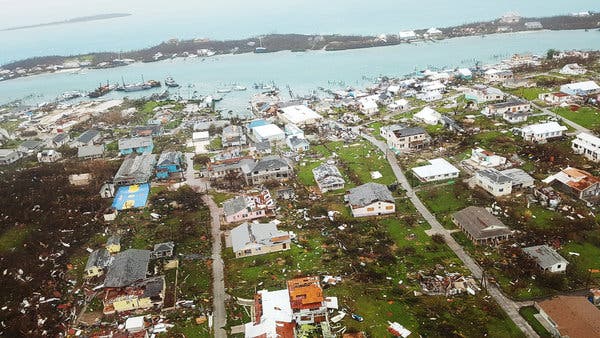 In the Keys Tuesday as a hurricane day with courts and schools closed and never any sign of a storm to lash these distant islands and so bad was the thoughts and prayers and the stay safe brigade on the Internet I retreated to my own world and carried on as usual. Gas disappeared in a spate of panic buying and plastic water bottles are piled high in homes and stores across the Keys. I understand the notion, rather tenuous at the moment, of being prepared but that shouldn't involve running around like headless chickens mixing metaphors and declaring the sky to be falling. If you choose to live at these latitudes a certain stoicism and best use of available scientific information is what is required. And empathy wasted on us is better spread to he other side of the Gulf Stream where things are profoundly desperate. Supplies will be helicoptered and parachuted to the displaced populations as harbors and airports and roads are all entirely wrecked. These Bahamians are the ones we need to focus on; they were always the target population of the vast storm that was Dorian. 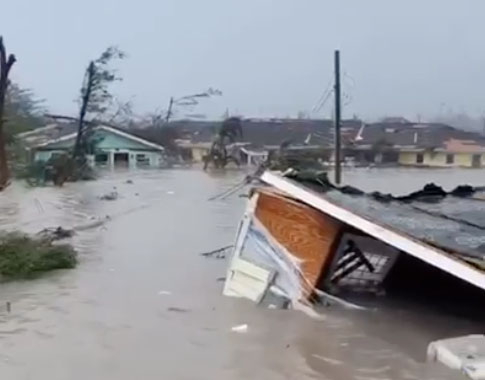 When authorities declare emergencies as a form of wizardry to limit liability they set people up to ignore future calls for evacuations and  careful examination of the facts. The National Hurricane center in Miami has the science and the understanding of how to use it when it comes to best hurricane predictions. All the illuminated screens and loud scary headlines base their graphics on the NHC forecasts and reports by the crews flying government planes into hurricanes to retrieve meteorological information. They even paid us a visit in the Keys a few years ago to show us what they do and it was fascinating: 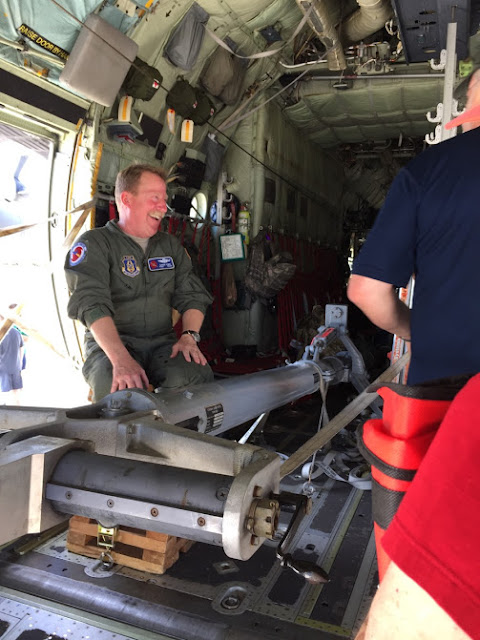 The reality of hurricanes is that we none of us are ready for them. People without money cannot prepare and people with money fool themselves into thinking they need not prepare. And the cost of building hurricane resistant buildings is not to be trifled with. The result is widespread destruction but thanks to the Hurricane Center's indefatigable predictions very few lives are lost where evacuation is a possibility. The chance of dying in a catastrophe even like this one is low though I fear the death toll will be quite large in the Bahamas owing to the flat low lying topography, the magnitude of the storm and its duration and the inability of most of the residents to flee in advance of Hurricane Dorian. 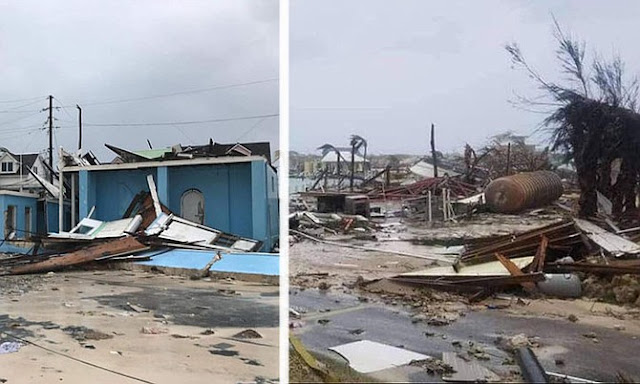 In the Florida keys the situation  is very different and death is a remote possibility. Prolonged stress and discomfort is the reality. Several thousand Puerto Ricans died in 2017, no one died in the Florida Keys. That's just the statistical reality. We need to calm down and study the odds and make our choices but doing so in an atmosphere of daytime television soap opera does no one any good. I recall in 2004 and  2005  hurricane fatigue set in in a  bad way and people got tired of evacuations that led to nothing but loss of income and tourists frightened off. Add to that a few years of no hurricane alerts and by the time Wilma came around there was a general reluctance to leave when leaving was the best thing to do. 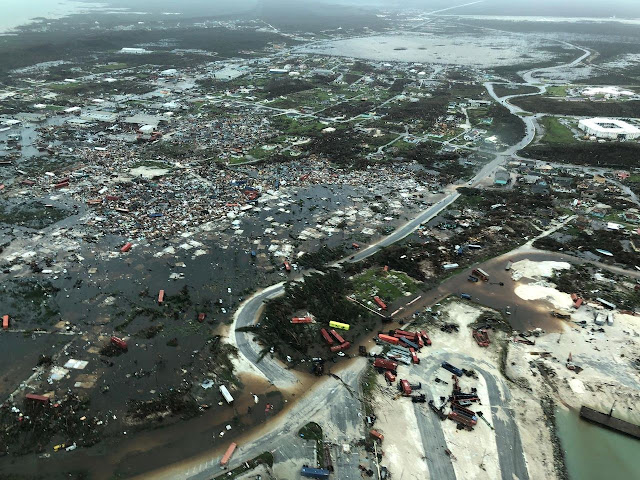 I don't hold with hurricane bravado, the sort of noise people like to make before a storm announcing loudly their intention of staying no matter what and getting drunk. I would prefer for the community to find a middle path there too. Instead Northern Florida has to go through a while series of Dorian gyrations even though it looks much more likely the Outer banks are in for it next. And those islands are built on sand. 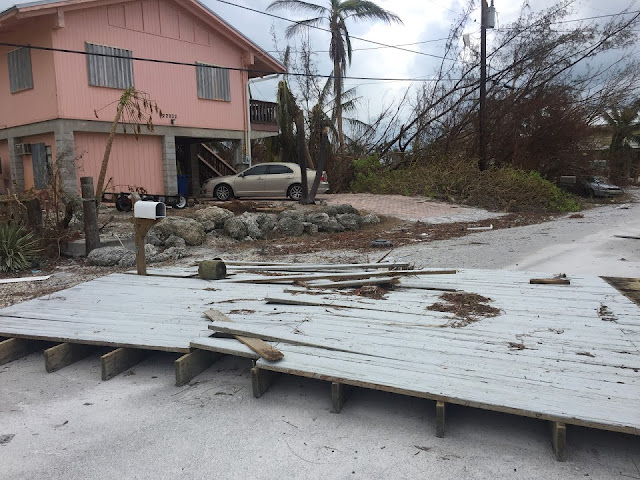 Above is a picture of my home the day after Hurricane Irma left the Keys in early September 2017. Seven foot flood waters wrecked the downstairs storage but the dwelling upstairs was untouched. My motorcycle and my car were destroyed, my Vespa I had ridden to work and stored at the police station. The long drawn out recovery period was tiresome and tedious and I am in no hurry to live through it again. Every day I ponder what happened across the waters and I trust we can get away with it for a few more years. Meanwhile we must live with good cheer and dignity and not allow ourselves to be spooked every time a storm approaches. I trust the scientists of the hurricane center more than I do the divination of chance or a benevolent providence.  When the scientists tell me to panic I shall so do but not before. Wind and rain are facts of life in the tropics and there's no point in living here if you can't handle them with a certain inner serenity. Every Paradise has its serpent. This one is ours.
Posted by Conchscooter at 12:00 AM 2 comments: Links to this post