I walked yesterday. I climbed stairs yesterday. Yesterday I was a bipedal human being. To say I walked as you walk would be a distortion, dare I say a lie.  But I chased a walker frame down the corridor. Yanuel held my gait belt from behind and towed my emergency docking station behind us for those moments when Major Tom needed a rest and plunked his ass down in the midst of his exertions. Space exploration was never as tough as discovering the limits of your atrophied leg muscles.  I walked. “Walker, left foot, right foot (weight on hands), lock leg. Walker, left foot...” Stop hunching your shoulders Yanuel said gently, a tone far removed from the absent Eddy’s stertorian bark. Put weight on your left heel. You can do that now it’s weight bearing. 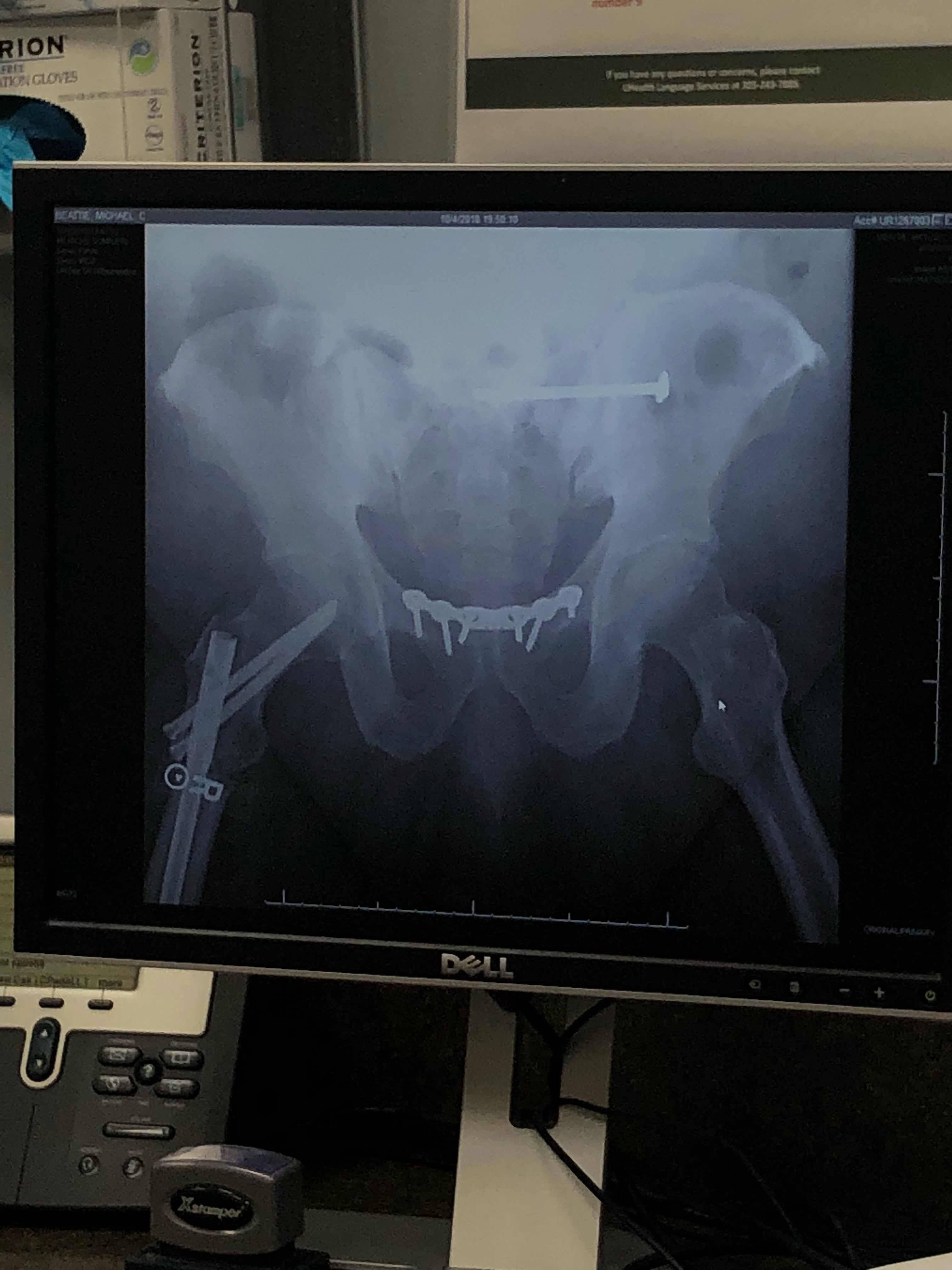 When the surgeon checked my X-rays and said fifty percent weight bearing on Wednesday a new world of mobility opened up. No longer hopping, no longer toe tapping with my left, I could walk. I went back to bed utterly worn out by nine hours in the chair and worried to think a nine hour day destroyed me. Yes I walk, yes I’m up and about, but no it’s not like you the able bodied. It’s a facsimile. This was how I stumbled October 12th with two hands on my gait belt and two experienced therapists Elias (left) and Eddy (pink) poised to catch my lumpish body from my failing legs. 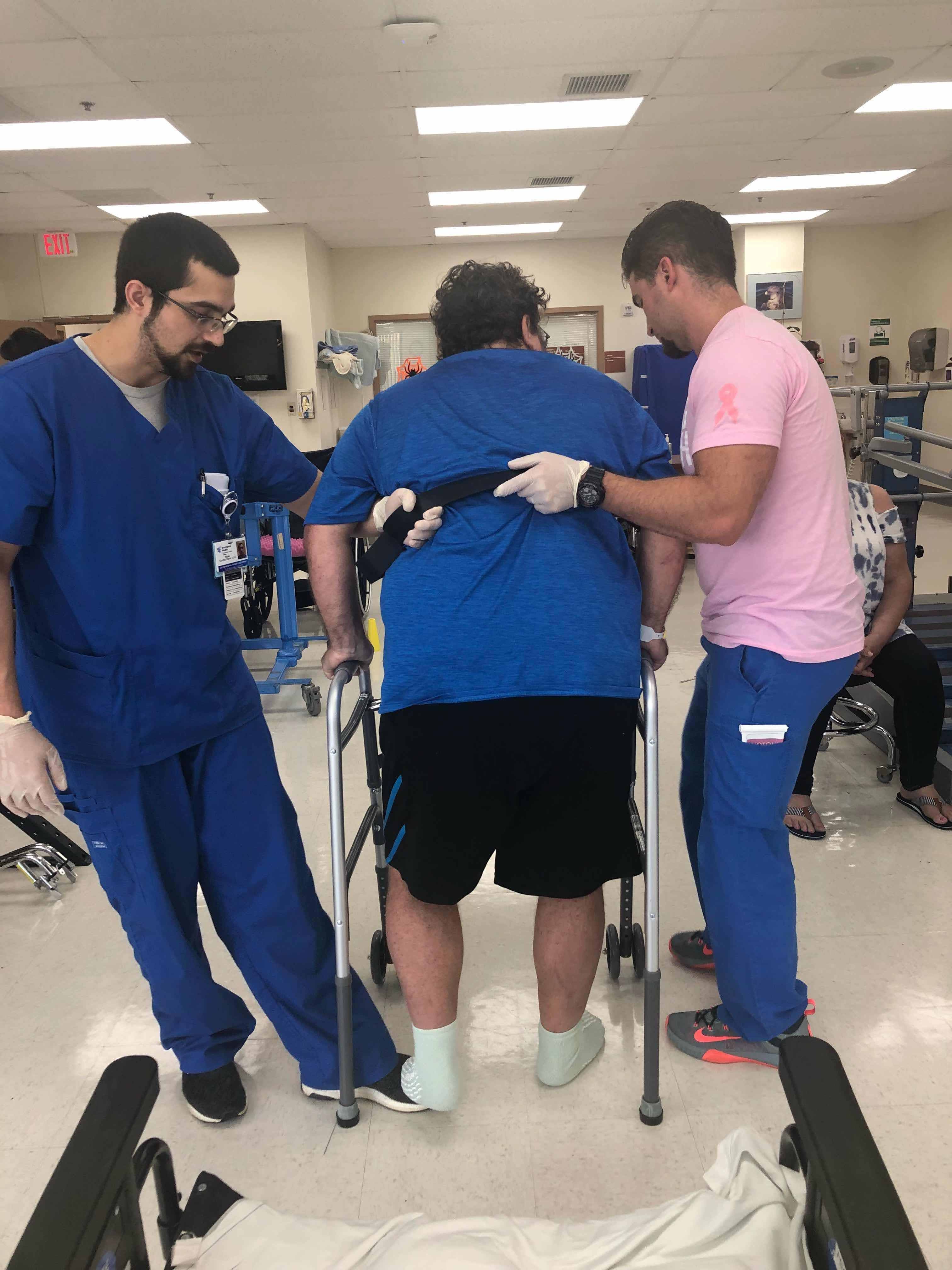 Yesterday Yanuel put his hand on my gait belt as required by protocol but I walked, not smoothly, not fast but unaided. I was in a hot sweat after twenty minutes march from one gym down the corridor to the other. I met Donald along the way walking to the tune of his own drummer, white hair in his seventies and well back from near death like me. He said his neuro therapist told him to use word association to remember names. Michael Row Your Boat was his way of remembering mine. Donald Duck I said to him. Screw you he rasped I’m going to have to think of something else he said for word association.  He took off down the corridor far outpacing me. As he prepared to turn into the gym he called back “See how it’s done?”  “Quack” I replied. The therapists collapsed with laughter. Fuck you Mickey he called over his shoulder. October 4th learning to stay upright in the chair gait belt at the ready in case of slippage. 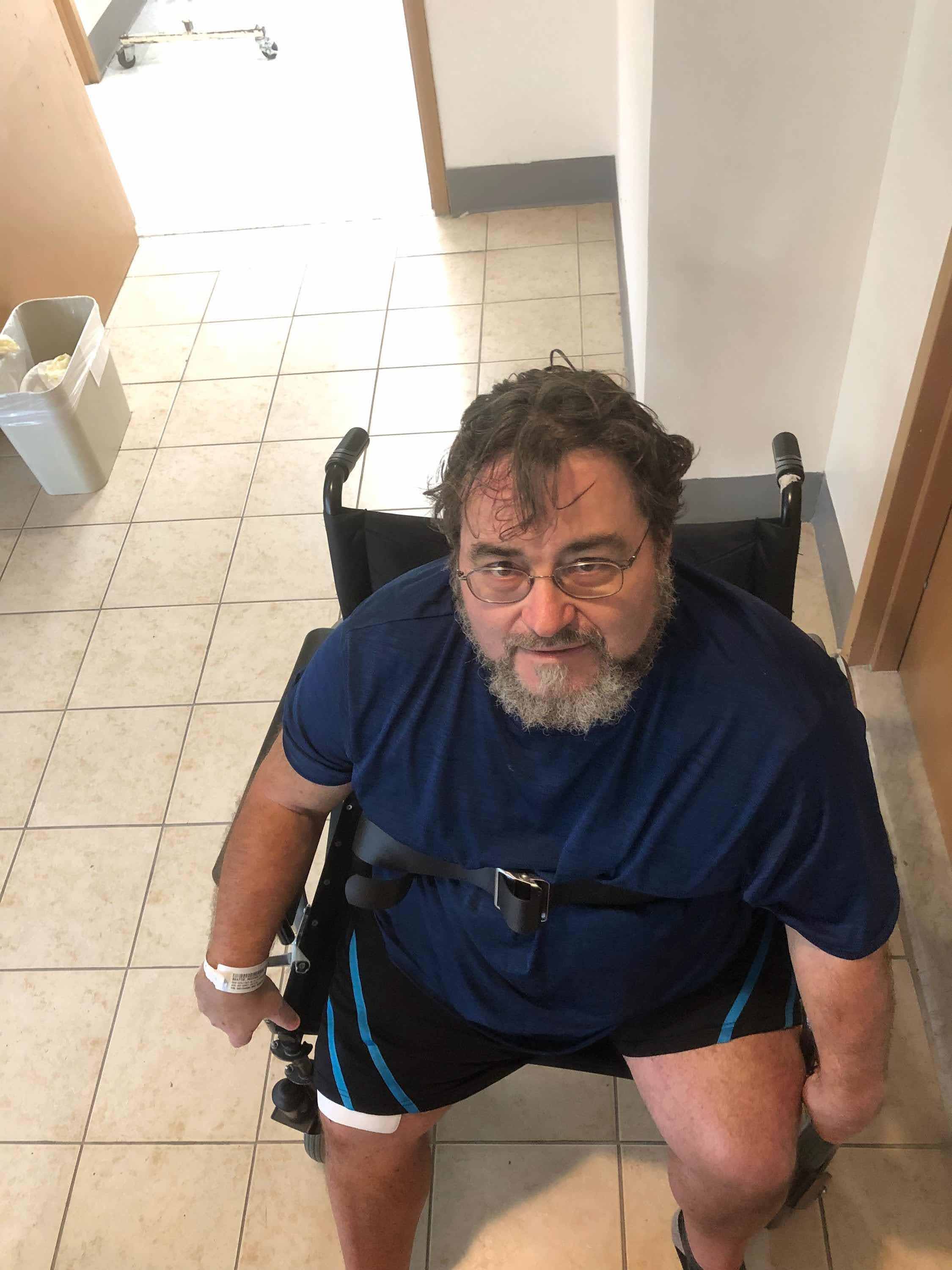 Donald grinned at me as I stumbled into the gym and sank gratefully into my waiting chair behind me. Good job he said and I knew he meant it. We’ve been through hell and we know what it’s like.  But hell was far from over. Yanuel handed me over to Tahina. Steps she said.  I have spent weeks watching patients enviously as they climb the three steps of the hydraulic staircase in the middle of the gym. I’ve seen them stumble as they concentrate, I’ve seen them get stuck turning at the top. I’ve envied them.  My turn one day I said. 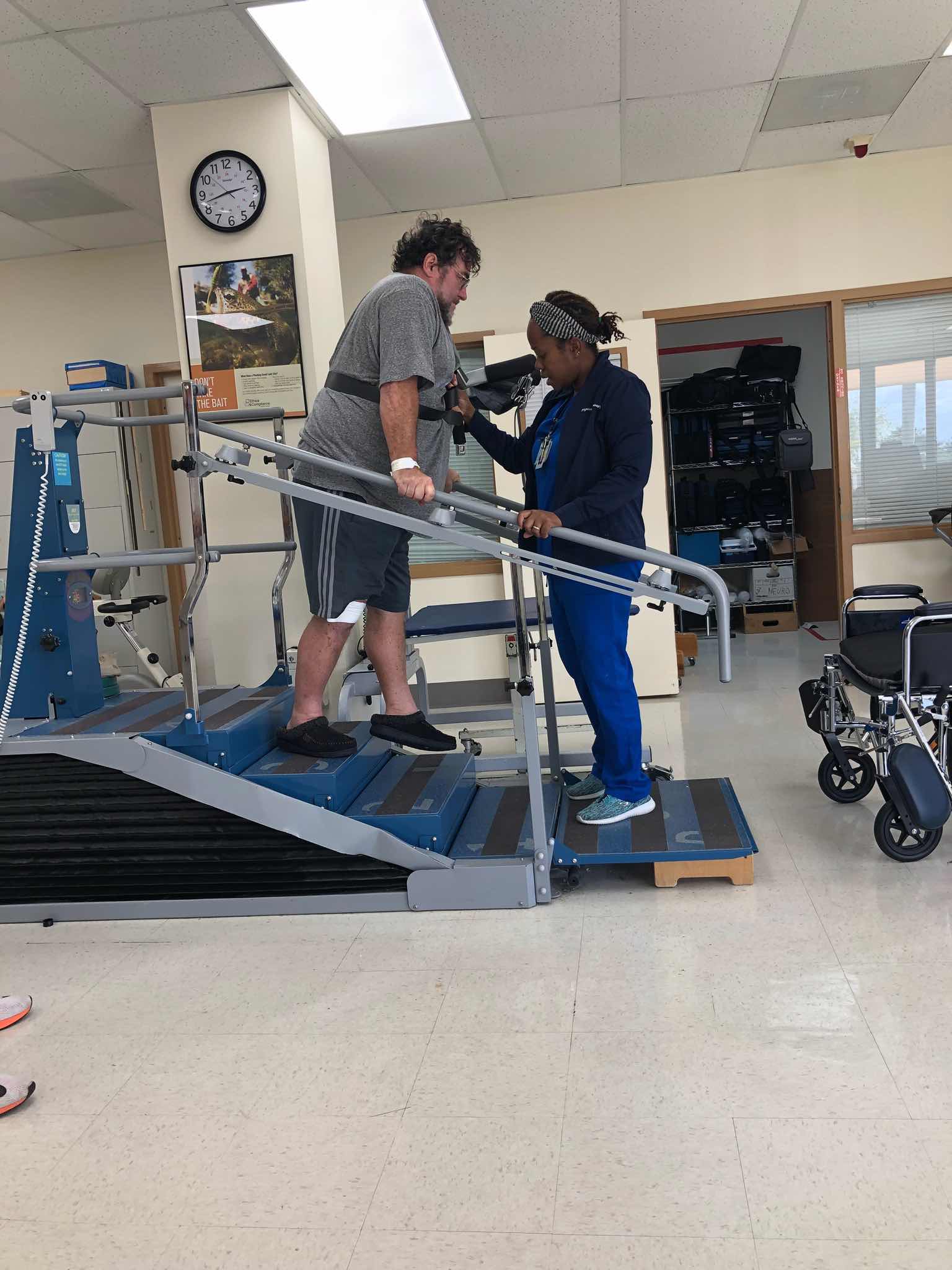 Continuing the sack of potatoes theme here we have Major  Tom space walking back towards his wheeled seat docked alongside the mountain. But no, Tahina said, back up and around I went up and down five times. Good leg leads UP to heaven she said, bad leg leads DOWN to hell she added. And that’s how I did it. Not gracefully or with confidence but hauling myself like the cripple I am with strong shoulders and arms. I walked stairs. 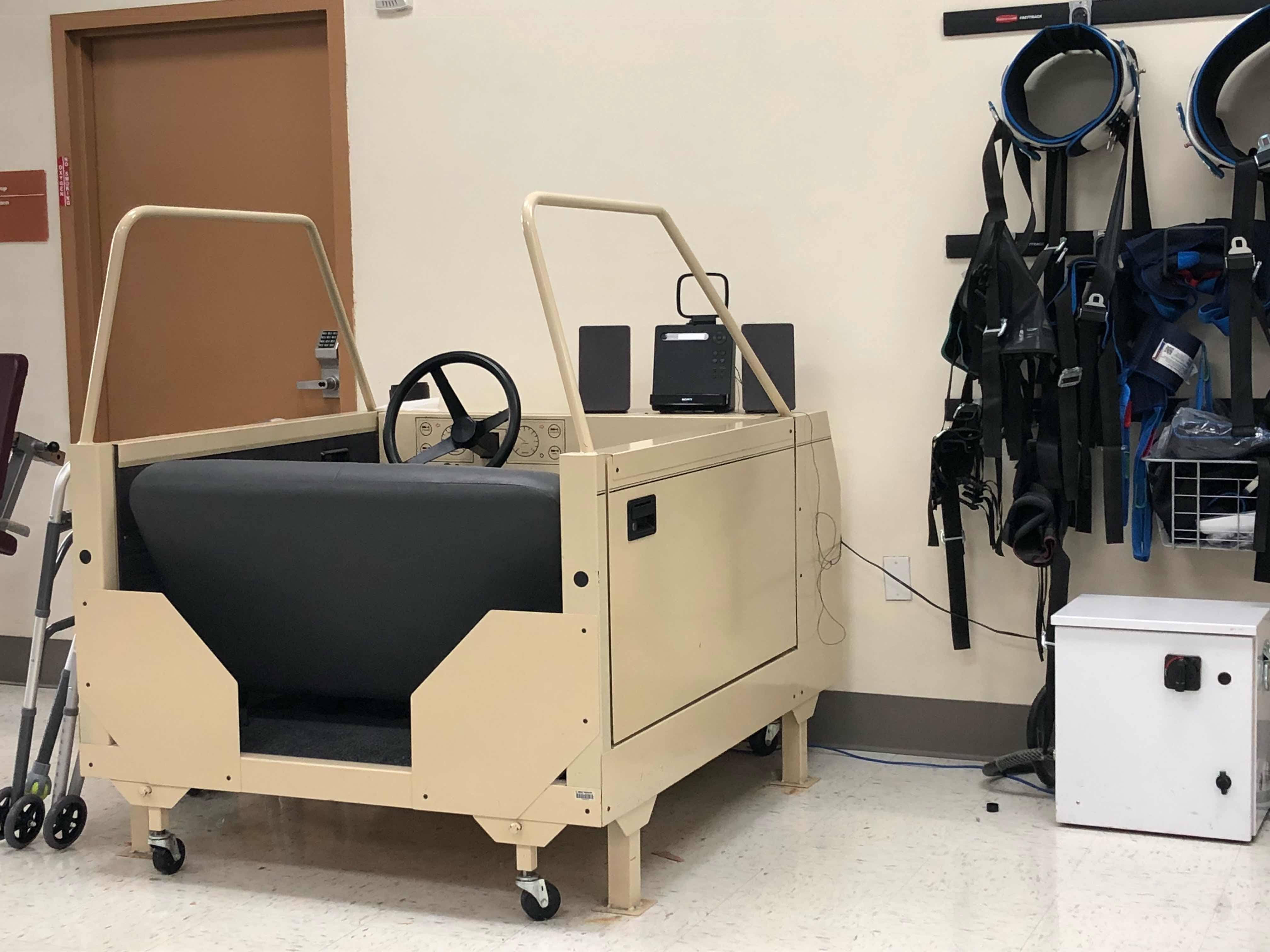 The car next time. Walking and walking and pivoting and getting up and sitting down and building stamina and not falling. It’s my job. I am a lucky sack of potatoes. Spare me a thought as you get up, walk, stumble and keep going and get irritated as my friend Webb did when he forgot something on the far side of the supermarket and he had to walk back. Once he and I strolled together.  We shall again. 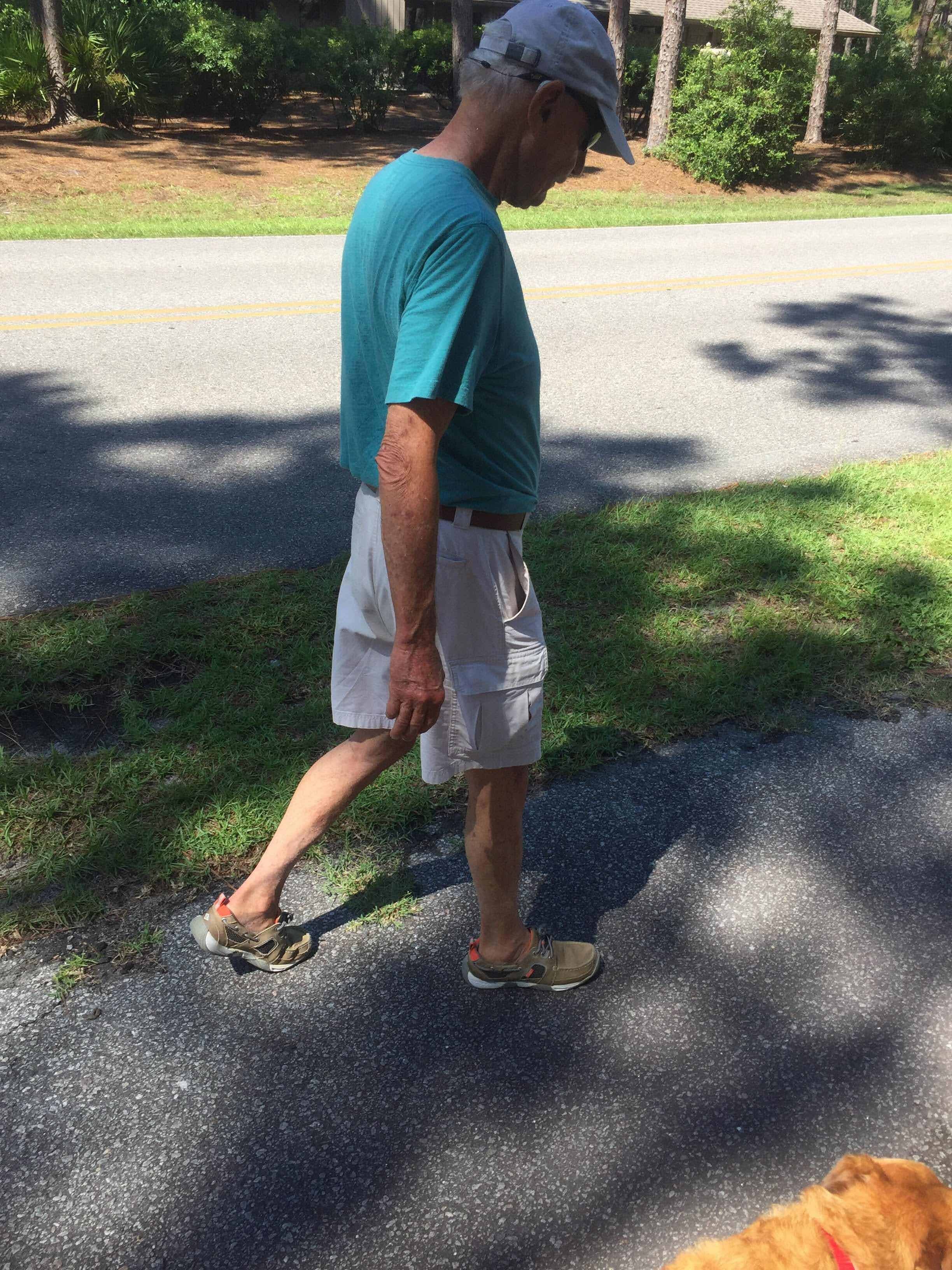