I worked an overtime shift Thursday during daylight hours to help out. We have lost another dispatcher to her growing family so she has quit to take  a lower paid job in the city with more family-friendly daytime hours. We are back to being short staffed so I am suddenly working far too much overtime especially as these are the holidays and everyone is taking time off. I know its Christmas time as there are wreaths on Duval Street. 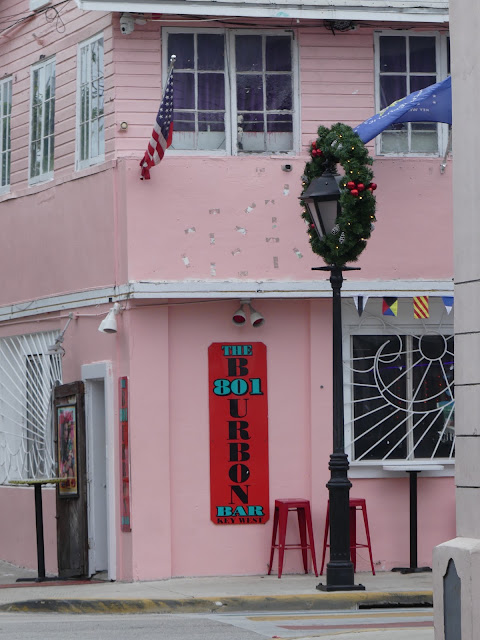 After my shift in daylight hours my wife met me and we went to visit a friend who lives near the cemetery. I did a brilliant job of parking the car up a ridiculously narrow alley and we sat on her back porch occasionally interrupted by low flying airliners landing at the airport. For people elsewhere Hurricane Irma is over and its time to get back to other normal functions of life but around here the storm has had some profound effects. People are continuing to leave the Keys, trash pick up is problematic and community leaders continue to refuse to face the fact that Monroe County was not prepared and is still no prepared to deal with a similar catastrophe. The thing is now we all know that there will be anther storm and we all hope it will be far enough in the future we can pretend to ignore the implications. 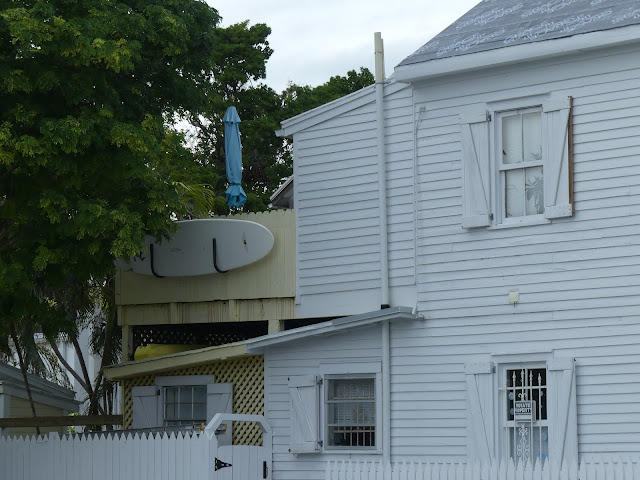 My wife went to the pharmacy in Marathon last week and it was a struggle for her to get out of class in her lunch "hour" to get her meds. She asked why their hours are now so short. No staff was the reply so they open at nine and close at four. That's all they can manage. I've got someone interested in taking my flooded Bonneville off my hands and I will need to get a copy of the title as I can find it at home. I was planning to go to the little DMV office in Big Pine that's open three days a week and is staffed by nice state workers from Marathon. No dice I was told as that office was flooded and won't reopen. I was crushed as now I have to ride 30 miles to Marathon to get my vehicle papers because the DMV in Key West is staffed by the rudest least helpful humans to inhabit these islands. On the bright side the Shell station on Summerland Key reopened this week, three months after the storm. 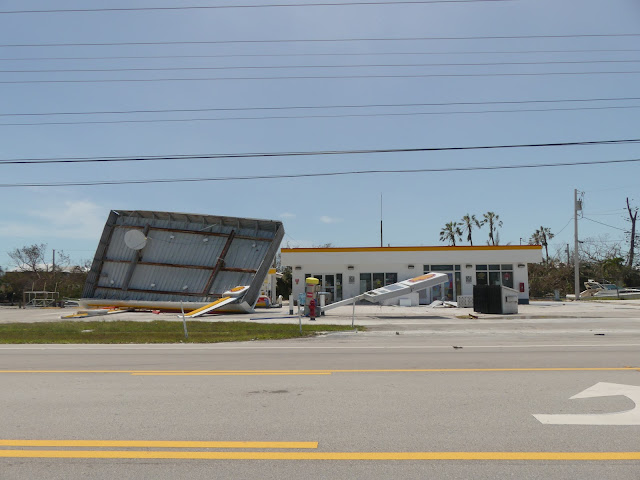 However it has no roof and I haven't got gas from a pump without a roof in so long it felt very weird standing there in the sunshine pumping gas into the car. However it was nice to see some small return to normality and I am glad to have a gas station two miles from home once again. There is trash still littering the highway as collection ceased for a while as the state had to investigate some contract shenanigans involving friends of the governor and dubious  payment schedules. 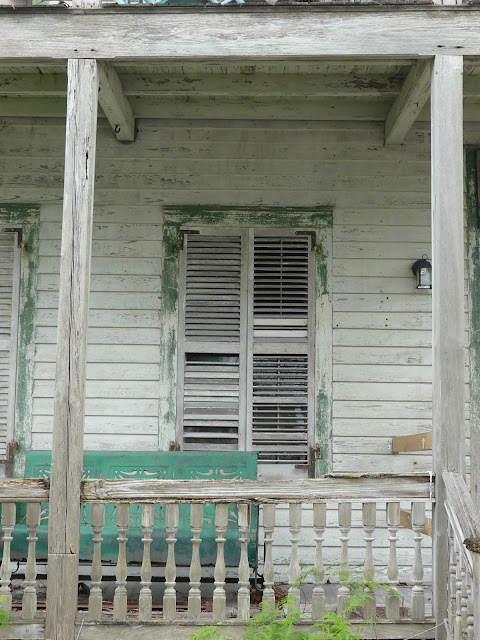 The creepiest thing is a rumor that is going around that explains why the water was cut off for several days after Hurricane Irma. And rumors will fill the space given to them by the absence of official explanations.  It seems that the water was turned off deliberately to prevent the sewage system from backing up and  filling people's homes. The new system involves individuals pumps that macerate the excrement and push it into the sewer system that will eventually filter the sewage into water. These grinder pumps are buried outside the property line and they need electricity to function. Without electricity they don't work and the fear was that pushing sewage and water into them whehile the power was turned off would cause chaos. So we had no water. 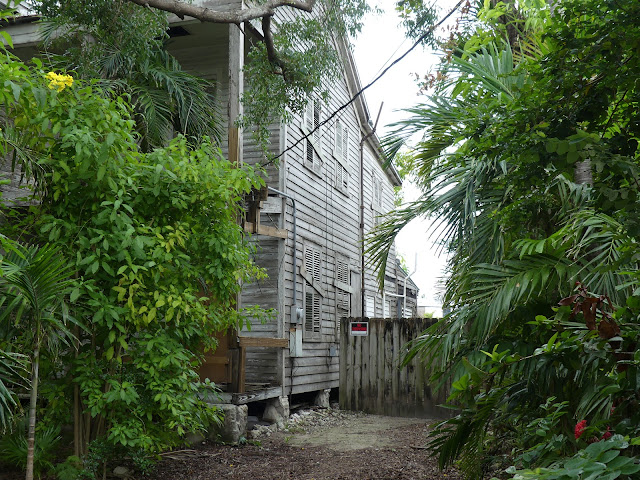 These problems were foreseen when the county put the grinder pumps out to bid and it was rumored at the time that a friend of an Important Person was pushing these pumps to get the contract. It was obvious at the time that burying an electrical pump in land liable to flood was a bad idea and some citizens have organized a law suit to get the grinder pumps exchanged for a simple and effective gravity system. I have no idea of the extent of the problem with grinder pumps but the rumor would seem to have some basis in common sense. 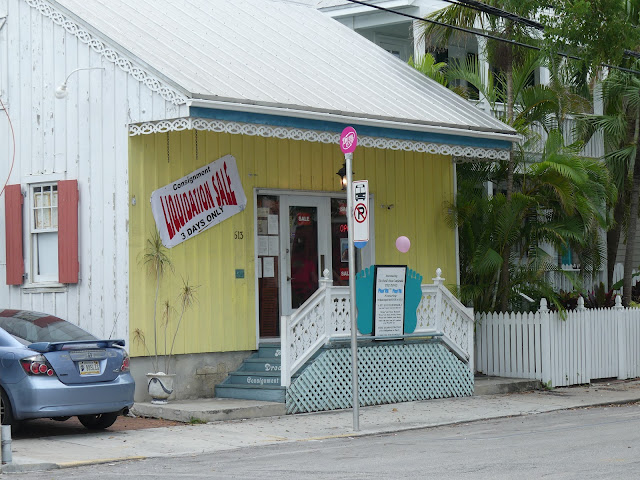 Which leaves us all wondering where we go from here. Key West missed the worst of the storm but Sugarloaf to Marathon the islands got horribly trashed. There are still people living in hotels at Federal expense. Ten million bucks is to be spent restoring a few hundred homes to a bare livable state. FEMA says they have no trailers thanks to all the other disasters that have overtaken the country this year.People are leaving the Keys. And we speculated over dinner that the numbers of working people fleeing will pick up as the rate of restoration to normality continues to lag and possibly slow down. 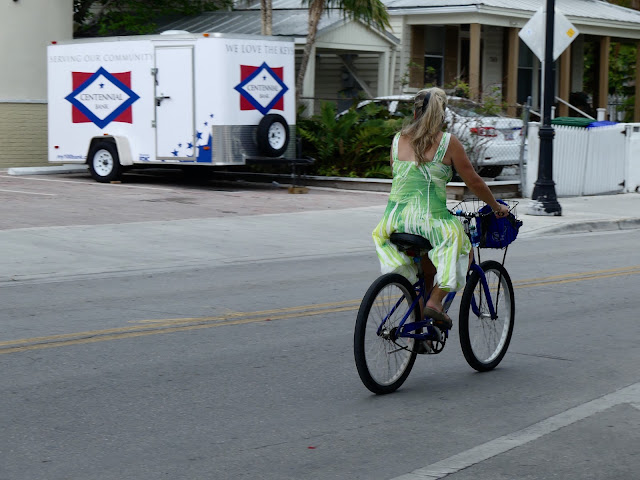 I have no idea what role climate change plays in all this but if we get a real threat of another major hurricane next summer, whether or not it hits us, the stream of people leaving will become a flood. We seem to be heading toward a tipping point for working people struggling to hold on in the Florida Keys. 2018 may be a very interesting year all round, elections, weather and Irma recovery all included.
Posted by Conchscooter at 12:00 AM No comments: Links to this post