The Brothers Karamazov In Texas

This section of our trip starts in Presidio and ends at Marfa, a town whose name makes me feel I have a lisp. In an effort to understand why it's not called Martha (so much easier!) I looked into the matter and discovered the housekeeper character's name in the novel The Brothers Karamazov is Marfa and her name was suggested by a fan of the novel at the time of the town's founding. None of which makes saying "Marfa" sound any less like a speech impediment. But first, Presidio: 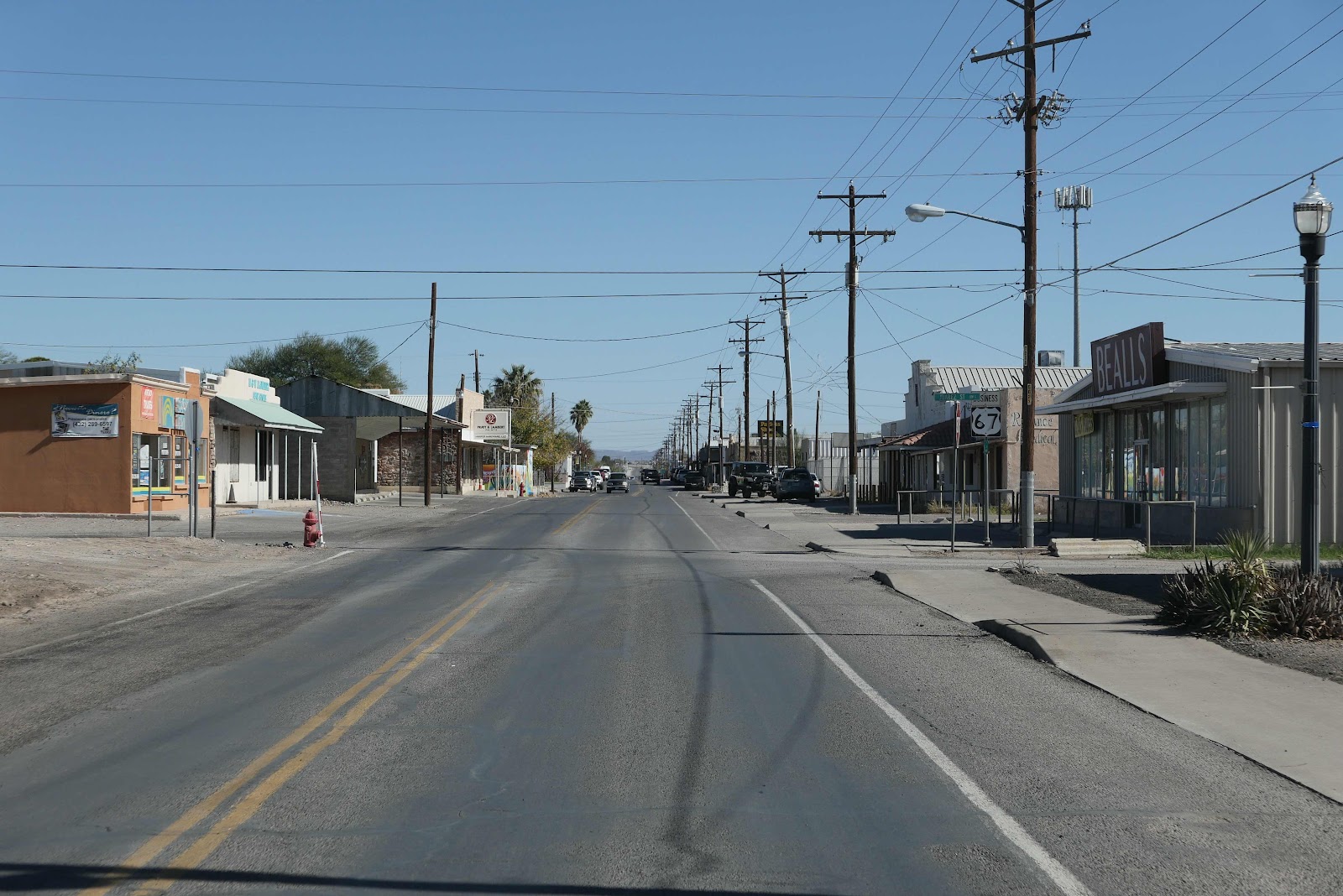 Presidio is I fear is not an attractive town to the bourgeois eye. I wanted to see the bridge for reasons mentioned in the previous essay but beyond that it was early afternoon and we were ready for lunch. 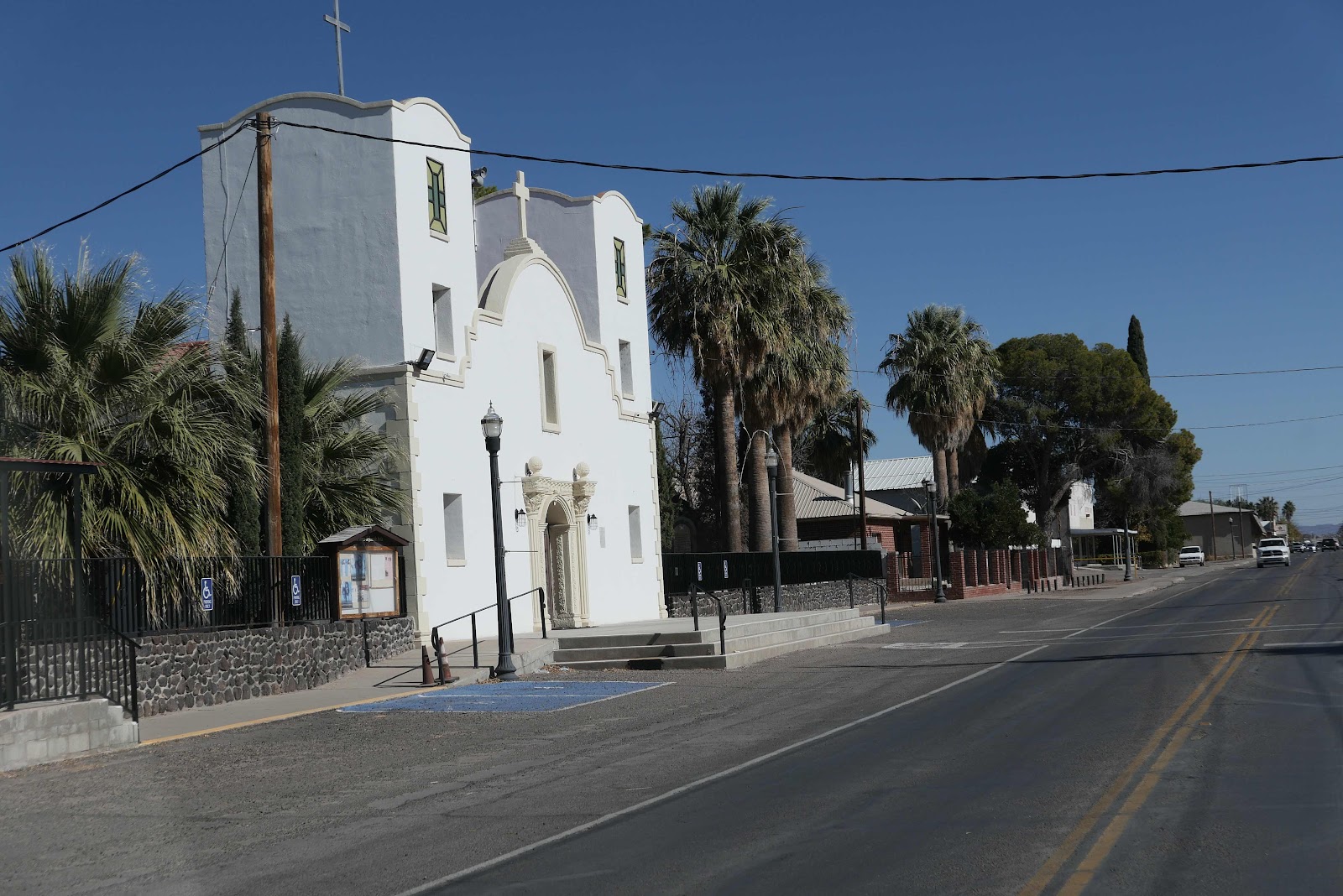 We drove back from the border looking for somewhere to pull over that might be a least bit attractive until at last my navigator found a small city park. 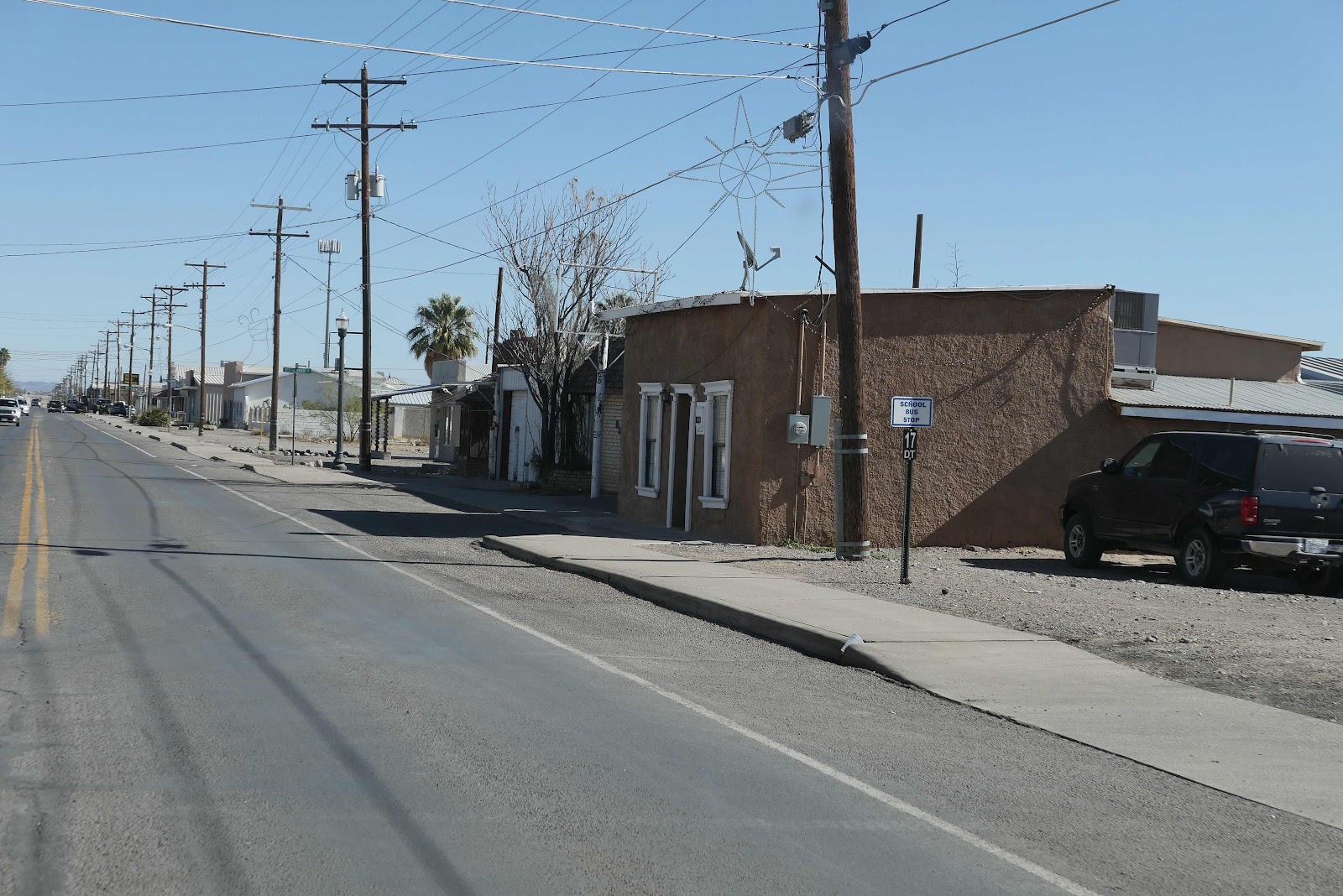 I have no idea if this is the same chain as the stores of fond memory in The Keys but my wife the attorney (she multi tasks on this expedition as attorney, chef, bottle washer, navigator and admiral) pointed out the spelling is the same: 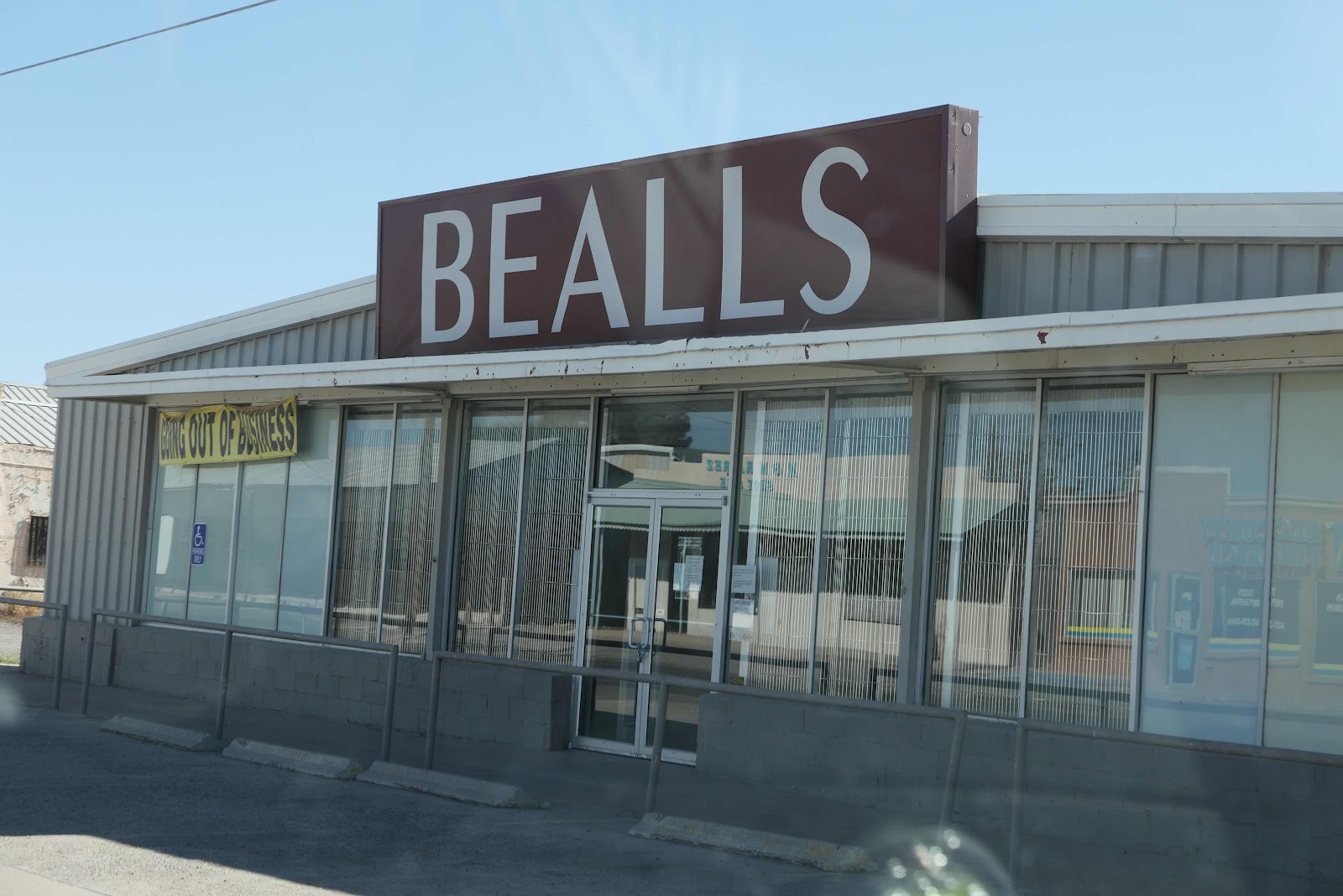 It turns out the first European known to arrive in the area of Presidio/Ojinaga was a refugee from Florida. Alvar Nuñez Cabeza de Vaca (his last name translates to Head of a Cow, just so's you know...) arrived here during his extraordinary eight year journey on foot across the continent from somewhere near Tampa Bay (probably the Bradenton area). If you haven't heard of Cabeza de Vaca you could do worse than read about his epic journey on foot. I saw a movie about him years ago and that sparked my interest. Apparently while in this area he performed a surgery on a local chief removing an arrowhead from his chest. Those early explorers, much reviled these days had some extraordinary talents and determination. 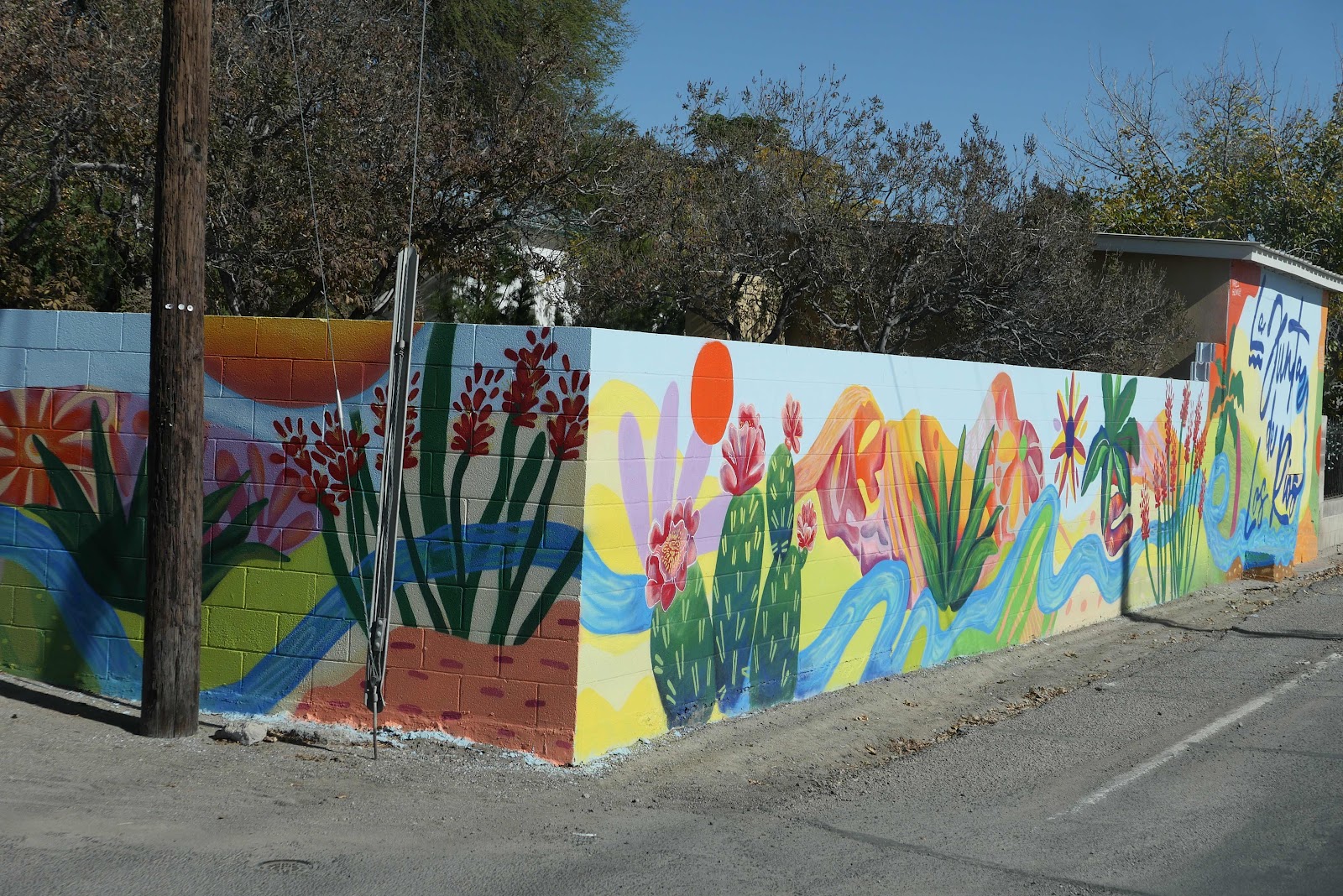 We modern explorers in our comfortable Conestoga wagon pulled up at the park and let the junior explorer out to have a look round. Layne (the chef) was in her kitchen mixing tuna fish for wraps and I stood around being useless in the sun with a camera. All was as it should be. 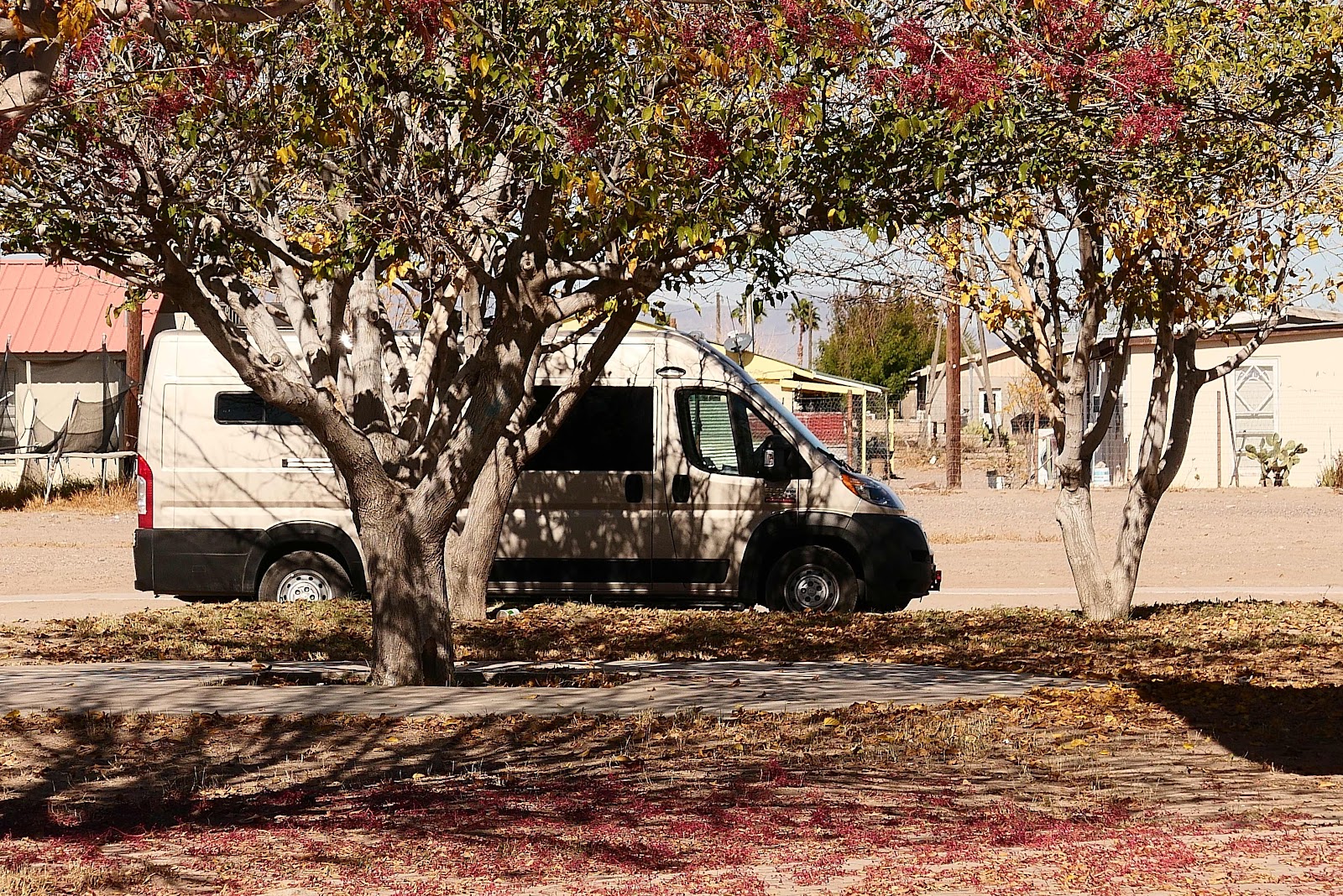 It was a dusty corner of the world which has not apparently seen much municipal involvement lately. 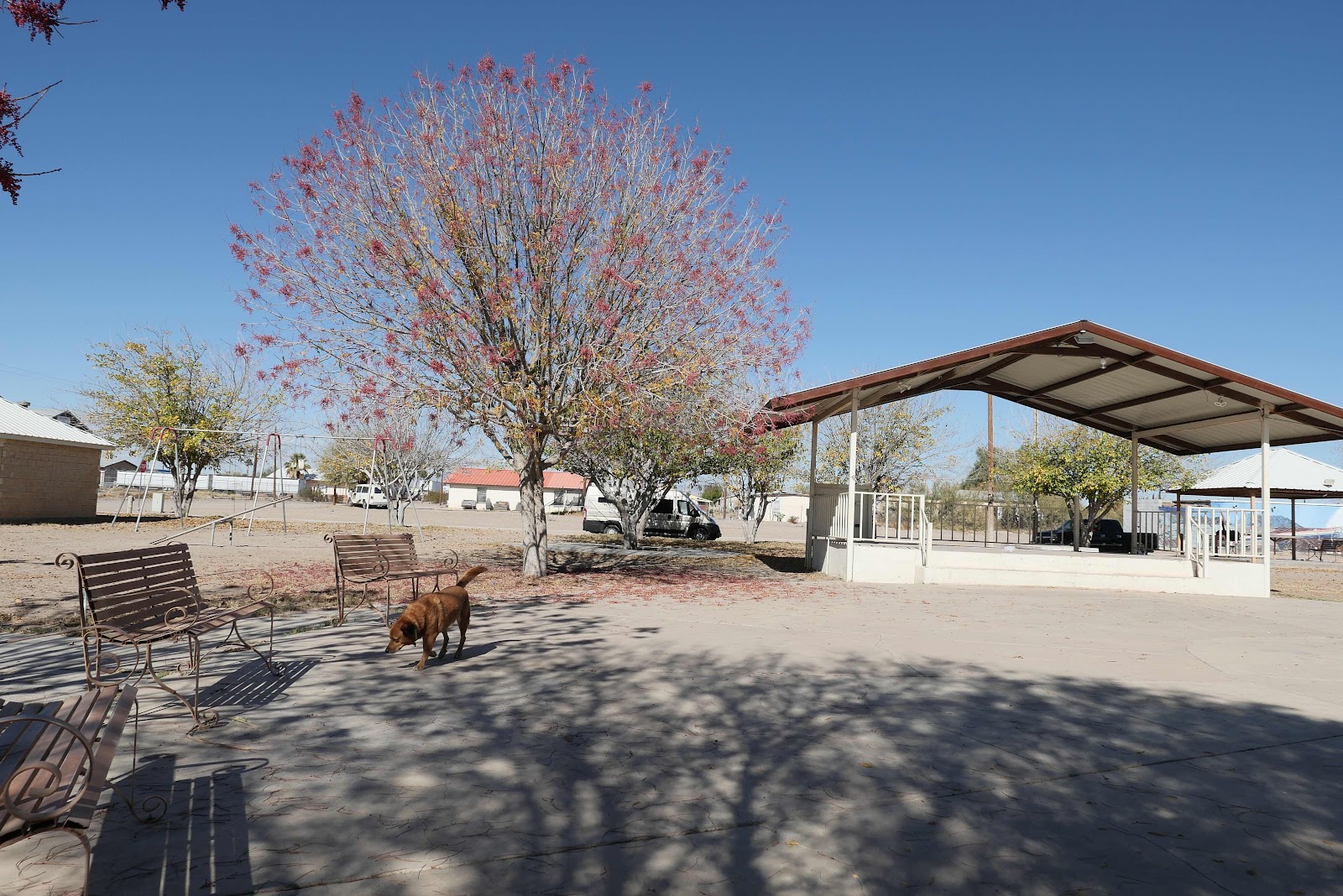 It was a lovely day and even though Presidio lacks a certain flair I was glad to be there watching Rusty managing to enjoy himself no matter what. 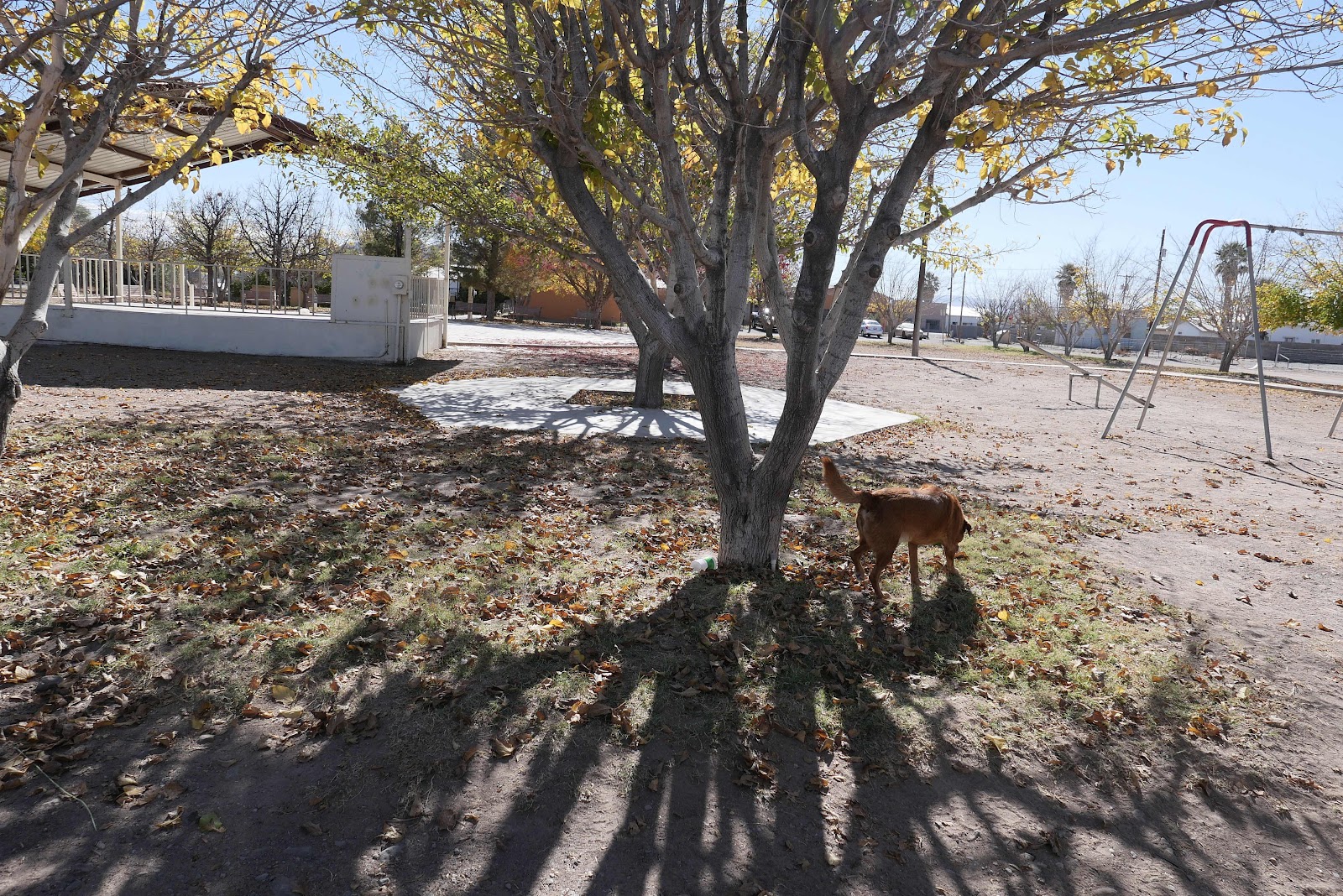 The toilet block looked splendid but I cannot say for sure as the place was locked as tight as a bank vault. Luckily we carry our own porta potty for such moments as these. 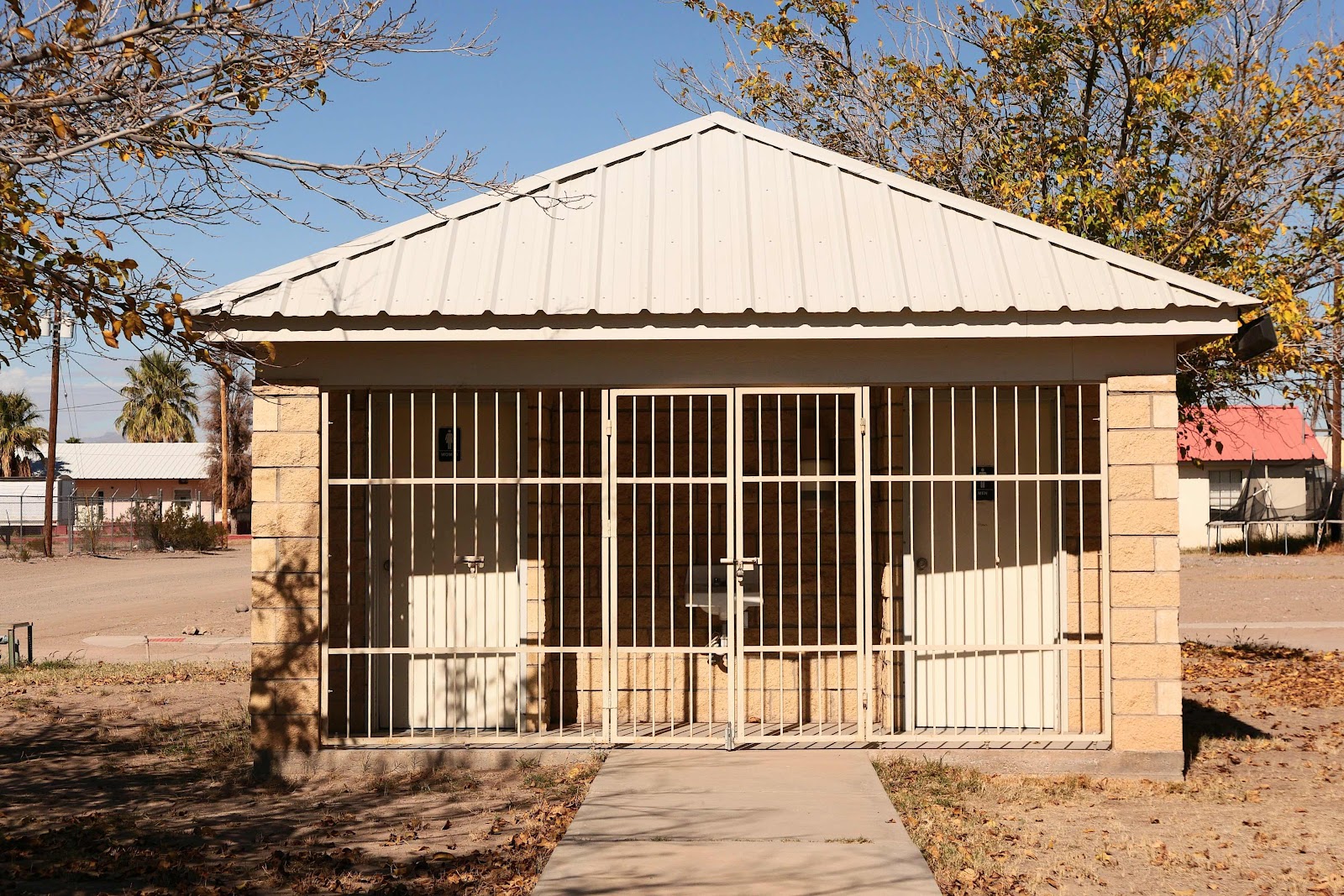 The scenery came up a bit short but I find all things interesting in my pursuit of the unknown. Curiosity keeps you youthful they say. Fearful cynics point to it as a likely cause of premature death. Take your pick. 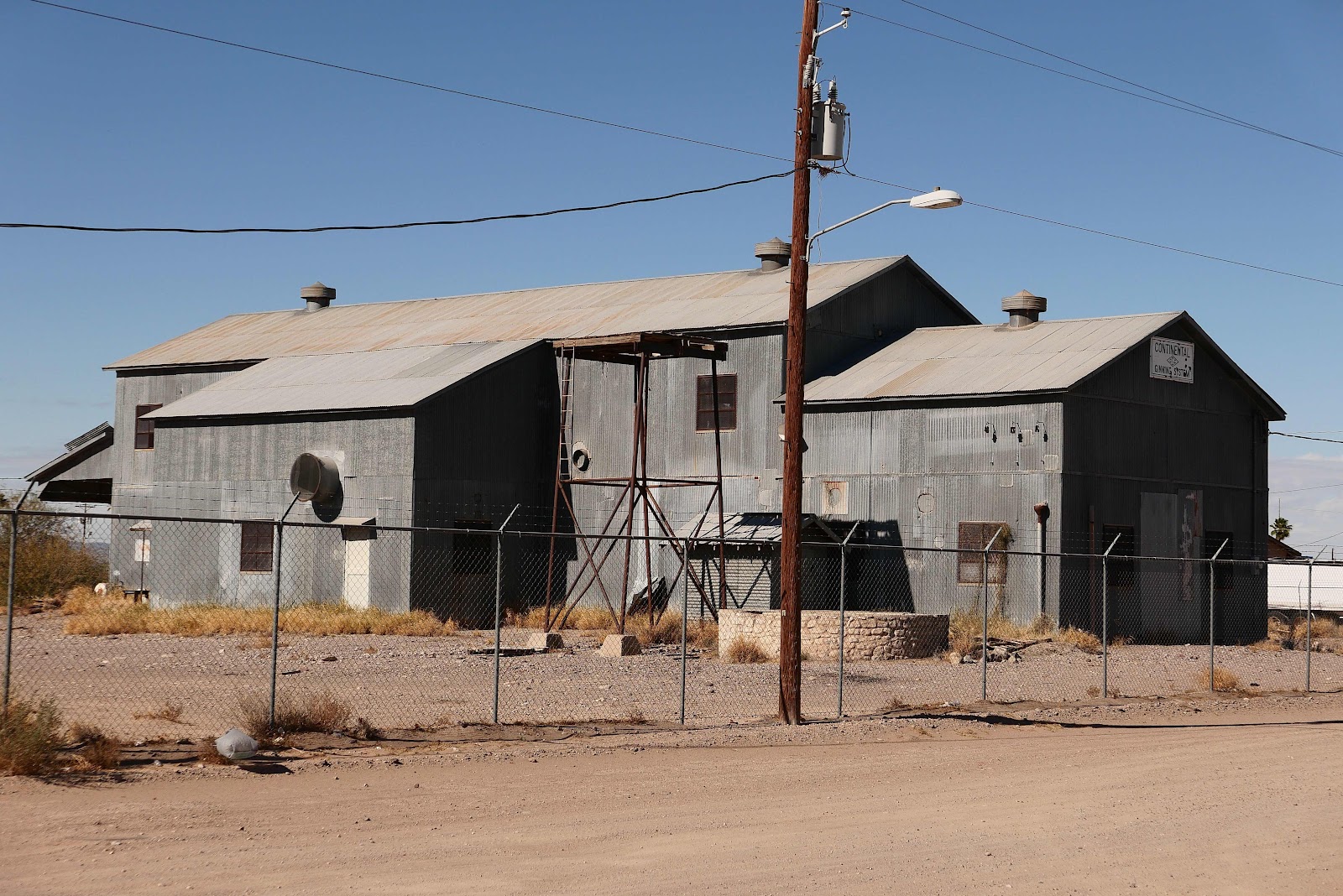 Perhaps I was going mad on our way north toward the misnamed Marfa but I saw the face of the Grinch accidentally carved into the mountainside. Later we stopped in a pull out and in a biting wind, a cold front was approaching rapidly, we did our daily video exercises to the encouragement of Daniel of the Body Project, Layne snug in the van me standing heroically out in the breeze trying to keep my post-catastrophe metal parts running smoothly. It cracks me up how you can take your world with you into the most unlikely places when you live in a tin box. 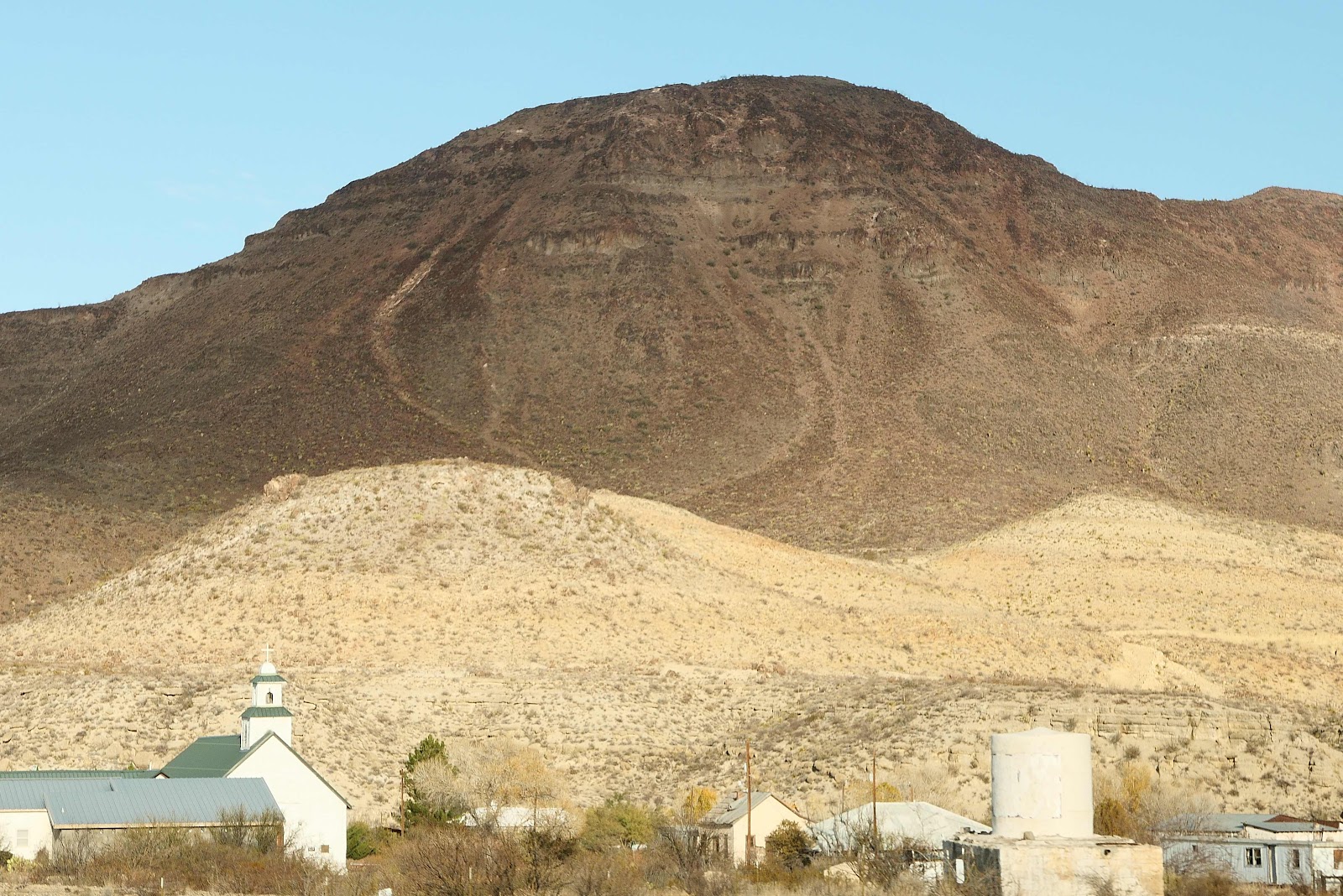 We did eventually get to Marfa but first I fear I must be honest and say I was a blithering idiot on the way there. I trust poor old anonymous will weigh in with some heartfelt sarcasm from the anonymous couch of the permanent stay-at-home and fearful troll to keep this happy traveler in his place! This was our goal, the famous county courthouse and West Texas landmark: 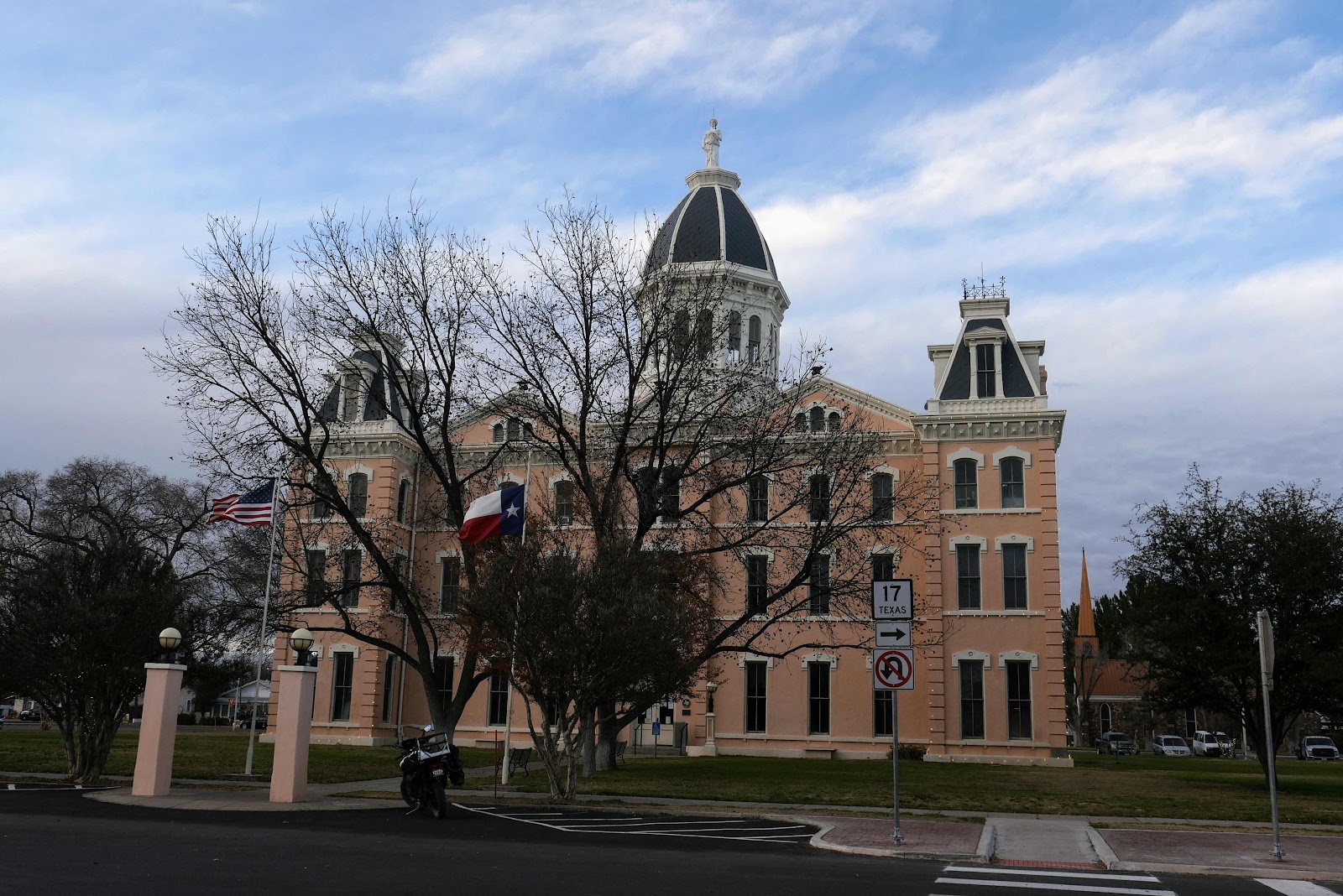 The drive north across wide open desert views felt liberating. So much so Layne got in the bed and started her shoulder exercises, necessary to keep bedding in the new shoulder joint she was gifted in Tampa in a previous life. 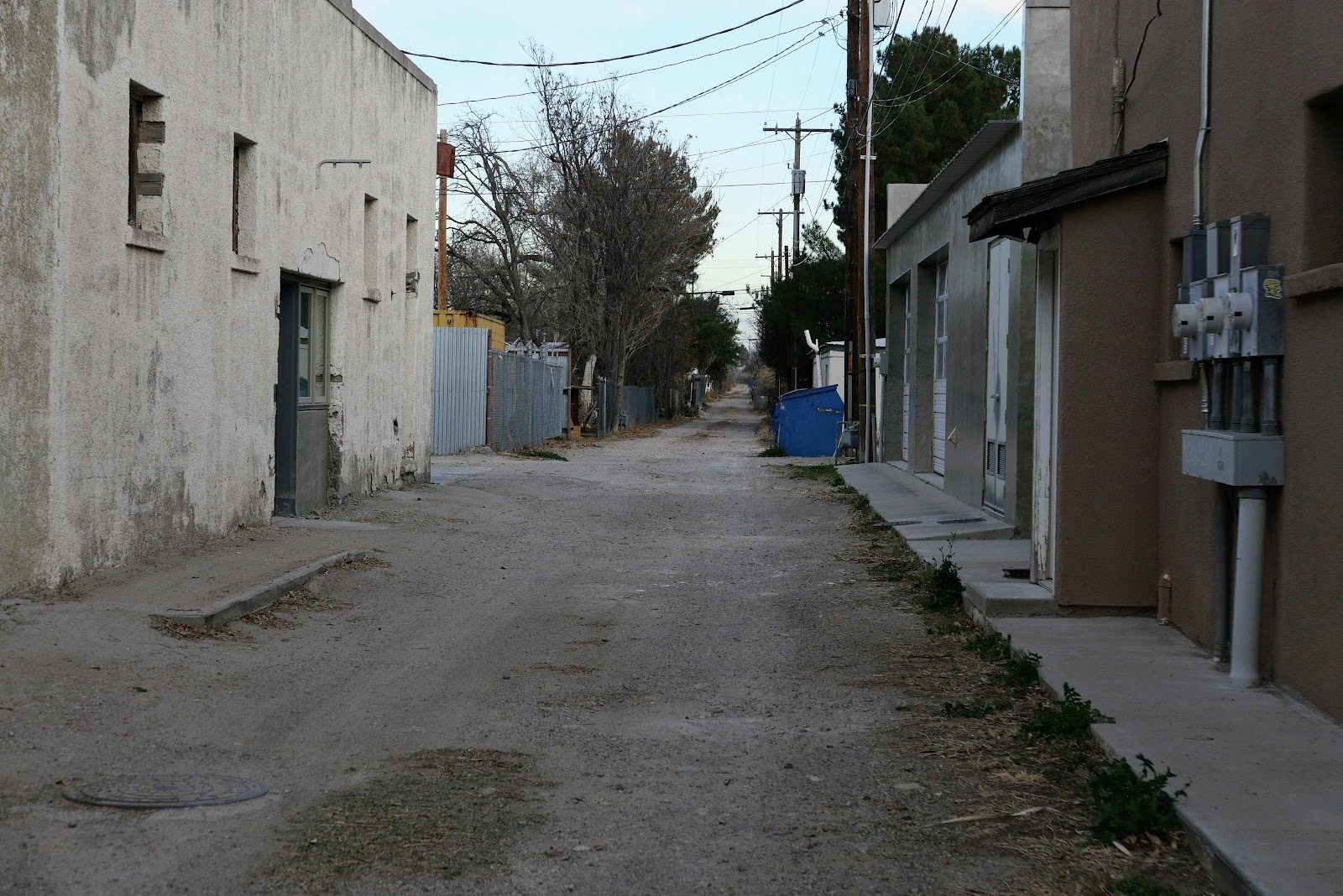 “Road work ahead” the sign said. It wasn’t road work it was La Migra setting up a temporary control point on the highway to Marfa. Oh shit I thought Layne isn’t supposed to be in the back. Too late! We were jammed in line. The work truck in front had four laborers in it and I bet they got questioned as that would be a great disguise for a Mexican to travel inland. A fruity slow moving Campervan? Surely not. I swear I thought he motioned me to keep moving so I rolled on through. In my mirror I saw the young border patrol officer climb into his patrol car not aggressively but with an air of resignation. I kept driving slowly hoping for the best. 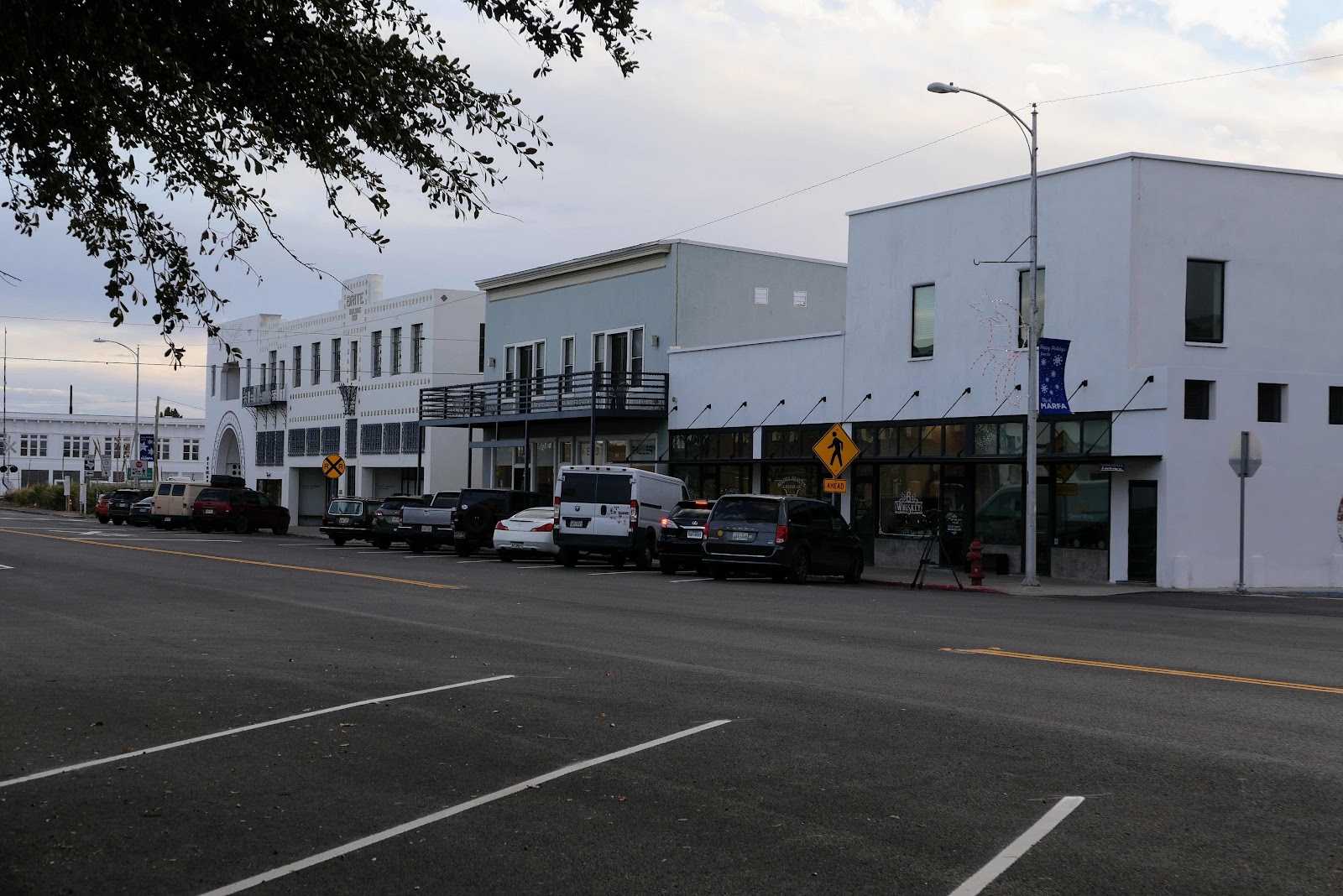 It went well actually. I’m glad it wasn’t Officer Frank Betz this time who delighted in pulling me over on the Boulevard and yelling at me for some perceived infraction or another. Odd that because I put up with his radio mumbles much more patiently than some of my colleagues in dispatch! I miss him when I’m getting pulled over apparently. He and I worked together for a very long time and I have fond memories of stealing his French fries at the dispatch desk. 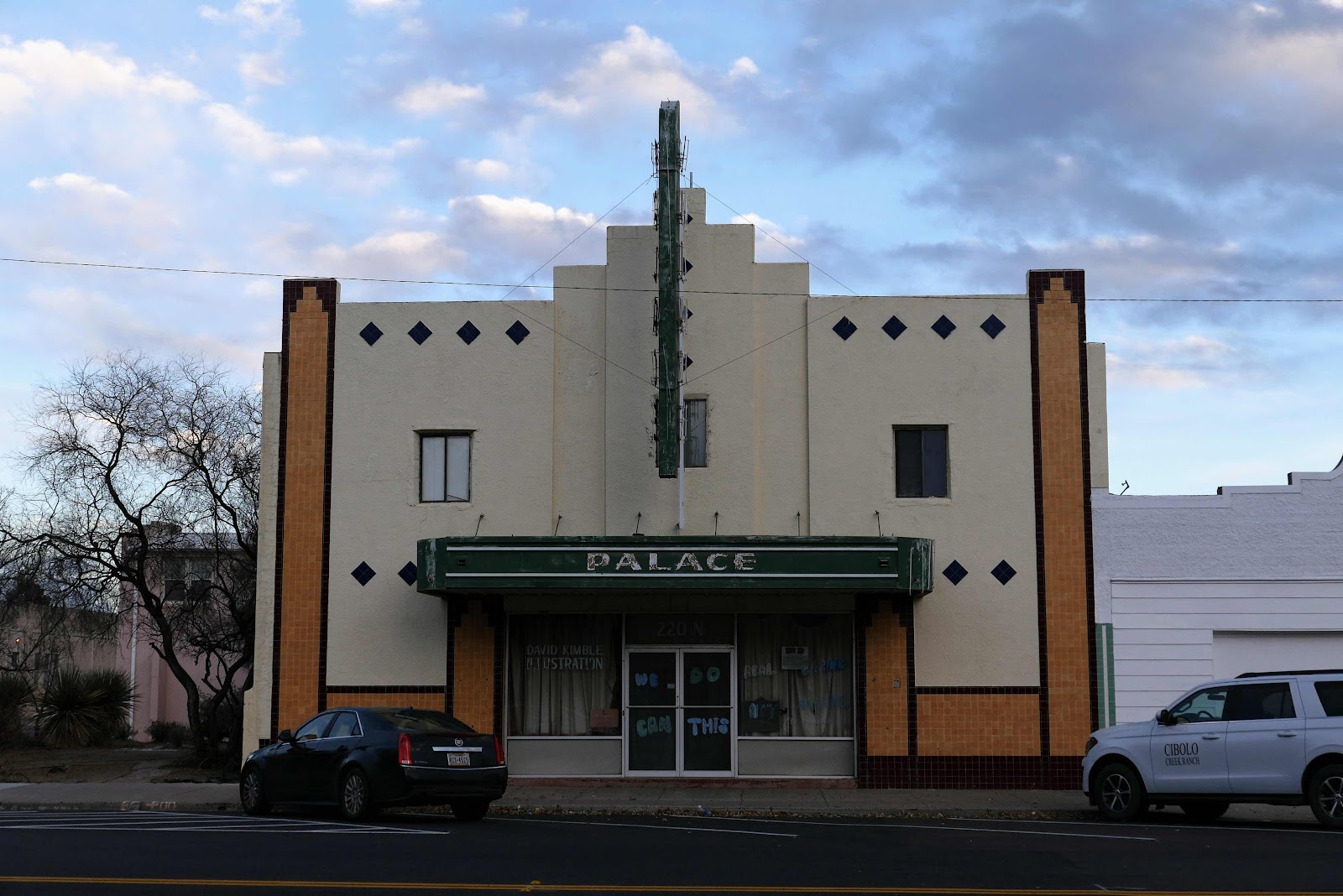 Anyway the young border patrol agent was very suave and took a look apologetically in the back and talked to us for a bit (No he never had seen the magical lights at Marfa) to let his colleague know he had given us the third degree and off we went. He never did ask how I passed the checkpoint alone in the front seat and when he pulled me over Layne was sitting there all belted in. Perhaps I did blow through guiltily faster than I thought I had. And no, I never mentioned I had been a dispatcher...blah...blah...etc. I like to take my medicine when I deserve it. 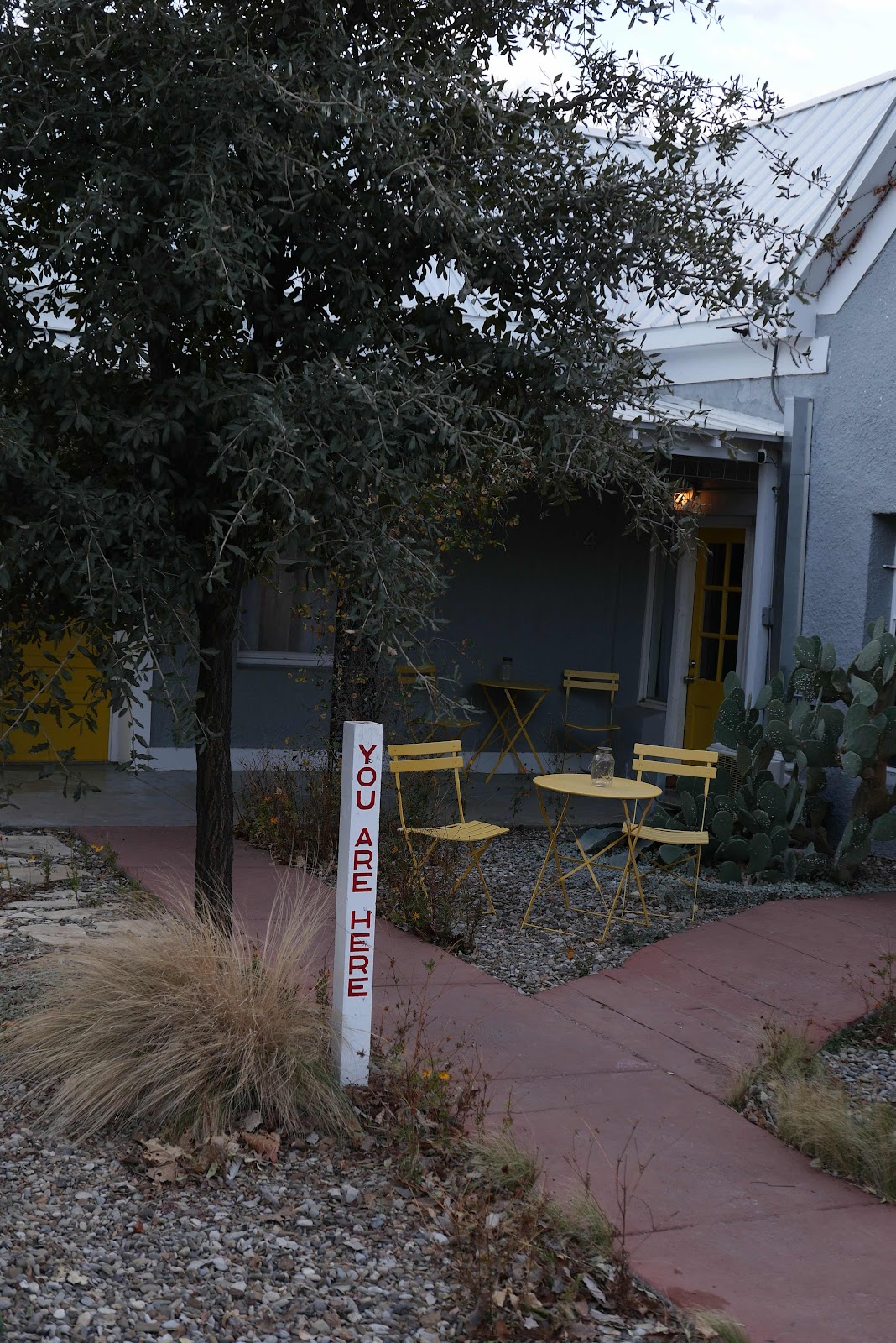 The bloom was off Marfa when we got there. Never did weather transform so quickly, from a lovely 70 degrees in Presidio down to 40 degrees, windy as hell, with temperatures plummeting to 24 degrees overnight in Marfa. It was a shame really as Marfa is a funny little town, an outpost of culture and the arts, pretension perhaps and signs of some name brand madness in a world of down to earth ranching, but I should have liked to have seen more of it. Curiosity moved me to just see if there was a dial tone in the payphone handset and I heard crooning instead. 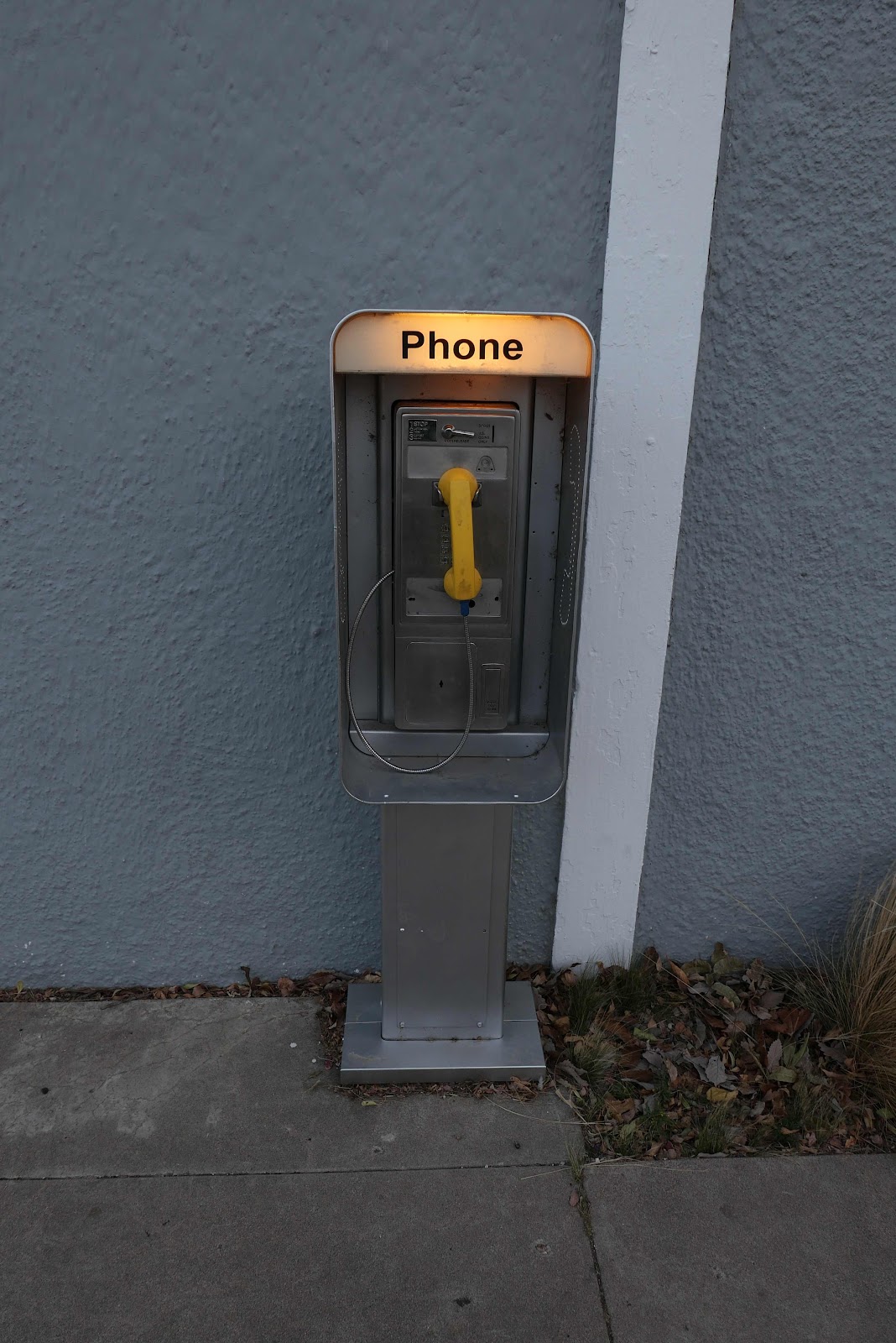 We parked opposite a luxury hotel of extreme loveliness, bright with Christmas decorations and the warm glow of yellow foyer lights on a frosty evening. "209 dollars," I read to my wife from their web page, "Forty dollars for Rusty and a room with a fireplace and a balcony." She glared at me and we drove off. The Hotel Paisano is named not for an Italian immigrant but the nearby mountain range. 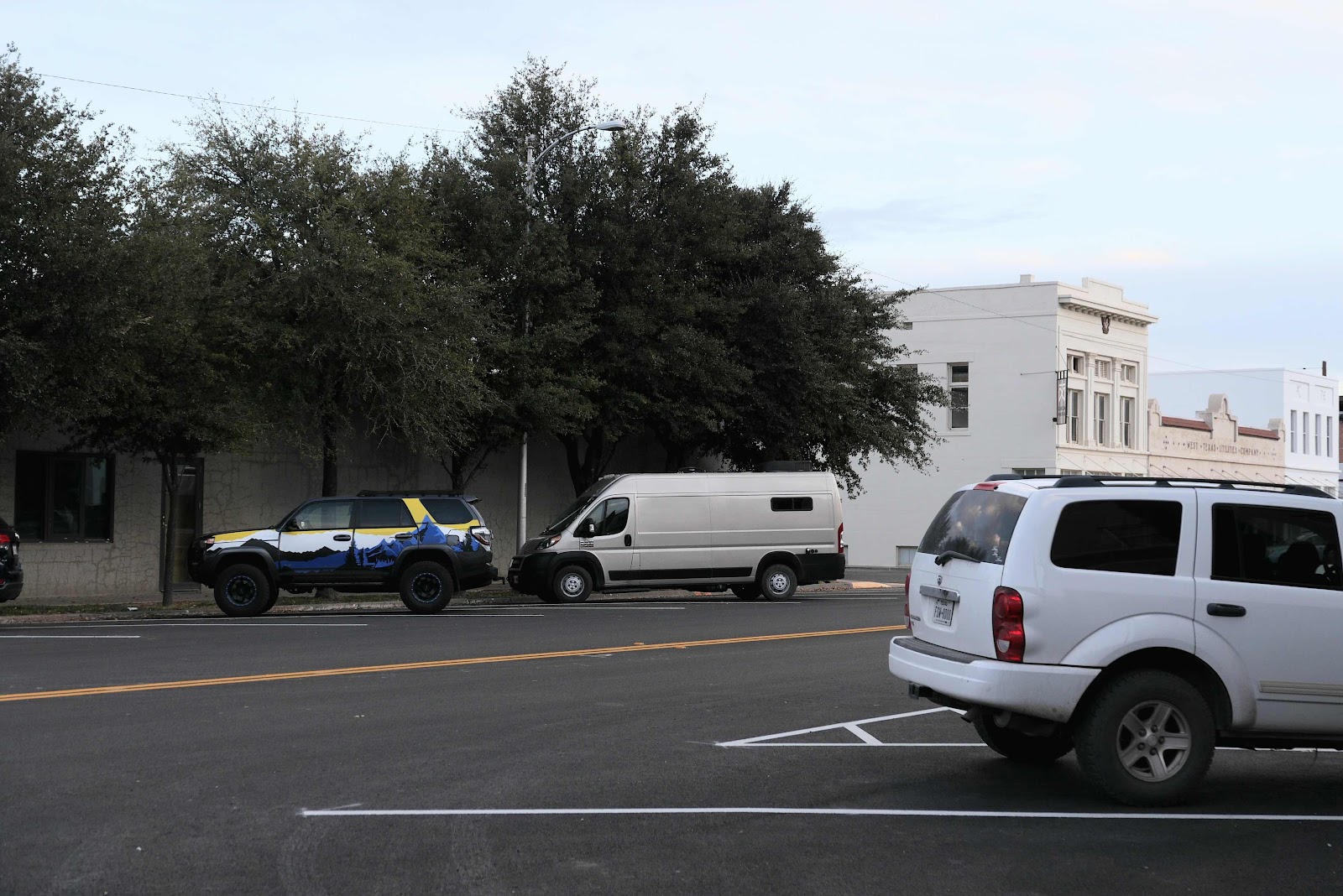 Blame the railroads for development around here so this is just like the Keys where hotels sprouted as soon as rails brought fresh visitors. 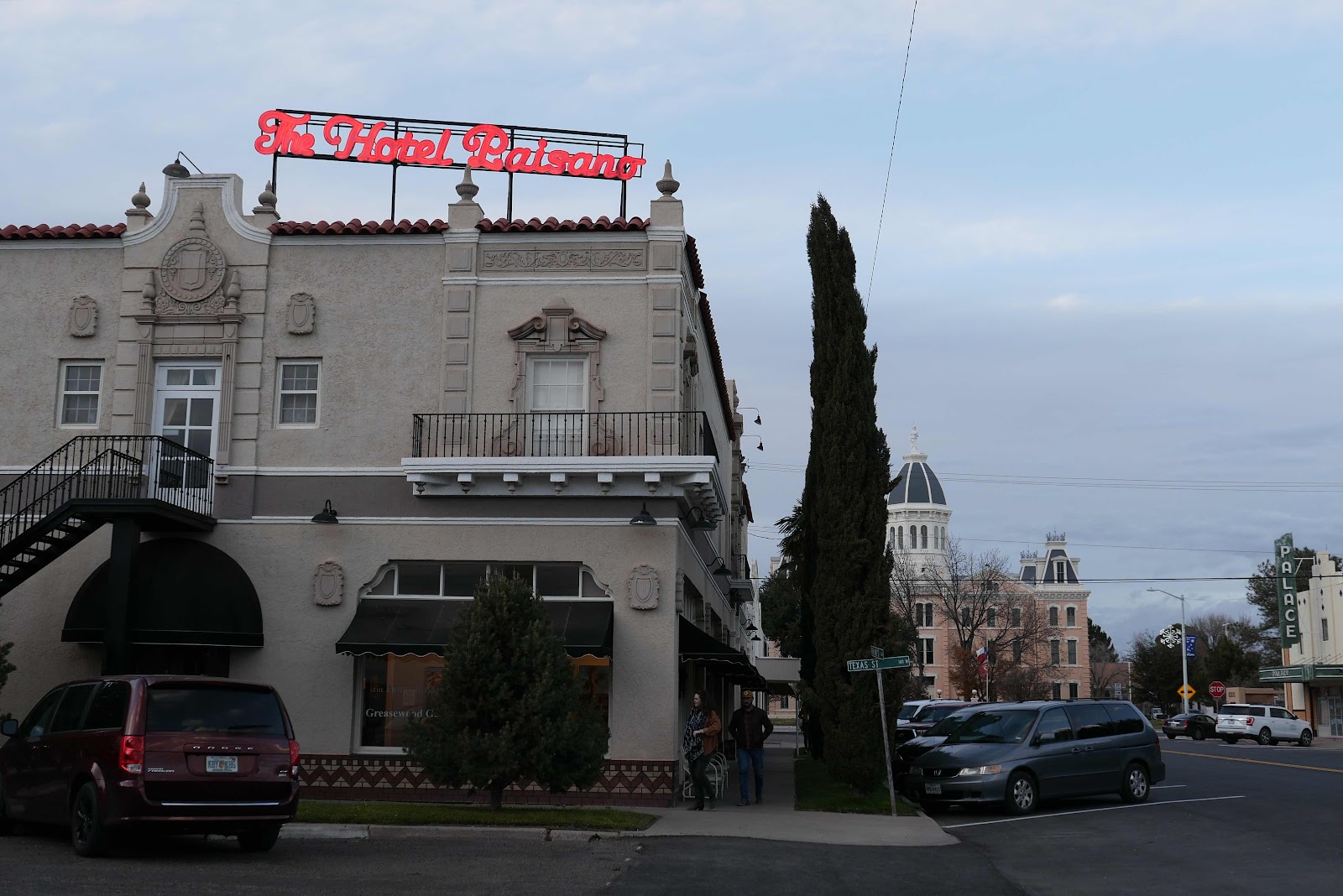 High end clothing available for those who understand that stuff. 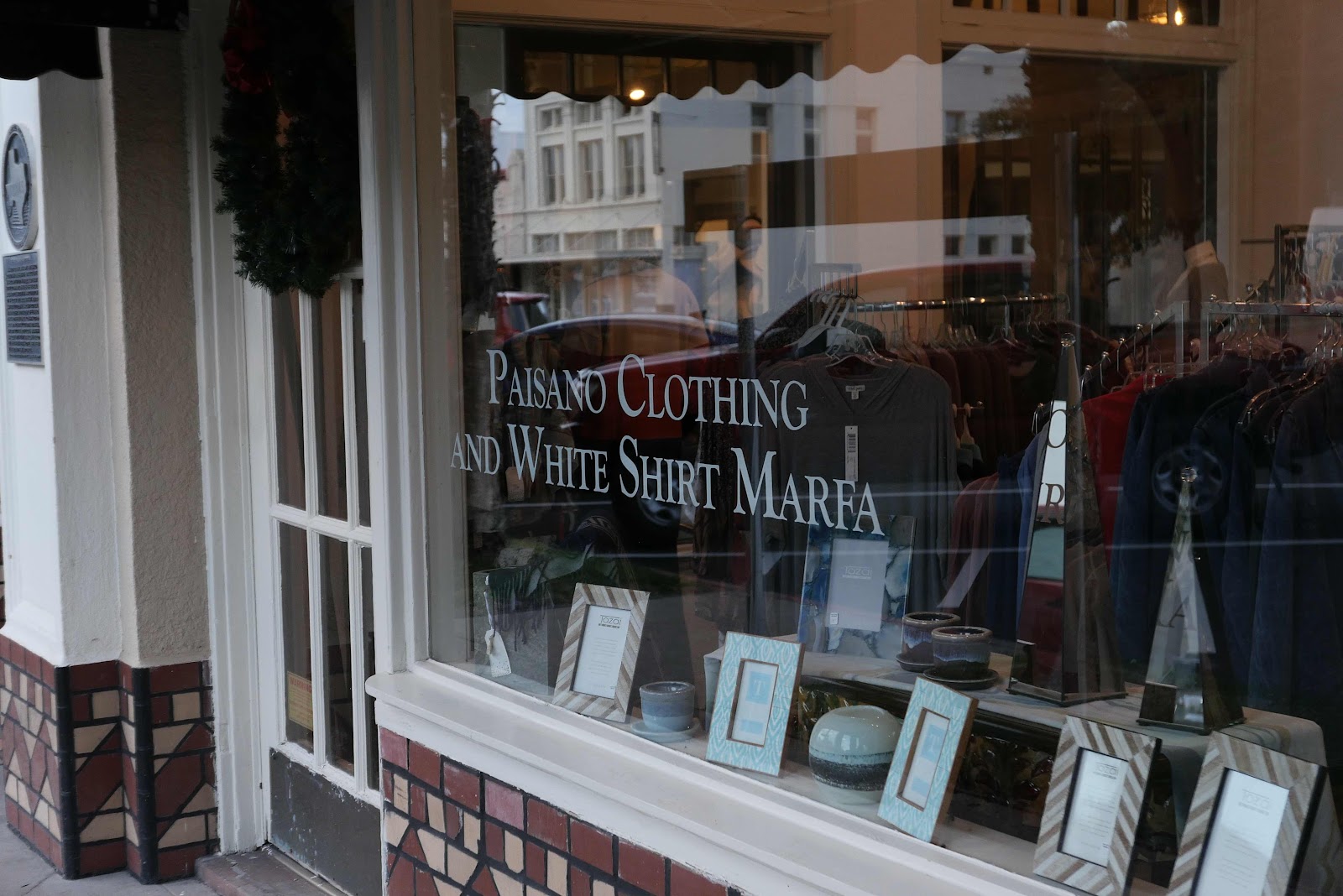 Layne gave up and retreated to the van out of the wind but Rusty was made of sterner stuff and I was attached to him by bonds of friendship and more importantly a leash. So I was stuck out there. 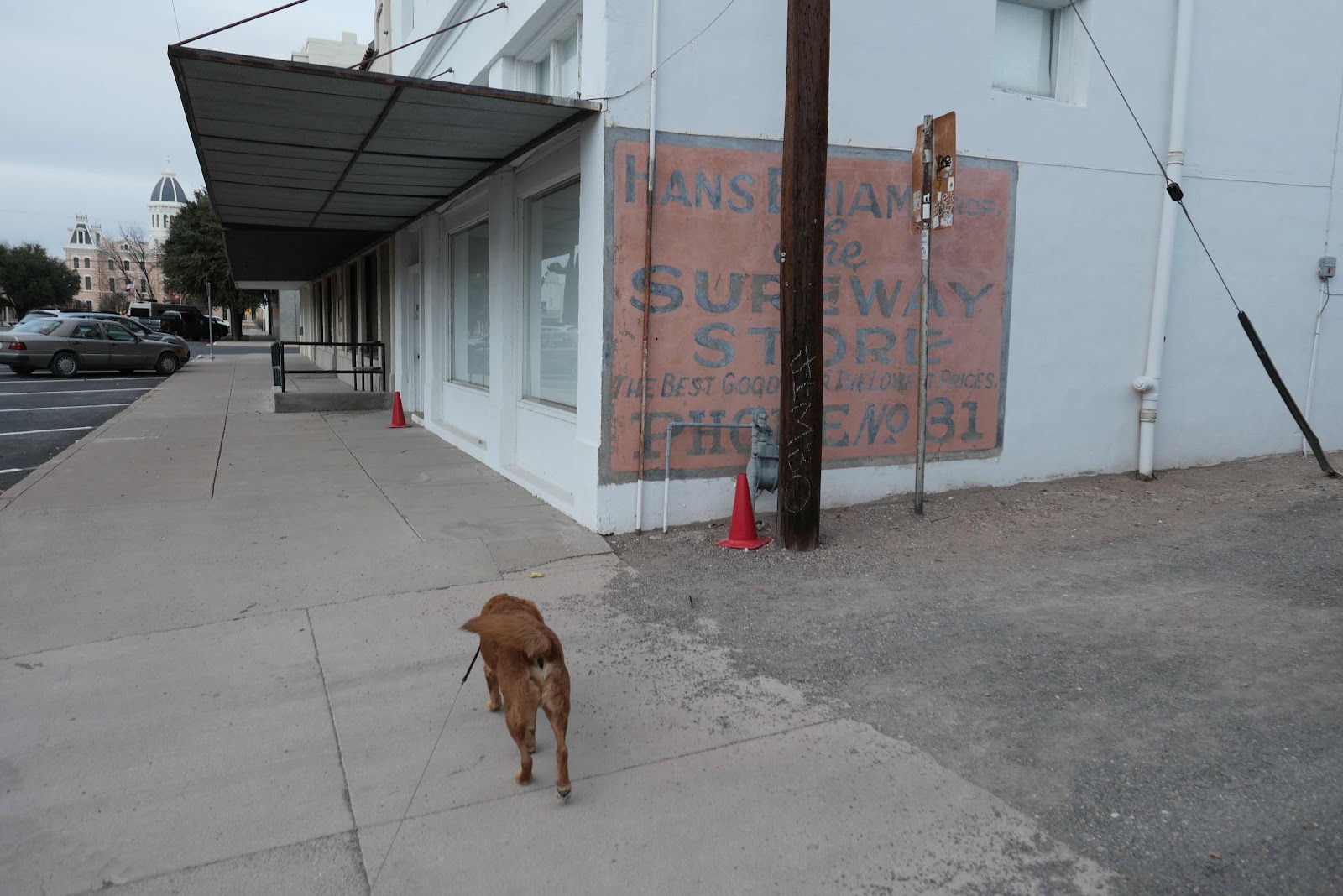 Eventually I had enough and we made for our chosen (free) sleeping spot. Controversy surrounds the Marfa Lights phenomenon. Apparently a local landowner paid for the rather splendid viewing spot built in the desert on Highway 90 east of the town by about a dozen miles. 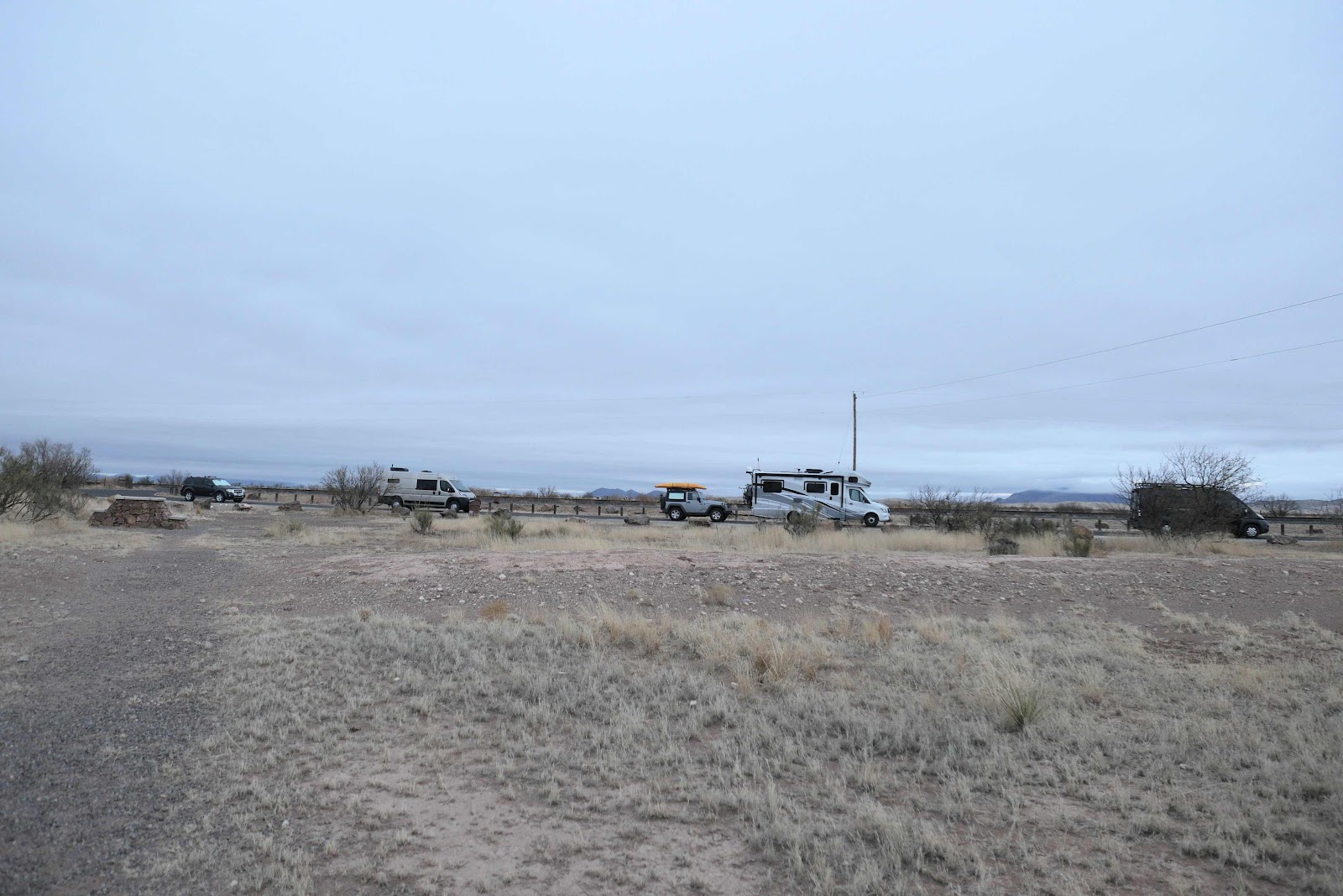 The building houses toilets (very important!) and a platform to sit or stand and wonder at the desert night sky. There are glowing red lights included to let you see your way without destroying your night vision but I am told the mysterious lights in the desert are a glowing phenomenon seen clearly from time to time. 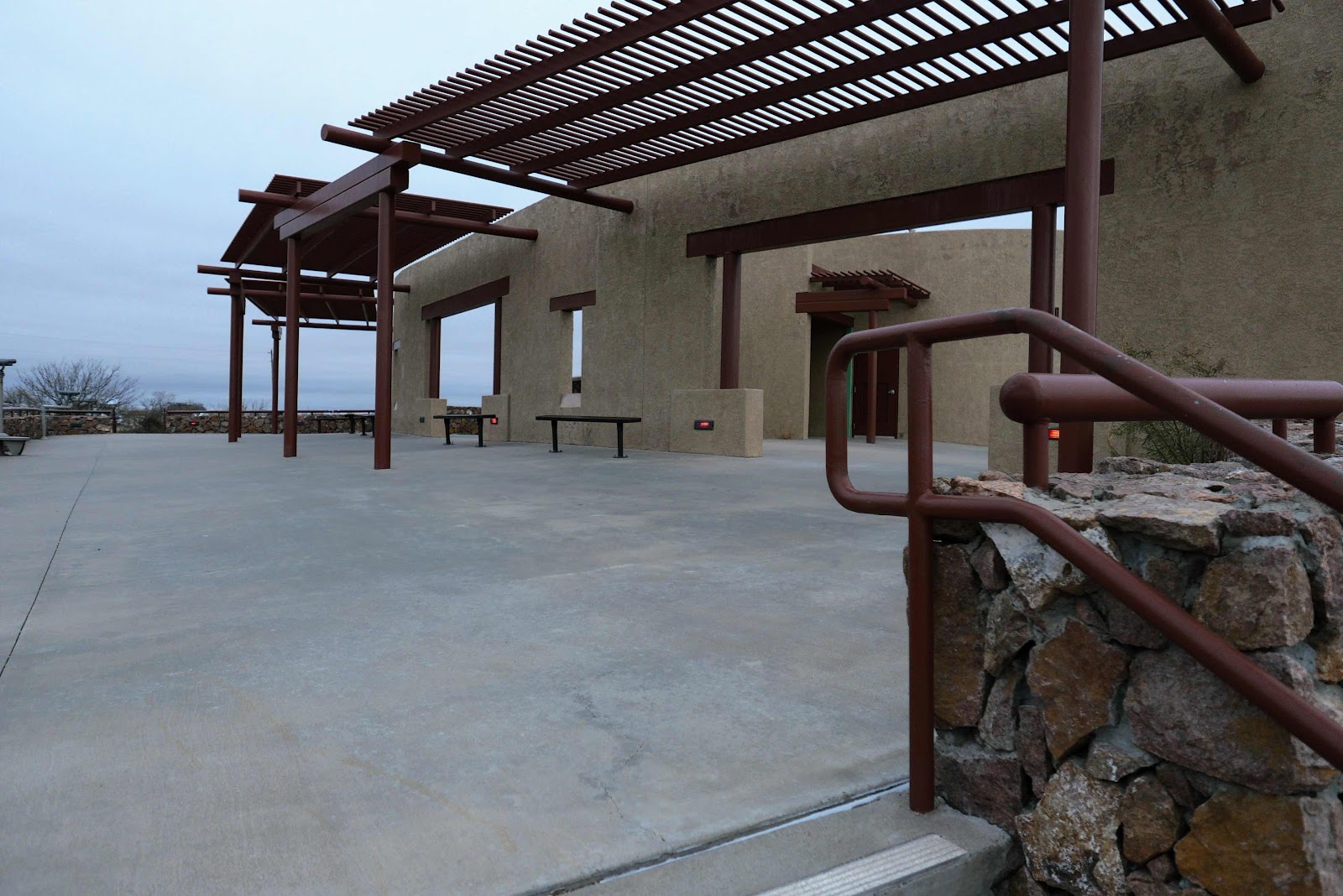 I gravitate to the theory that the lights are an outgassing from the Earth's crust set alight by electric activity in the atmosphere. I am no expert and have never seen them but the alien spaceship theory leaves me cold. Years ago I heard a good explanation for the Bermuda Triangle which is an area of ocean that occasionally drops planes out of the sky and sinks ships at random. Scientists as you can read handle this stuff with ten foot poles! 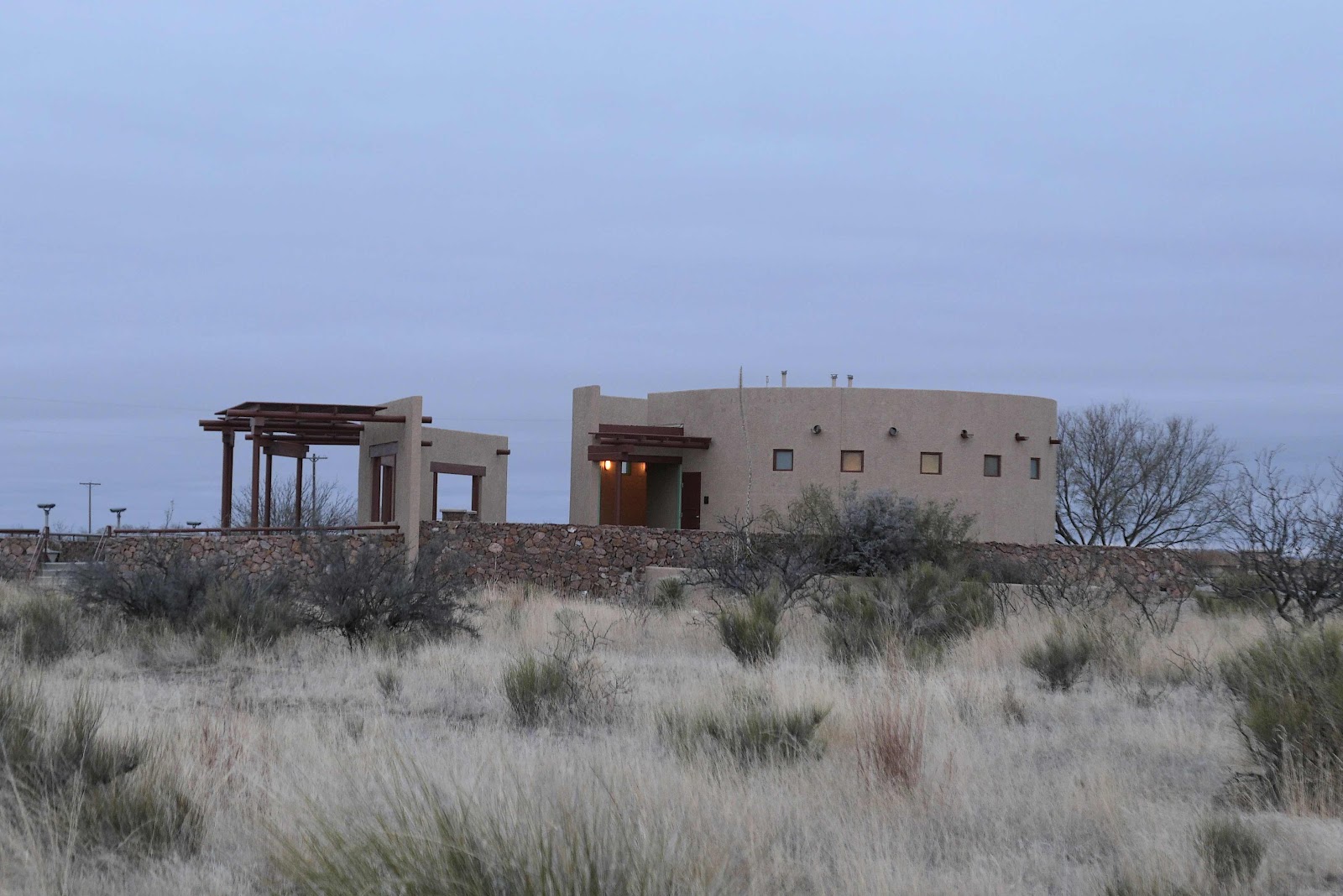 That theory explained that methane gasses rising at random from the ocean bed come up under ships destroying their flotation in the dense water and similar occurs to planes flying through the sky that encounter one of these invisible pockets of very light gas. I don't see why a similar theory wouldn't work here. No one knows so your choice of theory is as good as mine. I liked this Colorado Promaster with Citroen badges fore and aft. In Europe the Promaster is sold under several names including the Citroen Jumper. Our Promasters are actually based on the original Fiat Ducato. 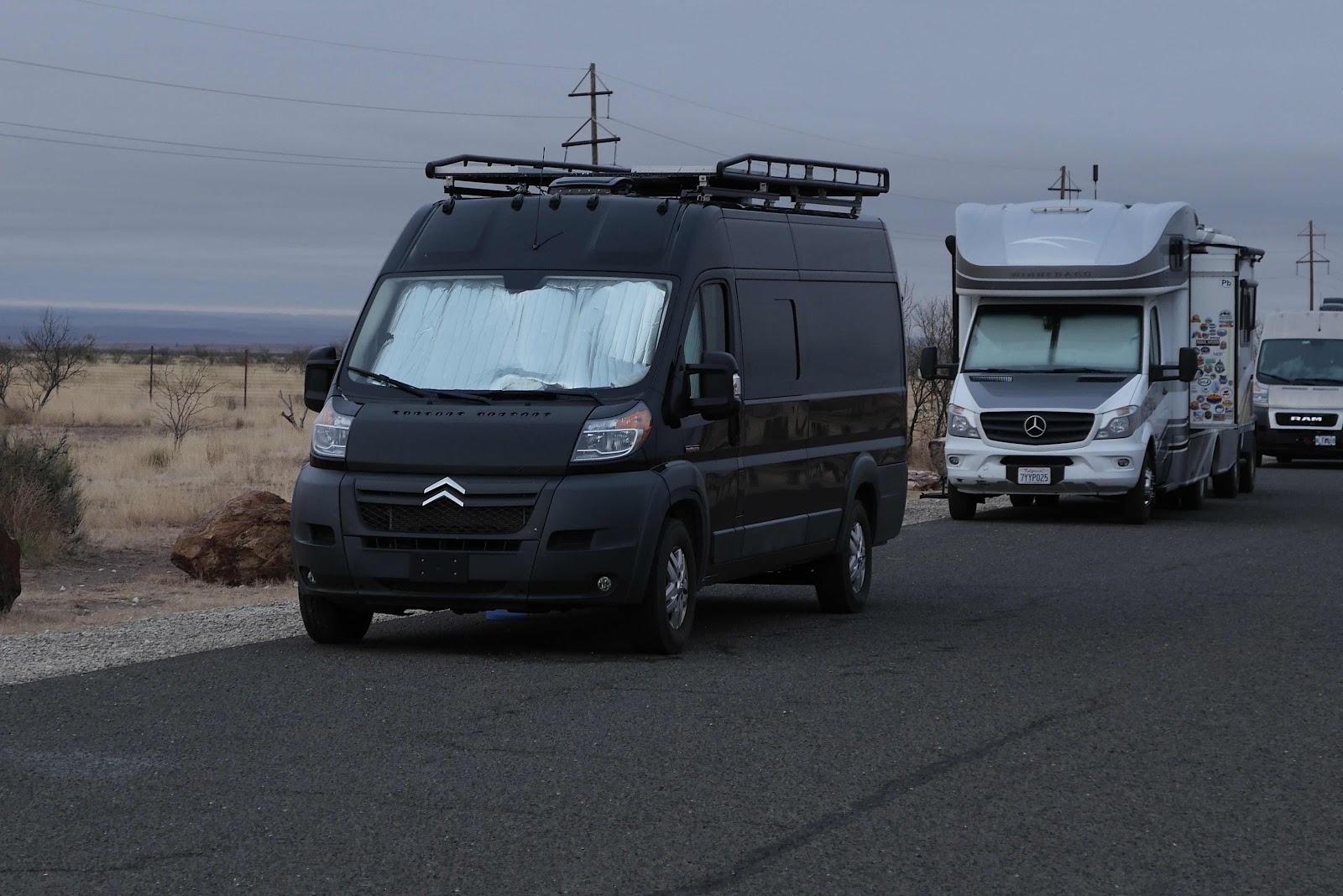 It was a freezing cold night with howling winds rocking Gannet 2. We had our insulated window covers in place and our little portable electric heater was on full blast (at 100 amps!). We had a strong Verizon signal so watched the Holiday editions of the British Baking Show trying to ignore the howling storm outside. It was very snug. 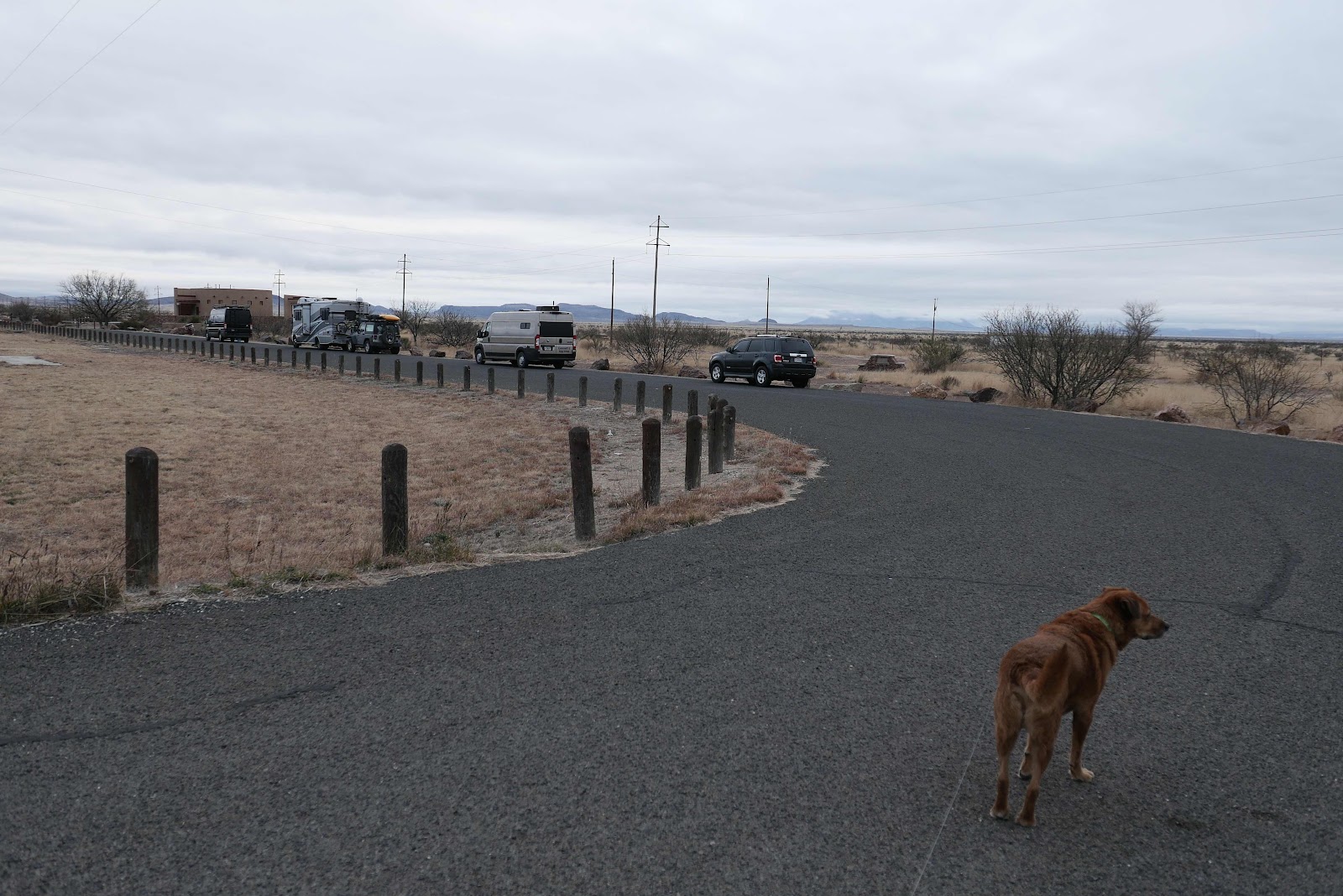 The overnight temperature dropped to 24 degrees cold enough for Rusty to elect to sleep (soundly and loudly) on our bed, but he does not like to be covered, unlike us as we burrowed deep under our duvet sleeping bag. 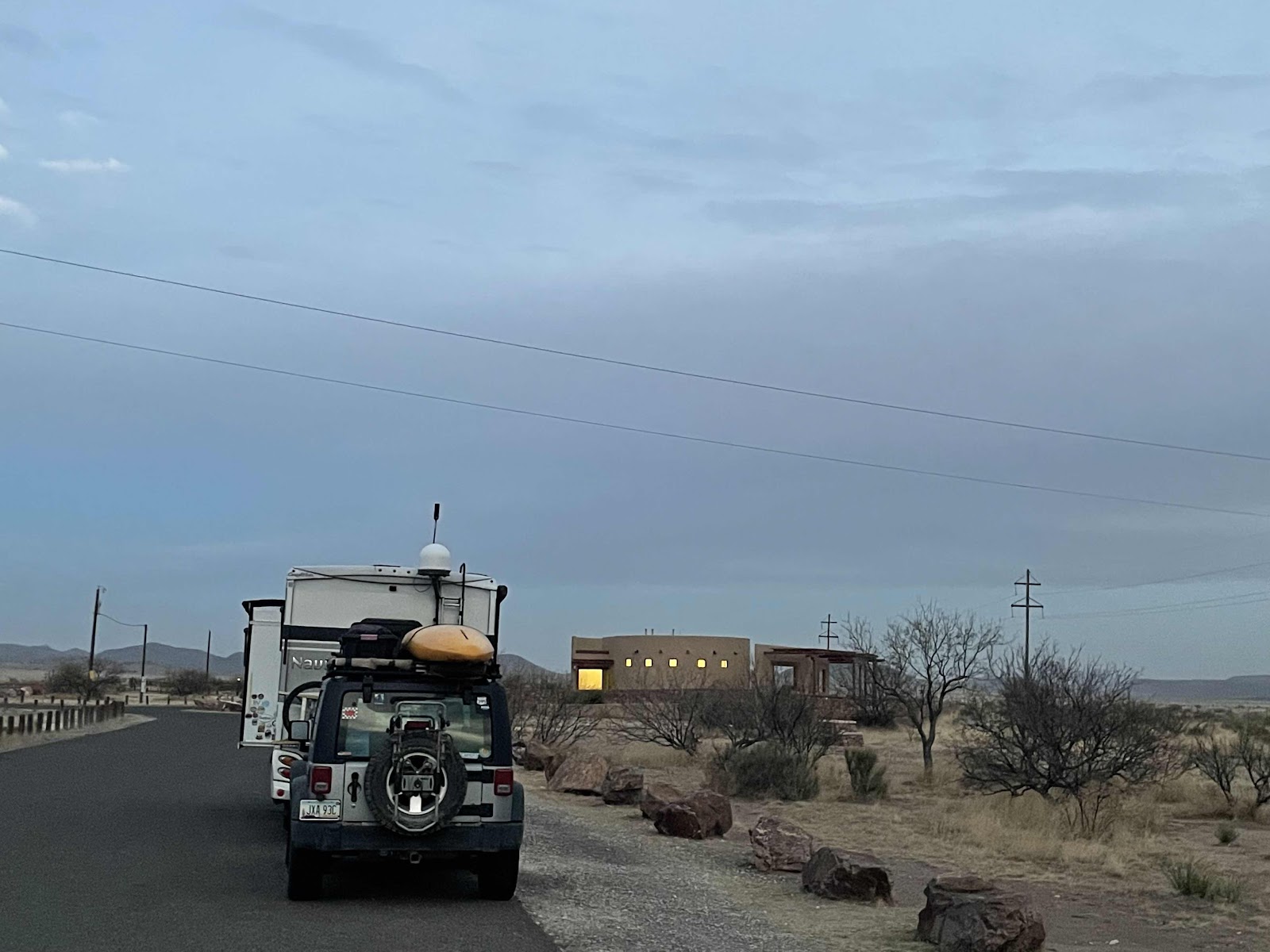 If there were any lights we didn't see them, nor did we try. I did pass a couple of huddles of young people under blankets when I took Rusty for his last (freezing) walk of the day. I thought they were mad but it was a Saturday night (I think) so they obviously thought it was a good way to spend a weekend  evening. 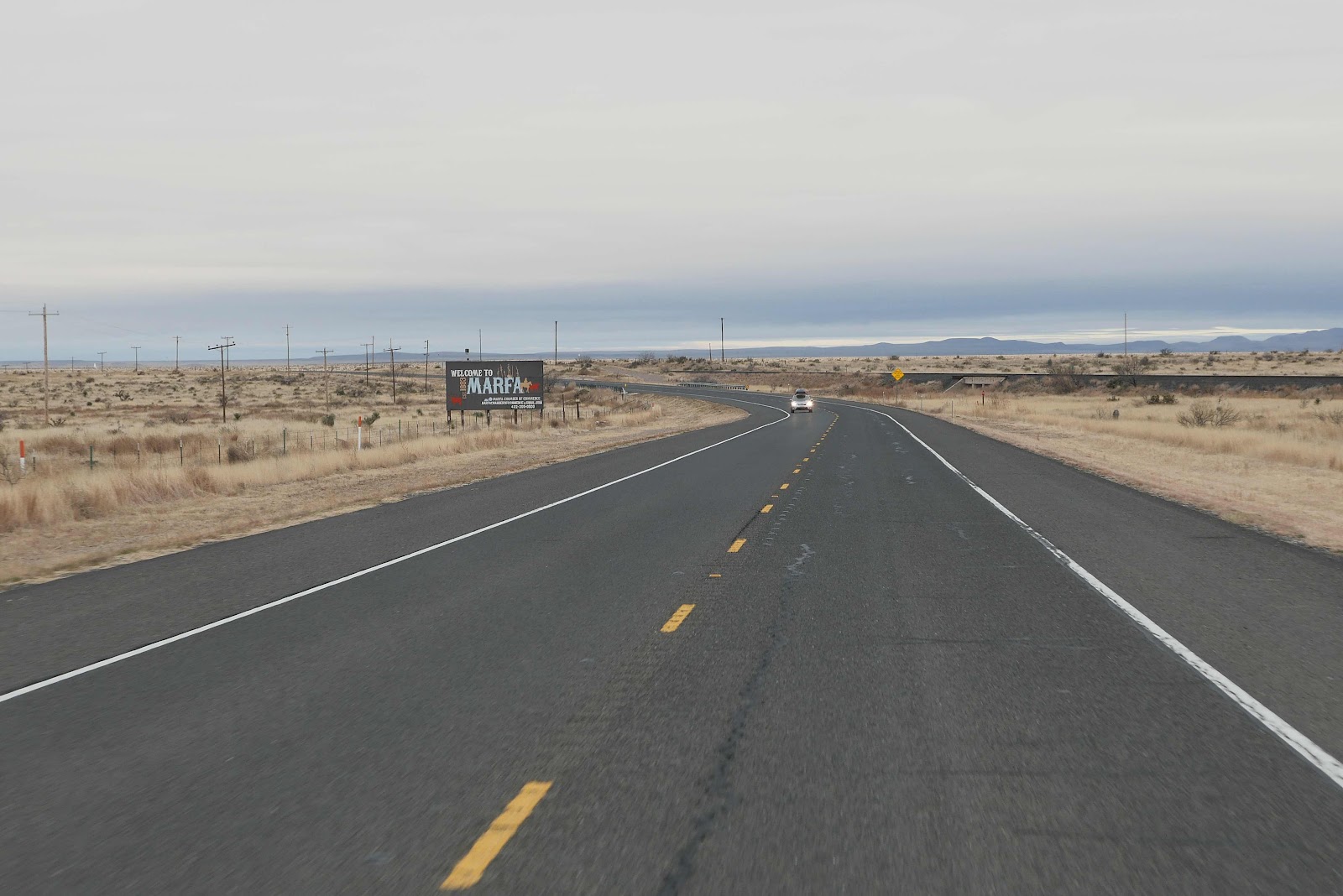 We weren't quite done with West Texas just yet!
Posted by Conchscooter at 2:00 AM 4 comments: