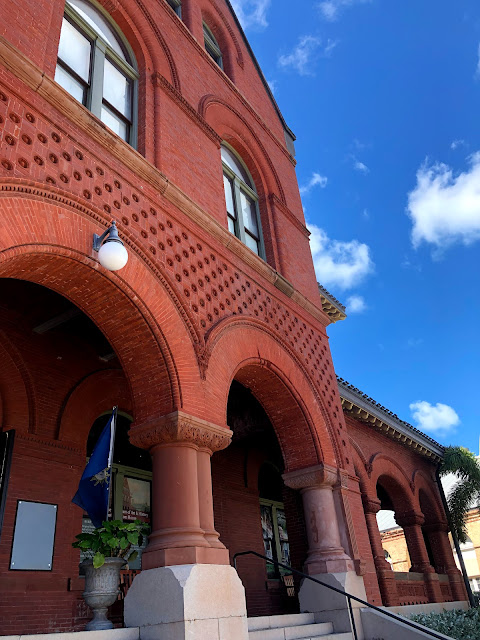 The Museum of Art and History, better known as the Custom House on Front Street is exhibiting the connection between the Keys and the Bahamas, which it turns out is extensive and intricate, rather a lot for just one room in the building. Consequently there are a lot of explanatory boards with many many words that I shall attempt to precis among these photos. 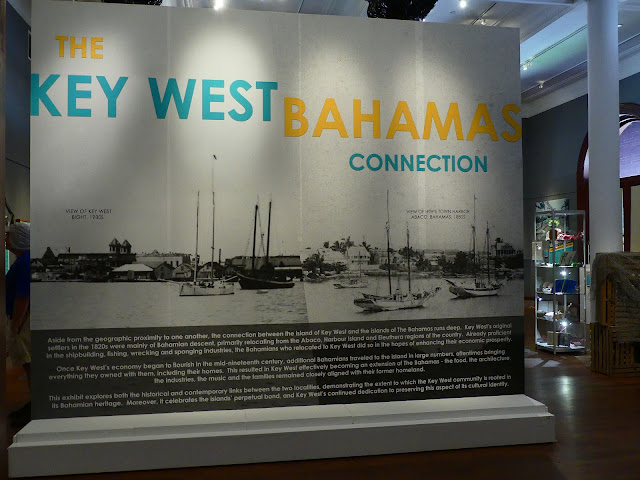 The Bahamas connection started with the Revolutionary War in the American colonies and when the revolutionary forces won, the Loyalists as they saw themselves, had their backs to the water. Britain rewarded their loyalty by offering them land nearby in the Bahamas, which were in 19th century as arid and under developed as they are today. If it is not already clear, this exhibit will make it clear for you that wealth was to be found in Key West, not in Nassau the capital of the Bahamas. 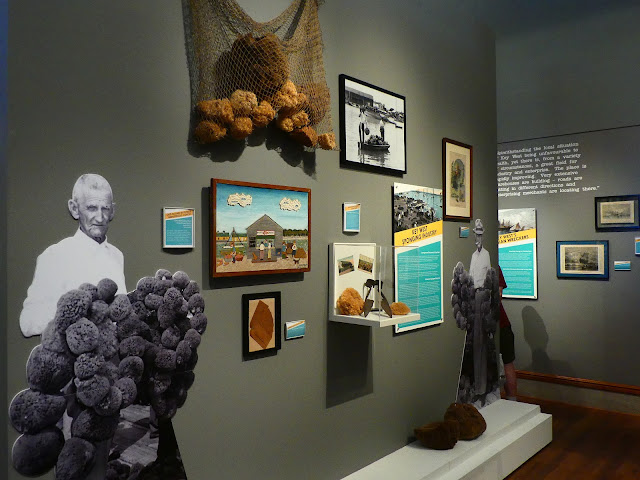 Thus it was inevitable that Bahamians started to trickle back to the US, after the bad feelings caused by the war started to subside. What makes this flow of human beings so interesting is that the bulk of the Keys were also underpopulated and, aside from Key West, during the 19th century most of these scrubby islands were as desolate agriculturally speaking as the Bahamas. So in a sense the flow of people in those days was less an invasion and more a mixing of populations. 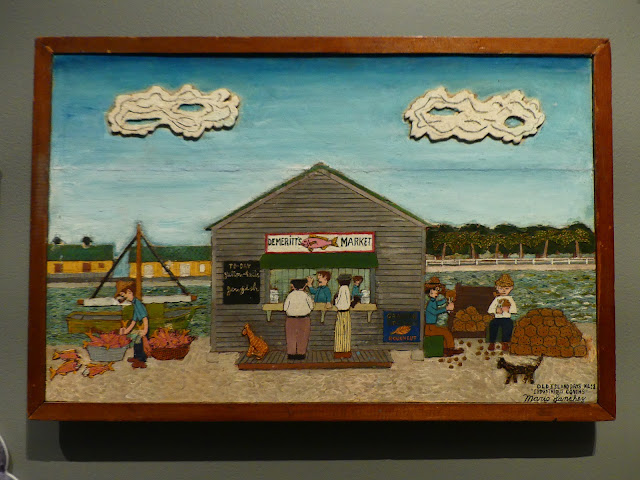 They came from the Northern Bahamas mostly, the Abacos where American plantation owners resettled. In 1834 the British Empire outlawed slavery which altered the population balance in the Bahamas and led to more free people competing for available resources in those islands. Thus the flow of white Bahamians back to the US increased, where slavery lasted another 25 years. And they brought their skills with them, as fishermen, spongers and boat builders. 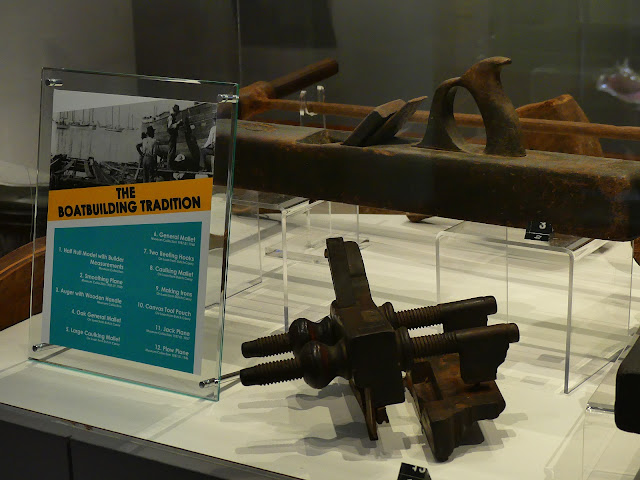 I have seen the famed Bahamian sloops racing in Georgetown in the Family Islands Regatta and they are the descendants of the island schooners that traded among the Bahamas, which islands are also known as the "Family Islands" to their residents. Once the sailboats were a lifeline, now they are  an historic sport. Shown below, atrading schooner: 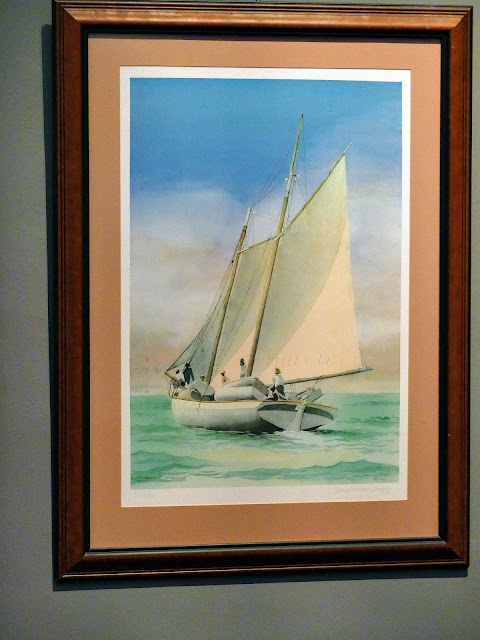 It turns out several names  familiar in Key West have their roots in the Family Islands. Nelson English Park for instance: 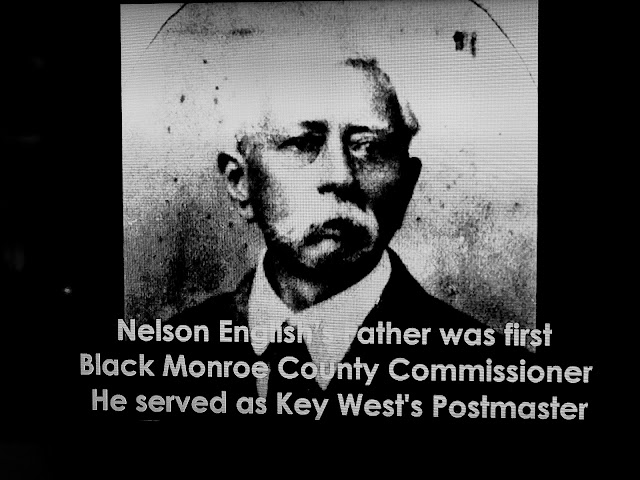 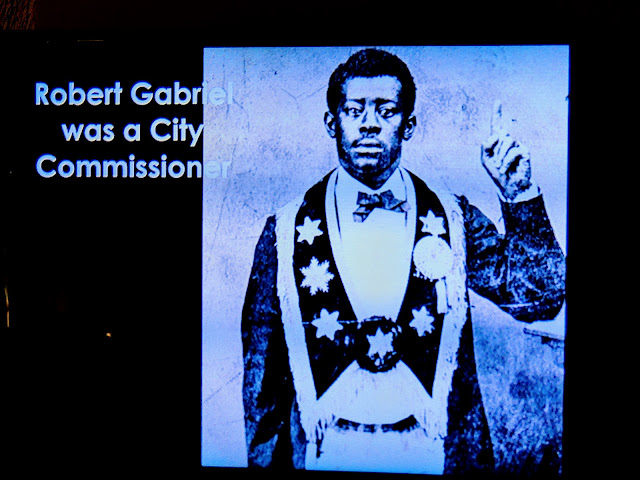 Sandie Cornish deserves a mention all his own in light of his desperate measures to escape slavery. He mutilated himself after he escaped to Key West and thus wrecked his economic value as a piece of property and his plan worked. He lived and prospered in Key West, a free man, and left money to assorted good causes. His principal monument is a vast white wooden church on Whitehead Street. I like to think he was also a fine story teller. 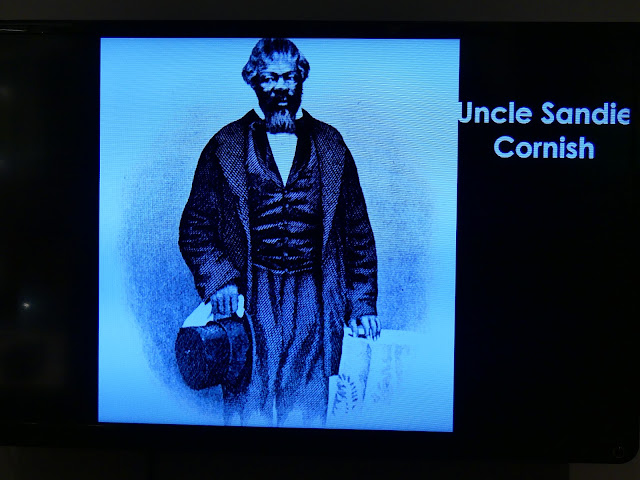 Sponging is one of those industries you don't think much about these days, in the era of synthetic everything.  I used to see the distinctive outline of a man near Sugarloaf Key standing on his boat poking the water with a hooked pole trying to harvest the sponges. I haven't seen anyone doing that for years now and I dare say it's outlawed or too much work or something. Once upon a time they imported sponge divers from Greece to harvest sponges near Tampa. 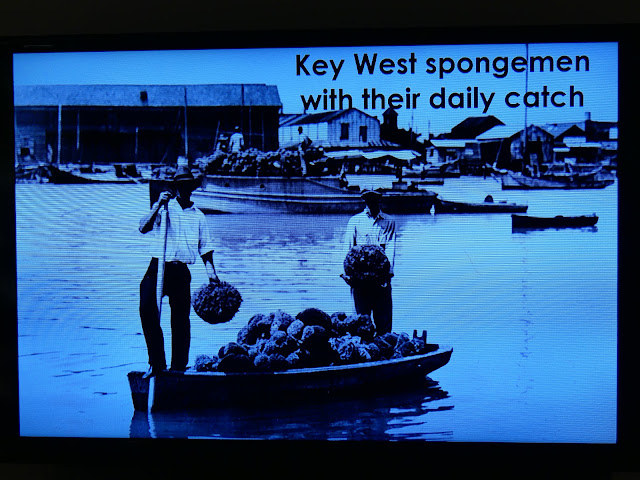 The other thing about the Bahamas is they are well known for their sandy banks. However the islands themselves are limestone outcrops just like the Florida Keys. Not at all like the sandy mainland of Florida. 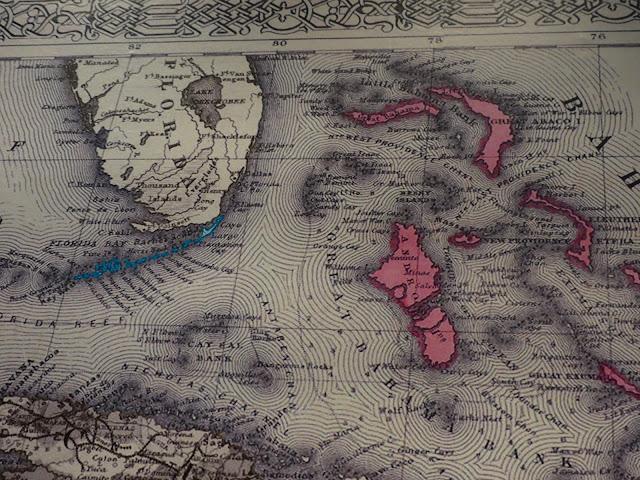 The other thing about the people who came here from there is that some of them, the ones with money I dare say, brought their homes with them. Such labor seems beyond imagining when you consider the complexity of our modern wired homes and lives. 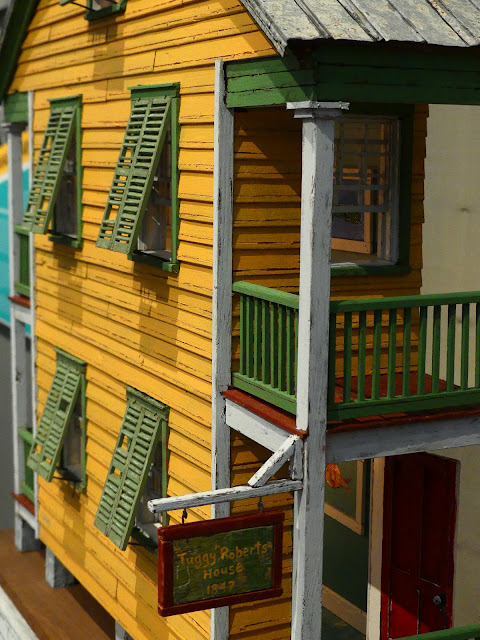 In those days homes were shells filled with furniture. Though they did bring distinctive Bahamian shutters with them. This model represents a house dismantled on Green Turtle Cay and brought by schooner to Key West for its owner Tuggy Roberts. 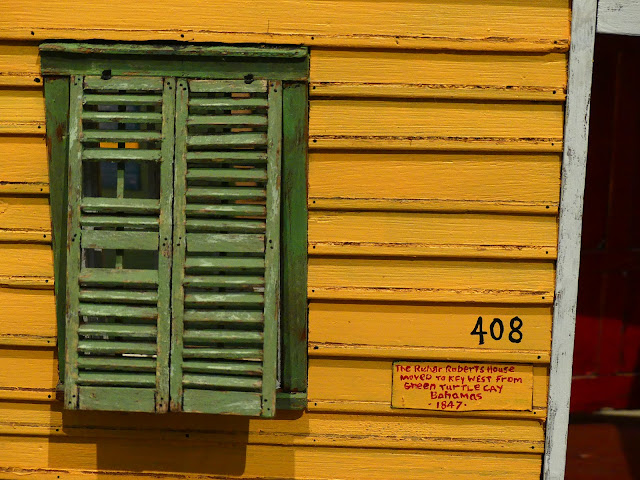 Apparently there was a massive storm in 1846 which wrecked much of the housing stock, which event slowed the migration from the Bahamas but impatient souls decided to bring their houses with them.

And even today if you walk around Old Town with your head in the air you will see homes with tin roofs and solid skylights like this model, propped up on pieces of wood. 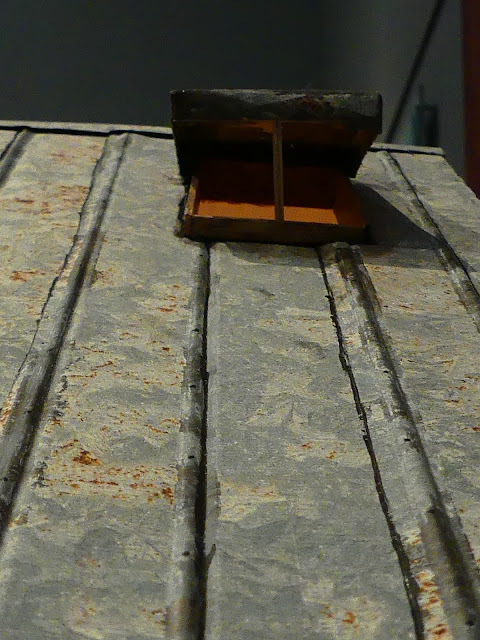 Then there is Junkanoo which is a form of carnival celebration in the Bahamas. It involves masks, costumes dancing in the streets and music created by using goatskin drums and castanets. 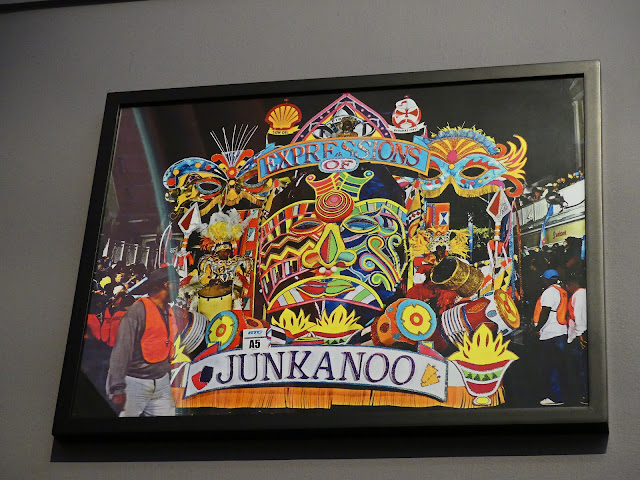 Junkanoo is of unknown origins but even though the Bahamas aren't strictly speaking in the Caribbean (even though lots of people think they are, like Bermuda) they have developed similar holiday traditions. 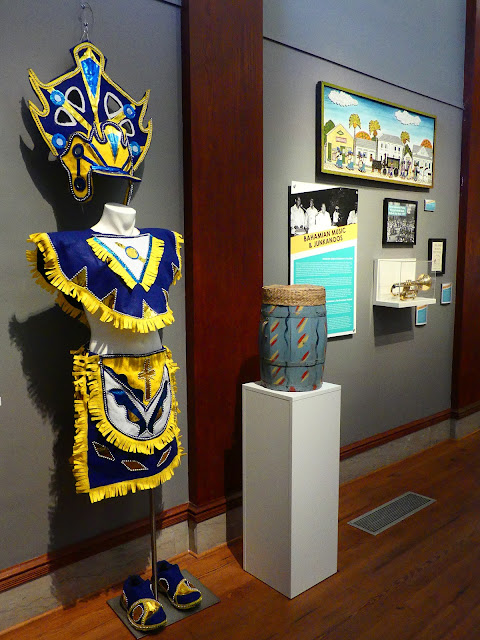 There was film of Junkanoo imported to Key West and  boy was I surprised to see Nancy hanging out with the players. She used to work with my wife and now I see her at the gym so I shall ask if she knows she is appearing on the wall of the Museum every few minutes... 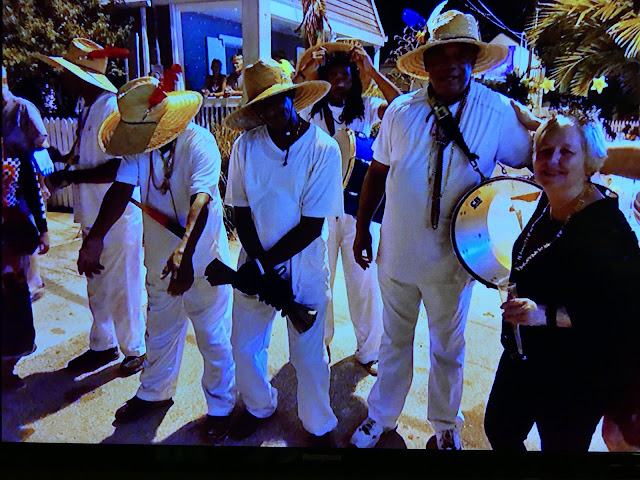 Worth a visit but I wish I had brought my rolling walker instead of my cane as there was lots to read and my legs were killing me by the end. 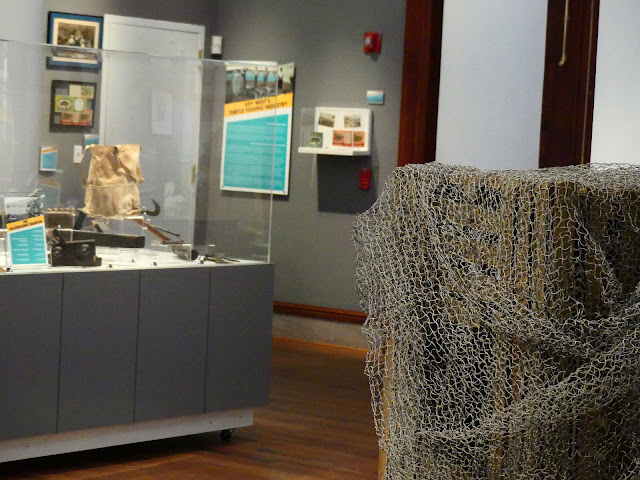 Through April 7th, from the Museum's page:
Aside from the geographic proximity to one another, the islands of the Bahamas and the island of Key West have much in common.  The latter’s original settlers were mainly of Bahamian descent, particularly from the Abacos, Harbour Island and Eleuthera.  The Bahamians, already proficient in the shipbuilding, fishing, wrecking and sponging industries relocated to Key West in the hopes of enhanced economic fortunes.  Once it was established that Key West could be prosperous, Bahamians moved to the island in large numbers, sometimes even bringing everything, including their homes, with them.  The result was that Key West effectively became an extension of the Bahamas; the food, the architecture, the industries, the music and the families all were closely aligned with their former lives.
This exhibit seeks to explore both the historical and contemporary connections between the two locations, demonstrating how much of Key West’s culture and community is deeply rooted in its Bahamian heritage. 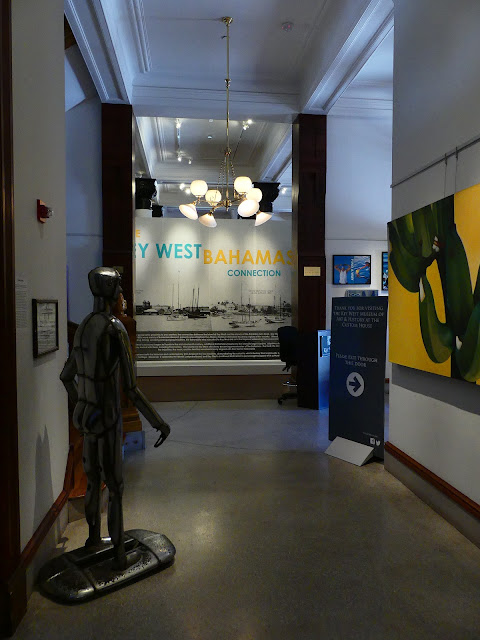