Rusty negotiated downtown Key West like a pro. He did get scared by some loud music and motorcycles and drunk spring breakers around Simonton Beach but otherwise he walked and sniffed and checked stuff out with perfect equanimity. I was pleased by and surprised with his performance. We ambled around together like we had been doing it all our lives, old friends. It was very pleasant. 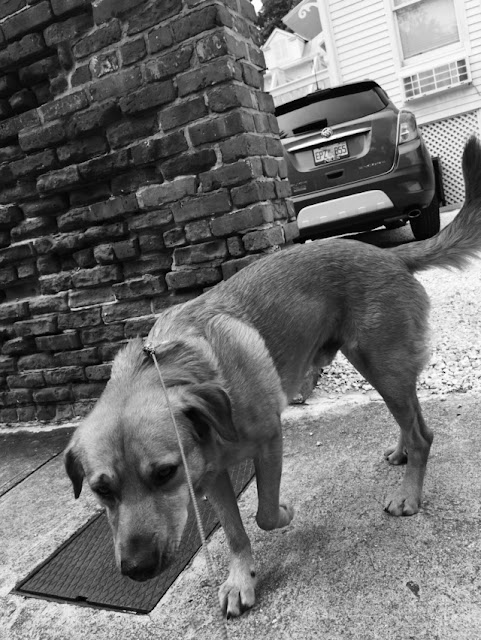 I never much cared for the name Pelican Poope which struck me as rather...scatological, but when news came that the operation was closing down and souvenirs and dust catchers would no longer be sold people were distraught. And now there is no sign it was ever here. Just like that. 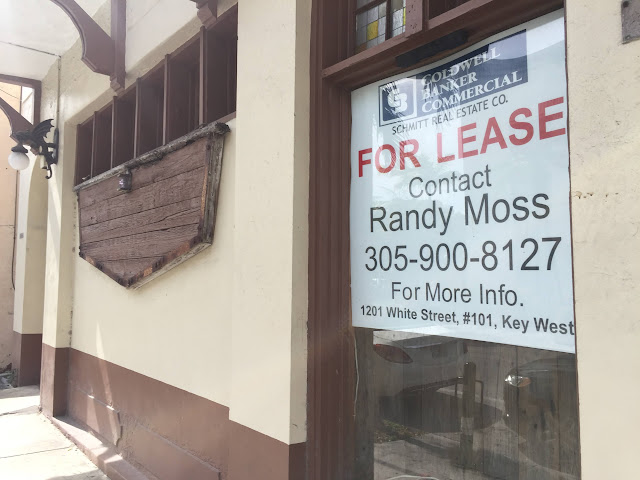 Then we have the new arrivals in town and by the name alone it didn't sound promising. One more puerile franchise to lower the tone on Duval. 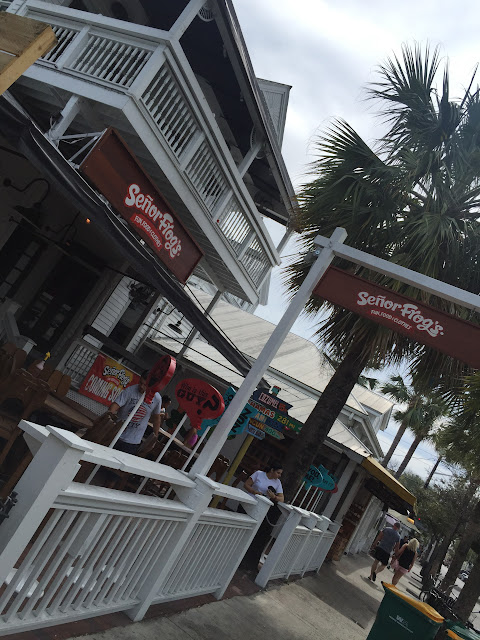 And God knows what this monkey thing is going to be but I doubt it will change the path that Duval Street seems set upon. 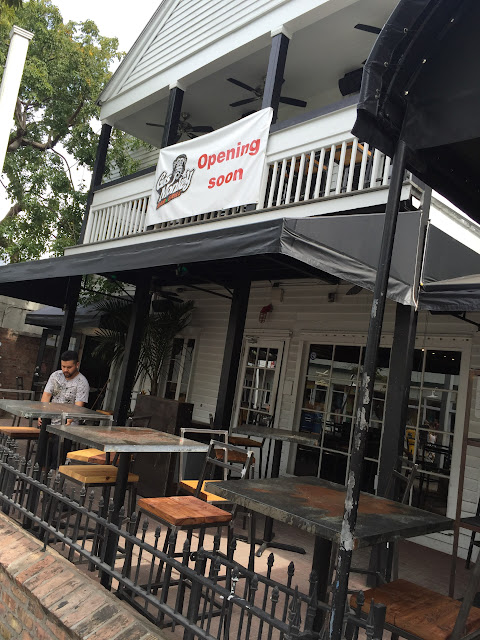 World of Beer is gone but there are signs in the window seeking staff. For what precisely is not clear. I saw mention of tacos but who knows. Who cares. One more chain outlet no doubt. 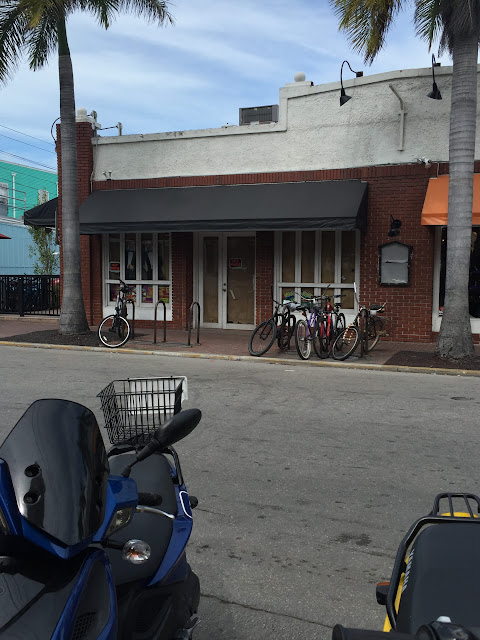 Rusty was wandering outside Old City Hall seeking unconsidered trifles, channeling Cheyenne it seemed to me, and I was forced to ponder how this building would get funded these days. 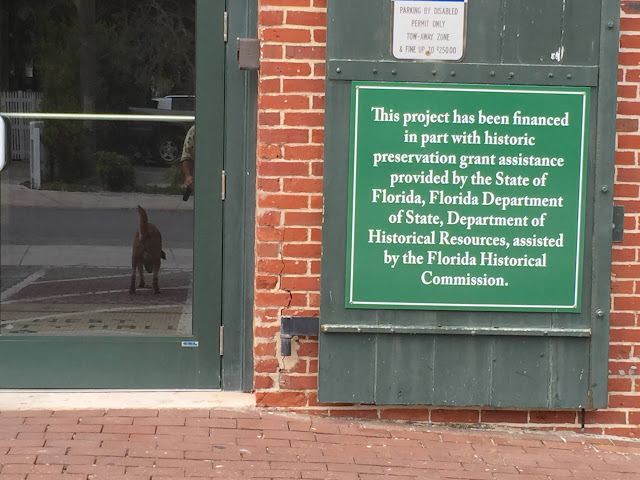 Just because you see someone defying a painted sign doesn't mean you should too. If you don't know the owner of the driveway you may not want to do this: 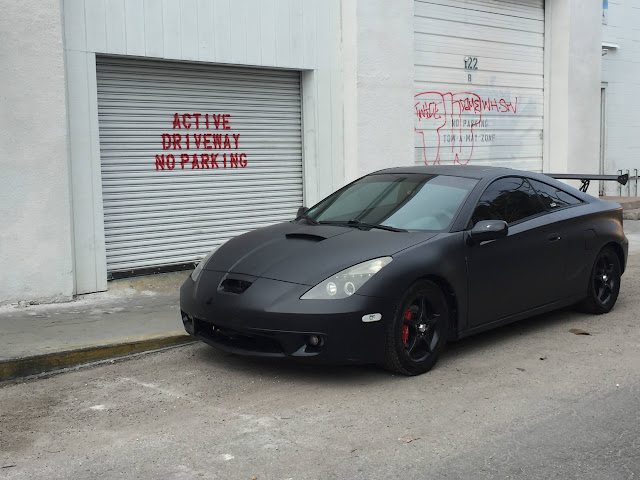 I was struck by all the tables lined up along the sidewalk. They looked like a painting or some sort of artwork of a moment captured in a moment in time. They were probably just spring breakers having hangover breakfasts. 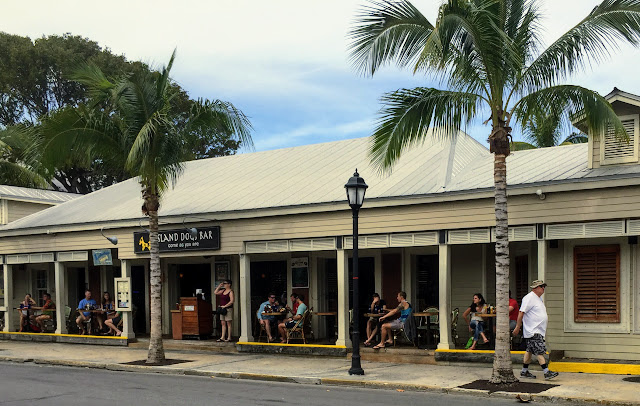 What made the walk more awkward for me who likes his anonymity, was my face on the newspaper machines. 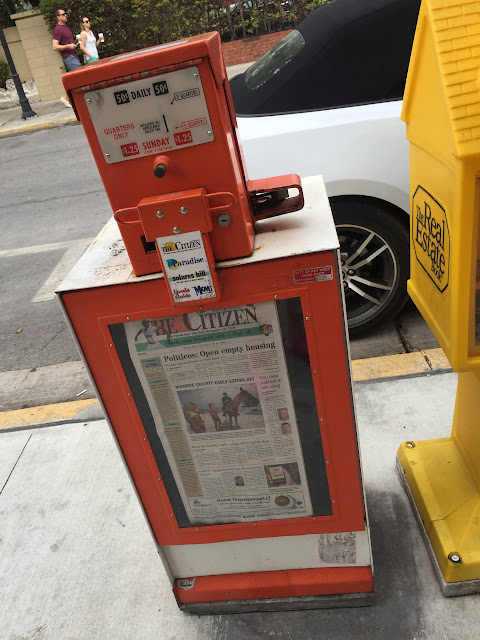 But there again Key West was looking good under slightly blue skies and Rusty was doing well. 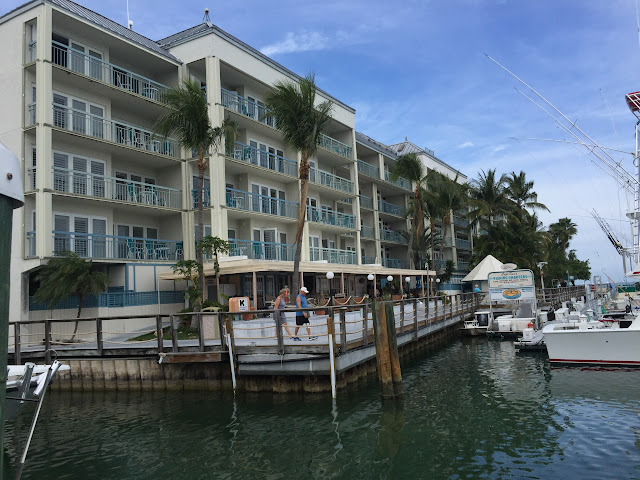 According to a highly statistical piece on the weather channel website Spring is supposed to show up with daytime temperatures in the seventies pretty soon Up North. I am sure that will meet some measure of approval but in Key West the tedium of endless summer grinds on. 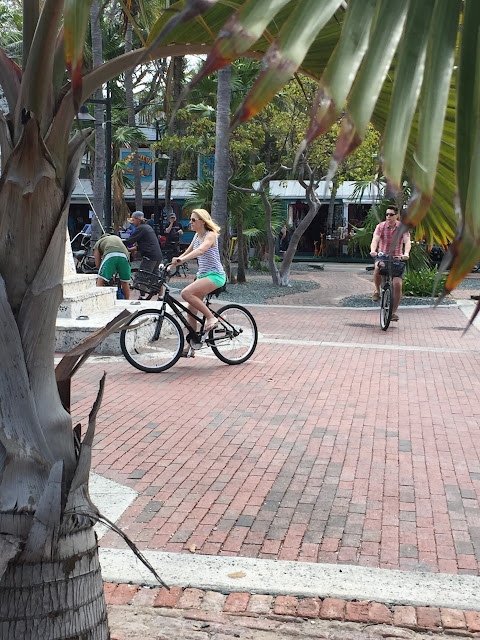 Not everyone has gentrified to conform to prevailing practices. 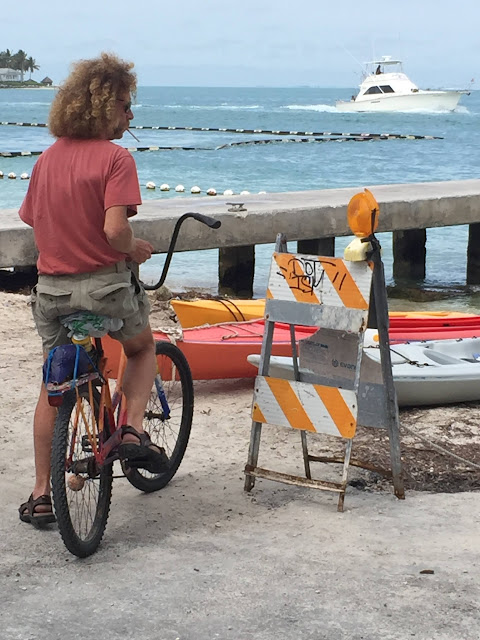 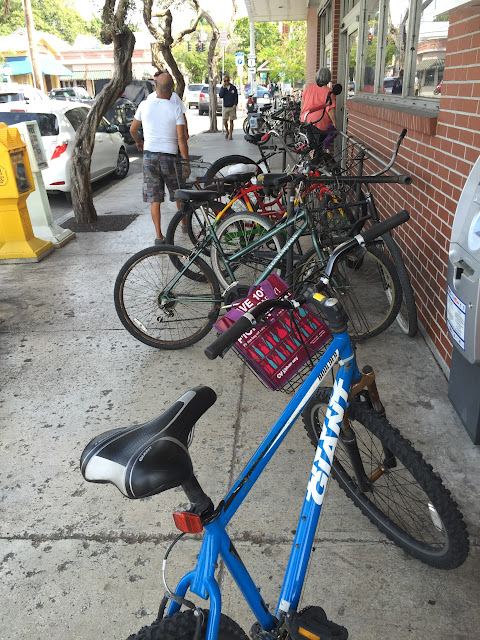 Cycling:
How I snagged this picture I'm not sure, blind luck I suppose, but from my car it illustrates the madness of some people who ride bicycles in and around this town. As you can see there is plenty of room for bikes and pedestrians on the sidewalk along North Roosevelt Boulevard. However because this is Highway One and thus a state highway the cretins at the Department of Transportation have designated the number two lane as permissible for bicycles.  My mother used to tell me that just because you may do something doesn't mean you should do it. A lesson lost on this potential suicide rider. 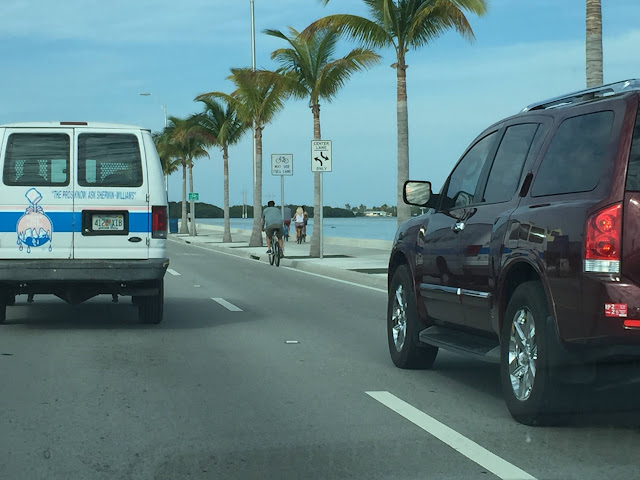 The thing is a lot of anger is expressed about cyclists by people who drive cars and get held up and slowed down by people pedaling. However it's just venting but for people on two wheels getting out of the traffic flow is best as distracted drivers are the real danger. I see it all the time on my two wheels and why a cyclist who could ride legally out of the traffic doesn't beats me.But there again not all bicycles have actual tread on their tires: 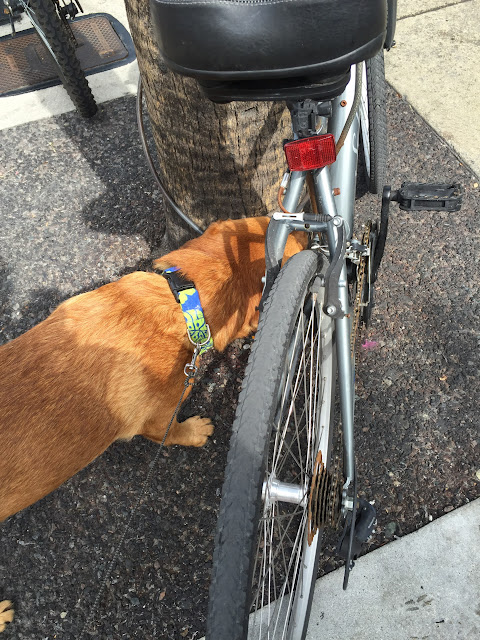 As inspected by Rusty the Wonder Dog. Below we see in broad generalization the two species of cyclist seen around town, the natty snowbird riding home from some refreshing tennis to occupy an otherwise empty morning while pedaling head on down Windsor Lane we see a year round resident on a cheap cruiser clutching a cup of coffee and looking less than natty. 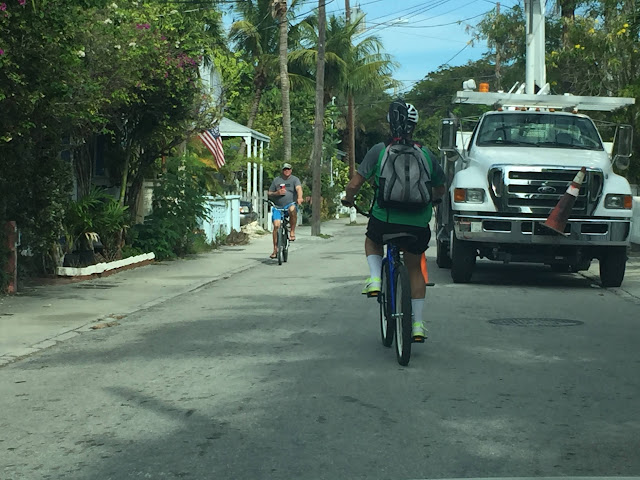 The truck turned right with no turn signal showing. The cyclists survived but like I say you have to treat everyone on the road as though they are out to kill you. Passive safety has become the dominant feature of modern cars such that you might be forgiven for blaming drivers for basically not giving a toss about safety. If they wreck seat belts airbags and crumple zones will save them. Cyclists and motorcyclists who come from experiences driving cars try to replicate the same approach to protecting themselves. 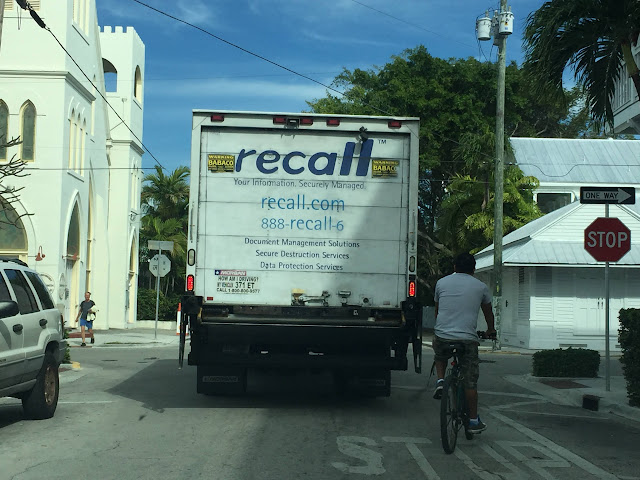 There is the illusion that being visible makes you safe so people dutifully dress up in bright clothes. However bright colors won't save you if a driver has their attention glued to a phone or is day dreaming behind the wheel. I dress in black as it hides the dirt, but I have no illusions about being seen. I make sure I see them. Whoever they are. 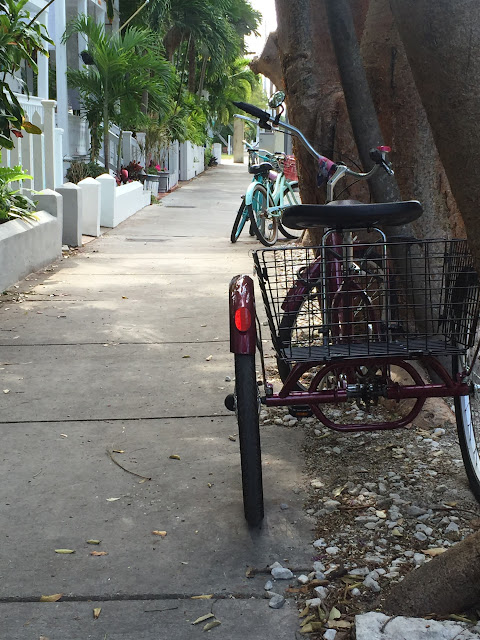 Key West should by rights be a delightful place to ride, flat streets mostly, lots of shade, lots to look at with varied architecture and bright colors natural and human made...but for me I take more pleasure in walking. Bicycling takes up a huge amount of my attention as the streets are narrow and there is no sense of cycle culture pervading the city. 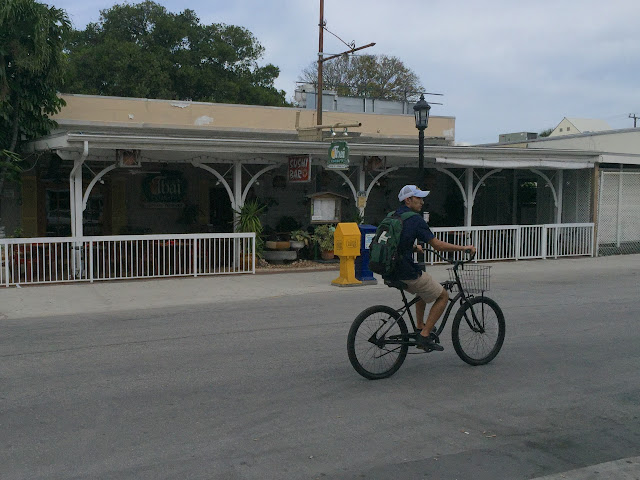 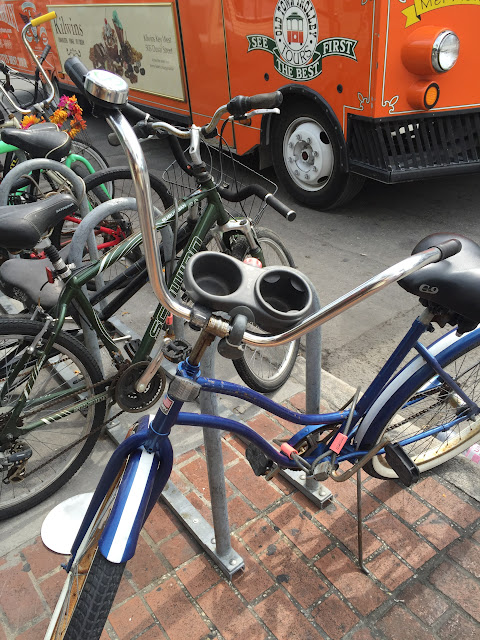 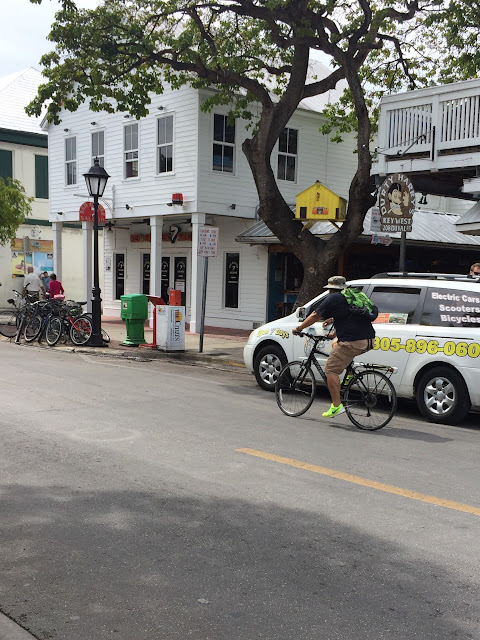 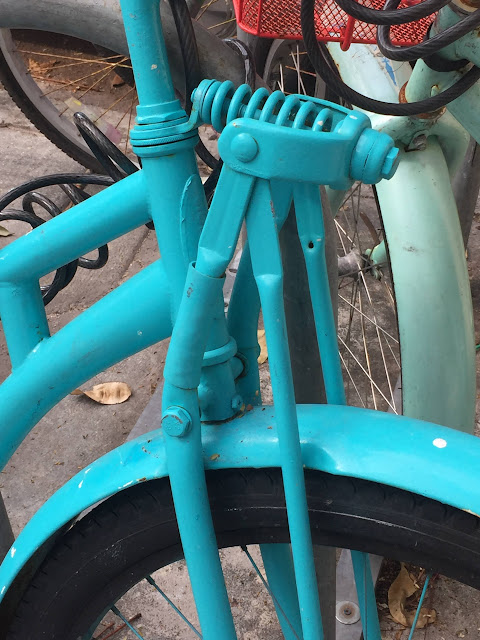 Bike paths are the exception, not the rule and two way traffic almost everywhere means you have to keep an eye out for traffic from all directions. 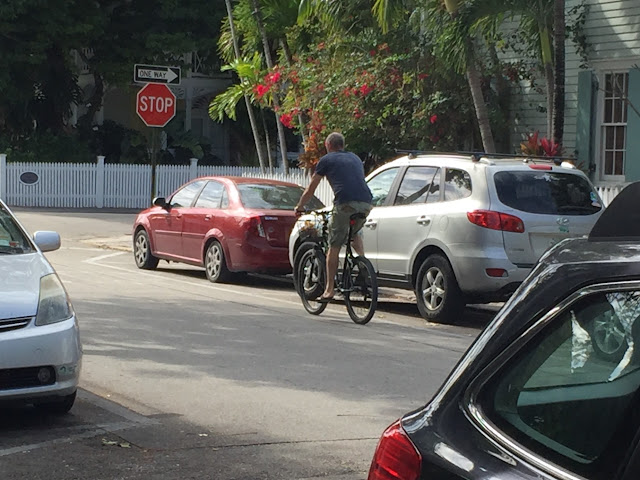 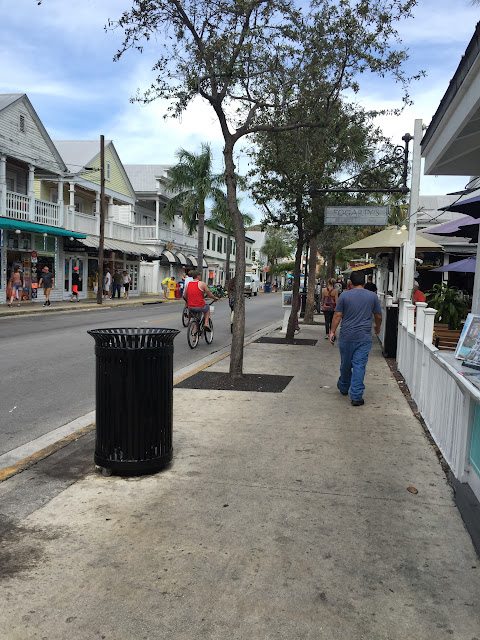 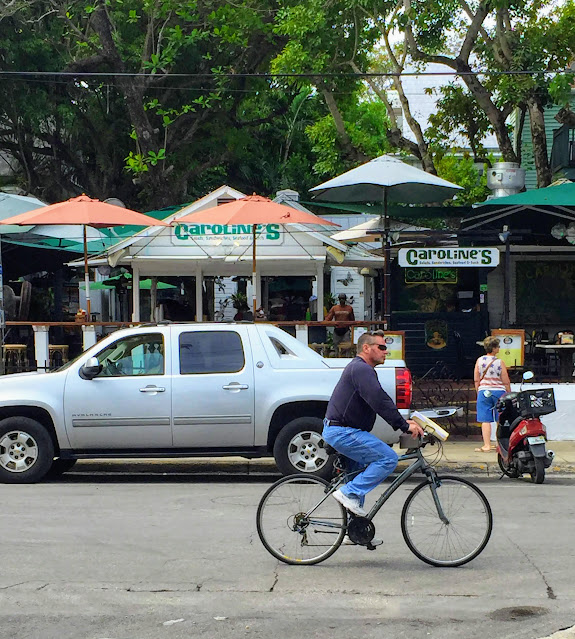 Bicycles may be utilitarian in this city, and a sensible way to get around on an eight square mile island with an ideal climate year round, if you can stand the summer heat, But they can also be a means of self expression: 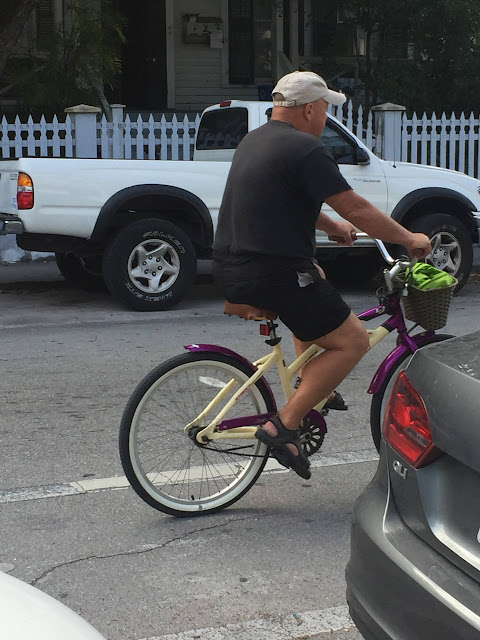 And then there are motorcycles. But that's for another essay. This row of bikes all neatly covered up caught my eye: 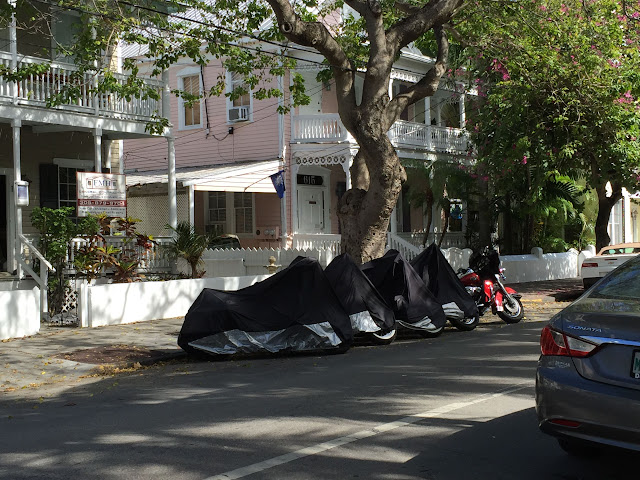 Rentals for a ride down the famed Overseas Highway I dare say.
Posted by Conchscooter at 12:00 AM 2 comments: