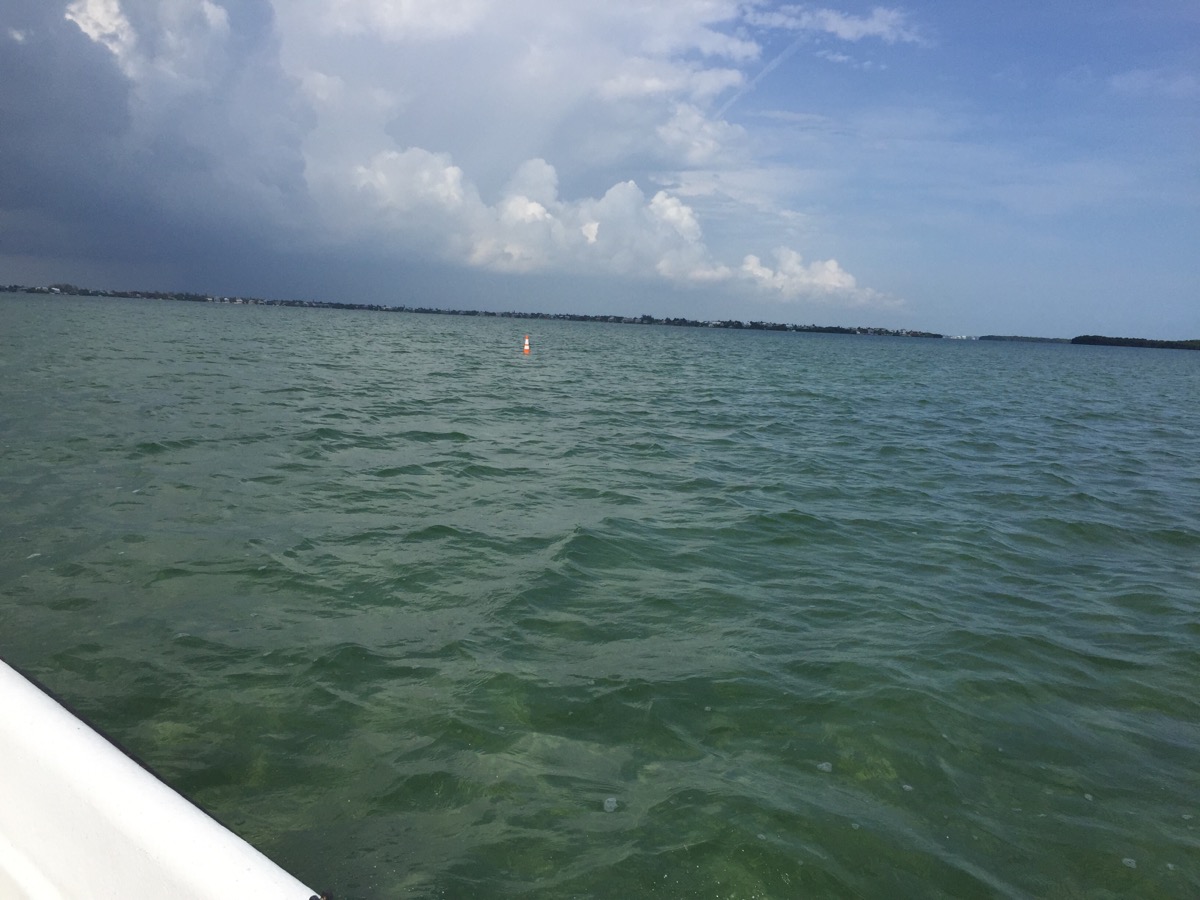 Robert came by which is always a pleasure and brought his super duper fuel filter to check my boat's fuel tank after a winter of idleness and I was delighted to see clean fuel. I had run the boat a couple of times during the cold months and I was equally happy to get a nice crisp start from the battery and even though the idle was a little low the boat ran perfectly on our test run across Cudjoe Bay. 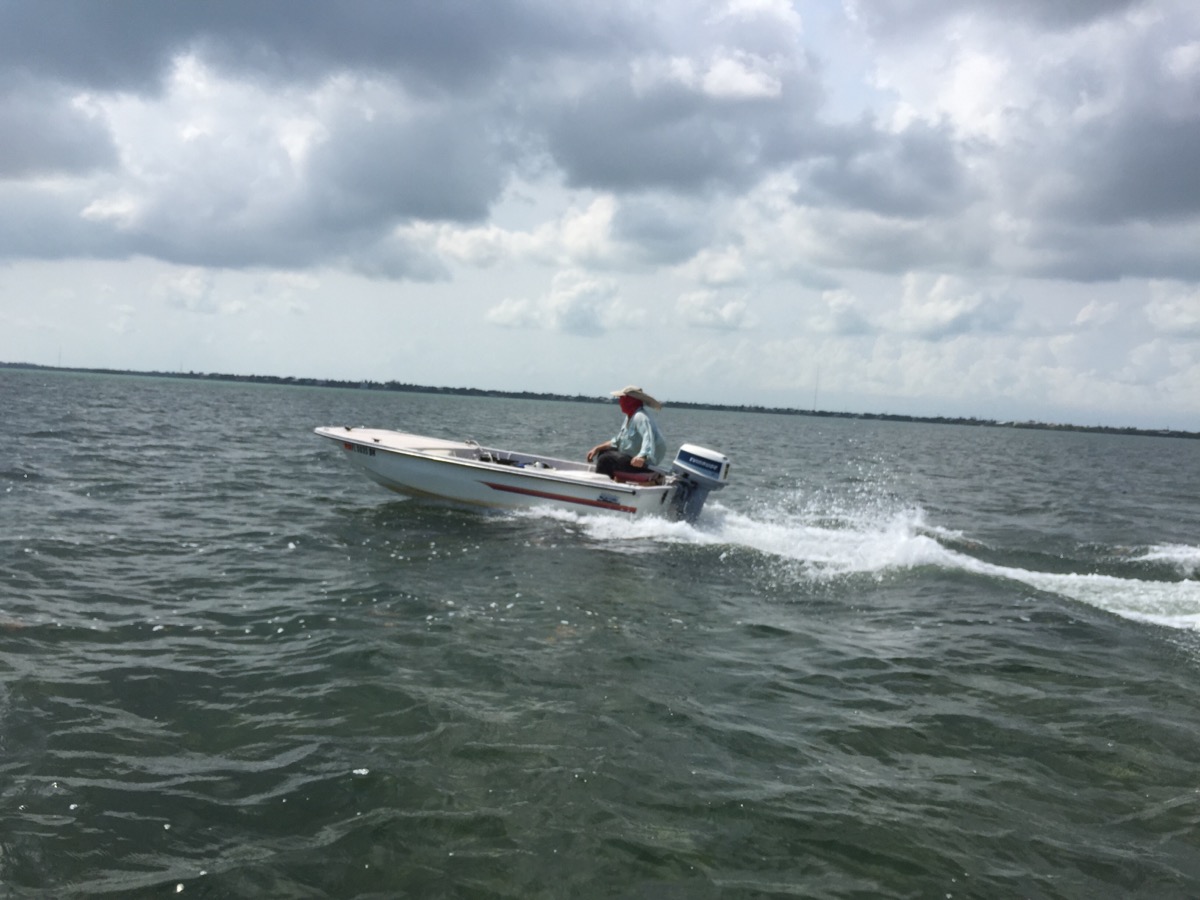 To me the essence of life in the Keys is represented by these kinds of summer afternoons. I don't care to fish but I do enjoy swimming and the clear waters make that a delight. A lot of times visitors enamored of Old Town Key West wonder at the desire to live in the suburbs, but having a canal behind your house and a boat sitting there ready to take off on the water...why, to me that's living. 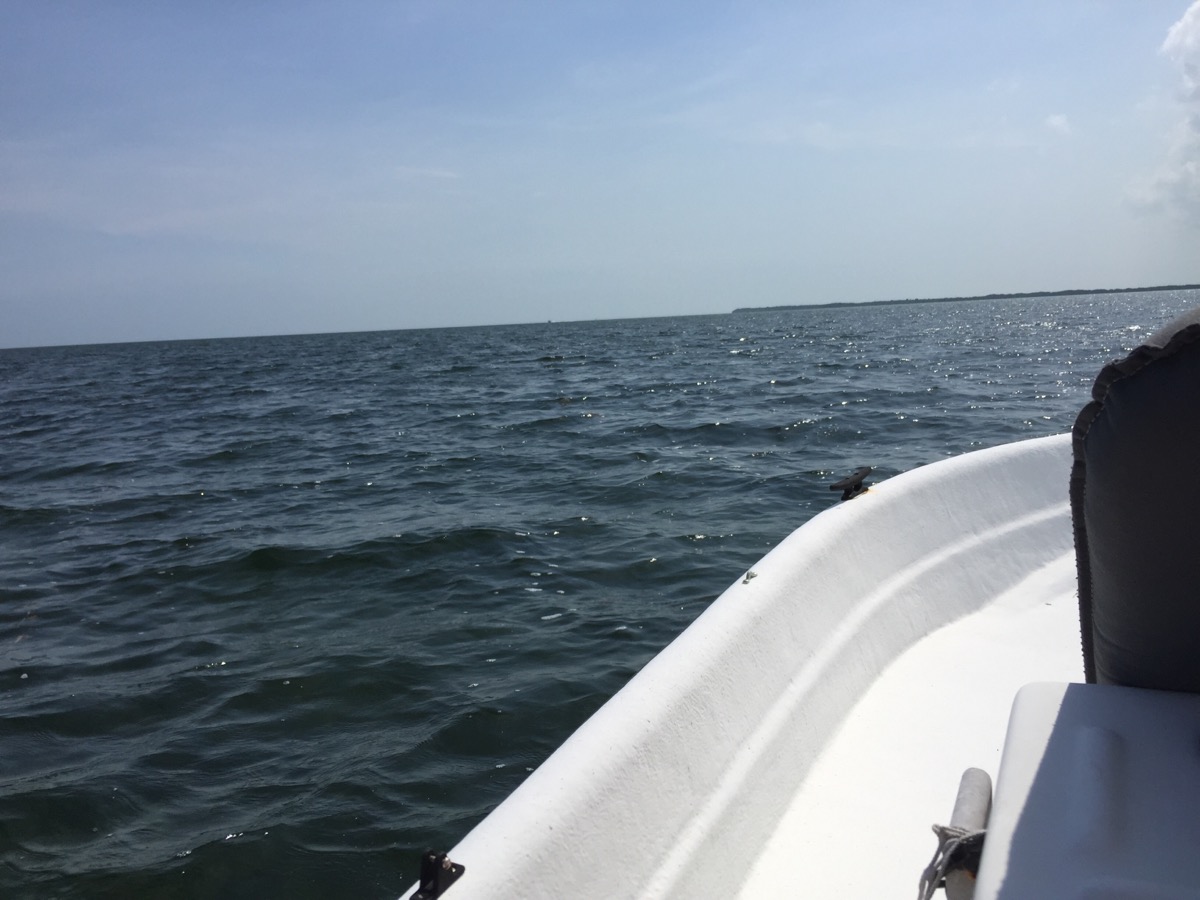 We zipped across Cudjoe Bay, an unnaturally shallow body of water dotted with small clumps of Sargasso weed. My 25hp Yamaha has a tremendous affinity for the stuff, yellow cauliflower heads of beady weed dotted on the water's surface. I tried to dodge them which is much easier when the weed is massed into clusters the size of table cloths but the little lumps are just as effective at killing the propeller's ability to bite the water. Every now and again a sudden increase in rpm with a corresponding decrease in forward motion required I come off the plane and back up a second to clear the offending weeds. 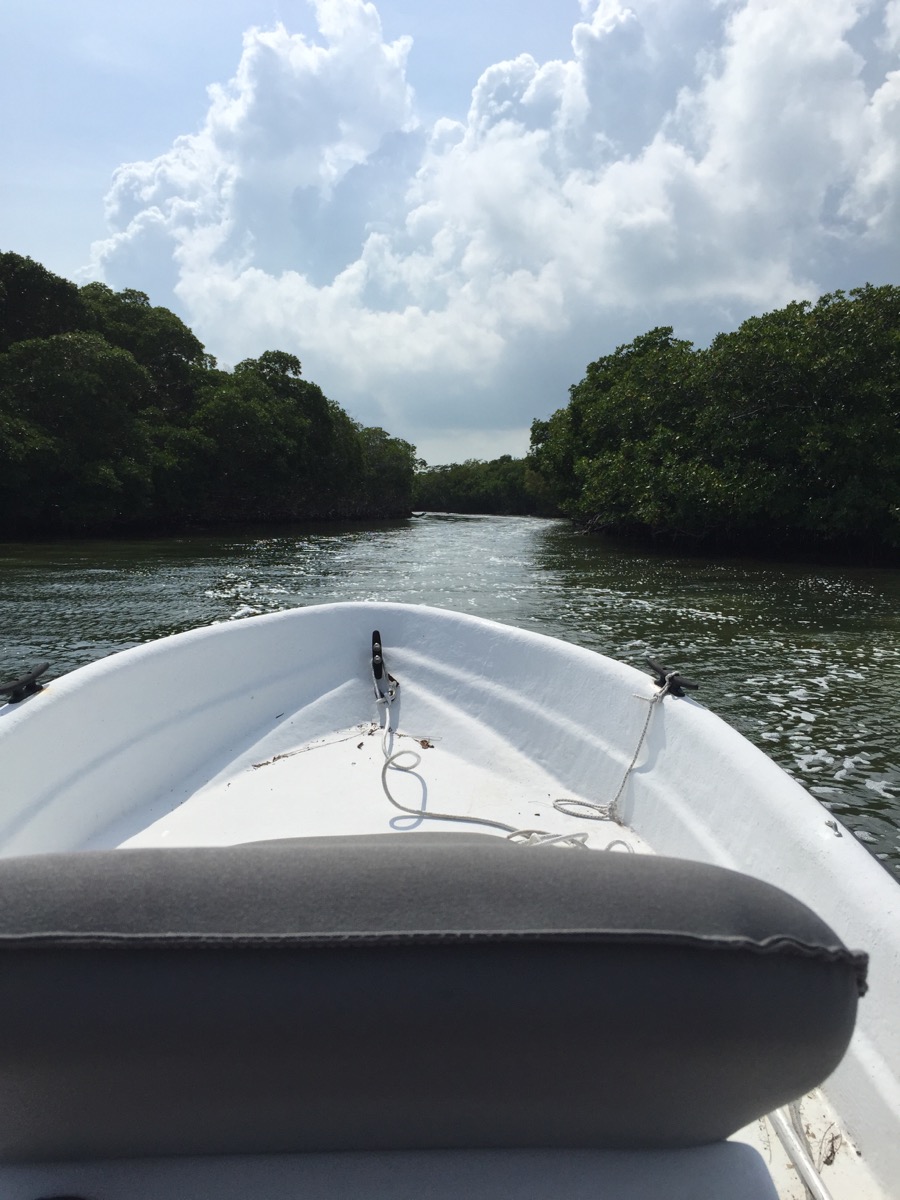 We reached the creek in due course, the entrance clearly marked and rapidly opening onto a broad straight canal cutting across Sugarloaf Key. 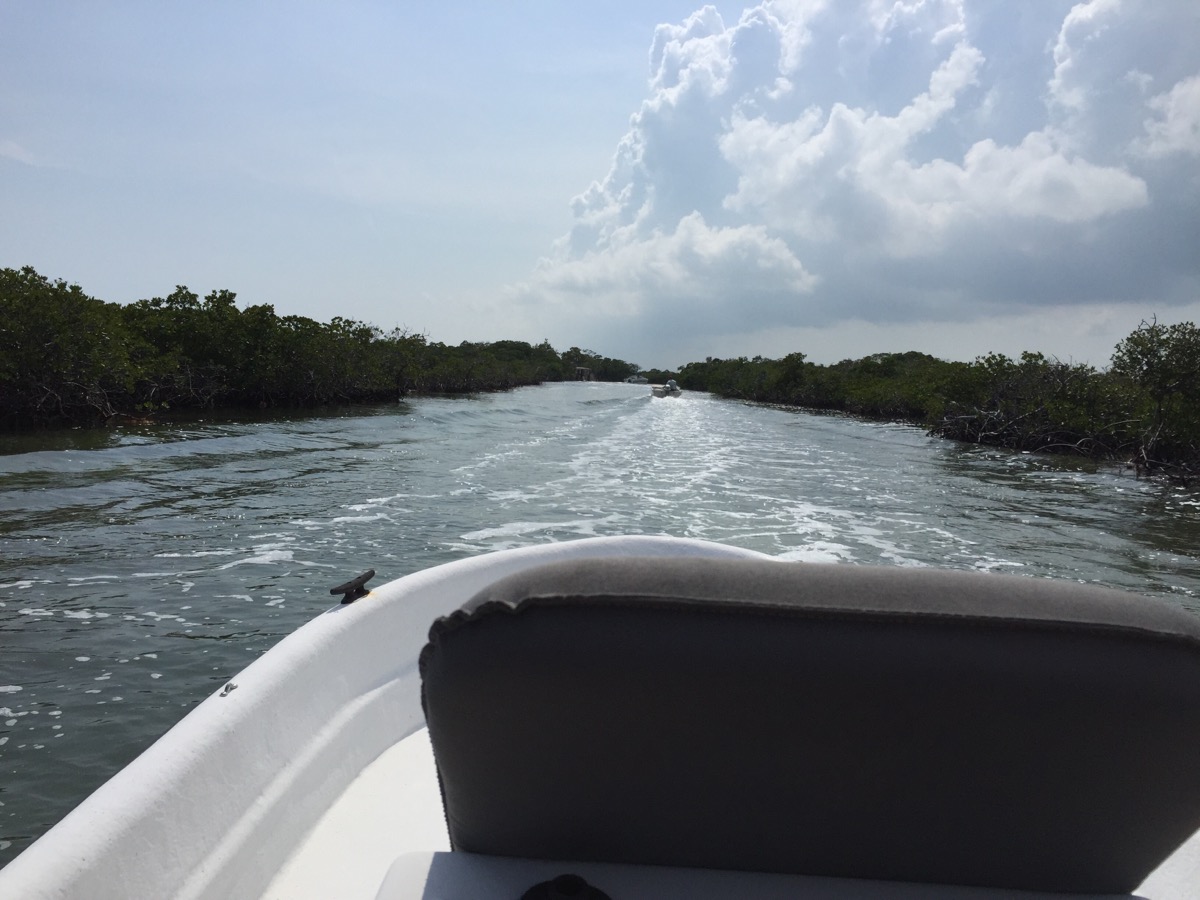 The old Highway 939 bridge has long since disappeared but the stumps that used to hold the roadway up are still there and mark the turn into Tarpon Creek. 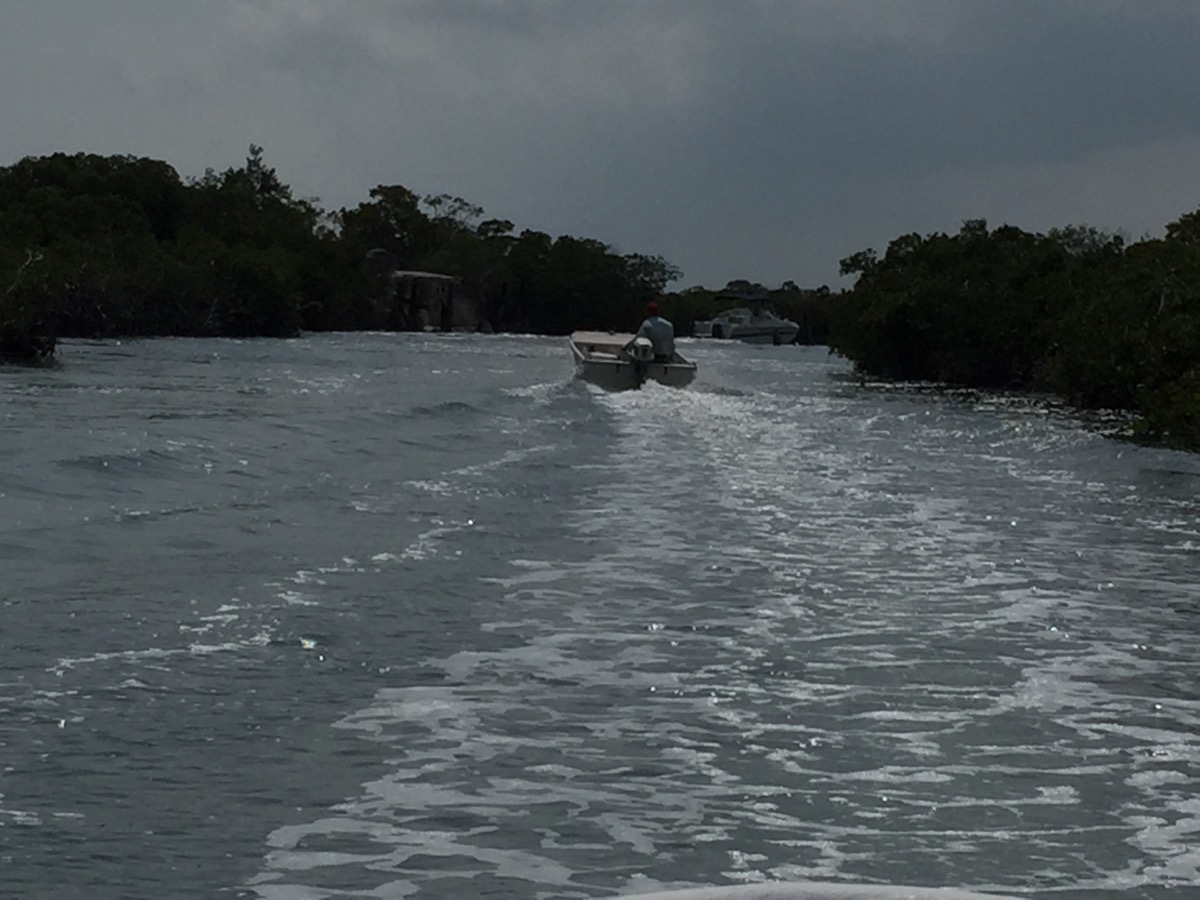 Robert led the way through the mangroves. 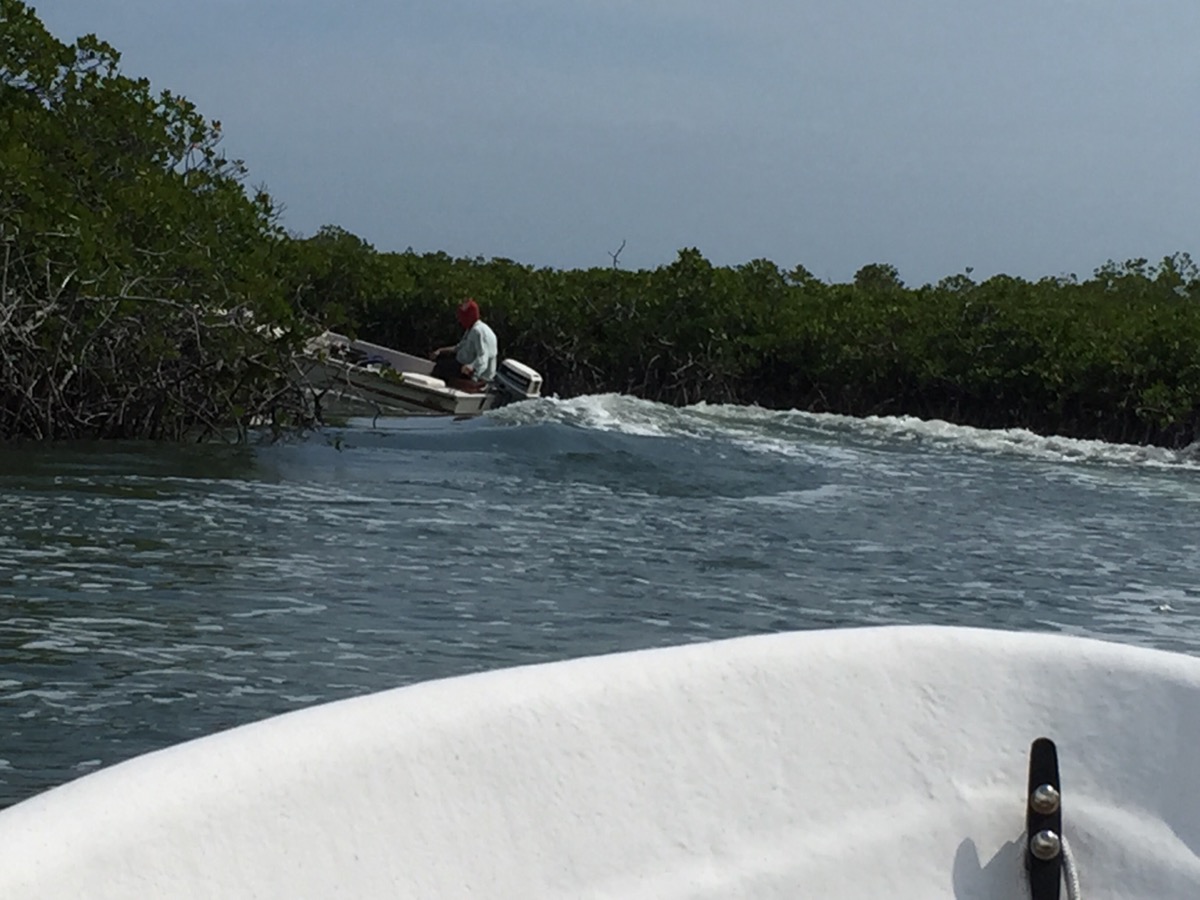 I spotted a piece of trash floating and stopped to pick it up which let the current take my boat into the mangrove roots which tangled the prop which held me up a bit as I struggled to get the prop out of the mud...I got the trash though! 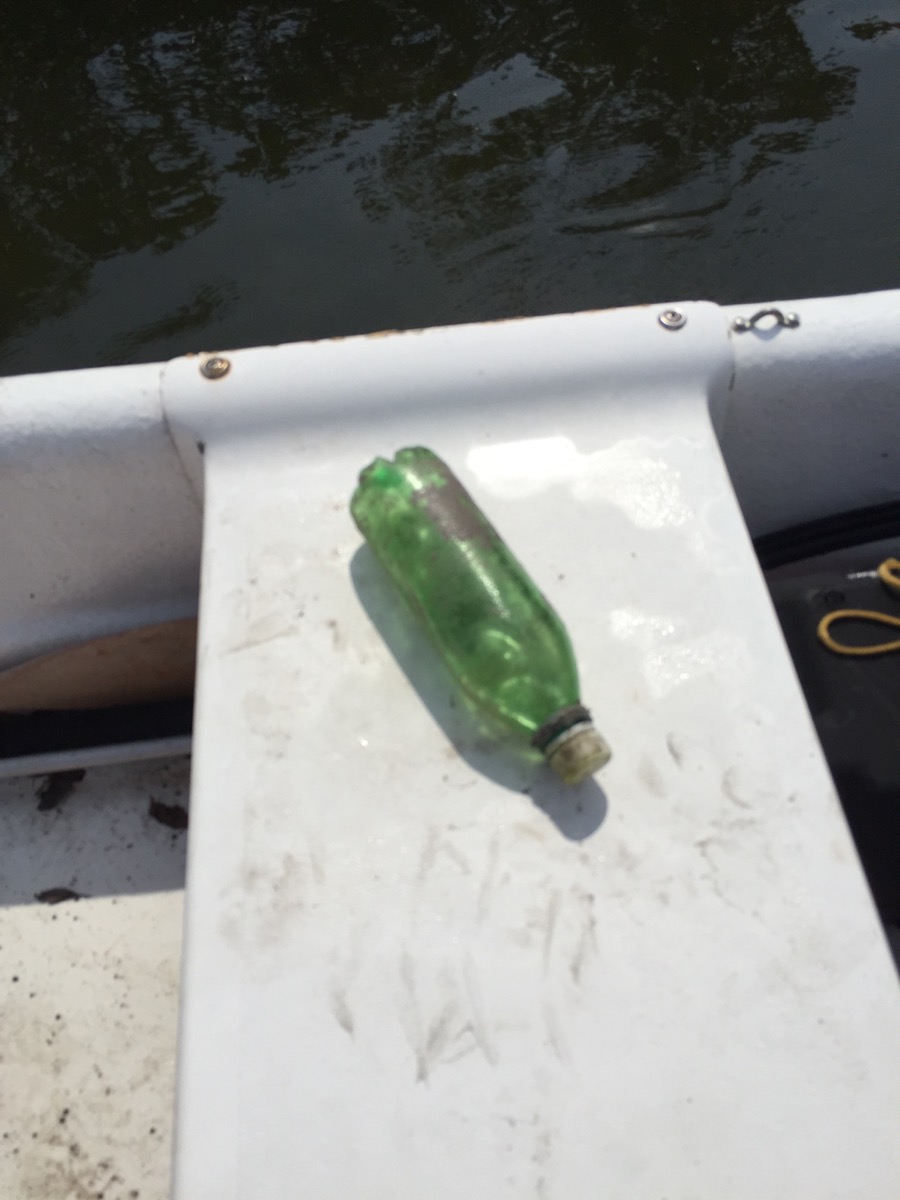 This scenario at the end of the creek reminded me a bit of Bloodline the Netflix show set in Key Largo. They shot a scene in the mangroves at night in the rain and you've got to give them credit because they didn't fake any of it. I'm looking forward to season two. 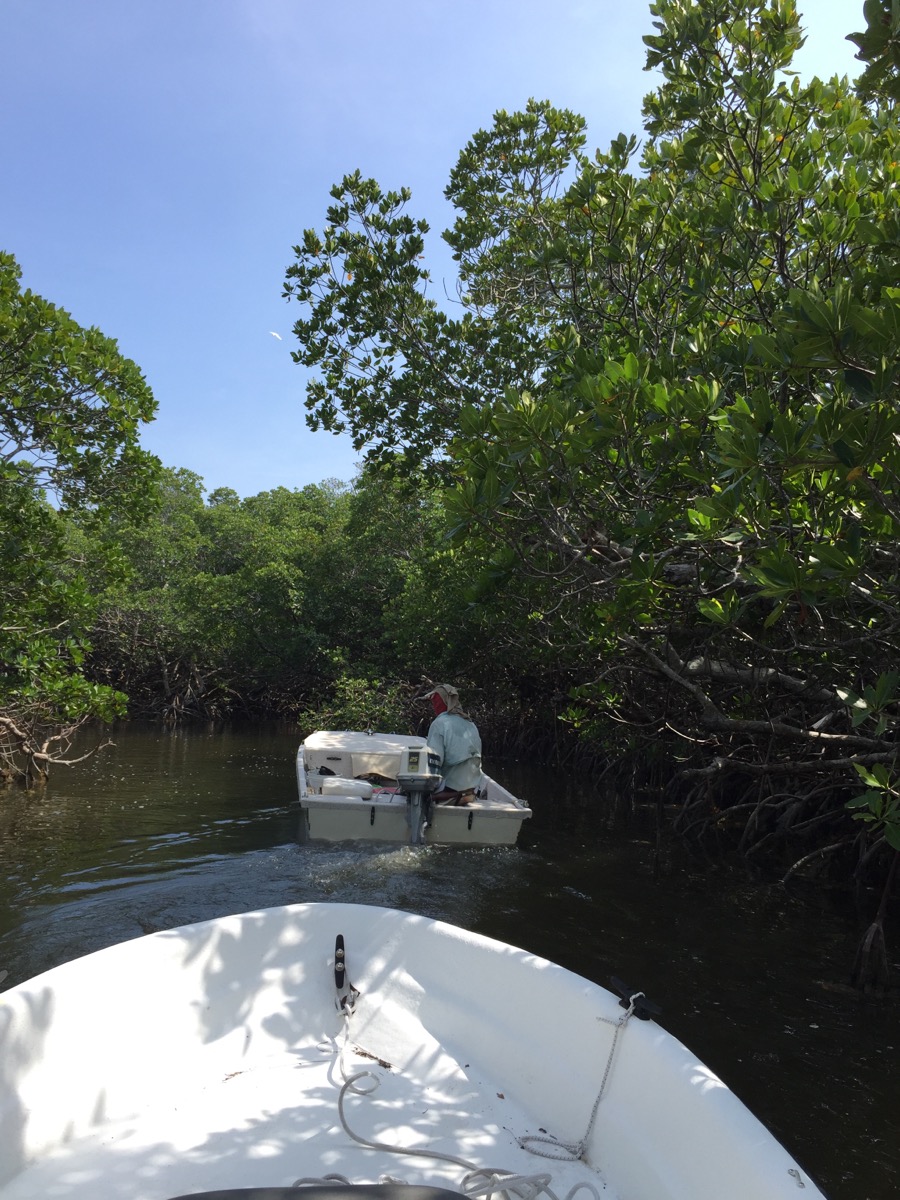 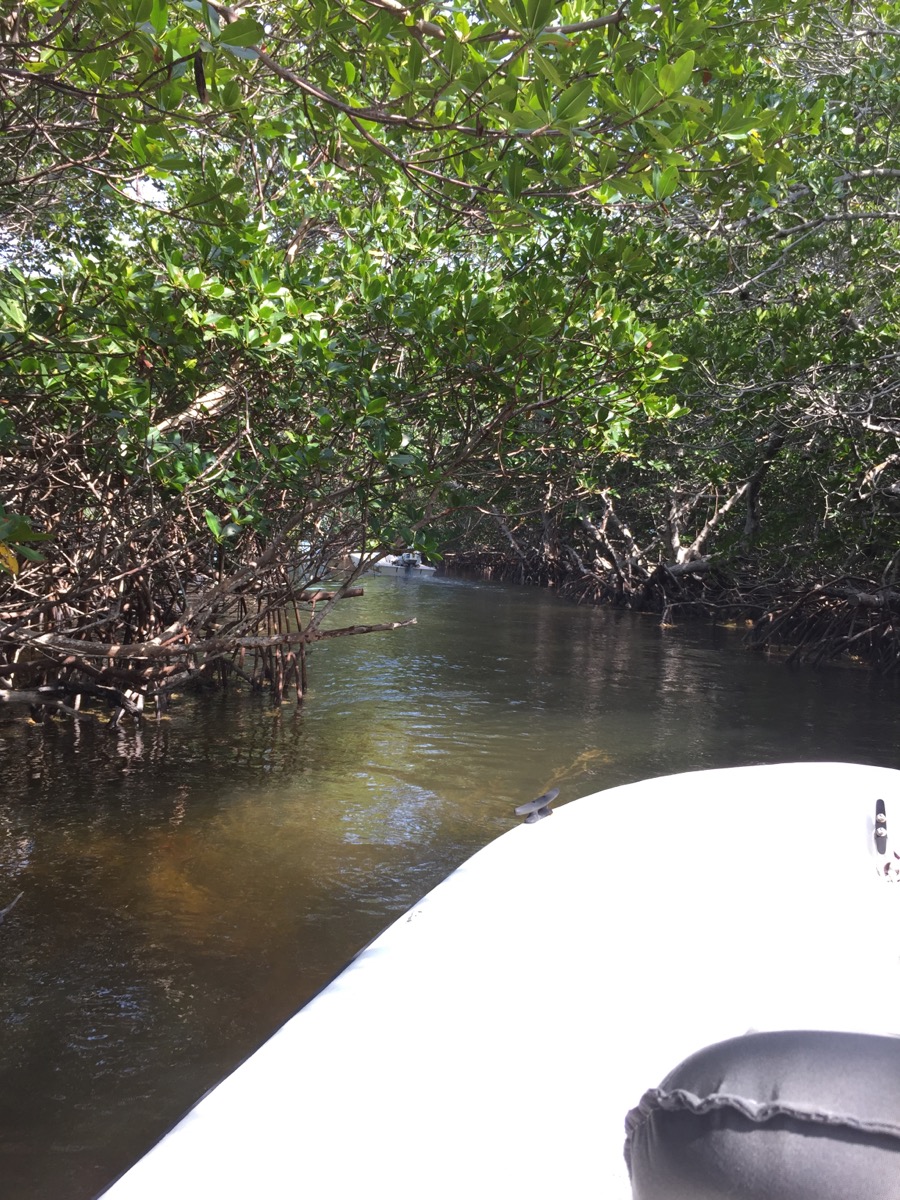 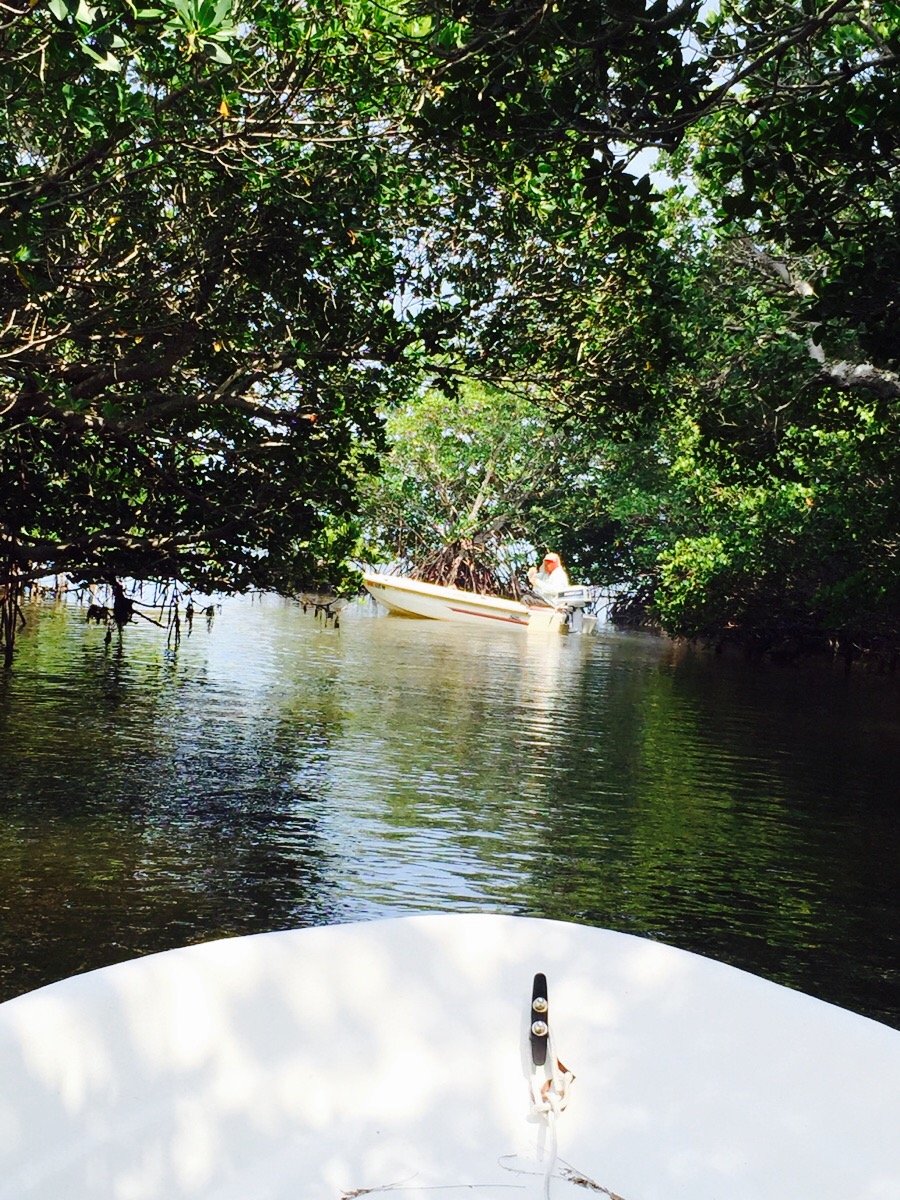 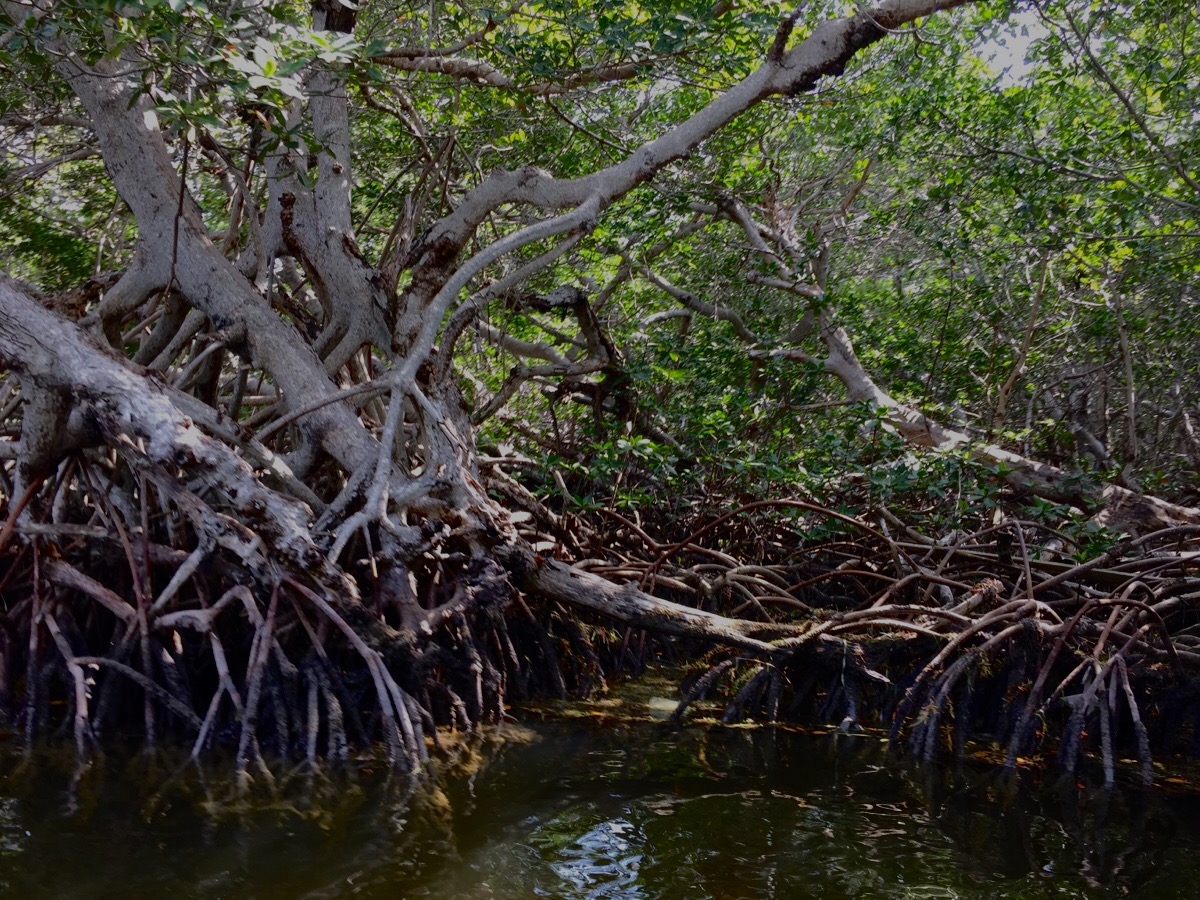 I used to lead kayak tours through mangroves much like this in a former life. It looks creepier than it actually is. The mangroves are essential as fish nurseries, safe shady places for small fish to grow to maturity. The red mangroves grow in the salt water so there is no dry land among them which gives the place a rather eerie feel. However if you know the channel you are paddling down doesn't dead end there's not much to worry about. 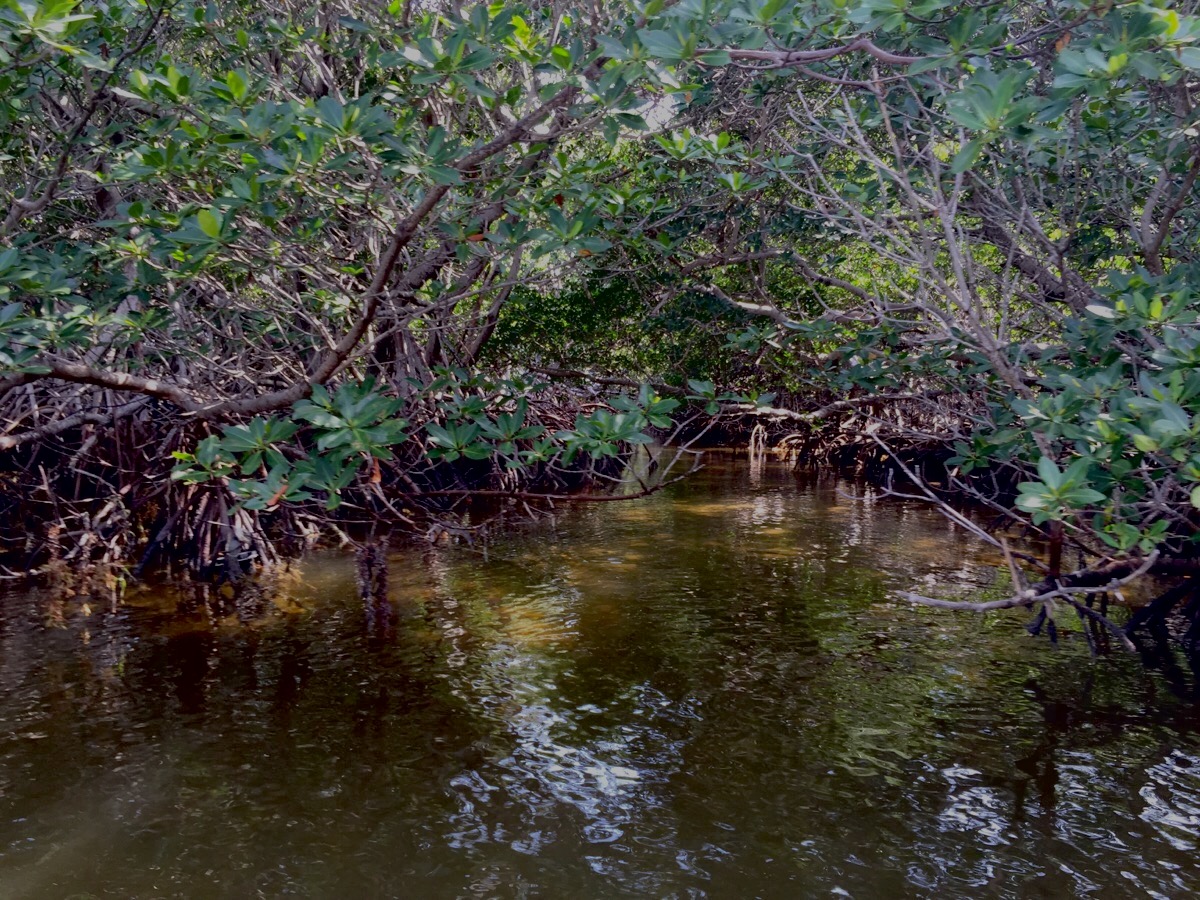 And then out of the red mangrove claustrophobia and back into the open waters of Cudjoe Bay. 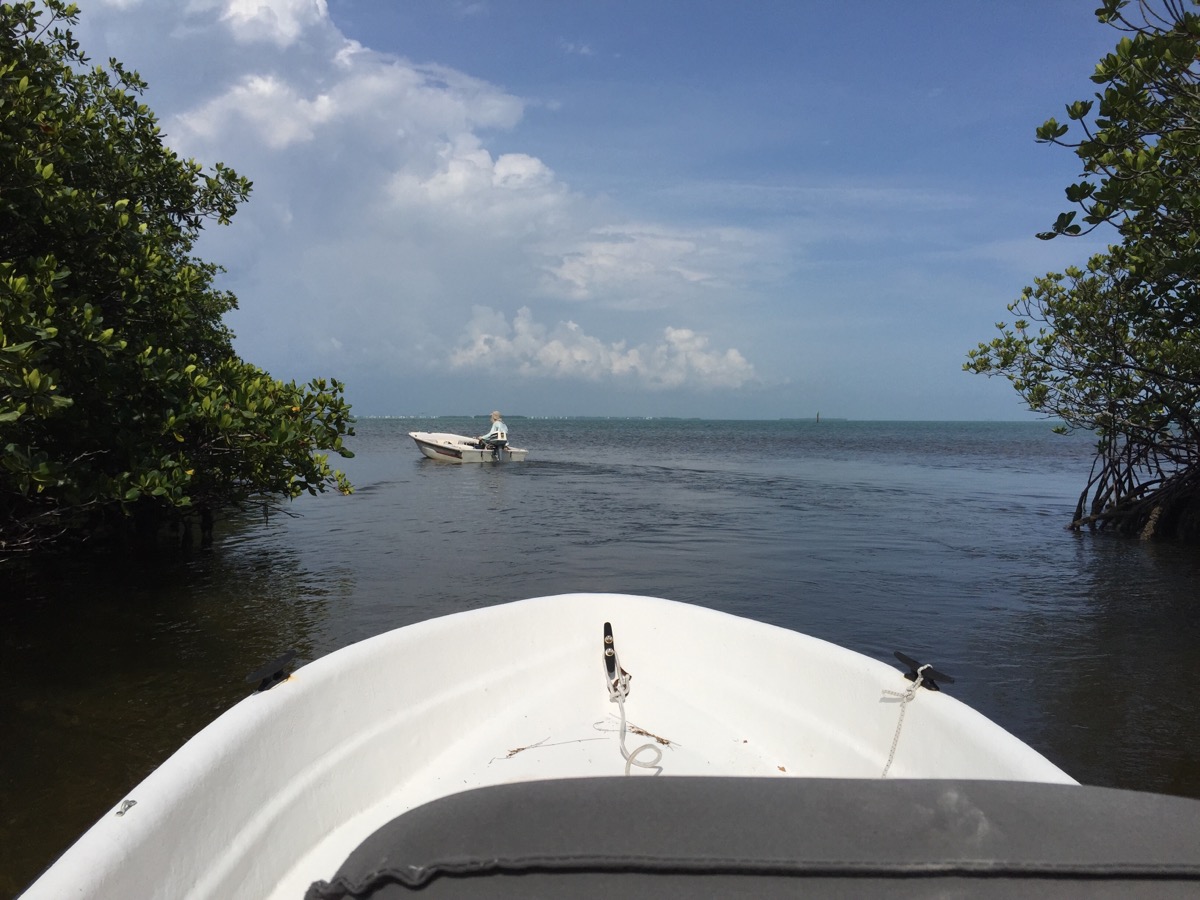 Sort of "open waters" because there is an awkward channel at low tide that caught Robert and sent him aground. Courteously he point the way to deeper water for me and you know it was shallow if our little 14 foot skiffs were in danger of running out of water. 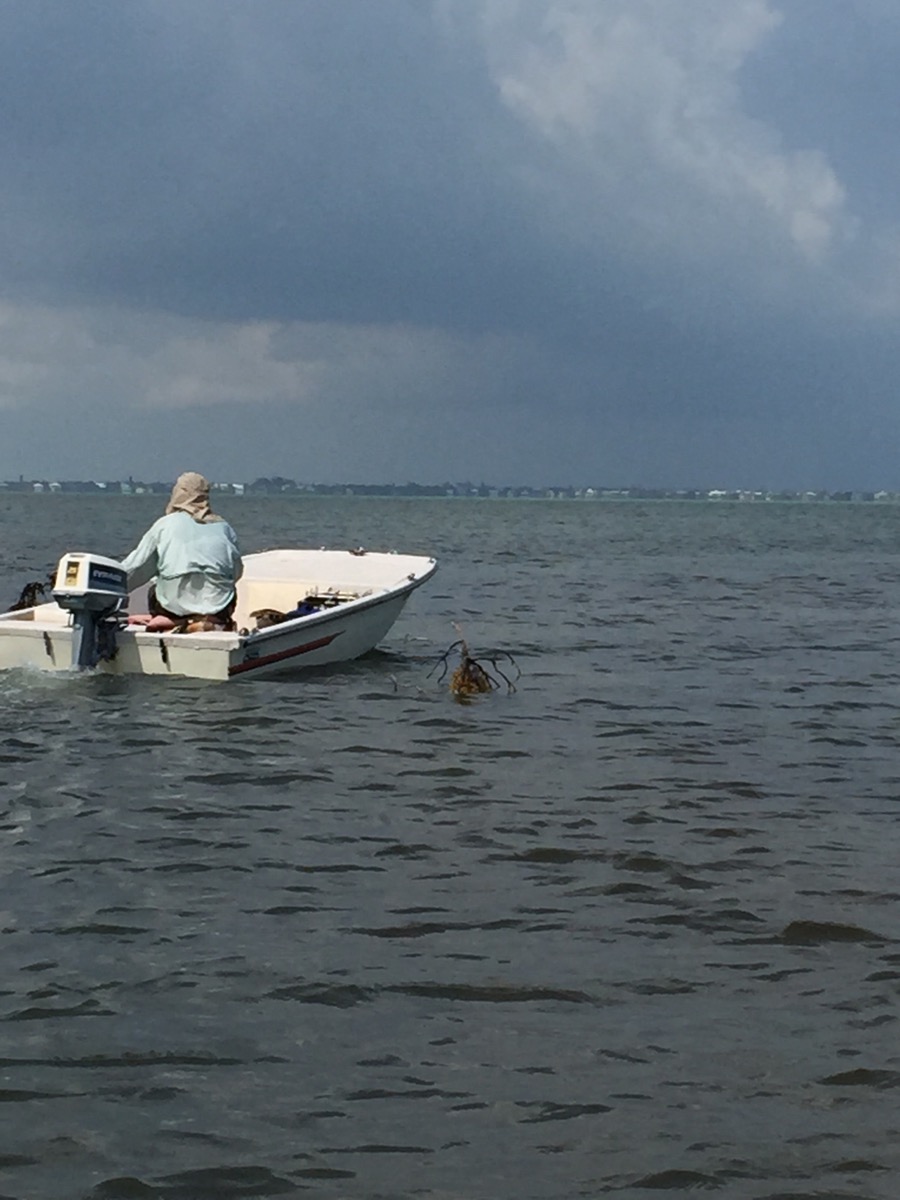 Old mangrove branches were planted to mark the way but the last two were submerged and you could only see them when you were about ready to touch bottom. 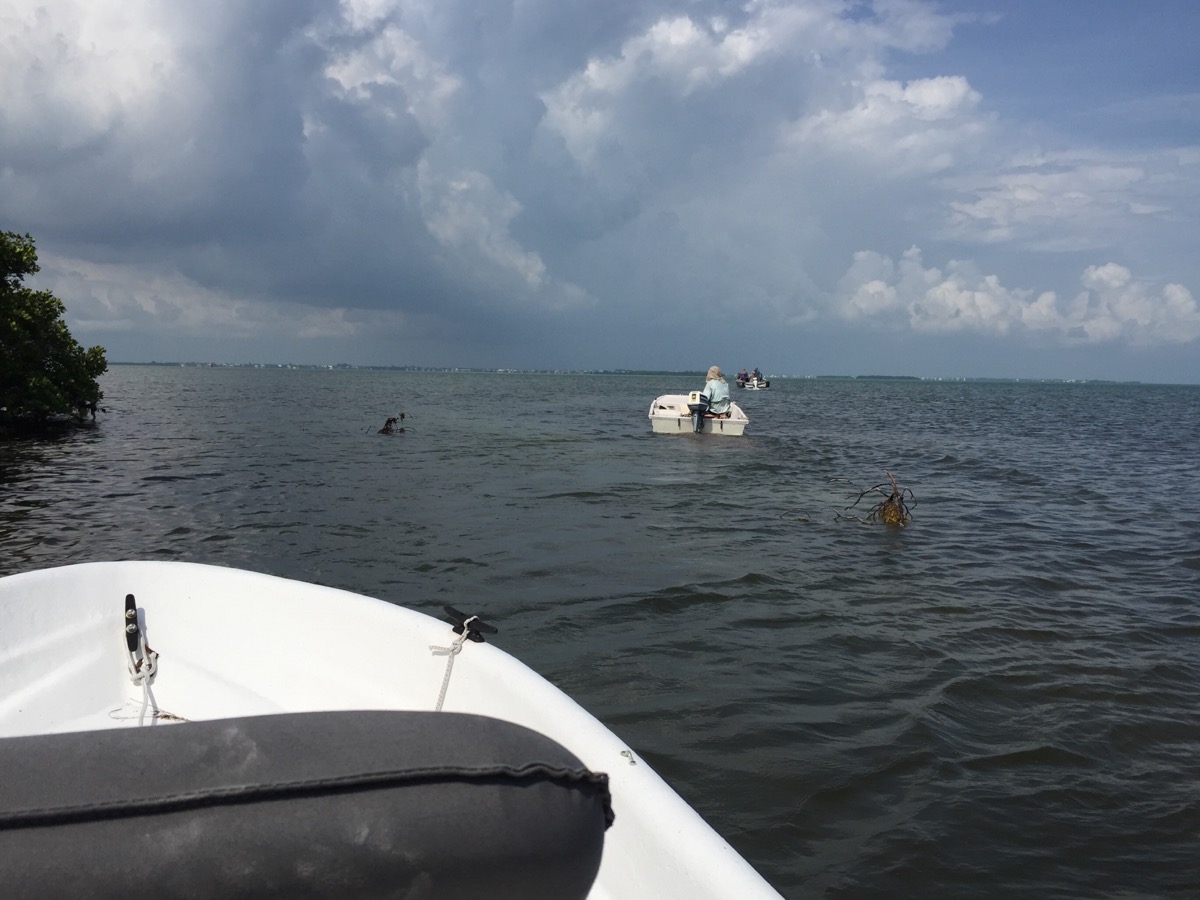 I think the last time I was here it must have been high tide as I don't remember following any channel. I just got up on a plane and shot out like the proverbial off a stick. 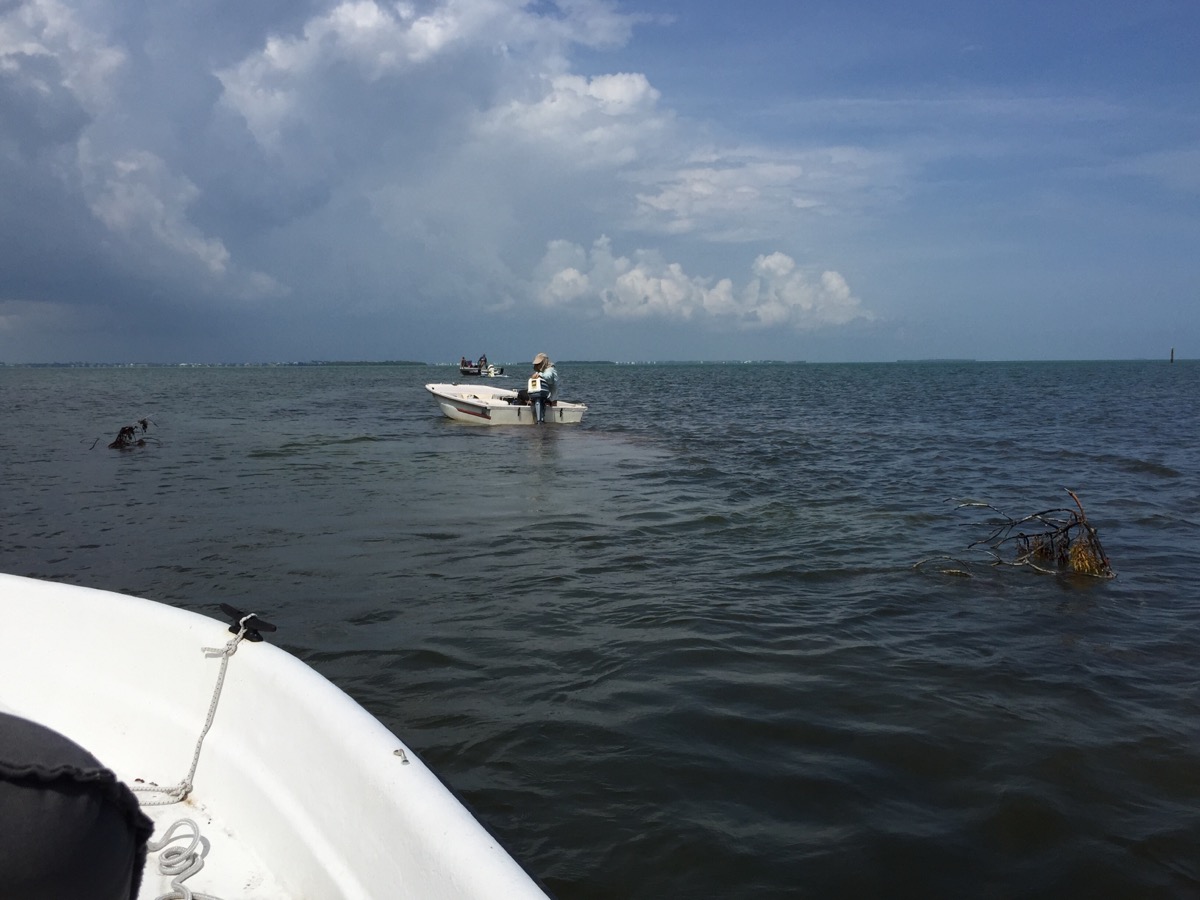 And it started to look like summer as though on cue with thick black clouds building and promising rain, that never actually arrived. I like summer rain so you could call me disappointed. 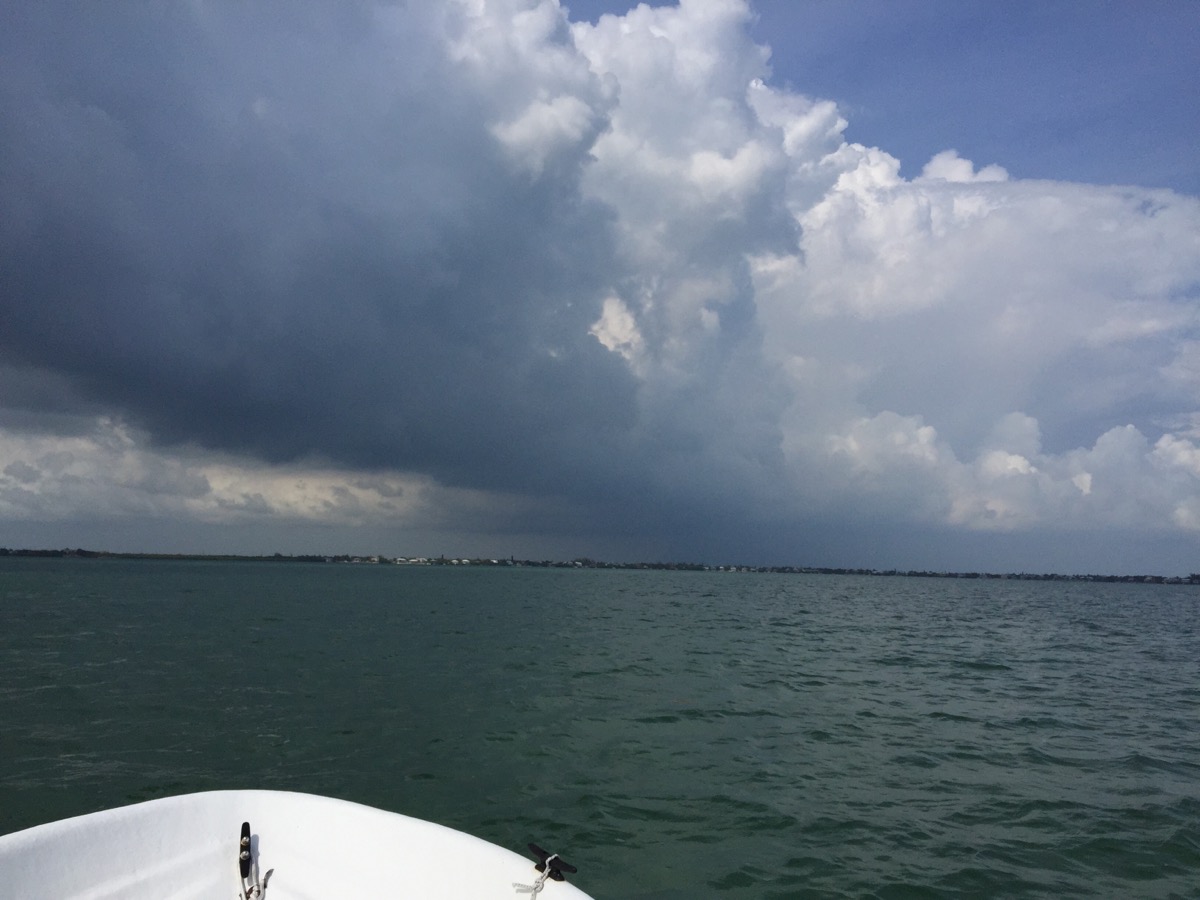 However the clouds worked to Cheyenne's advantage and she was pretty perky when I offered a walk. She is not a fan of hot boat rides, she doesn't swim and prefers being home in the air conditioning. 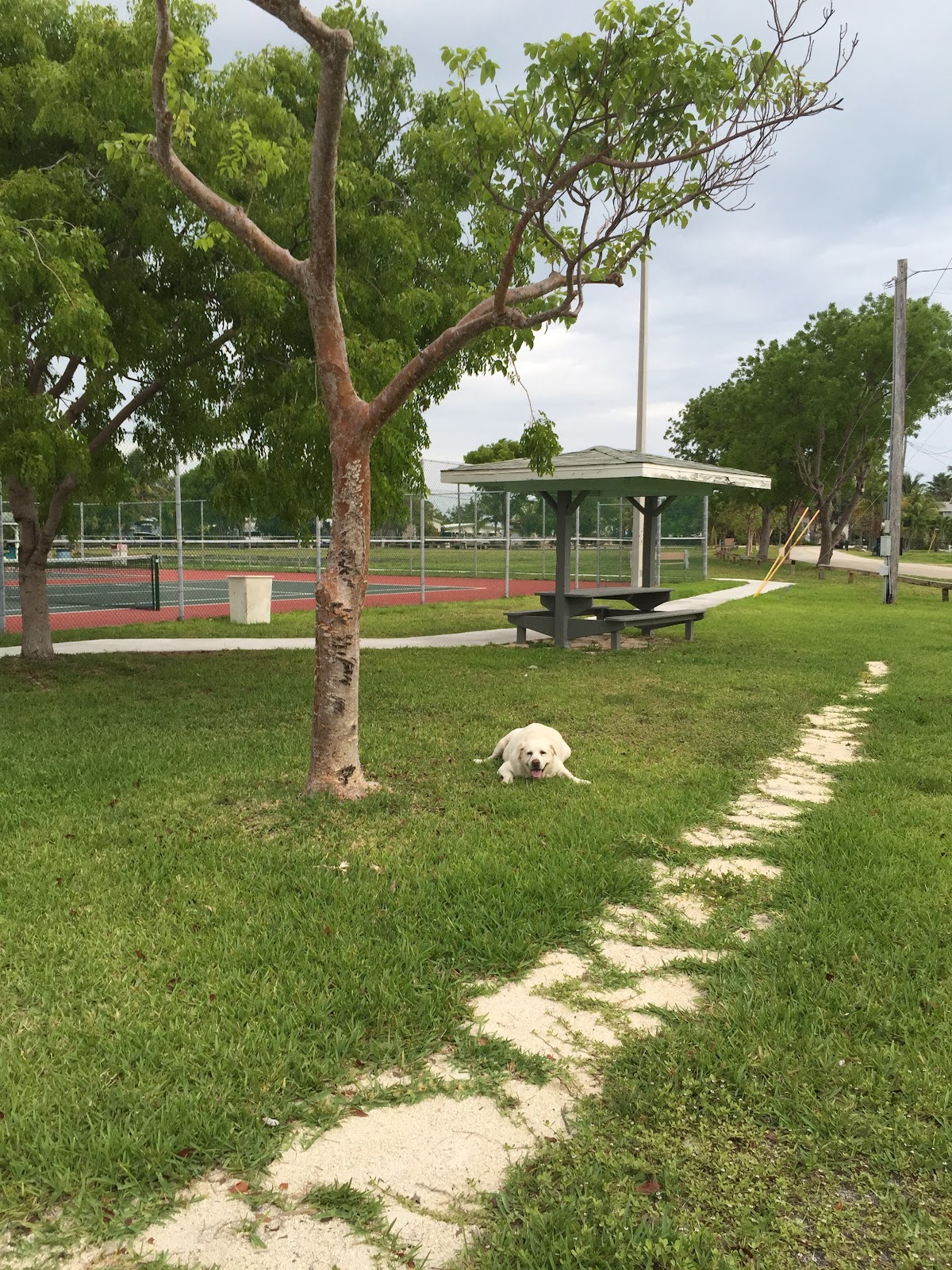 The podcasts are going gangbusters so if you want to hear some travel stories check out the website, iTunes or Stitcher, just hit the button in the webpage LINK.