The problem when you work night shift and you only get one night off is that sometimes you end up not sleeping soundly. Perhaps I was dreaming of the night before when some big girl's blouse called saying he wanted to speak to an officer because the clerk at a convenience store was rude to him. We send the officer out and they get to talk to the caller but one is left wondering what would happen in a  real emergency. Then Rusty noticed it was 3:30 and I wasn't properly asleep so he leaped up and next thing I know I'm getting a cold wet nose in my ear. That will wake you up no matter what hours your work. 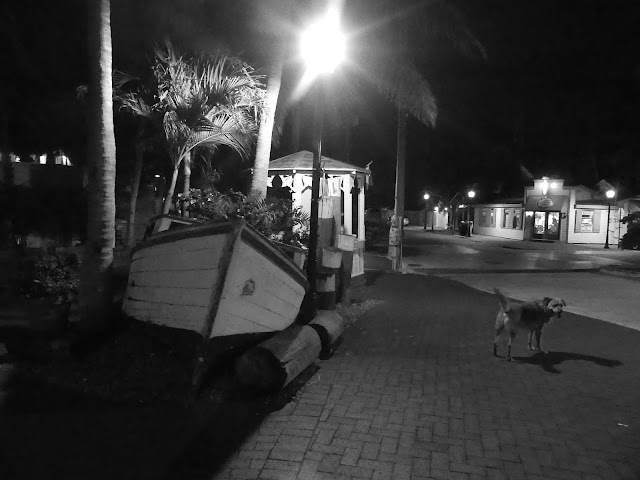 We haven't done a city walk in while Rusty and I so this was an hour of forced marching, him leading and me following. Starting at Waterfront Brewery. 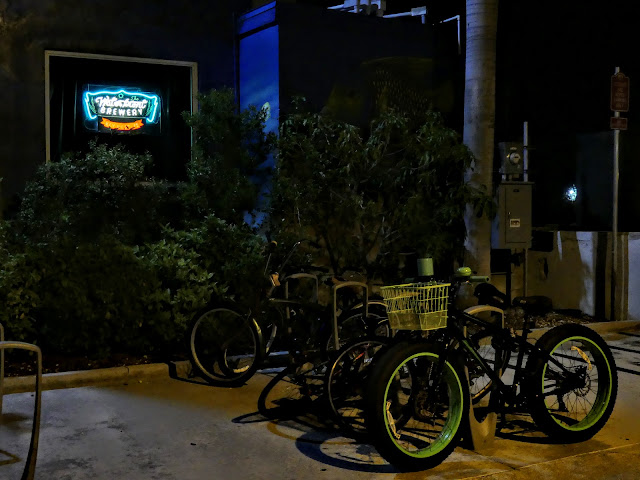 I trailed along behind my dingo dog, and I knew it was going to be a good walk as  he dodged this way and that sniffing everything. I tried to take a little time to take some pictures, looking for landmarks that I fear could disappear anytime in this rapidly changing town. The local marine hardware store known as Cuban Joe's on Caroline Street: 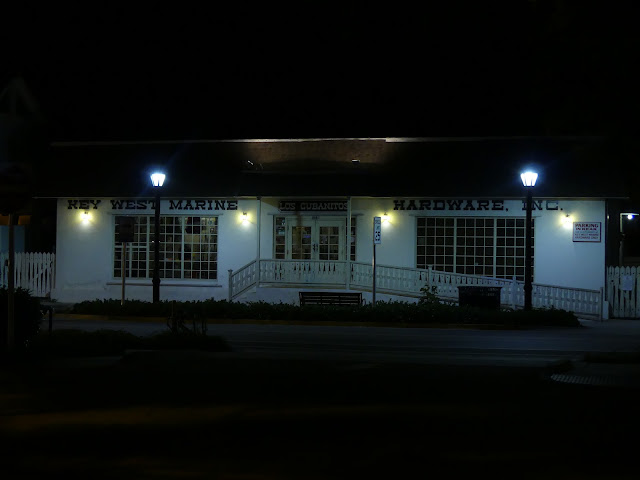 Then we got a call from a woman standing on a street corner saying she was induced to come to Key West to do a construction job and wasn't paid and had nowhere to live and she wanted  an officer to help her out. We don't judge we send them.  Then on the other line her former employer called accusing her of stealing his tools after he fired her for not doing the job. We advised the officers as they looked for the woman on her street corner. Her former boss kept calling back to let us know what a low life he had tried to help and one just got the feeling things here were not destined to go well. The officers found no tools in her possession and after a while the boss stopped calling so presumably they placated him as well. Exhausting. 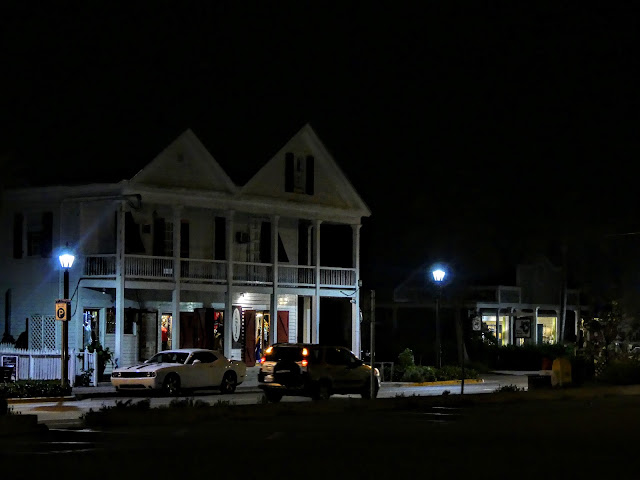 All too often we seem to deal with mistakes, often fueled by alcohol, not crime or even criminals. Police need to be psychologists as much as they need to be mediators and promoters of common sense.  I could never summon the patience to  be a counsellor for the incompetent. 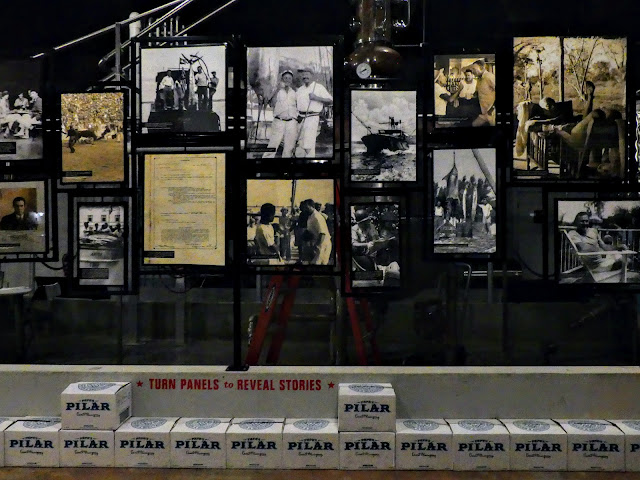 I like alcohol but nothing has made more inclined to seek out Prohibition as much as my job. The capacity for self delusion is infinite it sometimes appears as people drink far too much far too often and end up in a fighting mood, passed out in a public place or simply rude to the people they love. All of which ios fertile ground for 911. Criminal acts can be carried out but its just painful to hear people in the throes of delirium caused by drink. The other night they said a drunk woman passed out in the street had been poisoned. No evidence offered or sought - we just sent paramedics and an officer. 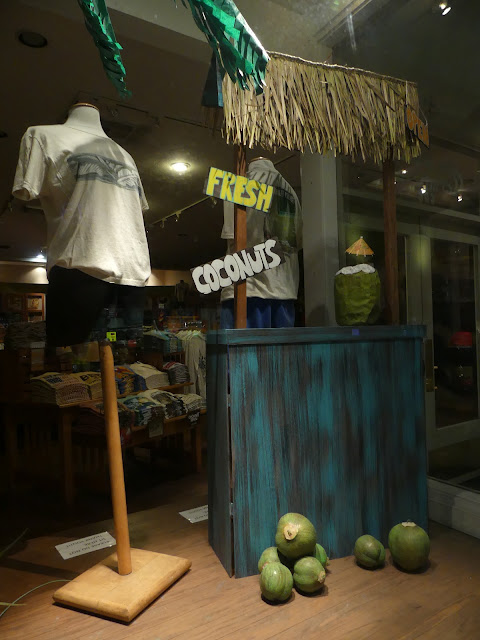 I listened to two groups of people yelling in the street while Rusty and I were walking. "Nobody's scared of your faggot ass!" one of the men shouted over the protests of the man with the "faggot ass." Charming I thought, shall I call 911? They went their separate ways, feathers unruffling as they went, honor restored by insults. I remember when a homeless woman got mad at me in Higgs beach park years and years ago. "Faggot!"  she shouted at me, "you queer!"  she stuck her tongue out at me much to the admiration of the others in her party who resented me walking my dog in the park. Thank you I replied, in this town its an honor to be gay. I exaggerated for effect but I don't feel being called gay is the most cutting edge or imaginative of insults. 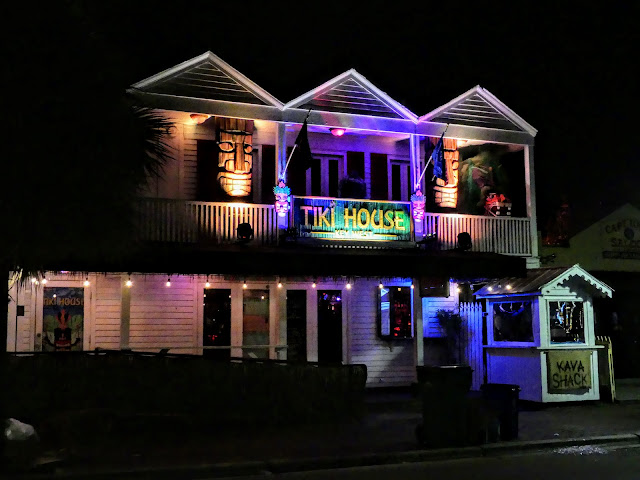 One in the group threatened to hit me as I stood my ground determined to make the point that walking your dog in the park is an activity that shouldn't be limited by bullies. Hit me I told the squinty man, hit me and I'll press charges and you'll go to jail. He backed off. Come on I goaded him, hit me! He walked away. They didn't bother me again but I resented and resent to this day how people will bully others into being scared in their own spaces. 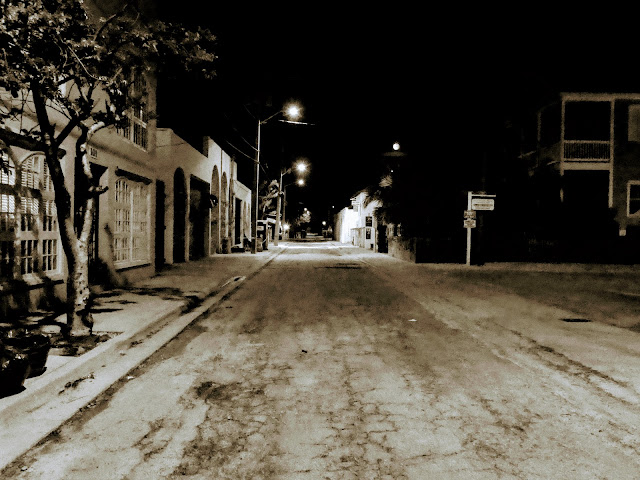 Ann Street
People ask me if I'm ever scared to walk Key West alone in the dark. Not at all. I'm not even scared to answer 911 anymore. I think and I hope I've heard it all.
Posted by Conchscooter at 12:00 AM 1 comment: Links to this post