This essay is from December 2009, and as the last ten days of this year unspool I have included it because Fat Albert is a presence over the Lower Keys and because the Lower Keys have figured hugely in the life of this blog and the 2500 essays stored here. Next month I will be returning to a once a day format, with Chuck of Old Town Key West and we will publish two essays a day, one each on http://TheKeyWestLocal.com. I know Chuck is only interested in Old Town, which is his choice but for me all the Keys from the Seven Mile Bridge south are my playground and will continue to be on our new shared format. I hope you enjoy these retrospective essays and rest assured that while I take a break from daily posting my energy is going into creating the best new all around Key West website with lots of continuous fresh content. Please note that Mad Dawgz BBQ has closed since I first published this story, and that is too bad because I liked them.


It happens sometimes when giving directions and you mention "Blimp Road" in passing, that they think you are joking. "Uh, Blimp Road?" and you just nod your head sagely. 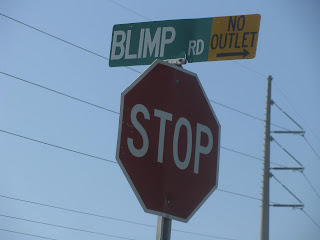 It really does exist as you can see. It's a handy street not least because Mad Dawgz BBQ stand is right there, and this is the best barbecue in the Keys. 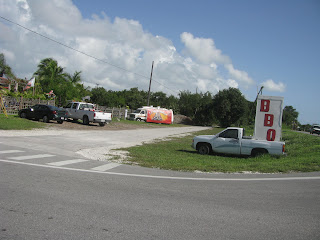 Across the Overseas Highway my wife's "temple"crouches like a monument to physical fitness. it's called Pirate Wellness and is actually a very decent gym if you like those sorts of places (I don't). More obviously there is the Kickin' Back convenience store on the south side of the Highway, and that big white sign tells me I'm five minutes from home on my commute in the morning: 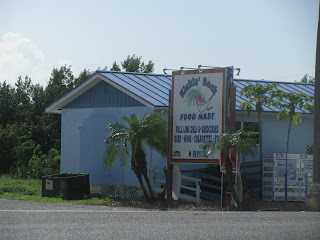 Blimp Road itself is home to the dump, now known as a transfer station, home to recycling and waste removal and all that good stuff (bring your used motorcycle oil for clean disposal) and also to it's namesake, Fat Albert: 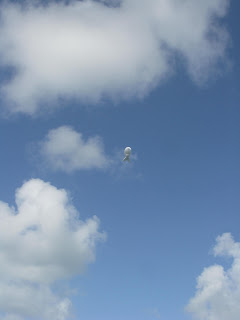 Blimp Road is couple of miles long and runs dead straight north from the Overseas Highway at about Mile Marker 21: 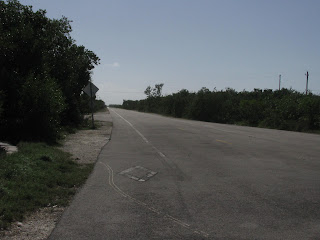 And the closer you get to the end of the road the bigger Fat Albert gets: 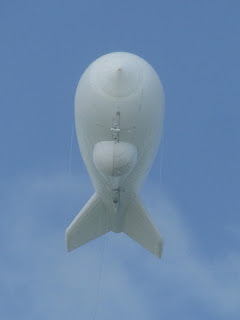 And bigger (a telephoto lense helps): 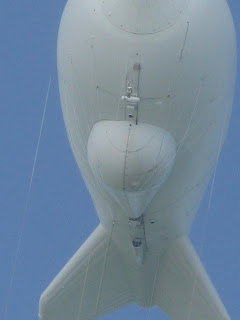 I found a bunch of excellent info about Fat Albert on the Internet, and learned to my surprise that it is in fact part of NORAD, the US Air Force radar defense alert system beloved of movie makers. They say Fat Albert uses radar to detect smugglers but I had an experience when I wondered about that. I saw a smugglers' boat in a Stock Island marina after they had dropped off a dozen Cubans and had been located by the Coastguard and chased into Oceanside Marina. Cuban smuggling is big business these days as Miami Cubans will pay ten grand each to have their friends imported. Smuggled Cubans aren't allowed to stay so when they land they have to say their boat sank because if they come over on their own and land on US soil they get to stay, but if they are smuggled they don't (call your US representative if any of this doesn't make sense). So this smuggler's boat was docked and it was a 25 foot black inflatable with three blacked out outboards and I got to wondering if rumors that they use a heat seeking device on Fat Albert may not be true. That boat seemed like it would be really hard to 'see' on radar...

Be that as it may the blimp flies without any humans on board though it is piloted from the ground. I learned that when I actually met a former pilot, and though I was bursting with questions I refrained as it seems rather silly to ask a person about their involvement with something as secretive as NORAD...Anyway I learned on line that the helium filled blimp flies at 10,000 feet (3,000 meters give or take) and is 175 feet long (55 meters more or less) and 58 feet around (18 meters) and carries 1200 pounds (400 kg) of something mysterious called "payload." It is launched from a ground station visible across the mangroves: 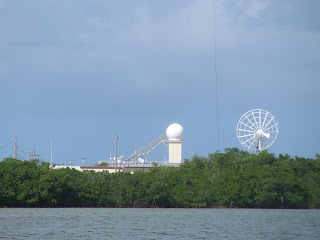 And this is the ground station seen from the water: 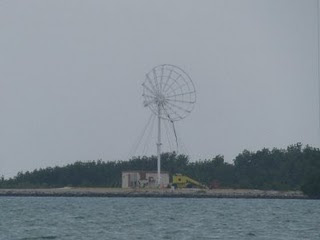 If you have any doubts about which direction the wind is blowing Fat Albert will point the way: 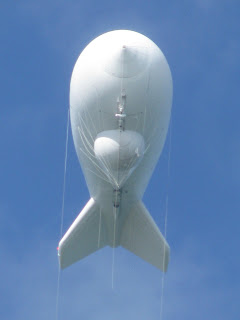 At night you can see Fat Albert blinking red in the night sky. Not everyone sees it though and I seem to recall last year a small private plane took off from around here someplace and flew straight into the wire holding up the blimp. They say the wire has a 26,000 pound (13 ton) breaking strain and it didn't do the plane any good which spun out and crashed killing the people on board. The blimp kept flying until they retrieved it to check for damage. If you fly a plane, like a sailor you should check your charts. And look for blinking lights aloft: 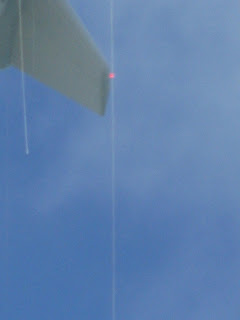 Cheyenne was indifferent to the delights and mysteries of flying blimps. She is also not interested in the water and sticks firmly to dry land. Next summer I am planning on teaching her to enjoy the water. 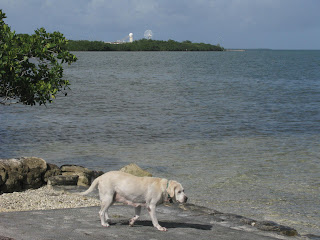 This is the view looking south down Kemp Channel toward Summerland Key on the left. 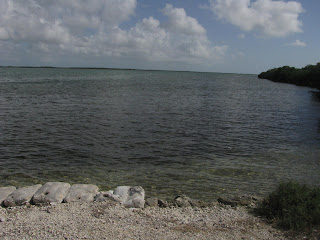 We have fun together. Awww! 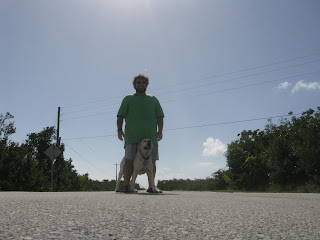 This is the end of Blimp Road at the boat ramp: 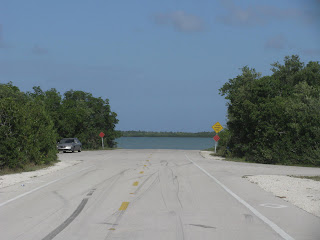 Just before you reach the end of the road there is a side street to the left but it's not open to the public: 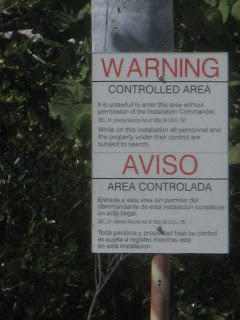 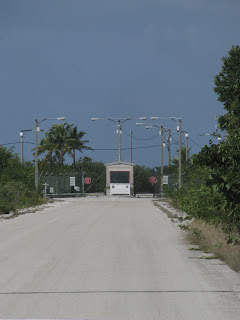 The turn off is exactly this far from the end of the road! 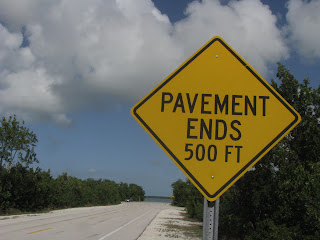 The exact cost of flying Fat Albert isn't made public as far as I can tell. But we do know that before Hurricane Wilma in 2005 a similar balloon flying alongside the NORAD blimp carried TV Marti anti-Castro propaganda at a cost to taxpayers of a cool $16,000,000 a year. And naturally the signal never got through as the Cuban authorities jammed it, but it kept the anti-Castro fanatics in Miami happy (and voting Republican in a keystone state). Now we are back down to one: 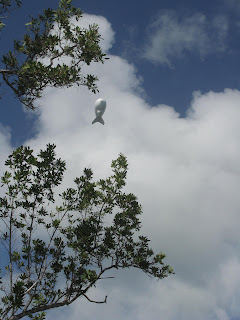 Fat Albert is barely visible in this photograph but it is amazingly visible all round the Lower Keys in real life. It got separated from the ground once in the mid 90s and they had to shoot it down before it reached Cuba and nowadays it seems they have a remote control that can deflate the blimp and bring it to earth if it breaks loose again. One sign of impending strong winds is when Fat Albert is brought back to ground : 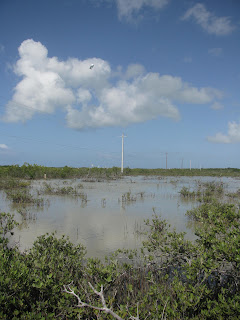 Fat Albert may be costly but it is amazingly unobtrusive and life in the mangroves goes on as usual. If you stand right under the blimp you can hear it's steering propeller buzzing like a distant lawn mower on a summer afternoon. But out here it is silent and unnoticed: 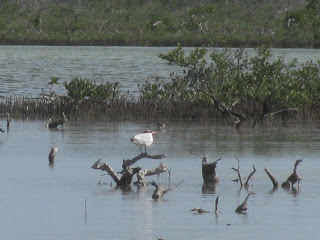 TV Marti has thankfully faded away but Castro's in-laws, the Diaz-Balarts of Miami, who have pledged eternal hatred still push for Radio Marti to send propaganda to Cuba and here it is at Mile Marker 15, an unobtrusive gated little road opposite Baby's Coffee, according to Google Maps: 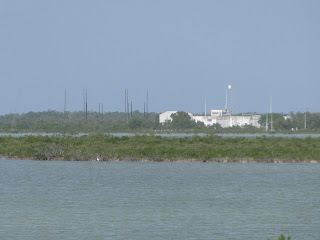 More taxpayer dollars being happily wasted to keep the Miami Mafia (as Castro calls them) happy. I listen to Radio Nacional on 950am (classical music) and Radio Reloj at 570 and590am (news headlines) and Radio Rebelde 620am which means I suppose I am getting a freebie from the Cuban government. Pity it's so boring, all Communist propaganda of a rather old fashioned sort! On the other hand I can't imagine how boring it is to be on the ground piloting the stationary blimp. The Cold War lives and demands its sacrifices I suppose.
Posted by Conchscooter at 12:01 AM No comments: Links to this post