When things go wrong they don't stop going wrong just because your scooter blew up. There's a certain knock on effect. Take yesterday. A quick glance at this entry will show no pictures. Why? Well, because the Vespa blew up...of course! It happened like this. 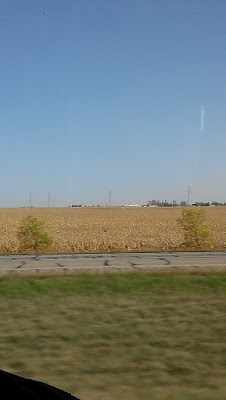 I got a ride during Jeremy's lunch hour to the Mason City Greyhound station and there I sat for several hours waiting for the afternoon bus to Des Moines. It's in the airport and that puts it in the middle of many Iowa cornfields. An American without wheels is half a human being and I was uninspired to walk anywhere so I sat close to the power outlets, snuggled inside the warm envelope of wi-fi and safe from the cool 55 degree breeze.

The bus driver was a pink skinned granddad out of a 60’s TV show. With a thick flat Minnesota accent he took the little old ladies' bags and stowed them carefully. He ushered us into his bus like grandad welcoming the family to Thanksgiving dinner. The bus was quite full but the almost empty rear bench was occupied by an African American youth sprawled in the corner, a mountain of flesh topped by a hoodie radiating blackness in an all white bus. I made a beeline for the other end of the bench. He grunted I said hullo and we rode in silence for two and a half hours. 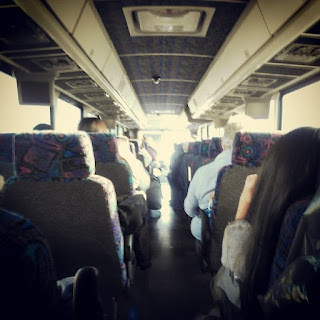 The riders between the all white driver and the all black corner seat at the back were polite and silent, sleeping and reading and staring out at the passing cornfields in the strong autumnal sun. Then another African American boarded at the Boondocks motel stop, a fading fifties motel with peeling paint and diesel pumps for trucks. It wasn't Ramrod Key for sure. But it was where the second African American passenger joined the bus.

He was older, gray haired tall and thin and stooped and he sat near the front. The bus took off. Into the roaring of the engine and the silence of the well behaved passengers came a sudden extraordinary sound. Someone must have unplugged their headphones...a harmonica tore through the silence, riding the scales like the bus was riding Interstate 35. The women in the bus looked around seeking the alpha male with the balls to entertain us. I saw heads darting between seats like prairie dogs checking for the source of the sound. Shoulders shook and laughter rippled. Suddenly we were in a wagon train making our own entertainment far from home. Everyone perked up. 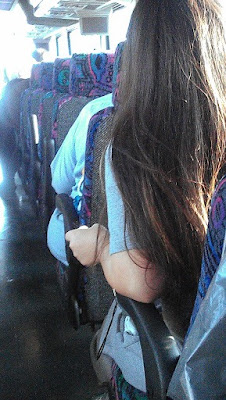 Once he had the bus' attention the old black dude sucked the passengers around him into conversation. How you doin' hows the grandkids, how we be riding the bus - stuff like that. He had them in the palm of his hand, a little more mouth harmonica and then he dropped the F bomb. just conversationally, you understand, in some thought I couldn't catch at the back of the bus. But there it sat like a huge dog turd at a garden party.

There was a sudden collective sucking of Midwest breath across the bus. Jabba the Hut sitting across from me started shaking, trying to hold his laughter in. I made eye contact almost by accident and he turned to look out at the cornfields. It was a joke reserved for particular passengers and he was the only one on this bus in that particular tribe. I was excluded and returned to my Kindle. The bus returned to prim silence. 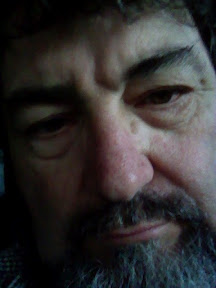 As we approached our destination the passengers, unasked, dropped their trash in the specified container and I wondered about the ones going on to romantic destinations like Omaha, Dodge City and Cedar Rapids. I know enough to know Wyatt Earp is now just a legend but I wanted to keep going riding the prairie. I'm sure they are all dull towns but they are names to conjure with. Me? I had a hotel reservation next to the Des Moines airport. 5.6 miles away according to my GPS, why yes I have drunk the electronic cool aid. It looked easy enough on my little map, I figured if I walked I would see a bit of Des Moines.

Tomorrow my walk through the Iowa capital. Keep Right At All Times.