The recent cold front is lingering a little bit bringing night time lows in the mid 60's and crisp cool winds under empty blue skies. It is perfectly lovely and the reason why northerners want to own million dollar wooden tents loosely described as "houses" crammed into the narrow streets of Key West. No parking, no offsets, no services, no snow. 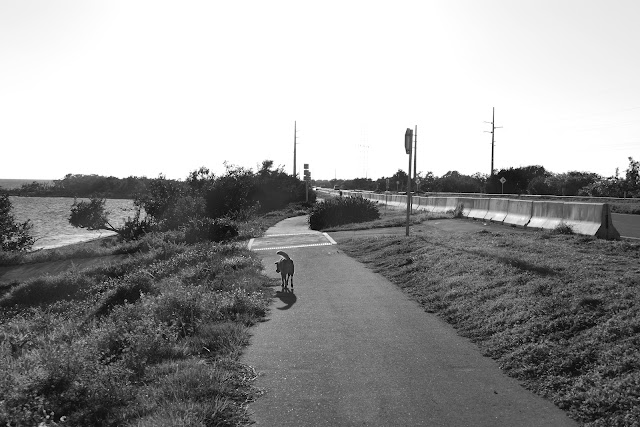 This was the scene when I arrived at West Summerland Key and unloaded one anxious dog. Rusty was ready to explore even though he's been here often he loves sticking his snout in the bushes and rolling in the grass. I come here often because I enjoy the raised views from the only hilltop in the Lower Keys and also because I can spend happy time trying to find different angles and views to photograph. 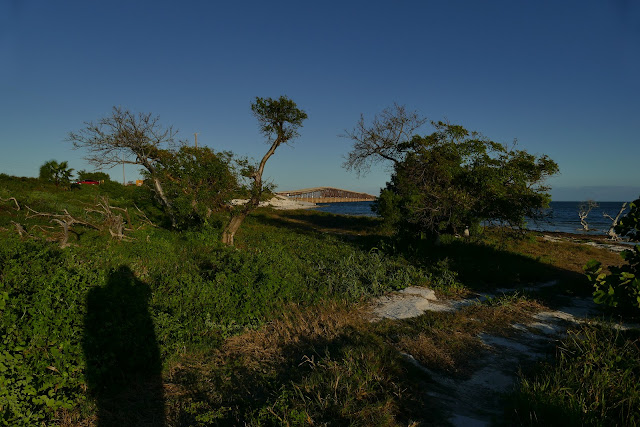 Some people, more up-to-date than I, call this place Scout Key, so named for the scout camps that flourished up the highway prior to the devastating visit of Hurricane Irma. West Summerland Key is a name that appeals to me owing to its unknown origin and lack of symmetry. The island known as Summerland Key, home to a post office and zip code, lies 10 miles to the south on Highway One,  which puts this island east of the main Summerland Key . Why this island was designated as "West Summerland" no one knows and the incongruity of it being muddled with the real Summerland Key also labeled as west of  it pushed geographers and perhaps postal officials as well to cast around for a new name. Scout Key fit the spot and the state department of transportation made it official with a little sign. Which I ignore when I arrive on West Summerland Key.. 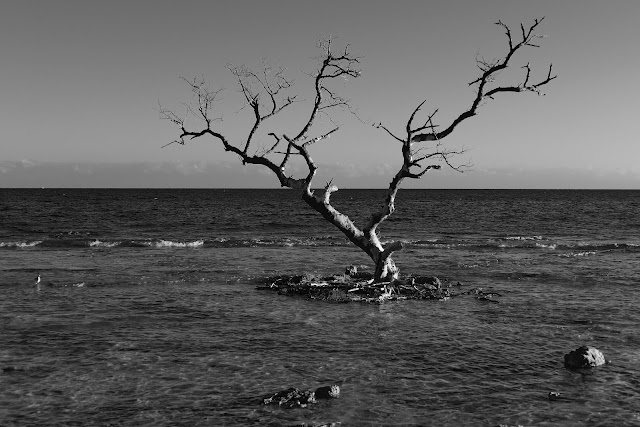 Whatever the name it remains the same lump of rock raised artificially by Henry Flagler's engineers to enable trains to climb to the Old Bahia Honda Bridge in 1912. And that elevation gives people like me pleasure as I have an actual hill to stand atop of and enjoy. The dead trees left by Irma were much prettier before September 2017 but in their starkness they also provide grist for my photographic mill. 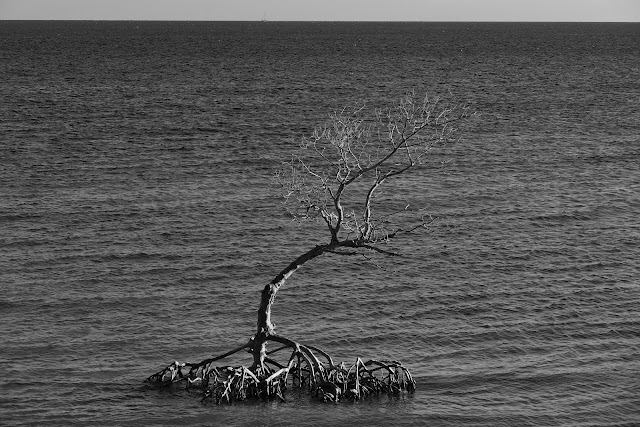 By the way you may not know that none of these islands were named before the railroad arrived. The ones that had people on them, two or three at most, had names but all the rest were mapped and named when the rails arrived. Marathon was so called because it was a marathon job to complete the track laying to the Knights Key ferry connection to Big Pine before the big bridge was built. The other islands like Ohio and Missouri got their names from the homesick railroad navvies working on the eighth wonder of the world. 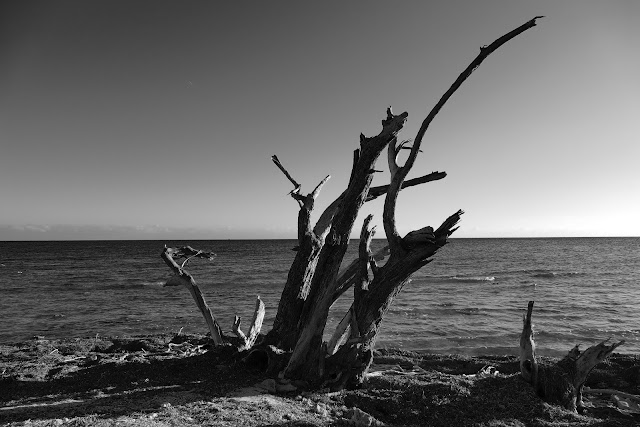 Lake Surprise south of Homestead got it's name because they didn't have aerial surveying or satellite views in 1905. They say Cudjoe Key where I live, pronounced the Anglo way - "Kud  Joe" - was named possibly for a runaway slave who pioneered there or because the word is a corruption of something else or because no one knows.  Ramrod Key was named for a British ship that sank on the reef south of what was formerly known as Roberts Island. 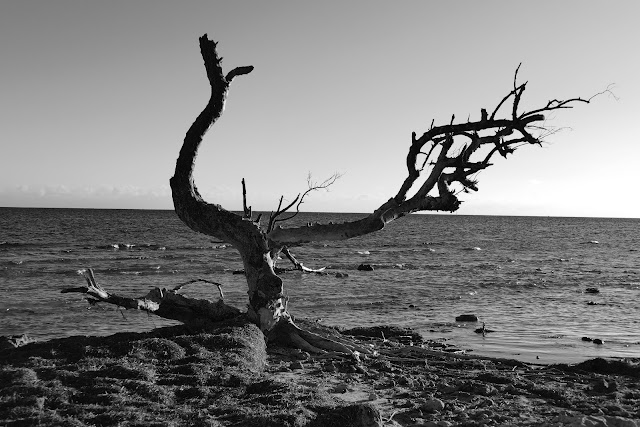 This strange and oddly attractive bush looked half dead but was apparently going through some sort of molting process.  Shadows and light all jumbled up in the anonymous bush. 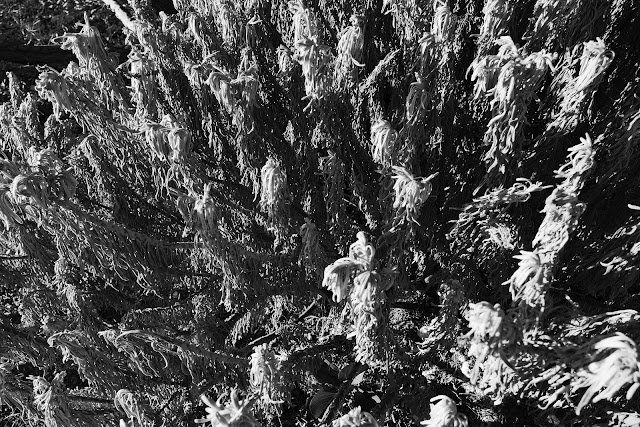 This damaged area under the bridge is coming back. I climbed the hill for the first time in months to see what they were doing and they are doing a nice job. All those sandbags are going back to cover what the hurricane uncovered. Looking west at the setting sun, there used to be a pump house near the beach, built in World War Two to help push fresh water to Key West Navy bases from Miami. Irma put paid to the structure which had been empty for years and now it's become a pile of photogenic rubble, as you shall see a few paragraphs further down. Keep scrolling!

I told you he was excited to explore: 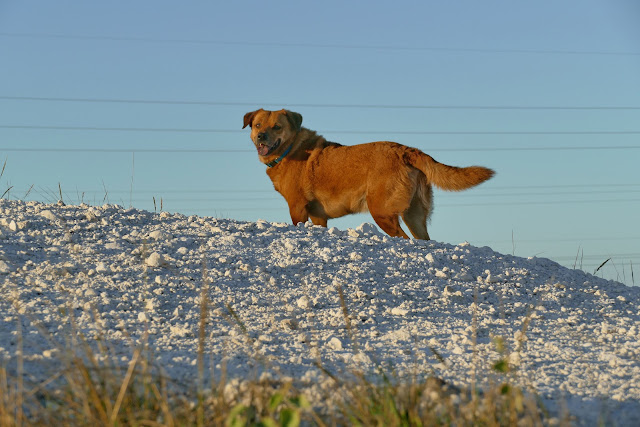 The old bridge is being preserved at the other end where the state park at Bahia Honda keeps it serviceable for use as an observation platform. 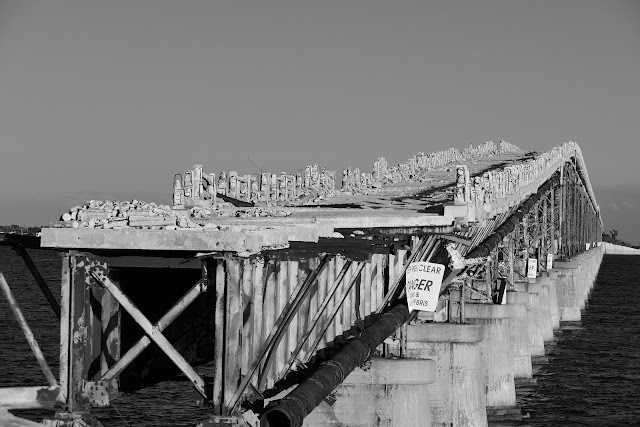 This end is crumbling. 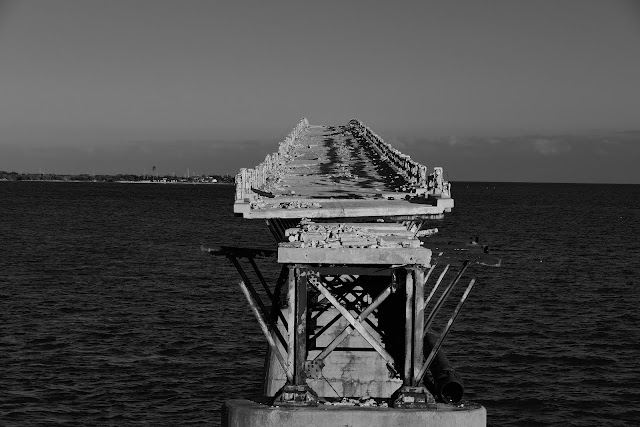 And the crumble seems to be happening quite fast: 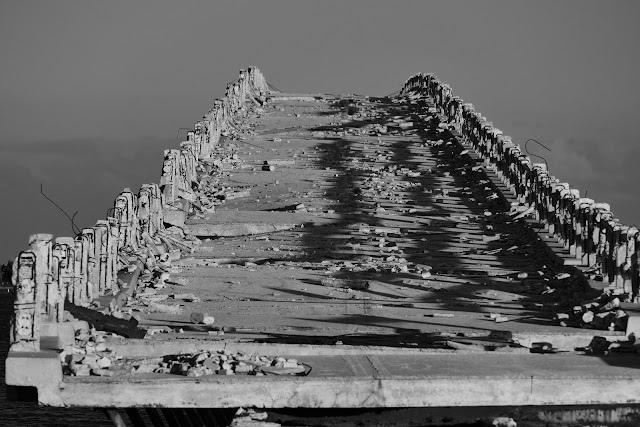 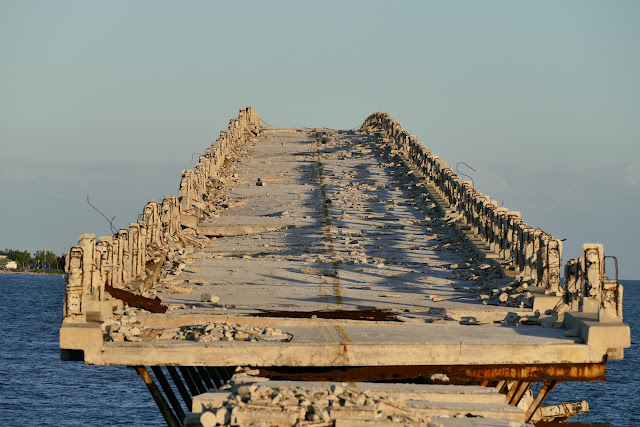 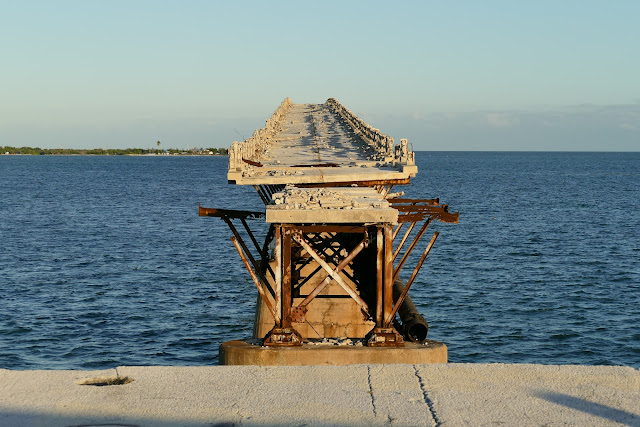 They call it Bahia Honda because it is, as the Spanish name makes clear, a Deep Bay. That was why they had to build an elaborate railway bridge to cross the bay in 1912.  Indeed it was in some respects a more complicated engineering feat than the Seven Mile Bridge which was just a matter of plodding along dropping cement into casements for seven miles. Here they had to figure out to go dozens of feet deep into the bay. The construction of the highway bridges was compared to the contemporary Panama Canal for engineering difficulty and strokes of brilliance in getting the respective jobs done. 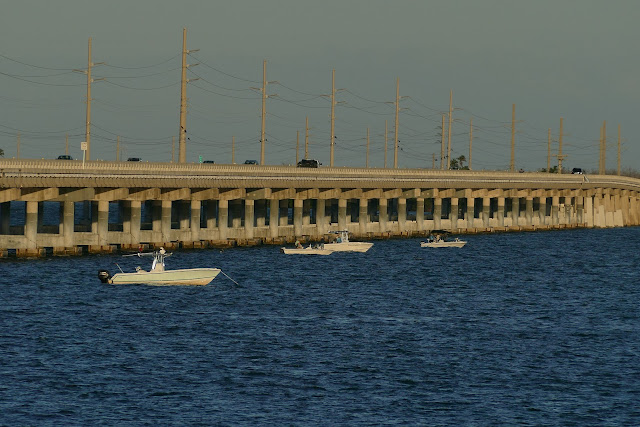 Irma tore out these cement steps, below, leading down to sea level and very useful they were to me on my walks: 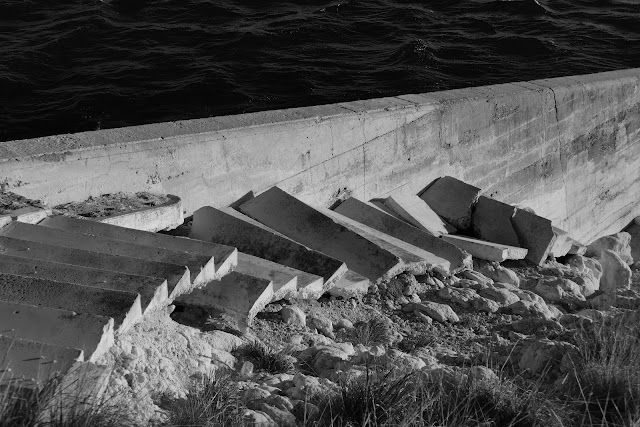 I take their loss, along with the destruction of the trees as a personal affront. 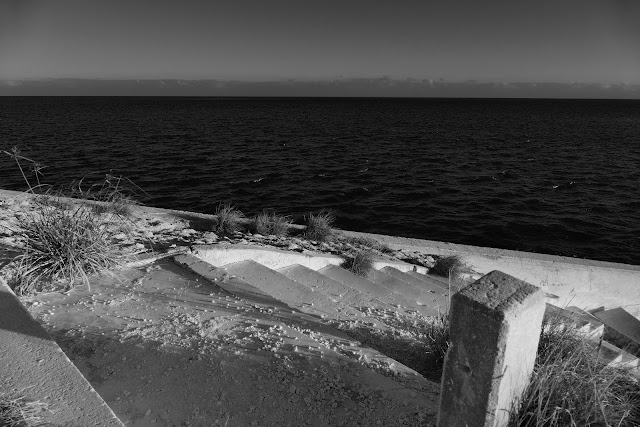 Here at last are the remains of the pump house: 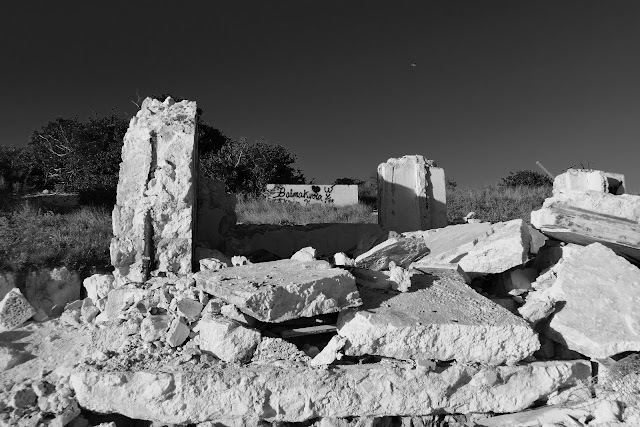 The old water pipe was replaced in 1982 with the opening of the new main road to Key West which also carries the larger diameter water pipe alongside. Greenery and shrubbery in Key West was encouraged by the arrival of a secure flow of water. Prior to 1942 the city survived on rainwater cisterns and growing ornamental attractive trees and shrubs was not practical: 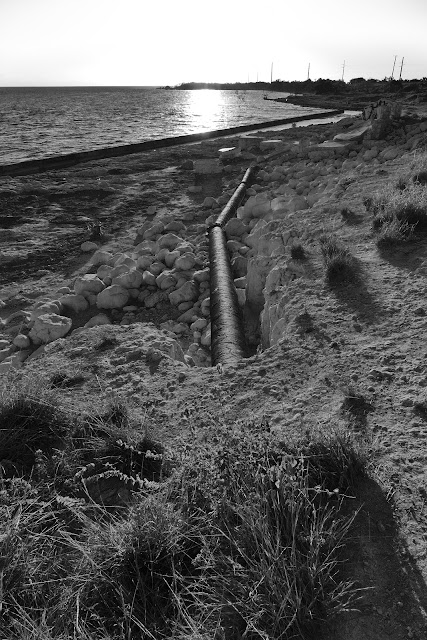 Lime stone rubble. Picturesque while horrid to walk on. 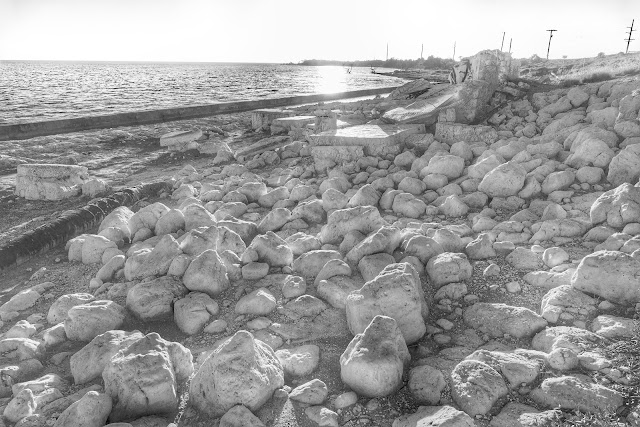 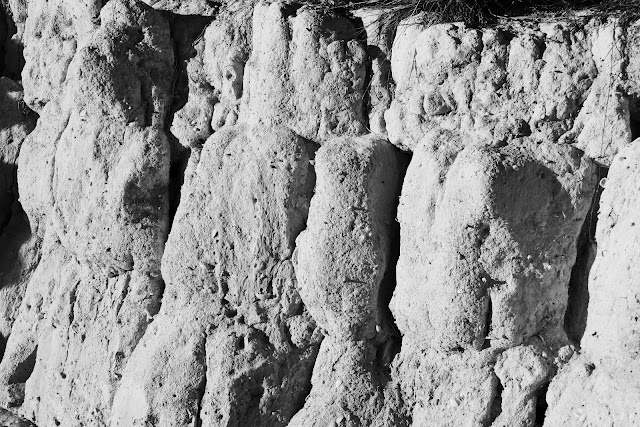 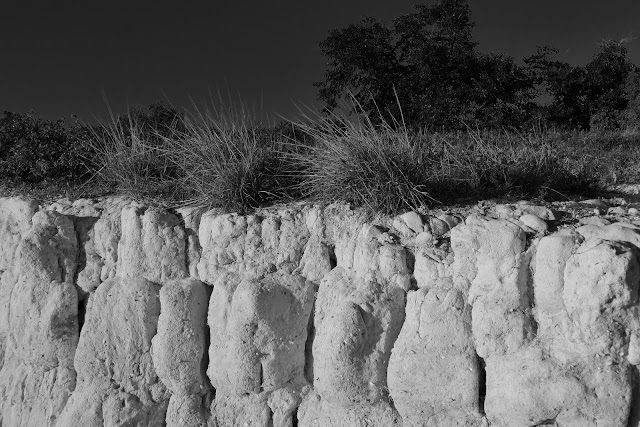 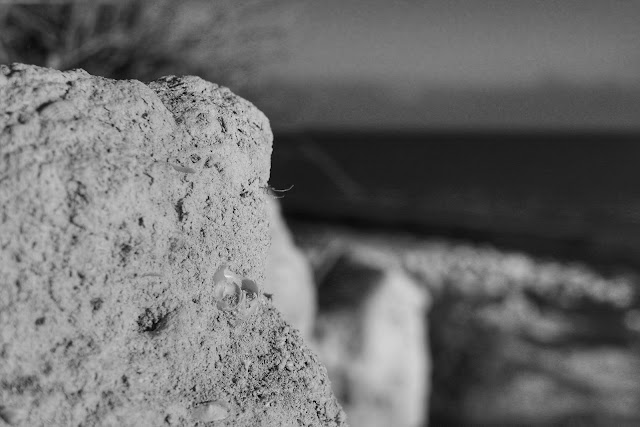 I met a  family with not much English who found Rusty delightful and he returned the compliment. He is very clear whether he likes someone or not. In the event he doesn't get a good hit he circles away giving them a wide berth so I follow his example and give certain people we encounter a wide berth. 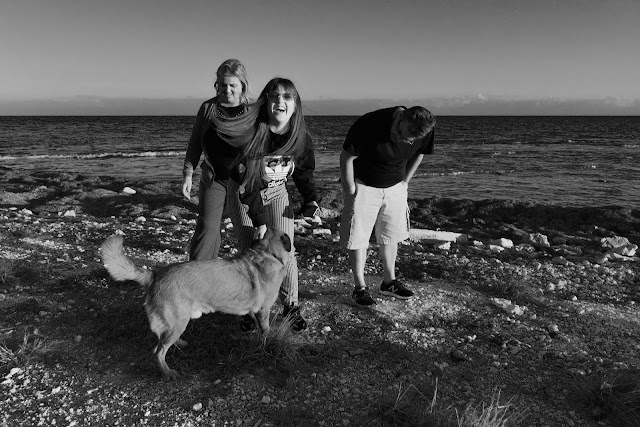 It was an event filled and enjoyable end to a  sunny winter day was our West Summerland walk: 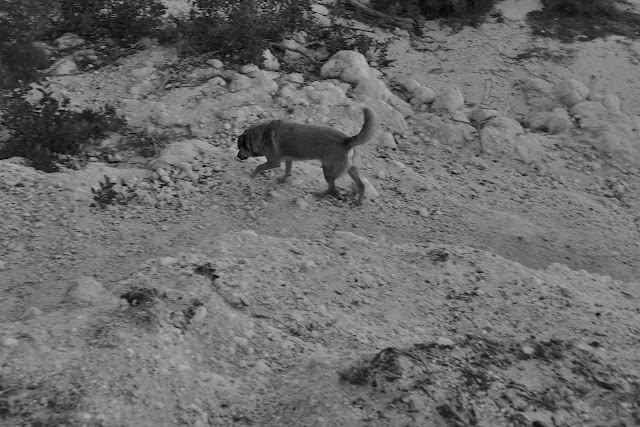 I see cars pull up in the rough parking lot alongside the highway. They stop for a moment and most keep going while a few step out and snap a couple of pictures and the hardiest of them totter down to the beach to do some combing. Florida is a subtle state lacking as it does mountains and sweeping vistas and other obvious points of beauty. 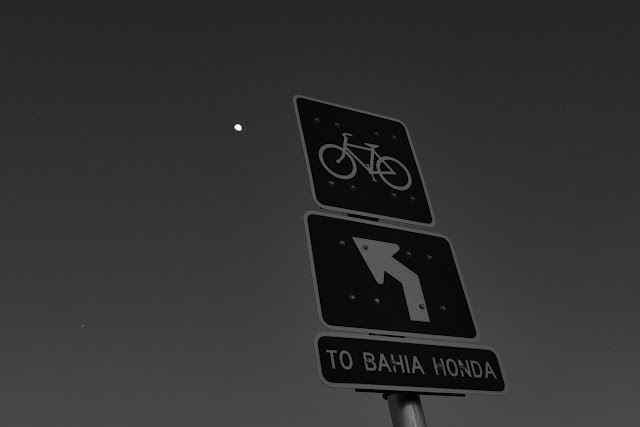 I find if you take the time to look closely you will see things worth looking at. I plan in 2020 to keep on walking the mangroves, as well as downtown Key West while taking my dog and my camera with me. I shall report back from the edge of this experience. 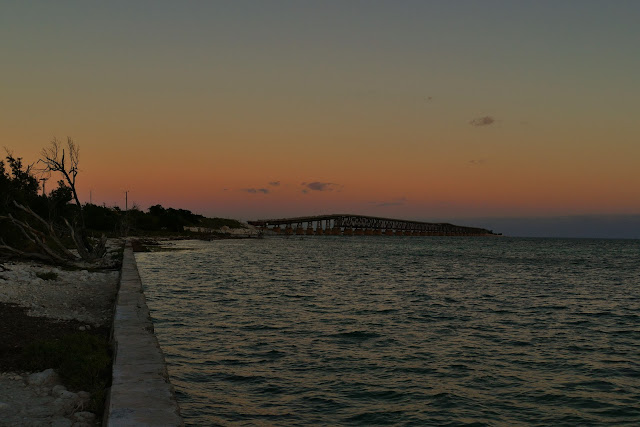 I hope in a  few years when I take my leave of absence from the Keys and travel for a while, someone else will take pictures so I can look from afar and see how the place is doing. I don't find the over saturated sunsets selfies and palm trees populating Instagram's Key West page fulfill my needs. 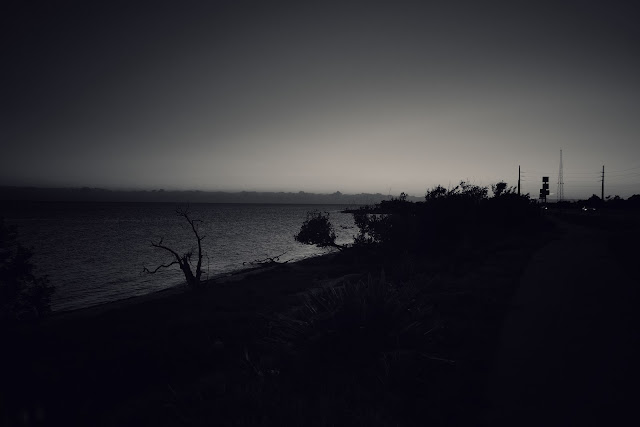 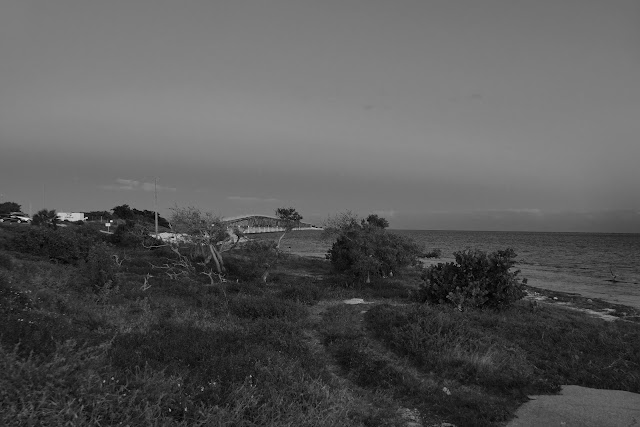 I hope these pictures express some part of that.
Posted by Conchscooter at 12:00 AM 4 comments: