The portents were not good on Thursday morning. Skies were grey and blustrous and there was no internet or cellphone service in the Lower Keys. I am a Modern Man, like it or not and I was disconcerted by the uselessness of my telephone, but nothing daunted I threw the dog in the van and set off on Highway One northbound with nothing but a paper map, a happy dog and my native good sense. I should say that even though I keep a road atlas above the driver's seat of the Promaster i can navigate much of South Florida with nothing more than my eyes. I was aiming for exit 69 on the Turnpike, traveling east two blocks and turning right toward Window Tint USA. Pretty simple three hour drive really. Portents be damned. 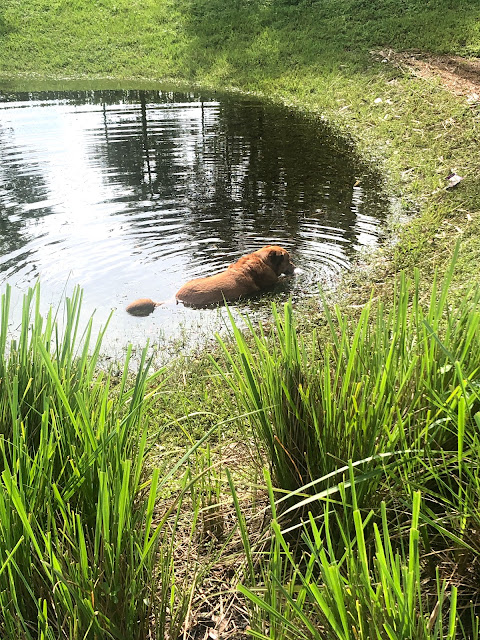 Cell service returned by Lower Matecumbe and was at full strength in Islamorada where apparently a waste truck had clipped some critical lines of communication throwing all the Keys south of Mile Marker 80 into communications blackout. It happens and more often than not thanks to human deficiencies not the weather. I arrive three and a half hours after leaving home so I had an hour in hand and we went for a walk. Whereupon Rusty took a seat in a retention pond full of rainwater, a pale imitation of his accident later in the day. I had noticed a nearby oil change shop with a  high roof (the Promaster is almost ten feet tall) and we drove over there, wet dog and I. I had to wait 15 minutes for an oi waste truck to empty their tanks, so once again a  waste disposal truck crossed my path...which in this case was good as I sat in the back at the table and ate my sandwich and soda like a civilized human being traveling in his mobile home. Rusty kept watch: 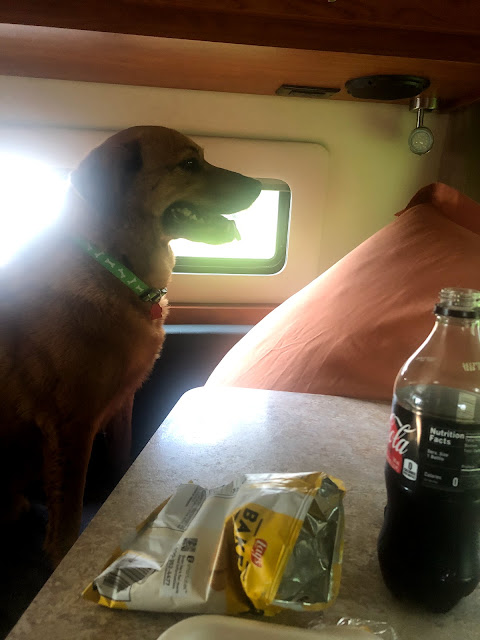 Window Tint USA does window tinting but that was not my goal. I had planned to come up Monday but Hurricane Eta got in the way so Thursday afternoon was the back up plan. I was going to pay them $400 to cover the vast great windshield of the van in something called Clearplex, which the shop owner told me he usually puts on the windshields of exotic sports cars. Apparently 200 mile per hour can do bad things to vehicle glass when it meets a pebble. My idea was to put the plastic film on the Promaster to protect the windshield on any gravel roads we might travel. It has the added benefit of being waxed to help rain run off and it keeps UV rays off the occupants. My cup runneth over! 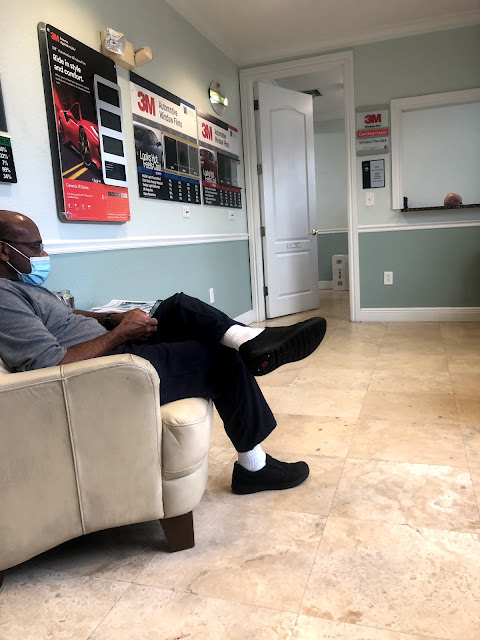 However the film application takes about four hours so rusty and I were carless and homeless and footloose on a  rainy afternoon. Very kindly they offered us the use of a car but I was loath to put dog hairs in it for no useful purpose so we set off on foot as the van was swallowed by the workshop. It was not actually rainy to start with as you can see below, but it got that way. I took the camera and the umbrella with me as a precaution. Just as well I did too. 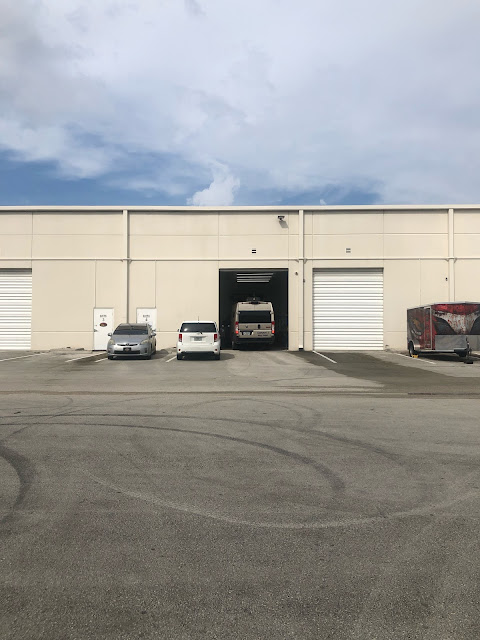 I found a canal running along the rear of the business park, separating our paved parking lot from another ... paved over parking lot! Rusty scampered ahead and I followed. I had managed to twist my ankle last week stepping off the road in the dark (out with Rusty again!! His fault) and I was limping a bit so I was glad to be off leash and able to pick my way. 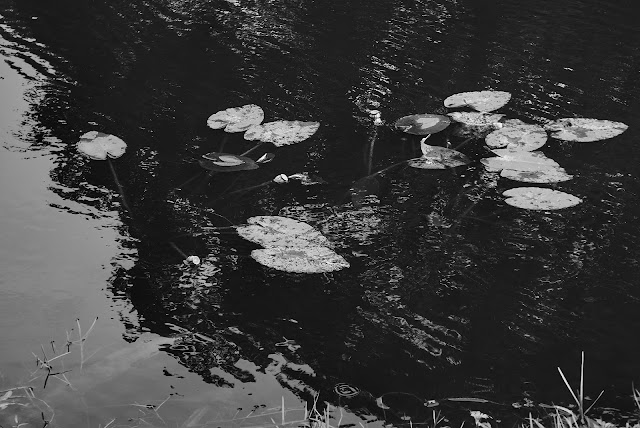 In the least promising of places I look for things and try to see things. 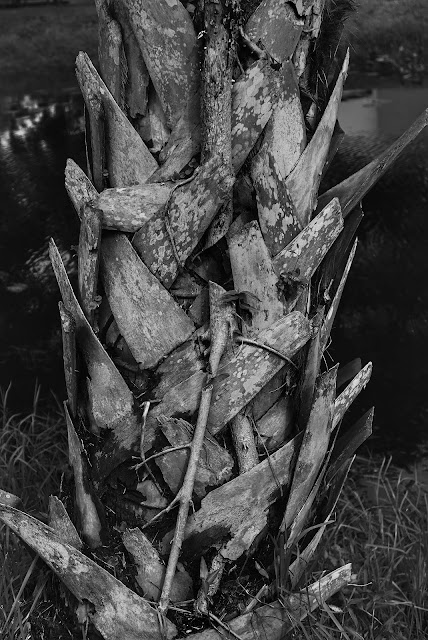 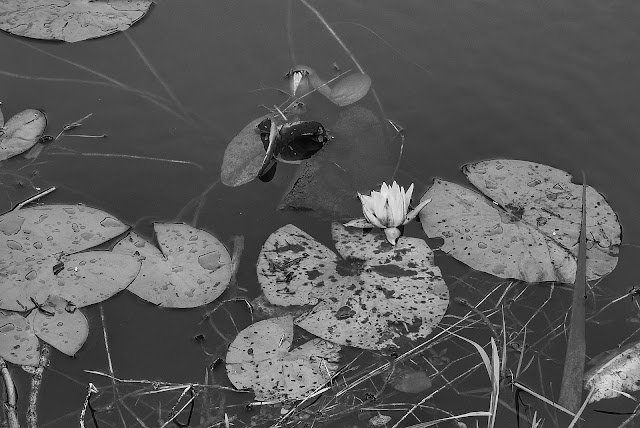 I have no idea who or why someone put a decoy in the canal but there it bobs apparently interested in a  leaf the same color as its backside. 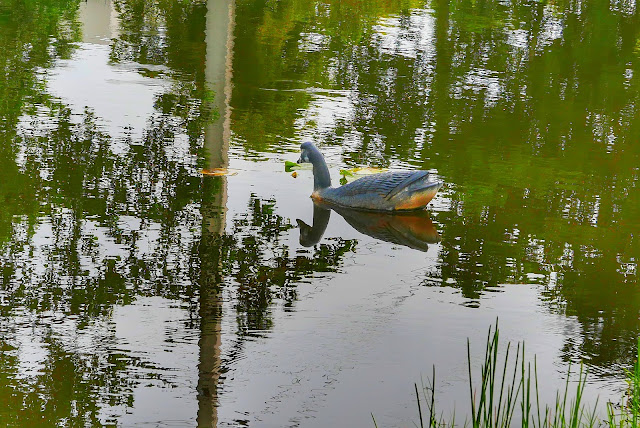 Not a charming vista but I thought in black and white it had a certain austere 20th century industrial look. I have noticed that in old photos that show up on my Instagram trash was everywhere in the years of my childhood. It takes looking back to understand how far we have come. Except here: 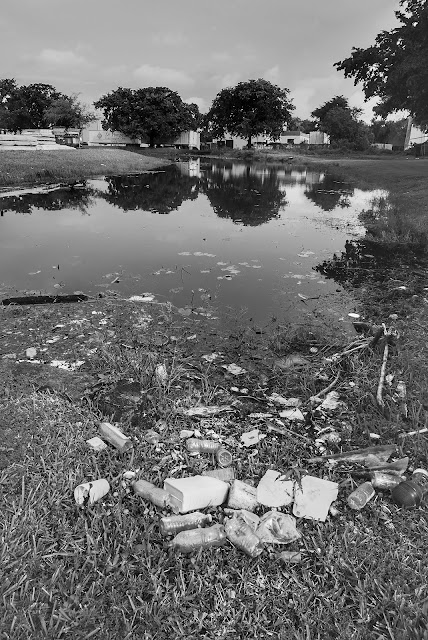 Off to the side I could make the scene more pastoral. We are wedged between the Turnpike and I-95 here, just off Sample Road. It doesn't get more urban in South Florida. 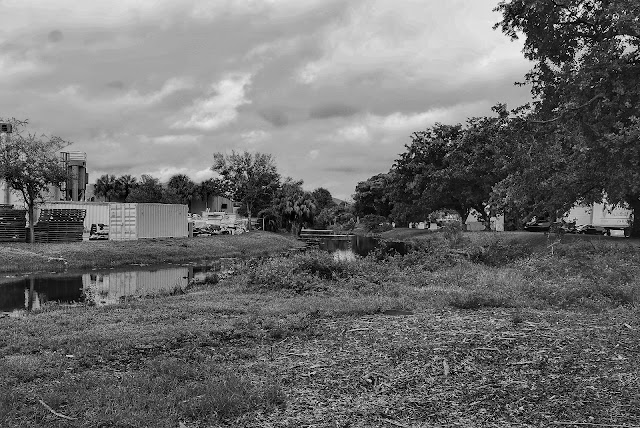 While I was admiring my skill at masking reality with the camera Rusty got too bold and toppled off a low cement seawall at the end of the canal. With a loud plop! in he went. As you can see my non swimming dog got the basics sorted out in a hurry. He was so panicked he ignored my instructions to swim for the closest patch of grass. Instead he found an underwater ledge and before I could step forward and help him by grabbing his leash he had scrambled up the vertical surface unassisted. I don't suppose I should have laughed as loud and as hard as I did  but his dignity was offended and he scampered away from the canal before it snagged him again.  I had nothing to wash or dry him so I must suppose the water was cleaner than it may have at first looked. Environmental regulations worked in his favor! 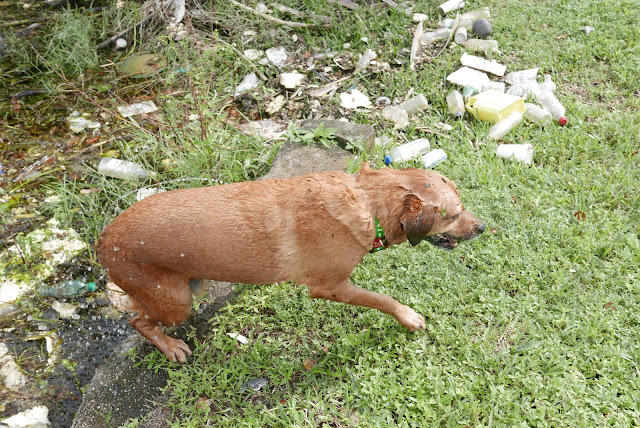 We found a quiet spot where I could sit on cement and read my Kindle (Kitchen Confidential by Anthony Bourdain, a scatological but overdue read for me) and he could catch his breath and dry off. 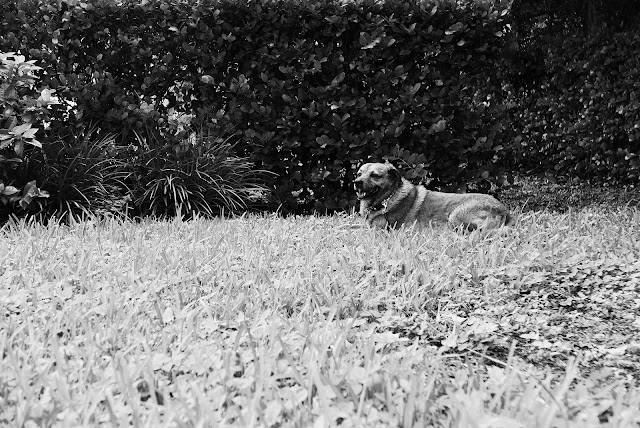 That was when the rain started and it did not stop. It came down in buckets which was as close as Rusty got to a rinse and he was pretty well cleaned off by the rain. We huddled in a doorway of a disused office sharing the umbrella to keep stray drops off us and we waited. Stray dog memories doubtless came back to him as we waited for the van to be finished at the appointed hour. I don't like to bring my dog into people's businesses especially when they know I have a dog and they aren't welcoming. This guy was not a dog lover but he was okay with Rusty in his office while I paid the bill. I just figured a luxury car tinting place may not be suitable for a wet stray and his equally wet dog. I probably should have  overridden my scruples and taken an armchair but we did fine sitting on the neighboring doormat and reading and snoozing for an hour. 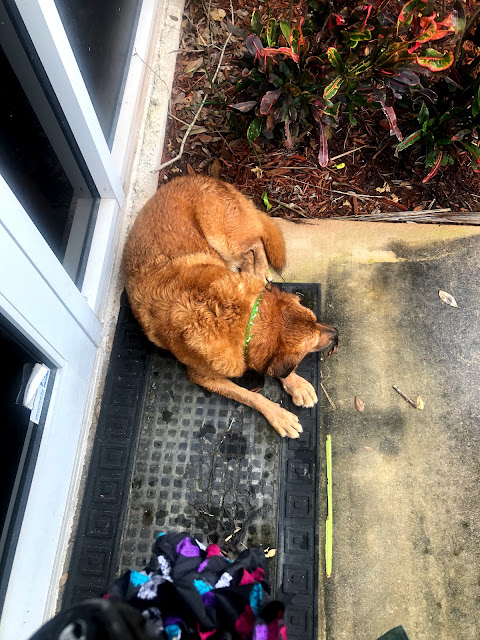 From there, as dusk fell we went up the street to Costco where I bought a bunch of cold stuff that I shoved in the refrigerator of the van which my wife had turned on the day before. I had my second sandwich in the parking lot while Rusty rolled in the grass then we left Costco and drove home,  Three hours through more heavy rain and Rusty was hopping up the stairs to make sure his favorite bed was where he left it. I tramped up behind hauling bags of Costco Stuff. 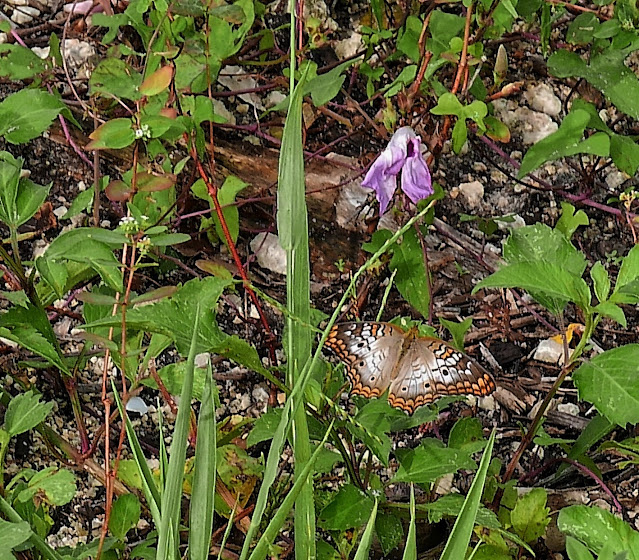 Many people who live in the Keys hate road trips and driving and highways, but I am as usual in the minority and I don't mind making a drive up to Miami to get something done.  Really you just have to get used to it if you are going to live in an isolated place and complaining doesn't do you much good. Luckily I work twelve hour shifts so I get weekdays off at random and I can thus use days off to fit in my private errands. Speaking of which next February I am planning to go overnight to Jacksonville to have a front winch installed on the van. That one should take an overnight to accomplish but after that I will be able to pull the van out of soft sand all by itself when we go exploring deserted South American beaches. Meanwhile back to work, less dreaming, this stuff has to be paid for.
Posted by Conchscooter at 12:00 AM 4 comments: