I am very relieved we are not Puerto Rico or the Virgin Islands, from whom nothing much is heard anymore. I did read that on St Johns they still have no electricity at all.This is Florida and be it ever so tenuous we are connected to the mainland. Yet this, after six weeks is how my street looks: 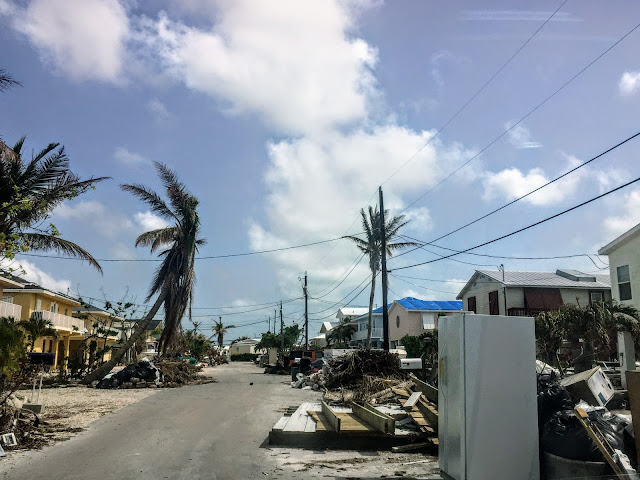 I have electricity, internet and air conditioning and running potable water from the faucet. Fantastic! My driveway is clear, my street is a mess. We call it Beirut-by-the-Sea, a jumble of trash, broken homes, wreckage and and rat infested piles of debris worthy of a civil war. The main road that connects our subdivision to the Highway is called Spanish Main, and here they pick up some trash and pour more in it's place: 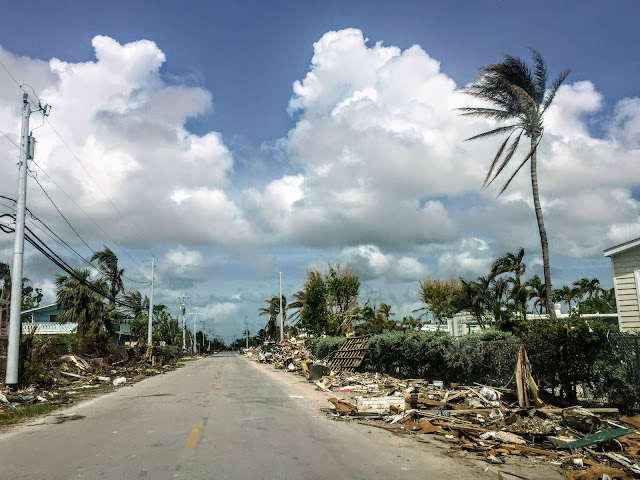 US One, the Overseas Highway shown below as I was driving into Summerland Key is a mess. The trucks hauling wreckage spill stuff as they go and you are as likely as not to come across bits of RV parts, appliances, sheet metal wood and tree limbs as you go on the main road. Riding at night requires total alertness, even more than by day. 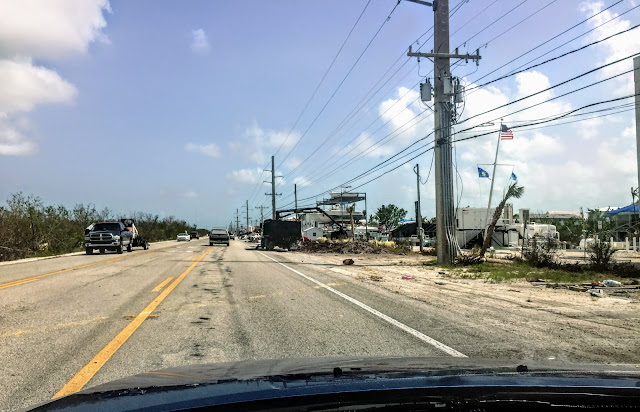 What makes it all so bizarre is that there is a three way public argument between the Florida Department of Transportation, responsible for highway debris, the county contractor responsible for side streets and the county. The state stays aloof and does its job meanwhile the county contractor can't get the required 200 trucks to clean the sub divisions along this hundred mile mess. He says FDOT pays too much and he can't compete with the state pay scale. He has but 78 trucks working. None have showed up on my corner of Cudjoe Key. 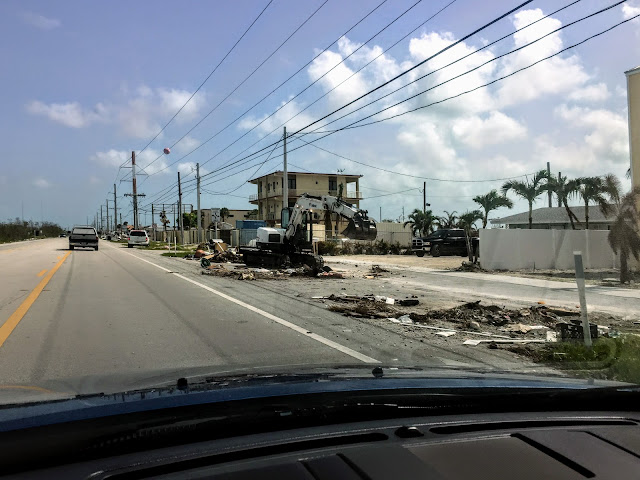 Imagine: this debris field stretches more or less from Mile Marker Ten a hundred miles north to Key Largo. In the newspaper county officials say they have removed 400,000 cubic yards of wreckage, as much as was generated by the hated Hurricane Wilma and its floods in 2005. They estimated there are 2 million cubic yards to clear this time around-  five times as much. And the county contract says my street should be clean by next weekend...No chance. 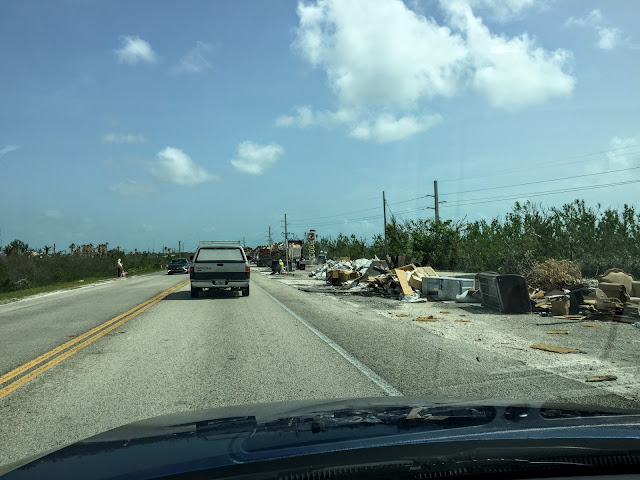 It just doesn't end. there's always something going wrong. There are no working gas stations on Summerland or Ramrod and only one in Big Pine. Think about this: cable television has been absent from much of the Keys since the storm. My neighbors got their first technician visit from Comcast last Saturday. We've had AT&T internet in my house for three weeks (we watch streaming TV) so we are lucky. Things just aren't getting done in some areas and as much as we cannot blame we cannot feel good about this chaos. I have seen societal collapse and I did not like it. Losing water, electricity, phone and medical services, fire protection and law enforcement all at once was  a lot to handle. 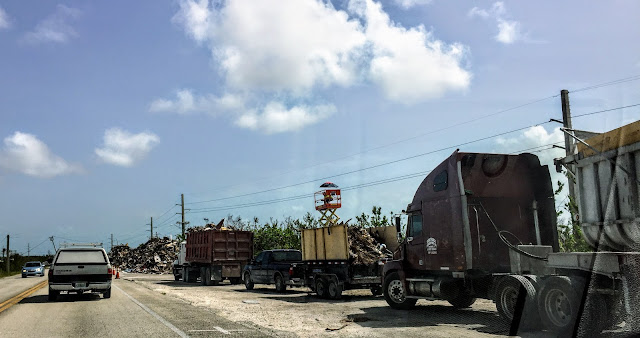 This Mount Trashmore on Ramrod Key is the scene of multiple trucks and excavators loading up every single day but the pile never shrinks. There's a bigger one at Summerland Key and a vast such pile in Marathon. It's endless. We have to give up the pretense that this lot will be cleared in anything less than months. Meanwhile it rains and smells mature. 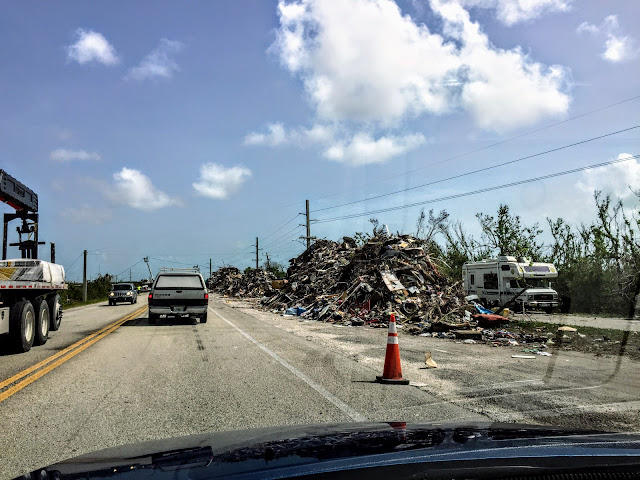 I am not one of those who cares if people come by to photograph our misery though I have seen posts on Facebook protesting disaster tourists as though they should refrain. I understand the fascination but I would like amateur photojournalists either to not slow down or pull completely out of the way as they photograph our precious trash piles. I am so used to driving past wrecked homes and exploded RV trailers and piles of garbage I barely notice them. But I do notice people slowing me down as they crawl by fascinated by the detritus of lives upended by a Category Four storm. 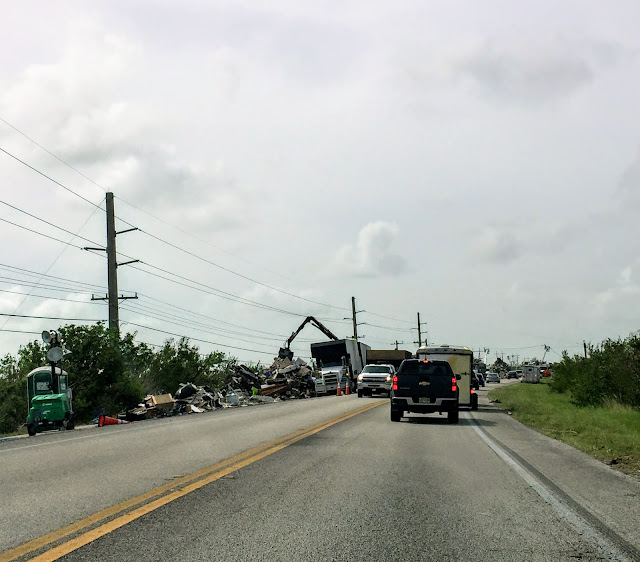 There's plenty of crap to stare at too. And I'm not showing the houses torn apart, the subdivisions submerged in mud. Here is the refuse of all that destruction. This trash represents workers who can no longer live in the Keys and do their work. People living in FEMA hotels kicked out to make way for better paying tourists. 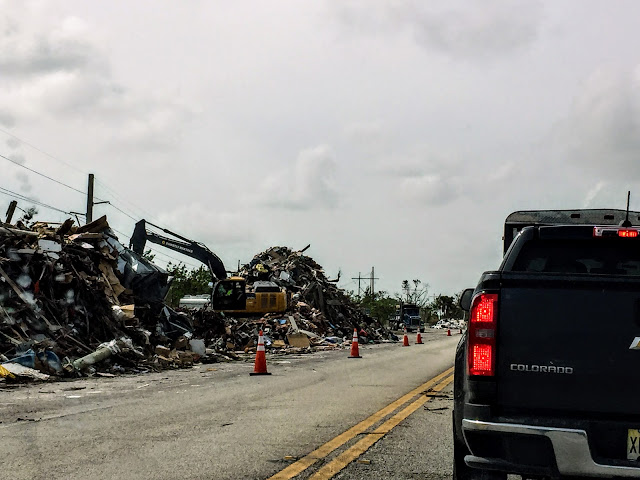 They say flying the flag upside down is a symbol of distress. Well, we have lots of streets signs doing the same thing. I hope someone with authority to do something notices. 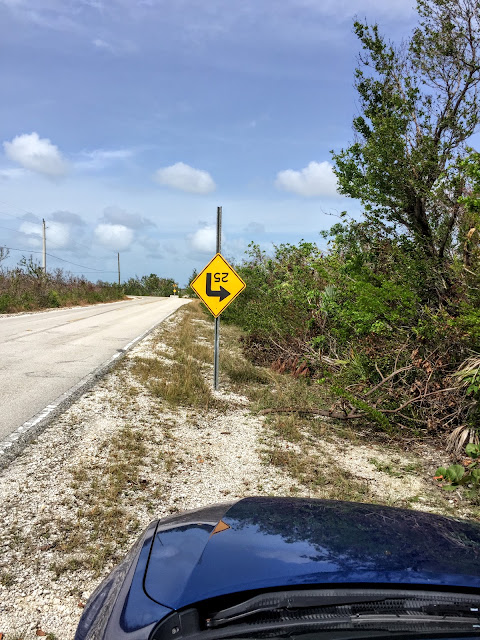 FEMA trailers, expedited housing permits, and those tourist dollars we crave being spent to rebuild our local small businesses. That would be nice.
Posted by Conchscooter at 12:00 AM No comments: Links to this post