Thew newspaper says the developers of the funky little hostel known as the Seashell on South Street may be around for a few months more as it's replacement is taking its time getting off the design board. So much the better as far as I'm concerned as Key West can still use a few lower priced places to stay. 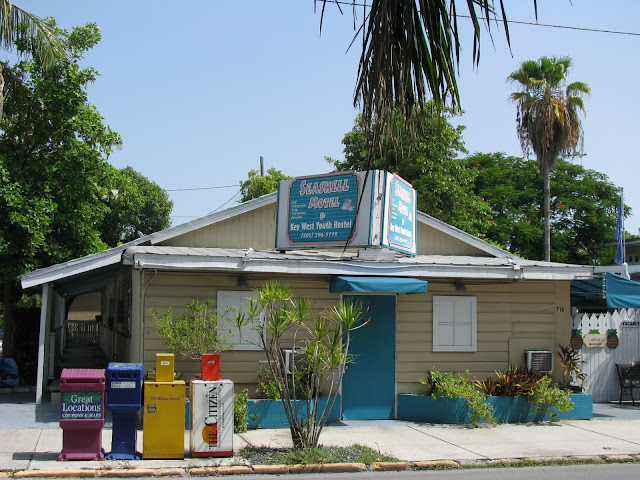 But of course a developer's life is never done so we find out now that some two dozen people living on their boats in Oceanside Marina on Stock Island are getting the boot. Liveaboards as they are known are favored in some marinas and hated in others and thus are banned. The argument in favor is that people living on their boats give life to the sterile docks and act as eyes and ears to protect the property 24 hours a day. Opponents say they clutter up the docks with their overflow belongings and tax the facilities like the showers and toilets and so forth. Also the unstated objection is they are scruffy sailors and bring down the tone for the gold plated fishing and motor boat weekend hobbyists.

So with plans to add a hotel to the already established condos developer Singh has decided living on your boat is out. A few weeks from now they will be gone and gentrification on Stock Island takes another step forward. The state legislature is also moving to outlaw anchoring permanently in certain favored spots. The Federal government is responsible for navigation which cannot be banned but camping on the water is going to get tricky as time passes.  And as anyone will tell you lots of Key West's low income workers live on the fringes in boats or in trailer parks. Both sources of housing are threatened on Stock Island as upscale comes to Key West's  suburb.

I think the problem lies not just in the insatiable need for more generated by bored developers who need challenges (not necessarily money) and its just too bad our culture doesn't value development of housing for poor people as a noble endeavor. The Chamber of Commerce, the business people's union, has made that very clear with negative comments about wage levels in Key West already. Nobody is going to sing Pritam Singh's praises for duplicating Ed Swift's low income housing at Meridian West. And it's too bad because Key West is pretty much full with a few new high end developments coming, Conchs hunkered down in New Town and holding onto their piece of Paradise while wealthy outsiders barter increasingly outlandish prices for small homes in Old Town and then wonder why service sucks in their winter home. It's because wages are low and housing is awful: 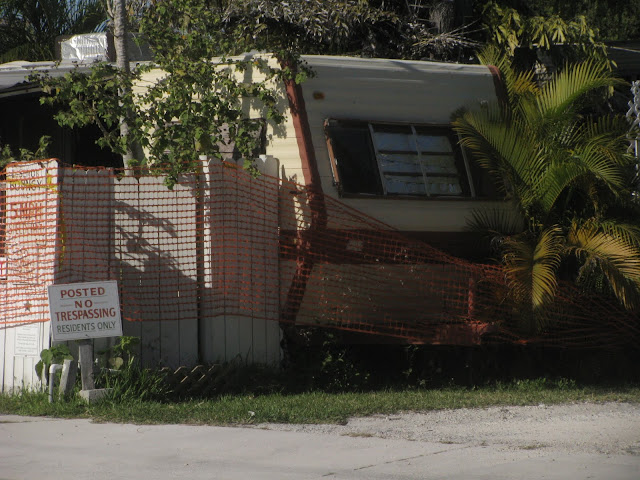 I tried to explain to one transplant how the system works but she stubbornly told me she understood while expressing frustration with the weird way things work at her new job. I am sympathetic, I really am, but you only grasp the essential madness of working for a living in Key West when you understand that no one expects you to still be in the job in six months time. Most people give up, exhausted by the lack of common courtesy in the workplace, tired of bosses expecting the one soul who shows up on time regularly to take up all the slack, sleepy from too many jobs and too high a cost of living. Only a resilient few stick it out so you have to prove to your colleagues that you are one of the few and until then you are essentially a ghost. The notion of commuting by bicycle year round is alluring but everything else about working in Paradise sucks. 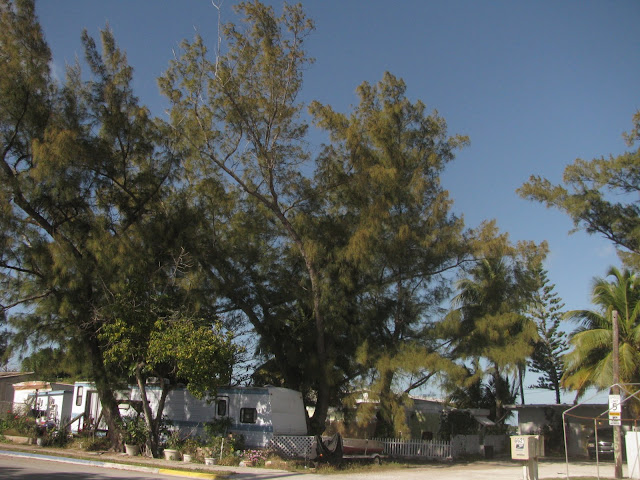 I am lucky in that my job pays a living wage with great hours (for me, I love night shift) and superb benefits and bosses that appreciate me, so I can say working in Key West is great. But for a lot of people working with grumpy stand offish colleagues, getting paid half what they made Up North and living in a trailer does not add up to much. And now the living conditions here are taking another spiral south with the departure soon of the "The Fun Island," as gentrification continues in Marathon, second city in the Keys at Mile Marker 50. 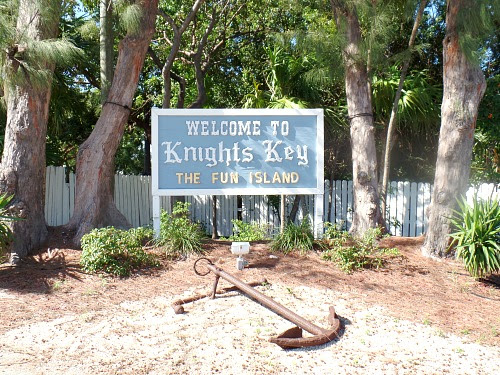 These pictures I got online as I have never had reason to visit the trailer park but it's there just south of the Highway at the entrance to the Seven Mile Bridge and soon it will be gone. Oh well get used to "improvements" here as well thanks to the indefatigable Singh. 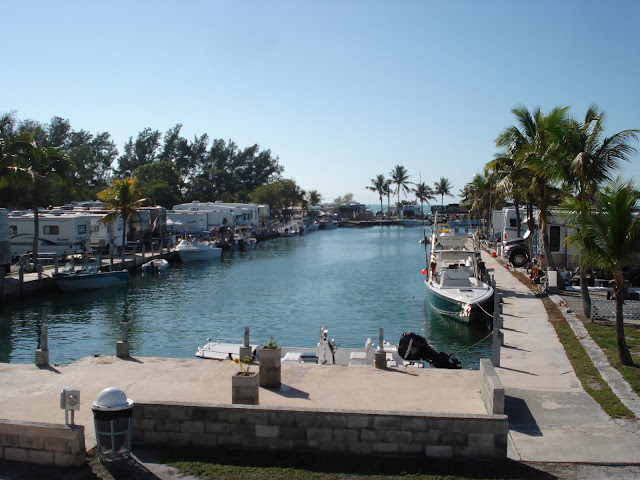 He it was brought Tranquility Bay to Marathon and now there are two name brand chain motels doing fire sale business in Marathon, with apparently more upscale building to come. Just like this no doubt "in the Key West style..." However Tranquility Bay pictured below, like Truman Annex or Parrot Bay in Key West is only the Key West style from the exterior shots. What gave Key West style was something entirely different, they were people who marched unmolested to the tune of their own drummers. Not angry people or fearful people, but frequently they were people damaged by life Up North who too refuge at the end of the road, and the Southernmost City made room for them. They drank and partied and made a living and lived with marginal material goods in homes no one else wanted. They were outcasts happy in their marginal lives and now they are gone for the most part and those of us who were happier in their orbit than in the orbit of the thoughtless rich find ourselves suspended between a past we were not damaged enough to participate in, and a future we want no part of. Even if we could afford it. 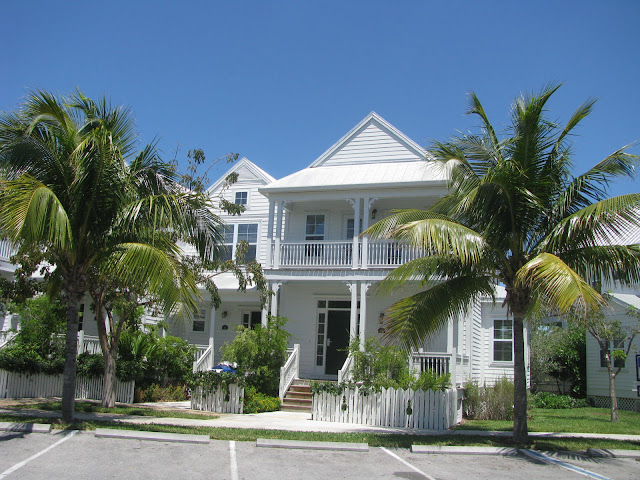 I keep hoping something will stop the inevitable march into the Stepford future that looms large and I have time to sit on the sidelines and watch and hope. But were I to win the lottery, even if I played it, the future mapped out for Key West and the Lower Keys involves fewer cookie ladies and more name brand dressers from lives spent earnestly Up North.

Consider this interesting list of 20 cool small towns around the US. The list is rather more dynamic than you might expect as its for younger people rather than the dullards who read Forbes but it becomes clear a few towns into the list why Key West won't come close to qualifying: ecology, industry, education, are substituted for with an urban vision that encompasses more modern concepts than unfocused mass tourism and the wealthy at any price. Check out the list:

My future Key West when I am an old geezer will need innovative energy solutions, clever affordable housing in a  climate where tiny homes would work nicely, and locally grown art and literate people with lifestyle dictated by something other than fashion. It's possible even if our current crop of urban weed wackers have no clue at the moment.