A Wasp Around Town

I have been  working out for the past  16  months on a regimen of three or four hours  a week at an exercise studio that really works well for me. Broga (LINK) is some faddish mixture of yoga and strength training for men and women are welcome and Sean the trainer has kept me at it for months much to my own surprise. Then on alternating days we pull our weight up and down using straps on the walls (TRX LINK). Yes so I have something in common with Navy Seals. Call me shocked. This picture with the tunnel of light exemplifies my physical exhaustion at the end of each hour. I am surprised I am alive and not quite sure if that's a fact. 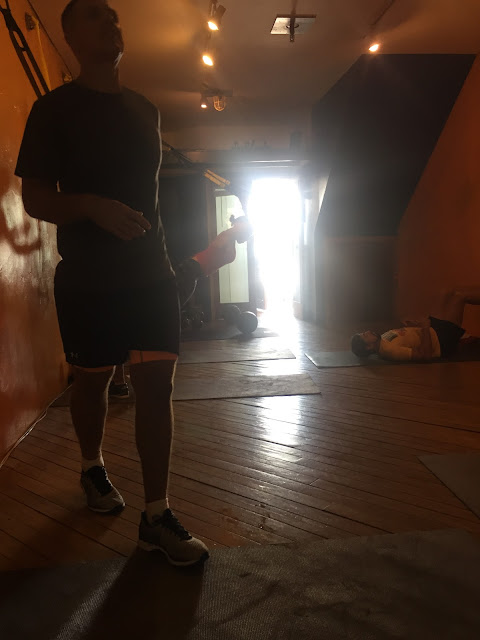 It is hard, incredibly hard and I come out of one solid hour of no stopping, no pausing constant effort drenched in sweat as though I had been swimming in my clothes. Yet I go back to the studio on Truman Avenue right across from Bare Assets because this stuff works. I am stronger and the intensity keeps building so I am constantly making even greater efforts to keep the repetitions going. Sean is an astonishing trainer, I've never met anyone quite like him. 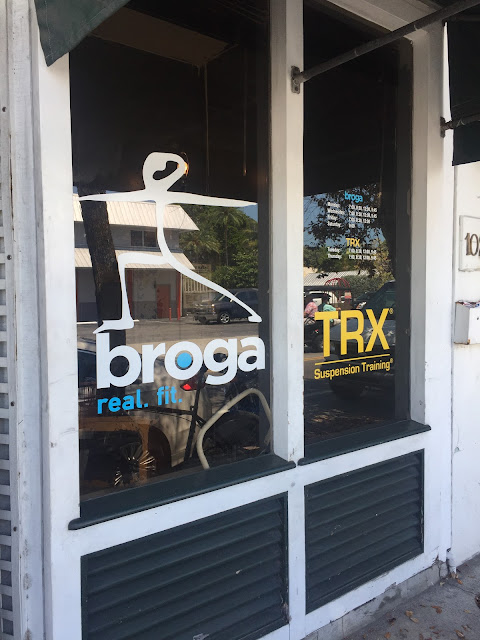 He lives a spartan regime as you might imagine, of smoothies and copious quantities of running and assorted exercises. Me - hell no!  I came out of calls and I needed fizzy carbonated caramel water. Caffeine for the love of God! So I went to Dions at White Street and staggered (no exaggeration) into the shop. I have no idea what they expect customers to shop up wearing but a t-shirt and shorts sopping wet you'd think would raise eyebrows. Not a bit of it. I got in line behind in the lottery hopefuls and upon presenting my coolish bottle was asked to cough up $1.93. Two bucks for caramel caffeine with fizz! Bloody hell, can this be right? I sat in the shade where the bums usually hang out and drank my life saving fizzy. 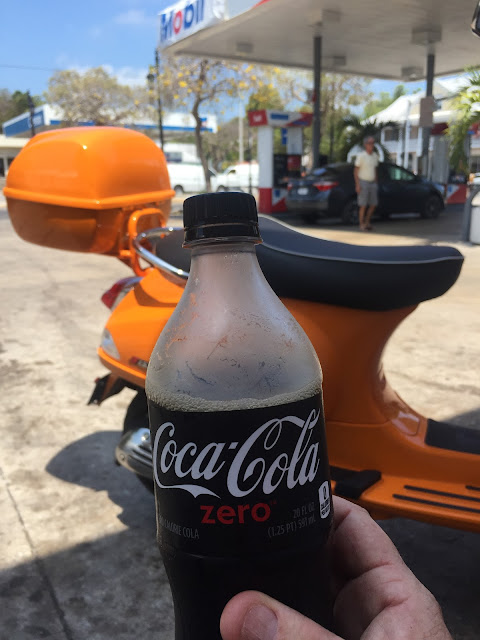 It was  a moment to take a breath and watch the world go by. I am reminded this is where I don't stick out like a sore thumb even drenched in sweat. Ride a scooter? No problem. It is a different world down here and that's a shame because everyone should get to live judgement-free. No ? 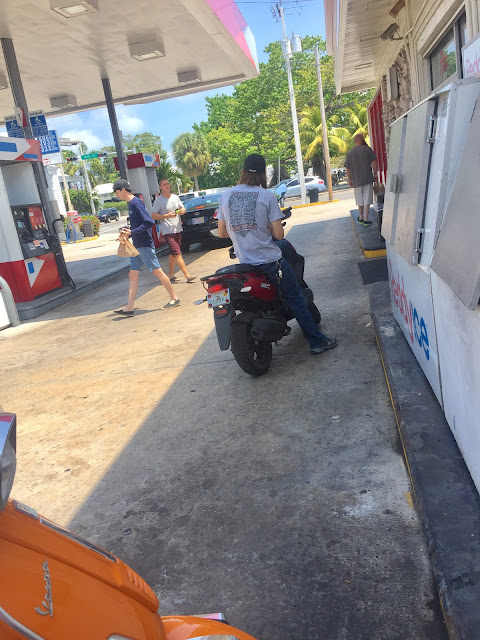 I followed this guy for several blocks across Old Town. His ice chest indicates he is most likely a delivery employee for a restaurant  and he wore a t-shirt from a place downtown so that made sense. I could not believe his riding style with feet dragging. I tried it and my gentleman's vegetables made a pained protest so I pout my own feet back on the floorboards. He wobbled round corners hitting the curb with his trailing foot and when he had to dodge a car that crossed his path he nearly fell off  the scooter as he tried to lean to one side with his feet splayed like a cartoon character. I admired his guts riding like that: 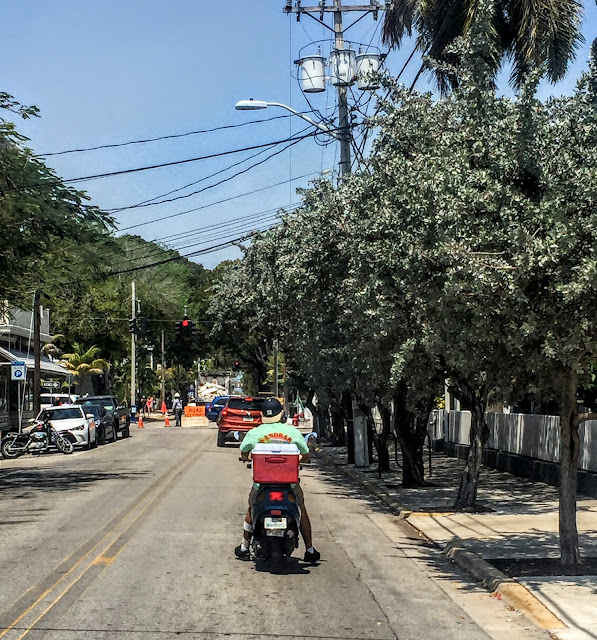 Riding out of town I took a second to get a picture of this average human doing her chores by scooter, in a  dress with heels and attracting not a second glance. As it should be. 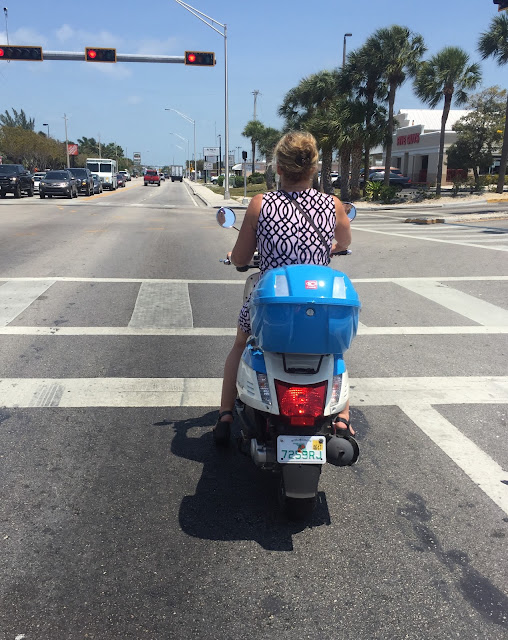 The other day I cracked myself up on Flagler riding into town (more broga) on the ET4 Vespa (which is Italian for wasp), and there we were, three strangers on scooters. I laughed into my helmet, three old white men on mopeds in a line at a traffic light. Most natural thing in the world in Key West. I love it. 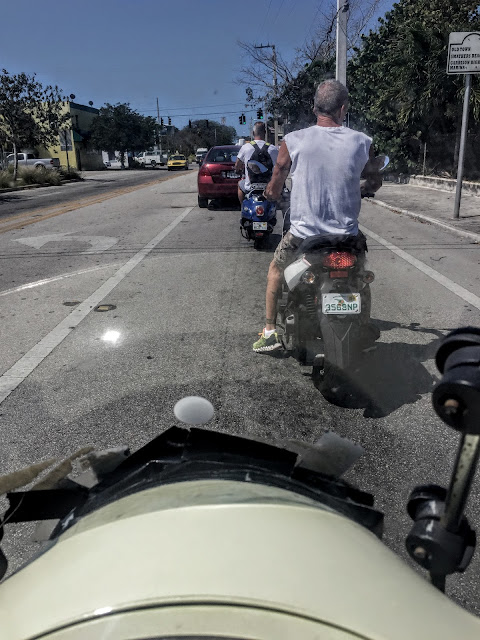 A funny thing happened on my way into work a couple of nights ago. I was on Stock Island and an SUV came alongside and wound down the windows. "That a Vespa 250?" the young Latino driver and his passenger yelled at me. No I said it's a Vespa 150. "60 miles an hour," he said incredulous...But the light had changed and I had places to be people to see. It takes  seeing to believe that these little buzz bombs have the capability to get you places. It's great fun surprising other road users with a "moped" that cruises happily at 60 miles an hour. And then blends in with the around town 50cc scooters outside Publix. 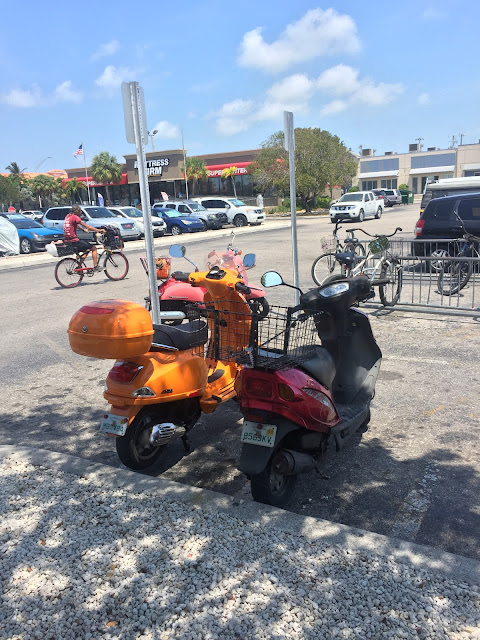 Back home Rusty  the walking dog was ready to take a quick ride in the car to his wilderness walk but it was a hot. Summer is here and you can tell the temperatures have moved out of the winter range into the higher humidity of summer. The sun is higher in the sky and the light is no longer white and flat as it is in winter.  The cool breezes are still blowing through the islands but summer is here and here to stay for the next eight months. I'm ready. 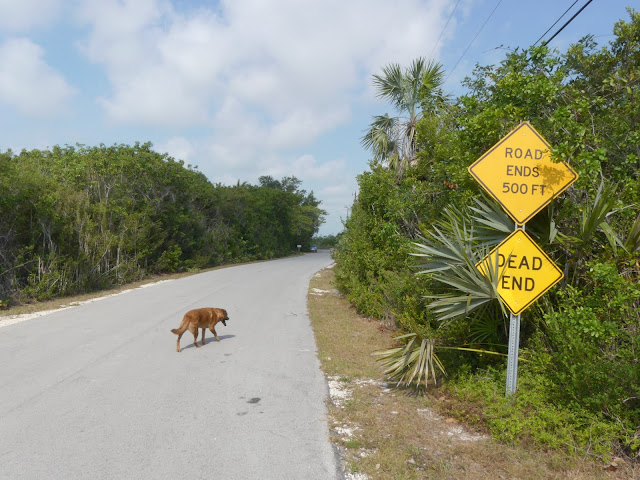