The paper had reported recently that recycling rates in the Keys had shot up from seven percent to 27 percent. Which number must be Keys wide because a more recent article mentioned a rate in the city of Key West of barely ten percent. There seems to be a culture of willful turning away in Key West sometimes that makes it seem as though connections with the outside world are as tenuous as they may have been in 1828 when the newly founded city depended on the shipping trade for word of trends and tastes across the waters. I read the city of Madison, Wisconsin's Recyclopedia and I was astonished: Wisconsinland: Study It I was astonished by the tedious nature of it, but also by the embarrassing lack of education on the subject in the Southernmost City. 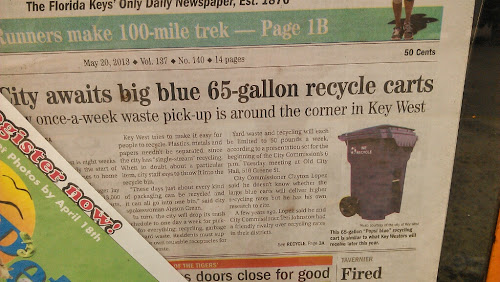 The city has made half hearted efforts to get people to recycle and some public recycling bins have appeared around town but it turns out the big obstacle to recycling is the color of the bins. I kid you not. Trash cans are green, thus: 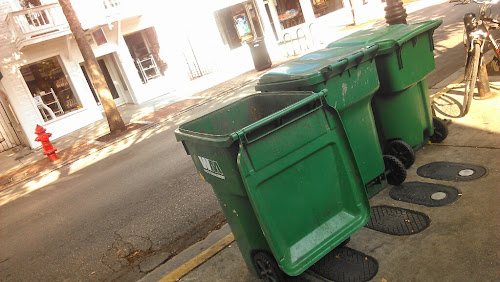 Household recycling bins have yellow lids and the newspaper quotes city Commissioner Clayton Lopez as a brave pioneer in accepting and using these yellow-topped bins to recycle his household waste. The new bins we are promised, will be blue. Well that's a relief I'm sure. 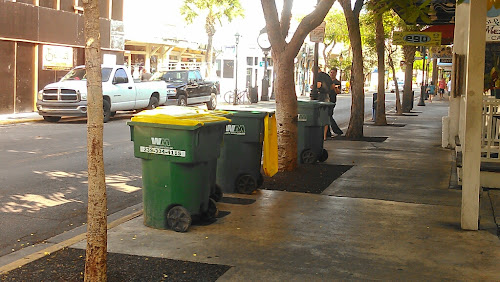 The real insurmountable problem is a lack of education on the part of leaders and a lack of interest on the part of followers. Single stream recycling it's called but it doesn't necessarily mean mixing recyclables and food. Take a look in any recycle bin and see how little the concept is understood. Does this mess below count as part of the ten percent? 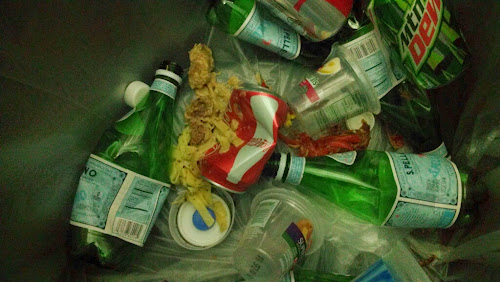 My understanding is that plastic bags gum up the recycling machines and should be put in the trash. Also bagging slows the ultimate separation of recyclables. None of this poses a problem to people in Key West who throw whatever in whatever recycling bin and call it good and give themselves the wrm fuzzier for doing their bit. Some radicals argue recycling does nothing to reverse the wasteful over use of natural resources and it's just a feel good program for wasteful consumers. Who am I to argue? I don't know the intricacies of the issue but it seems to me we have to start somewhere and recycling should be the first step on a long path toward more mindful use of the natural treasures of our only habitable and therefore exploitable planet we call home. For some people it's all or nothing; I am not one of those. 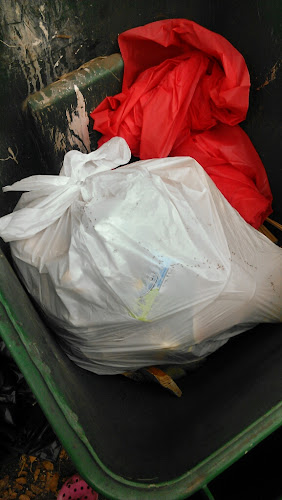 The city has even put out public recycling bins around town, and that's a step in the right direction. However if they came with instructions it would be better for recyclers of good will. I don't know of any recycling program that accepts pillows, in Seattle or Madison they might disown me for such ignorance but in the Keys we are still struggling with the concept of proper recycling being a common good. A few years ago an entrepreneur tested a bottle crushing recycler for bars and restaurants, the major sources of reusable glass in the city. All the employee had to do was drop a bottle in the $5,000 machine which would crush it to powder reducing space consumed by empty bottles and putting the powder back into circulation as a potential future bottle. Brilliant, no? Rejected of course by Key West bars that happily fill the city with empty smelly bottles by the thousand. That rejection has led the lazy and uncommitted to argue that recycling their modest twelve packs is a wate of time. Fair enough I suppose, yet I would privately hope for better from my neighbors. Where we lead the bars and City Commissioner Mark Rossi will eventually follow. He owns the ten bars inside the Rick's complex and has about as much commitment to sustainability as anyone in authority in this city. He should be out front, for this city has done him proud over the years. 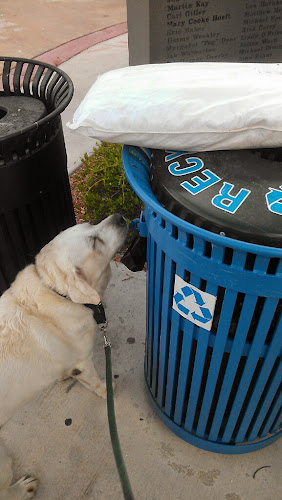 Let's face it, drunks drinking on the streets will have grave difficulty recycling. We can find them having difficulty controlling their bladders on city streets and people's yards so what to do with their bottles and cans will likely be beyond them. So our public recycling containers end up looking like this: 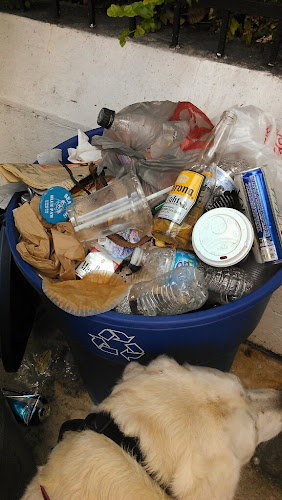 Some people prefer to put their household surplus on the streets, often the subject of my photos, which could be construed as art or recycling I suppose, yet... 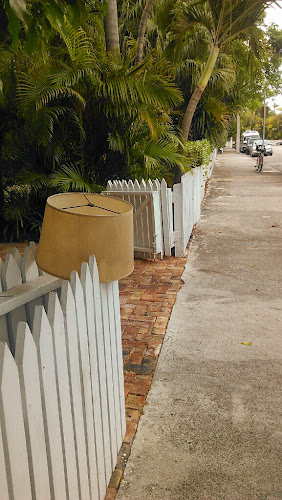 ...in this town so close to our struggling oceans, to North America's only still living reef, a town likely to be drowned by climate change or whipped to matchsticks by hurricanes of increasing severity it seems odd to me that something as simple, as fundamental as basic as recycling, is simply out of reach. When I lived in Northern California I never felt up to snuff, I always felt a little behind the politically correct curve whether it was on foreign policy, feminism or the waste stream. In Key West some days I feel like a positive pioneer, far out ahead of the field. And that thought saddens me, as I know I don't know much. 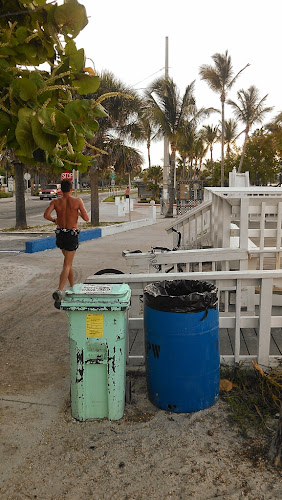 I clean my containers, cut up my cardboard and keep any styrofoam (they still sell coffee in unrecyclable styrofoam ferchrissakes in Key West!) and plastic bags out of the boxes I use. I don't even find it that hard or taxing, but I've been doing it for years. Thirty years ago I remember a friend telling me about eccentric New Zealanders required to clean and crush cans before committing them to the waste stream. How odd I thought! Never imagining it would fall to me to do the same. I was also sceptical when a well meaning friend told me aerosols destroyed the atmosphere, but that too came to pass and be changed. Perhaps one day leaders around here will remember their grandchildren and act to do what's right, what may help, what may require discipline and thought in a culture devoted to neither, at least superficially. 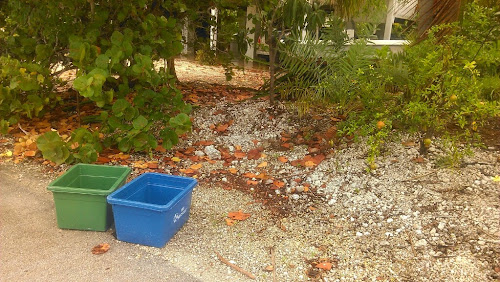 Years ago while visiting a Key West friend I remarked on the trash In the bushes and the gutters when I lived in a town even then devoted to private recycling plans in the community. Oh he said, this is a transient town filled with tourists and no one has a commitment. Wrong I thought at the time and still do. Yet that belief butts up against a community dedicated to not just not recycling, but screwing up the little we do have that tries to work in that direction. If it's proper place is in doubt, toss it in the trash and leave recycling to the odd few of us who want to give recycling a proper chance. 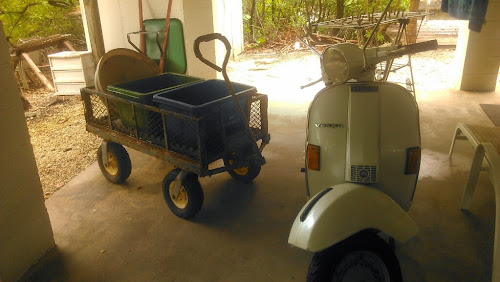 This is the week my 34 year old Vespa goes to Pennsylvania to be "recycled" and restored into a re-creation of my youth. Thanks to my wife for supporting this endeavor that ended up costing more than it's worth. This fall I hope to commute on my P200 and as I ride I shall think of it as the ultimate and most fun expression of the reduce, reuse, recycle ethic of the 21st century. Well, a little bullshit is allowed surely isn't it? I'll ride my elderly two stroke 230 pound lump of metal at 65 miles per gallon and call it recycled alongside the brand new SUVs and massive pick ups that sport bumper stickers advocating "energy independence." In the end we do what we want and damn the consequences, let's be honest.