A friend of mine came to Key West from New Jersey and had a hole in his life for many years. Then DJ's Clam Shack opened on Duval where the Middle Eastern falafel joint used to be. He told me that at long last Key West had a place where you could buy a proper lobster roll. D J's Clam Shack on Duval doesn't have a huge Menu but it's interesting because it's unusual for around here. 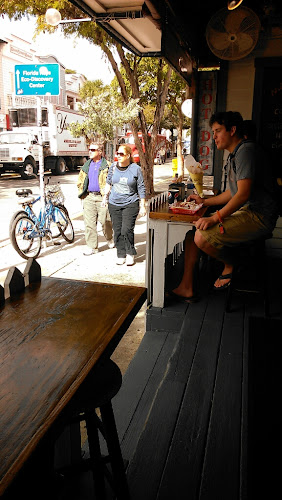 What, I asked naively, is a lobster roll? He rolled his eyes at my hopeless ignorance. Is it my fault I grew to maturity as an adult in California, and East Coast delicacies passed me by? I am told Maine makes lobster rolls as a state institution such that McDonalds in Maine sells them as part of their local menu. 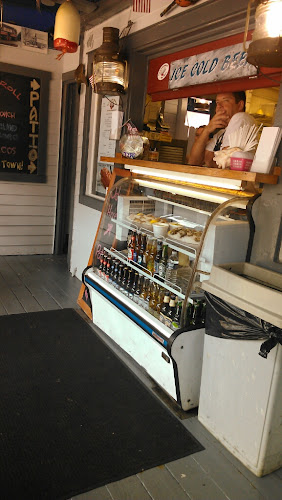 D J's has Yuengling on draft which is a good sign but I can't drink in the middle of the day else I pass out, so I settled on a soda. The food? Well that had to be a lobster roll for a first visit. What, I asked the rather bored dude behind the tiny counter, are Ipswich clams, thinking of their namesake place in eastern England. They are specially flown in from Massachusetts so they can be fried he said. The clams on display he added were regular clams, the ones I like in broth or on pasta. Clams fried? Weird. I'll try the Ipswich model next time. 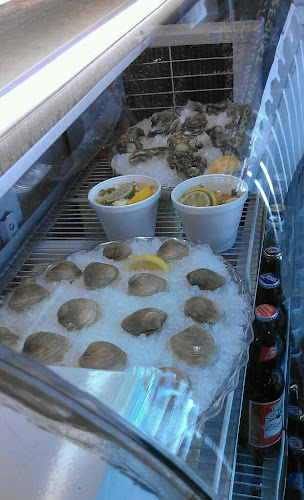 My lobster roll showed up in short order and I took a seat overlooking the nine hundred block of Duval. Hmm, cold lobster chunks in mayonnaise. I prodded the red flesh cautiously with an inadequate plastic fork. It was the roll that shocked me, consisting as it did of soft sweet yellow bread. The lobster was fine, not too goopy and the whole thing was surprisingly good. The coleslaw was fresh and crisp. I enjoyed lunch. 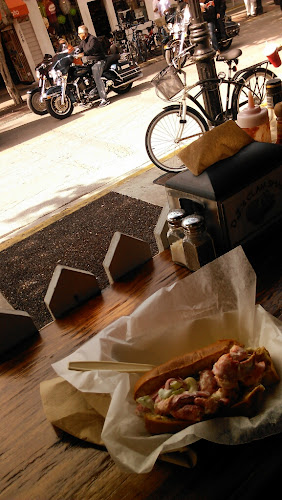 Here's a thing. I heard the gloomy guy telling another customer this clam shack is going to on the food channel in a couple of months. I had heard the drive-in guy was in town and apparently it will be an all Key West show with reviews of Badboy Burrito and Garbo's. So as it happens my culinary travels while my wife was away has helped me cover these local take out eateries. I love Badboy and my first encounter with Garbo's was excellent and both those joints represent Key West cuisine, a local twist on classics. A lobster roll though doesn't seem particularly Key West, as good as the food was, and I am going back for the clams...and another lobster roll! However if you wanted a third Key West dive or diner I would plump for El Mocho on Stock Island as representative of Cuban cuisine, because Cuban is actually a true local ethnic cuisine. Perhaps for a TV show El Mocho is maybe a tad bit too ethnic. So then why not El Siboney or even Sandys or Five Brothers...pick your poison. But New England lobster? Weird. 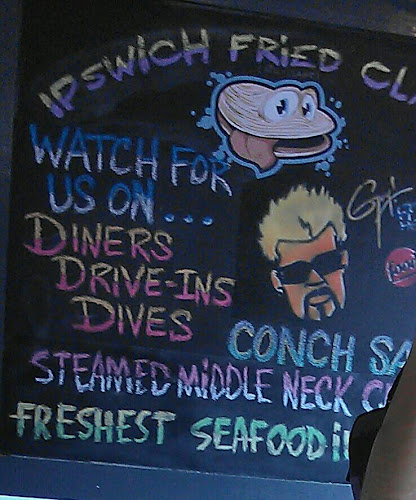 Hey, it's their TV show and I'm sure we all have opinions. Good luck to 'em. Meanwhile back in Old San Juan my wife was having a farewell lunch in the other Commonwealth. I rather liked the look of the pork chop in guava sauce, and wondering about that...got me wondering why we are so afraid of how other people do things. I wonder why the food channel is so white and so mainstream. We don't have TV at home so perhaps our occasional glimpses while on the road have revealed an excessively monochrome food channel. 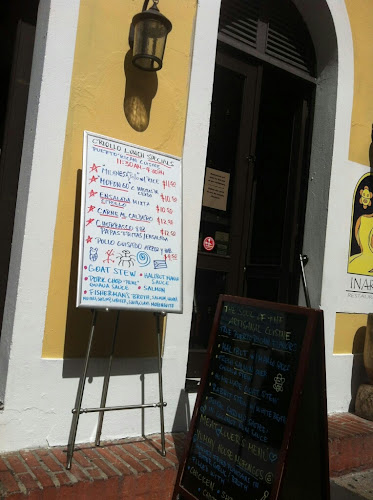 On the other hand before we get carried away, judging solely by the exterior, that eatery in Puerto Rico does not look like a diner, and certainly not a dive, and drive-ins weren't around in the 17th century when the "Rich Island" was living the high life and English colonists were floundering around in bogs and forests. 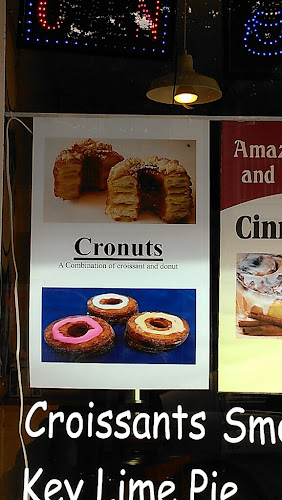 After the lobster roll exploration I figured I had less than twelve hours before my wife got home so pudding was in order, another opportunity to explore outside my usual haunts. In my world pudding is anything sweet eaten to end a meal and it so happened I had left my dog in the car in a shady spot in front of a bakery called Key West Amazing Cakes and Creations on Fleming Street just off Duval. 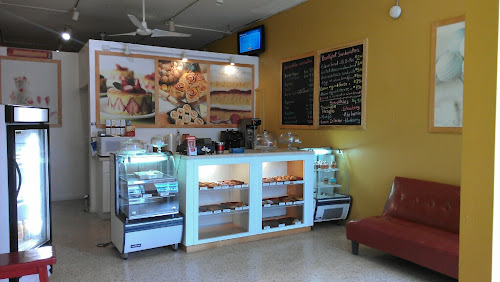 I'd heard about the doughnut and croissant crossover started in New York and breathlessly reported on a National Public Radio. They also told of huge lines and limited sales at the bakery to spread the wealth of a few hundred Cronuts among the masses. I could not imagine standing in line for hours to buy a pastry. But I was curious. 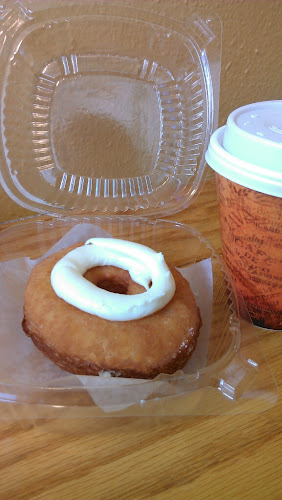 I guess by the time deep fried croissant pastry shaped more or less into a doughnut, reached Key West the lines have thinned. I only had to wait a couple of seconds for the nice lady to come out from the back before she offered me the choice of chocolate vanilla or strawberry and with a vanilla I took a stool balancing my bun and a cup of coffee. Here goes nothing. 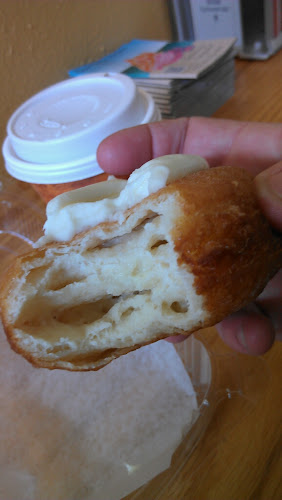 It wasn't bad at all. Fried pastry can't taste bad but ambrosia it's not. I'm not certain I would choose fried croissant dough over a "proper" doughnut given the choice. A cruller ("old fashioned" in California) might beat out a Cronut in a contest. On the other hand let me get back to you. I texted my wife and she wanted a taste when she got home so I put a chocolate and a strawberry in a to-go container for home later. Then I'll know for sure which tastes better.