They call it Meeting of the Minds or MOM and people who like Tropical Rock music show up in a Key West, the place where their former idol Jimmy Buffett go his start and they hang out and have mild mannered middle aged adult fun. After the madness of Fantasy Fest the Parrot Heads are a nice mild tonic in a town that is rather exhausted and jaded by the nudity and noise of the October celebration. This is police work writ small. 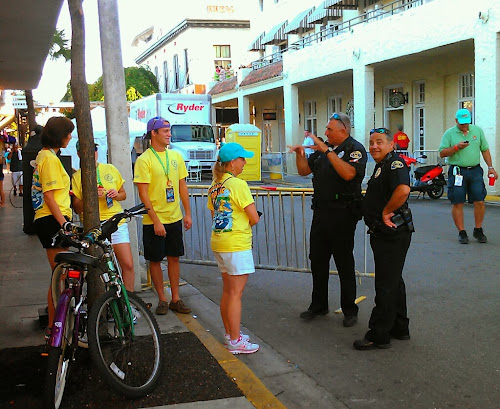 Silly headgear is a hallmark of the Parrot Heads and should evince no surprise when on Duval this weekend. I am not a fan of headgear silly or otherwise but this is harmless stuff. 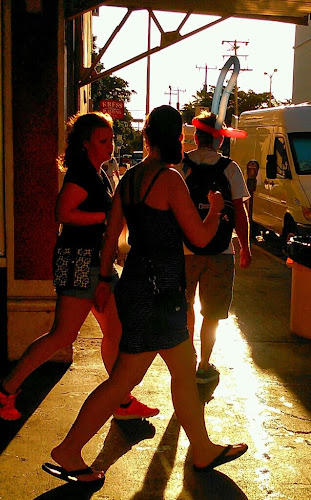 As usual I had to get to work and when I was on Duval things had barely got started. I shouldn't have even surprised to see people anxiously lining up for the distant evening entertainment. Parrot Heads are a devoted lot. 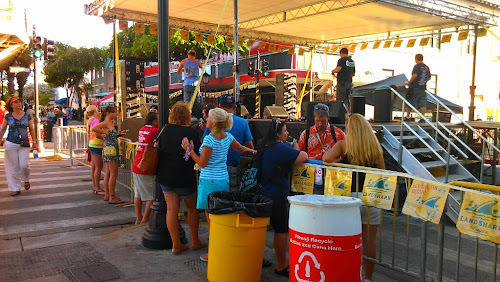 Fantasy Fest makes me wince sometimes though I see the point, where this lot just make me smile. It seems silly but aside from raising money for charity Parrot Heads are cheerful,harmless and relatively low key. They don't make much noise unless you are close by Casa Marina resort where they roost, they drink but they aren't rowdy and it seems to me they could teach a lesson or two to people who come to Ksy west and make proper fools of themselves. 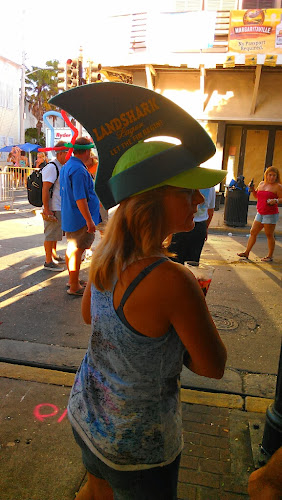 More than you ever wanted to know about Parrothead - Wikipedia, the free encyclopedia. 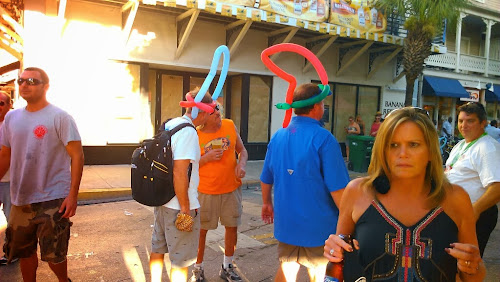 After all how cam one get behind a bunch of people who think lager is the be all and end all for a party? Fizzy beer? Really... 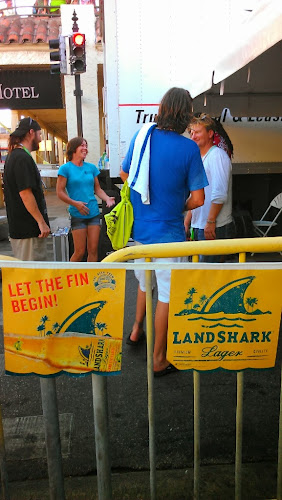 Yes but look at the smiles. This is an invasion Key West can live with, easily this weekend.

Posted with Blogsy
Posted by Conchscooter at 12:00 PM 3 comments:

Halloween 2013 is history and we are sliding fast into the end of the year and the holidays and fattening foods and all the rest of it. But before we go I have to thank my wife for dragging me to see the haunting at Fort Zachary Taylor State Park. As silly as it sounds I have to confess it frightened the shit out of me. 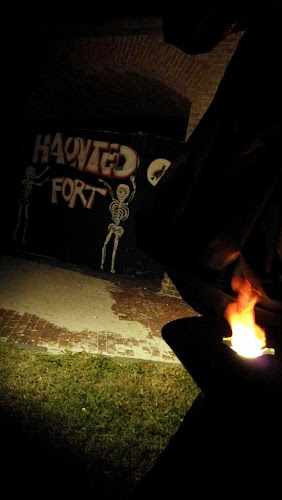 At the entrance we were directed to the motorcycles and bicycles lane which was staffed by some really charming I'm sure volunteer who had no facility with money and no ability to get a bloody move on. Eventually the ditz fumbled enough of our change and stopped losing the tickets long enough to let us in. I had plenty of time to take a picture and frankly it was the last decent picture I think I snapped all evening, but eventually we got in and at $13 apiece I was wondering what this foolishness was about. I think my wife was wondering too because she made a point of saying how fun it was to be in the park after dark and I confess it really was even though I wasn't expecting much else. We should have gone for a walk after we staggered out of the haunting, but I had to get to work and my nerves were in no shape to enjoy the darkened woods around the fort. 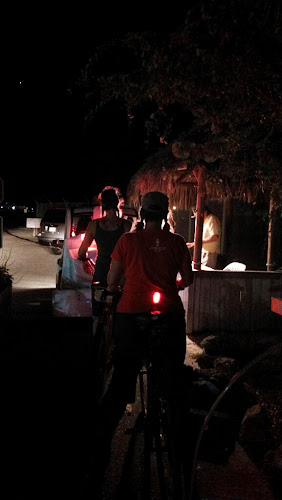 The fort lends itself to a scene of the macabre, let's face it with its 19th century brick walls and dark shadows. 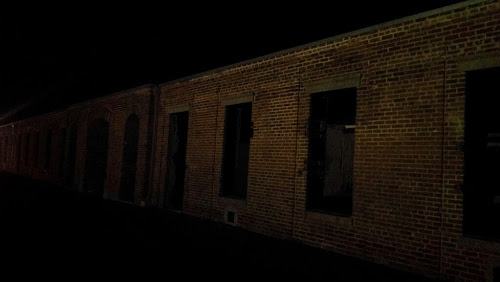 There was a line to get into the haunted part and some bright spark had the inspired idea to play old scary movies on a projector screen...great fun. We were in line with some kids in front of us, two Heidi lookalikes with long blond hair and apparently sweet dispositions, possibly ten years of age though I am hopeless at guessing children's ages. They were really excited and chattering away and despite what people will tell you I find Key West kids, even teenagers to be polite and respectful in a way that surprises me. Perhaps I scare them into compliance but I think children around here somehow learn old fashioned manners. I have no idea what parents are doing right. 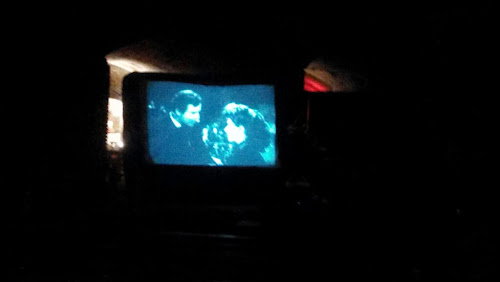 Anyway they were telling us they weren't going to go in because it was too scary and I sort of stood there stolidly pretending to be my father who never got scared by anything (except death, the closer he got to it I found out later), little did I know I was going to have the bejesus freaked out of me. Anyway in we went as the usher wished us a good time...and I was not really expecting much. The first chamber had a tableau with a madwoman cutting off a dude's head and his neck was double jointed such that he could sink his head forward on his chest as though indeed she had sliced it. It was gross and I got a kind of picture...so far so good. We followed the twists and turns of wooden partitions set up along one entire side of the fort, among the cannon and the arched brick walkways....very eerie! 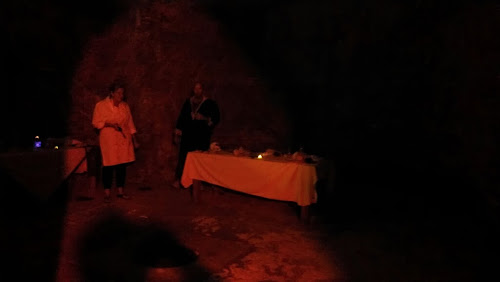 I suppose I should point out I do have a bit of a weakness and though I don't believe in ghosts and the supernatural and all that stuff I have a deep abiding aversion to being in a place like the woods after dark. Put me on a wooded trail alone with the sounds of the night and I will curl up in a ball and wish to the god I don't believe in that I were dead. I have trained myself to walk Cheyenne on my street late at night; a very dark, street-lamp-free mile with palm fronds rattling and shadows closing in all around me. Put me around town or in suburban agglomerations I have no problems, but a wood alone at night would flip me the fuck out. I have no idea why. I love sailing alone at night and I can be alone at sea and have no fear of the dark at all. I remember once motorcycling down a long dark road through the middle of Florida one moonless night on my way to a friend in Ocala and the night closed in on me like a cold deathly grip around my throat as I pelted through the blackness alone, me and my Suzuki. What if I get a flat? Or the engine conks out? I asked myself those questions instead of enjoying a fabulous ride, which when taken by the light of day revealed miles of pasture, lonely farm houses and absolutely nothing to fear at all. Duh! 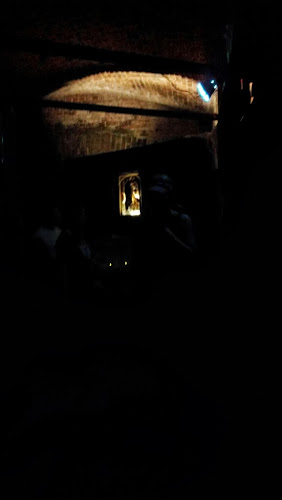 Well, the walk through the fort was far more intense than I'd have imagined, they blew fog, faces sprang at you from trap doors, statues came to life and strands of fishing line grasped you invisibly around the face. It went on and on and on and pretty soon I was ready to call it quits but there was only one way out and I had to press on. My wife had great fun watching me succumb and I tried to regain my equilibrium hiding behind my camera. I got a ghoul in my view finder just as...some other horror brushed past me with a clap of thunder in the dark and this was the result: 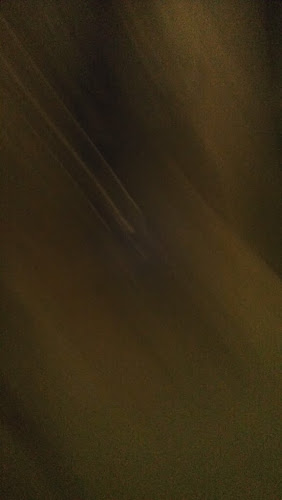 I was wet with sweat by the time we got out and I took deep refreshing gulps of the cool night air. The ten year old was waiting on the parade ground and asked if we were scared; she had in fact ducked out after the first bloody tableau, smart kid. My wife answered for me laughing uproariously: "He is!" she chortled. "Scared stiff." Very funny I'm sure.

I am definitely going back next year only this time I promise I won't ever shout out "Fuck!" At the top of my lungs no matter how close the boogie man gets to me. And to the mothers of the children in the vicinity I hope it wasn't too difficult to explain to your kids that even the bravest of adults sometimes expose the chink in their armor and swear words are all they can find to seal the gap. Sorry.