The clock on the top of the county building on Whitehead Street reads four, but that was winter time, and now we are on daylight saving time so it was actually five o'clock by the time Rusty and I reached this point. 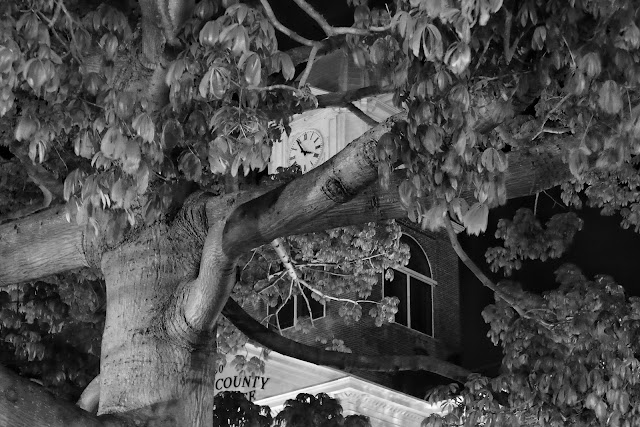 It was deep dark night, a walk Rusty and I haven't taken for a while and as odd as it may sound I thought it would feel more normal for me to be on the streets with no one else around because even before the virus there was no one on the streets at this awful hour. I like Key West empty and dark, as Rusty wanders close by, I have my camera and my head is empty. 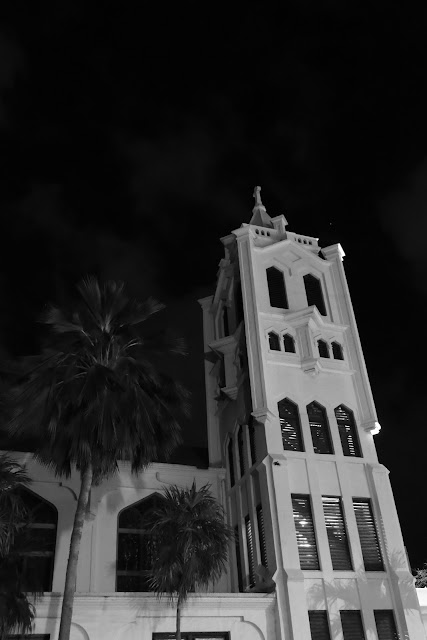 I cannot adequately describe the emptiness of Key West at that hour because there really was no one downtown. No one at all. Usually there are the overnight workers cleaning the closed bars,  there are drunks stumbling home and the sleepless like me going for a walk. Nowadays I can't even find any residentially challenged sleepers in the nooks and crannies of Old Town. Oddly enough I don't find it creepy or weird, but I do find it melancholy, with the medical problems some people face and the huge economic blows this lock down has caused almost everyone who works in these islands. The fact that my wife and I have jobs is inestimable but it doesn't prevent one from seeing  what is happening to those around you. 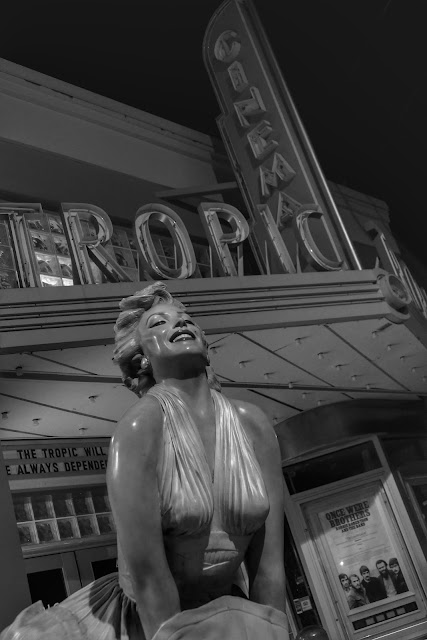 Winter in Key West is a time of activity and busyness so much so I usually don't spend much time downtown until the flood of people leaves when the snows melt Up North, but nowadays there isn't much reason to show up at all. No restaurants except for take out, no theater no movies and no browsing the stores. 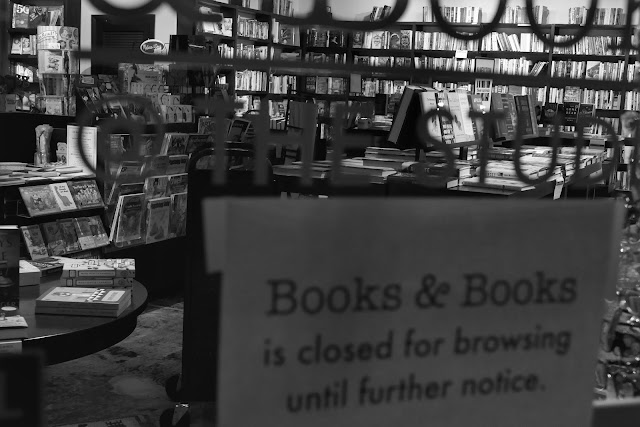 I fear my mood is influenced by photos I have seen of the Chernobyl site where the nuclear melt down occurred in the Soviet Union. Filatova Elena Vladimirovna's  original motorcycle rides through the nuclear zone though perhaps out of date, and some critics say overly poetic, remain memorable and haunting. And while I acknowledge it is a stretch in the time of pandemic to compare Key West I find myself thinking about the comparison as inept as it may be. 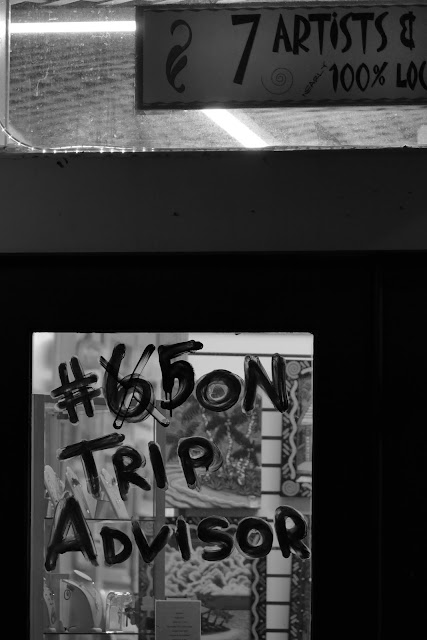 I remember Trip Advisor! Do you? Perhaps one day a travel advice page will be real handy once again...These days when I see an old sign like this in the window of a business I think of the lives abandoned in Pripyat. Lessons on the chalkboard, toys abandoned in apartments, dinner plates on the table, all irradiated and unlivable for decades. Then I do start to get creeped out and have to rein in my over active imagination. 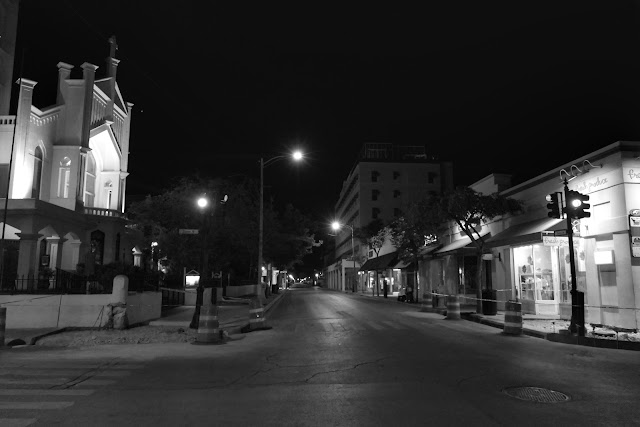 I have been reading about the years leading up to World War Two from various points of view. I moved from the Spanish Civil War to the political intrigues leading up to the war itself, the period known as Appeasement. Looking back on what people went through back then I find myself feeling a  little embarrassed by how hard it is to get people nowadays to cooperate. Men went to war and didn't come home for years so families managed on the home front and hoped for a speedy end. Nowadays there seems to be no resilience at all among so many people. I shouldn't like to think everyone is like that but it feels like too many people are going their own way. 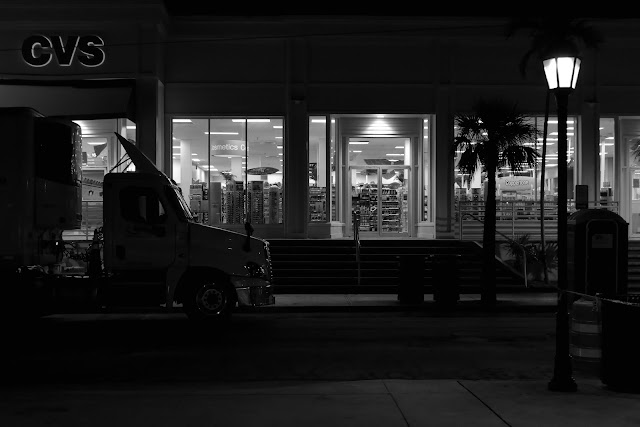 So then I ask myself is a little resistance to government authority a good thing? Europeans are terrible at questioning authority, something that Americans specialize in. As I watch the life drain out of my community and people lose income and health insurance and the ability to hang on I wonder what exactly the plan is here. The numbers of dead and ill seem appalling but not crippling. Should we shut down the world economy for this weird virus? No one even seems to know how to try to deal with it yet. Oddly enough I do have some masks left over from my tussle with the gross MRSA bacterium in the hospital in 2018 as I recovered from my motorcycle wreck. However I am not all sure if I should wear it sometimes... always... or....never. And why. Or why not. The conclusion I have drawn is that everything with this virus is a best guess or a worst case. I don't seem to come even close to people on a normal day in my dreary half quarantine Florida life. 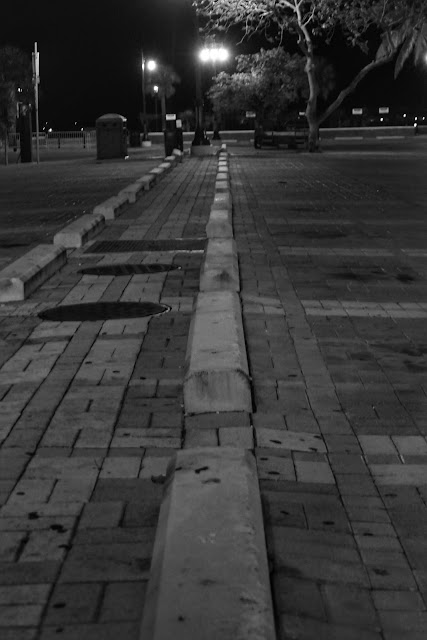 Sweden has decided to ignore the whole mess and go about business more or less as usual with some few reservations for those at risk. I guess they will be the control experiment and if they all end up dead or gasping we will know for sure pretending there was no virus was a bad idea. Utah is doing more or less the same I believe. Florida is half way between, sort of reacting but not too intensely. In Florida you can fish hunt and walk the dog but only six feet apart. That's not too onerous at all. Not if you have a job that is. 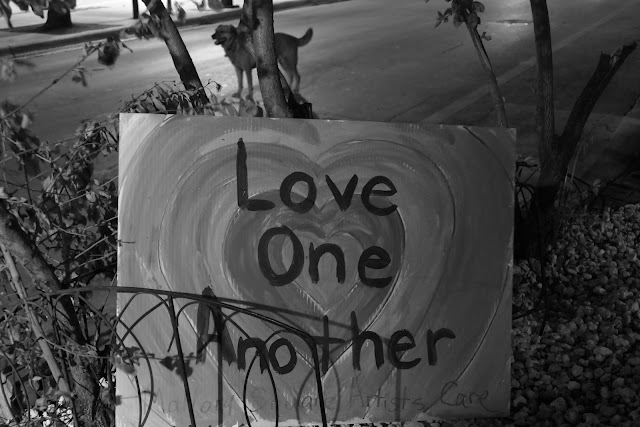 I am not fond of instructions like that one posted on Duval Street. I understand the sentiment but I do not approve of mawkish public sentimentality like telling people to love one another. private emotions for private spaces please. Yes, I know, we live in the age of Facebook and public self flagellation is a way of life which requires wearing your heart on your sleeve for any emotional thing.  I prefer a rather less sentimental approach: Be polite, stay away and keep on keeping on: that's what works for me. Love, I insist is not a public emotion. Unless of course it's Rusty. 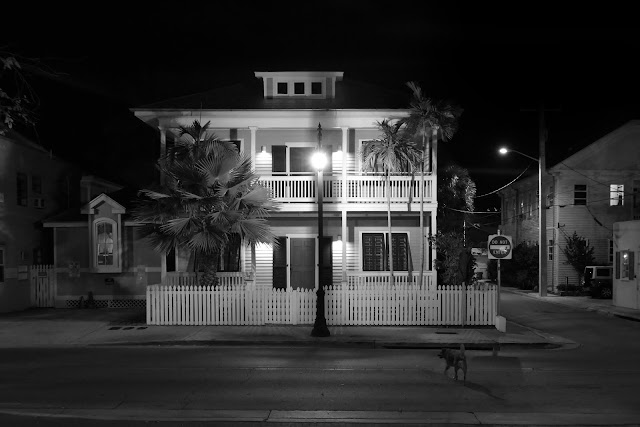 Here's the thing with Rusty: I have taken great pains to train him to stay out of the street, to run for the sidewalk or the verge or the roadside bushes if a vehicle is in sight. Then he sits and doesn't move until he thinks it's safe. He even, and I swear this is true, looks both ways before stepping into the street even with my permission. Still, when people or vehicles are around I tie him to me and we walk as a unit mostly to keep other people calm. Now the little tyke owns the streets. And I slavishly trail around behind him, his servant, leash in one hand plastic bag in the other and camera around my neck. When the plague is over people will be back I keep telling him and then there will be no more slacking. He ignores me as usual. 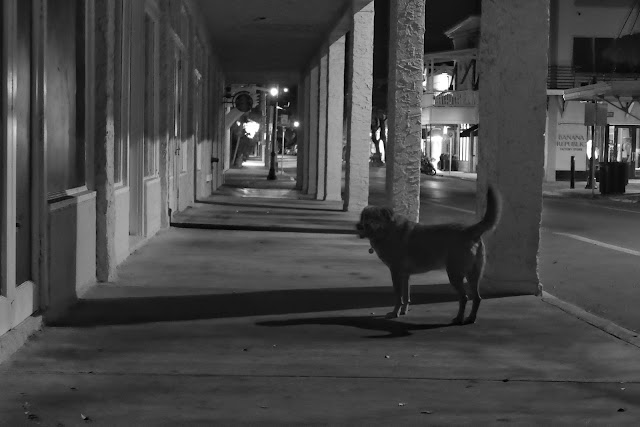 And then when people started to appear, one here, one there we went home, he to sleep in his new washable bed, me to chores.
Posted by Conchscooter at 12:00 AM 2 comments: