As if to prove a point, if you were seeking one about the level of stupidity this pandemic is bringing out into public view, the Citizen newspaper published this extra on Monday afternoon, and shortly thereafter the whole re-entry sticker thing has been canceled.

Now the back ups will get worse as anyone trying to enter The Florida Keys will have to show ID on the 18 Mile Stretch and on Card Sound Road:

By Timothy O'Hara Key West CitizenApril 6, 2020
The Monroe County Sheriff’s Office is beginning to report fake hurricane resident re-entry stickers on cars trying to sneak through the two checkpoints coming into the Florida Keys.
Local government leaders set up checkpoints on U.S. 1 and State Road 905 more than two weeks to slow the spread of the coronavirus. Only people who live, own property or work in the Keys are allowed into the chain of islands at this time. 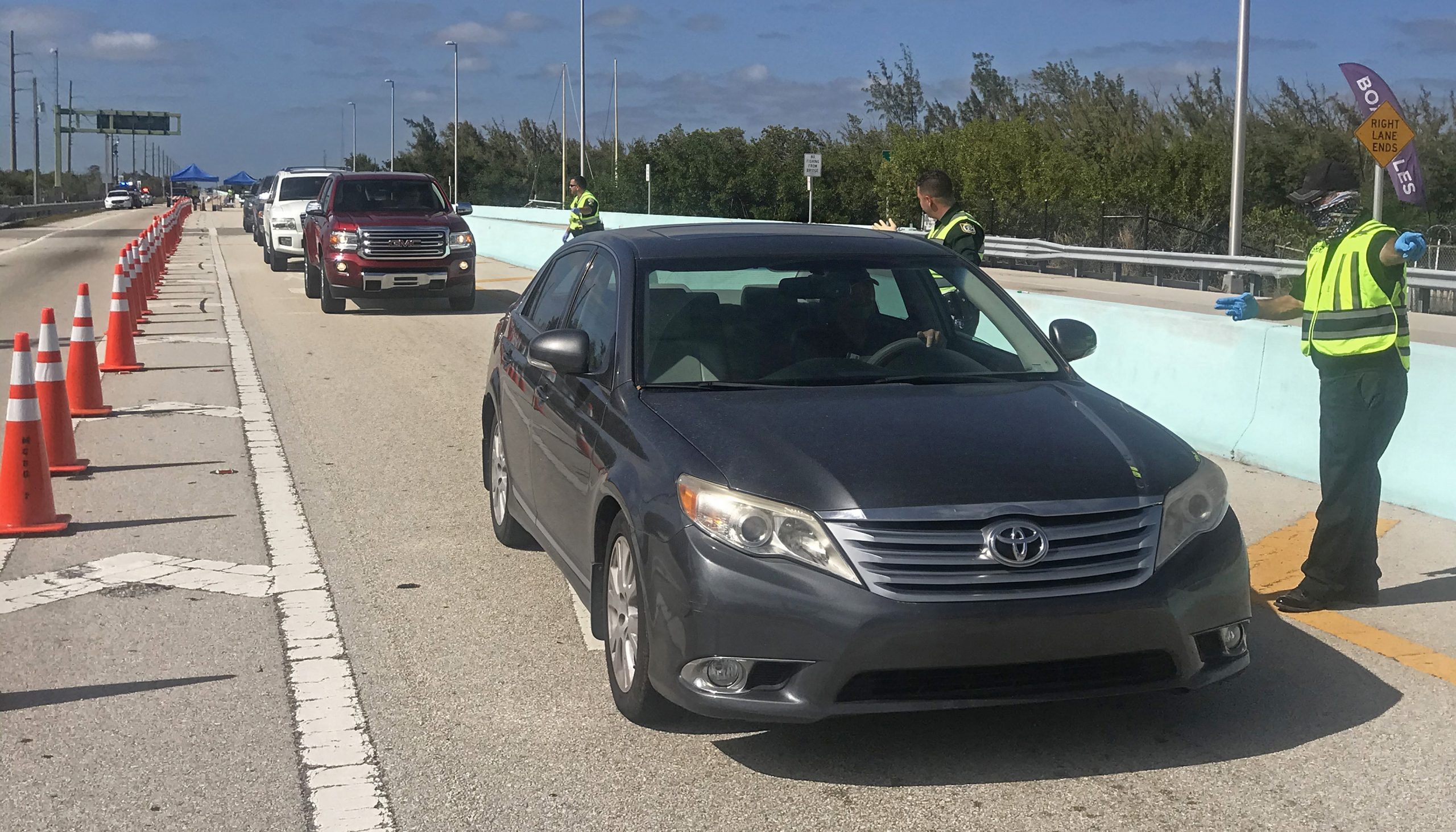 Sheriff’s Office deputies started seeing the counterfeit stickers on Saturday, Sheriff Rick Ramsay said Monday. Deputies confiscated about 10 stickers on Saturday and a considerable amount more on Sunday; “bags full of stickers,” Ramsay said.
Motorists, mostly from Miami-Dade County, told deputies they bought the stickers from counterfeiters on the mainland, Ramsay later told The Citizen. None of the motorists were cited or charged criminally, Ramsay said.
“This is making our jobs a lot harder,” Ramsay said. “We are trying to make our community safer.”
Ramsay and other local leaders discussed the issue during a conference call on Monday morning. Ramsay called on county and Keys cities leaders to stop issuing new hurricane re-entry stickers. 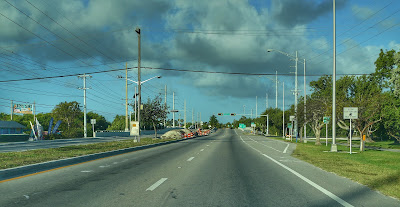 Posted by Conchscooter at 4:12 PM 2 comments:

I had last Friday off work so my wife devised a plan for a quick shop (we have plenty of toilet paper as quite by accident we got some before the famine) which I combined with a Rusty walk all of which started a bit late as I overslept and Rusty was tired enough to let me sleep. Good dog. 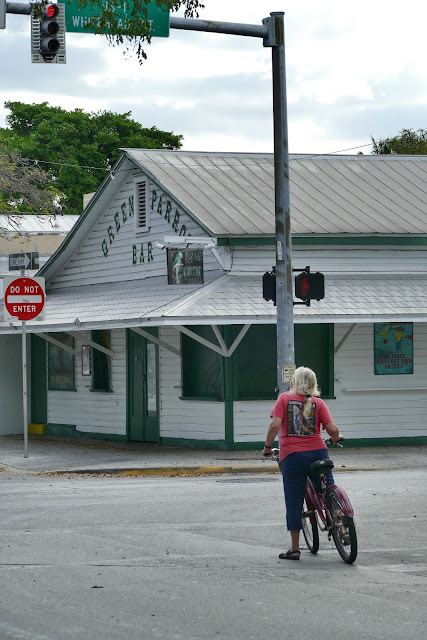 My first shock as I navigated a solitary path along an almost empty Whitehead Street was seeing a  cyclist waiting patiently at a red light. Abiding by the law suddenly seems important in a pandemic. For instance I find myself disinclined to speed these days partly because I don't think aggravating cops in these stressful times is a great idea and with so few cars on the road  travel times are greatly reduced anyway. Bright sunshine and shadows at the courthouse: 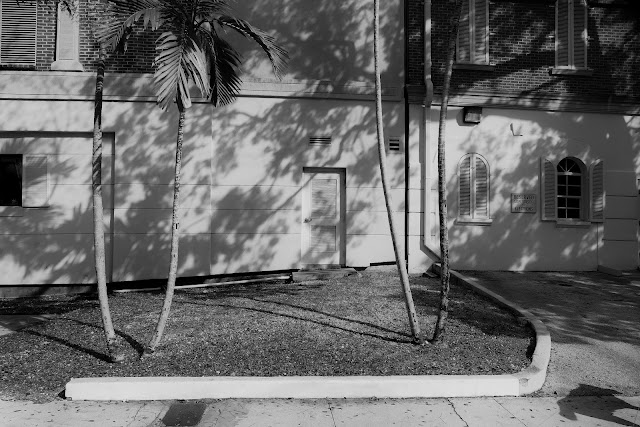 Take out windows are everywhere. Ordering out is an act of social solidarity these days. Do it and tip ridiculously well if you have work. 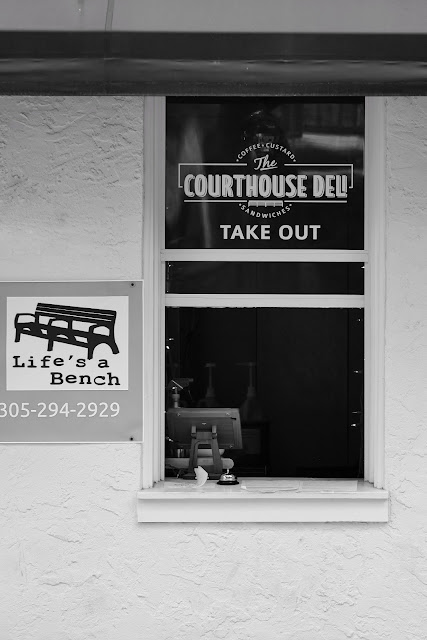 I saw a cross above the rooftops, probably St Peter's on Center Street riding high in the sky. I reined Rusty in on the end of his leash and he paused politely for me. So I photographed it. 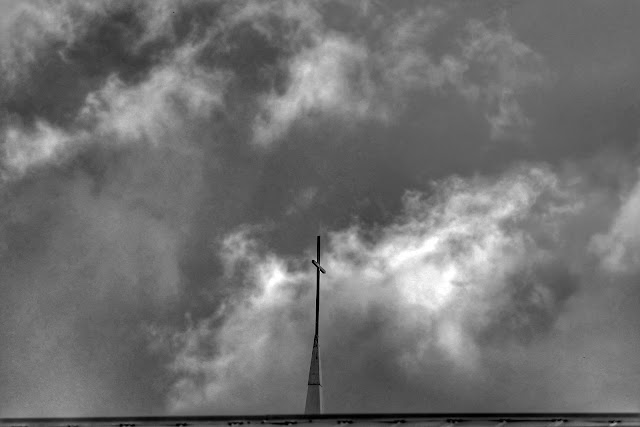 Back on Earth, on Duval Street more precisely clean up in the absence of people continued: 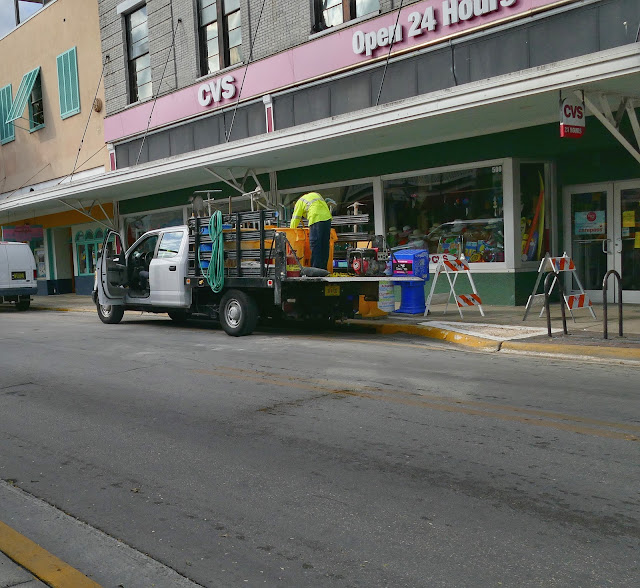 And sidewalk repair and re-paving from Front to Truman continues apace on Duval Street. A good idea to do it now with minimal interruption to commerce but still the contrarians in the community found something to complain about. Not the time to spend money on public works they cried. 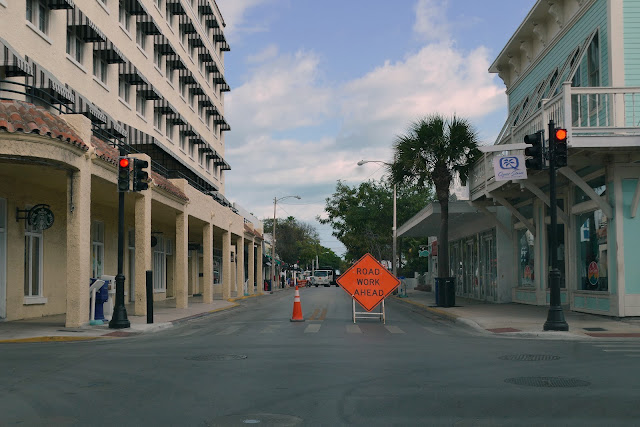 I cannot get used to the gross and gruesome greenhouse on top of La Concha, the spot where the hotel used to house the The Top Bar and terrace, where you could sip white wine and contemplate suicide as legend had it. Now more prosaically you get a massage inside the glass. 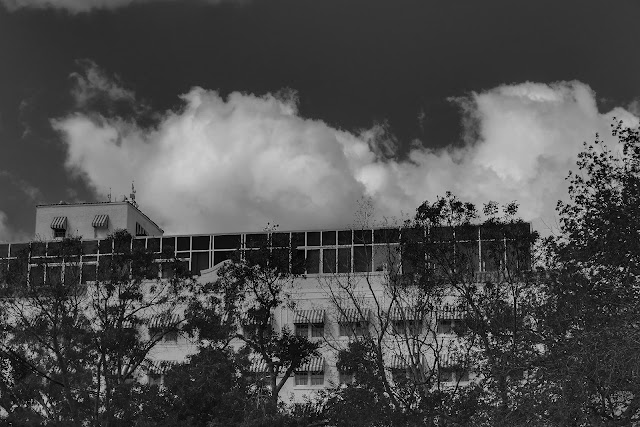 Check out the menu at the Barbecue place on Southard Street. It's a relic of a time gone by, pause and contemplate it. I remember after Hurricane Irma in 2017 I was wandering around Key West as things started to open back up and I got a day off. After what seemed forever locked into the police station, I could sit down at a counter and order a drink and be surrounded by ordinary people living life as it used to be. It was quite a shock after the isolation and living and working through the ghastly windstorm. I wonder when this menu will be reactivated? 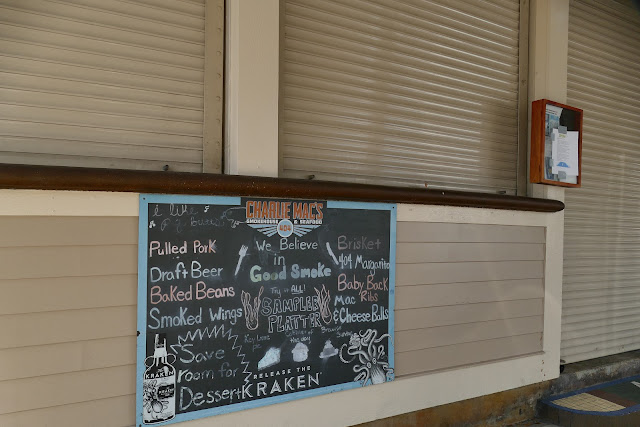 And this too, Art In Public Places: 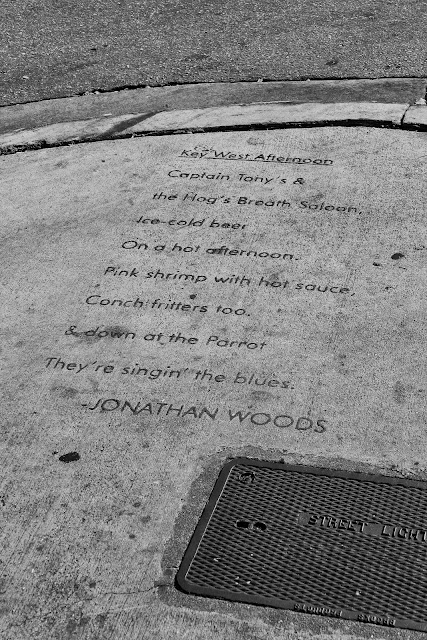 Enough of that, time to stop by Publix and do a shop at the bidding of the quarantined wife so I went to Key Plaza.  mask in place, cart handle sanitized I was ready for a brisk isolated walk through. 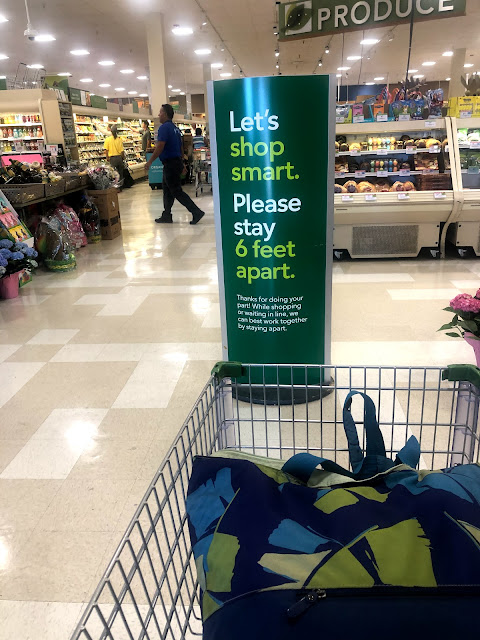 I got my first misgivings in the produce section,with berries potatoes and salad in my cart I tried to make a beeline for the deli section which seemed less crowded. 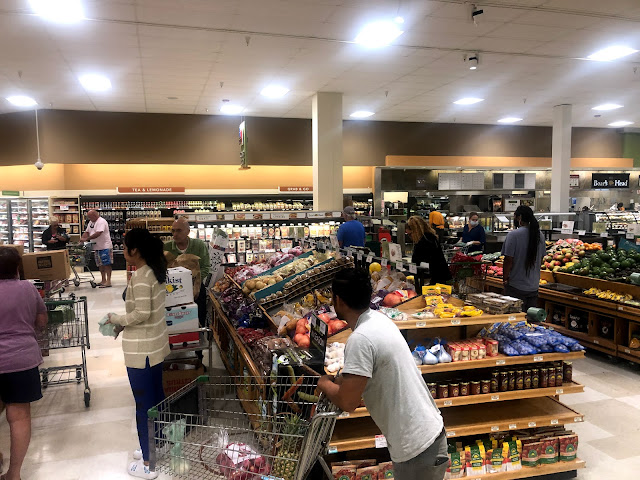 I found myself trapped between mass produced cheeses and packaged sliced meats and everywhere I looked people were closing in on me. I made for the bright light at the end of the tunnel which was rapidly filling with slow moving inexorable people. 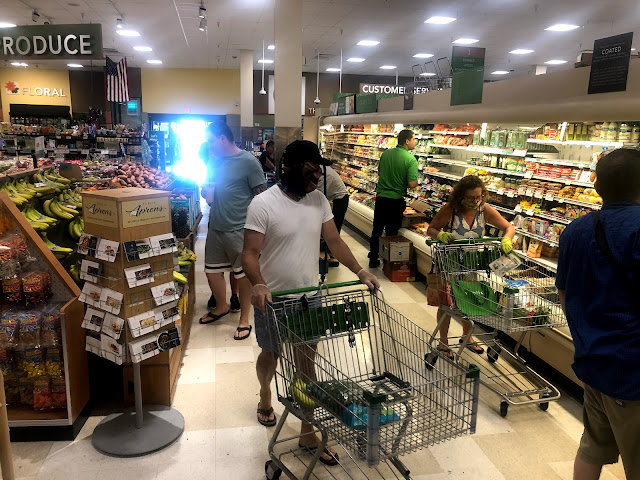 Normally I carefully wipe down the camera lens on my much handled phone but I just snapped these fuzzy pictures before heading out to the parking lot to get away. Publix management needs to re-think their policies before I'll go back there. I see no point in taking all these ridiculous elaborate isolation precautions if the supermarket can't keep shoppers isolated as well. Total fail. 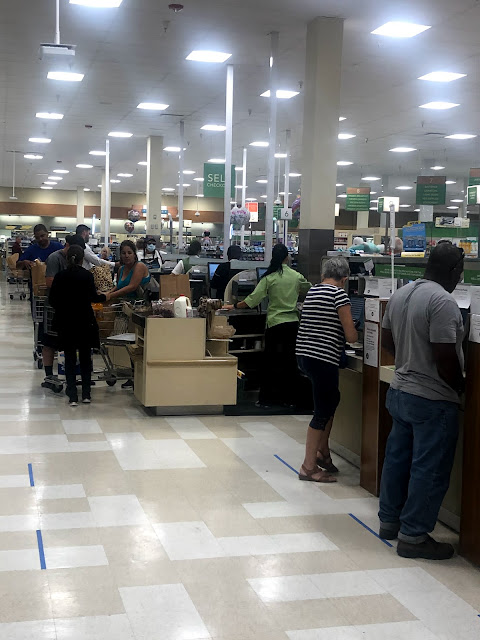 On the way home frustrated by my failed shopping I came across an 18 wheelers stuck at the intersection of Crane Boulevard next to Sugarloaf School. Luckily the lead van was driven by someone with initiative who convinced the deputy to let us all through the growing roadblock. I was about ready to eat the steering wheel in frustration when the sheep in front of me found the nerve to pass through the gap. Even the transit bus behind me found a way through. On the other side the line stretched half a mile to Mangrove Mama's restaurant as we went merrily on our way. 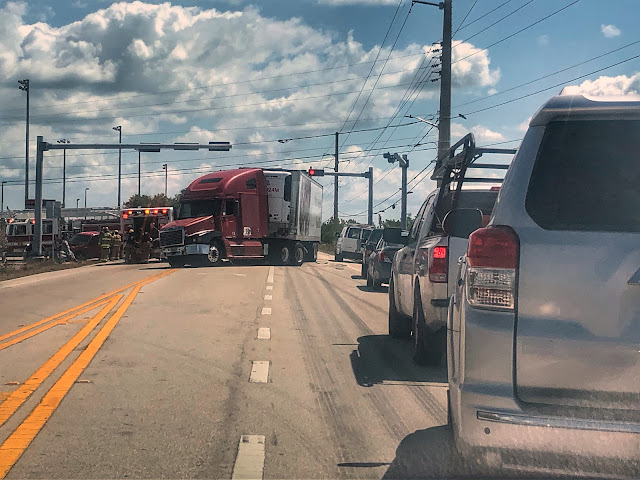 All this excitement quite wore Rusty out so as I went upstairs to moan at my wife about Publix management he did what he does best: 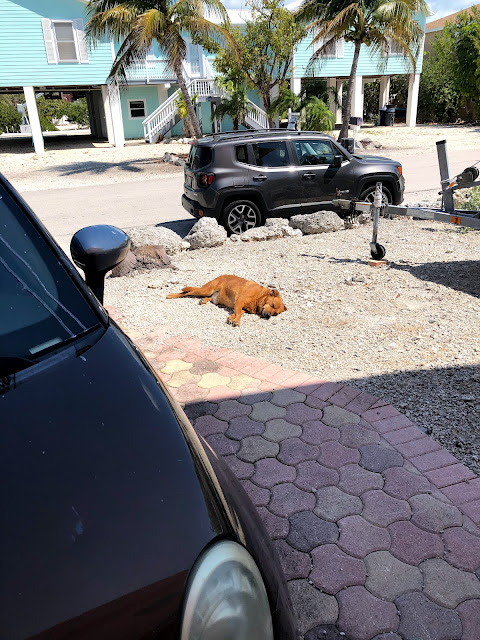 I have no idea why he likes gravel so much but he ignores the mats I've put out and he prefers to dig a shallow hole and lie sunbathing in it. Weird dog.
Posted by Conchscooter at 12:00 AM 6 comments: