From Christmas Day 2009 this essay from our last camping trip to the Dry Tortugas, 70 miles west of Key West. Which is by way of a reminder that we should do it again I suppose. It's not cheap as the ferry is somewhere between $150 and $200 each, though the camping fee in the park is as reasonable as only a government service can be, a few dollars per tent site, first come first gets. One big obstacle to taking another camping trip arrived at our home just after this trip...dogs are not allowed on the ferry (though they are allowed on the island outside the fort, so bring your own boat).

I saved these pictures from our Thanksgiving trip to Fort Jefferson. They had no place in other essays I wrote and today does not seem to be the day for much heavy commentary. Besides everybody is cloyingly sentimental about the holiday thing, so here is an antidote with not one picture that is Christmas related, I promise.


I like to think few enough people will even be reading blogs when they should be with their families, such that my pink crocs (my only footwear in the National Park) might pass unnoticed. 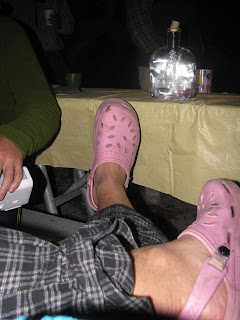 This phallic object (below) is called a Parrot Rifle, after it's inventor I think. The rifling referred to makes the shell spin about it's axis as it flies through the air, a common refinement in modern weapons, but it spelled the end, paradoxically for brick walls just like those of Fort Jefferson. 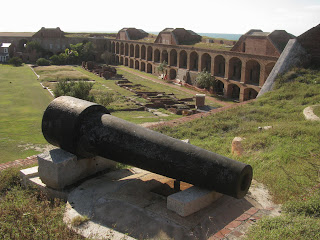 It was cold in November, much more so than December which has more closely resembled summer. We huddled by the fire grate and wore long clothing. 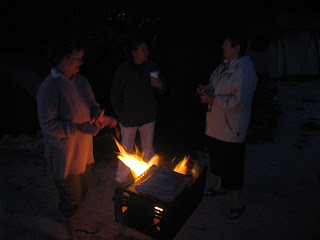 Of course summer reasserts itself eventually in the Keys. 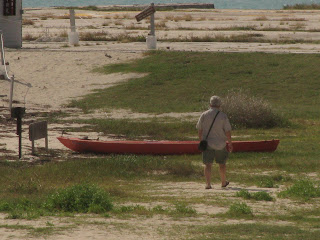 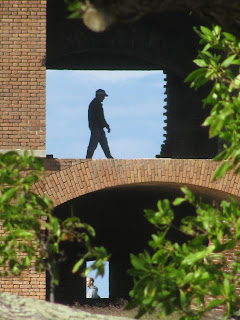 The life of a Park Ranger is, I think, somewhat less glamorous than one might at first imagine. 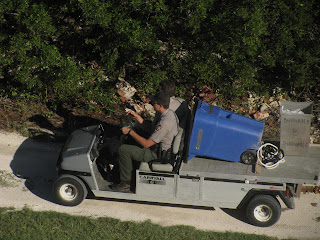 A loaf of bread, a jug of wine, and a nice private beach. Except of course for the irritating photographer on top of the fort's walls. 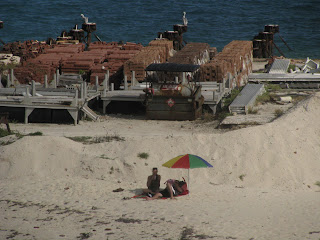 I think this pensive figure was Sarah from Fort Lauderdale who bumped into our party for Thanksgiving. At the time I failed to recognize her, I just liked the picture. I guess I was quite busy sneaking pictures of stick figures all round the fort. 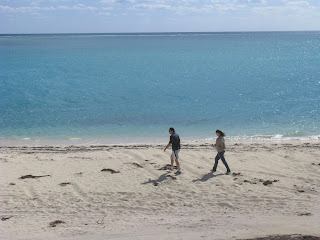 This lot reminded me of nothing so much as those field trips we used to make as school children. They were actually day trippers off the ferries starting their organized tour of the fort: 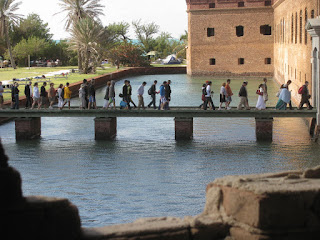 This Key West woman was camping with her family and as they got ready to leave her child took a ride in the hand cart, waving goodbye to all that: 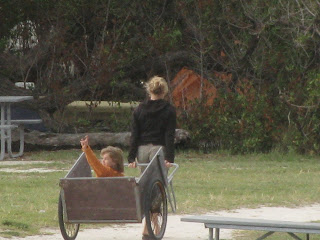 Later her kids were throwing themselves off the picnic tables and making their own fun, which is a skill more youngsters need to develop: 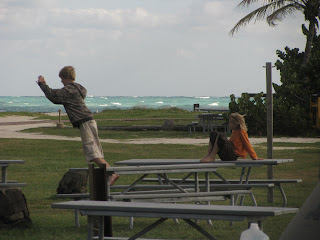 On the beach I spotted parties of Japanese (Asian really) tourists doing inexplicably odd things. I had never previously seen women in ankle length dresses wearing snorkel gear and then posing for a photographer. Maybe they are gag holiday pictures to satisfy some Japanese (Asian?) fad? 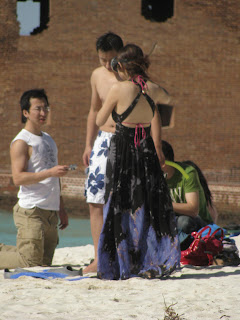 Here was one more conventionally dressed for the beach but the pose looks bizarre, like something out of a Hollywood poster from the 30's. Talk about culture incomprehension; the American pose is barely visible at the bottom of the picture. 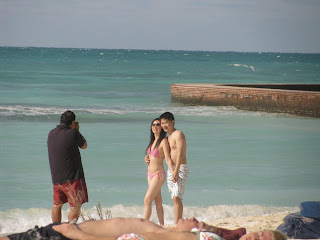 Here is a Park Ranger on top of the fort doing something, I know not what, more glamorous than taking out the trash: 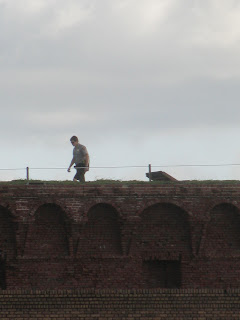 Jan was drinking coffee from his happy mug, a container covered with smiling flower faces. He posed to try and keep up. Any stray Japanese/Asian tourist watching us might have been culturally confused as we collapsed laughing after the pose was struck. 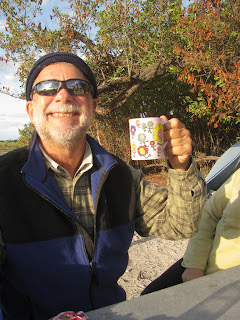 This was Jan as he looks normally. We watched him cross the campground as we snarfed pancakes and wondered if he looked more like a cat burglar after an unsuccessful night, or a mobster returning from a hit. 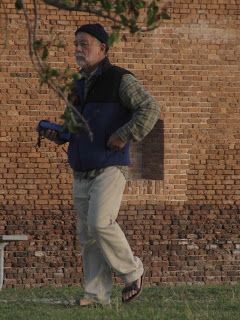 People checking the view. Lots of water out there, with whitecaps on a windy day. People from England call them, rather more picturesquely, "white horses" when the water gets all frothy: 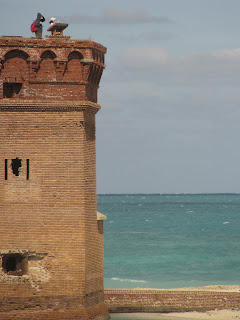 In this next picture Carol was walking back to camp after doing her usual watching the sunrise from the top of the fort. Behind her you can see what I call "buffaloes" on the horizon. When the buffalo are running is when you stay put in your anchorage and wait for calmer weather to go sailing. 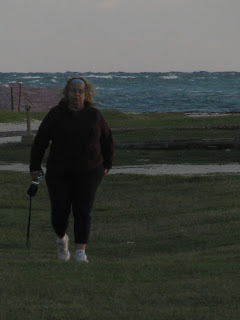 A quick look back at the beach on a cool windy day when towels become the equivalent of fluffy warm sweaters. What they were looking at so intently, I have no idea, unless it was a dried up old seashell. Tourists love those. 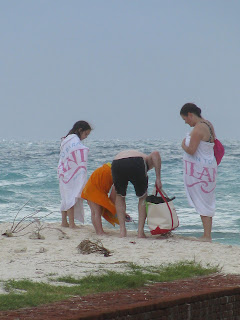 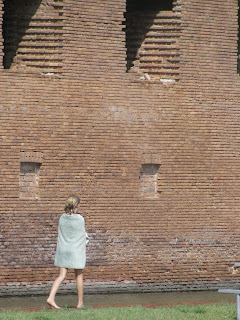 Still cool and breezy unless you are a butch male of the species: 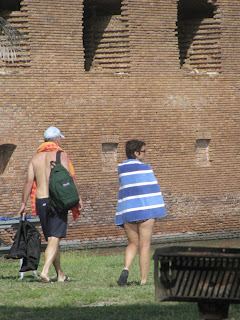 More Park Ranger work. They nattered for a while poring over their all important list. Then they looked off into the middle distance, thoughtfully. Possibly world peace hung in the balance and I had no idea. I was just camping. 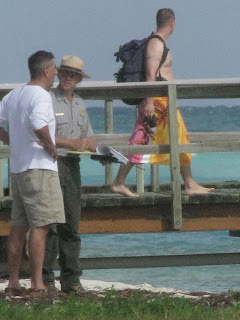 This lot stood around on the swimming beach. I wondered what there is to be puzzled about when in your swimsuit on a beach designated for swimming. The woman with fins has the right idea, if you like swimming in rough waters. 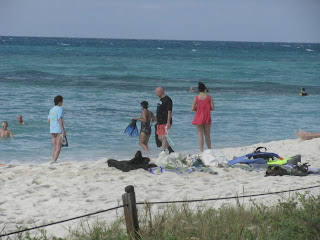 This next one just makes a child free man like me wish he had procreated and produced noisy, squalling, needy, versions of himself. That's me being sarcastic (not ironic please note, lest you get the two confused). 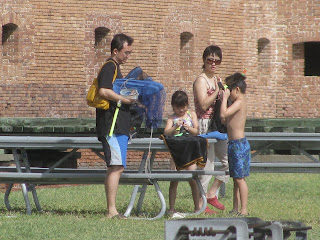 And we close with Kathy glad to have made it back to Key West without puking. 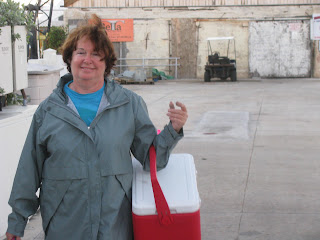 It was a surprisingly smooth ride home from Fort Jefferson. 45 minutes after this picture was taken I was back at work barking orders at police officers over the radio. Camping in the rain sucks, but the memories of the sunny days, the majority of our days, are priceless.
Posted by Conchscooter at 12:00 AM No comments: