Yes Yes Yes Or No No No 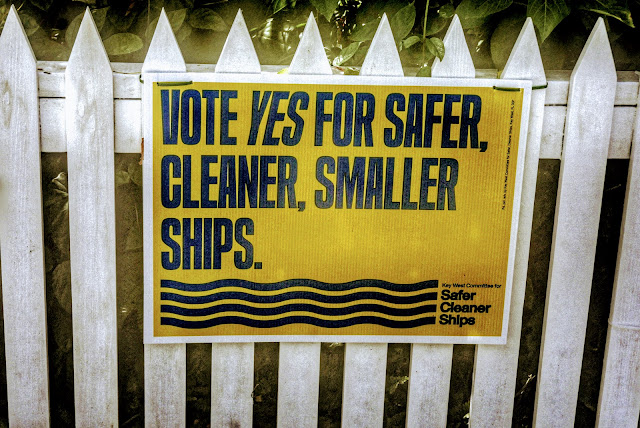 You'd think there are plenty of things to occupy the mind this Fall, but Key West has come up with one more thing to ponder, at least for city voters. I live in the county on Cudjoe Key, so even though I work for the city I don't vote here (nor by the way do I get to buy residential parking permits incase you were wondering). But I am curious to see how the cruise ship referenda go down. 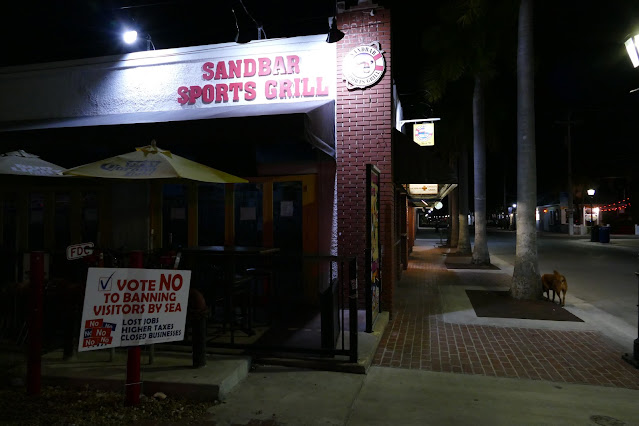 City voters have three extra boxes to check next month, lucky them. It's an issue referred to as one issue but it is a three parter. 1) Should there be no more than 1500 cruise ship passengers at a time in the city? 2)Should the city limit ships to 1300 occupants (passengers and  crew)? 3) Should the city give priority to environmentally friendly cruise ships?  The thinking is that it will be a straight vote on all three, all one way or the other as individual voters tackle this thorny subject in the voting booth. But in Key West you can never be quite sure..! Below we see the former Starbucks at Front and Duval, gone and soon to be forgotten no doubt. 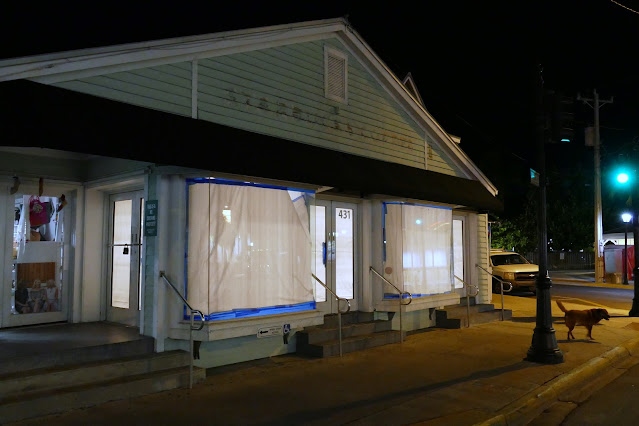 As you might imagine there are business forces aligned in favor of stomping these ballots to death in November and they have made themselves heard in court already where a judge ruled the voters get to vote. The city's four bar pilots who make a tidy living guiding the cruise ships into Key West filed suit claiming navigation is a federal matter and can't be banned by a municipality.  And so forth. I have no doubt we will hear more from them if the vote gets approved by residents. An Italian boutique on the 500 block of Duval has gone the way of all flesh, see below: 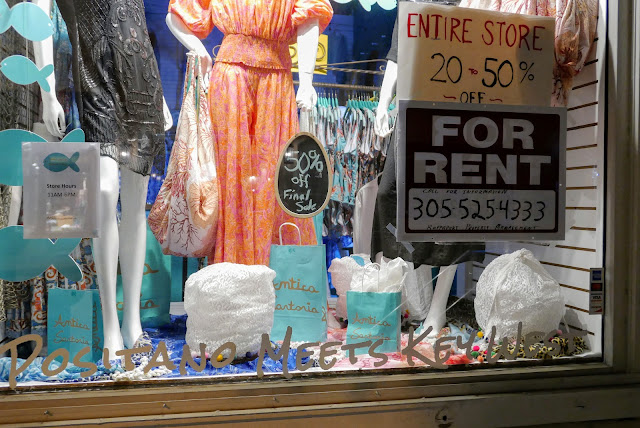 Lower Duval, the area around the bars like Sloppy Joe's Captain Tony's and the Bull and Irish Kevin's to be clear, lives and dies by cruise ships. Other parts of the main drag have long complained that cruise ship passengers are funneled into that area to spend what money they will leave behind in Key West. That position got a great big shrug from Lower Duval businesses who it now seems might have done better to spread the wealth. 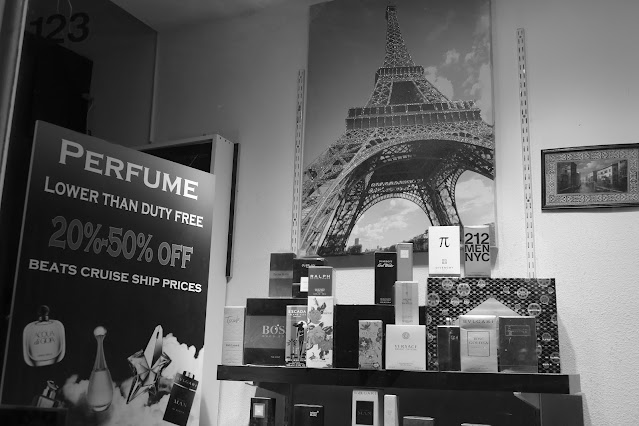 The Trump Administration has given the green light to cruise ship sailings to celebrate my birthday on Halloween so voters on November Third should have a clear reminder of what continued cruise ships in town will mean. Crowds yes, but crowds spending money. In a town that faces a rather severe test of future choices. The virus has put Key West at a crossroads and now we see which way voters want to go, more of the same or more upscale? 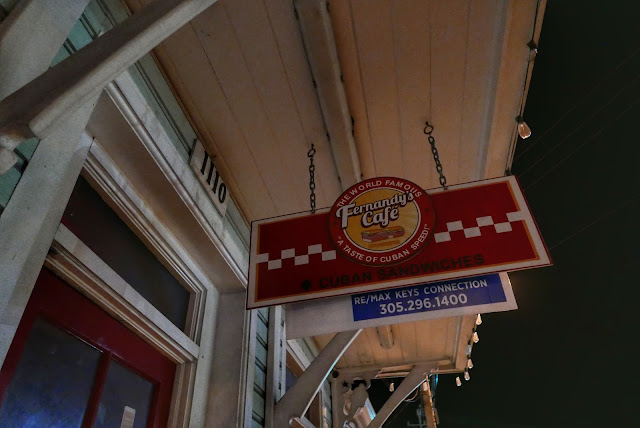 Businesses are closing all over the place. You can argue the virus only speeded some of them up and other businesses don't amount to much for locals as they were cruise ship focussed. The argument has long been that locals don't shop Duval as there isn't anything of interest to people not on vacation looking for souvenirs or alcoholic oblivion. The problem now its in filling storefronts where rents are in the $30,000 a mont range, or have been. While business turn over is a fact of life in Key West where the cost of living is absurd, I can't quite see how small local businesses meet extraodinary rent demands. And landlords are quite used to charging preposterous rent and getting it! Not so preposterous, eh? 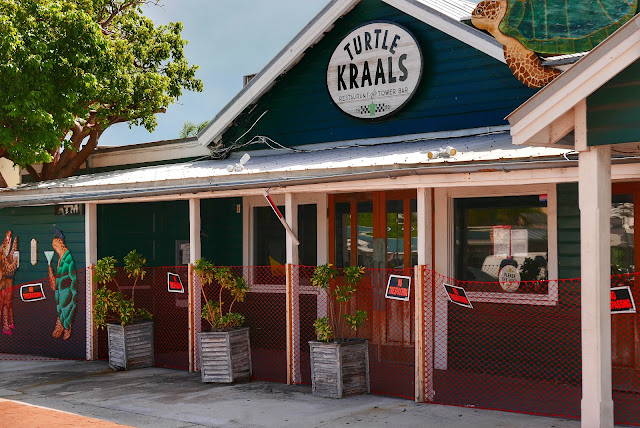 The opponents of cruise ship limits have been very vocal online opposing the votes and their crude and rather overbearing tone has drawn the attention of the newspaper. The Citizen has recently made a subscription more worthwhile than ever with what you might call some good old fashioned digging. Worth a read and here is a brief excerpt fro what hey found out about the rather shadowy sources of funding for the no vote.
As to who is behind the mailers and an identical campaign currently running on Facebook, that has an interesting answer. The three different mailers identify two companies that are separately paying for the ads: Protect Our Jobs PC, a political action committee, or PAC; and Protect Our Jobs, Inc., a non-profit 401(c)(4), which under Internal Revenue Service regulations is an organization that must be a non-profit operated exclusively to “promote social welfare.” The PAC joined the Key West Chamber this summer, according to Chamber Executive Vice President Scott Atwell. Calling the PAC a grassroots, “more positive” campaign group, Atwell said he didn’t know anything about the Protect Our Jobs social welfare organization but was aware they were two different organizations.

“The one that joined us is different from the one that is sending out scare tactic [mailers]. They’re different legal entities,” he told The Key West Citizen.

However, The Citizen has learned that the two organizations are chaired by the same person, Maria Isabel Garcia Del Rio, according to Alex Miranda, who works for Garcia Del Rio and who is heading up the “Vote No” campaign in Key West. While the PAC is registered at a trailer park in Dade City, Florida, and the social welfare non-profit at the UPS store in Key Plaza in Key West, the two organizations share a postal permit, were both created in August and, according to Miranda, have media messaging that is aligned.

As for who or what entity has donated the $23,754 that Protect Our Jobs PC reported to the state elections division as “contributions,” Miranda wouldn’t comment on from where that funding came. However, Citizen research turned up another political marketing campaign sponsored by Protect Our Jobs, Inc., the social welfare group. That campaign is for a petition drive aimed at ending the no-sail cruise ship ban in Florida, possibly indicating a funding connection between the Key West “Vote No” campaign and national cruise line industry. 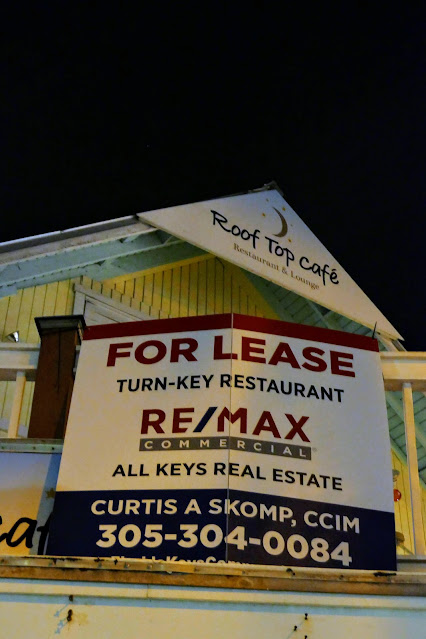 The thing is that the lockdown and subsequent reduced tourist traffic has opened a window on a key West that had been suppressed for decades. Less traffic, noise and pollution has a way of becoming addictive. On the water fishing guides say the waters have been this clean and clear in decades. Apocryphal say cruise ship supporters but it's hard to argue that giant hips don't stir up harbor silt. And all those passengers shitting and opening packages end up creating garbage that needs to be dumped. Supposedly not at sea but opponents argue not everyone is conscientious, hence the third question. 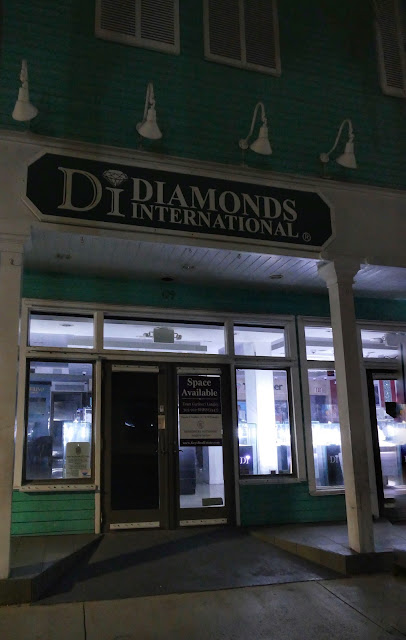 On the surface this issue comes down to money. Can the city do without the money that flows from the ships? Yes supporters sa tech city makes surprisingly little from cruise ship fees and passenger spending supporters crappy souvenirs and t-shorts more than art and high class tourism. These visitors come back say ship supporters and stay in hotels and on and on it goes. 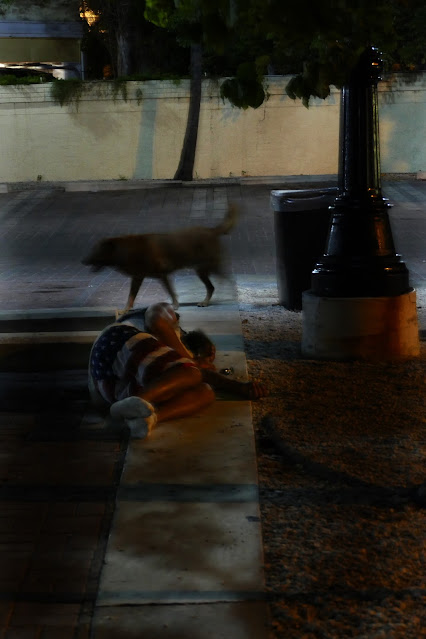 In the end I have no idea where the truth lies nor where in the courts a solid "yes" vote will end up. It's obvious lots of money is being spent to scare voters into maintaining the status quo and to me that's a pretty clear red flag, but on the other hand the gentrification that will follow an end to mass tourism may have some severe unintended consequence on a small tourist town that likes to tout itself as exceptional and quirky and unique. So far I have seen no interest on the part of the monied business classes and wealthy leaders to involve themselves in supporting the workers whose salaries fail to support a decent quality of life in this town. To expect these workers to kill off jobs and money that trickles down to them at all, may be asking a lot of them by the well heeled retired citizens with outside money and lots of it to support their island lifestyle. The devil you know or the devil you don't. This could be the start of some major changes in Key West. Or not.
Posted by Conchscooter at 12:00 AM 2 comments: