The Benefits Of Dog

My wife says I am much harder to live with when I don't have a dog so it was inevitable that we would be dogless for not very long. That we were dog-free for less than two weeks came as a bit of a surprise but that's what happened. The decision to get a dog requires some planning as one has to expect the new arrival to require training and supervision. In that we are lucky as we work opposite shifts and the new dog is rarely home alone. 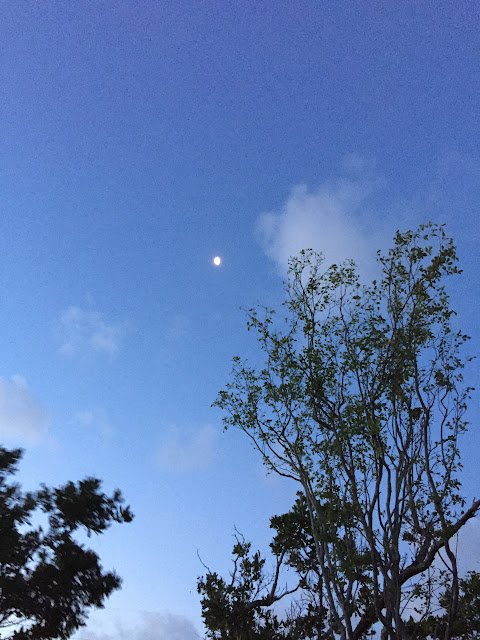 In a country where millions of animals are euthanized for want of homes every year I cannot conceive of paying to buy a dog from a breeder or worse a pet store. Some people say abandoned dogs are damaged goods, though from my experience the humans dumping the dogs are more likely to be damaged. Dogs tend to be grateful animals and have long memories so the kindness you show them tends to have a longer lasting impact. 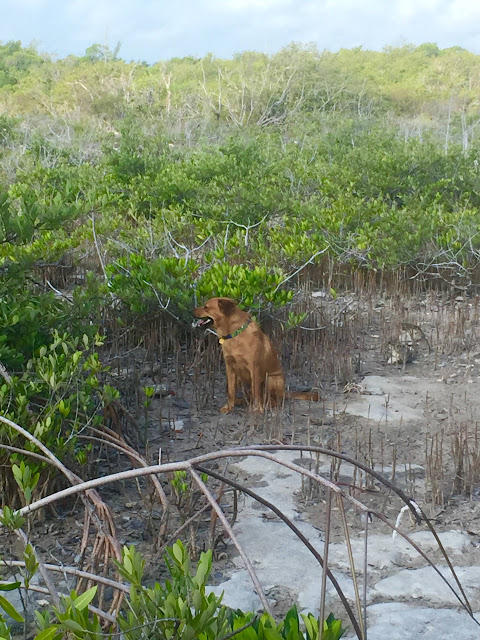 Rusty answers to his name, comes when called almost always, has stopped chewing his leash and no longer catnaps with one eye open all the time. My wife calls this picture she took of a soundly sleeping dog: "Rusty practicing for Cirque du Soleil." 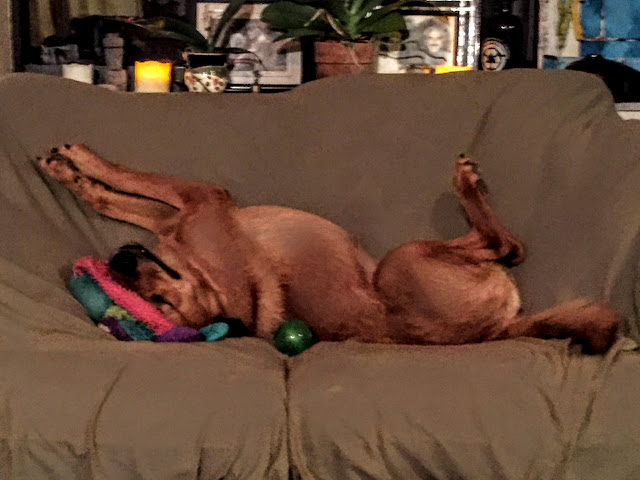 I overcame complaints that Rusty doesn't sit in puddles as Cheyenne used to by taking him for a long enough hot enough walk that the temptation was too much and he yielded to the need to cool off: 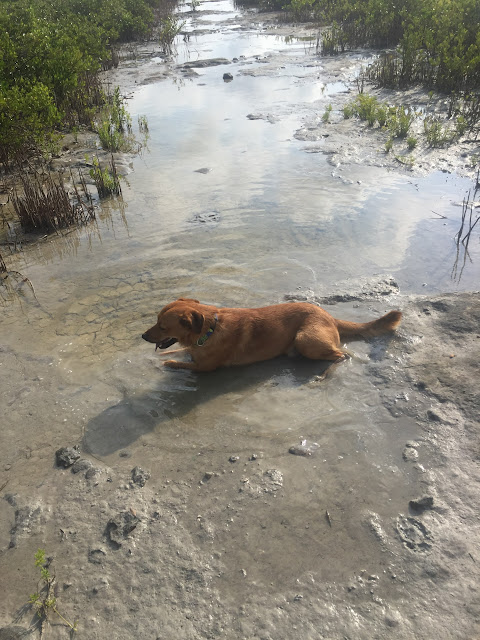 He is everything I want in a dog and I've had him six weeks. A few months ago he was ending a year long spell if not longer as a street dog in Homestead so the argument that abandoned dogs are damaged is not one he lives by. He doesn't run away because he likes being at home. In the morning he bounds down the stairs and charges into me, as happy as ever to see me. 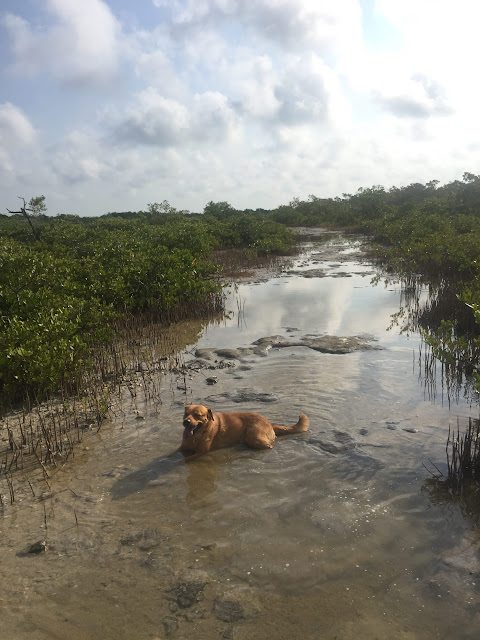 He gets me out of the house, we walk and he makes me power walk as he is young and active. He is learning to walk on a leash and though his pace is awkward as he reacts to every sound around him, we are getting to know each other. 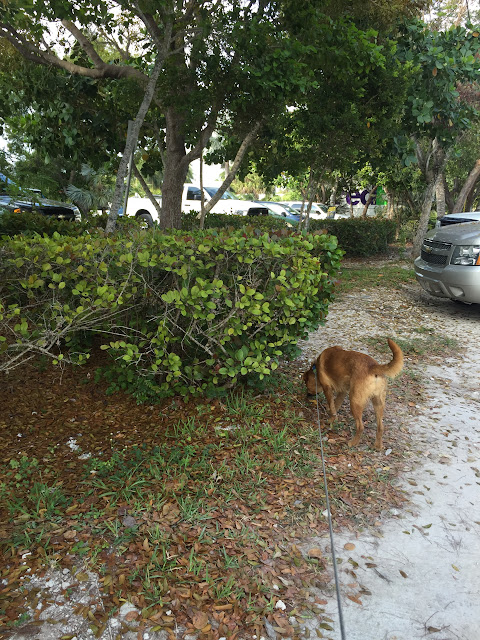 I ended a recent walk at Five Brothers on Ramrod Key where the line was unbearable. Had I not called ahead I'd have given up as the crush was too tight in the grocery store. As it was my wife stopped off for coffee to her way to work in Marathon and noticed the lunch special so I was under particular instructions to bring home dinner...so I had to suffer the lines. It was worth the wait as Cubans have a particular way with oxtail. And I like boiled yucca too. Rusty quite likes oxtail bones too it turns out, so his wait for me to finish buying lunch was worth it. 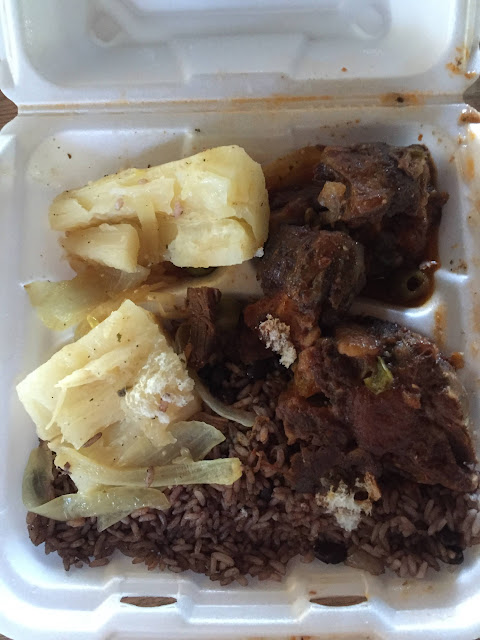 Rusty's rescuers estimated his age at 4 which means I can hope to get perhaps a dozen more busy years out of him, I'd like to think. After Rusty I imagine I may have time for one more dog before it's my turn to be put down, not the dog's so I am hoping to make the next decade worth while for both of us. 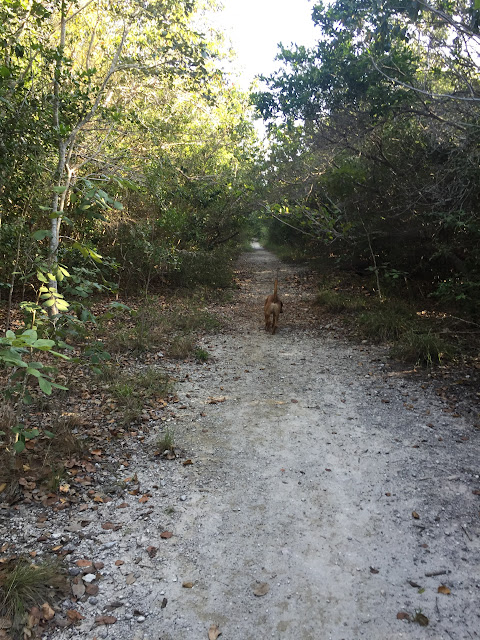 In June we are planning a three week road trip with Quebec City as our northernmost point so I have to get his passport ready from the vet and get him ready for long rides, cool days and cold nights and different kinds of woods to walk in. I expect he will have no problem adapting, because travel is now his fate and if we do get to retire as we are supposed to he will get to se more of the world than he ever expects to. I hope he likes it.