Bob Leong has died and I am quite cross with him for he had long been promising himself a trip to Key West and it never happened. He lived in Vancouver, British Columbia and wrote a cheerful popular blog describing the travails of life on Canada's rainy coast.

I am told he died in his sleep, lucky man, not in a wreck, slipping out of this life as quietly and unassuming as he lived it. He was touring Kentucky in his classic Corvette, one of his many passions, which included motorcycles, scooters and photography. He liked to cook and to eat and he illustrated his blog with recipes and food pictures, as well as his struggles with his waistline and his determination to appreciate exercise. 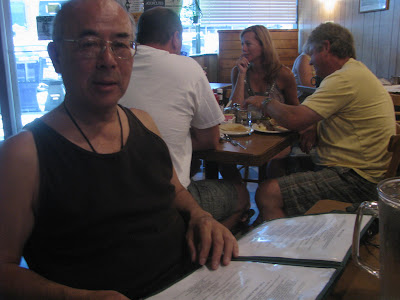 Bob had a harsh upbringing and he was proud of his "self made" status, not in terms of wealth but in terms of creating his own family and living his own life. His blog was his release and the funny guy able to laugh off his inability to evade delicious food, could by turns be coldly self reflective and amazingly open about the heartache  of his Canadian childhood. Bob also accumulated a raft of friends around North America and Europe online and in person. It was his goal to meet every moto blogger he encountered online. He was doing well on that score.
Orin in Seattle posted this:
tags: Obituaries
by Orin 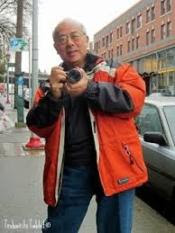 
A loving tribute to a great man, Bob Leong


The account of Bob's passing struck me hard. It was like a sudden blast of emptiness that hit me with overwhelming force and left a void where once there was Bob.

Like many in Bob's vast extended family, I met Bob through the internet. He reached out to me through my blog. First a comment, then an e-mail, then a phone call, and so it went. Bob infused my blogging experience with life. Vibrant, compelling, gritty, amazing, adventurous, life. When I just wanted to get together for coffee or lunch, Bob seized the day, two days in fact, and squeezed out two amazing mind-blowing days of moto-friendship that paid dividends I could never have imagined. 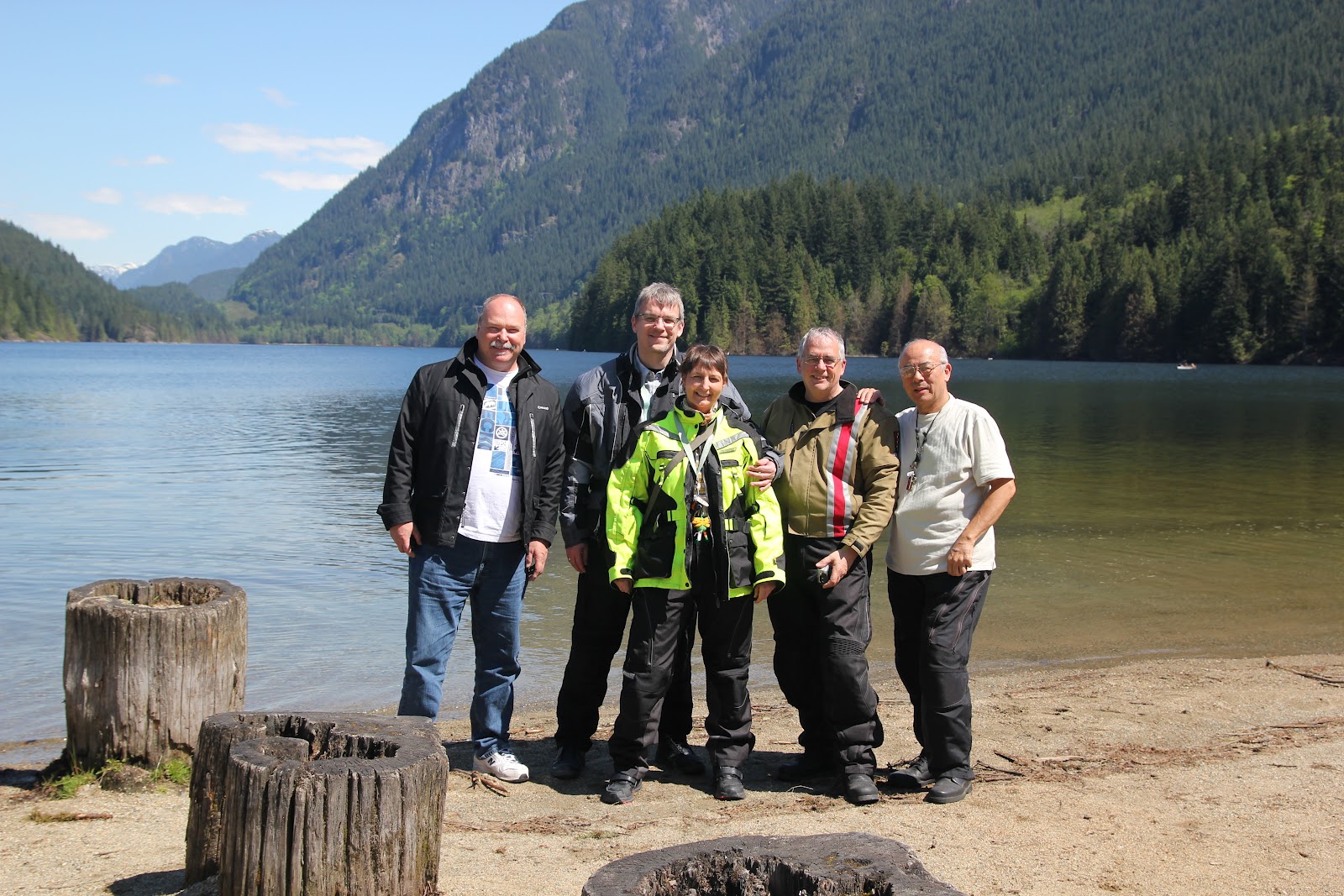 But wait, there was more, so very much more. I found myself, alone, in a borrowed tent, in Bellafonte Pennsylvania, waking to the sound of songbirds and peacocks. Magic. I was there because Bob asked me to meet him there. So I went.

Bob invited me to share slices of his life. So I invited him to share slices of mine. I visited his home, I met Yvonne and his kids. He spent a few nights in my home. He met Susan and our kids. Susan, Yvonne, Bob and I had dinner in Vancouver, and breakfast on another occasion. 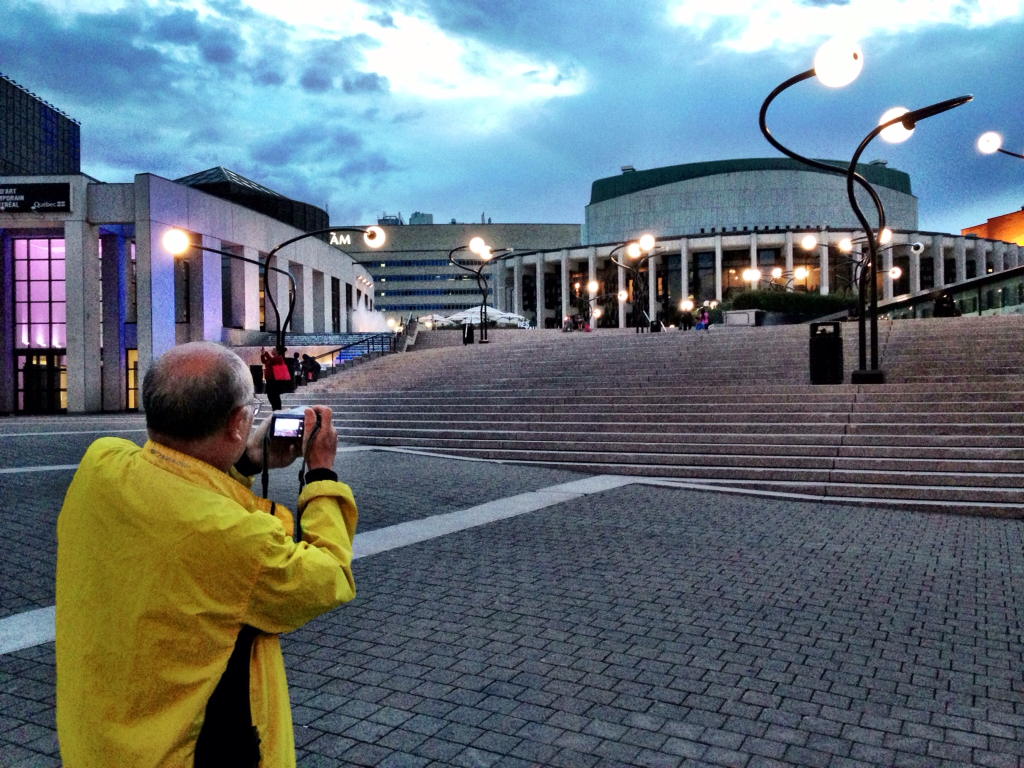 More than anything else, I was blessed to ride with Bob. Bob blessed my life in a small but deeply marking way.

Bob was truly one of the kindest, most gentle, most generous people I have met. Most importantly, he gave of himself. He made things happen.

None of this came easily to Bob. He was candid about the challenges he faced as a child. Challenges no child should face. Many of us might have fared worse in similar circumstances.

How Bob will be missed.

Now is the time for tributes. To sing the praises of one who touched our lives. A fellow being who lived life the way life should be lived. With love, generosity, kindness, and courage.

I was out early in the morning with Cheyenne and the moon was full and there's something irresistible about a full moon, so... 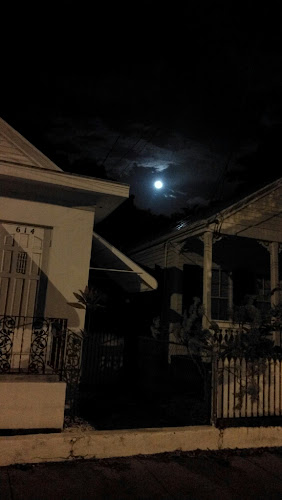 I think part of the irresistible nature of photographs that include the full moon come from the architecture in Old Town Key West that lends itself to the ghostly image of a cloudy full moon night. Even when including such banal props as a bicycle, a road barricade and something as modern as a car. 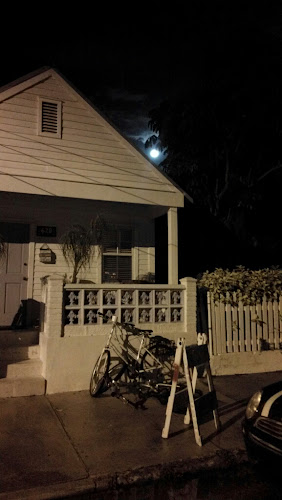 This old house at the intersection of Elizabeth and Angela and Windsor near Solares Hill is getting a make over after years of sitting there empty and forgotten. Frankly it's really getting rebuilt as there isn't much more than a shell left standing 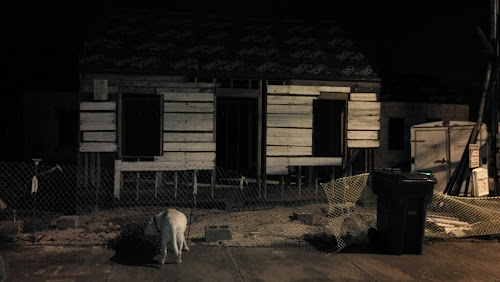 I love pointing my camera down Elizabeth Street toward Truman in the dark. I muted the colors slightly to get a more evocative tone from the play of shadows and light, after the rain. 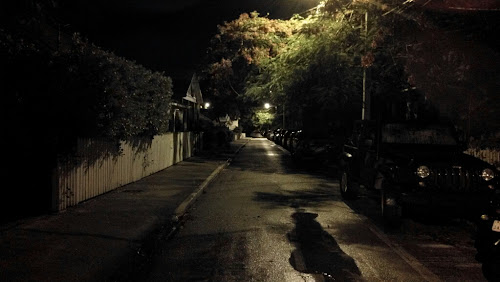 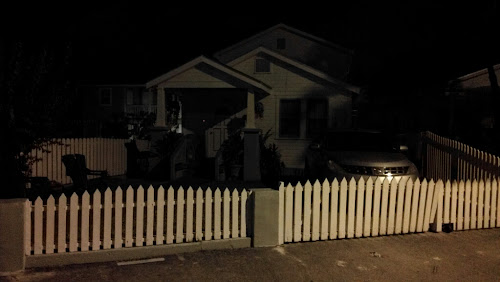 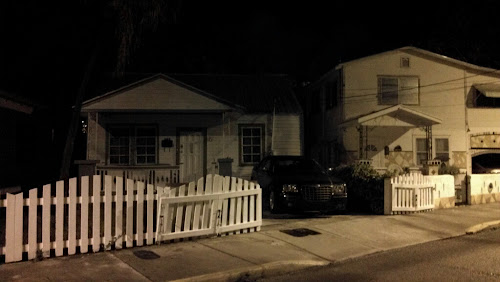 And the balconies with ceilings painted blue. They say its to discourage insects and some say that he original blue paint formula from  decades ago included some kind of insecticide component. 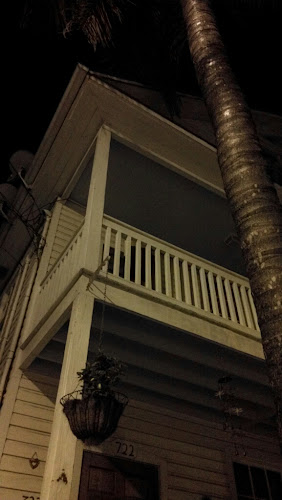 This house with the wildly colored paint job is always good for a photograph. 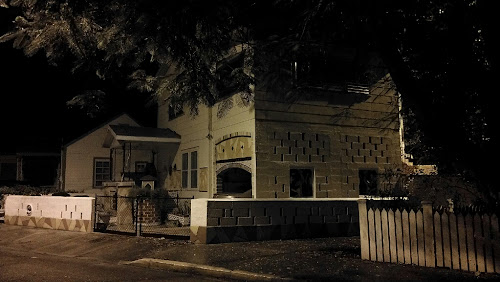 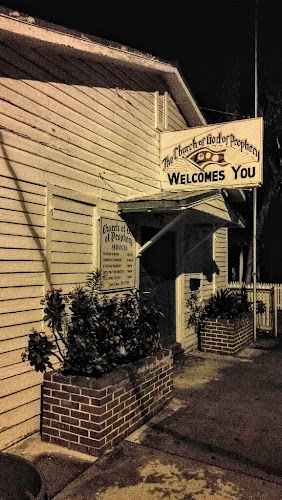 And that's a street light looking the other direction on Elizabeth Street. 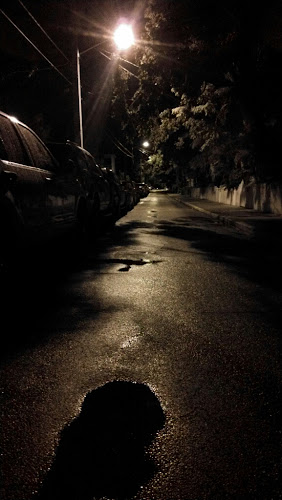 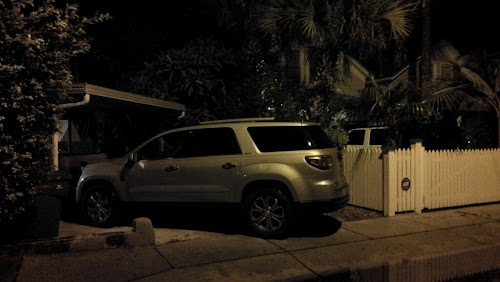 Cheyenne walked for 90 minutes, a winter marathon for my 13 year old Labrador. It was cool and breezy after the rain before the sun came up and she was full of energy. I can't imagine her first eight years before she was sent to the pound, no walks, no road trips in the car, total boredom. 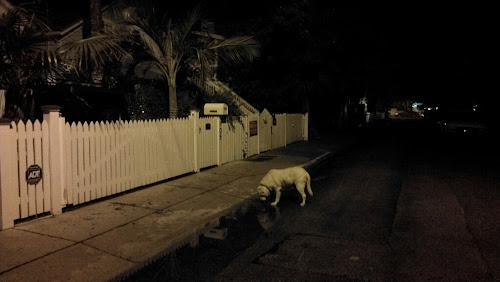