Chasing Tags On A Vespa

It's turned hot again. So there's only one thing for it, if you are a hairy Labrador; push your forehead up against something and pass out while waiting for winter to return. 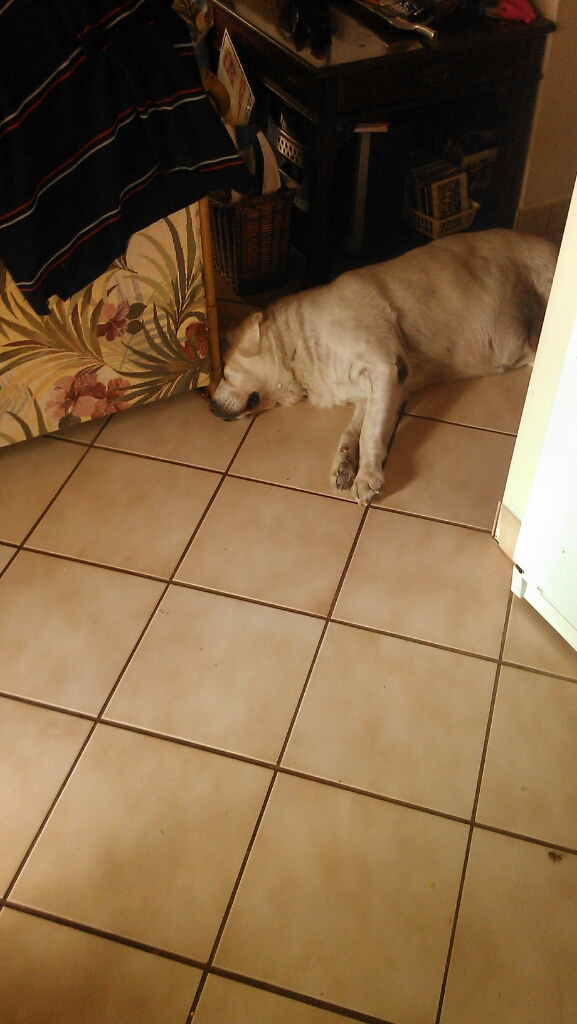 I headed out  to Big Pine Key to get some milk and to pick up a scooter tag for the ADVrider forum.I was heading to No Name Pub when I saw a vintage Yamaha parked by the baseball diamond on Key Deer Boulevard. Oooh I thought, an XS500, very rare. Trevor liked it enough he pounced on a neighbor to sell it and eventually the neighbor yielded the bike to the young enthusiast. 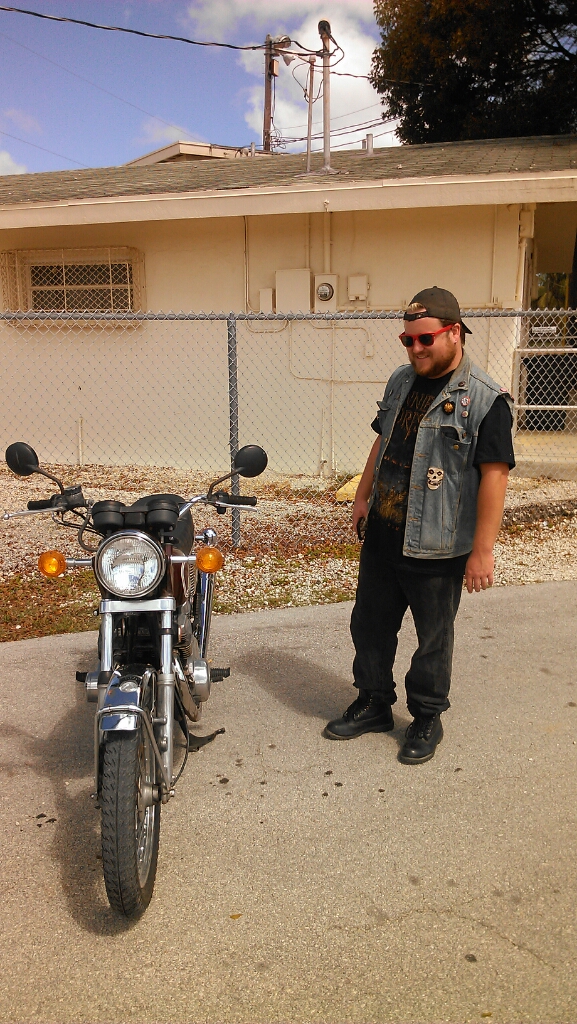 The motorcycle is  perfect, a little rusty slightly faded paint but original, unused and ride-able.  The early models were  a bit cranky and go a reputation for not being reliable so they ended up not selling well but they were quite advanced for their time. This is an extraordinary survivor lacking a little bit of oil before Trevor could get back on the road. His buddy was heading over to refill the oil tank for him. 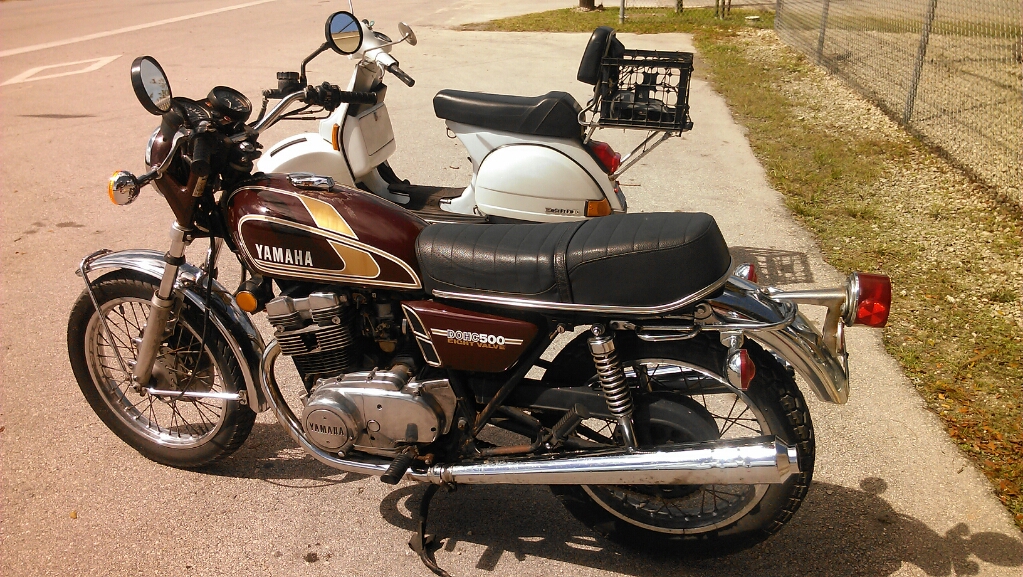 I showed Trevor over the Vespa, the spare wheel, the hand gear shift, the split rims, the flat  forced air cooled cylinder, then I took off to grab my next tag, a building with the word "pub" in it: 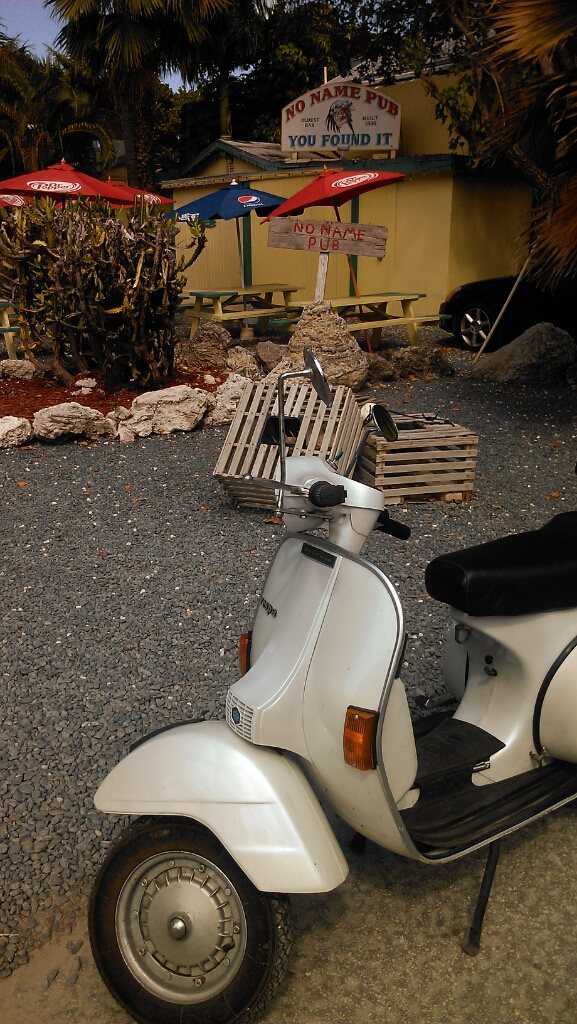 Suburbia on Big Pine: big homes, lawns, canals, a sense of order and middle class sobriety which make up this Tropical Bay Estate. 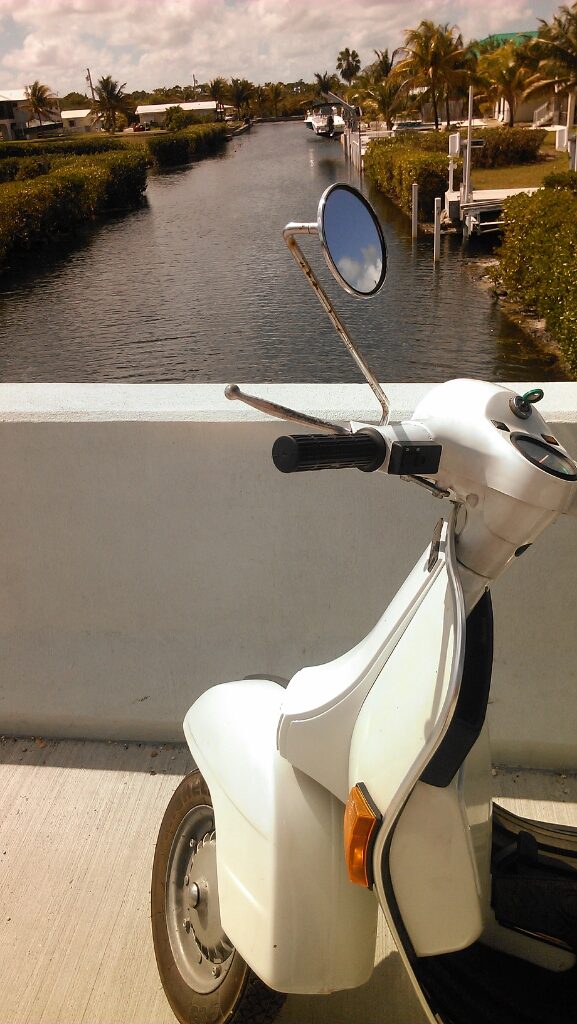 In my studies to make this Vespa reliable at high speeds I have been contemplating the mixture of air versus fuel that is in the combustion chamber as the Vespa gets hotter and faster at speeds approaching 60 miles per hour. It is a dark art but I need to get familiar with it if I don't want to burn a piston up every time I hold the scooter at full speed, a supposed 62  mph (100 km/h). So what one does is a "spark plug chop," a nerve wracking thing. You hold the scooter at full speed for  half a minute then shut off the ignition, coast to a stop and pull out the burning hot spark plug. Yum! 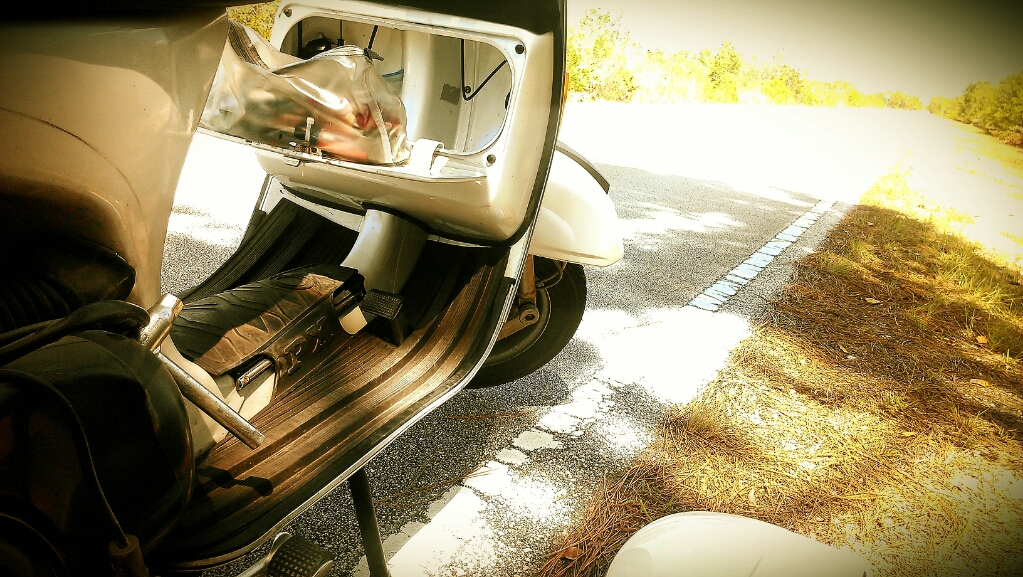 So I went out to Middle Torch Key and took off at full tilt. I timed my run to stop the scooter in the shade of the only tall tree where I played "shade tree mechanic" and took the spark plug out. As I started a couple of Harley riders came by, ignoring me in my apparent distress. That's funny I said to myself as I burned my fingers, I'll bet they wave like crazy to their fellow Hogs on the highway...but do they know enough about riding to think to stop alongside a stopped motorbike (or Vespa)? 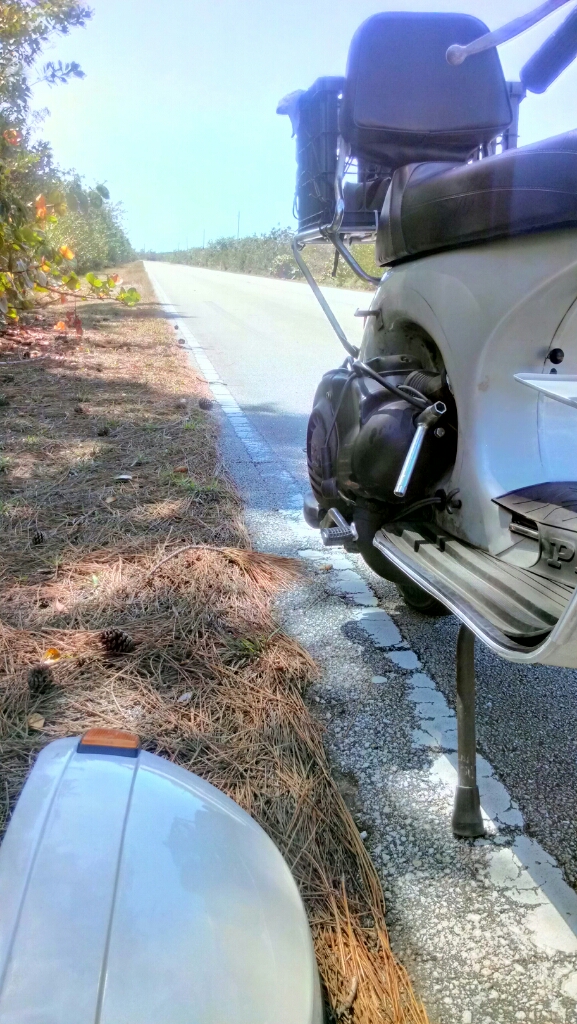 The plug was looking good, chocolate brown and a little bit oily. The mixture looks good. I tried it again on my way to work holding 62 mph for a bit. The plug was still brown but a little less oily so I increased the amount of fuel in hopes of keeping the piston cool at speed. 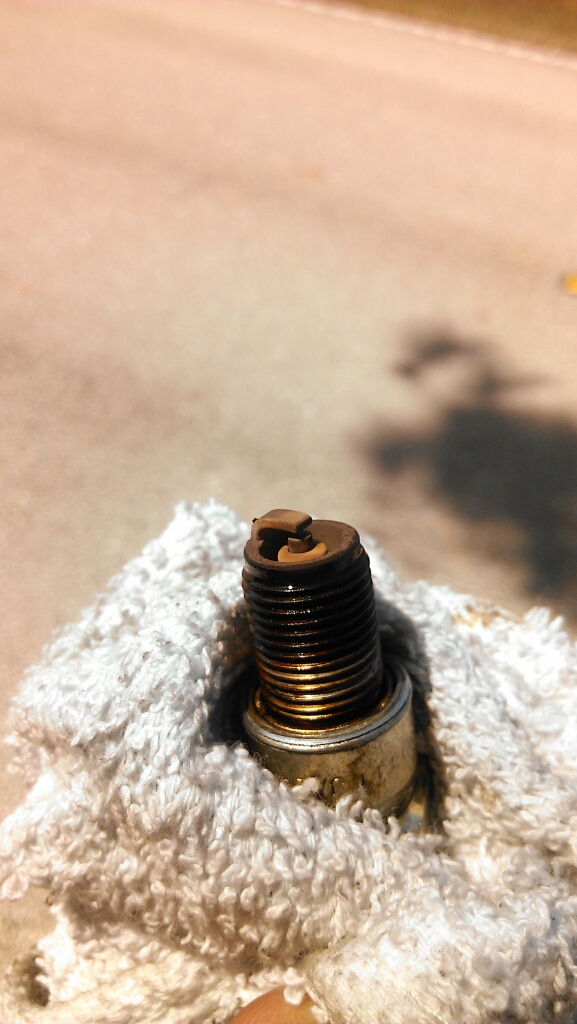 The Harley came back as I contemplated the result of my plug chop. No stopping this time either. He only looks like an old school bike rider. 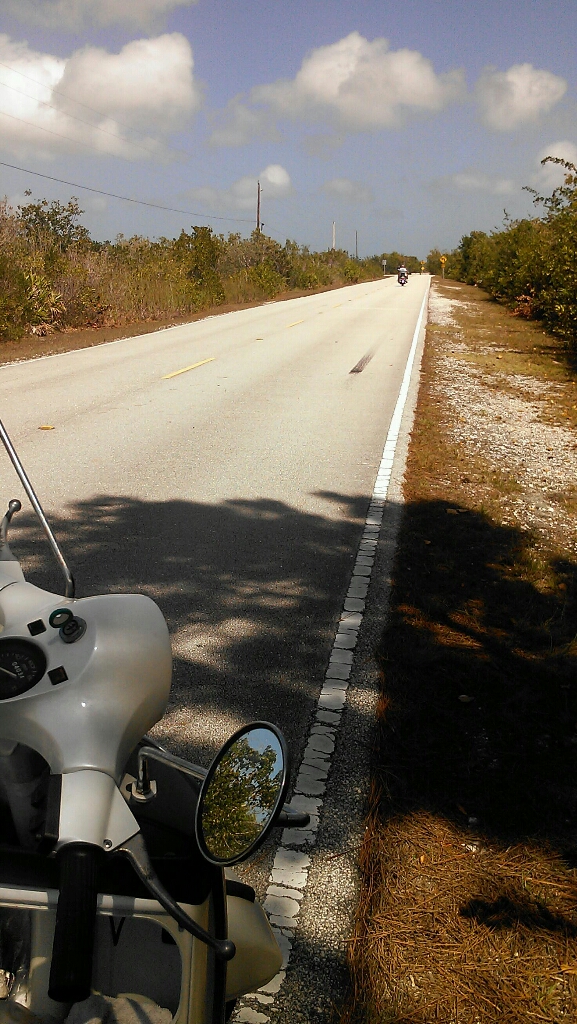 Time to ride for pleasure. At times like these variety would be the spice of life. I ride where I can and enjoy the wilderness as I can. A mountain would be nice but this is what I have: 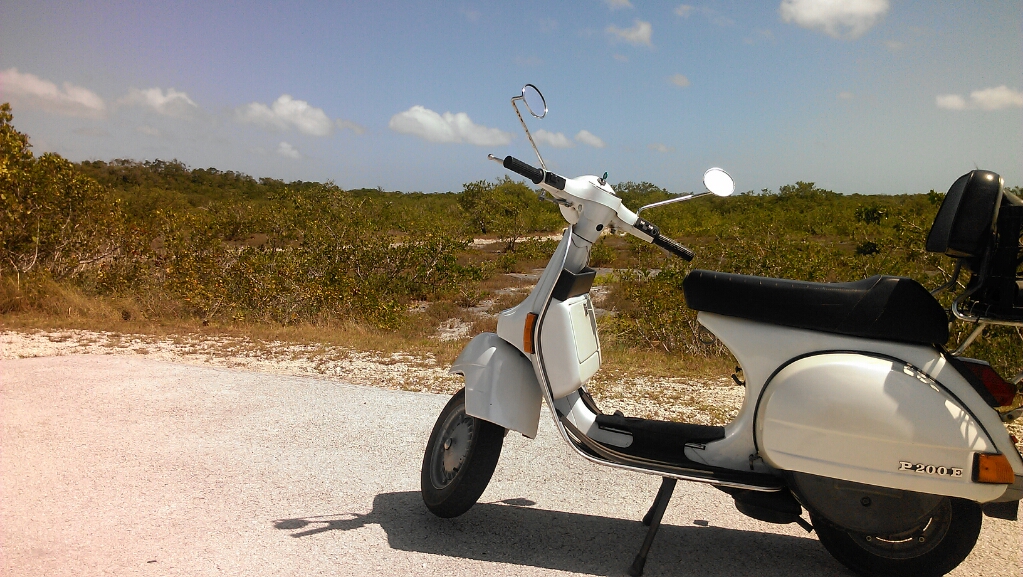 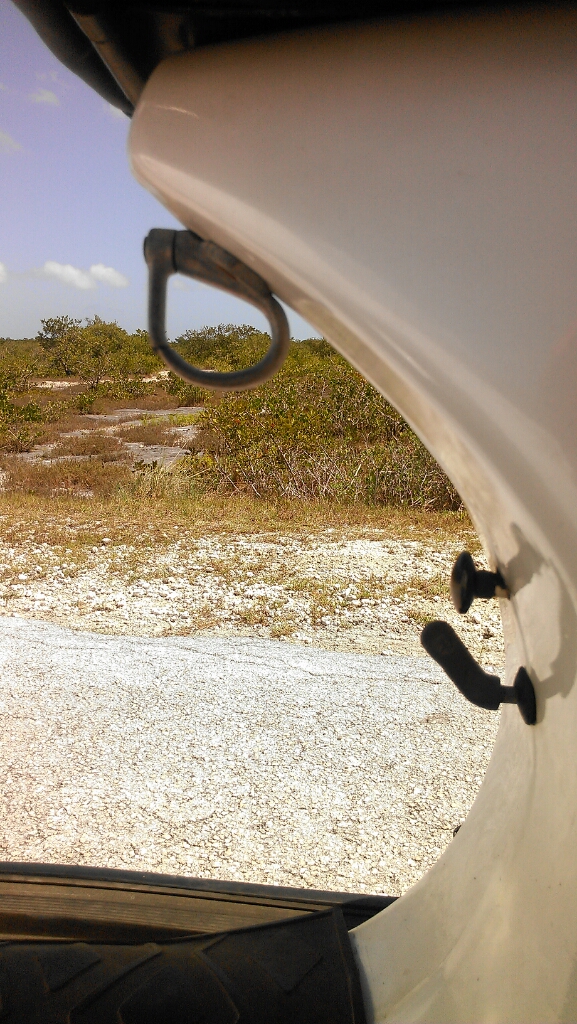 Play with the Vespa, mess with the camera and time to go home, take  a nap and prepare to commute to work. 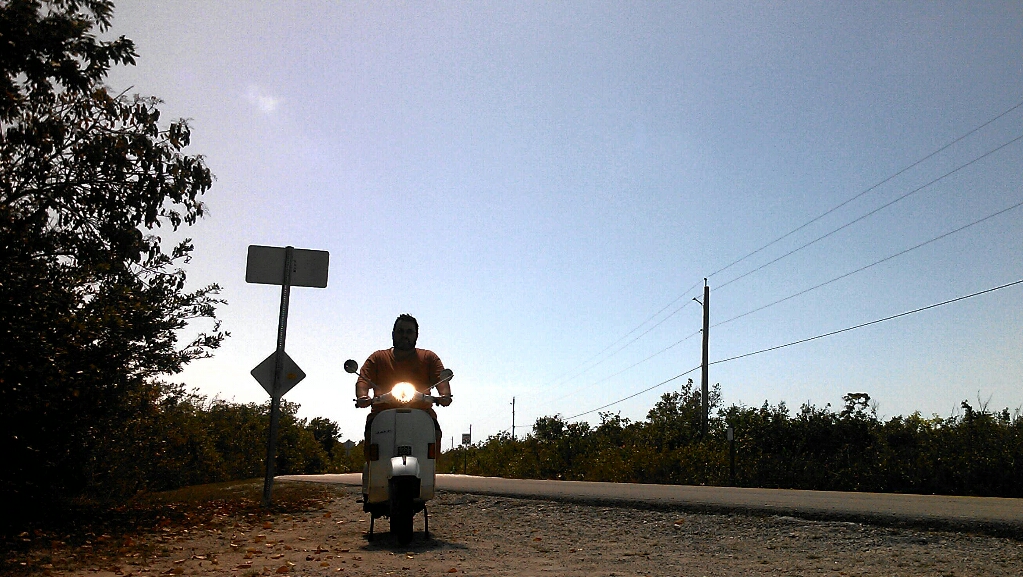 The next tag required your scooter at a sports field with the scoreboard visible. Looked good: 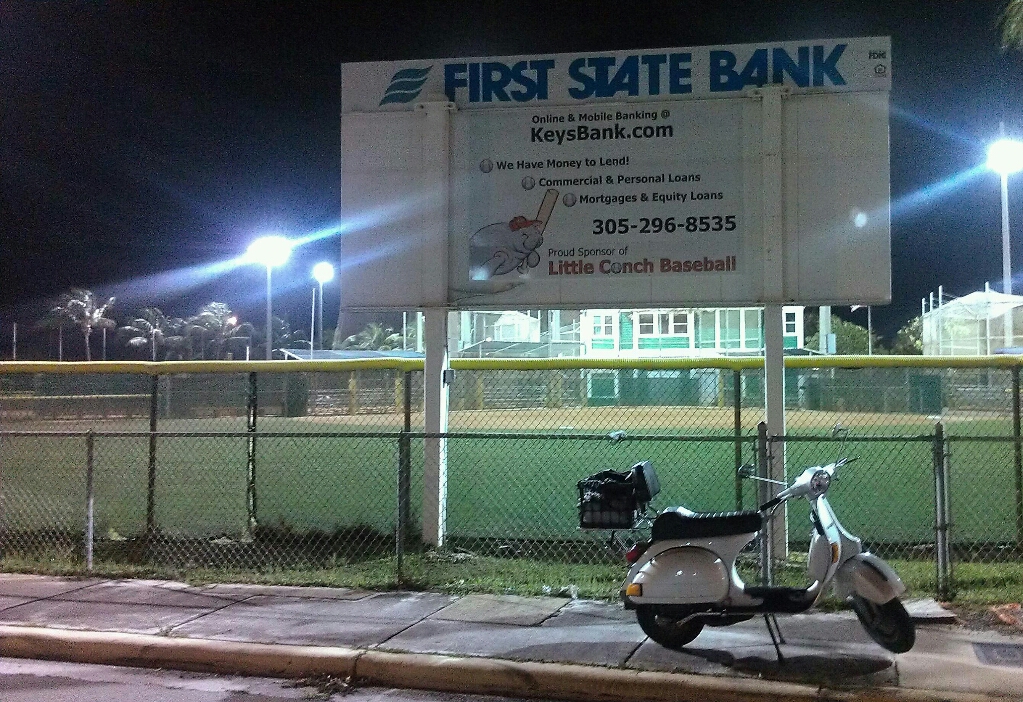 And so it goes, ride a little work a lot. Enjoy the warm night air.
Posted by Conchscooter at 12:00 AM 2 comments: