This essay first appeared June 9th, 2009 when I was wandering around the city looking for lanes to photograph. Time for it to reappear I think, because it's  still there. This is what Old Town looks like before the Historic Architecture Review Commission wrecks it:

It still happens from time to time that I come across a lane or alley that I don't remember hearing about. Quite likely there aren't many calls for the emergency services on Caraballo Lane, but I was looking for a lane to photograph and this one fell to hand on my way out of town on Eaton Street. 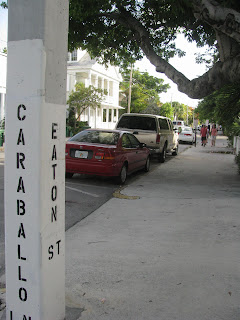 I must have cycled past it on my way to work on the waterfront in my previous life but why would I have noticed it? The entrance is marked by the two most common styles of homes seen nowdays in Old Town Key West. The old: 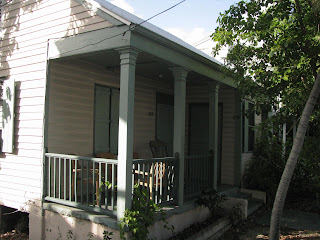 And the old refurbished in grand style: 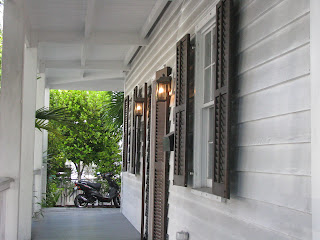 The lane is half a block long, though unlike others it has somehow resisted the blandishments of tarmacadam: 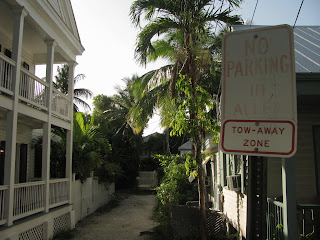 And whether it is an alley or a lane I shall leave to someone else to arbitrate. If you do choose to drive down the lane (or alley) you'd better be ready and able to back out as turning room is limited, and backing onto Eaton Street, a main thoroughfare, takes more nerves than most drivers seem to possess. The speed limit on Eaton is 30 miles per hour for some joyous reason even though visitors will frequently be seen pootling along at 12. They are on "island time" and fondly believe everyone else is too.
.
Old yes, but not out of date: 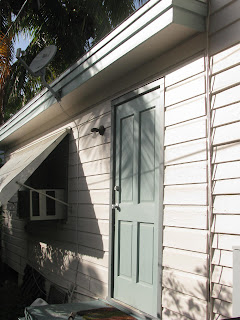 Personally I'd rather throw my money at central air conditioning than at televised advertising, but there we are. While I am in a bitchy mood (and I can't think why, if it isn't a lack of motorbikes in my life) I should point out that I am a great fan of asphalt. I have lived on dirt and gravelled roads and they suck. They create mud when it's wet, dust when it's dry and they are impossible to ride with any sense of security, though these days even asphalt roads seem to be giving me trouble. 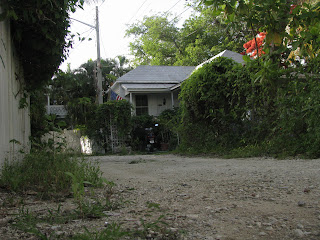 I don't feel particularly indebted to the Scots for golf, haggis or Scotch eggs, but asphalt must rate high on the list of human achievements. I know it is fashionable to denigrate roads and cars but had their critics lived and traveled in communities where it is absent they might possibly change their minds. On the other hand Caraballo Lane's slightly dishevelled air is very picturesque: 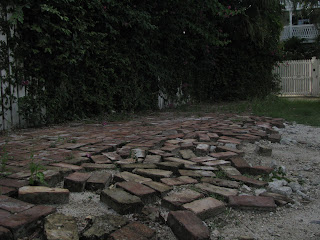 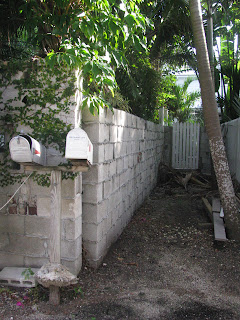 And this is the place where those preposterous safety measures called insecurity lights have been allowed to disintegrate: 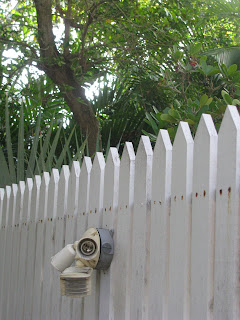 In a delightful backwater like this a stern finger wagging should be sufficient: 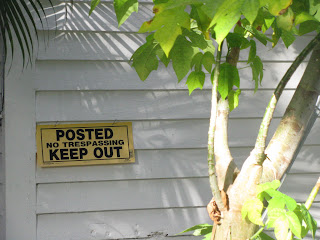 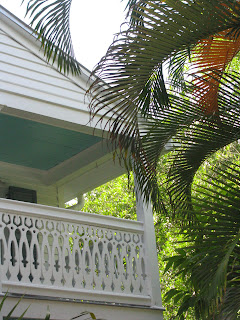 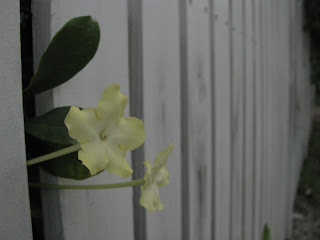 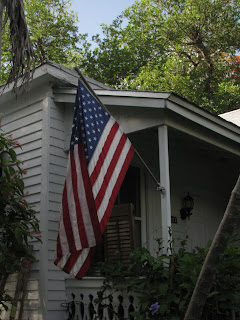 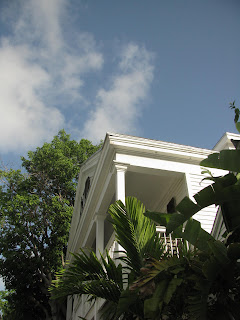 The lane also provides two major food groups for hard economic times, papayas and coconuts and judging by the bountiful fruit on my own trees we may be having a bumper coconut crop this year. I need to plant papayas judging by this bounty: 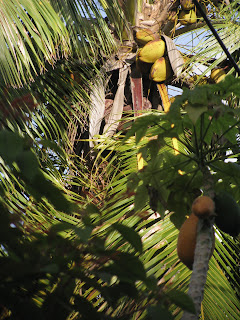 Looking back at Eaton Street: 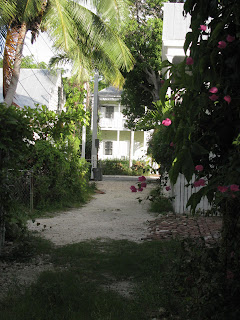 And across the street is the landmark Island City Hotel, circa 1889, with its splendid carriage entrance and gingerbread decorations: 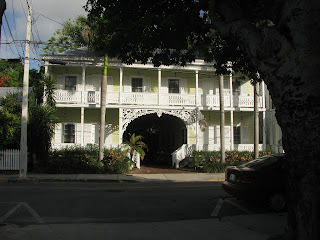 I should point out that it would be a very good idea not to mix this place up with the Island House for Men on nearby Fleming Street. One encourages a certain level of intimacy, the other doesn't. Up to you to find out which is which. Neither of which has much to do with lovely Caraballo Lane.