La passeggiata is a tradition in any Italian town and Terni is no exception, so after dinner Giovanni, his brother Antonio in the red shirt,

and their wives went walking with my wife and I and as we walked we talked, as one does.
"Would you move back to Terni?" Christina asked me. My immediate reaction would be to say not in this life, but considerations of the frailty of old age forced me to be honest about that which scares me about growing old and more frail in America.

"The only reason would be because of Layne's fragile health" I said. "American health care will bankrupt us if we have a serious emergency." She looked startled.
"What about Obama's reforms?" she said. I explained how limited they are and how the Republicans won't stop until they are rolled back completely leaving us at the mercy of a system designed to deny us care- denial of coverage increases profits.
Her puzzlement grew visibly when I explained pre-approval and hospital co-pays.
"I thought if you had insurance everything is covered?" Layne and I burst out laughing. Thanks to her RA we know all about "denial of coverage" even with our work provided insurance.
Christina's idea of a hard days work is to cash in her inheritance checks supplemented by a couple of very advantageous marriages and costly, to her ex's, divorces..

"So Americans don't want health care as a human right? They reject that as socialism?" the arch capitalist said completely floored. I shrugged and ate my ice cream, from Cinzia's, recently voted the best gelato in Umbria. The line out of the gelateria at ten pm on Tuesday was constantly growing.
"Americans are stupid," Antonio's wife decided finally.

I said nothing and finished my pistachio and peach. It was excellent by the way. 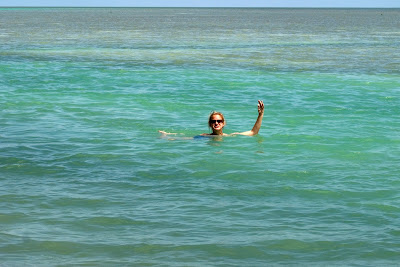 Everyone deserves a Key West vacation!
Photo by GarytheTourist.
I will return in August.
Conchscooter.
Posted by Conchscooter at 4:01 PM No comments:

The Carriage Pavilion is tucked away off the main drag in the Vatican Museums, which is great for those us us looking for it because there are no crowds in the dimly lit fantasy of astonishing wheels on display, unfortunately kept primly at arm's length behind ropes.

What the carriage pavilion reminded me of was the vast wealth of treasures the Vatican has stashed away out of sight and out of mind and of which only a tiny fraction is ever displayed. This collection of carriages, just a couple of dozen leads one to imagine all the treasures not visible.

There is a preposterous side to the pomp and circumstances of these ungainly machines, especially when one considers the appalling state of the roads in the Papal States said to be noted for poor maintenance in an era of bad roads generally, and suspension here was managed with heavy springs and leather straps.

The carriages are remarkable things for all that, lined up and ready to go.

This one has some fairly severe toe-in worthy of a sidecar outfit...

And this convertible landau was especially cute:

Here in a photo with it's owner Leo XIII at the turn of the 20th century.

I found a better likeness of the convertible Holy Father in the stamp collection of the museums, another of my favorite displays in the museum.

There were a few cars in the display as well, modern vehicles for modern times, though rather less fascinating.

An Italian couple next to me was struggling to make sense of the license plate, and I was struggling to bite my tongue but eventually they figured it out - Stato Citta del Vaticano- one of the first things you do when you create a nation is create a way to license vehicles...it's a bureaucratic thing.

Not everyone knows there is a railway station in the Vatican but they had a model engine on display here as a reminder.

The first Italian train to enter the Vatican in 1932, three years after the Vatican and Italy signed their treaty of mutual recognition, known as the Lateran Pacts.

The station at St Peter's is only used for freight and the occasional papal rider, as mass transit is not a Vatican concept. Why would it be with but 900 residents?

And who would have guessed this little tid bit?

Mangrove heaven. I love these places, all tree limbs and water and no dirt, rising straight up out of the sea like survivors of some catastrophe. Instead they are ecosystems all their own, and untenable for people. 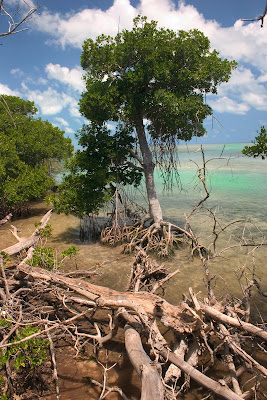 The author of these pictures, GarytheTourist, a long way away from his natural habitat in the greenery and bucolic hills of Tennessee: 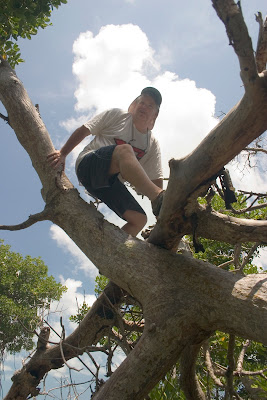 Thanks to Gary for the use of his pictures while I'm away on vacation.
Cheers,
Conchscooter.
Posted by Conchscooter at 8:01 AM 2 comments:

So there we were at last report riding our BMWs through the mountains of south central Italy trying to find lunch in the Gran Sasso National Park.

We found our way, Giovanni my wife and I to a small village called Castel del Monte (castle of the mountain) where we stopped so I could get gas, there was none in the park of course, which offers no services at all for some reason, and Giovanni could make a call and we could all get lunch.

Traveling with Giovanni means stopping to answer the phone as a matter of course. He is Terni's busiest cardiologist and in a city of 120,000 that means a lot of patients who always expect him to be available in his private practice. By the end of our ride through the mountains with no cell reception (another reason he found to lambaste the entire Abruzzo region of Italy- backward and southern) he had thirty unanswered calls and a dozen text messages.

I was starting to get pissed off at the Abruzzi too. The picture above I took at a barbecue joint where they put the trash and recycling bins, overflowing of course right across the middle of the fabulous view of the mountains instead of hidden in back...the Abruzzi would be great if the were no Abruzzesi, people from Abruzzi, Giovanni grumbled. Castel del Monte:

I like to post food pictures in the restaurants where we eat but this place pissed me off from the start. It is unfortunate but in places of low tourist interest when my wife and I come into a room and speak English heads turn. They turn even harder in sudden double takes when I speak with the waitresses in perfect Italian but most professional people collect themselves enough to affect not to notice. The woman at this restaurant affected to follow what I was saying as people at other tables threw us sly glances, but when I asked for water I got none. When I asked for dipping oil I might as well have been speaking Urdu and when I asked for roast potatoes I got fucking salad. The food was great but my mood was foul. I joined Giovanni in despising Abruzzo, the region and it's inhabitants. And he still couldn't get a cell signal. "Va fa un culo l'Abruzzi," he muttered. A pity because the place is quite lovely.

Posted by Conchscooter at 3:41 AM 2 comments: 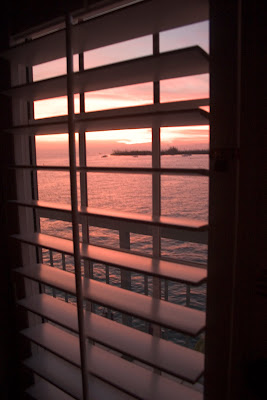 View from the Galleon. These are the views of key West only visitors get to enjoy. Thanks to GarytheTourist for his pictures while I'm in Italy with my family.
Posted by Conchscooter at 12:01 AM 1 comment: