I may have mentioned it previously but some people think I spoil my dog. Maybe but unlike a spoiled human my dog is sweet as pie even if she is spoiled. And she had a hard life before she came to me so now she's happy and I'm happy making her happy. 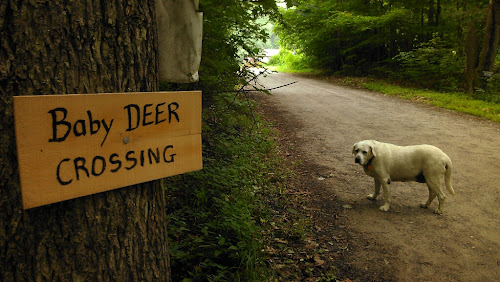 It was my fault because when she nosed her way into an electric fence designed to keep deer out of a vegetable garden I was too busy photographing a bath tub masquerading as a rather nice water trough. After that yelp she decided she wanted to go for a walk somewhere else so we went back to the car and she made it clear she wanted to go someplace by car, thank you. What would you have done? 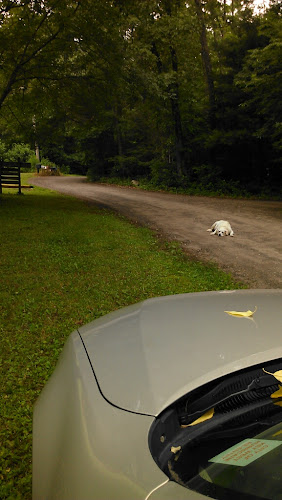 The fact is I also wanted to pay at least one brief visit to that wonder of government construction, the Blue Ridge Parkway, ten short minutes from my brother-in-law's home. Highway 80, the road that crosses the Parkway here is a fantastic motorcycle ride. 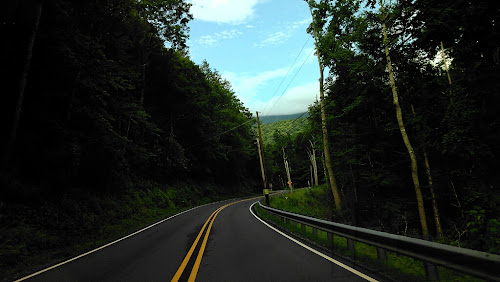 I saw a Top Gear episode where Clarkson and his sidekicks decided to drive muscle cars on the Blue Ridge itself. I did wonder what they were thinking as the speed limit here is never more than 45mph...and in fact they soon quit the BRP for a Nascar track as I recall. Speed is the underlying theme of that deliciously irreverent car show. 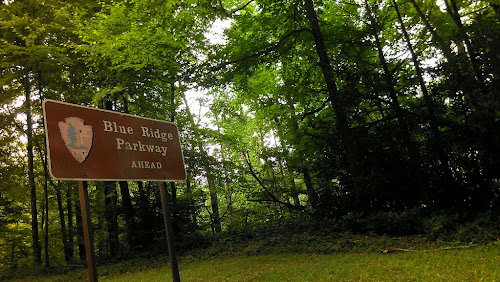 The BRP was built in the first Great Depression in the 30s and the standard of stonework on the bridges, tunnels and parapets reflects the values of the era. 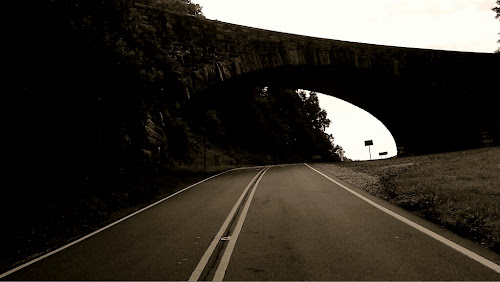 It's a fine spot this, full of trees, views, twists and turns close to the big mountain. Key West Diary: Mount Mitchell from 2008. 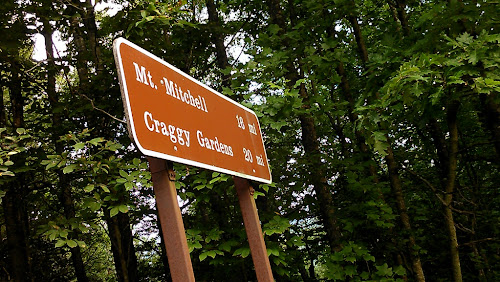 Splendid views too. This road is a slow drive, and fun especially midweek with less traffic. I've ridden most of it, and not always restrained to 45mph, and I highly recommend it as long as you accept it for what it is, a federal park, enjoyed on the honor system which is refreshing in our Al Quaeda obsessed police state. You get on where you feel like, drive as much as you want, park and rest, enjoy the occasional exhibits and deal with the culture shock when you exit and face billboards, trucks, traffic lights and speed, all prohibited on the Parkway. 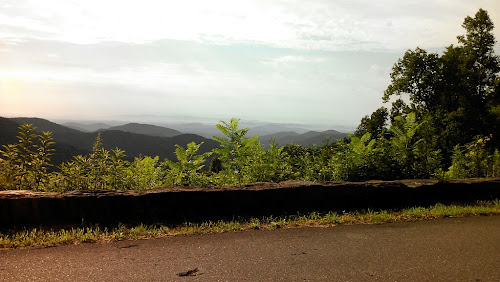 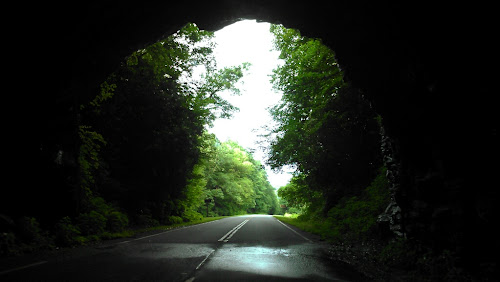 Harley rolling road blocks are the norm here, mixed in with plodding Goldwings, so this is their natural habitat. Enjoy!

I wanted to go for a walk and Cheyenne agreed to check it out with me. Very decent of her I'm sure. 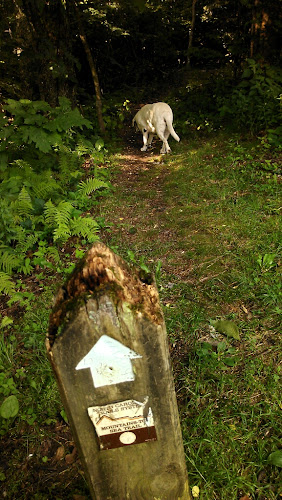 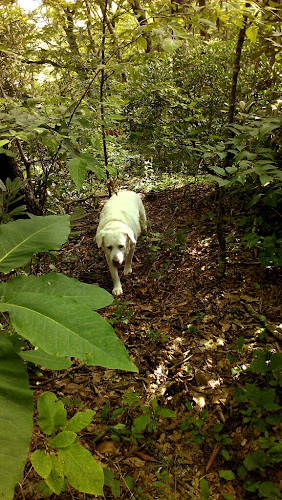 She went as far as she wanted, then she stopped. I sat on a convenient log and she plonked down next to me. I was as far from the Keys as I needed to be, in no hurry to get back to flat vistas and salt water. 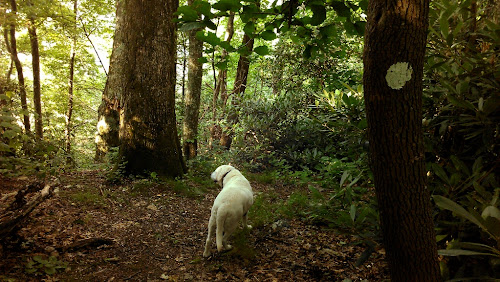 After a half hour of climbing twists and turns we came back to the perfectly manicured lawn in the overlook. I got out a Kermit chair and my Kindle on my phone. Perfect! 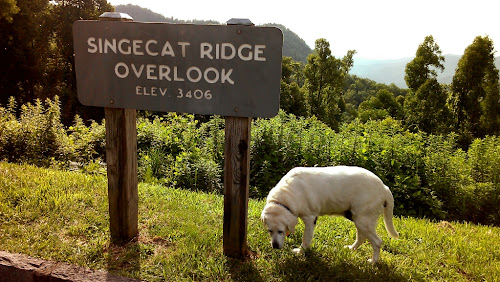 Cheyenne sank into the grass and passed out until the phone rang and the wife ordered us back to Celo for breakfast and packing. 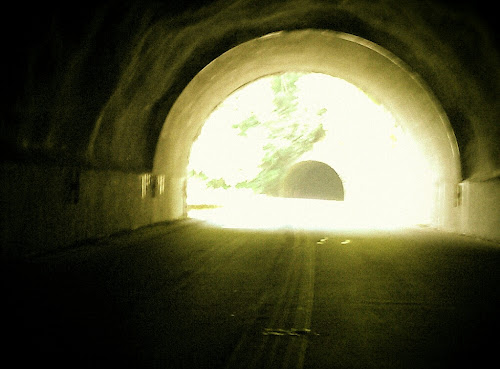 You owe yourself a ride on the BRP one day. 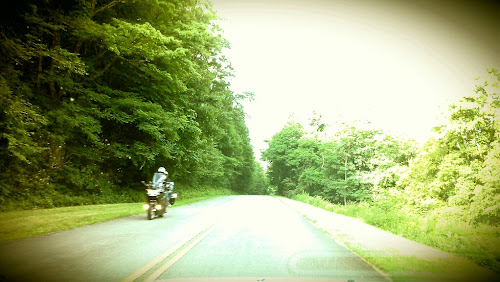 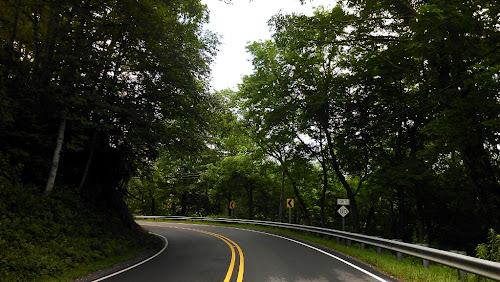 We enjoyed New England with it's forests and mountains, but this part of the world is, frankly just as good with the addition of better weather and friendlier locals. Luckily it's also much closer to home! And my wife's family lives here!! How lucky is that?