One firm date we had when we left Key West on October the 25th was to be in Tennessee on November 20th. We made plans to visit friends all over the southeast as far north as Chicago, but those stops were circling the place and date that was firm in our minds. We made it on time and in one piece. 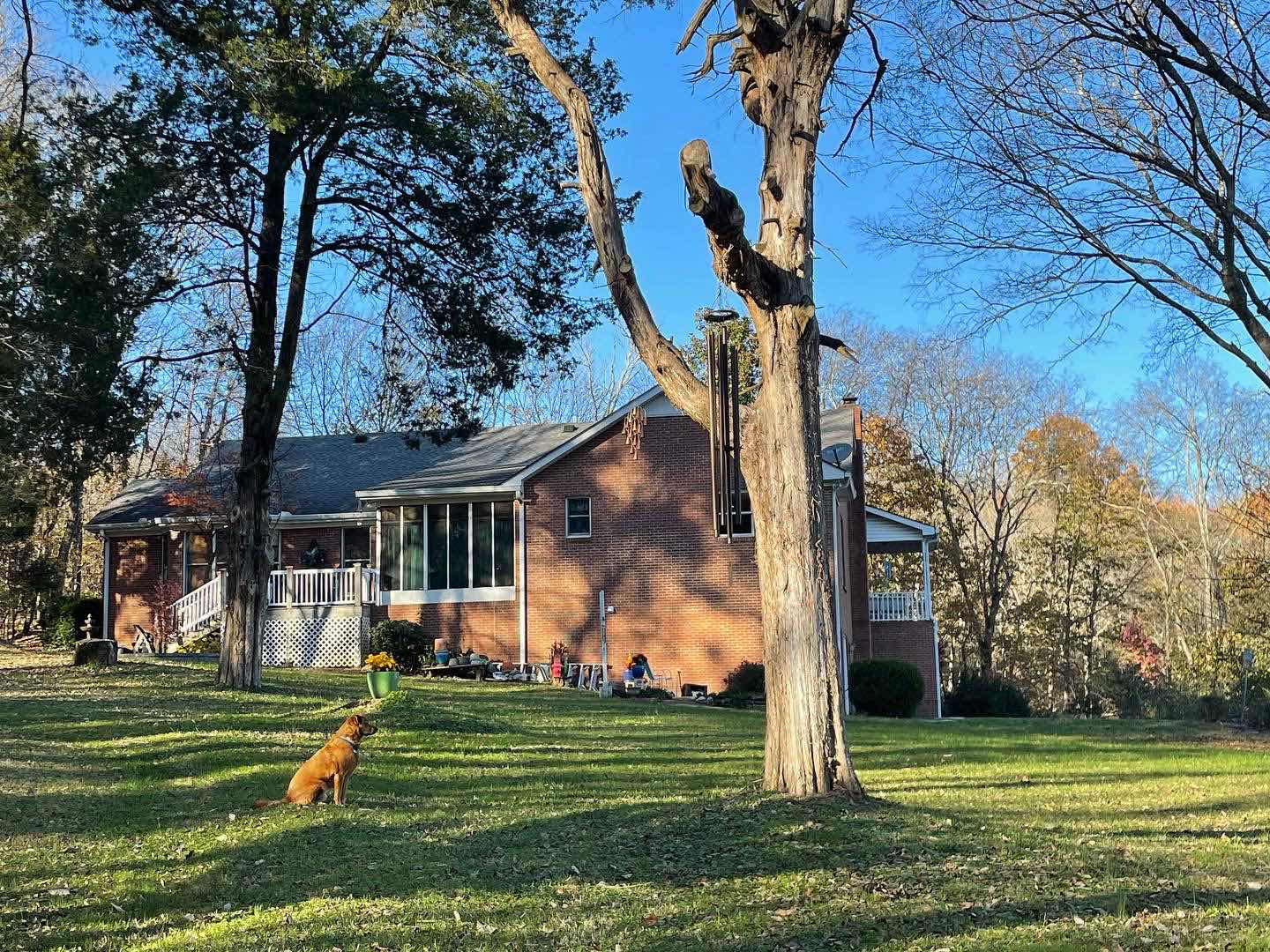 We pulled up at Barbara and Gary's place and parked where seemed natural. GANNET 2 stayed put for two chilly nights. The house was full, there was no room at the inside, so we stayed in our own manger which we had brought with us providentially. Gary helped us plug in so we ran our electric heater all night. We are not much good at heroics. 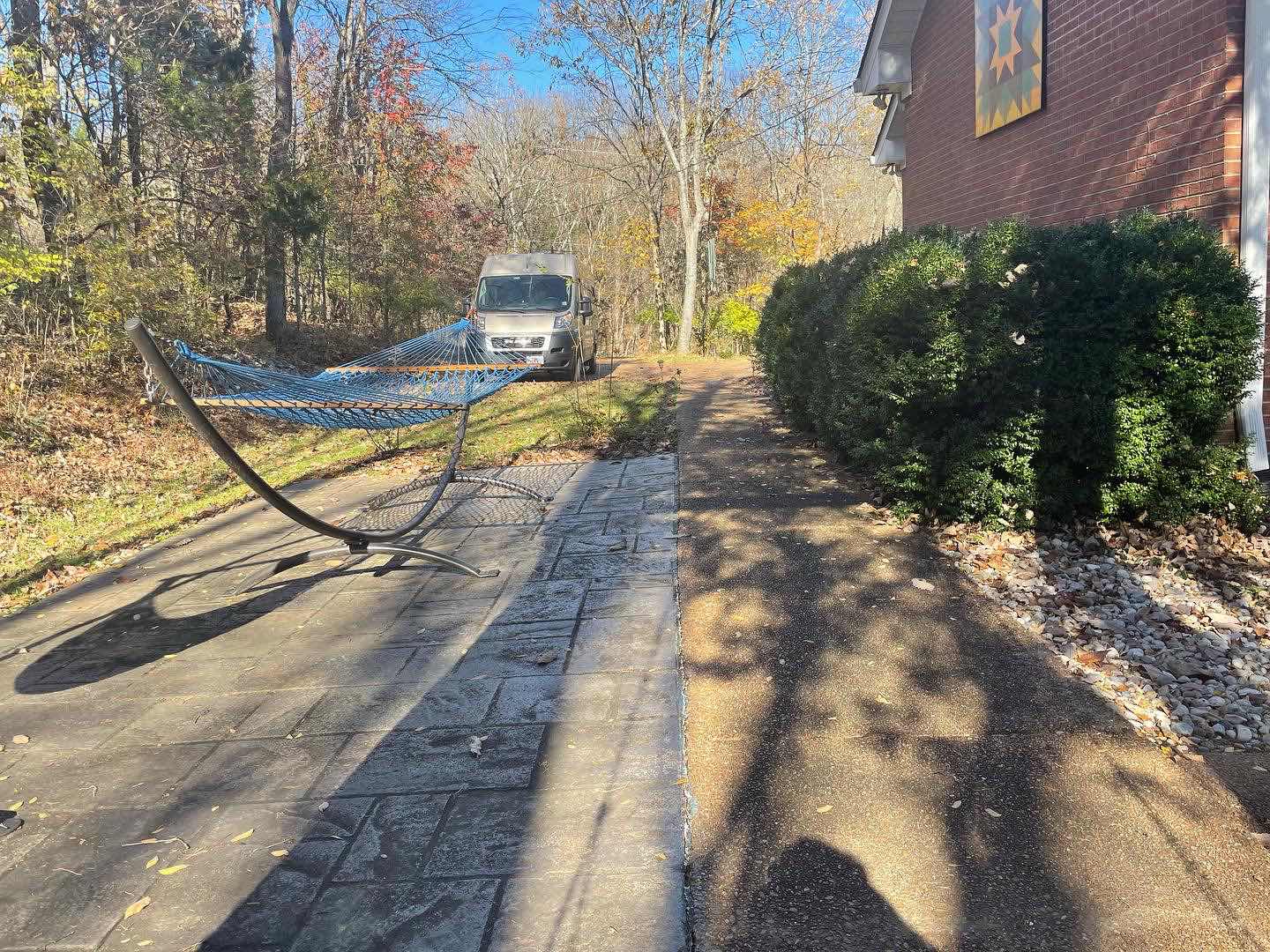 It was cold, crisp sunny and happily wind free, but our old friend Jack Frost, first encountered in the foothills of North Carolina, was back. 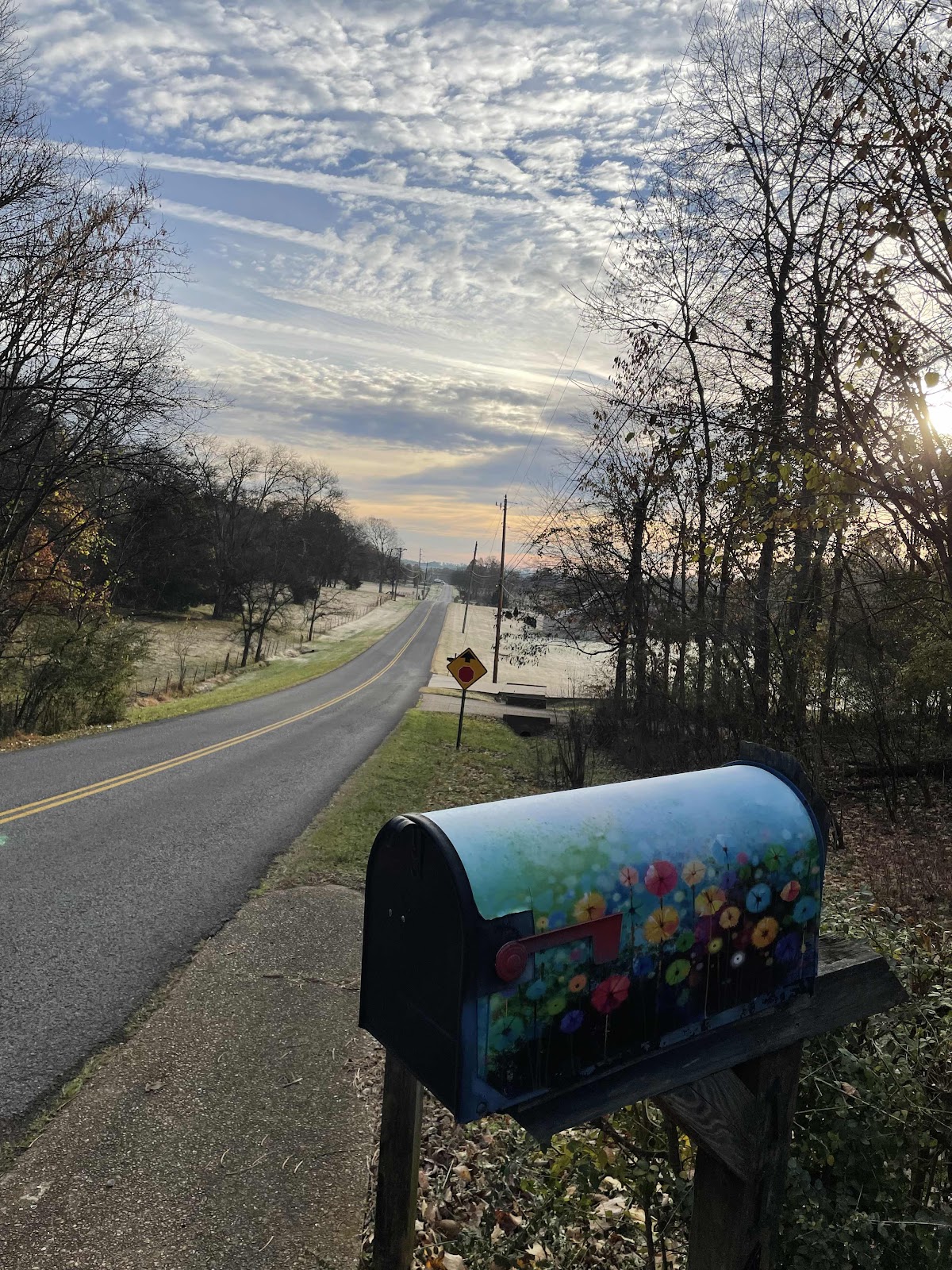 Conditions were perfect for a coat of white early in the morning as Rusty renewed acquaintance with the backyard not seen in three years. He spotted some deer across the road which is actually a perfectly formed private driveway among this collection of scattered homes, but the deer pretty much made him look a fool, disappearing before Rusty got even close. 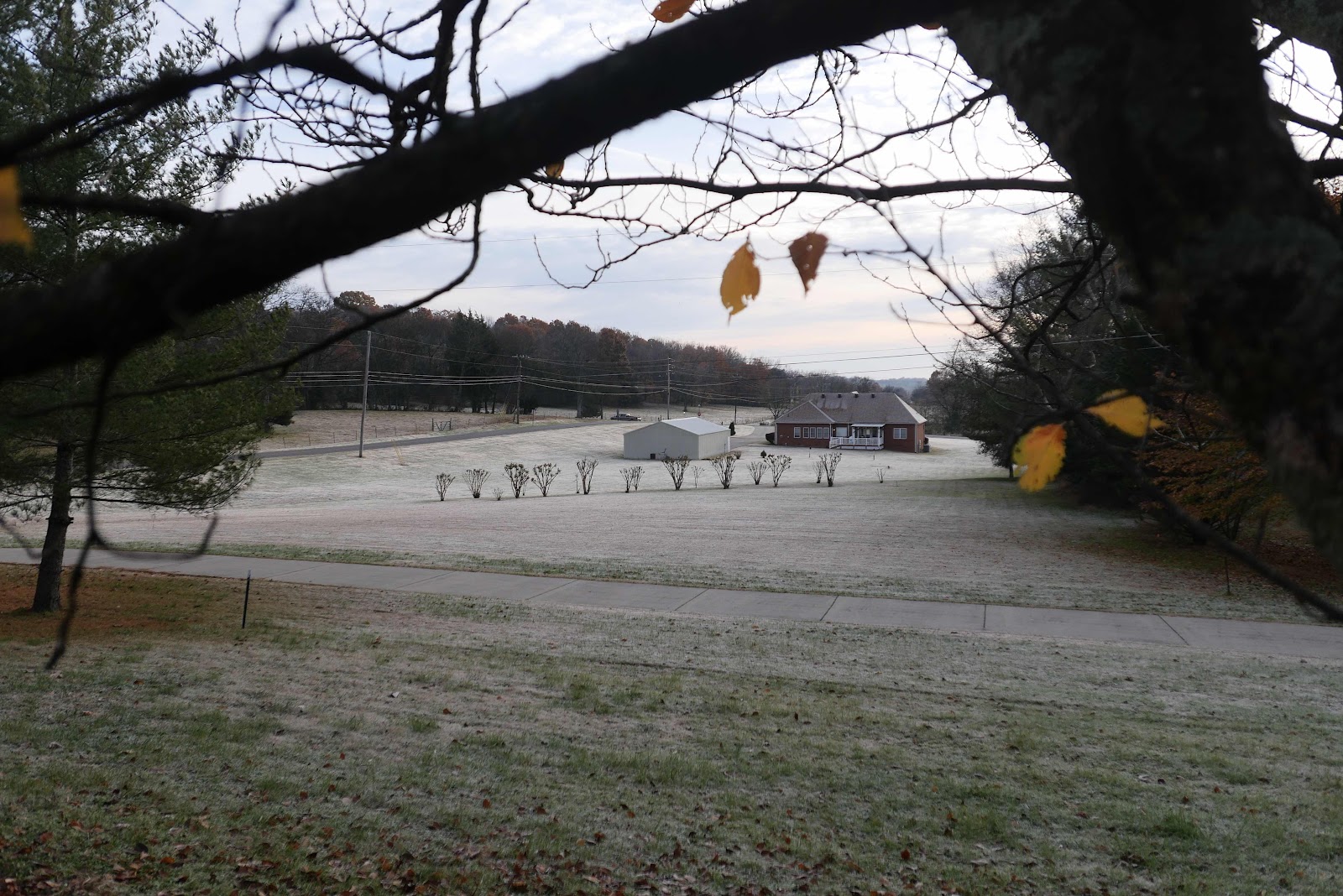 There was work to do. Gary and Barbara have a family tradition of creating a special holiday to attract family members to their home at least once a year, en masse, to see each other in one place. You can imagine my social anxiety was in high gear at the thought of fifteen strangers round a table and me struggling not to spill sauce on my formerly clean shirt. 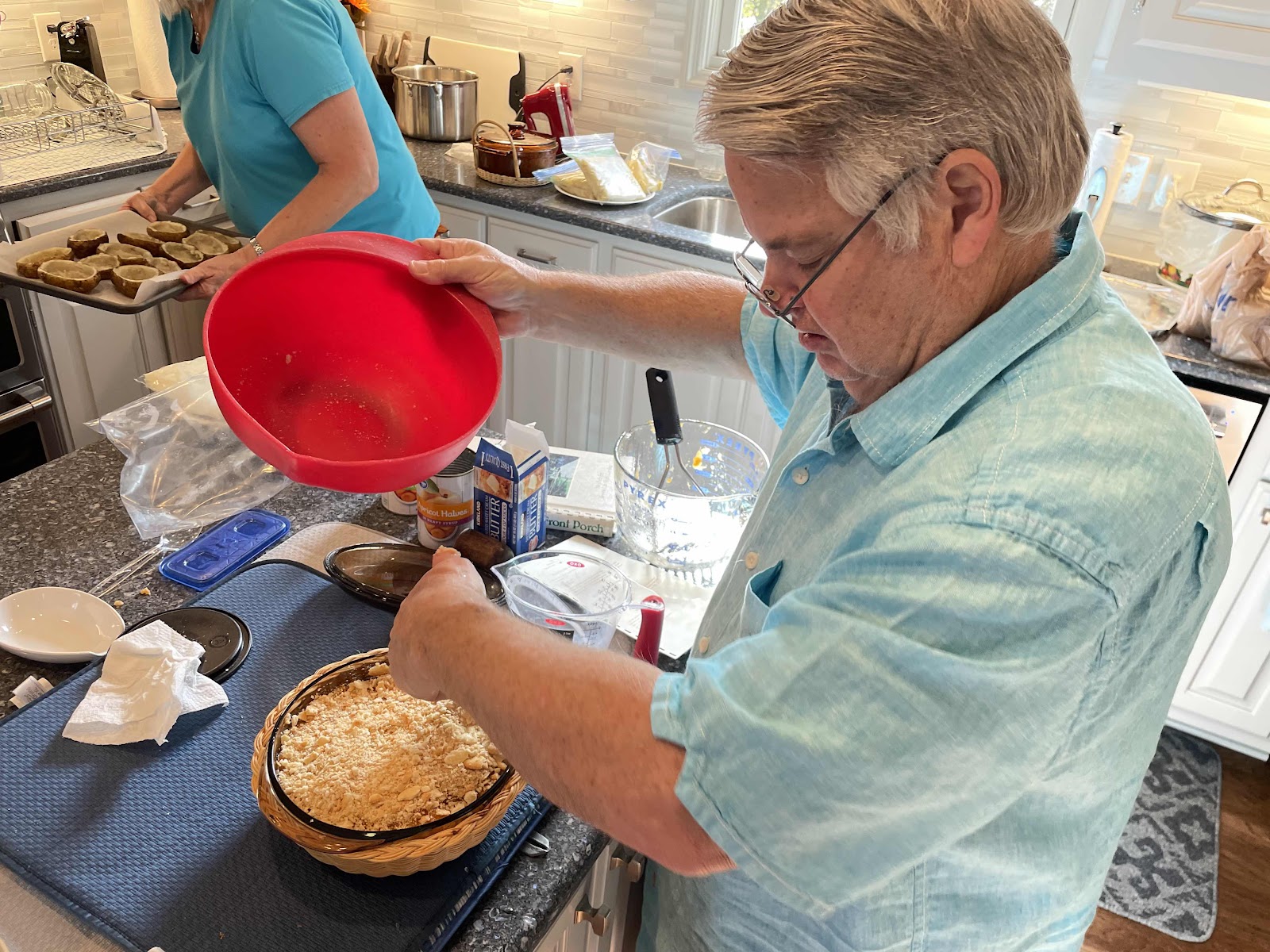 The whole thing is actually much more relaxed and after Gary spent time beating it into me I felt surprisingly at home. It is an annual tradition to have Thanksgiving a week early, on the Saturday before the day everyone else celebrates. It sounds bizarre but if you stop and think about it, it's brilliant. Your family and friends get together and then everyone spends the actual day as they wish. 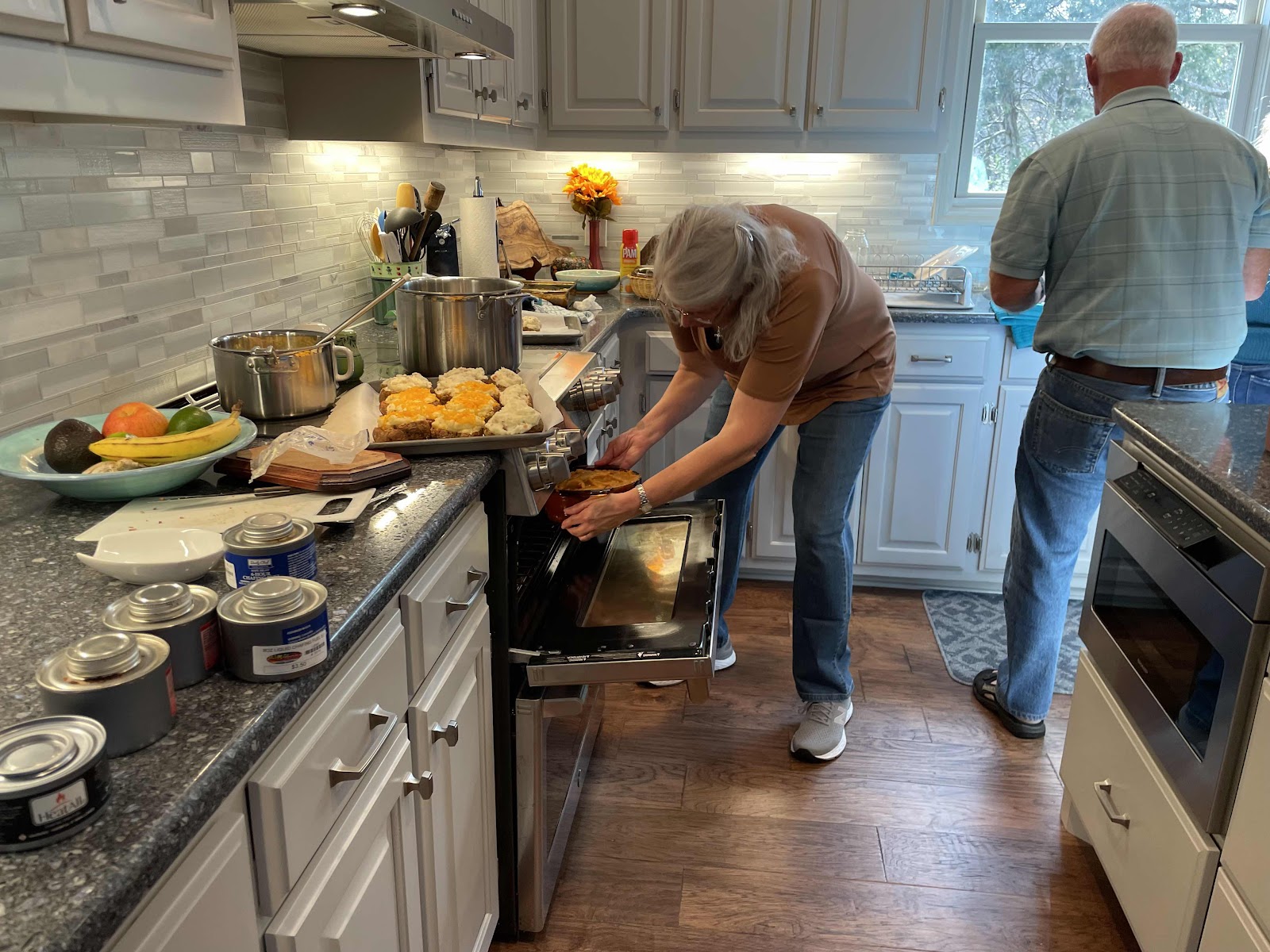 However let there be no doubt the preparations for the lunch are as intense and heart felt as the real thing and being a stranger in a kitchen operating like a well trained circus acrobatic team leaves little room for the fumbly newcomer to risk cocking something up. Russ records the event for posterity while his niece Caroline directs operations. Seconds later Russ was up to his elbows in the sink and Caroline was chopping bacon into bits. You can't join this circus unless you manifest many useful skills. Better to be a bystander. 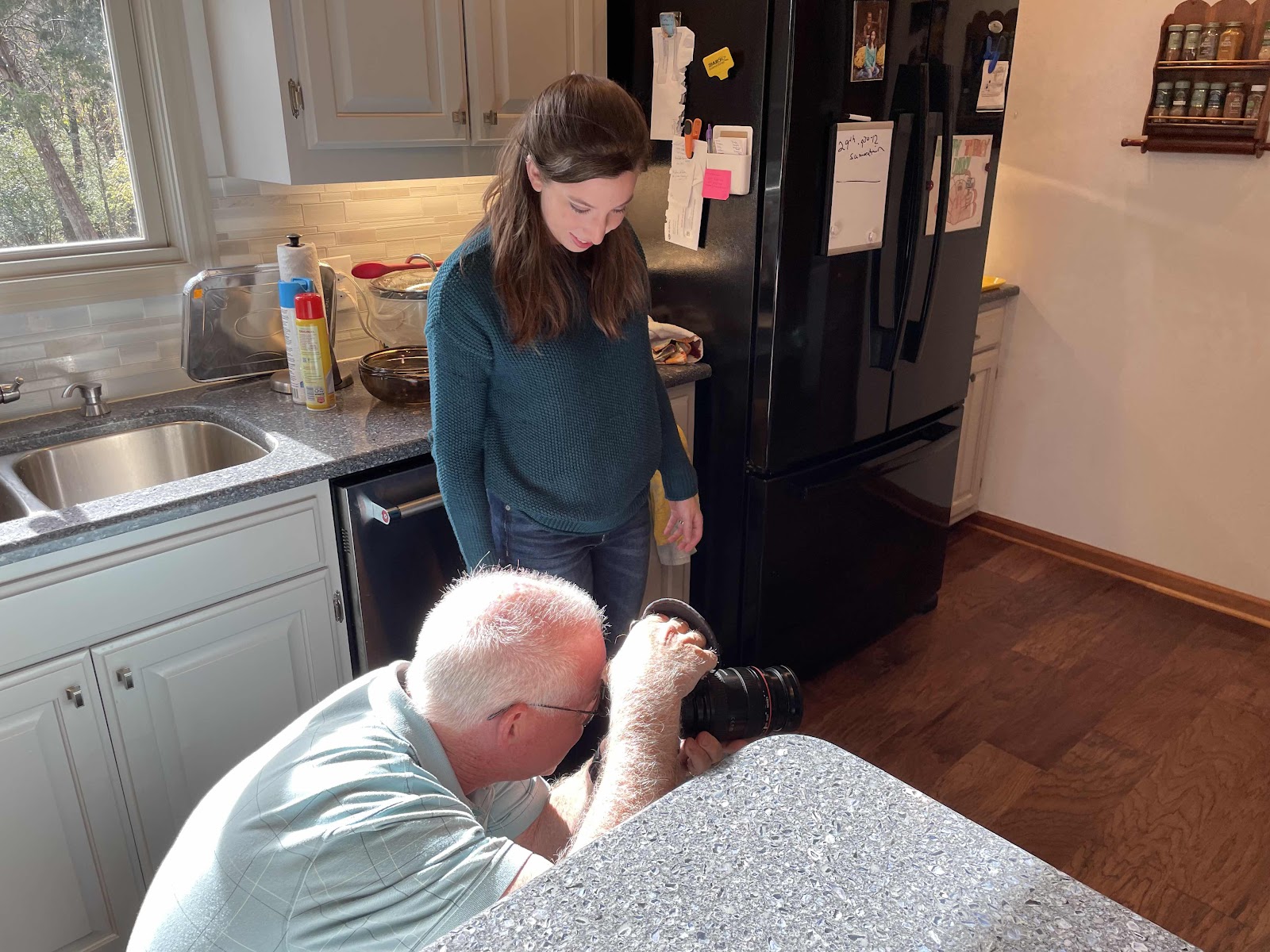 Layne entertained the troops while Rusty managed his social anxiety in his own way. Layne, much to my surprise found some deep interest in our tin box and ended up showing one of the family how we live. I find it hard to explain the fascination of being a nomad but I hope we pulled off at least the facade of a not too weird life to people rooted in their soil and their communities and the closeness of family. 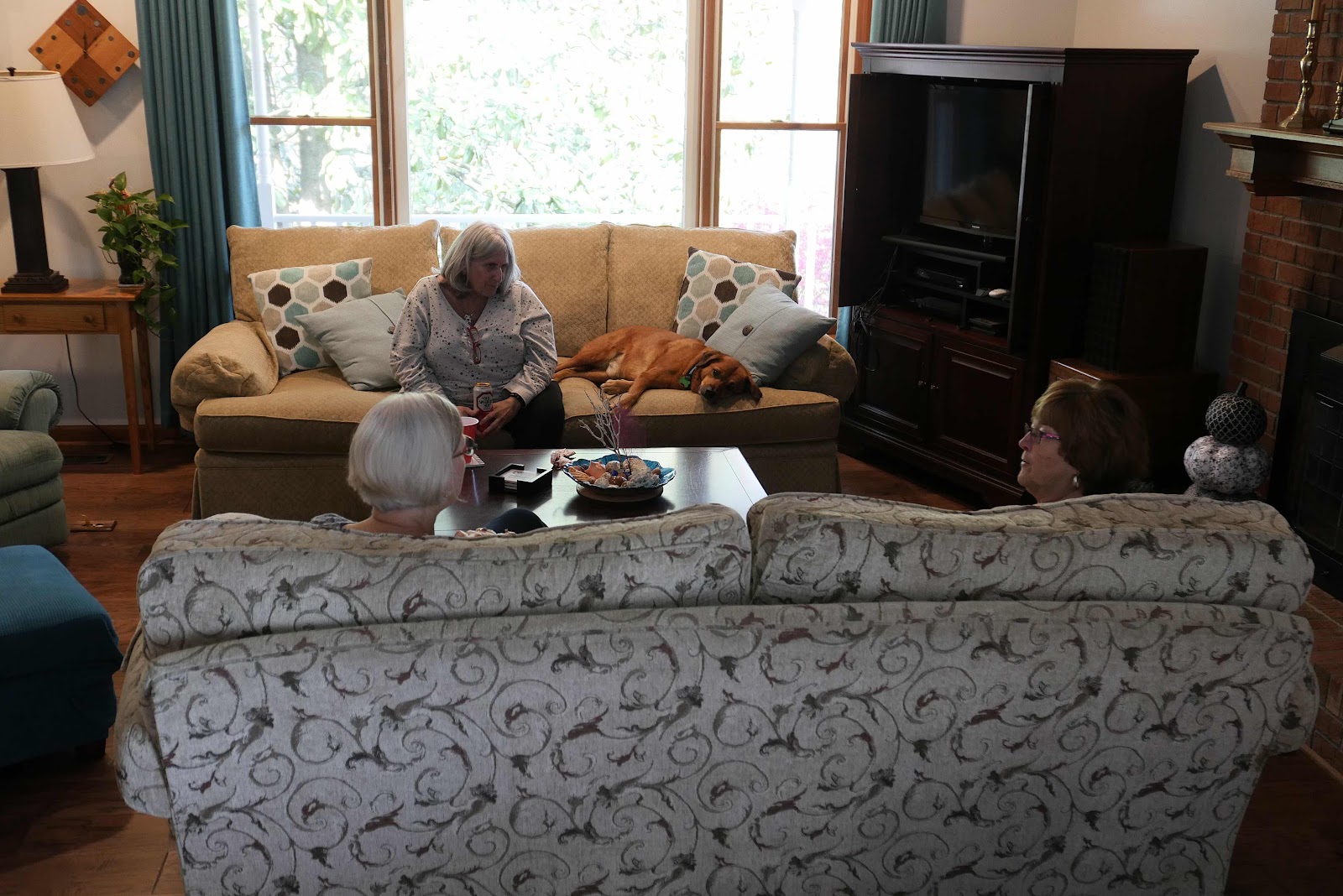 These pictures I trust will show the normal Thanksgiving chaos especially in a family that cherishes dogs. I have no doubt most of you are familiar and will be intimately familiar in a few days with a similar dance. These people carry it off so well I got completely confused, more so than usual, and spent two days thinking it was Thanksgiving. 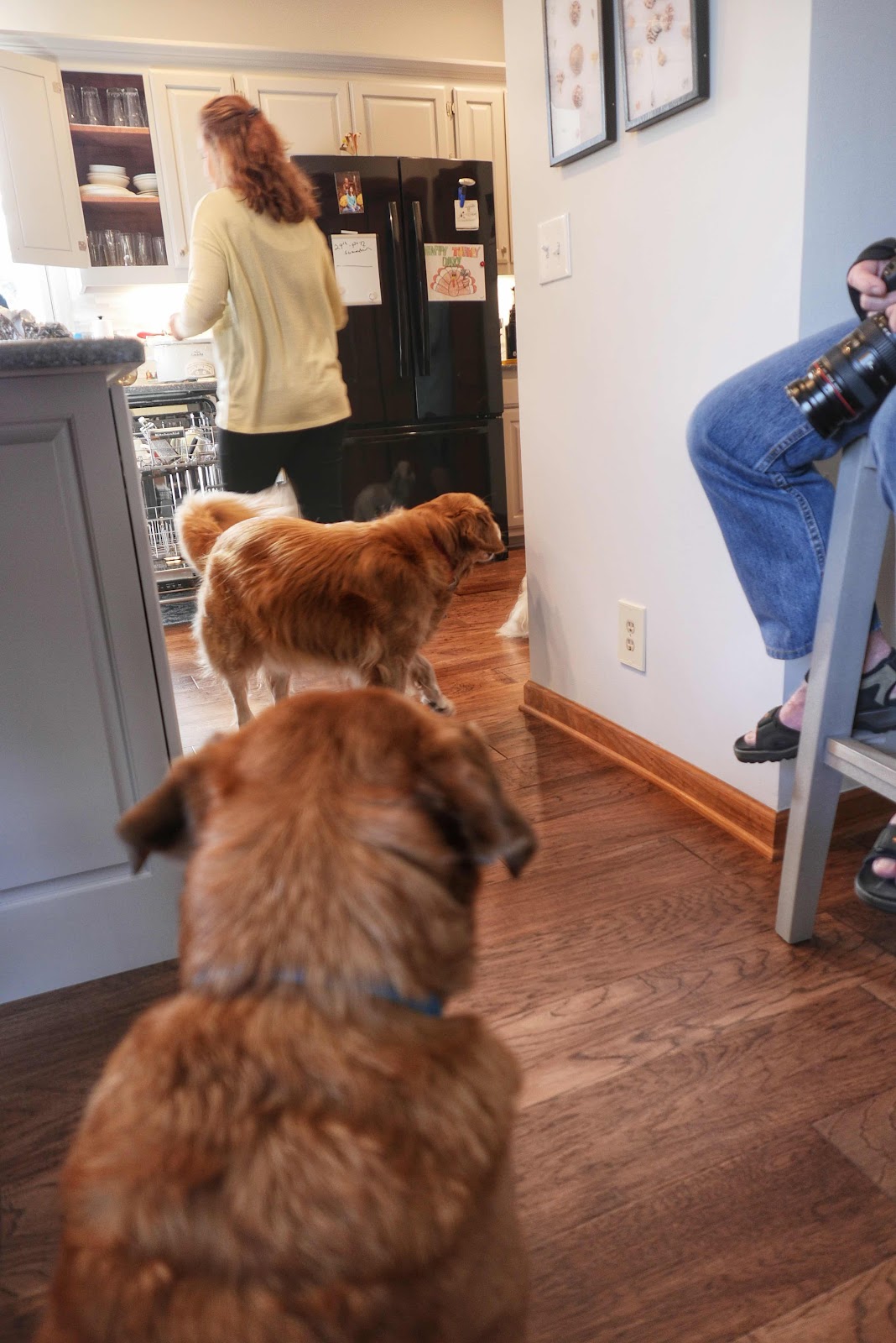 Quinn, the golden retriever above was abandoned in Turkey, rescued and flown to the United States. Russ said they were looking to rescue their fifth retriever and thanks to Covid there were none they could find in the US until this international rescue organization got in touch. Magnificently, the CDC has now banned dog importation from more than 100 countries as a temporary measure to prevent illegal breeding and transporting of dogs from around the world to feed  demand for dogs created by the loneliness of Covid. Rescue dogs around the world and their rescuers are so very grateful. It won't take much for temporary to become permanent no doubt. Foster below, was a foster dog until MB decided fostering wasn't enough. Rusty did okay with the crowd handling his own social anxiety as best he could from the couch. 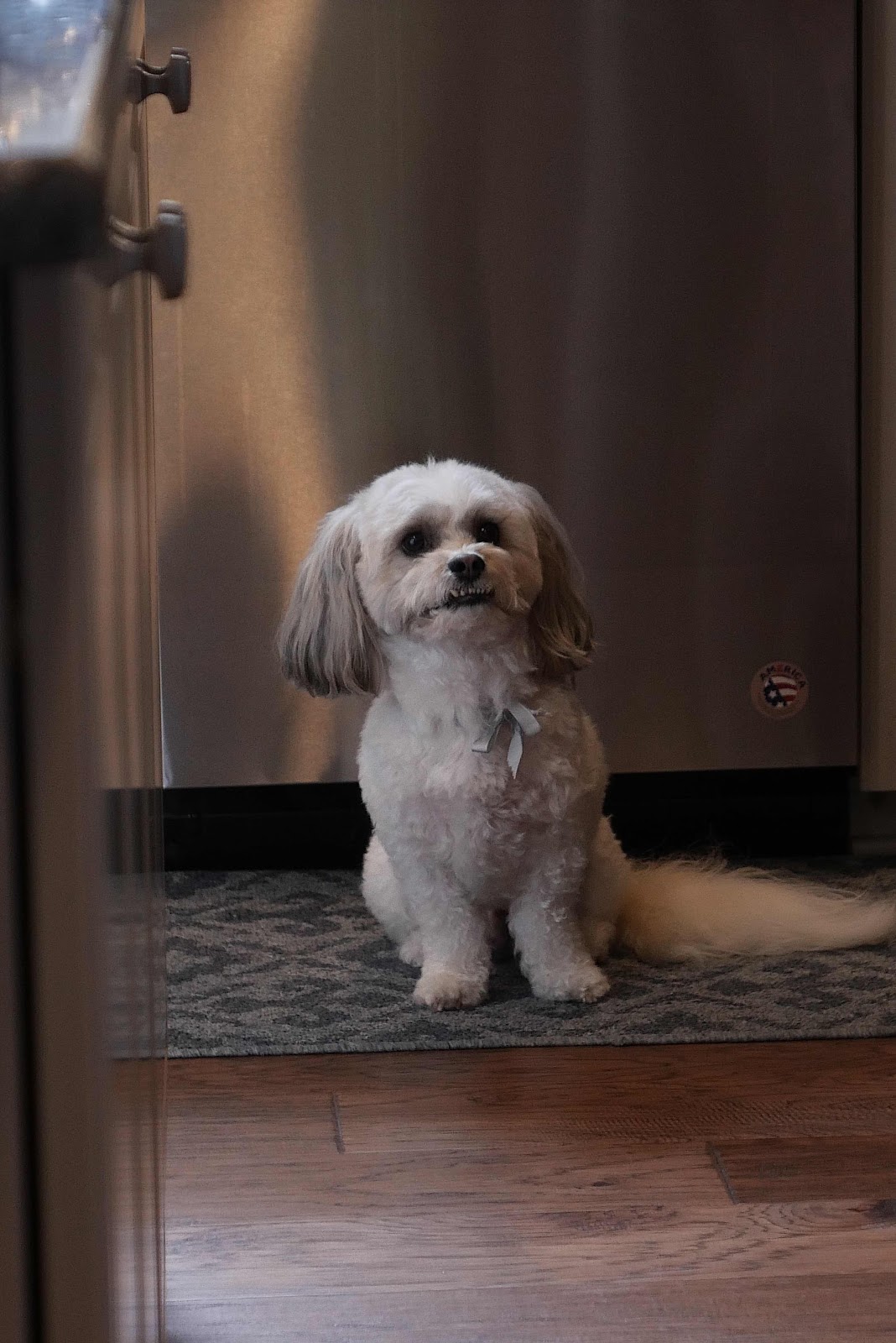 The meal was anchored by the usual turkey which was most unusual. Barbara swears by cooking turkey in a bag and it was the best turkey you have ever eaten. I say that meaning it's the second best as my wife's is of course the best. The thing looked absurd wrapped in a sweaty raincoat but that bag created a bird that was moist and filled with flavor. 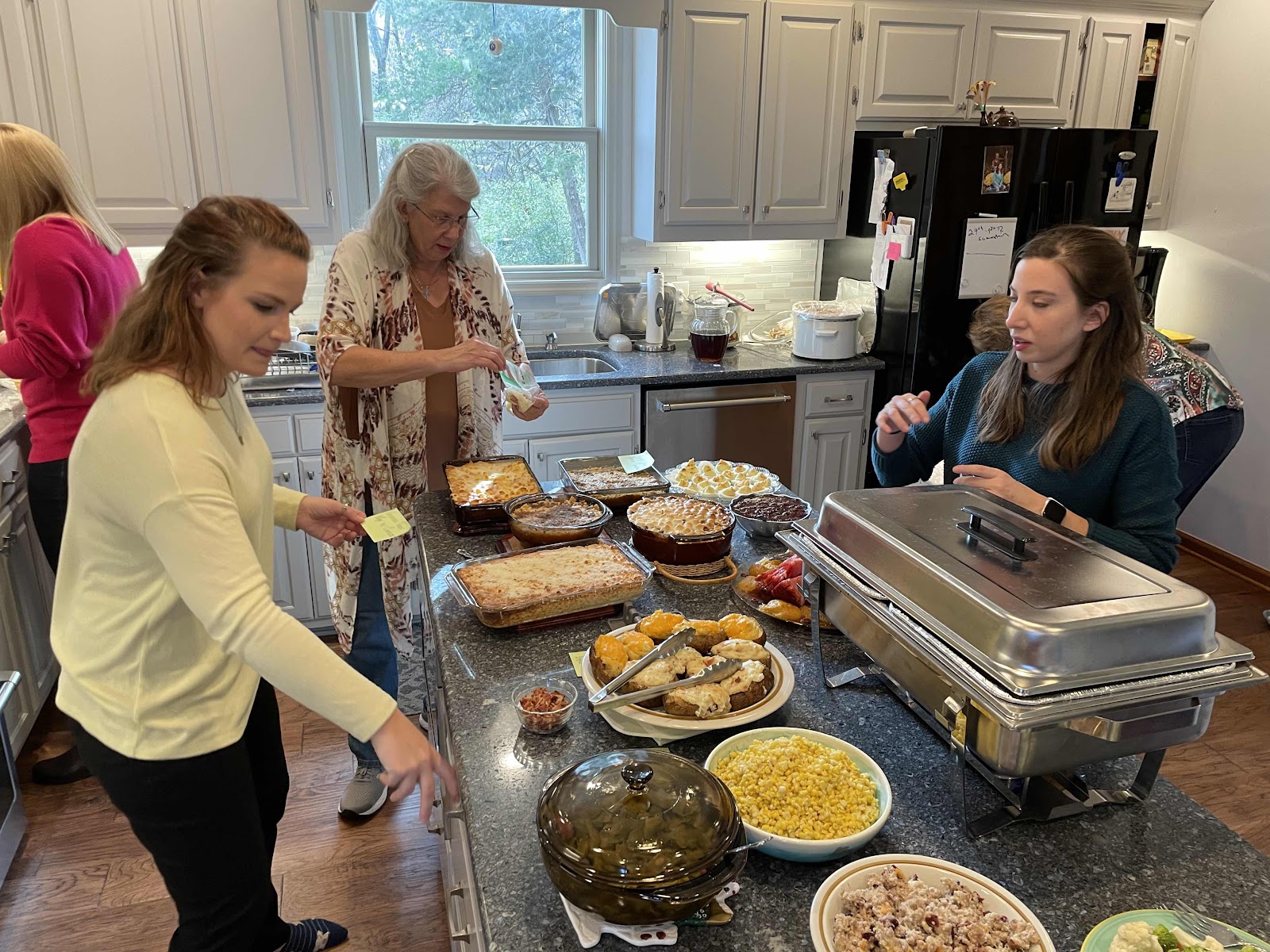 The other dishes were what you would expect and there were were too many of them and it was all magnificent and it really was Thanksgiving. 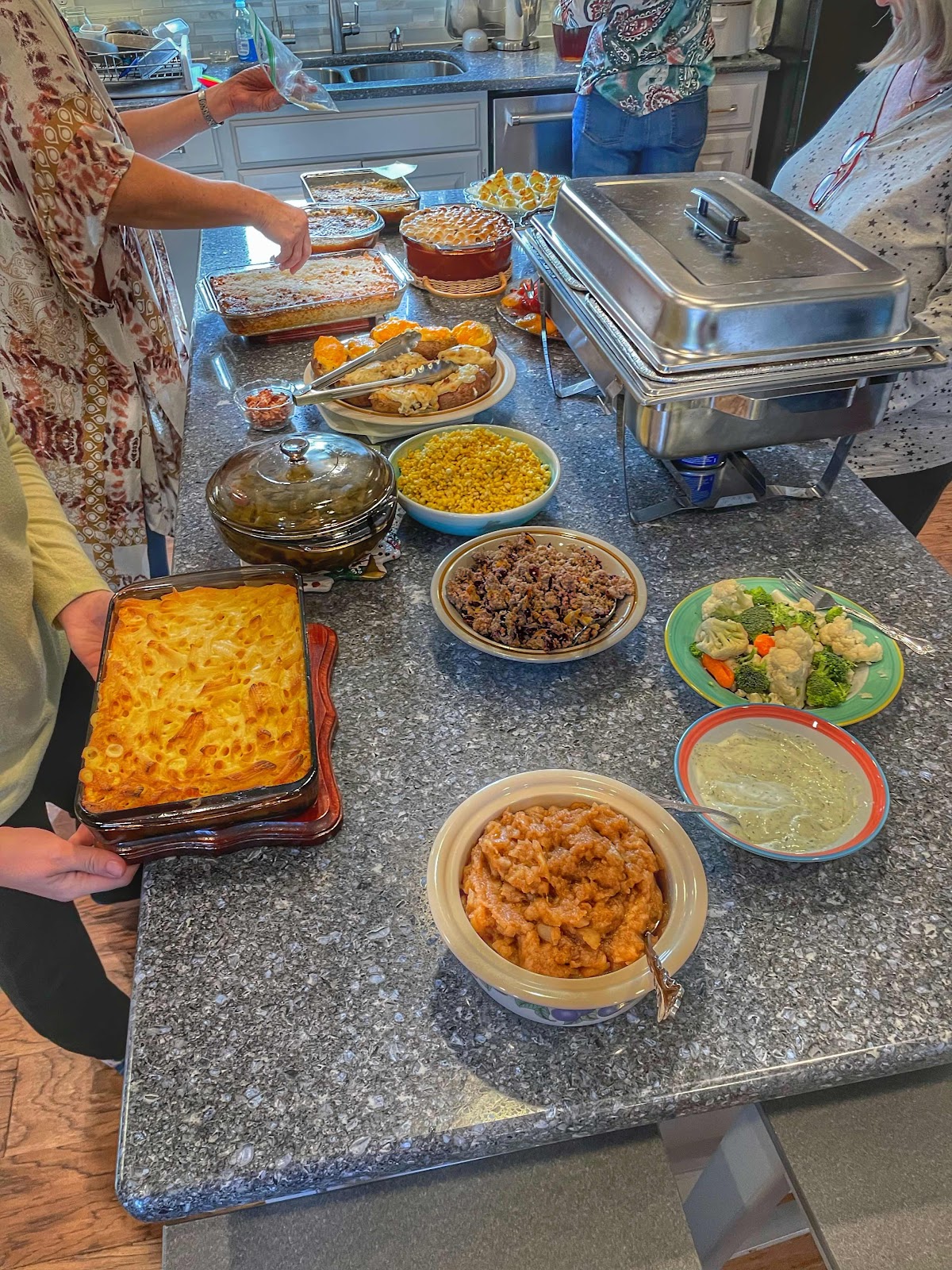 Covid kept the head count down to 13 but we were all there. Exchange these faces for people you love and you get the idea. 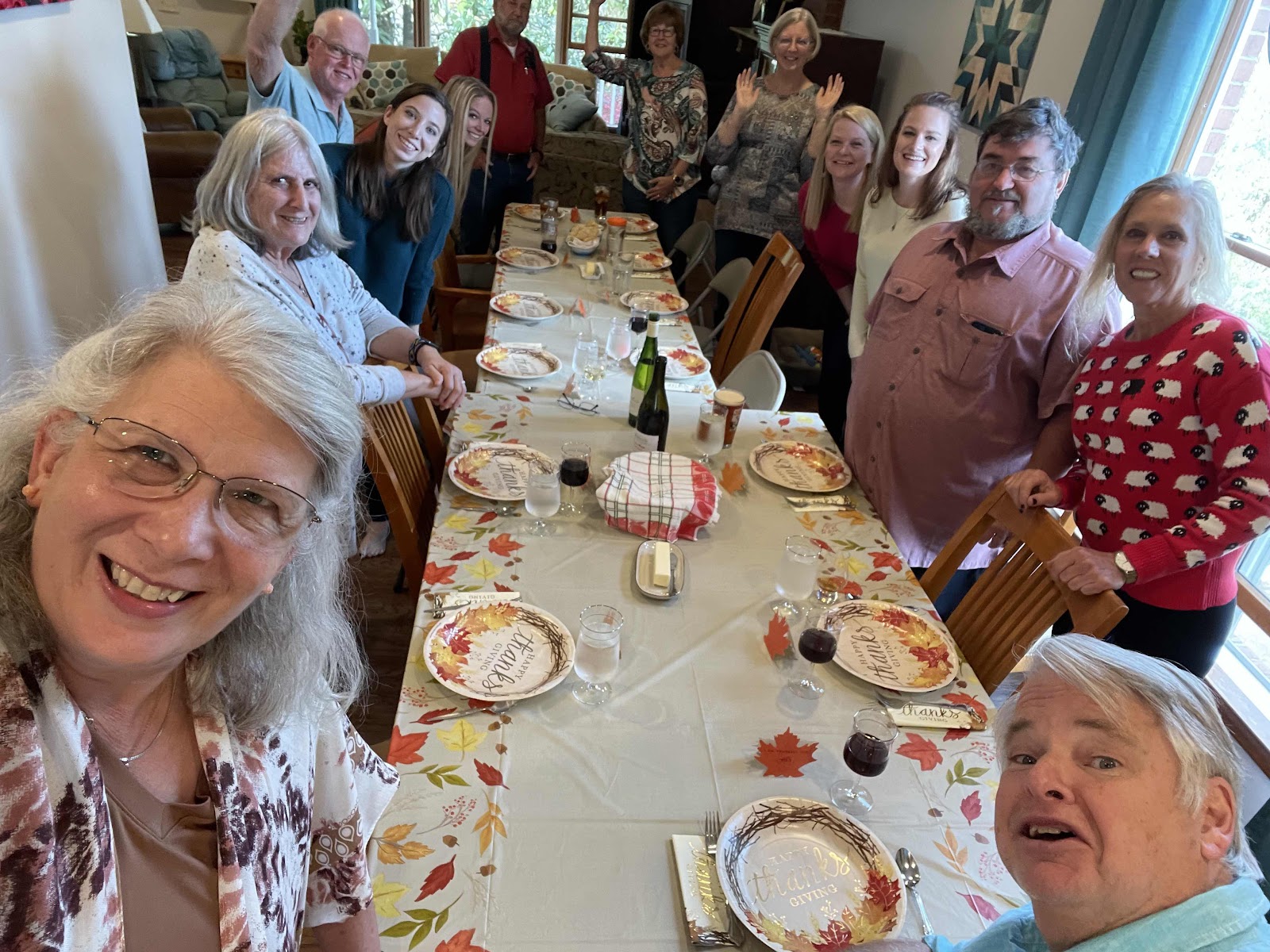 The day was wrong but everything else was entirely normal. For some reason I was off wine and went with Old Speckled Hen in a Guinness glass in a sea of iced tea and wine. Me special. 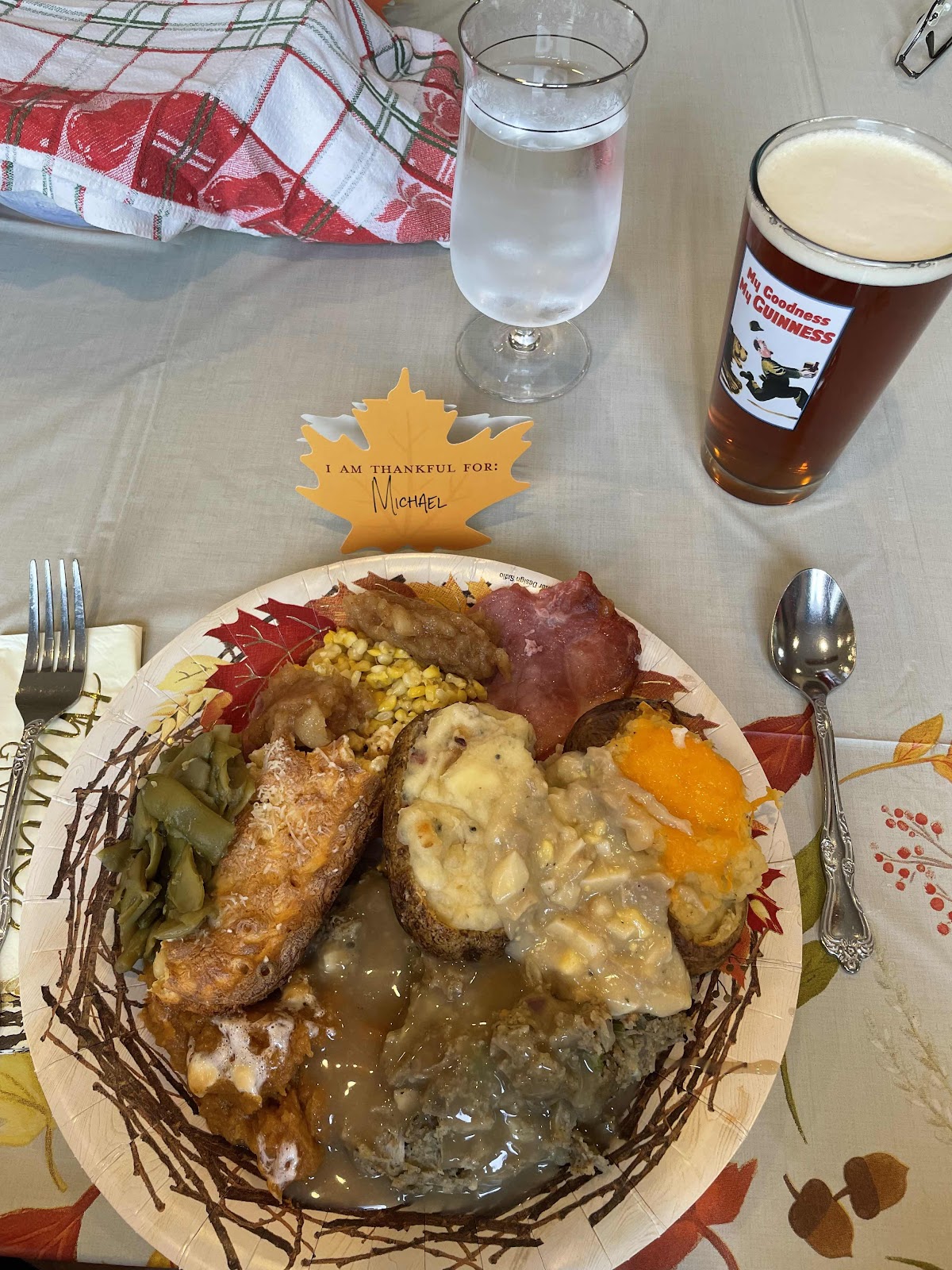 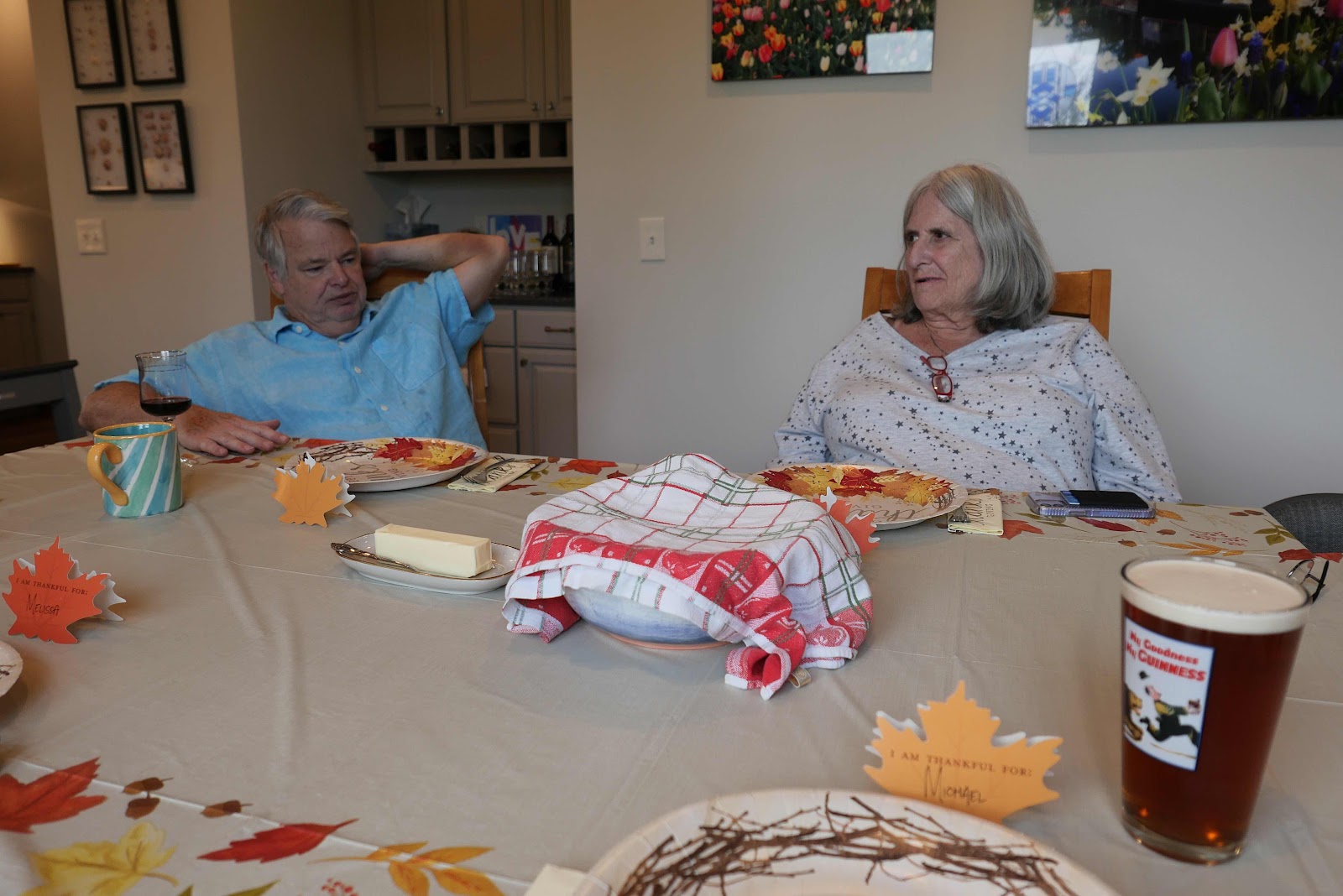 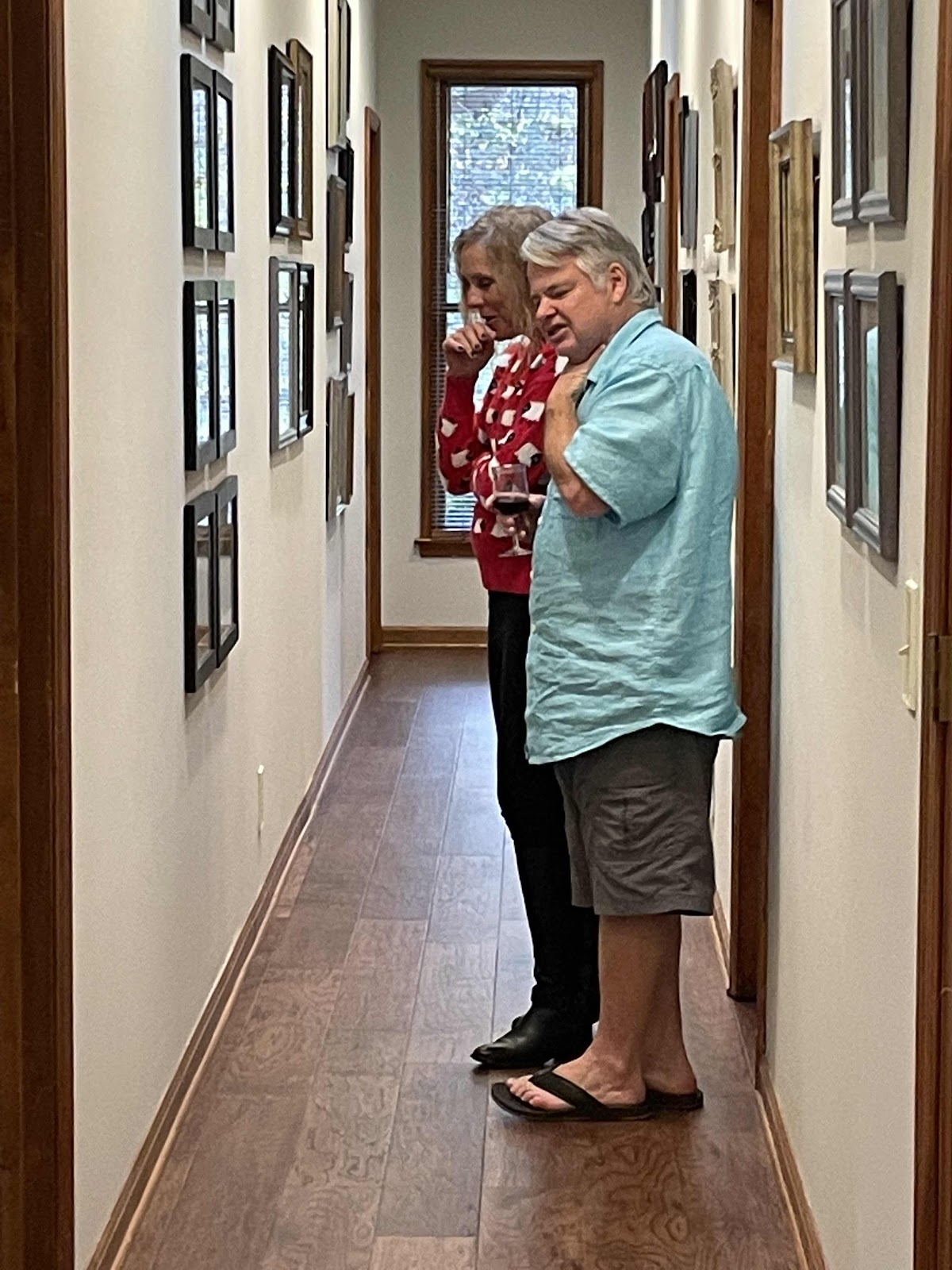 Russ started to herd hedgehogs before the traditional Thanksgiving walk. Rusty seems to enjoy being the photographer's assistant. 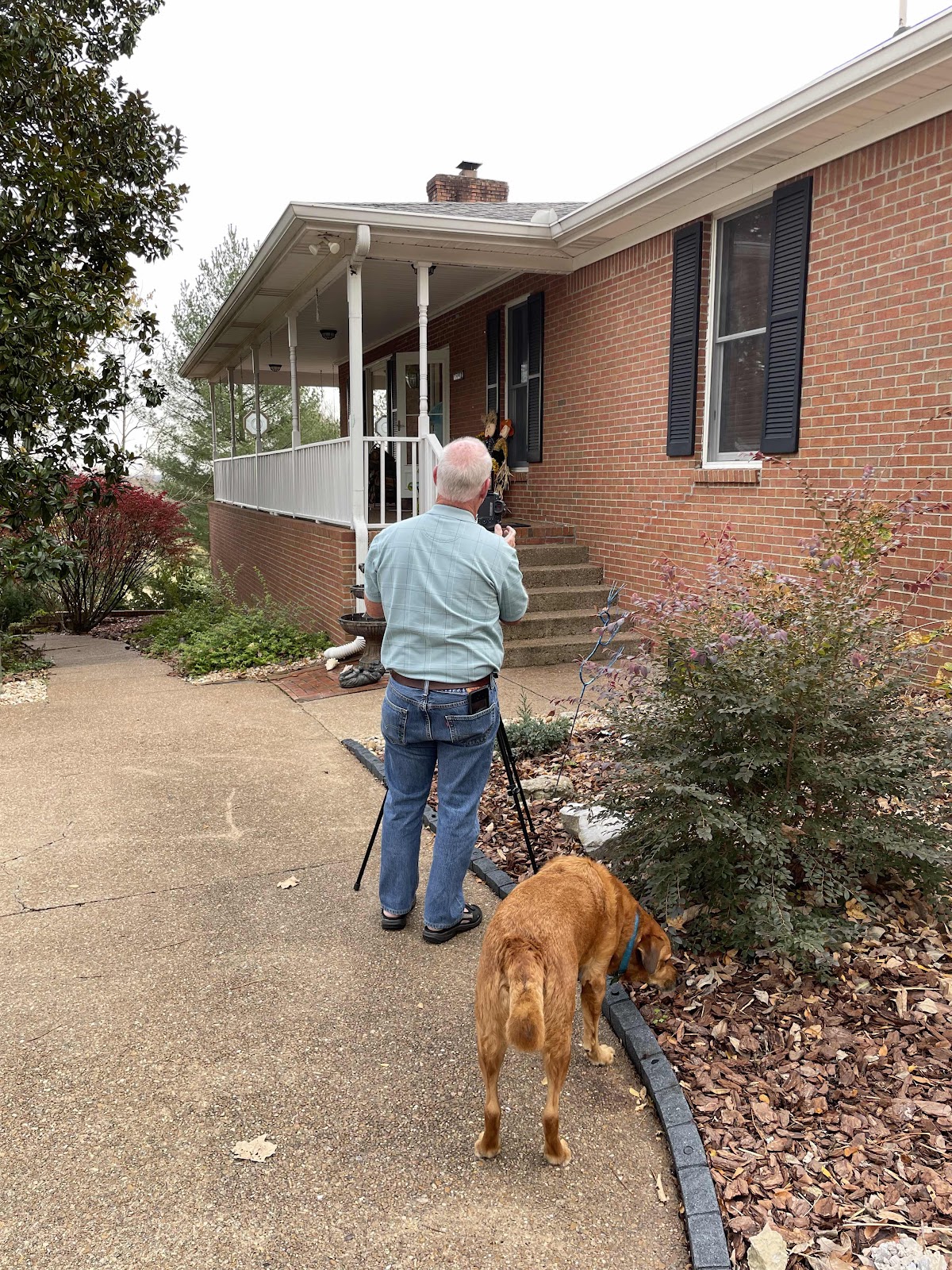 A leash for Quinn, an embrace for Foster and a firm grip on his collar for Rusty. All present and correct. 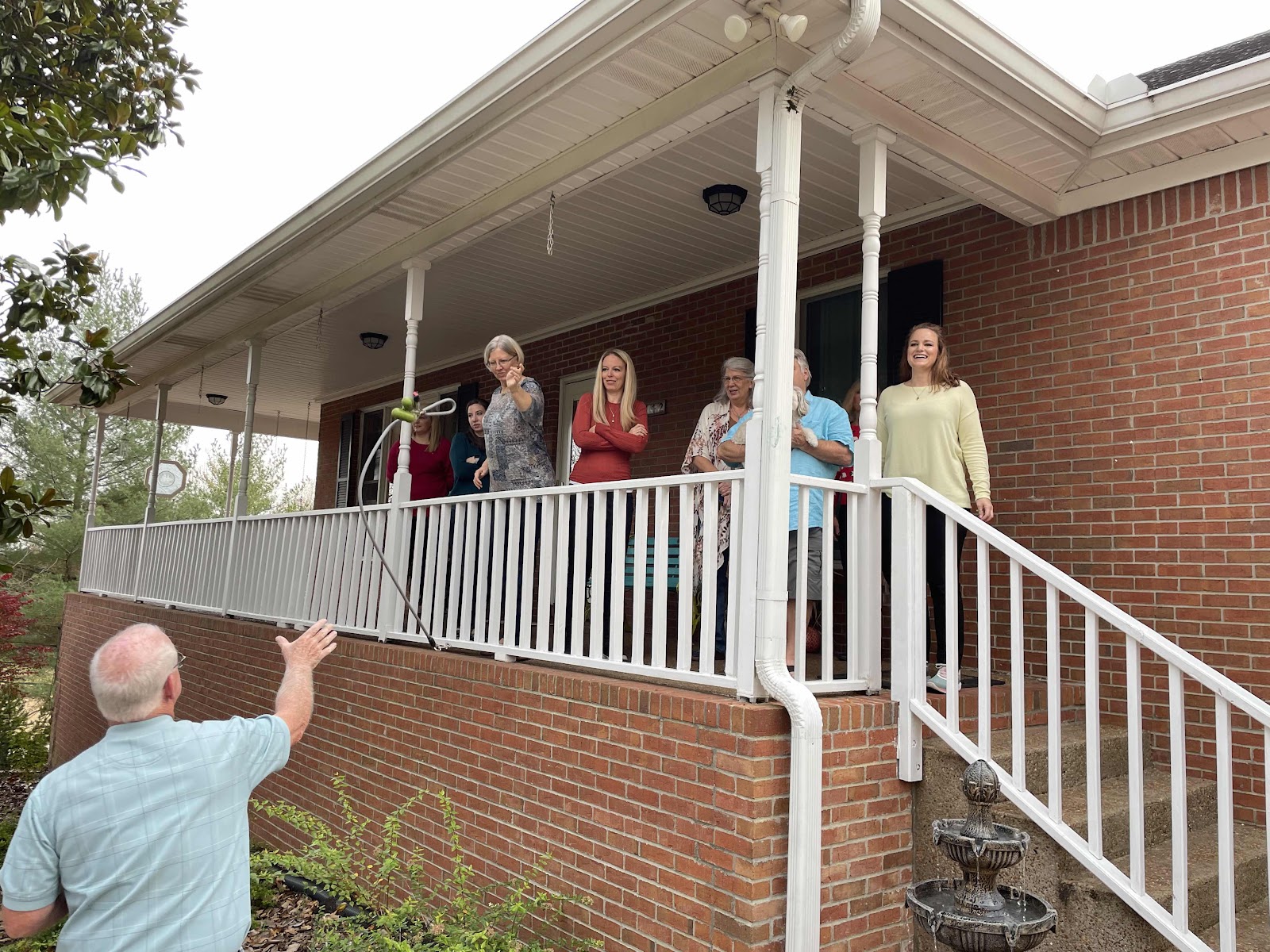 Then we went down the road where Gary and Barbara reminisced about their wild empty neighborhood thirty years ago, development, encroachment, change and too much traffic have all become irritants. Sounds like Key West doesn't it? 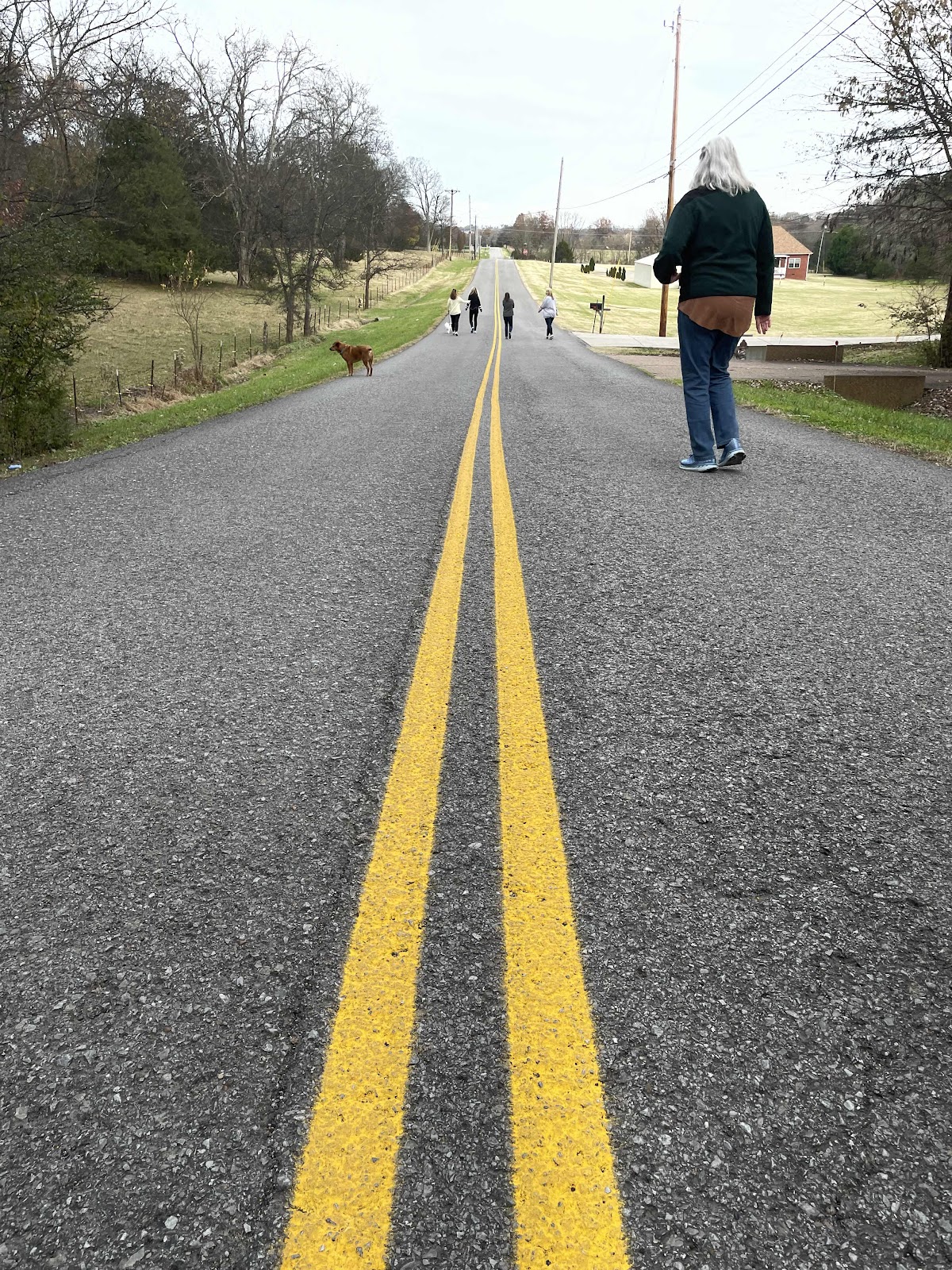 Then the carb coma and a showing of A Christmas Story that on my third viewing still cracked me up amid the cell phones and snores. It was perfect. 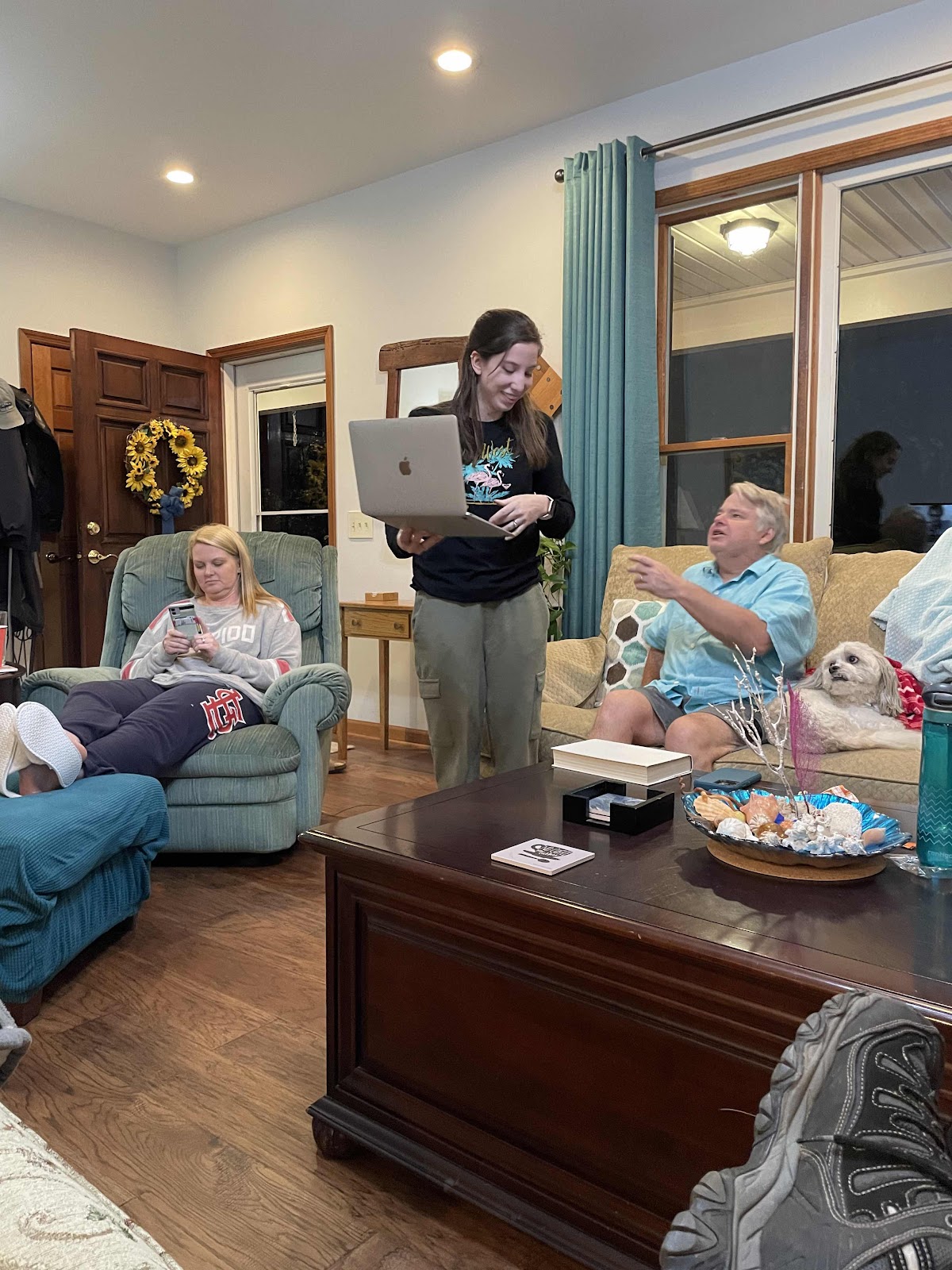 Gary has been an avid visitor to Key West forever and he forced himself on me more than a decade ago after reading my page online. I am notoriously shy but Gary was having none of it and invited me to lunch and kept doing it over the years. He was there for me when I was in the hospital and through  all the dramas of real life. All from this page on the Internet. Annoyingly enough I had a great time and I'm looking forward to making it back next year after Alaska. 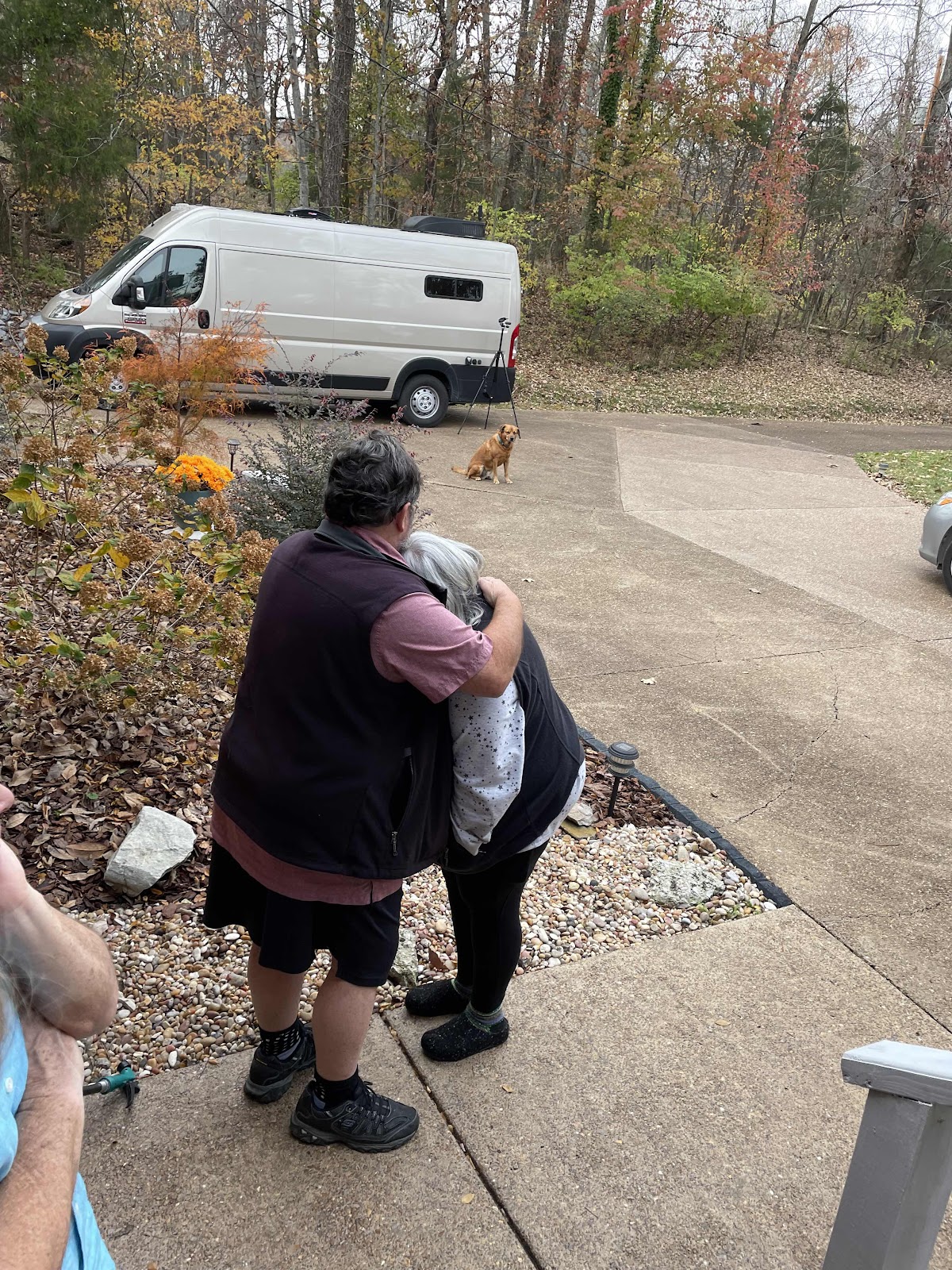 I suppose I do deserve a place at the table with this extraordinary family.  Thanksgiving a week early. I'm a convert.
Posted by Conchscooter at 10:25 AM 9 comments: