So we had three major wrecks in two days this past week on Highway One. I got slightly delayed on my way home by one of them and my wife was two hours late to work because of the other one. They were completely preventable and two lives were lost. That's a lot for the Florida Keys. 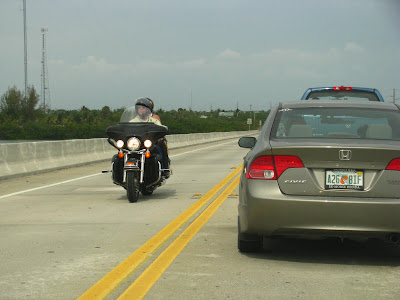 Wreck One involved some goof driving a 21 mph golf cart on the Highway in violation of common sense and Florida law which says you can only drive such vehicles, licensed and tagged on streets with a speed limit no higher than 35 mph. That stretch was 55 mph and a Sheriff's Deputy rear ended the cart and killed the driver who was reportedly not wearing a seatbelt. Jeez!
Wreck two involved an 85 year old driver who hit a trucker who was checking his 18 wheeler by the side of the road. The car ploughed into the truck driver, scraped him up on the hood and through the windshield where the driver's lady wife was sitting. 400 feet later the driver pulled into the gas station, shaken but unhurt. The trucker died. The driver has no memory according to the press of what exactly happened. Jeez!!
In case number three a man his wife and their baby were driving to Key West in a rented Ford Escape. The driver, after 24 hours straight behind the wheel fell asleep and ploughed into an oncoming 18 wheeler. Everyone survived but the SUV people flew to Miami while the truck driver was hauled to the hospital on Stock Island. A vacation ruined but at least no one died. 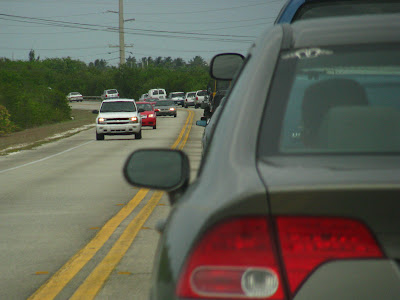 Wrecks happen and when they happen in the keys everyone feels it one way or another. Most of us make mistakes and get away with it, and then every now and again we don't. I keep hearing from people who play with motorcycles about passive safety devices, things that make people feel safer when they take their occasional rides. Common sense seems like it would be a really handy safety device to pack as well. I would really like it if we could go through a short spell with no more accidents at all, at least for a while.
Posted by Conchscooter at 9:01 PM 1 comment:

One of the great dividers in Key West society is whether one is pro or con cruise ship visits. The city makes something like two and a half million dollars a year from harbor fees, harbor pilots make large salaries thanks to the federal requirement that they show ships the way in. 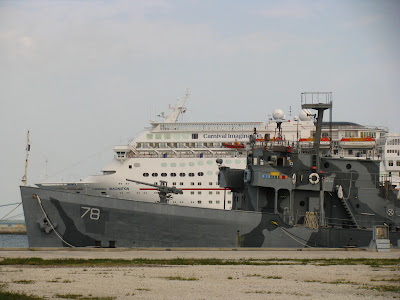 Historic Tours of America have a half million dollar annual contract to ferry passengers form the Outer mole to the north end of Duval Street. Shop owners at Lower Duval get thousands of shoppers traipsing through their stores. Tours get tons of visitors from the ships. 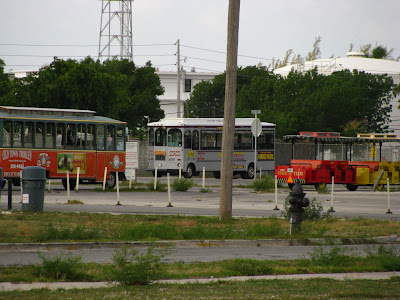 People who see no direct connection to the coin from the ships protest that the crowds make downtown Key West unpleasantly crowded. Shop owners on the southern end of Duval say the ship passengers aren't encouraged to visit their end of the street. 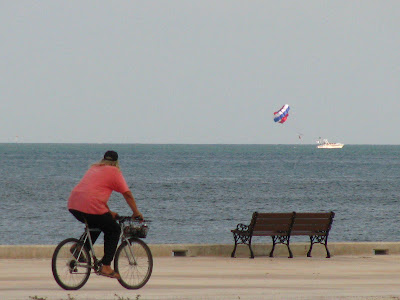 Environmentalists say the ships stir up crud from the harbor bottom and make the waters cloudy, those same waters the coral reefs need to be clear to allow sunshine underwater. 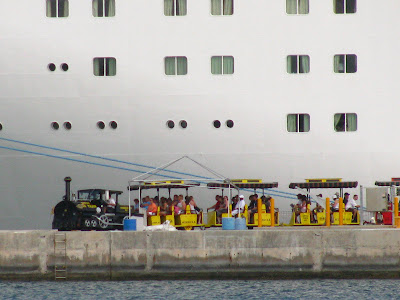 The slowly trundling trolleys and conch trains clutter the streets say residents who hate following them around at five miles per hour. God forbid a street be closed by roadwork! 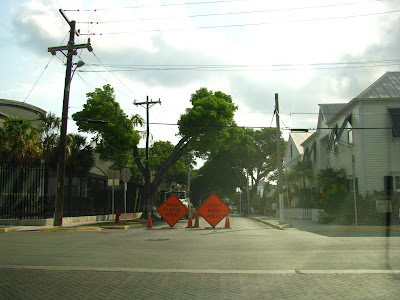 Me? I have no opinion. I understand the complaints of cluttering and pollution but anyone who chooses to live in Old Town expecting a quiet life needs to rent for a while before they buy to see how they feel about it before they commit. I appreciate the money that still flows through Key West as much of the rest of the country squirms under the weight of unemployment. To some problems I see no easy solutions.
Posted by Conchscooter at 5:01 PM 4 comments:

A parking lot attendant's lot is not an unhappy one (with apologies to William Schwenck Gilbert). 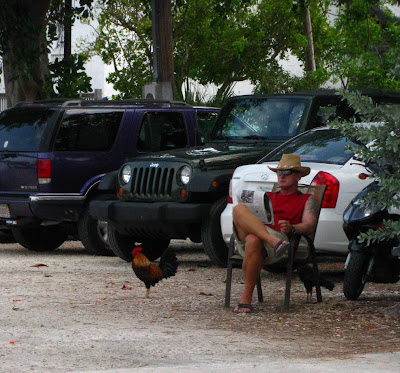 Parking choices in Key West are numerous yet people insist on complaining about the difficulties. Granted for residents who live without off street parking and then expect to be able to park in front of their homes with no problems, life can be a little harassing. However if a parking lot is out of the question, around ten whole dollars a day, you could feed coins into a meter to the tune of one Euro per hour, or a dollar fifty in old money. I like to swipe my credit card and keep the ticket on the dash for use at however many meters I use until the ticket expires. What could be simpler? 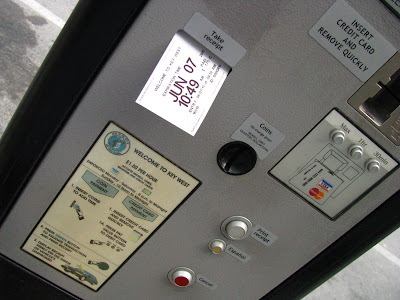 Look for the big blue sign and the small Tardis underneath it and there you are. The city's parking Tsar carefully studied the problems of parking in Old Town and came up with a plan that was going to change everything in favor of a decal program to limit street parking. The city commission took one quick look at their expert's opinion and threw the whole thing out with no discussion. The net result is residential spots are still reserved for Monroe County tags and people who buy annual decals. So much for hiring expert staff. 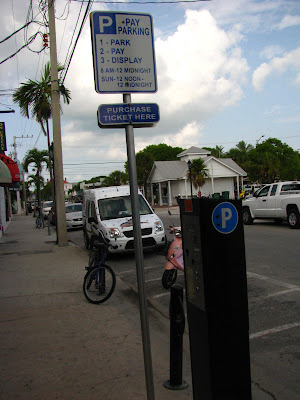 Riding a two wheeler into town could be a lot simpler as there is free parking all over the place. Don't park in spots reserved for bicycles and don't block motorcycle parking your car and all will be light, happiness and joy. 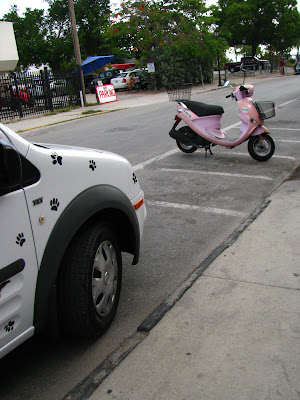 I saw this motorcycle paying to park apparently and I was forced to the conclusion that most likely a nearby employer had an agreement to let the workers park in a paid lot during the work day. Otherwise it makes no sense to pay to park. 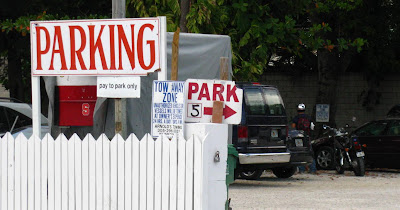 One final tip is not to park as locals do. Just because someone else leaves their scooter on the sidewalk doesn't mean you won't get towed if you do the same. Private agreements with landlords and property owners don't necessarily extend to strangers. And in case you are wondering just because I work at the police department doesn't mean I get special privileges- only one person in the city is authorized to cancel parking tickets and his orders are fierce, so don't even ask.
Posted by Conchscooter at 11:01 AM 2 comments:

Of Dogs And People

I actually felt a rain sprinkle Thursday and turned my face up to the sky which action promptly turned the divine spigot off. So much for that. I keep seeing black clouds form and sparse and two days of muggy overcast produced nothing much, one wonders what a desert would look like down here. 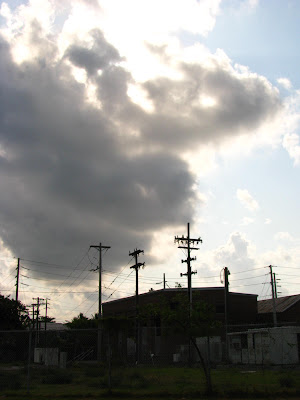 Perhaps a plague of locusts is next? I notice other people's dogs sticking their heads out of the windows of cars. 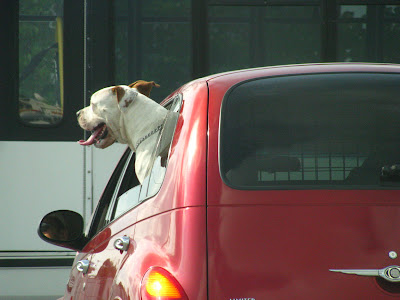 Mine rarely does that, sometimes she sits up and stares out until I notice and open the window for her, but it takes very little to assuage her curiosity and she returns to her favorite place: 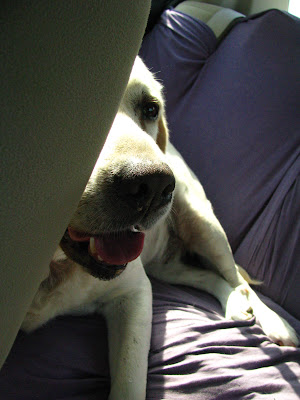 Garythetourist mentioned that I give my dog more freedom than most people do. Most people, I replied are control freaks when it comes to their dogs. I figure when my dog is out walking it's her time and she gets to do what she wants, which mostly ends up being rooting around looking for smelly things to eat. When she's not out walking she's pretty relaxed. This next picture reminds me of an old Key West joke. 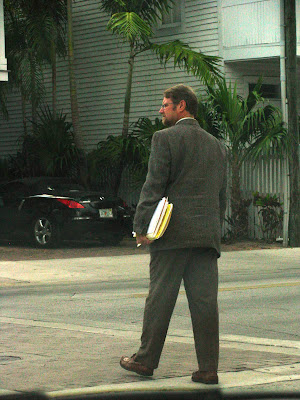 "What do you call the guy in the suit?" - "Defendant." I'm guessing this guy is a lawyer, though when my wife worked in juvenile probation and had to appear in court on a Sunday morning she was surprised to see how dressed down everyone was. They'd never get away with that in California, the former public defender groused at me. Wearing a suit and tie in Key West seems excessively silly in any event, speaking as one who refused to wear a tie to his own wedding.
Posted by Conchscooter at 5:01 AM No comments:

I love that demand. One day I shall have to obey. 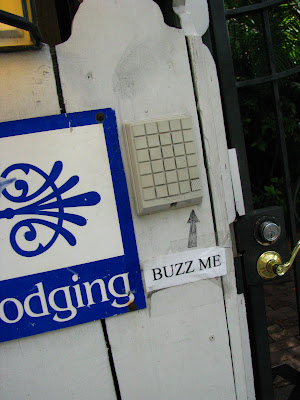 This bumper sticker celebrates a family of musicians who have reached sudden winter prominence around the Keys. I keep meaning to go one of their performances at Boondocks but the opportunity has escaped me so far. They come highly recommended. They have a horribly overwrought website which loads slowly and skips fit to give one a headache so never mind that link. 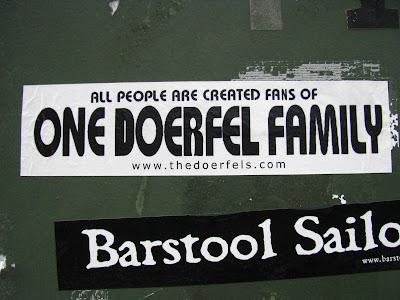 I should have liked the sticker better had been a cut and paste reduction of the One Human Family sticker it imitates, but there it is. I can't over how busy Key West seems to be for the time of year. We read about tremendous heat waves Up North which must make the Keys weather seem very pleasant by comparison. It's unusual to see one hundred degrees around here. 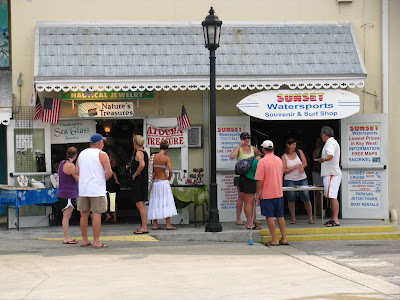 I just can't understand what all these people are photographing... 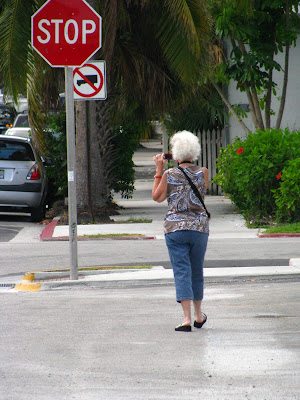 And then I ask myself if there is a rule about who rides in front on a tandem. And what pleasure does the rider in back get? 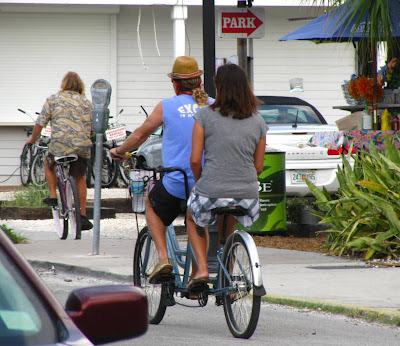 I tried a tandem once and it felt too odd to enjoy, like pedaling a bus.
Posted by Conchscooter at 12:01 AM 4 comments: