Downtown Key West is safe again for a while until schools get out and there is parking available with no lines in restaurants and the simple pleasure of an ice cream at dusk without elbows poking as you wait in an interminable line of people not used to being offered tropical fruit ice creams- cause for indecision. My wife is part of a cabal of teachers who miss Michael Robinson's skills in the administration at the School District but he is enjoying retirement. Much of his enjoyment in Key West he explained in my interview with him ((LINK) and the rest of his pleasure is on display at the piano in the Gardens Hotel on Angela Street. 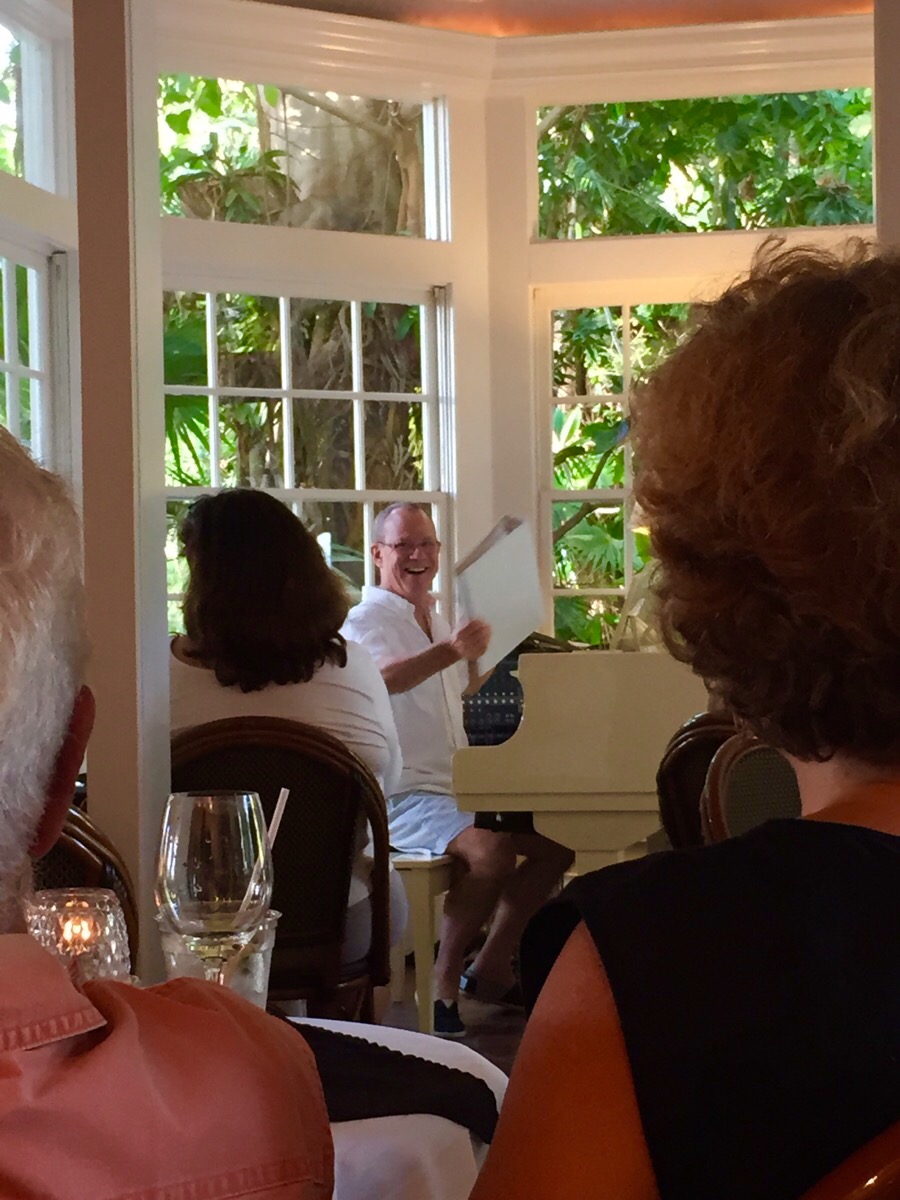 It's an interesting venue, not only because they offer wine by the glass in a self pouring bar but also because you get the visitor's eye  view of life in Key West. I must say it does look quite decadent doesn't  it? 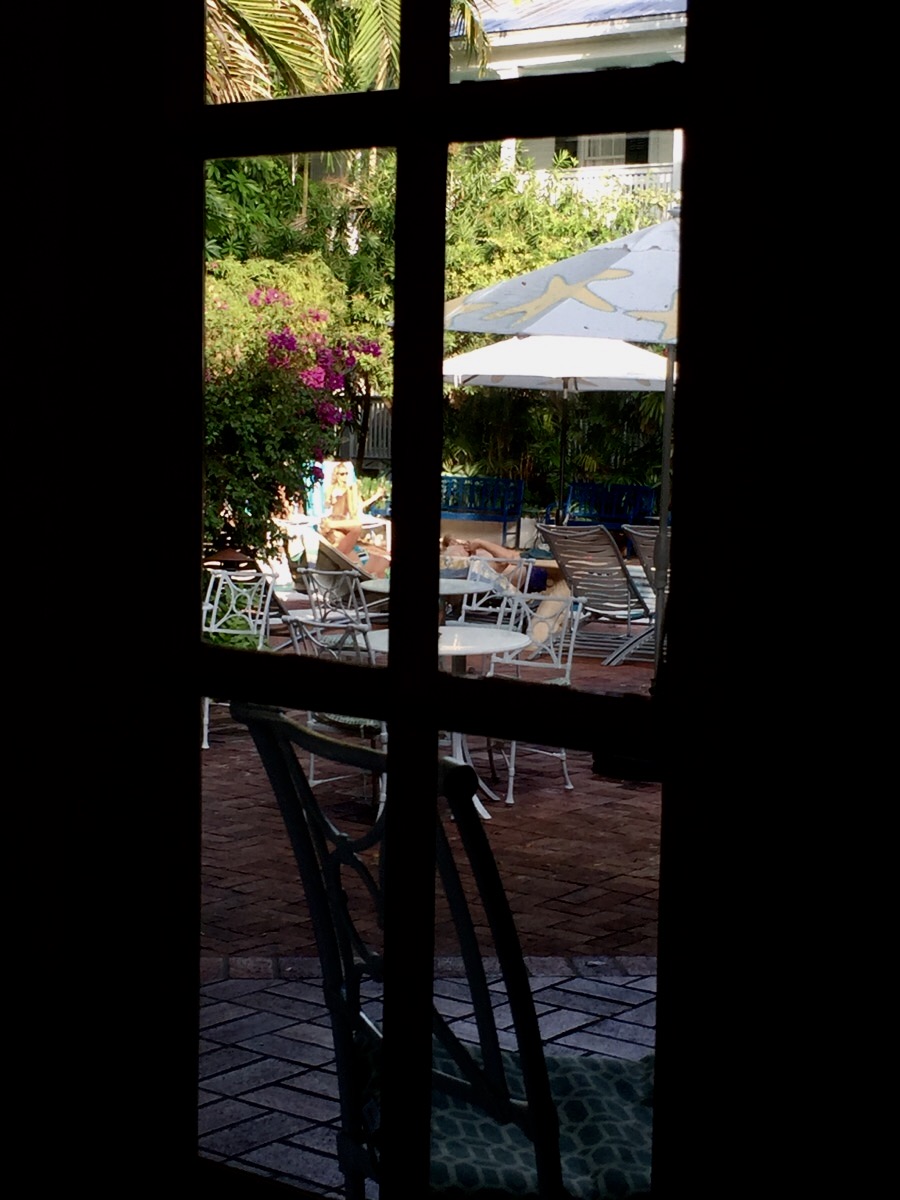 The  wine bar concept is really quite smart, with a self service dispenser offering a quarter glass, a half glass or a full glass of wine from a  machine (I forgot to photograph!) that keeps the air out and allows partial pours without spoiling the contents. The hotel sells cards which you charge from your credit card and with glass in hand you help  yourself where and when you want.  This allows you to taste a variety of wines with a very small commitment. I think its brilliant. 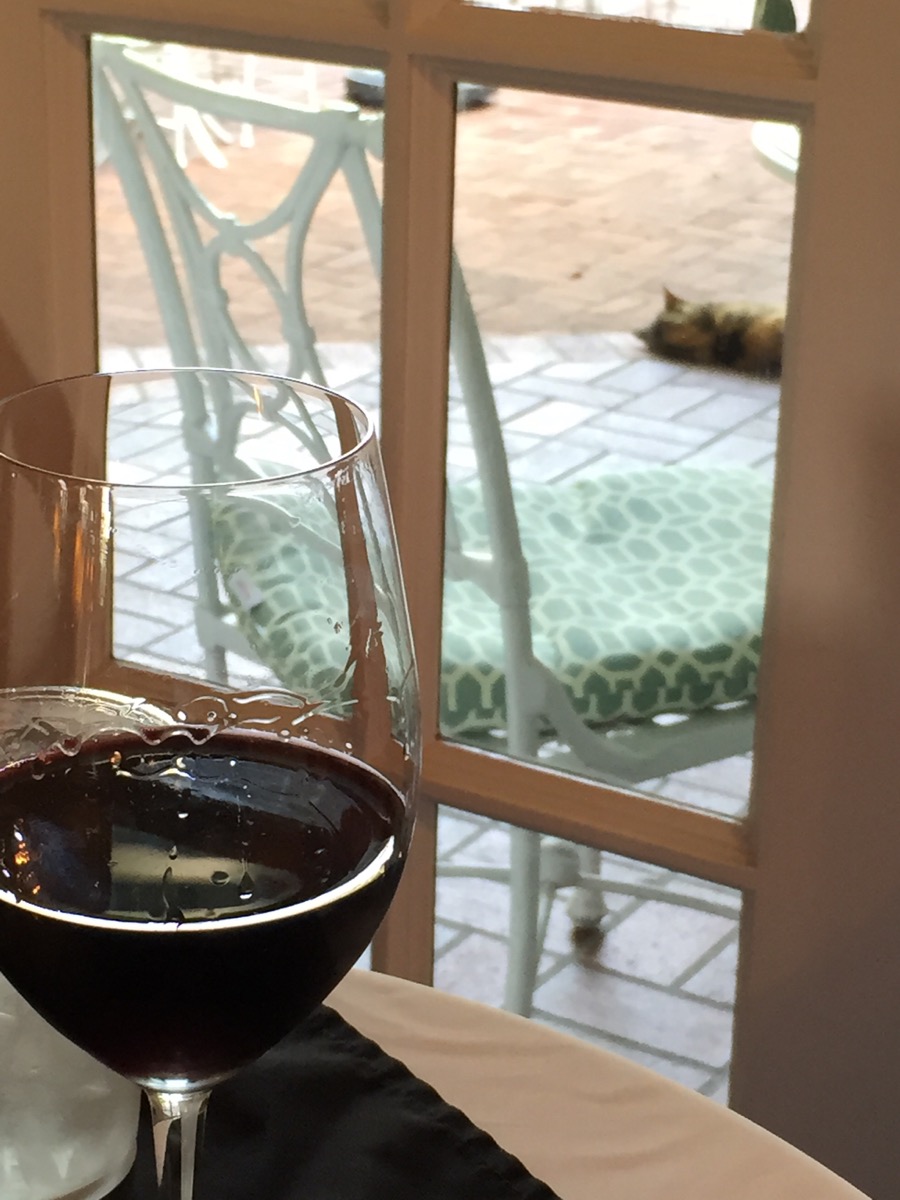 My wife likes sushi, which fact is a burden for me as I am indifferent to the whole concept of paying large sums of money for raw fish. It's not that I don't like sashimi, its more that I don't like paying a lot for it. I suppose its petit bourgeois of me and a terrible thing but there it is. However in the spirit of compromise I figured my long suffering wife deserved Japanese to close her work week and she proposed we eat cooked food. Compromise indeed. 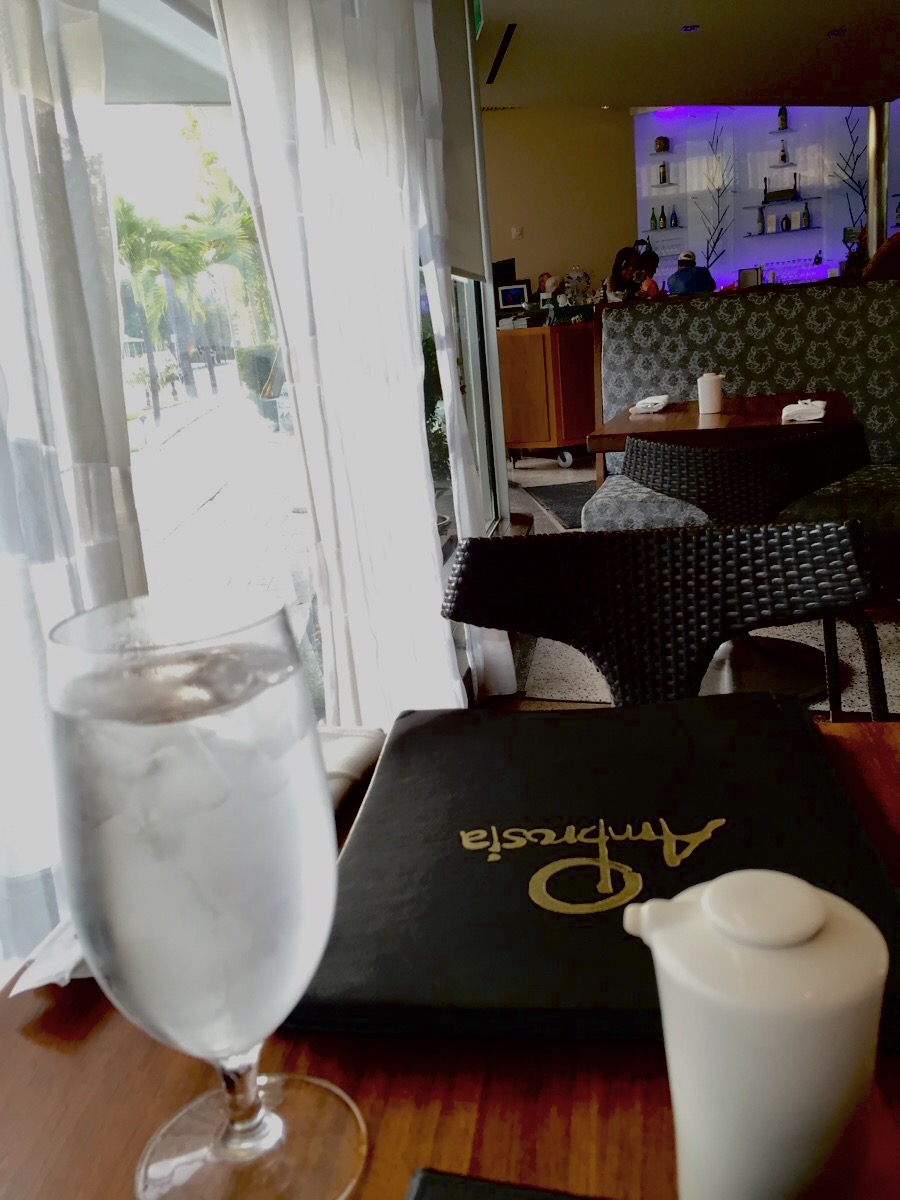 People that know say Ambrosia is the best of its kind in Key West and it is quite charming as far as modern airy decor goes. The food is beautiful and of course it is nicely done. We selected appetizers and when you get duck presented like this all will be well: 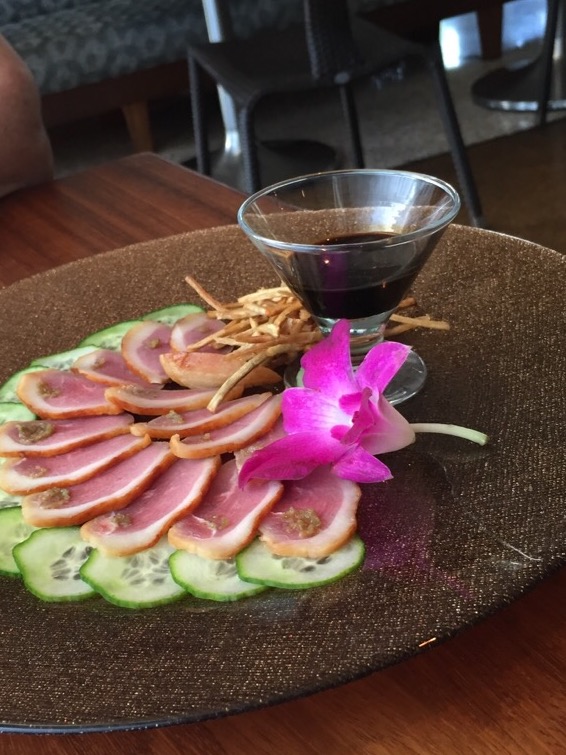 For pudding we decamped to Flamingo Crossing and I realized as she chose something to share that I have fallen hard for that restaurant habit that Key West  seems to require of people. You go to one place and eat your favorite dish and never vary your choice and repetition becomes a way of life. I need to figure that there is quite possibly ice cream as good elsewhere and I should hunt it down. But I like my tropical fruit flavors...so I keep coming back. 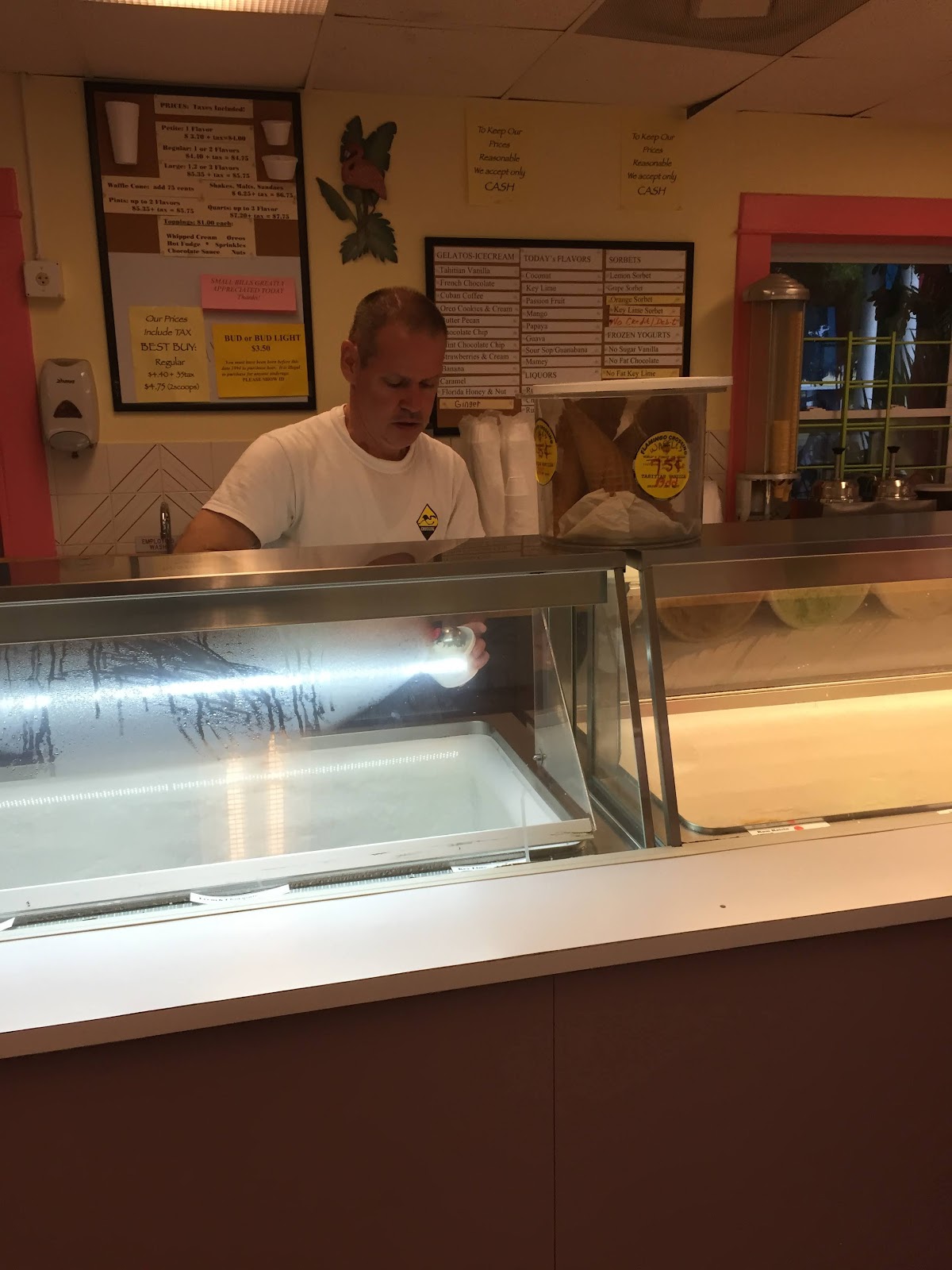 The thing is, Flamingo Crossing at Virginia Street on Duval has easy parking if you have a car and more importantly for those of us who don't, is the view. I like sitting up on the porch looking at the passersby. It makes the ice cream taste better. 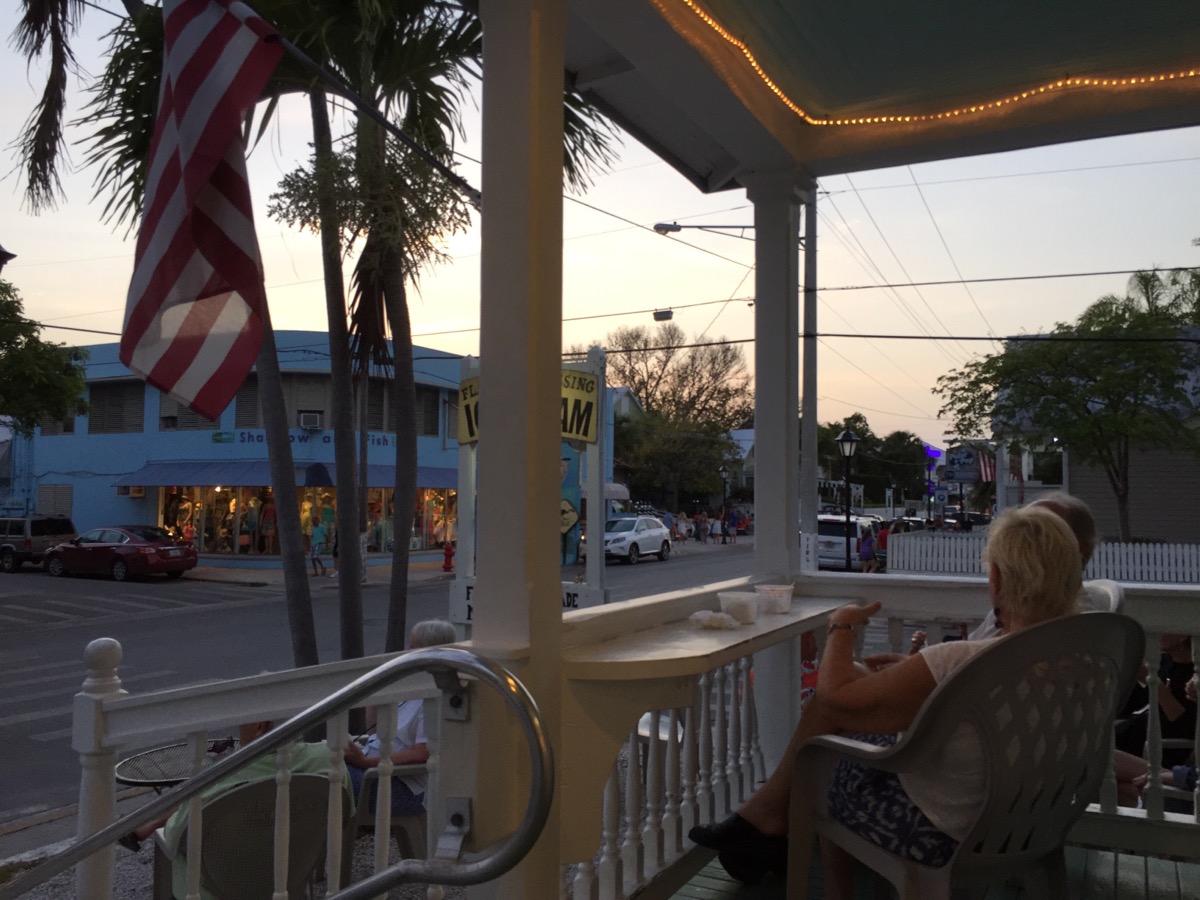 Then the ride up Duval in the  twilight. My wife riding pillion had not previously seen the transformation of Fast Buck Freddie's a particular local department store into one more national drugstore, bright, white and bland. Its what makes Key West special. 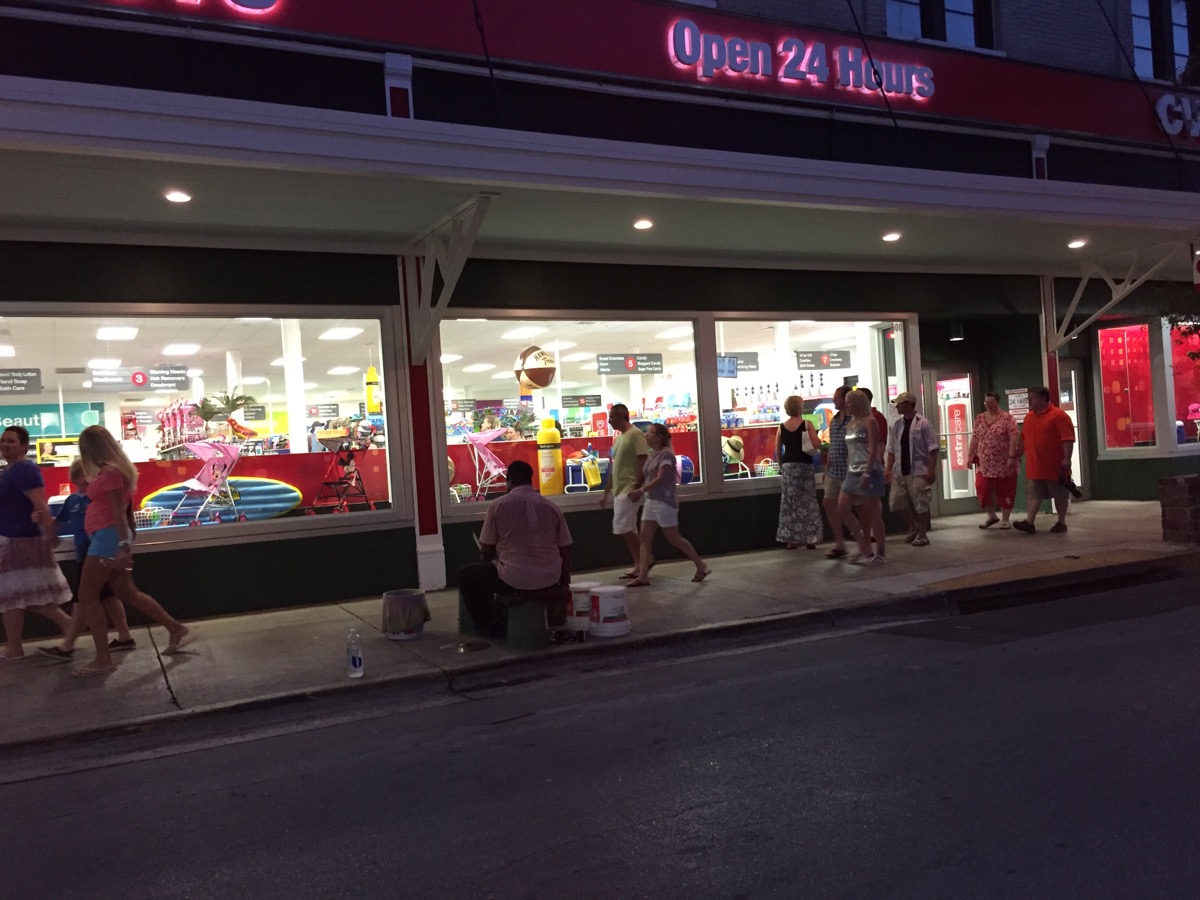 The Tropic is the other movie theater in Key West, the one where real food and decent snacks are offered alongside beer and wine in the lobby, the theater where movies can have subtitles and where summer means fewer annoying old snowbirds explicating the plot to each at the tops of their voices. Of course  summer is the time when less money comes in...can't have it both ways. 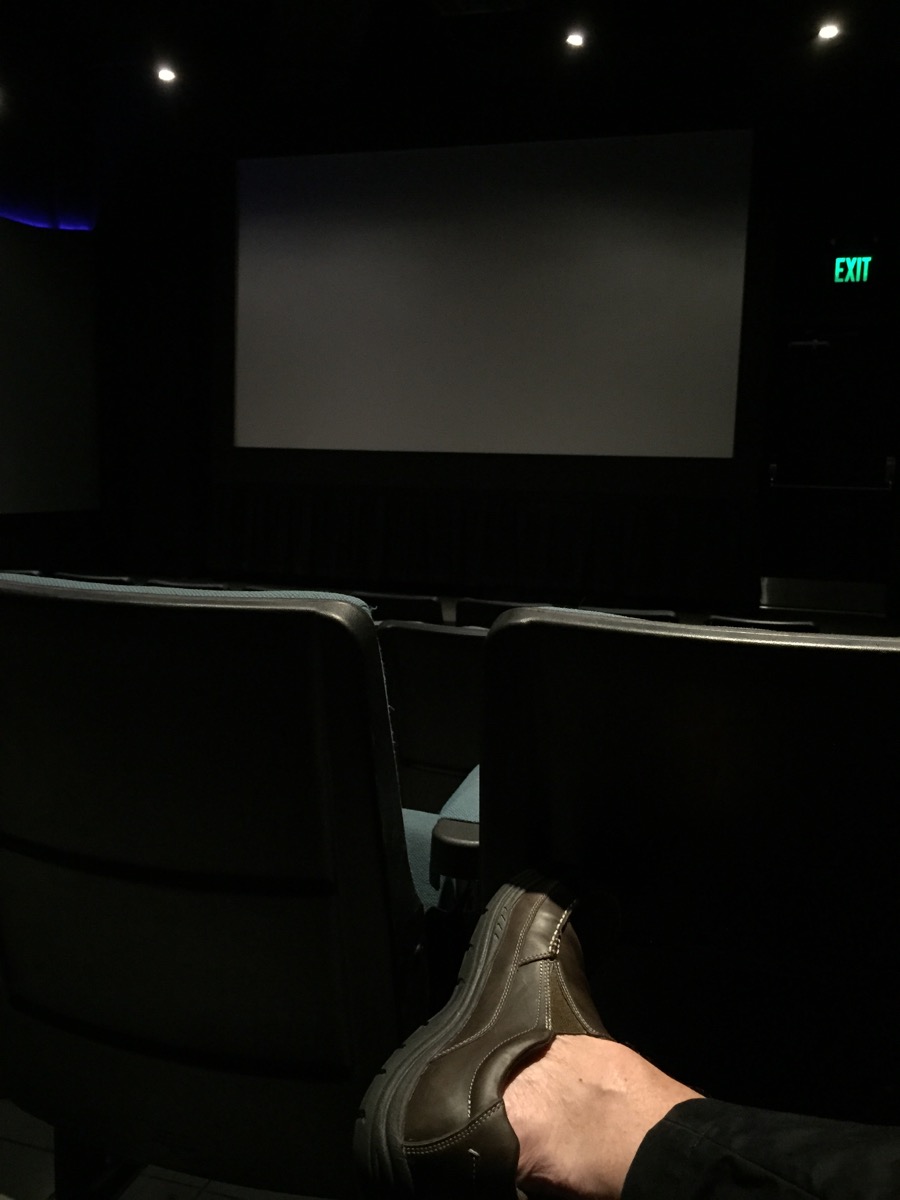 And then home to herself. Sleeping. 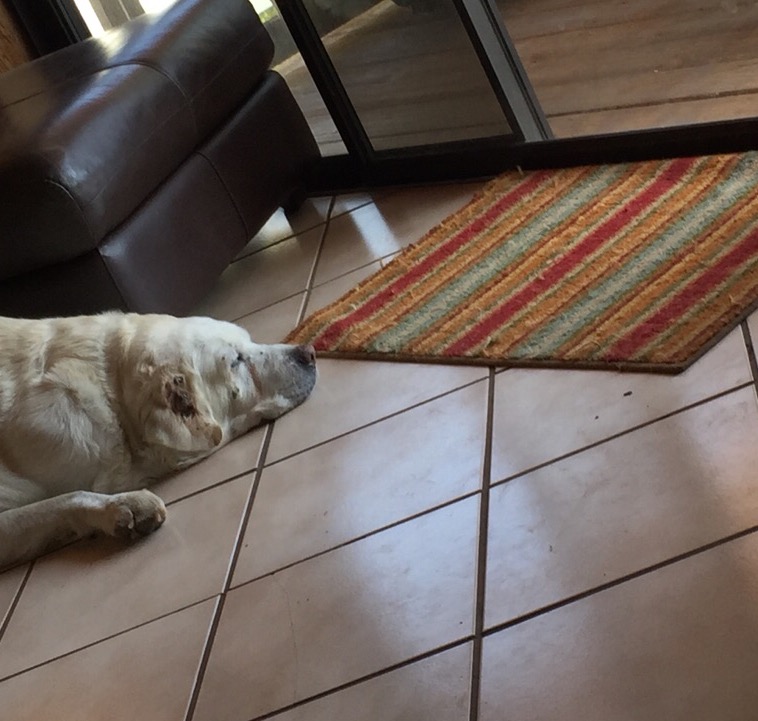 I ponder sometimes the value of living in the suburbs half an hour out of town when so many people prefer living within a few blocks of where they like to go for an evening out. It remains for me a question that is hard to resolve definitively but I like the peace and quiet and easy access to the water of suburban life. I don't mind the commute but sometimes the prospect of having to drive to town for entertainment kills the project, especially if I have to plan to go back for work later. Lots of people don't want to drive 20 miles for a  dinner party so that can create a one way friendship. But waking to a silent neighborhood, no fear of petty theft from the yard, my boat in the canal at my dock, and all the off street parking I need for half the rent of a similar homes in the city...it all adds up to my preference. And my wife's too apparently which slightly surprises me.
Posted by Conchscooter at 12:00 AM 2 comments: