We took a boat ride out to Snipe Key and the place was absolutely perfect. Cheyenne made friends with some nice young scantily clad women and the sun shone splendidly. 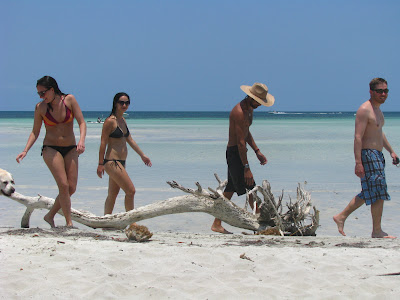 Marketers keep telling people the Florida Keys are a great sun and sea destination sort of implying there are great beaches too. Which is not true, at least not if you measure them against truly remarkable strands like the wave filled beaches of the East Coast or the incredible talcum powder sands of the Gulf Coast. 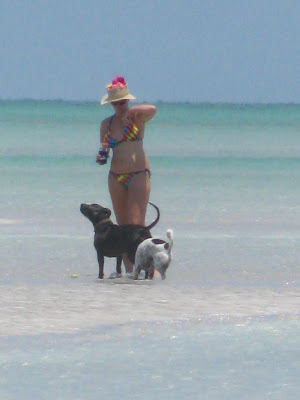 And let's face it standing in water up to your ankles a quarter of a mile out to sea makes for poor swimming. So these few sandy islands scattered along the northern Gulf of Mexico reefs are a real treat for locals with boats. 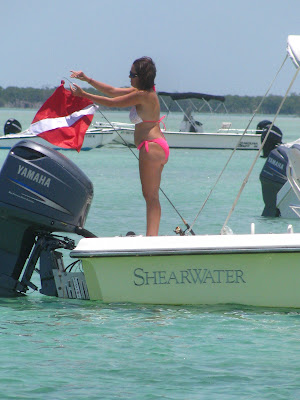 It's important to get the tides right if you want to enjoy these islands at their best and the Gulf of Mexico tides on the north side of the Keys are completely irregular so you can show up here and all the sand can be underwater if you choose the wrong moment. 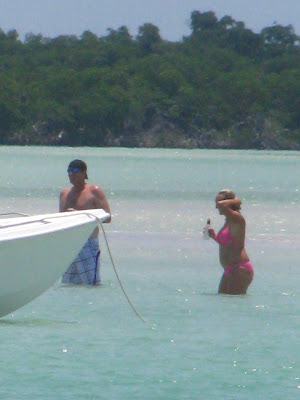 These islands make for excellent informal gathering places and family groups will plan to spend the day here, unfortunately the sounds of silence are not usually heard as someone has to play deafeningly loud canned muzak to remind them that civilization is never too far away. 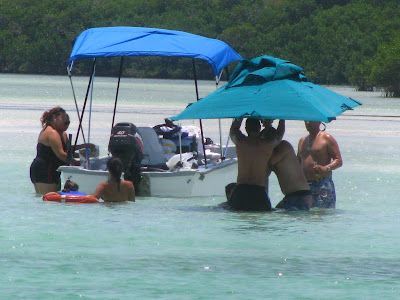 15 miles north east of Key West it's a whole other way to experience Keys living.
Posted by Conchscooter at 9:01 PM 6 comments: Links to this post

My sister managed to visit Key West on a sudden trip from Italy and she managed to come to town when I wasn't here. That's the sort of scheduler she has always been- spontaneous, impromptu and not very organized. But she did send me a photo of her standing under this tree and somewhere I still have that piece of paper with her picture on it. 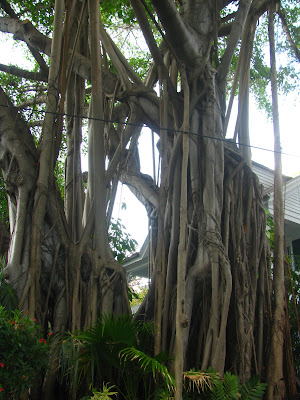 Banyans are, I believe, known as baobabs in some parts of the world and I do know these trees propagate by sending roots into the ground from their branches. Feel free to write in and correct me as I am still not a botanist. 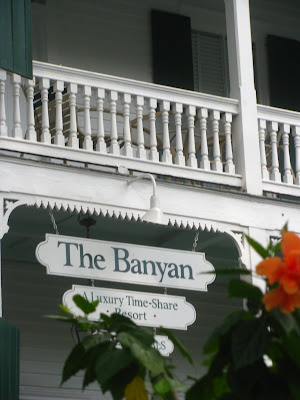 There was a guest house that took it's name from this landmark on Whitehead Street. According to it's own website (at the bottom of this page) the Banyan was created in 1980 from a group of 19th century homes situated here. 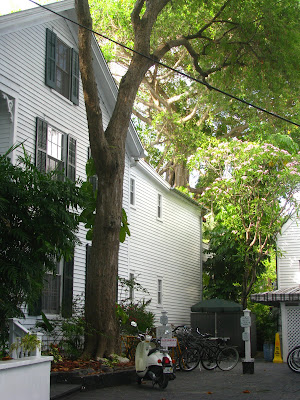 However the vagaries of chasing visitors apparently got tedious so they turned the place into a time share and that has worked well enough the time share expanded and is still here. The tree really is astonishing if you take the time to stop and look at it. Check out the weird shaped window in the back ground... Key West architecture at it's least rectangular! 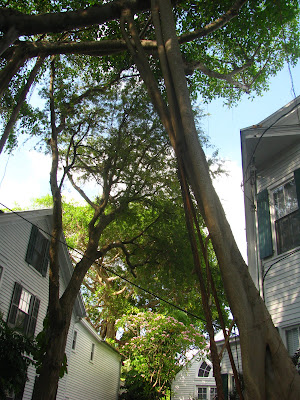 The slanting afternoon sun on Whitehead Street gives everything a lovely glowing look. 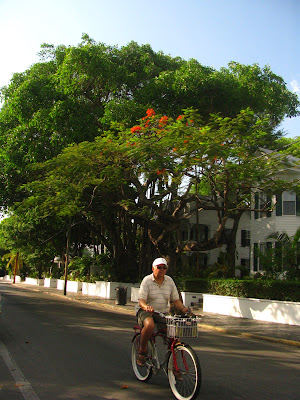 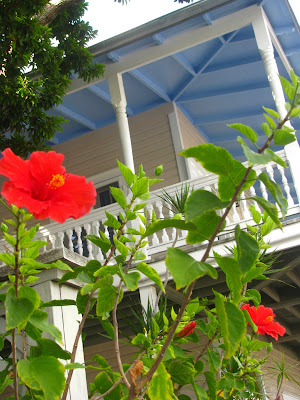 My bougainvillea is quite dead at home. I am the only person on the planet who cannot grow this lovely plant. 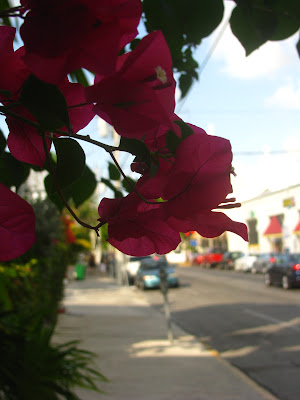 And walking slightly off Whitehead I was glad to notice Marilyn at the Tropic Art House Cinema is still drawing attention. 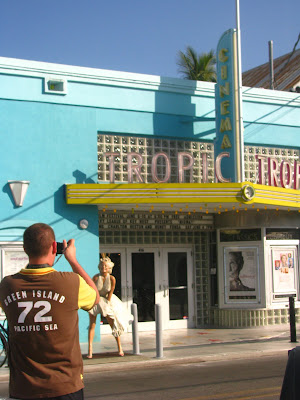 Summer colors in Key West, land of eternal sunshine.
http://www.thebanyanresort.com/
Posted by Conchscooter at 5:01 PM 1 comment: Links to this post

Night shift has been rather busy this past weekend and for that reason perhaps I have been alert and ready to go for a ride on my lunch breaks. 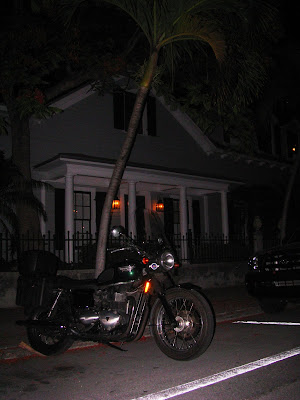 Sometimes nights drag and the minute hand barely seems to move on the office clock, and on other nights we barely sit down and it's time to go home. And yet the speed of the passage of time frequently has no correlation with how busy we are. However when things get busy I get a jolt of adrenaline and then suddenly I'm awake. A call for help about say, a room mate not breathing will do that. 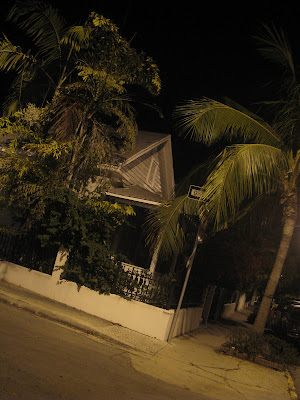 So a motor bike ride at 3 in the morning can be just the right tonic for an addled brain and fiddling with the camera and the tripod can sooth the most frazzled nerve. This here house put me in mind of The Rose Tattoo movie based on the Tennessee Williams work so I set the digital pocket camera to sepia and got this result. 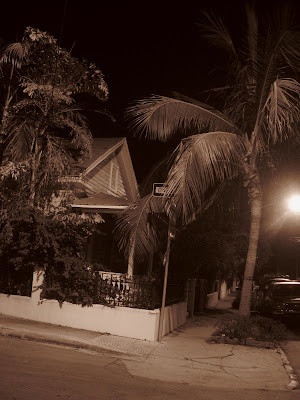 It is amazing what these modern camera can do and I am usually reluctant to play too much with the settings else the pictures end up being less a record of what one sees around the Keys and more a product of how clever one can be with the pixels. But I find the effects astonishing. 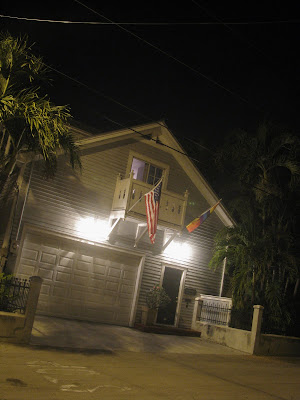 Sometimes well meaning people tell me I should be careful walking city streets late at night as though muggers lurk but I have never been molested ever by anyone. Perhaps I am too intimidating myself and the warnings are issued by people who have heard tales of a mad photographer wandering Key West at night muttering to himself. 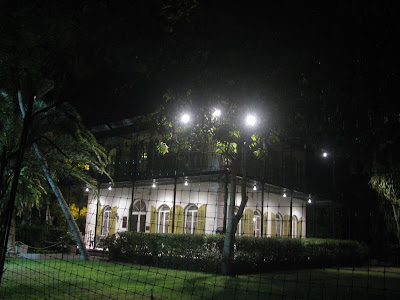 I think I tend to mutter to mutter to myself because it takes ages to set up the shot and choose the exposure, set the self timer and then get a picture that looks like crap. So then it has to be done again and again and the lunch hour passes. The picture above is the Hemingway House seen through the absurd cat fence erected to keep some snotty neighbors happy after they filed a lawsuit claiming the Hemingway House was "farming" by raising cats on the property. The US Department of Agriculture showed up like the passport inspectors in the movie "Passport to Pimlico" and solemnly ruled that the Hemingway cats do not constitute animal husbandry. No shit. I'm glad I'm not the only one living among rude neighbors. For my essay about the Hemingway House go here:

Sweet Tea's is a new restaurant on Upper Duval that is trying to make a go of a location that has had a few incarnations over the years. It was Alice's Restaurant named for Alice Weingarten most recently working with the Small Chef At Large on North Roosevelt. Then it became a Piano Bar named Keys. Now it is a Southern Comfort Food Place. 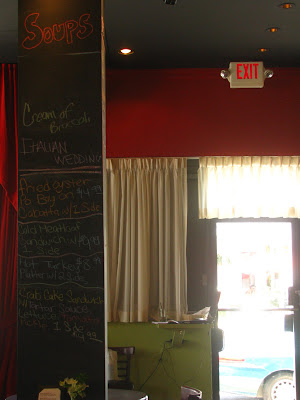 The chalk board on the column supporting the place gave me my inspiration for my first course. Italian Wedding Soup? Chuck laughed at me when I said I'd never had it in Italy growing up. "I've had it in Italy," he said, "Not from my part of the world," I said in my defense. We each had a bowl. 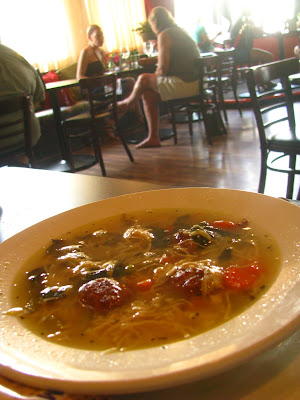 It was actually quite good, with meatballs and shredded chicken in broth. When I'm back in Italy this summer I shall ask my sisters about wedding soup. Perhaps I wasn't paying attention. 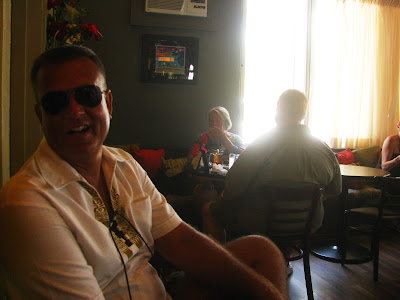 Chuck was a good sport as he'd been here before and allowed to fulfill a whim as my wife had eaten here and told me to check it out. For the main dish we both ordered the grilled cheese sandwich and I added a side of macaroni and cheese just because if I was going to try the place I wanted to know how their mac and cheese was. I like macaroni and cheese. 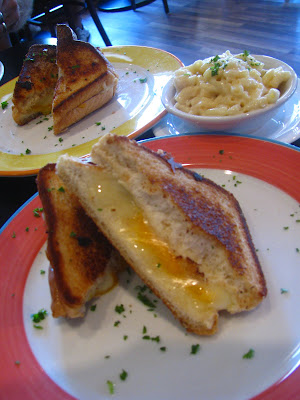 The food was fine, prices were reasonable amounting to $21 for lunch for two though I splurged and had iced tea while Chuck stayed with water only. They only offer sweetened tea which may be a nice gimmick but I prefer mine unsweetened. The atmosphere of the place is pleasantly subdued but we couldn't sit in the courtyard out back as they lacked the staff to serve us. 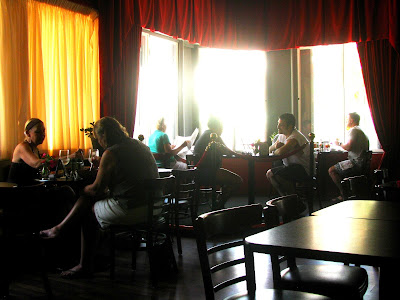 Chuck found the macaroni and cheese too soft, which is fair enough. I'd have liked more spice in my food, heavier cheeses and perhaps more pungent, Parmesan or smoked Gouda or something. But as was pointed out to me, these are yuppie tastes with nothing whatsoever to do with proper southern cooking. I yield to the more knowledgeable. I liked this place and I will return and I know my wife will be happy to meet me there. I enjoyed lunch with Chuck so perhaps it's just as well he's out of town for a bit.

Trip Advisor comments on the place are included here:

http://www.tripadvisor.com/Restaurant_Review-g34345-d2044103-Reviews-Sweet_Tea_s-Key_West_Florida_Keys_Florida.html
Posted by Conchscooter at 5:01 AM 3 comments: Links to this post

Duval Street slices across Key West from north to south, a distance of about 15 blocks, or about a mile and a quarter, or two kilometers if we are going to measure stuff in foreign. 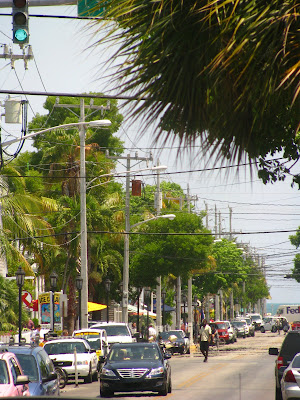 Because this is Key West, land of the inexplicable, the north end of Duval is Lower Duval haunt of the bars and t-shirt shops, while the Southern, more laid back end is Upper Duval. The bit in the middle where the most prominent gay hang outs are, is the neutral ground I suppose, though you would find that designation on any tourist literature. 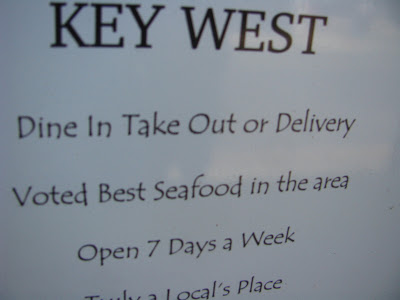 I really rather liked this sign - "Voted" by whom? ..."in the area." Really? I wonder which area that would be. "Truly a local's place" which if it were, it wouldn't need a sign. I think one reason why locals tend to despise visitors is thanks to the lead we get from our tourist affiliated enterprises. BS laid out to snare visitors just looks bad. 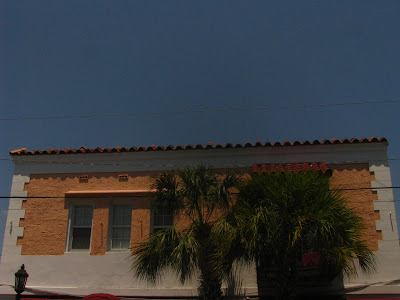 Anyway, as I was saying, Upper Duval seems to be getting busier and more interesting at the moment. There has always been a certain level of resentment that cruise ship business is directed at Lower Duval at the expense of enterprises down here but somehow this shortcoming is being turned to advantage. I'm not a shopper but Upper Duval has quality restaurants, decent shops, souvenir stores for sure but selling stuff that looks a cut above for the most part. There is the island's best ice cream at Flamingo Crossing and a civilized wine bar at Grand Vin where cigars are also fro sale for those that smoke them. I enjoy walking these blocks. 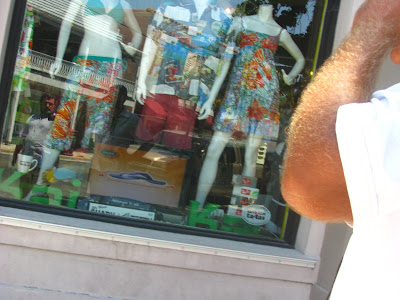 This used to ab an island institution called Valladares, and in the pre-Internet era made a living selling mainland news to visitors who wanted their New York Times and so forth. Now it has been occupied by knick knacks under new management. 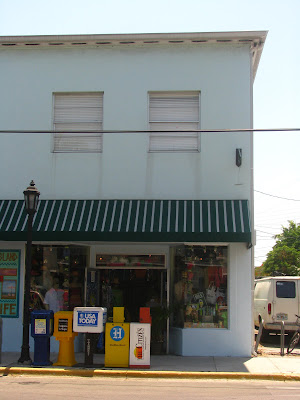 Change is good, though one has to wonder about that platitude sometimes. 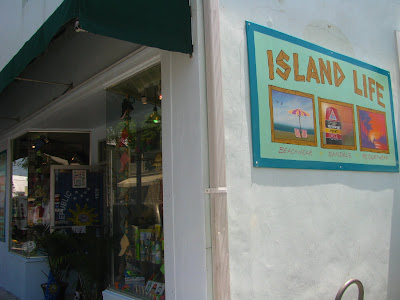 Duval Street was named for the first governor of the new Territory of Florida appointed to the post in 1822 by President Monroe. Key West was incorporated as the seat of Monroe County in 1828 and in those days Monroe was a huge expanse of wilderness across the southern half of this uninhabitable state. William P Duval was a native of Virginia where he inherited a plantation and gave his fortune to charities which it is said ended up impoverishing him. 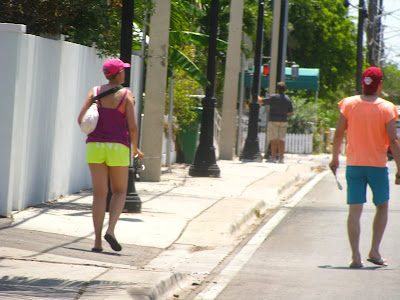 I am rather fond of Governor Duval who was repeatedly told by his autocratic father he was a "good for nothing" and one day on a whim when he was sent out for a log for the fire took off and didn't come home for twenty years. Whereupon he returned to Virgina, came through the back yard of his father's home, picked up a log and walked into the house putting the log on the fire without a word other than to tell his astonished family "There's the log you sent me out for." I wish I had had that wit when I returned home after 25 years away, wandering the world.
Posted by Conchscooter at 12:01 AM 1 comment: Links to this post