The Slow And The Dead

When I worked nights I frequently found myself on city streets at three in the morning unable to sleep on my nights off. Since moving to days walking Old Town at four in the morning doesn't happen very often. However with my wife out of town and Rusty always ready willing and able to walk there was no excuse not to go for  a stroll. I ended up wondering if I should have stayed home. 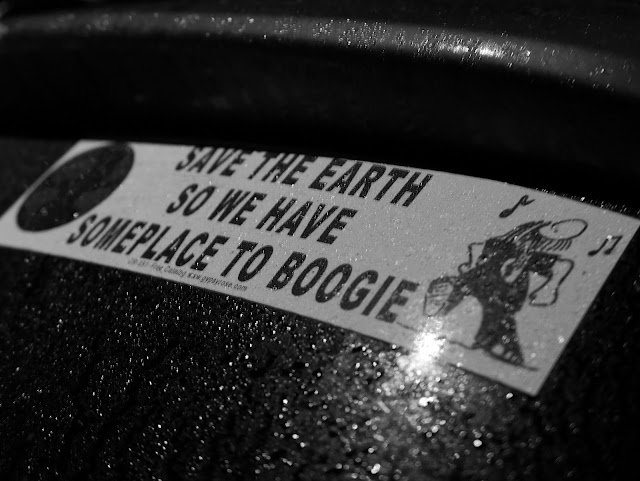 Before six in the morning in those hours of darkness when hangovers rule Key West I let Rusty run ahead off leash. In a world filled with busy bodies it gives him an opportunity to let off steam and it gives me an opportunity to make whatever pictures I want. That he sits on command and can observe traffic patterns without me fails to impress most modern fear filled Americans.But at this hour I can walk and think without submitting to the ignorance of the masses. And young Rusty can enjoy the fact he is no longer negotiating life and traffic on his own. The sexton's building at the cemetery main gate on Margaret Street: 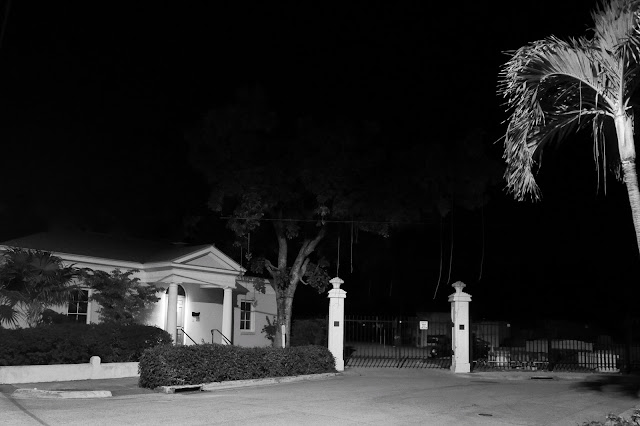 Why I wondered was a traffic cone on a  grave? An annoying vexing question with a stupifyingly banal answer no doubt. 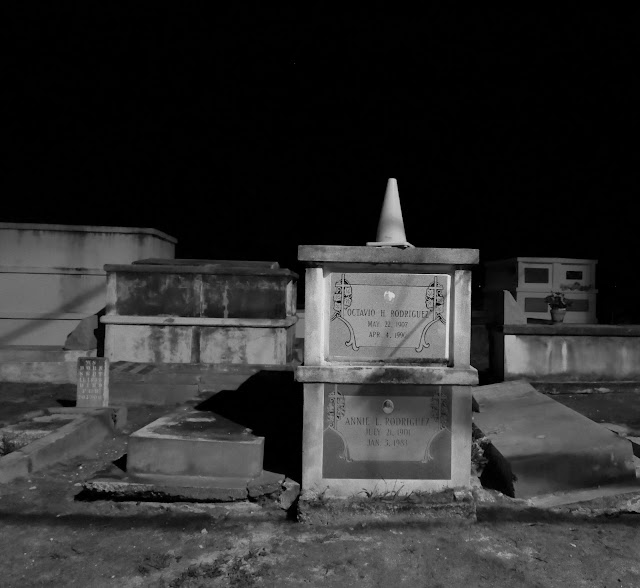 The cemetery offers much atmosphere even through the railings that surround it. I was standing on Passover Lane and all I could see was images. No ghosts were harmed in the making of these pictures. I believe so little in the supernatural that lost souls never make themselves known to me. 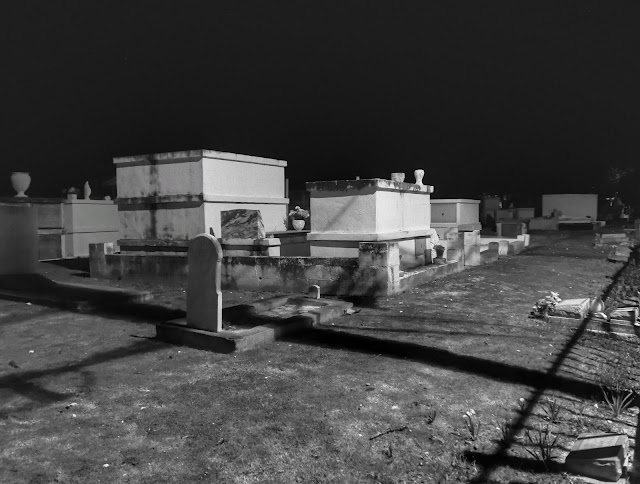 Flowers pinned to the fence attracted my attention: 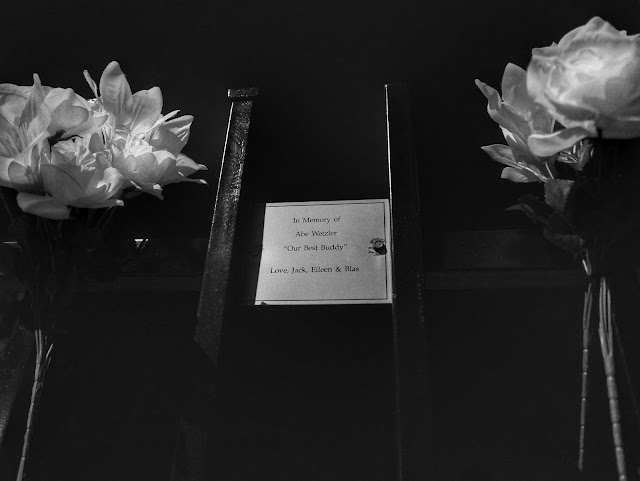 Moving on I find myself compelled to photograph empty silent streets at this hour, by now approaching six o'clock, the witching hour when people come back to life and start driving and making noise. Looking up Windsor Lane toward Solares Hill in the distance: 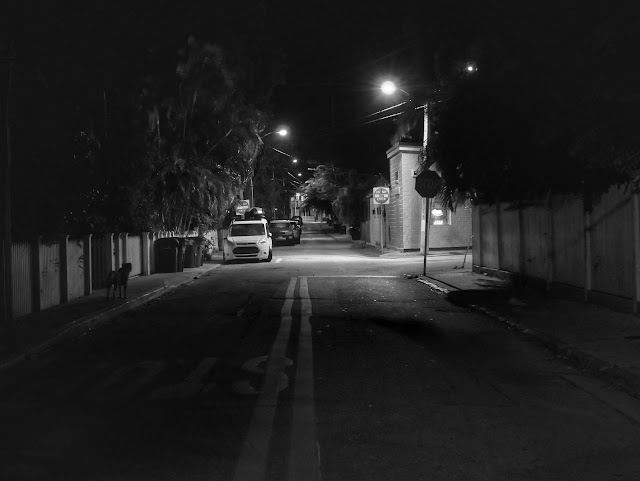 Ambling toward Truman Avenue I passed a Sprinter camper van with a luggage rack on the back filled with coconuts. People sometimes wonder why we chose a Promaster van over a Mercedes and the answers are clear enough in our heads, not least saving $30,000 in the purchase price and avoiding the expense and complexity of maintaining a modern clean burning diesel engine. I grew up in an era when diesels were solid reliable machines of no great performance and nowadays gasoline engines are the simple dependable alternative to diesel exhaust fuel and catalytic converters that have to be replaced periodically and all that stuff needed to reduce air pollution. I enjoyed the coconuts and stopped pondering another imponderable. 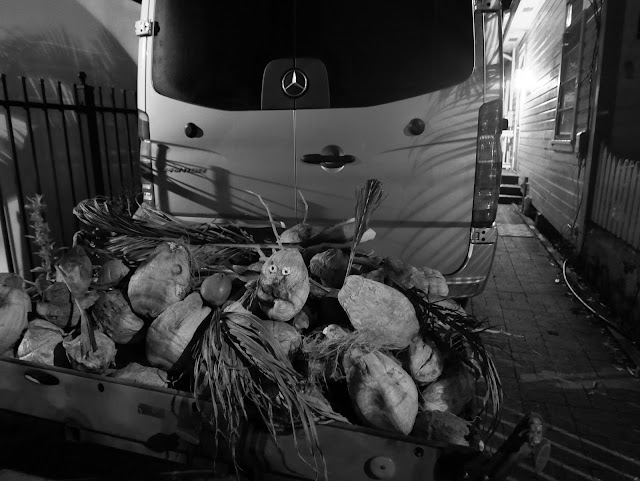 That was when the walk started to get weird. I was no longer alone when a voice called from the shadows to get my attention. No I said, I carry no money. Oddly enough in England I've heard street people take payments with credit cards nowadays when they are selling newspapers. Mind you the police in Britain now prosecute people for thought crimes so they live in a whole new world brave or fearsome as you may see it. Anyway back to the matter in hand. It sounds like the opening line to a joke: This guy walks up to me ans says... 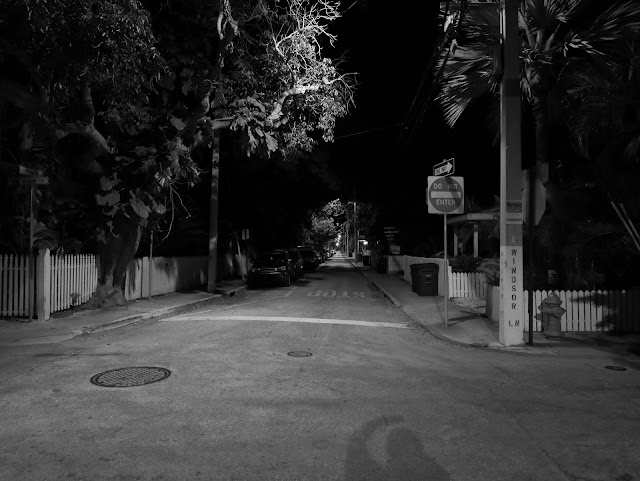 "Can I use your phone?" So I ask what the problem is and he manages to explain he left his phone in a  Pink Cab - You know Carl? he asked as though I have intimate knowledge of the city cab drivers' lives, though maybe he asked because I knew the number to Five Sixes off the top of my head. I asked the dispatcher who did not sound like a bright spark if he could ask Carl to look in his cab for a phone abandoned by a  distracted fare who was now hopping up and down in front of me worried sick. He seemed a little confused and slow, possibly helped along by too much alcohol, a common condition around here. 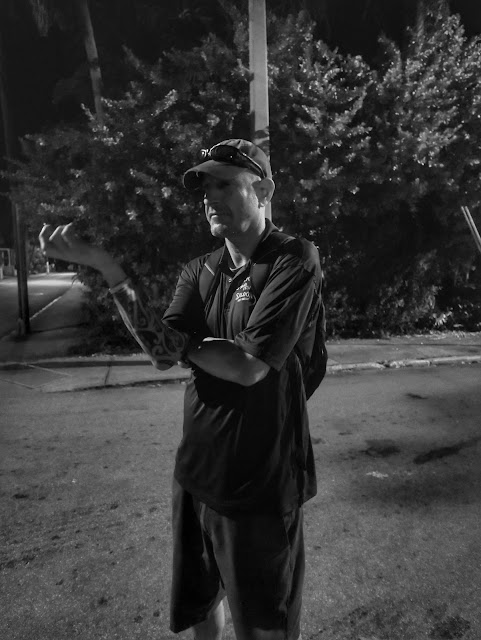 I think I got the message through to the dispatcher and I was surprised it took so much explaining to get the cab company to comprehend the problem.  I get these calls all the time at work and I call the cab companies for lost items every work day.  Indeed I was feeling rather grumpy that I was now doing my dispatch work for free in the middle of the street with an impatient dog sitting there looking hard at me. If your phone is so important, and mine is to me, how the hell do you forget it so easily? The last I saw he was crossing the street to waylay a fresh young thing he spotted over my shoulder to ask her to follow up my incompetent call and make assurance doubly sure. I fled, happy to be ignored suddenly. 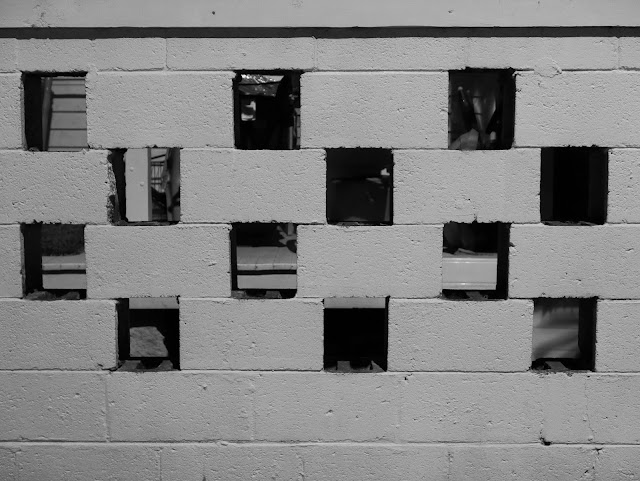 Not for long as a hooded figure shouted across Windsor Lane at me "Does your dog like cats?" Good Lord I thought to myself, two in one morning, really? At least she made no effort to extract money from me. She was freaking out that Rusty might invade the privacy of the cats she has been feeding for twenty years behind St Mary's. As obsessive and nuts as she was, she had a point. It was after six and clearly long past due time to put the cat eating hound from hell on his leash. As you can see this one bored into me with the piercing stare of a someone with only one thing on her mind: Her cats. I was reminded why I really like dispatching and not having to get any closer than the phone to the array of nutters who still hang on in Key West. 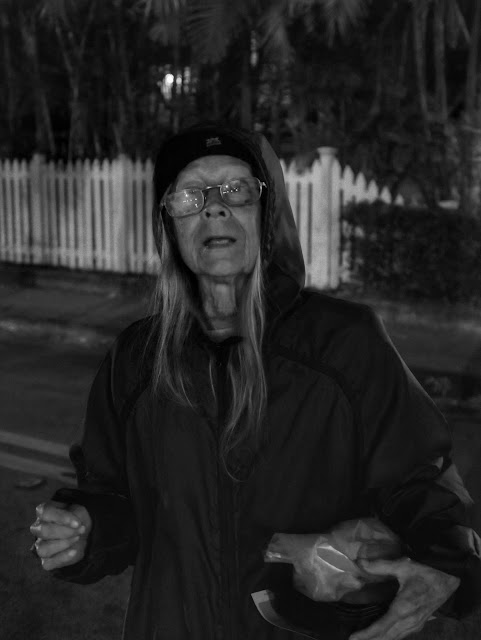 Rusty is scared of chickens and pretends to ignore cats who stare him down so her feline charges were quite safe but there are some people you just don't mess with and she was clearly one of them.  I engaged her in conversation for the hell of it, but it soon became clear we weren't going to figure out the meaning of life, and no it isn't cats. Call me nuts but I wish there were more like her in a town sliding into conformity and dopey adoration of mainstream reality. Key West could use a few more eccentrics. 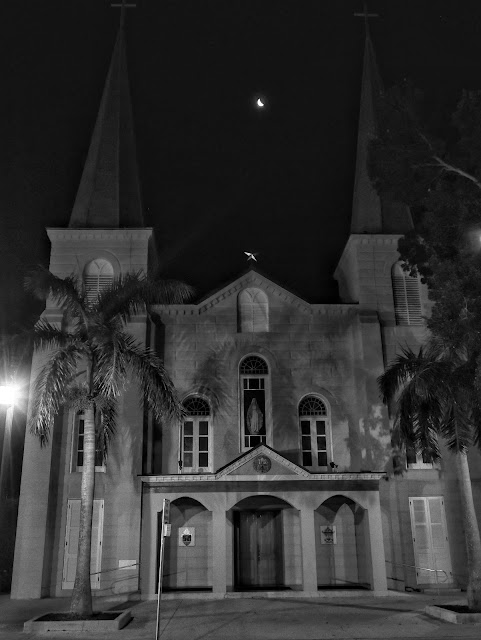 Sometimes my tourist disguise is a little too effective. On Saturday a smelly man came up to me with an ingratiating air and grabbed my hand -ugh!- and started talking rapidly and following me. So finally I turned and said I work for the police department.  That was all it took and he melted away. I didn't have time to get to the bit where I point out I'm a civilian phone answerer.  I need to get more mean my colleagues tell me when they laugh at my street encounters.  I don't think we need more meanness in the US just at the moment. 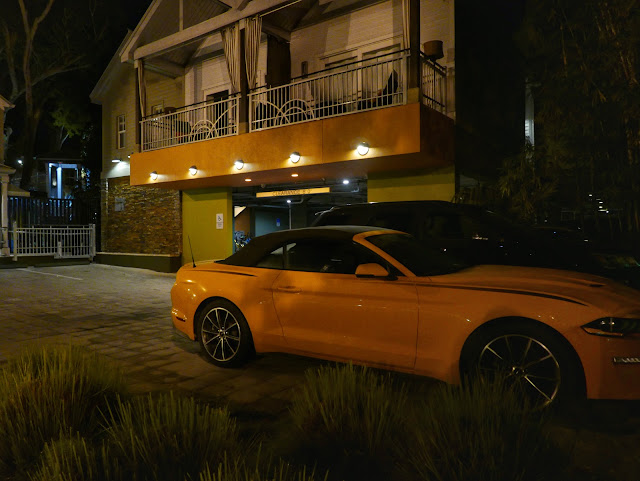 I get the feeling that living on the streets of Key West must be incredibly boring, no matter what anyone tells me. We are told most homeless have mental issues but they can't get help so there they go aimless drifting day and night after day and night. So if feeding cats give you purpose then I guess more power to you and in the matter of dealing with people versus animals I'm on the cat lady's side. They fed Rusty when he was on the streets but with the ultimate goal of getting him into a home which he seems to enjoy and that must be why I prefer dogs to feral cats. Perhaps one day I shall fade away into the dog feeding equivalent of a cat lady. Meeting these people on the streets is making me maudlin which  probably means I'm going to attract another call at work from the mad electron woman who thinks her ex is sending her messages through her TV streaming service by subverting her internet account. Or the other one who thinks her neighbor is preventing her from sleeping by sending musical vibes through the wall separating their apartments by wires inserted into her pillow. Lucky for both of them they have enough money to keep them off the streets, for now. I prefer the endless parking violation calls between feuding neighbors. At least parking problems I can understand. And don't forget the reason why I like the cemetery is that dead people have no problems that prompt them to call 911.
Posted by Conchscooter at 12:00 AM 6 comments: