By Land And Sea

There are days that take my breath away in the Keys, and despite the multitudes of photos on this page, I do not manage to capture all those moments in pixels. Sometimes when I'm riding the highway I am reluctant to stop, turn around, park the cycle and look for the opening through the mangroves to the horizon. So I lose the moment. But with Cheyenne slowing down a bit I get different kind of moments when on foot. 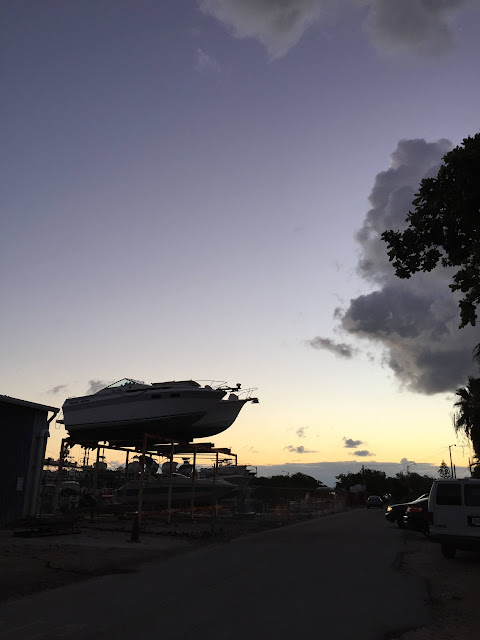 I surprise myself sometimes by finding what I think is picturesque in the mundane. A boat stored in the air on Stock Island is an intriguing shadow, even though it is just one more  machine stored waiting for use. Eventually. My own boat hasn't seen much use this summer, Cudjoe Bay lacks destinations for me, and as far as swimming goes our canal is ideal, mostly free of traffic, deep and easy accessible from the dock behind our house. Then I saw people living in the water: 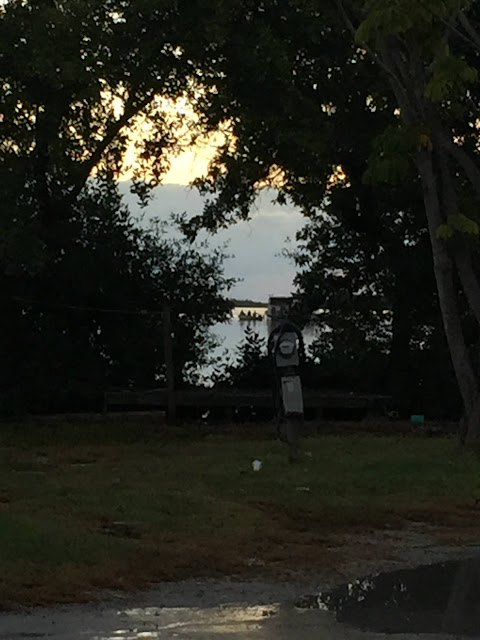 The dinghy loaded up with people and slowly puttered out of my field of vision, boat dwellers on their way to mundane life ashore, the place where they store boats in the air, not on the water. Some days I miss the apparent simplicity of living aboard, like the other day when a neighbor came to complain about non native vegetation in my (landlord's) yard. On a boat Brazilian Peppers aren't an issue- ever. Other things are though, and I don't want to enumerate them as that would get tedious but believe me, living on a boat at anchor isn't all beer and skittles. But it sure looks pretty: 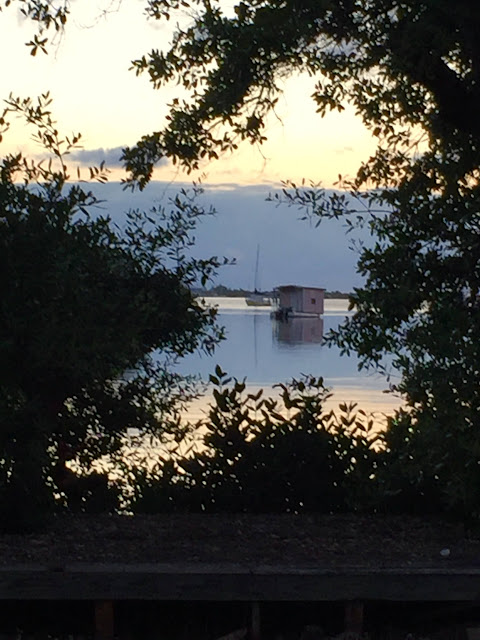 Good Lord, the Keys are easy... take a garden shed, stick it on a Hobie Cat or nearest equivalent and you have a  home riding the gentle tides. No fog, snow or ice, no monster winds, except occasionally which also blow away houses from time to time. Living aboard here is not the hardest life of all.  Life on land gets pretty messy too. Would you rather live in a flimsy boat on pristine water or in this sort of chaos? 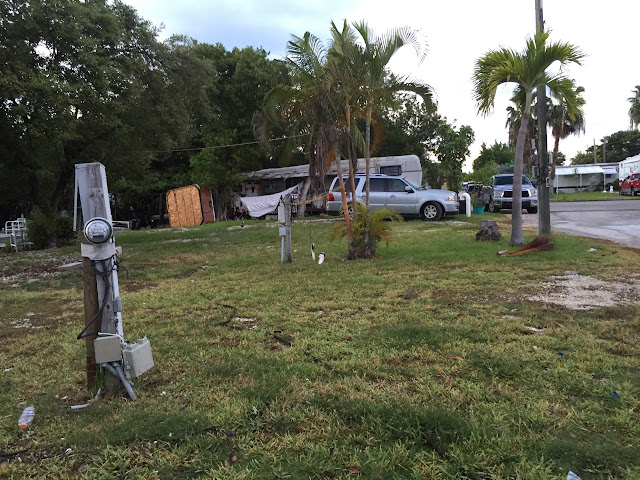 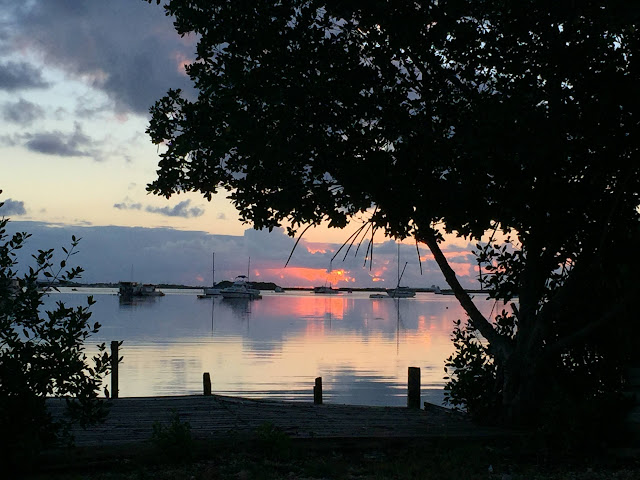 Or this where puddles and abandoned wrecks litter the landscape? There is purity in living on the water. 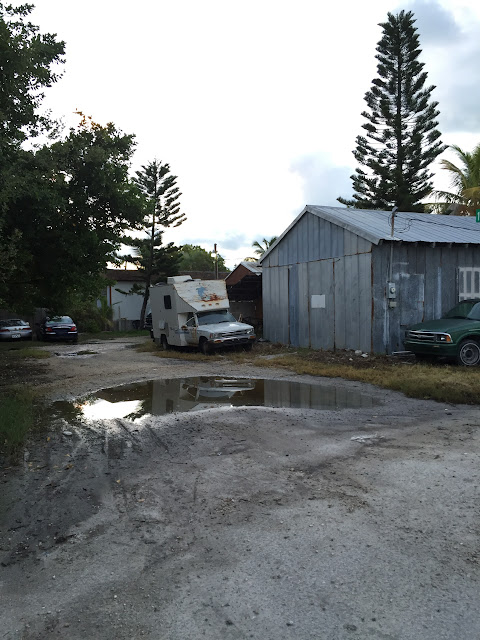 Cheyenne very much likes these kinds of places because she never knows what she will find. I like them because they remind me not everywhere is gentrified. Yet. 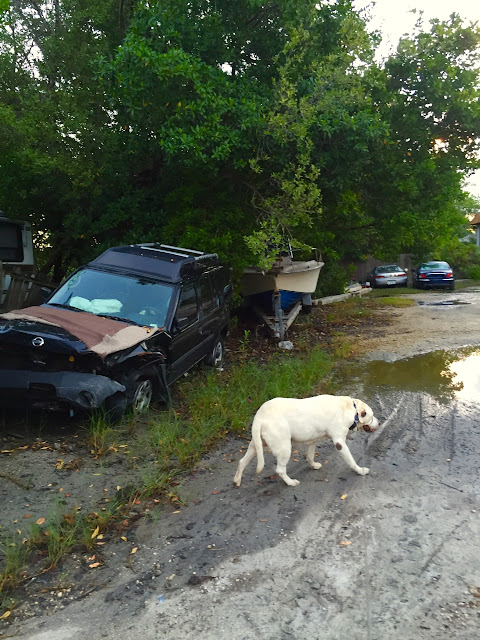 Chickens, ducks, iguana or cats, Cheyenne is indifferent to them all. She hunts prey that has been killed cleaned and cooked and then discarded and she is surprisingly successful. The Muscovy ducks strutted away with all dignity intact as she zigged and zagged across the street. 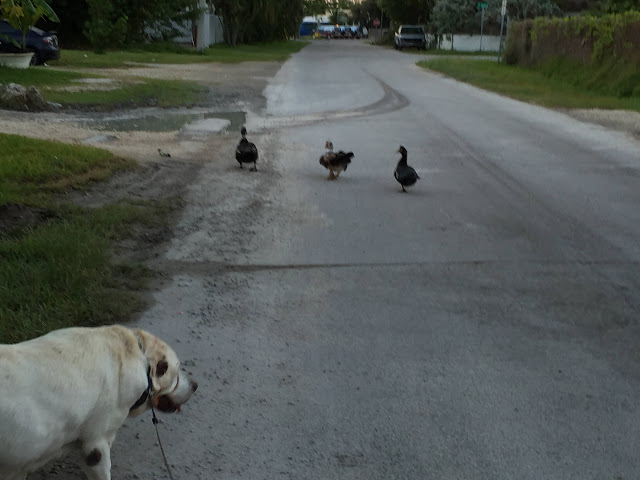 I'm trying to remember the last time I was outside Florida, this year has been unsatisfying for the traveler in me. It's not that I don't want to be here, but from time to time I do like to be elsewhere.  I find the idea of not leaving the Lower Keys from one year's end to the next to be grotesque. I think of all the things I miss by being here...not the people as I like the people here more than I do in most other places. There are no true forests in the Keys, no lakes, no hills, no tree covered roads, no winding rolling country lanes. There are mangroves and palms, amazing waters, and a certain amount of visual uniformity that takes getting used to. I change it up a bit by using a camera lense to see things though some people  might find that odd. 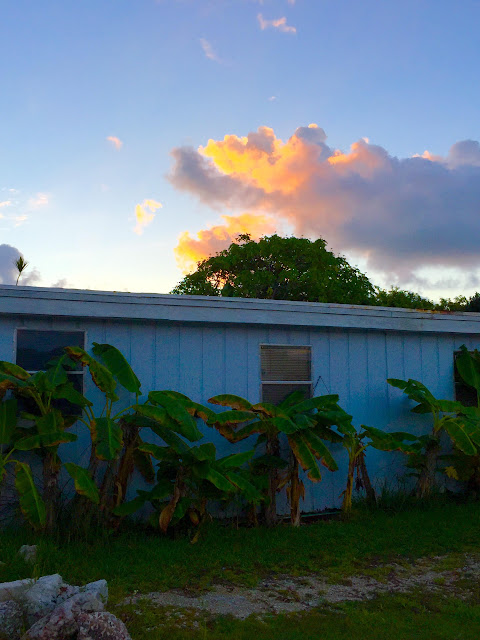 If the Lower Keys truly were an island I doubt I could live here. Being able to get on the road and reach California even, without asking or seeking permission or paying for a travel ticket, by sea or air, makes this place properly connected even if remote. I wouldn't mind a hill though, a high spot with a winding road to get to a belvedere at the top, likely selling refreshments in the breeze. Instead we get hump backed bridges. But the Keys are decidedly part of the US, with baseball diamonds school buses, dollar bills and cellphones just like "back home." 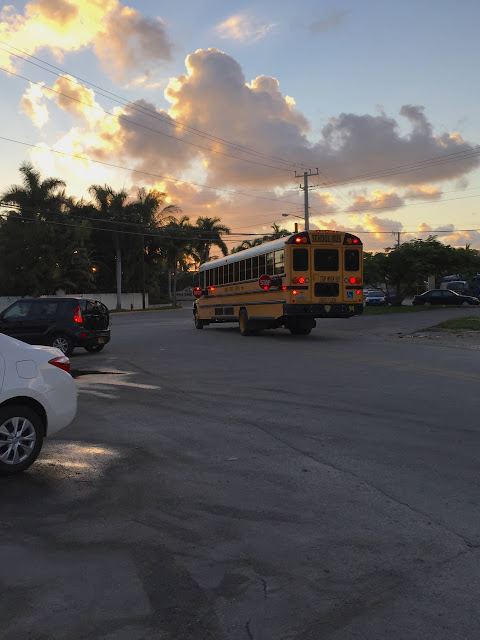 In the Keys going to work is the same old chore, perhaps noticeably nicer thanks to a shortage of ice or frost or snow, though some people like that stuff. You bring a lunch box and wait around for your ride to take you to your workplace. Just like they do in Pullman, Pittsburgh or Pensacola. It's true, you might be a bi-lingual fifth generation Conch, but the idea remains the same, work is work. And behind you, unnoticed thanks to your routine, the sun rises on a brilliant sparkling new day illuminating Fall foliage that never yields to seasonal changes of color. 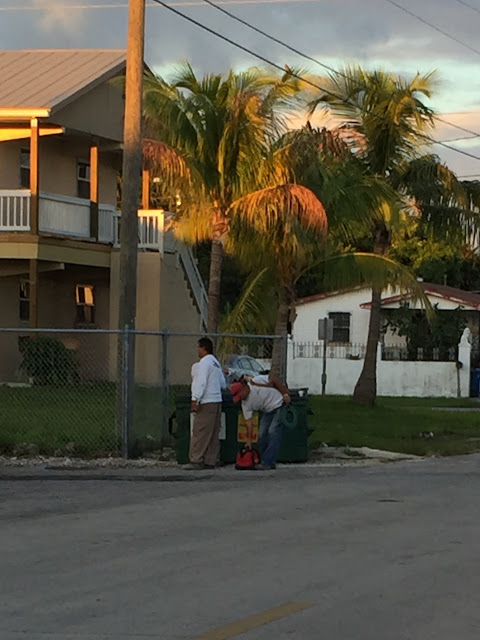 El Senor Boungy apparently ran out of steam and because I liked the way they finished out his term in matching red paint I went looking for him. This obituary in the Key West Citizen explains all:


Emigdio A. Gil, 69, of Key West, Fla., passed away on Friday, Nov. 15, 2013, at the Hospice Care Center in Brooksville, Fla. He was born on July 27, 1944, in Tampa, Fla., to the late Antonio and Cathy Gil.
Emigdio, also known as Tony or El Senior Boungy, was part owner of Tony's Roofing Company. He was a past president and member of the Jaycees, the American Legion, the Civil Service Board, Contractor's Board, the Elks Club, Moose Lodge and also served as a Mason. He will be missed by all of his friends and family and all the jokes that he used to tell. 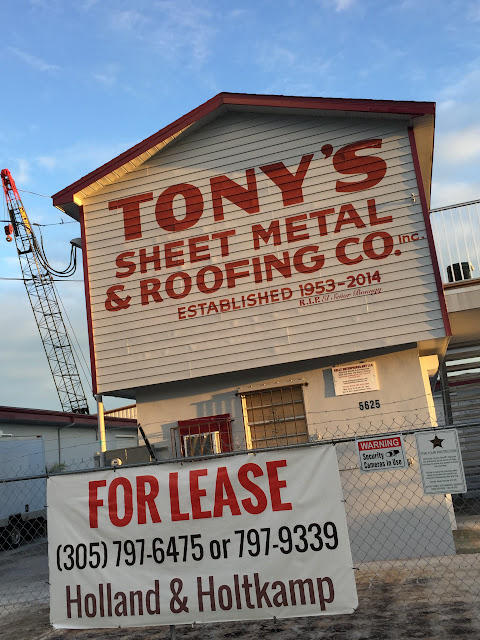 Too bad his business had to close.