Layne and I have been debating whether we want to drive Central America after we visit Alaska or if we want to ship the golden van from Florida to Colombia in Central America. If you don't know why the road ends in Panama you might want to Google the Darién Gap. On the con side we have already sailed and driven much of the area, including this trip down memory lane from January 2000. The pro side of driving is because we remember Central America so fondly. 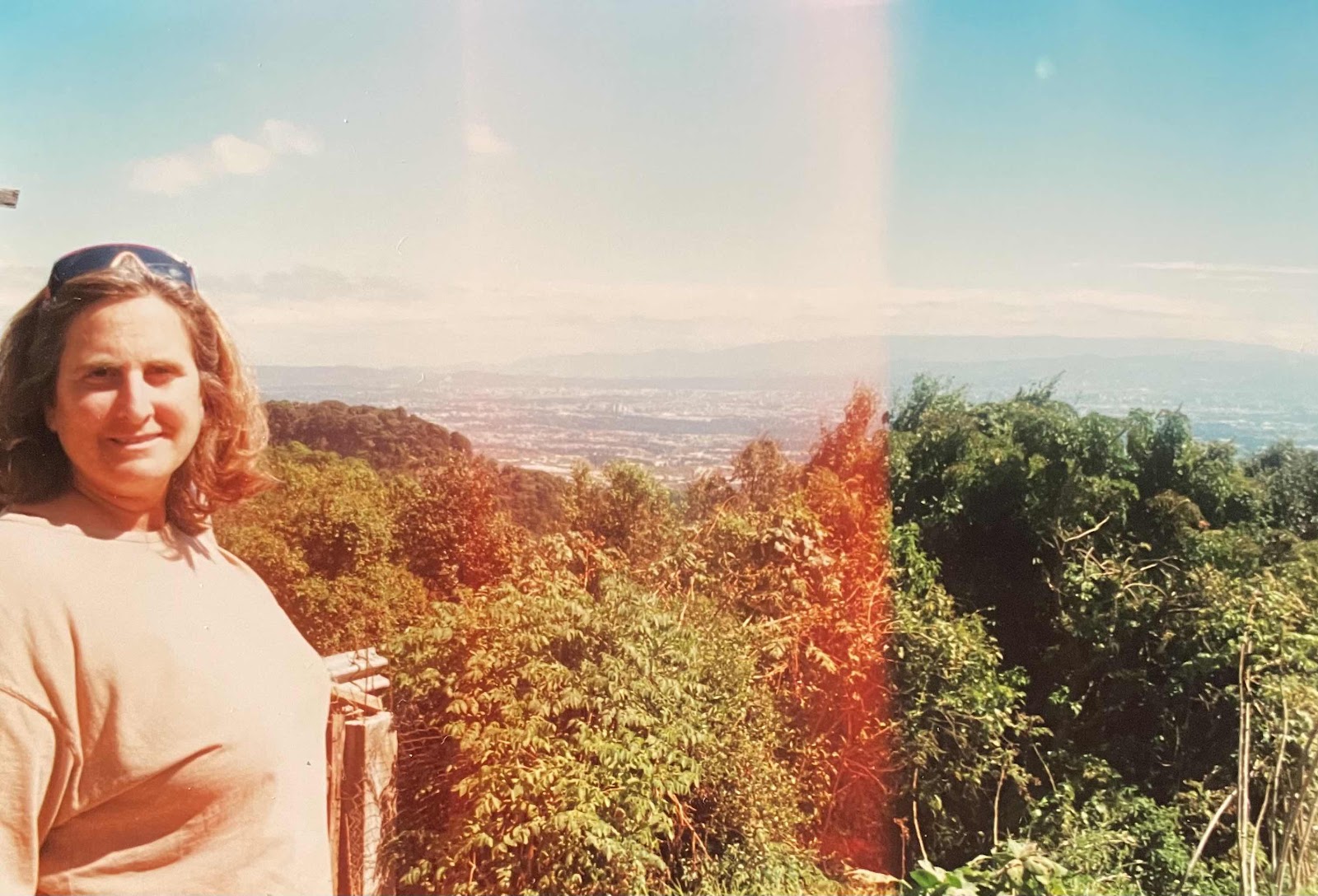 We parked our Gemini catamaran in a marina on the Rio Dulce and rented a compact car wherein we put Emma and Debs on the back seat and took off for places already fondly remembered by my wife who explored this part of the world in her twenties. 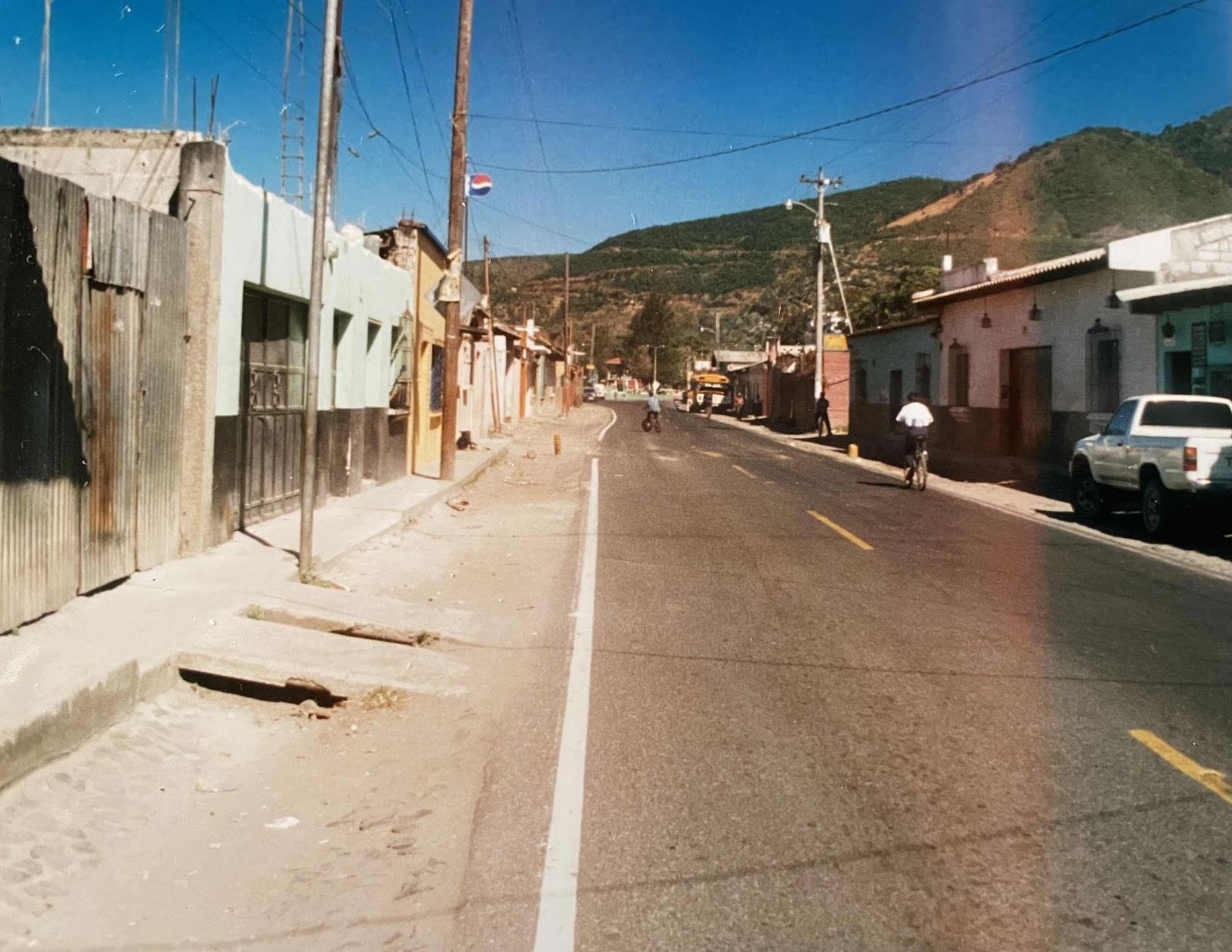 The interior of Guatemala is a world unto itself, a region of high granite mountains, volcanoes, pine forests and amazing lakes. The roads twenty years ago were very easy to drive, well paved and winding like Alpine roads in any mountain range you may have driven. The dogs loved the cool weather and as long as the sun was up we enjoyed the change as well. 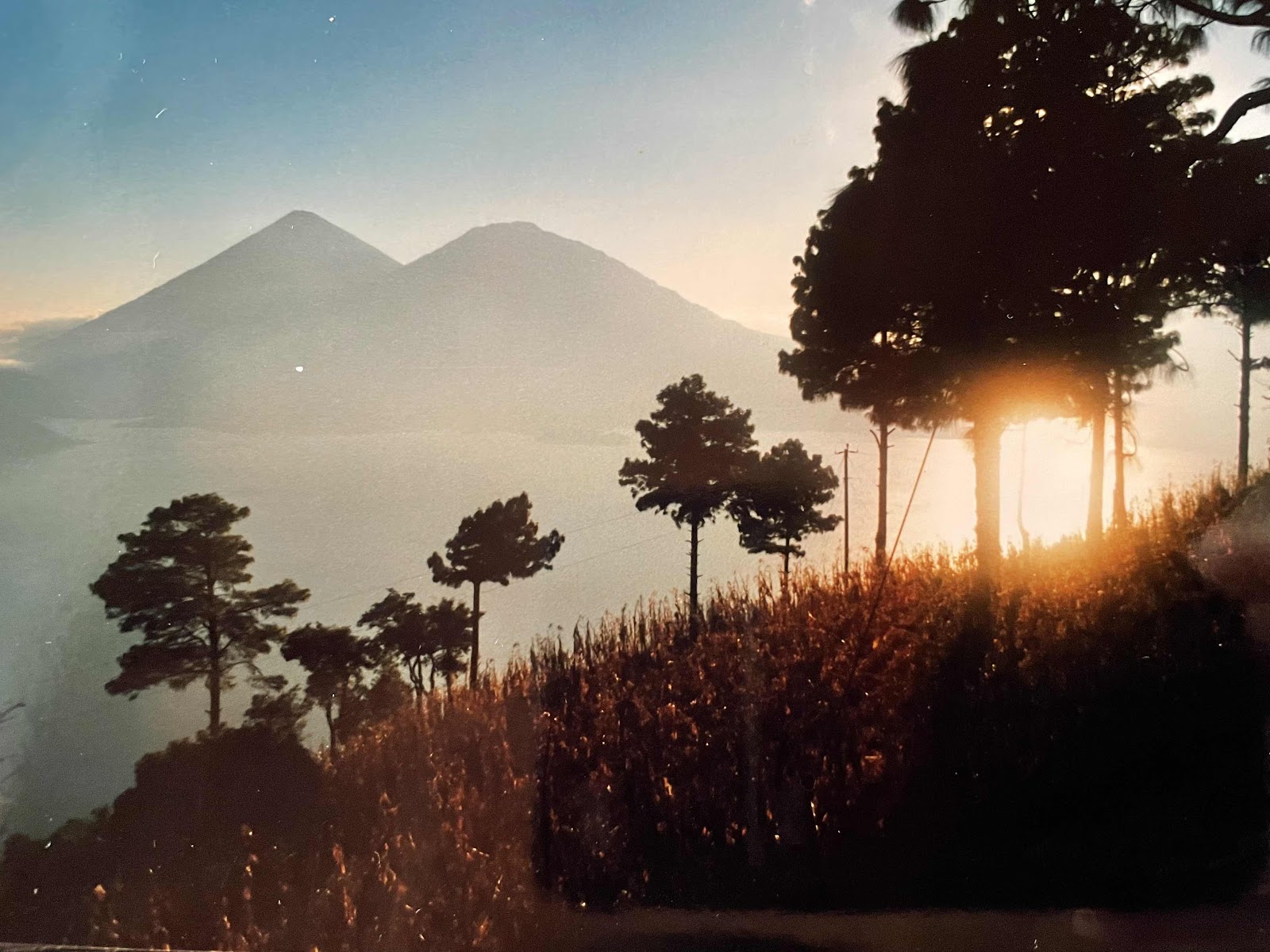 Pardon my crappy camera but take my word these places were lovely. The British writer Aldous Huxley, author of a book for our times titled Brave New World, a dystopian novel, characterizes Lake Atitlan as too much of a good thing while the explorer Alexander von Humboldt called it the most beautiful lake in the world. 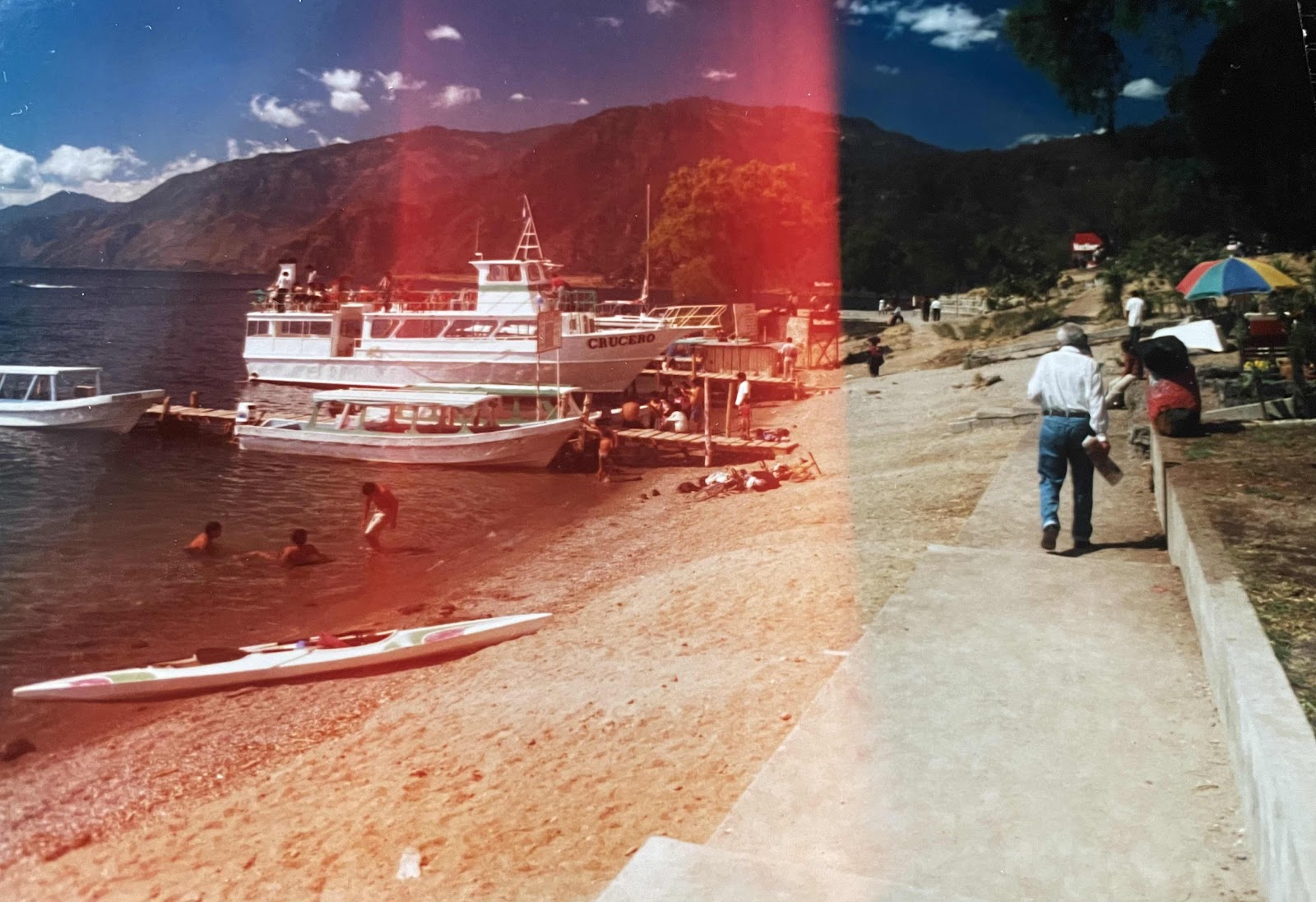 Let us accept that this overblown praise sets the lake up to fail but it was beautiful. There were ferries to isolated communities across the lake but with two large dogs in tow the idea of an expedition was a bit overwhelming.  We were running out of money and already we had a place to stay in Panajachel so we remained on our side of the lake, which was plenty. 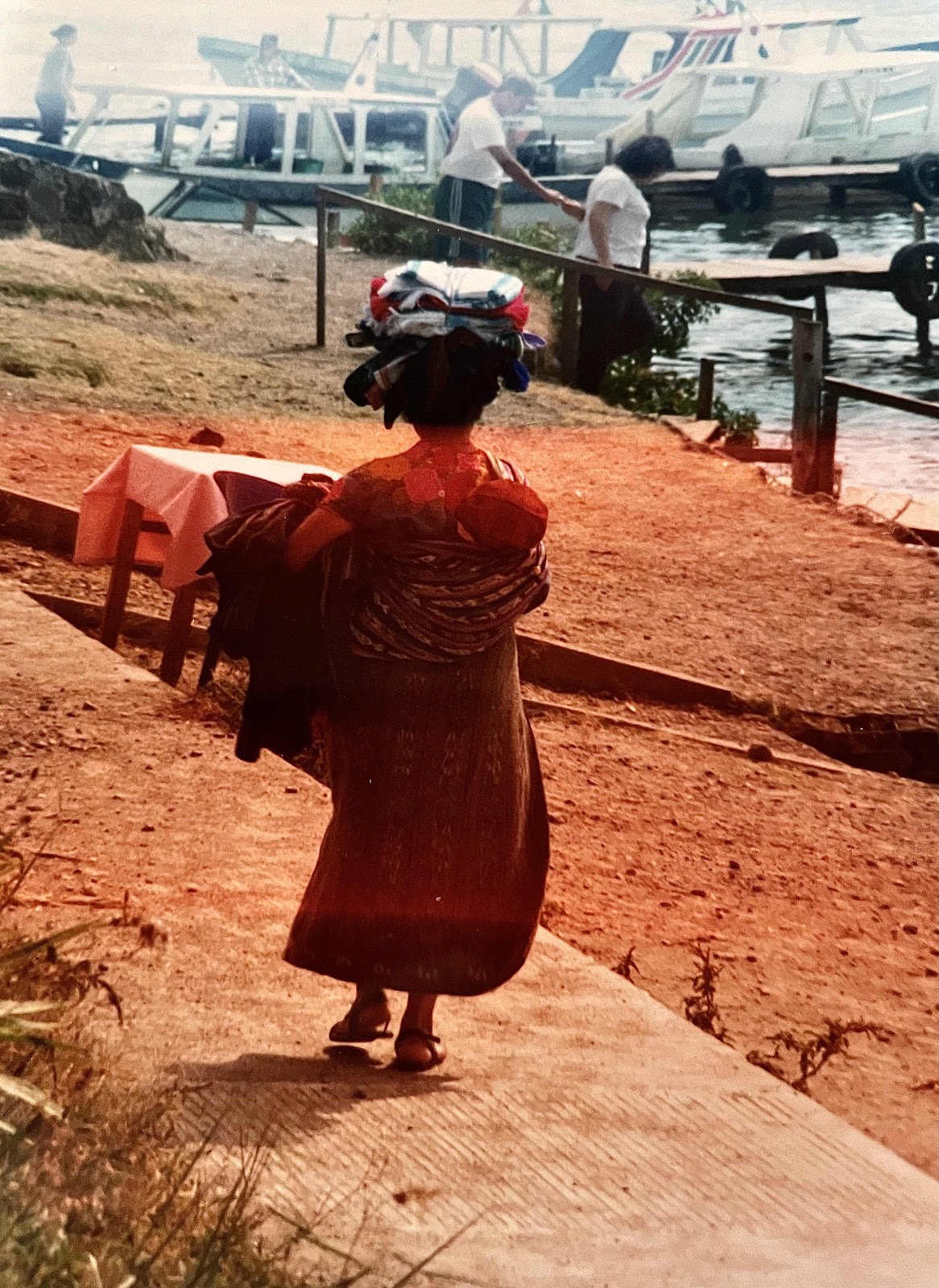 Driving through the mountains was tremendous fun, stopping to walk the dogs, do a little roadside shopping or to take in the views. So very different from the coastal areas we had admired from the deck of our boat. 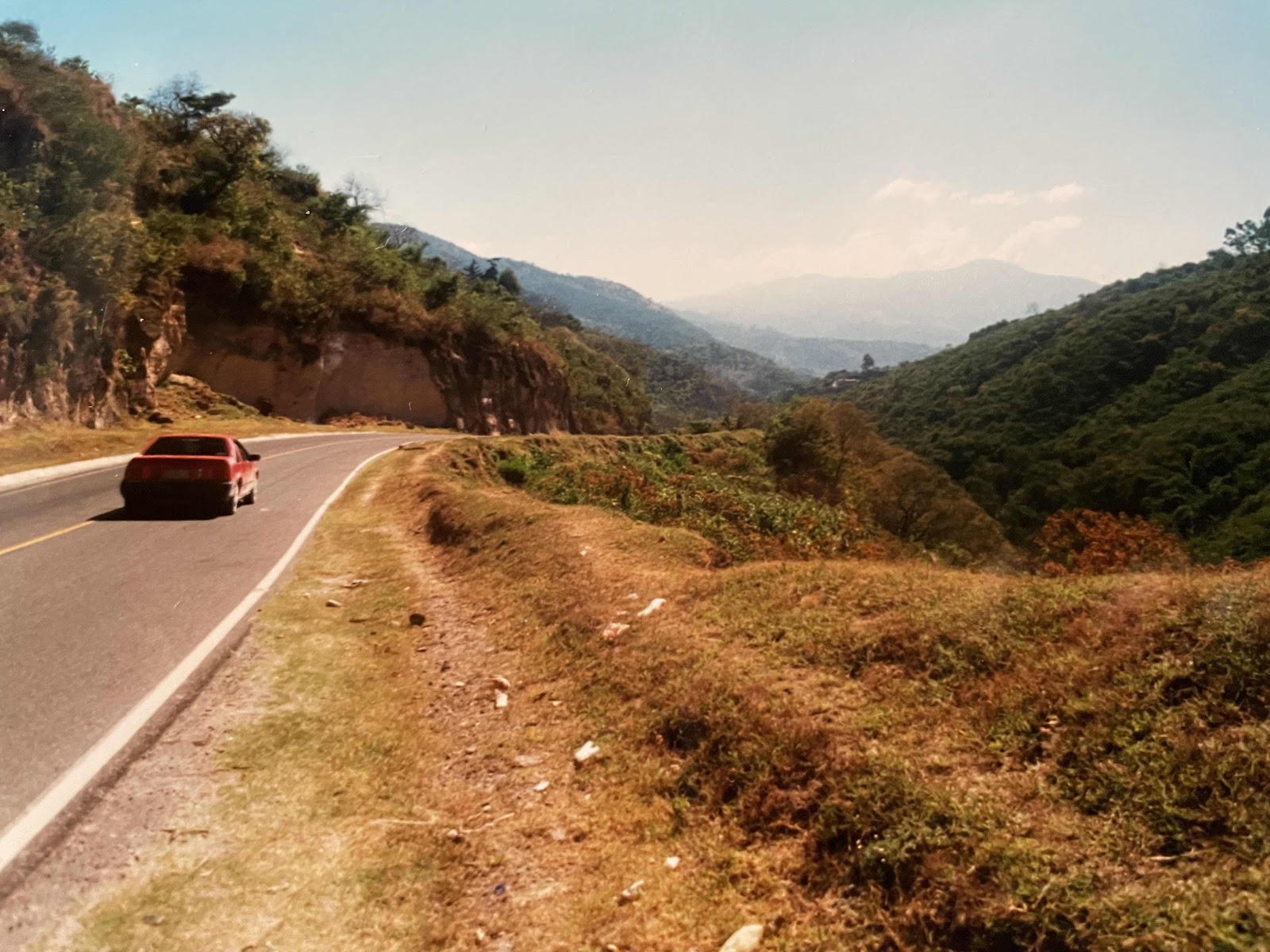 We stopped in the market town oc Chichicastenango a place fondly remembered by my wife and the four of us explored the market and did some window shopping. 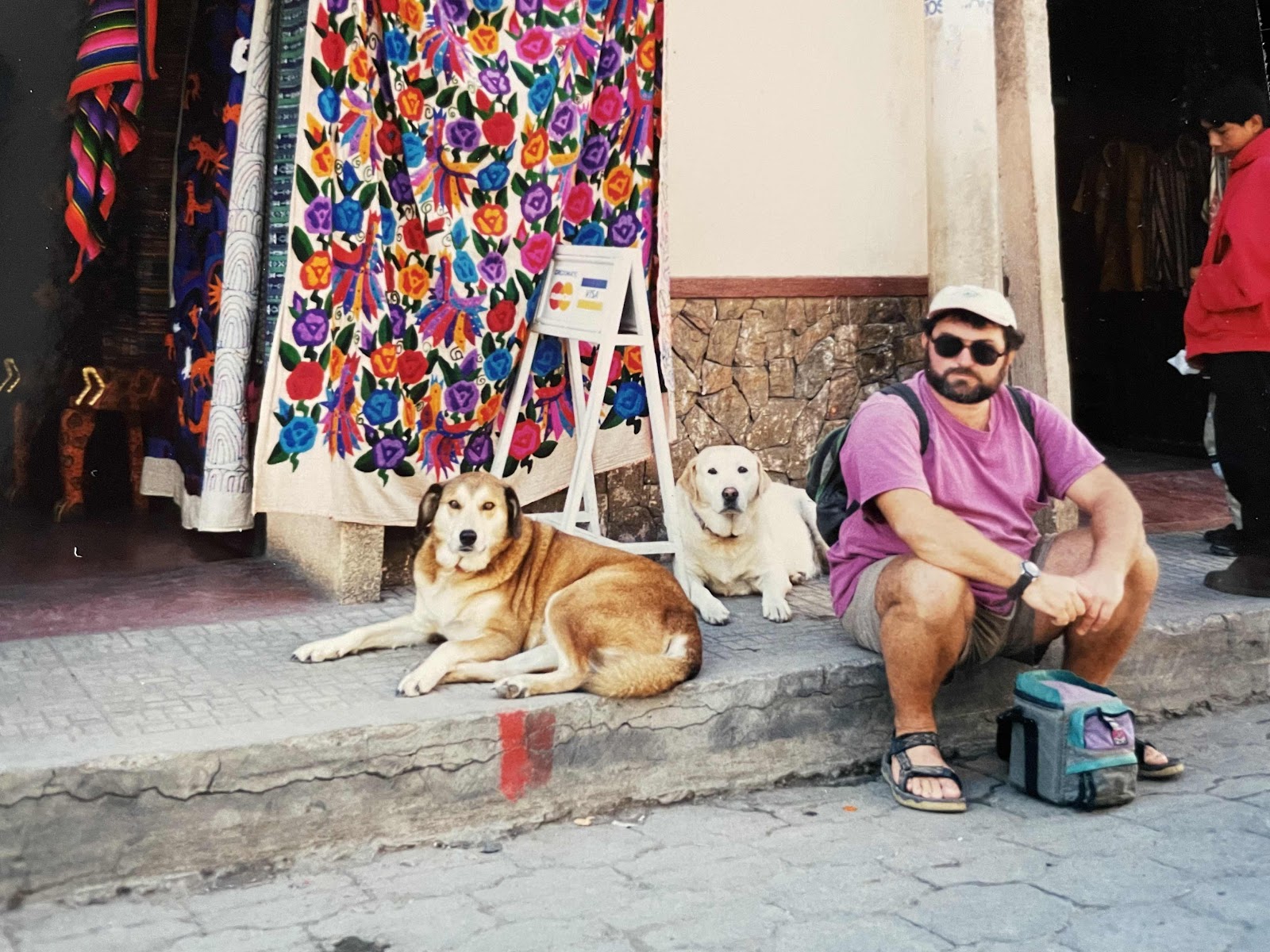 The dogs were expert navigators by now and we kept an eye on each other as we took in the sights. The locals weren't in the least perturbed by the sight of these huge animals loose among them. As I have explained previously it was fatal to leash them as then they inspired terror- why else would you leash a dog if it weren't dangerous? 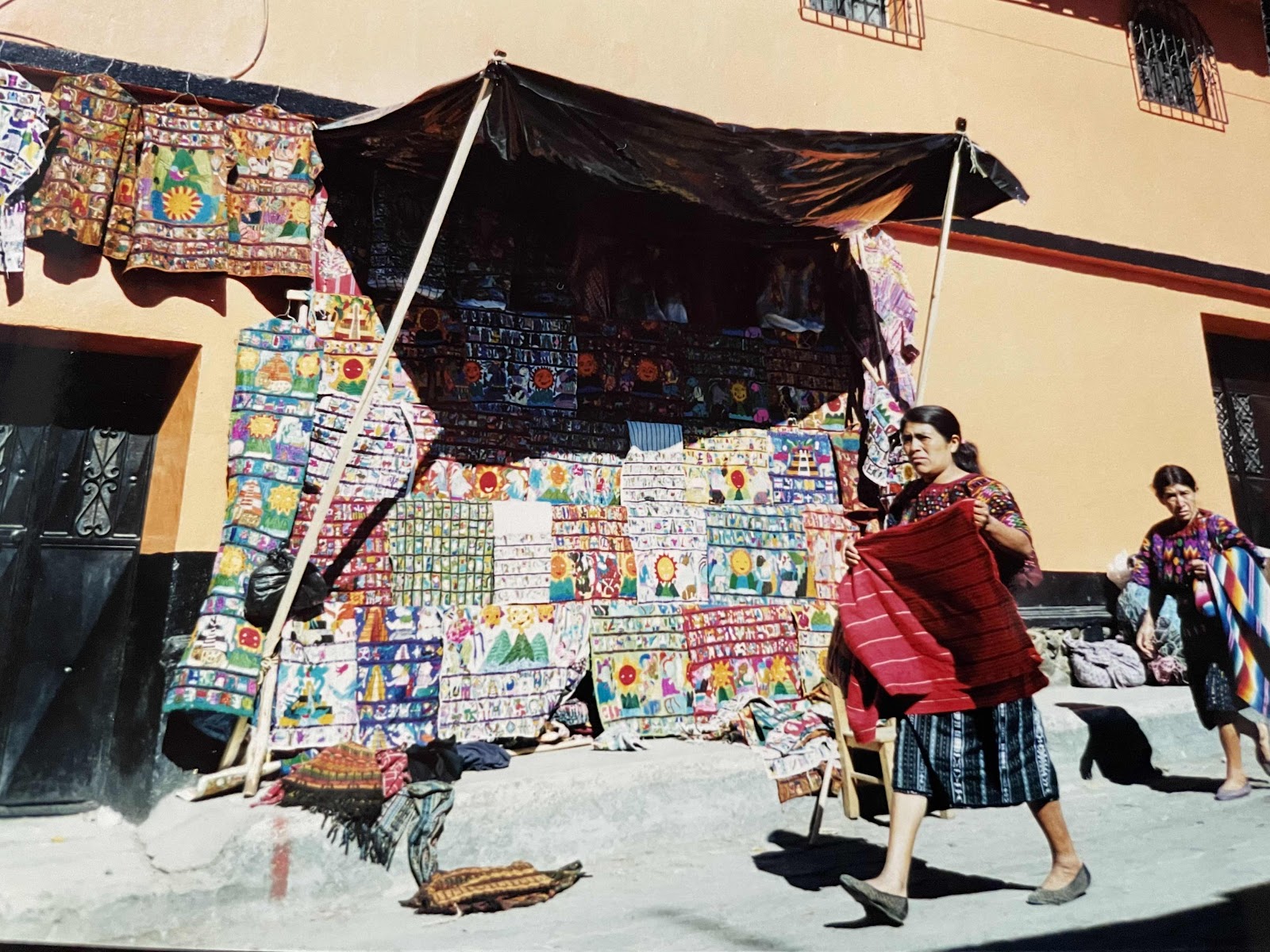 And indeed they accepted the attention with good grace. 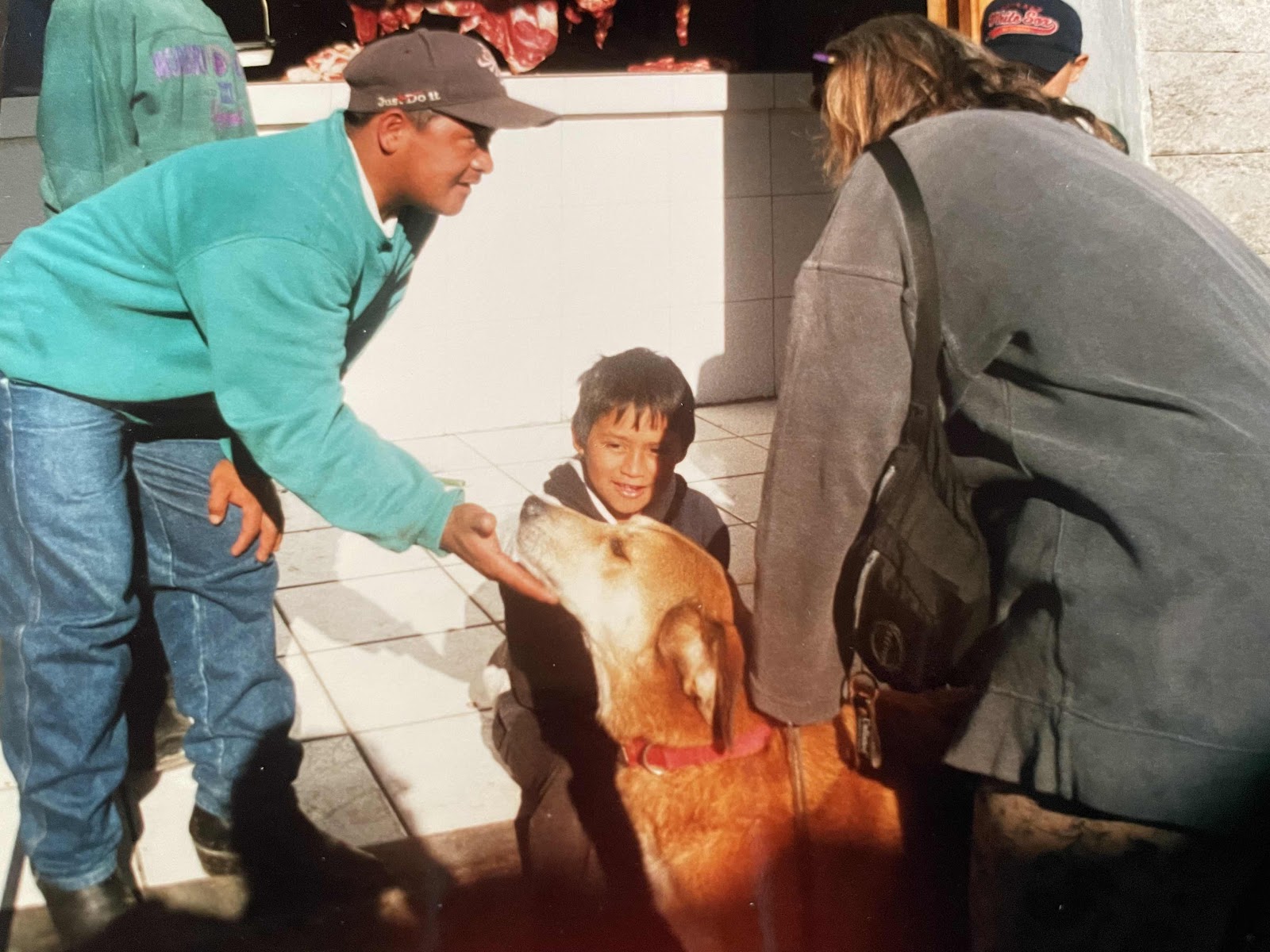 Central American street food is always a draw,  roast corn with cheese and chili peppers, shaved ice, green mangoes with salt and lime juice, there was always something to snack on as we walked. 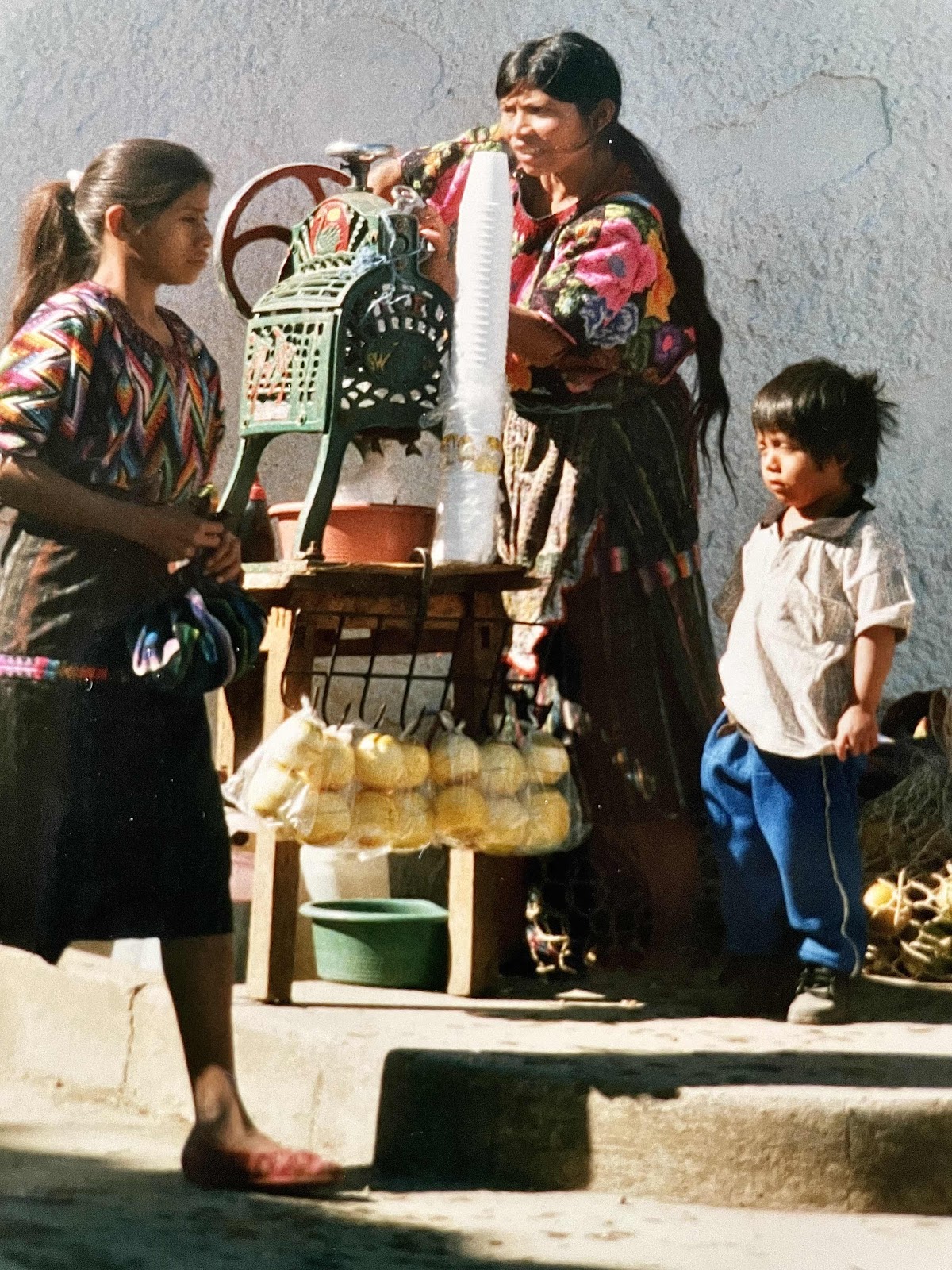 Bear in mind a lot of these people don't even speak Spanish as they live isolated lives in the mountains. In those days they were lucky to have electricity and cold running water in their villages. Never mind a Spanish speaking teacher to educate their children in the ways of the outside world. Quechua is a language from the era of the Inca and the Maya and the world smashed by the Spanish invaders. 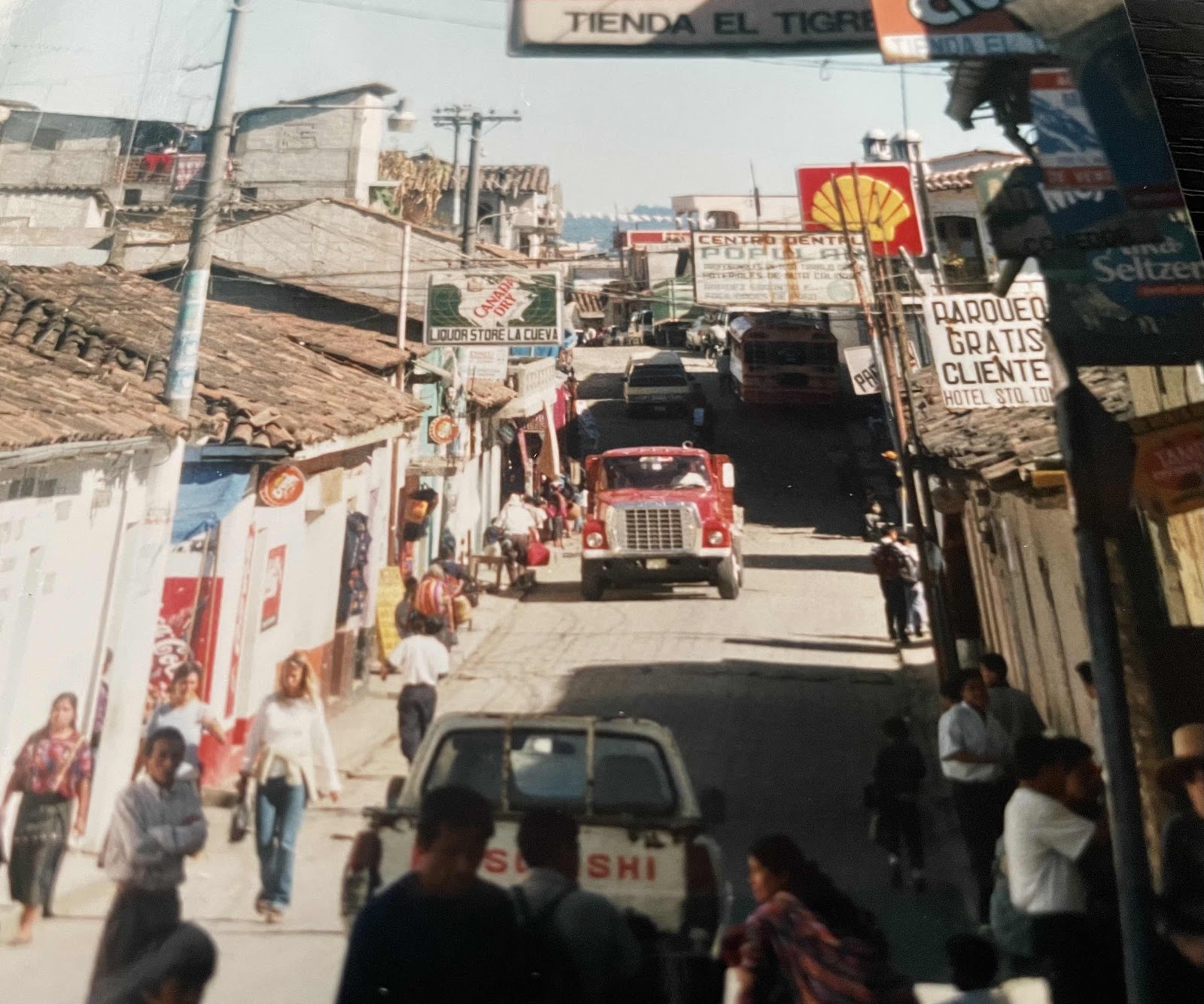 Even then the locals hauled tons of stuff on their heads just like their ancestors. Workmen carried a bandana and could be hired to put a preposterously heavy load on their heads and walk slowly and steadily to wherever the load needed to be carried. They were quite amazing, especially as at those high elevations we youngsters had to pause to catch our breaths. 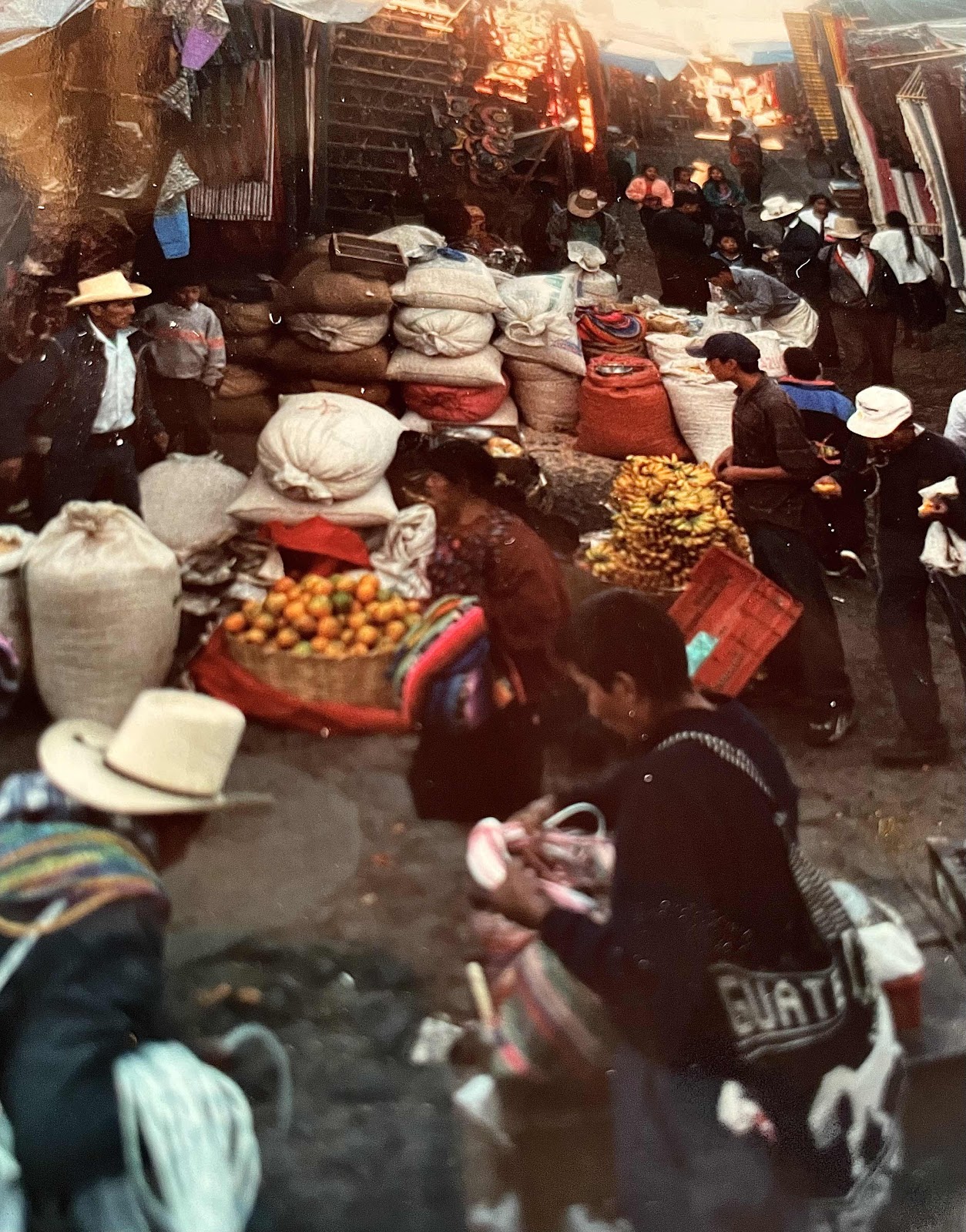 Nights were absolutely awful. We shivered under inadequate blankets in hotels that were dog friendly and we piled the dogs on the bed with us in an effort to keep warm. 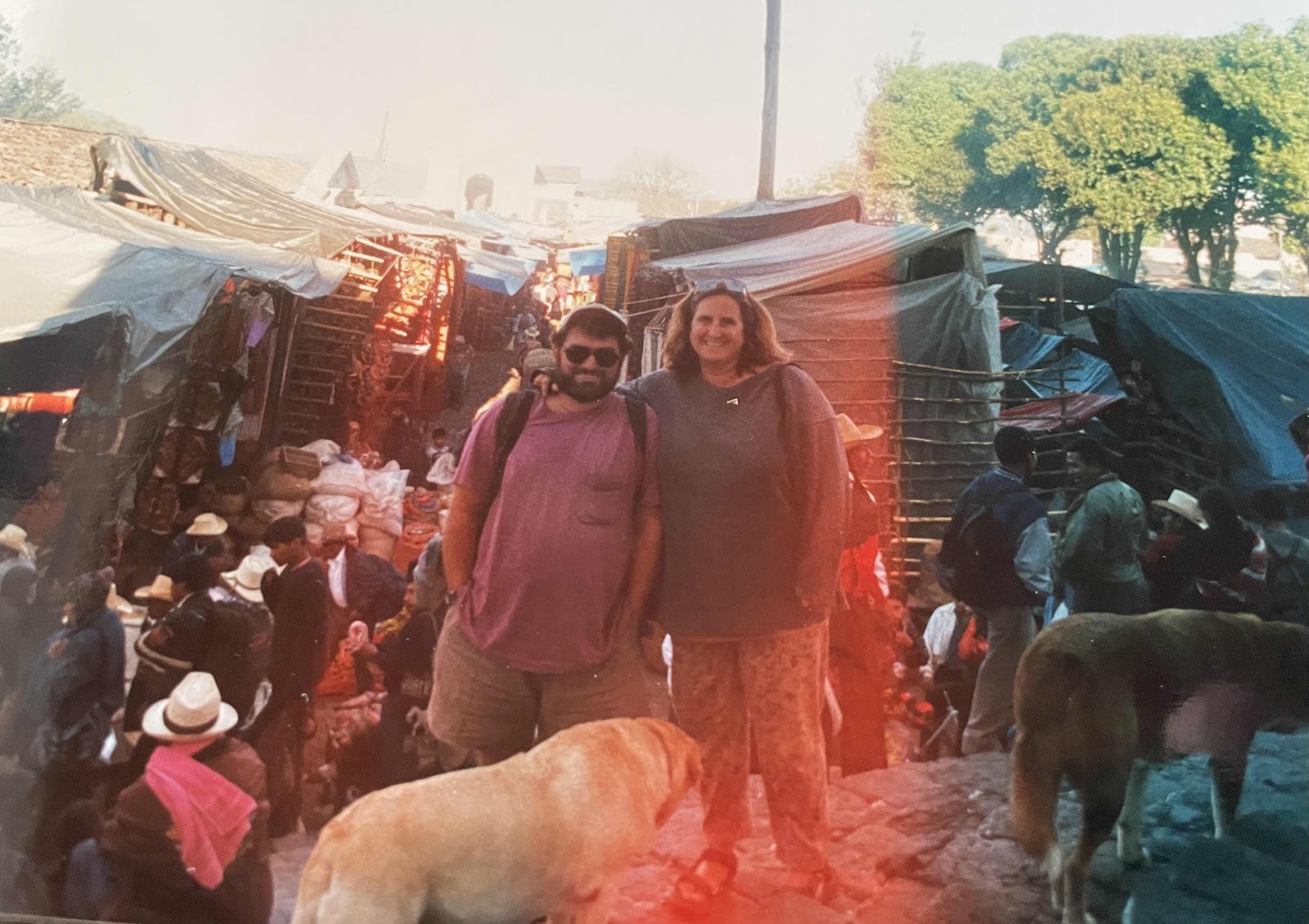 You will hear a lot of nonsense spoken about travel in Latin America, about violence and robberies and so forth but we never worried. People were cheerful and kind and I don't suppose it hurt to have an 80 pound Labrador and a 60 pound Husky type dog in tow. 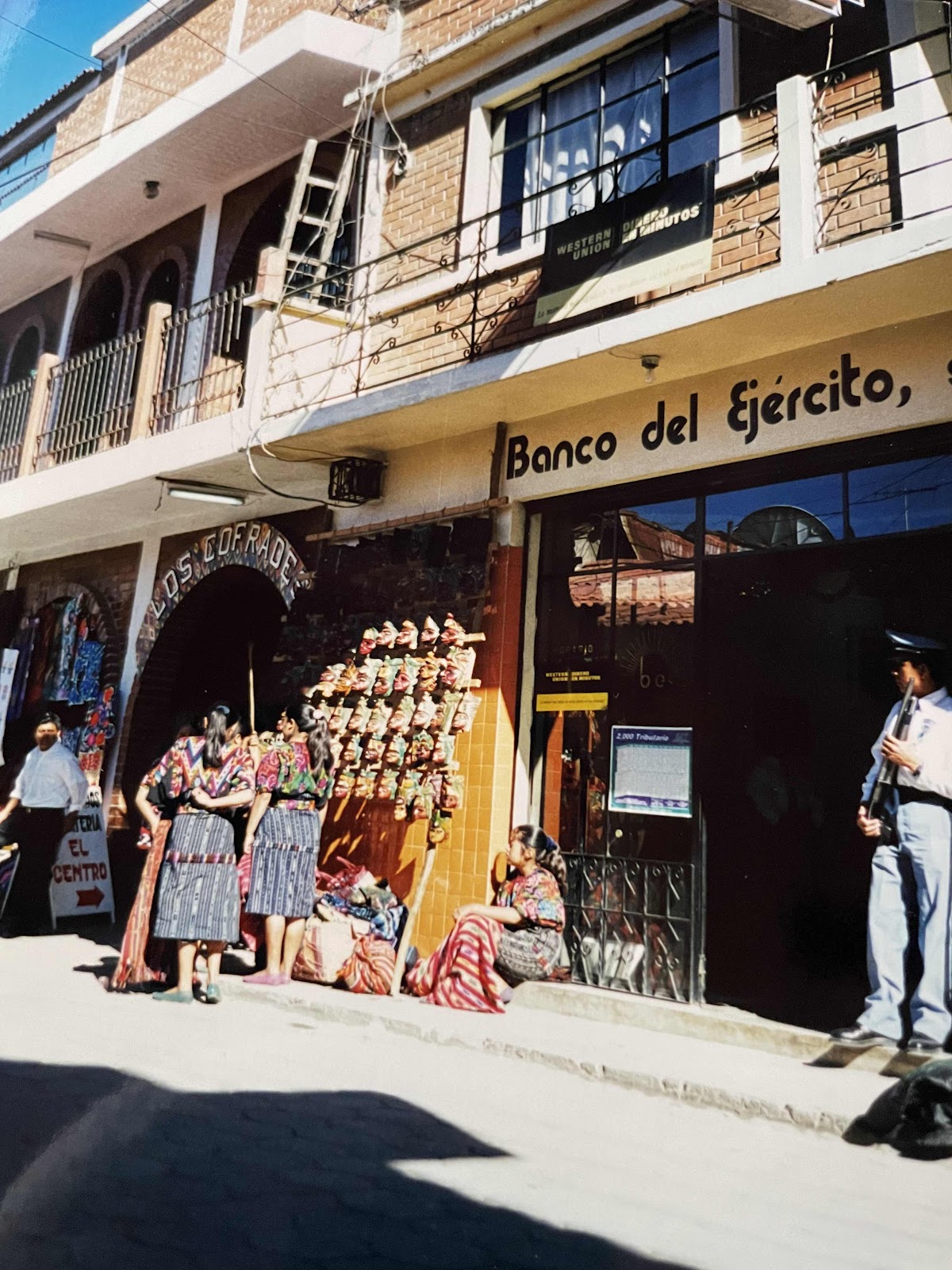 Here is a Quechua with a modest load walking his prize home- a pig. 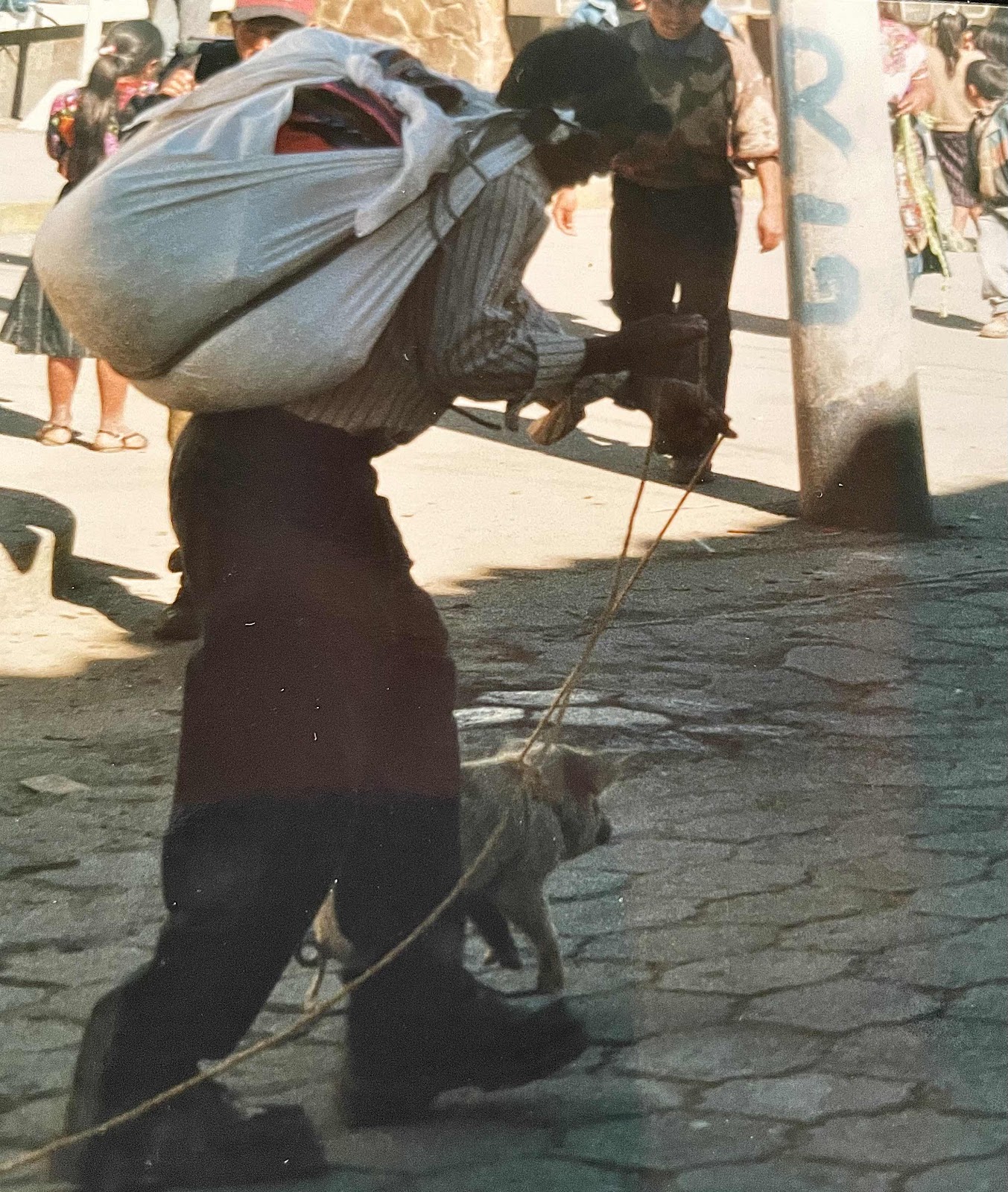 Many years have passed since we drove here and progress comes to all parts of the world, with cell phones and Internet and improved communications by road and rail but the fundamentals stay the same. Get up, go to work, look after your family and avoid drama. Americans who fear these places have a tendency to forget the basics are carried out the world over. 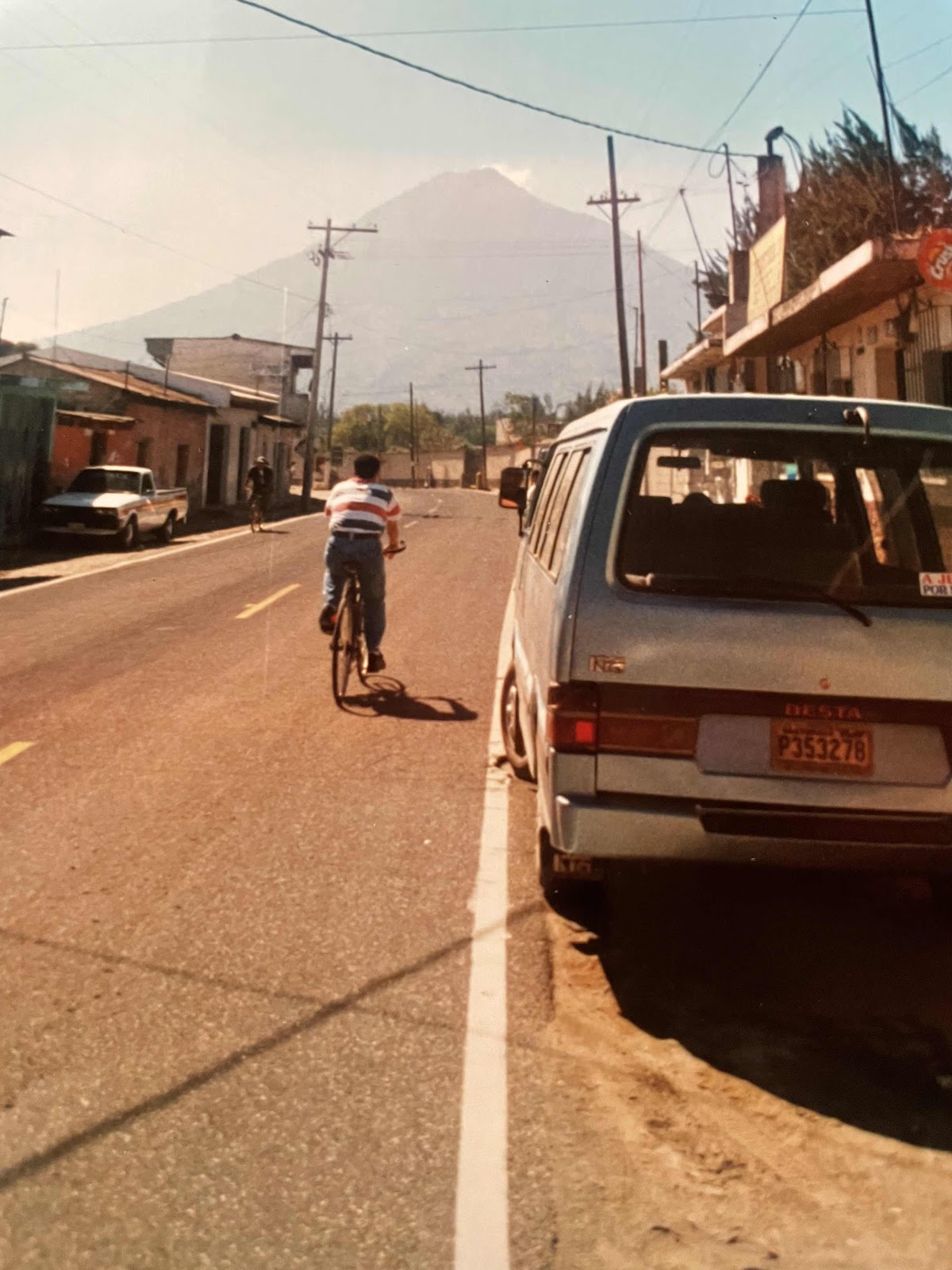 This was January and you can see the views were lovely even poorly reproduced by a dying film camera. Just looking at these pictures makes me want to go back...We stopped in one mountain village at a small restaurant where we hoped the owner spoke Spanish and he did. We sat down with the dogs laying in the sun outside, always keeping an eye on us and our well being. 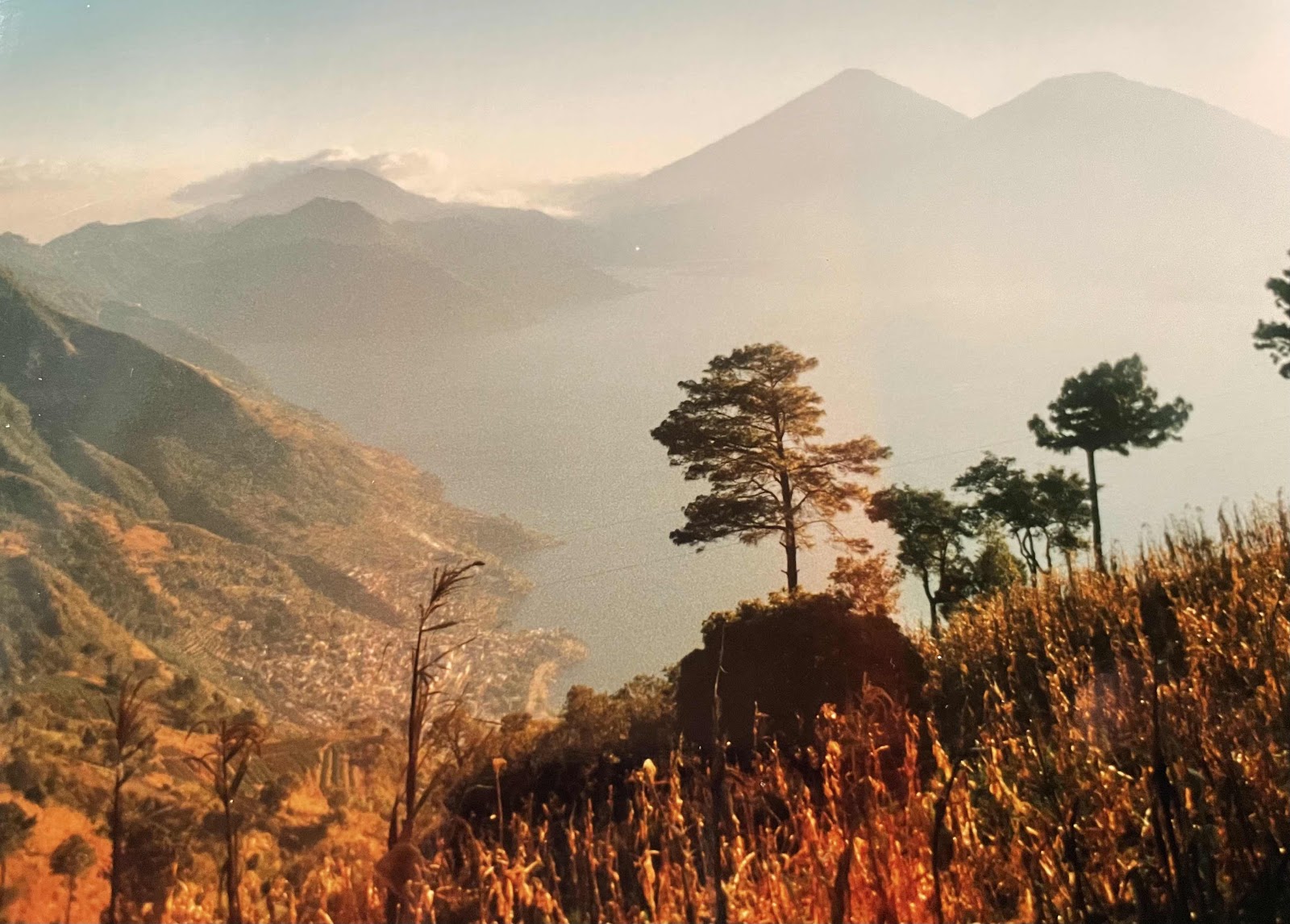 It soon became apparent to us that the chef/waiter/owner of this small establishment was queer as a coot, absolutely flaming. And remember this was 2020 when being gay was no public thing even in the US. He had talent that man and cooked us meat and rice and spiced the vegetables and served course after course, cheese and fruit and absolutely delicious all of it. We staggered from the table stuffed to the gills, one of the most memorable meals of our trip.  It was delightful, accompanied by his happy patter and cheery questions. I guess his village had accepted him because he made no attempt to play it straight and I wondered and still wonder how his life played out in that remote village along the highway. I like to think cooking fulfilled him as plainly he was happy making others happy. 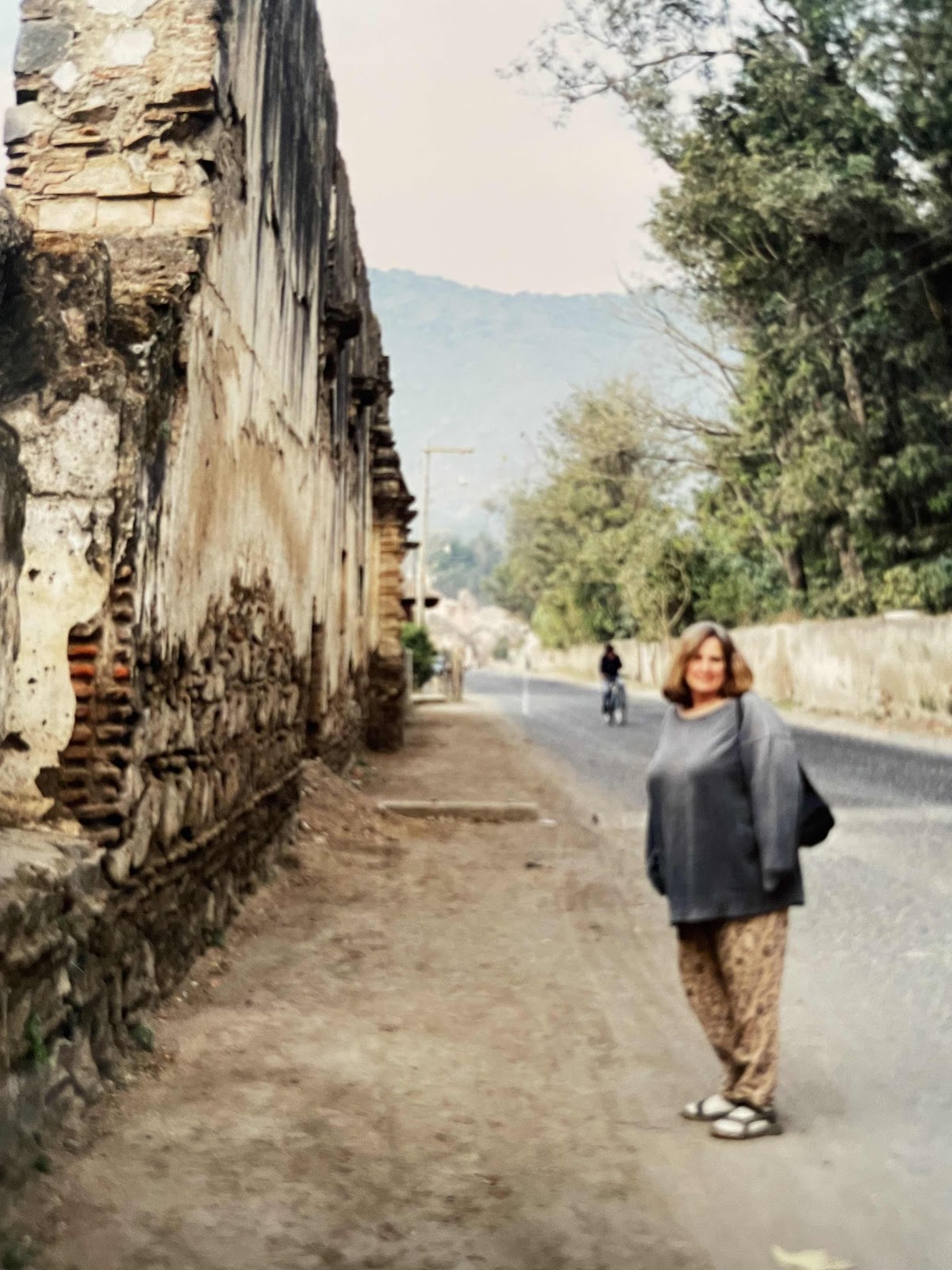 We stopped by the Taj Mahal of tourist sites in Guatemala, the old capital city ravaged by time and earthquakes. La Antigua Guatemala was founded in the 16th century as third capital of the Spanish province in Central America and is today a UNESCO world heritage site. We found this old nunnery knocked down by a quake a few short months after they spent ten years building it - I kid you not - in 1700 and something. 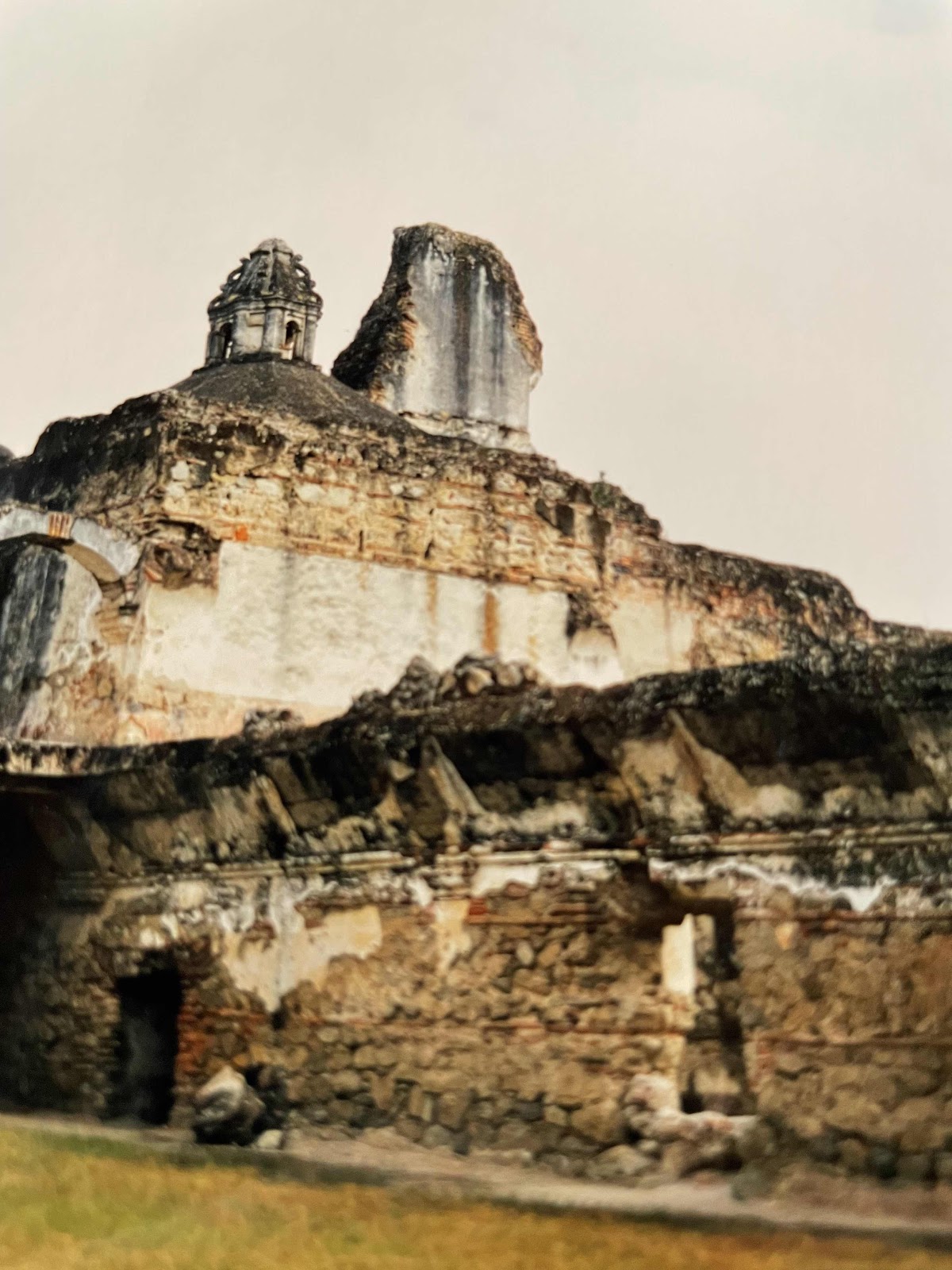 We did museums and restaurants and walked around. 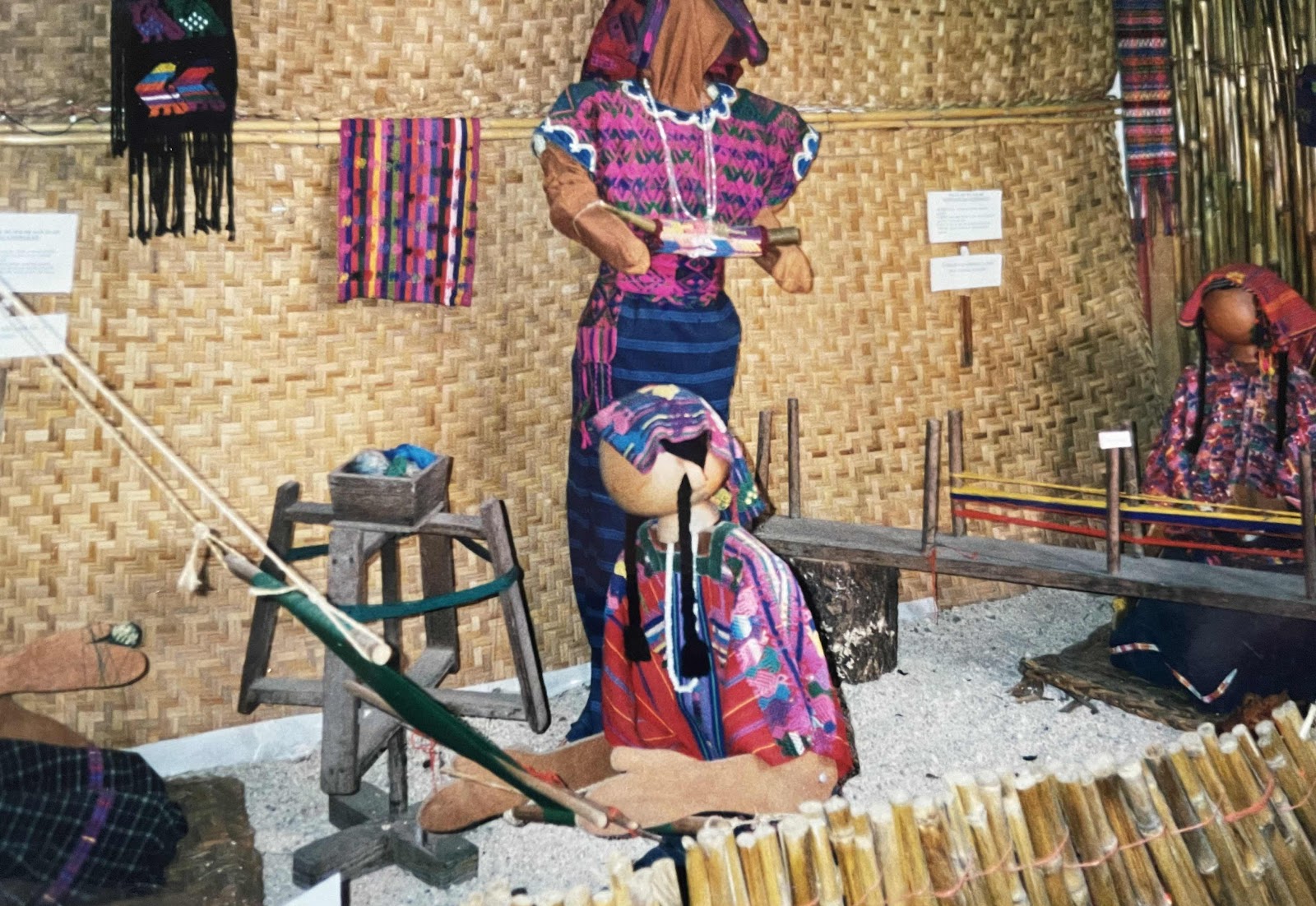 Our dogs lived the life of first world dogs everywhere we went.  They loved the life of travel oddly enough and were entirely happy exploring the world with us. Hopefully Rusty will do the same. 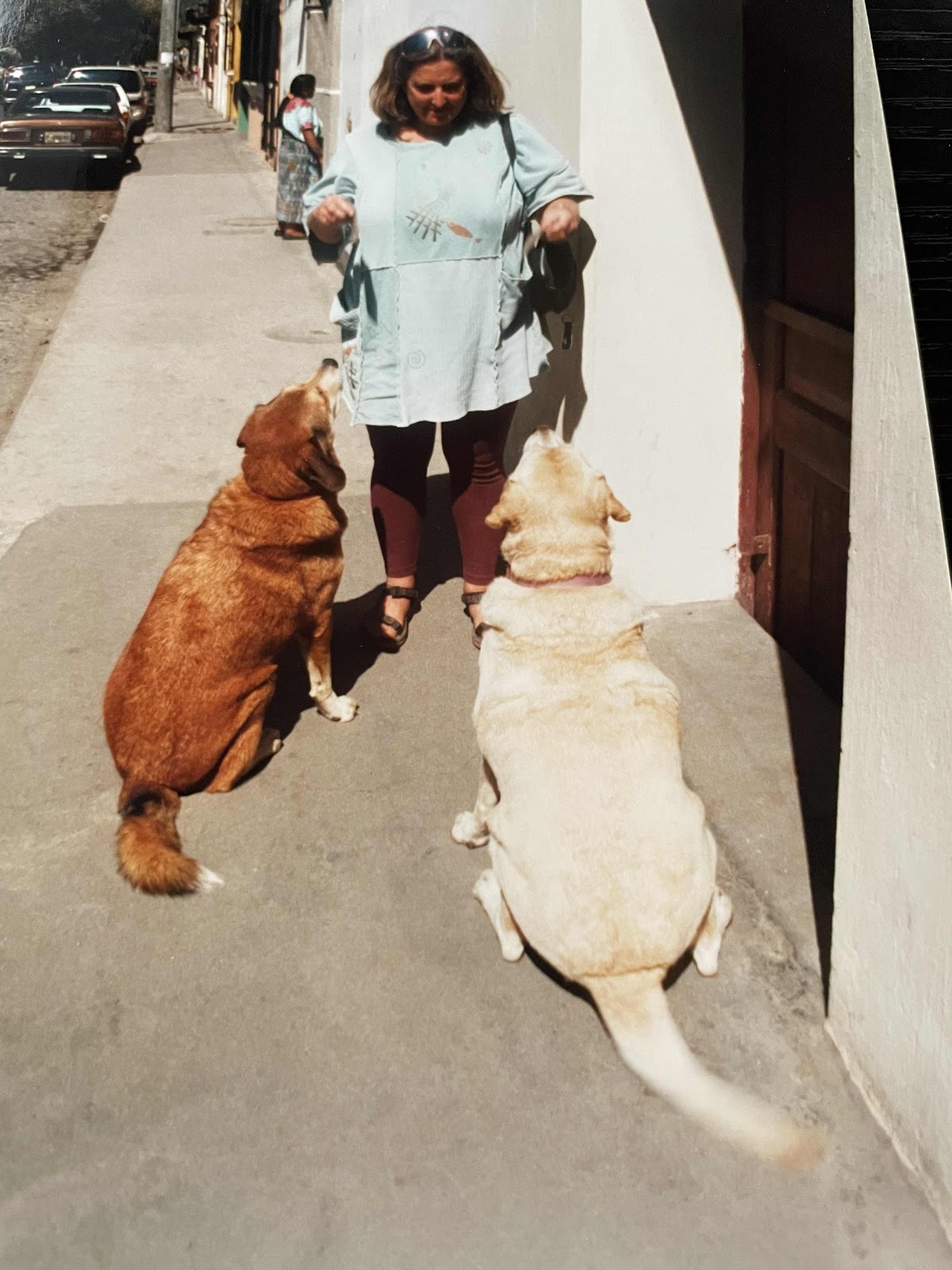 Naturally we managed to fail to take a proper picture of the archway that shows up in every tourist guide of this most famous Guatemalan city, though I have to say my persistence with a camera photographing as we went surprises me even today. I was into street photography before it became a 21st century fad. Clever me! 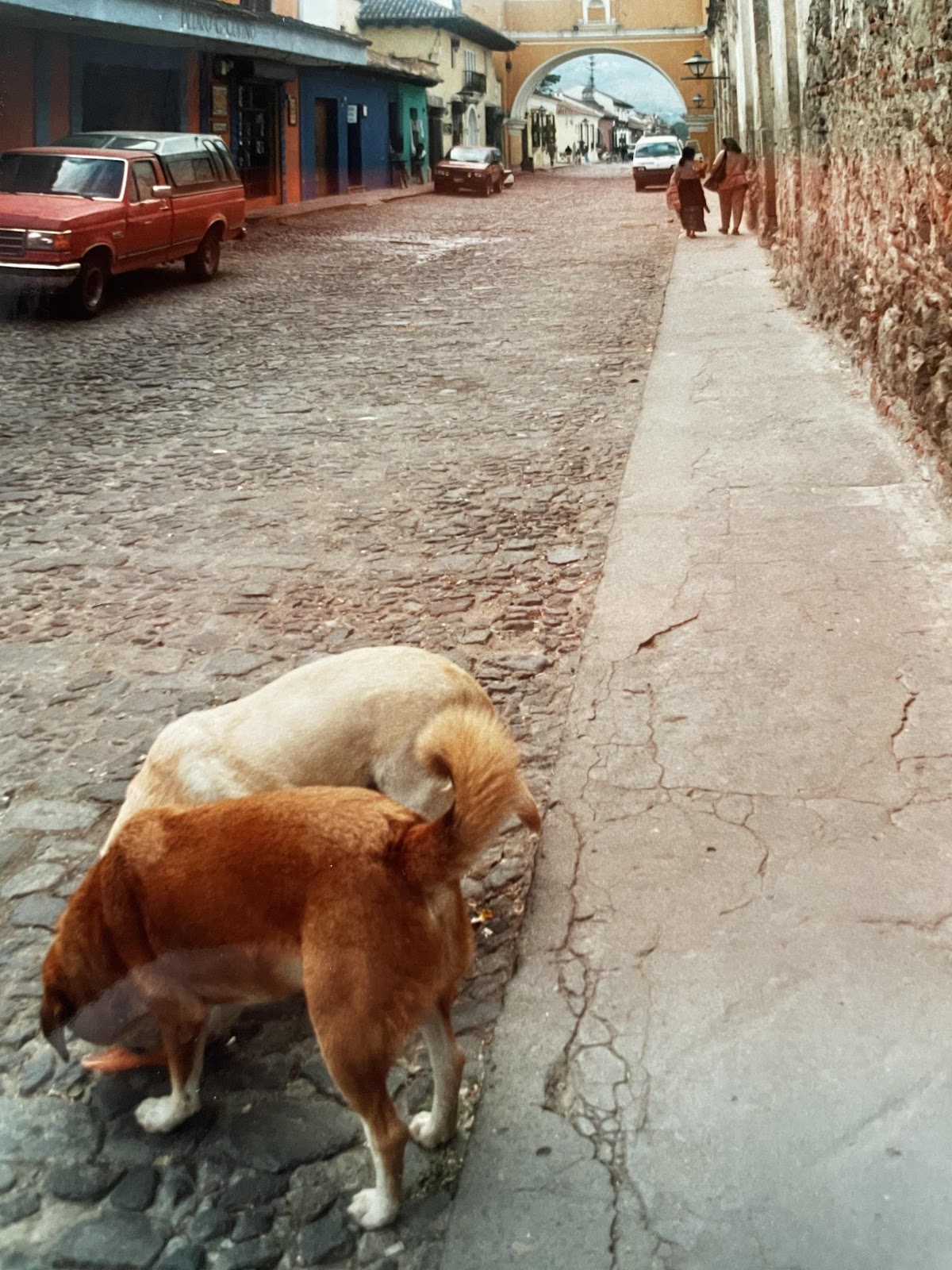 Layne took a picture of me in front of the tomb of an important historical figure  of Guatemala and this Spanish speaking couple were doing the same thing. Actual local tourists. They didn't rob me so we chatted and went our separate ways. People are just living their lives everywhere you go. I just went with a massive Eeyore Labrador in tow... 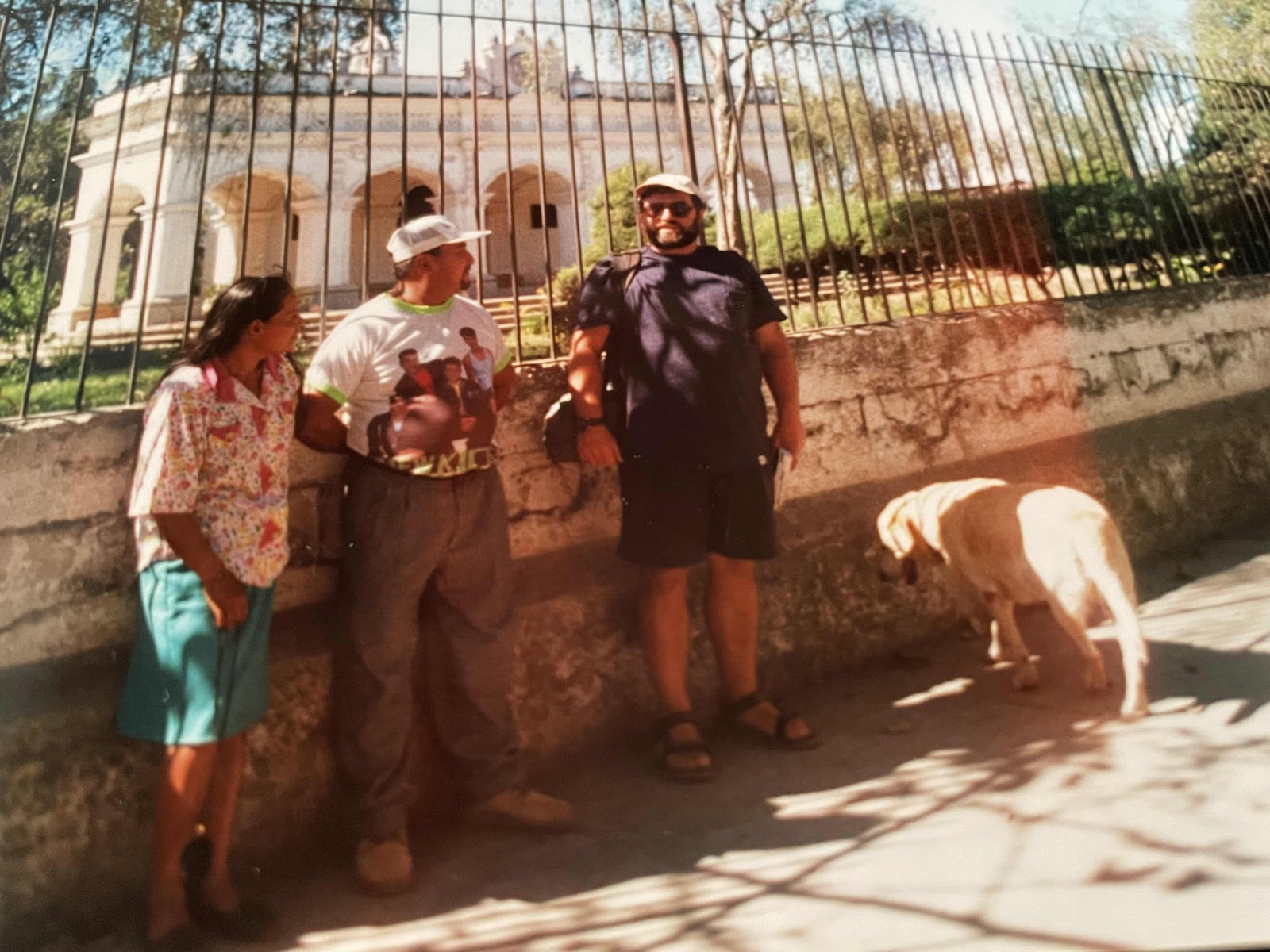 This ancient public laundry reminded me of the public fountains I grew up around in rural Italy in the 1960s. It is quite surprising how colonization transports cultures all over the place. 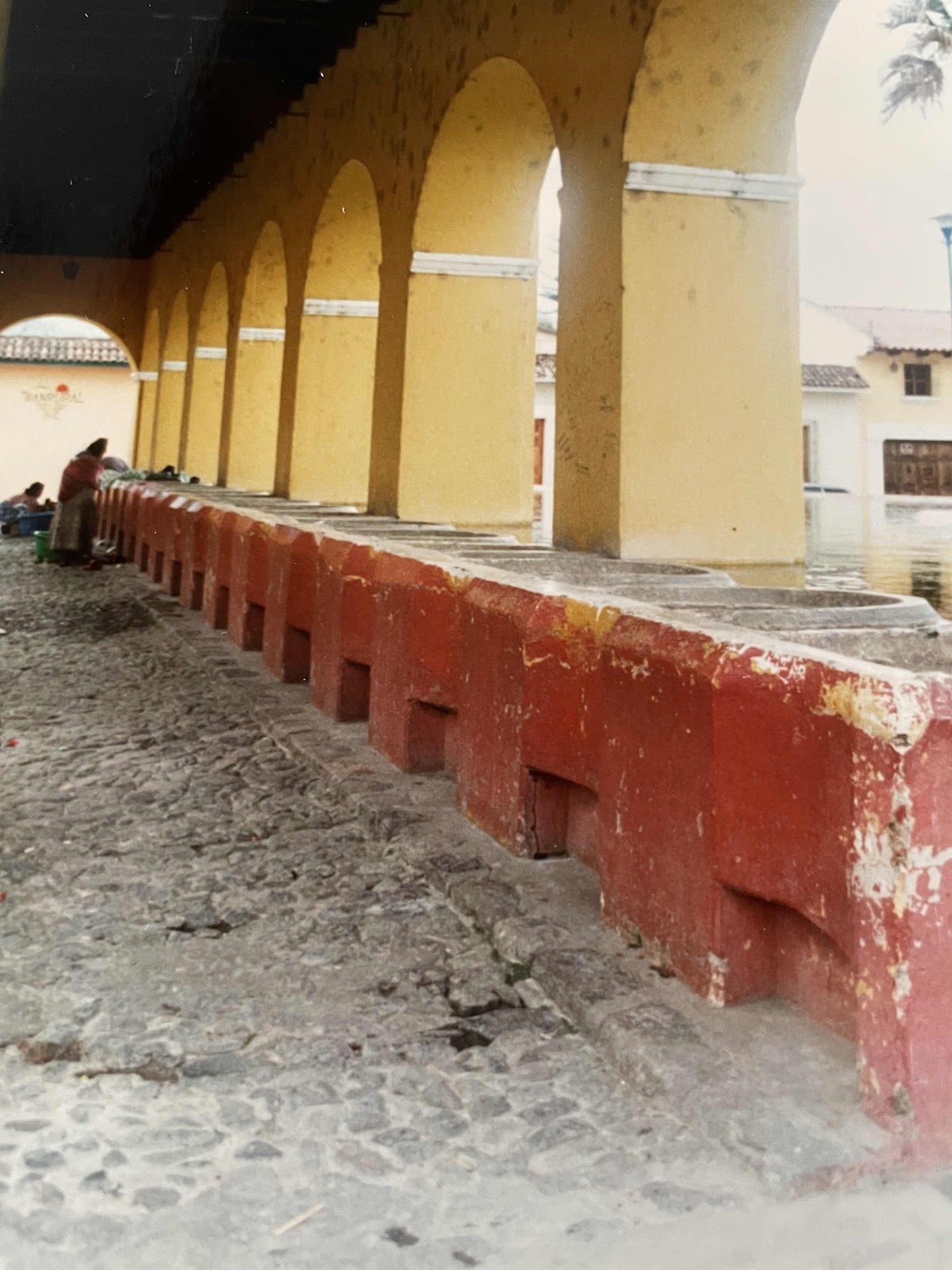 The freedom of Central America was refreshing, a place of color and confusion where everything seemed allowed or possible. Need a ride? Jump in to a pick up turned taxi. 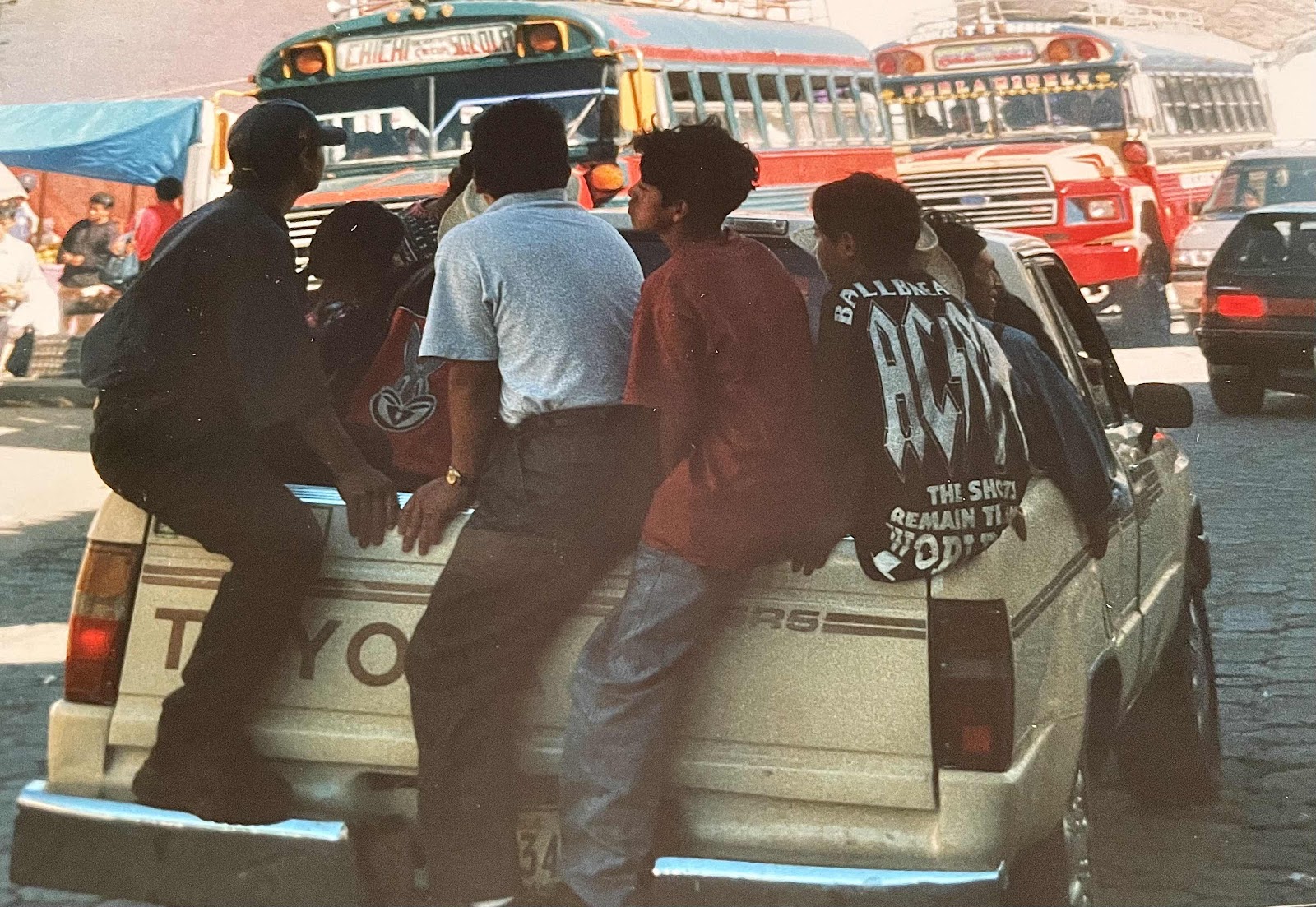 And soon enough we were back on the river among American and Canadian sailors in the familiar world of traveling by boat. 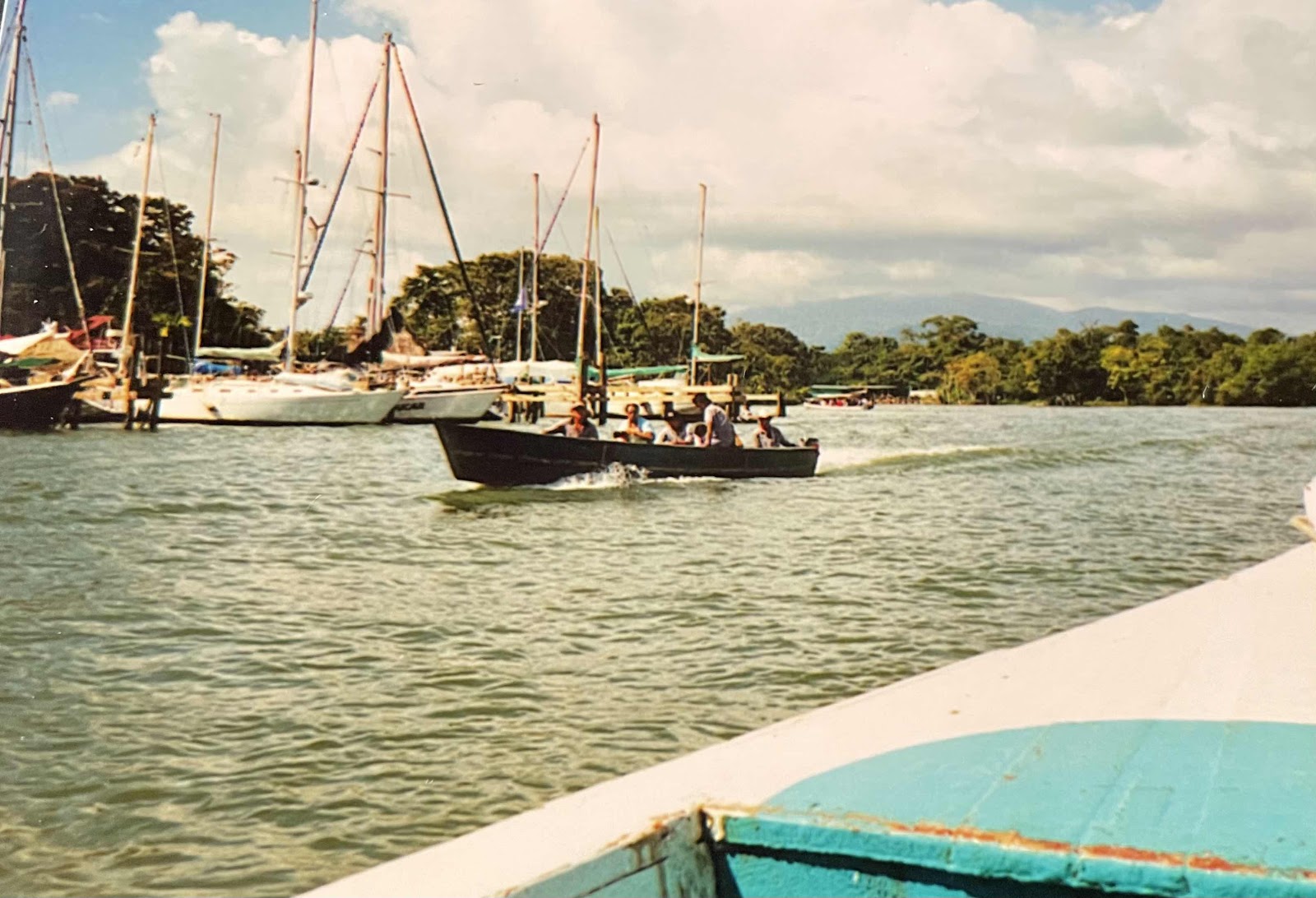 After we motored down the river, checked out of Livingston at the mouth of the Rio Dulce we sailed 16 miles across the bay to Belize and checked in to Punta Gorda. The Belize customs were dreary and detailed and required long lists of crap no one was interested in and most of which we had to guess. How many tins of jam did we carry? On and on we hand wrote reams of paper missing the simplicity of the breezy in-and-out of the Latin American countries surrounding the former British Honduras whose flag we flew from the right hand side of our mast. We were in English speaking Central America now. 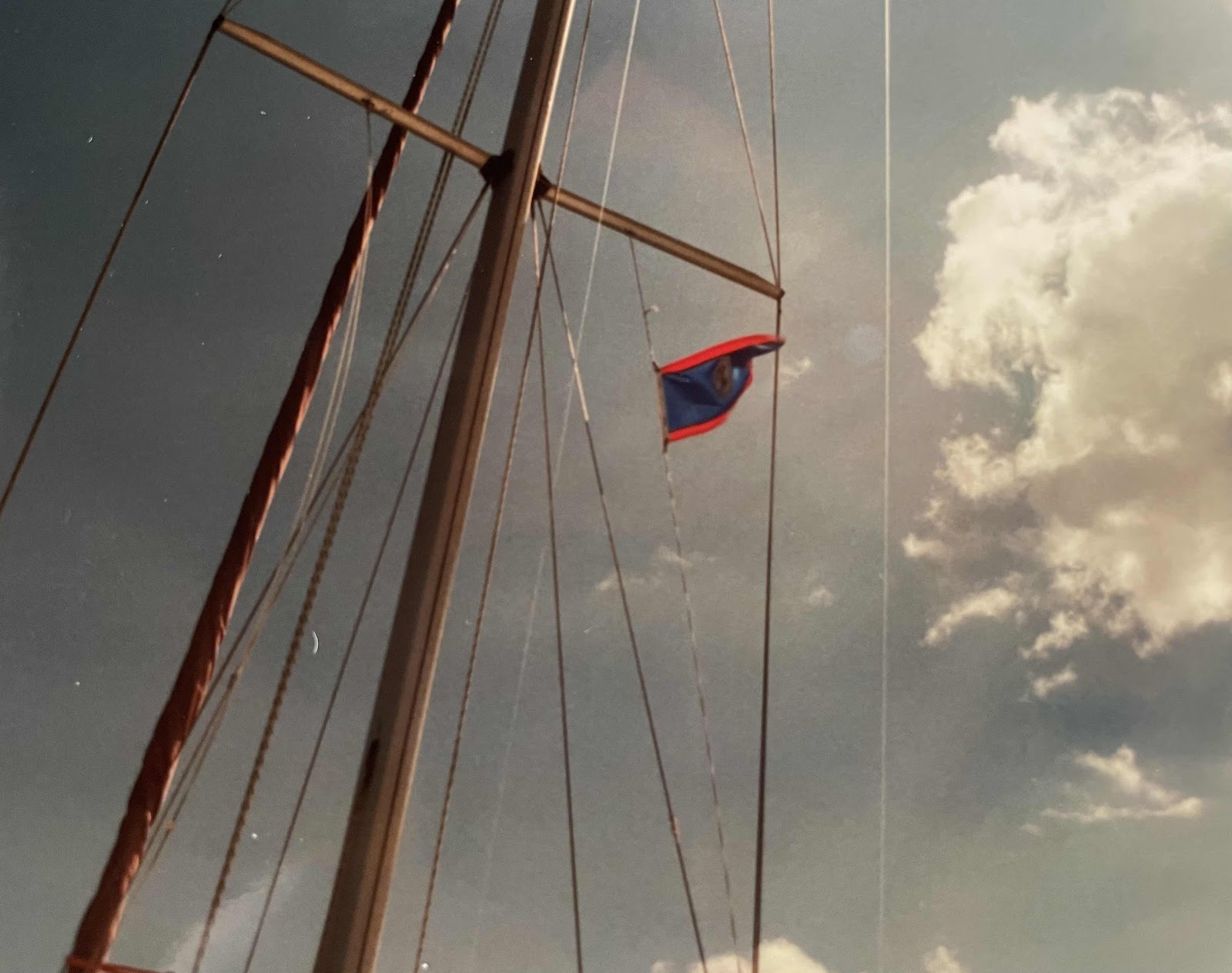 Our goal was Key West and we wanted to get there before the money ran out  while at the same time seeing what there was to see on the way. Punta Gorda from the approaches: 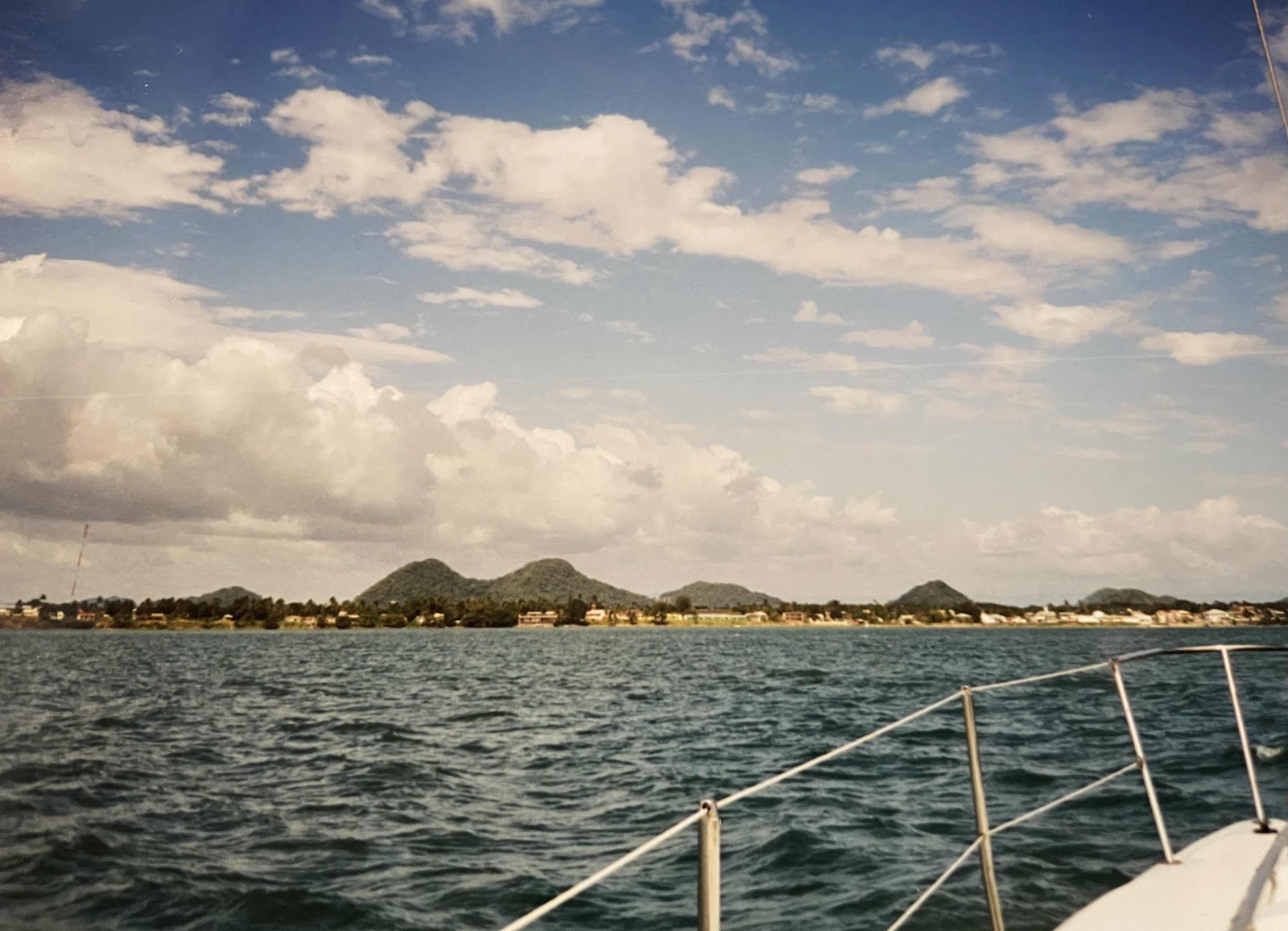