I have made the point before, about how signs crop up everywhere in this city. Key West is a remarkable town, built on beauty that grew out of found wood, ship's timbers pressed into service to build homes on land. Streets and alleys that grew up organically, spreading out from the waterfront as the population grew, yet remaining stable for most of the city's existence around 12,000 inhabitants from its founding when it grew rapidly, until New Town was built after World War Two. 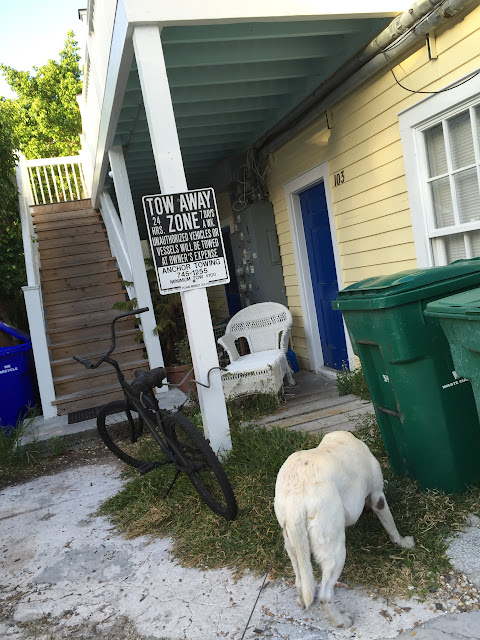 In the midst of all this profusion of solid wooden houses, narrow lanes and tropical plants growing everywhere human beings attach eyesores. I have no idea why cheap plastic signs telling strangers to keep out seem necessary when there are gates and fences everywhere. Tow away zone? Its a driveway, or course you get towed if you park in a stranger's weedy overgrown driveway. Happily Key West also encourages whimsy, a flying fish: 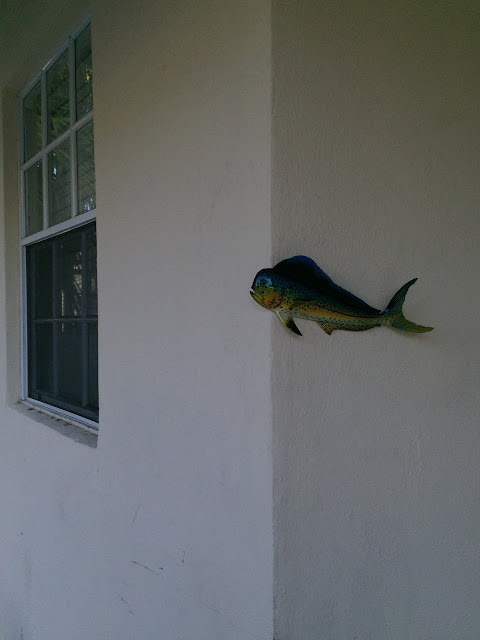 And a surfer threat to wipe you out...if you block the space. Surfing is a difficult sport to enjoy on an island surrounded by reefs that create shallow waters and not much in the way of waves. 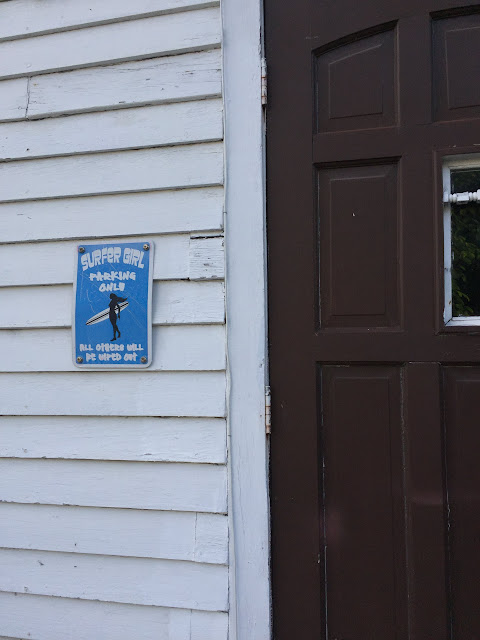 Cheyenne can be seriously annoying sometimes, like a donkey she stops where she feels like and noses around. If its in the middle of the street, too bad. Its like being leashed to Eeyore. Mm, something delicious got squashed here. 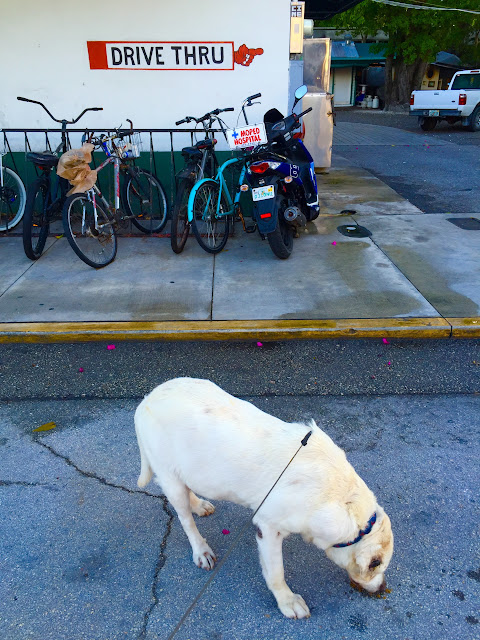 I like the brightly colored bicycles one finds along the street. Cheyenne likes to look for stuff. 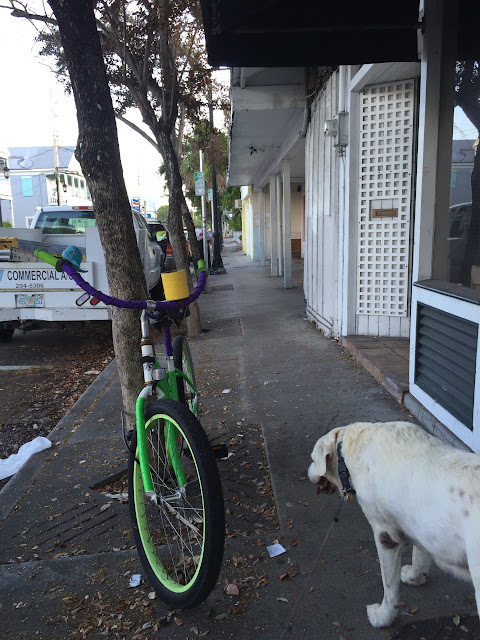 A woman passing on the sidewalk remarked how we were suited to each other, ambling along at the same pace. I wanted to tell her how Cheyenne was dumped for being too old and too slow and how lucky I am she likes strolling with me. Cheyenne pauses while I aim the camera and she never gets annoyed at me for holding her up. The only ting she doesn't like is if I stop to speak to someone. Then she gets impatient and barks. Gotta go... 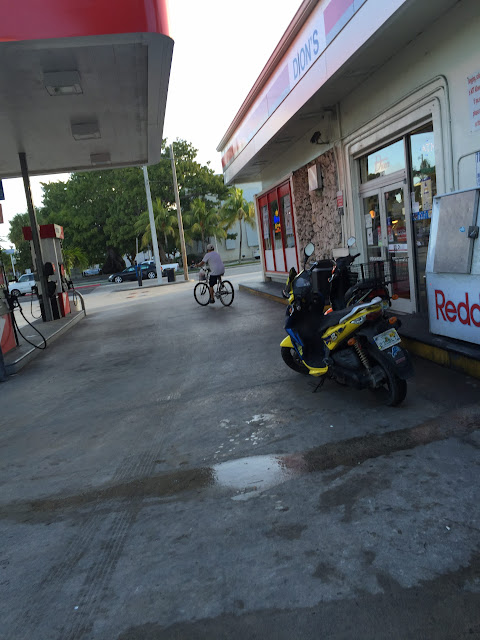 Hurricane season ends on the last day of November, officially, but some people leave their hurricane gutters up year round. They aren't that hard to take down or put up especially on the ground floor. They come in pieces, you slide them into the top and pop the bottom over the bolts and screw them down. I don't like leaving them up as they bang and clank in the least wind and it is totally weird looking at them from the inside. It's like being trapped inside a corrugated box. 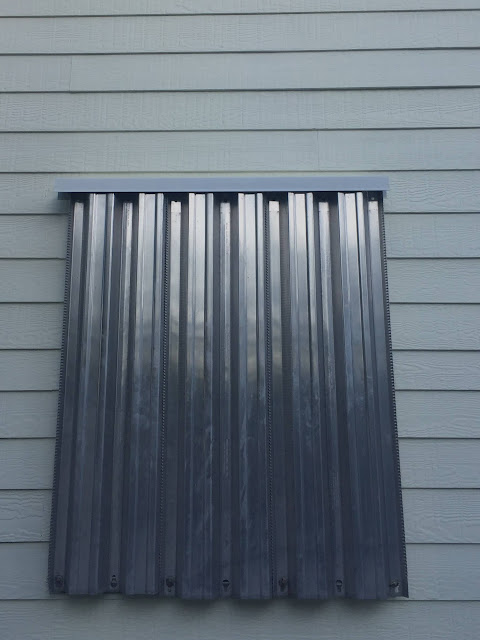 Besides, if the owners are home and not shoveling snow Up North they are missing out on the world outside: 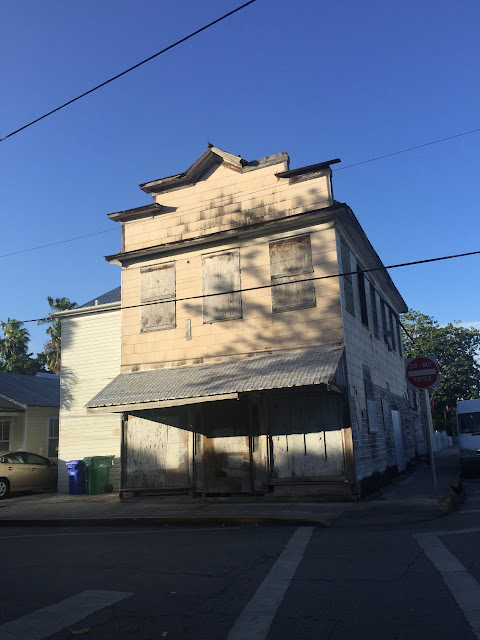