An afternoon swim at the key West Harbour Yacht Club and I took a few minutes to take some pictures of the boats in the channel between Boca Chica and Stock Island, where I was standing. 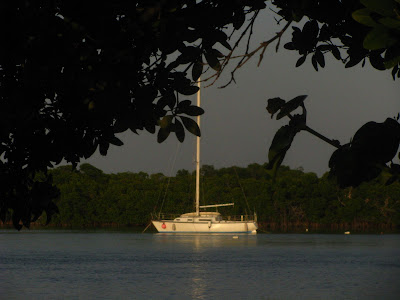 I learned to sail on the fractious and complex waters of Coastal California on Monterey Bay, a place of strong winds, extremely deep waters and very large swells and waves. Every time I left the Santa Cruz Harbor on my sailboat it was to head out into the face of large swells and northeast winds sweeping down the coast at twenty miles an hour or more. 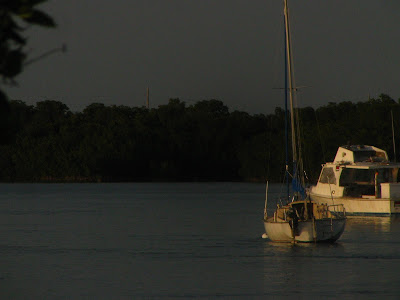 I always craved warm waters, never finding much pleasure in sailing in 55 degree salt water that had made it's way south from Alaska. Anchoring in a relatively quite cove did not mean one could go swimming unless one was a polar bear. I had a girlfriend for whom swimming was an imperative and in the way that one does I learned to put a brave face on my dislike of freezing cold water, but when the relationship ended so did my swims off the boat. 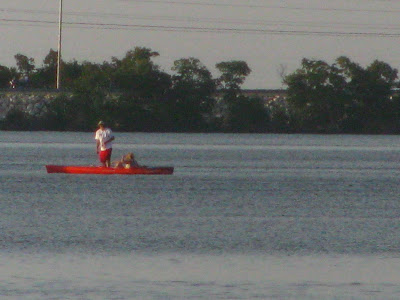 To live in a place where one can go boating in a t-shirt and not shiver, in waters so calm one can stand up in kayak and not lose one's life. That is bliss. 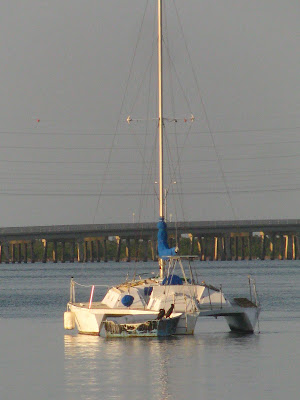 My boat has had it's Spring service and the evenings are longer before darkness falls. All of which means that it's swimming season in the Lower Keys. 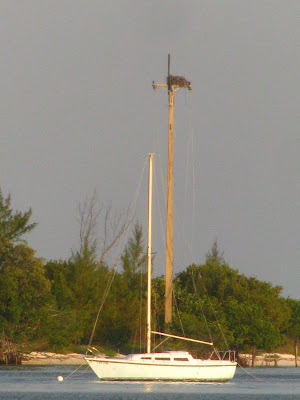 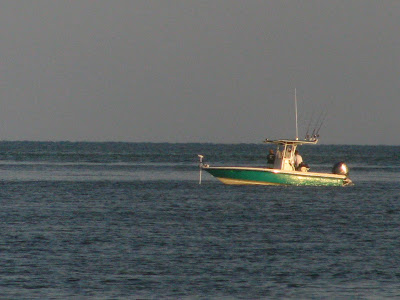 The boast was that you could circle the world in beer at the bar and restaurant at the waterfront at the Key West Bight. My wife and I went for dinner instead. 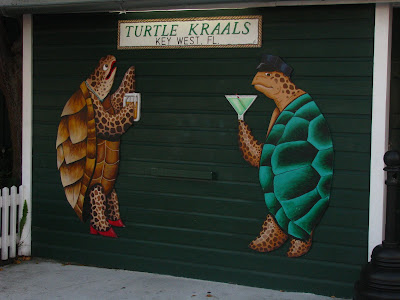 The name is derived from the American word "corral" and why it was corrupted into Afrikaans I have no idea. This place was in fact the center of turtle capture and canning for sale around the world and there is a museum on the docks, the old corrals in fact, that illustrates the history. 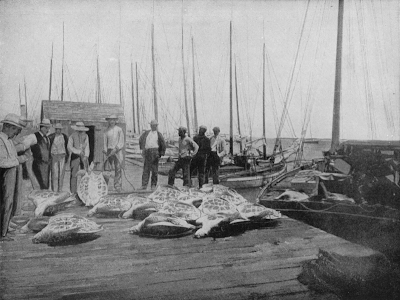 I find the pictures of turtles stored helpless on their backs awaiting the butcher's knife to be rather disturbing so I prefer not to delve too deeply into that side of things. 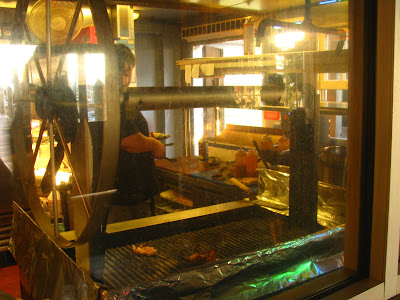 They have renovated the place and have added barbecue to their menu. Of course one doesn't spend a lot of time pondering the fate of the cows and pigs that gave their lives in slaughterhouses across the plains at the hands of underpaid illegal migrant workers hired by familiar names in food processing so we could eat $12 sandwiches at the Key West waterfront...Life is complicated. 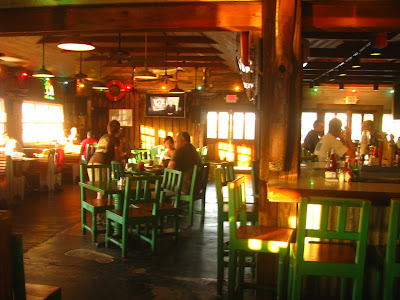 I was selected as civilian of the quarter a while back in the Police Department and part of the honor included a gift certificate by Rudy Molinet's sponsoring Real Estate company so we got our meal for free with that rather nice piece of paper. 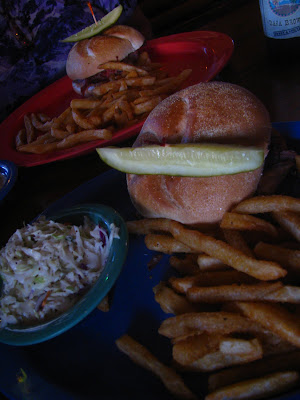 My wife likes to mix up her sauces and they have plenty to choose from. 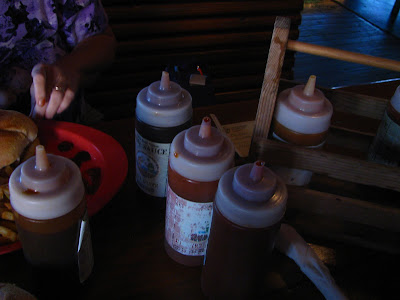 I suppose we should have had a drink in the tower bar and all that cool stuff upstairs, a trip we will save for next time, as we neither of us felt much like alcohol that night. No alcohol? Odd I know for Keys residents but there we are. Key West Diary; idiosyncrasy in action.
http://www.turtlekraals.com/index.html
Posted by Conchscooter at 5:01 PM 8 comments: Links to this post

With the departure of the winter hordes my wife and I decided to penetrate deep into Old Town for a little tourist strolling in Old Key West. We came out from our waterside dinner in time to see the sun setting over what is known as the Key West Bight. 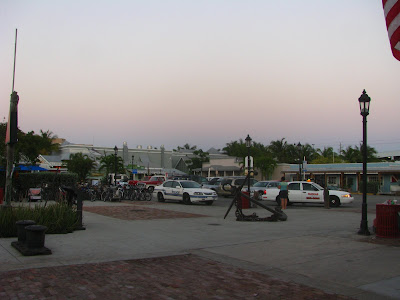 A "bight" in nautical terms means an indentation in the land, or a loop of rope depending on the context and the Key West Bight is very much focused on the water. This dude was putting on a show cutting up a fish. 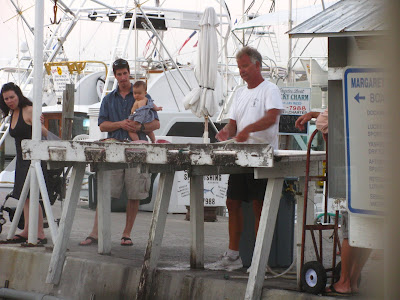 It was only on the eighth or ninth attempt to get him still enough to be in focus in the half light that I noticed the prosperous young woman in a bikini in the background. So I figured to include a second picture of the fish gutting to appease the perverts in the crowd. In this second shot she is about the only person in focus. 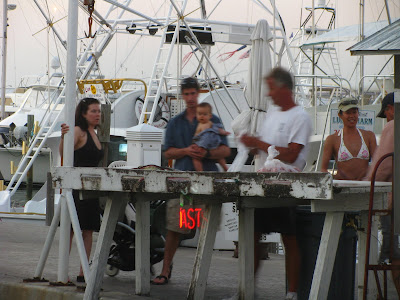 Have you noticed how much trash we generate? This stuff will all be bagged and hauled 200 miles to a mound of trash collected at the landfill near Pompano Beach. I can hardly bear to think what an incredible waste of energy it all is, especially considering we used to have a waste to electricity plant on Stock Island... 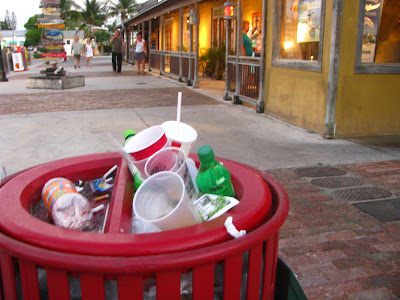 Tourists love their sign posts. Most of these places are unknown to me, and some I have heard of but never visited. I've traveled a lot, and it doesn't amount to that much when you view the shape of the world from your neighbor's perspective. 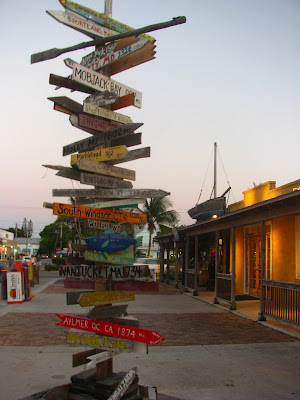 Boats dragged ashore and used as monuments give me pause. It is very unnatural to see this sort of thing, at least for me. The shop underneath, part of the Historic Tours Empire I believe, sells Chinese made stuff for the edification of visitors. 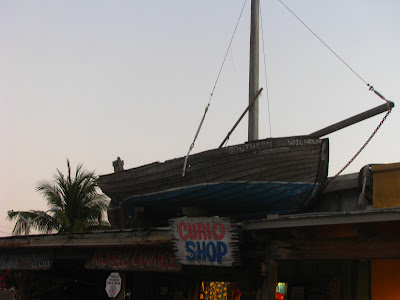 "The Woolworth of the South" says a sign above the store. 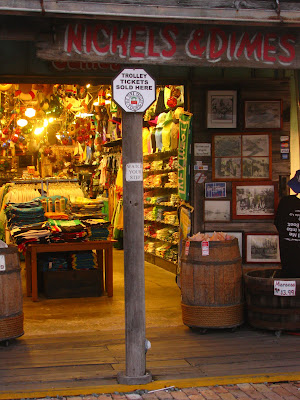 How odd it is to think that Key west's famed Tourist Economy depends on increasing sales of this stuff. Long may it last.
Posted by Conchscooter at 11:01 AM No comments: Links to this post