The Zen Of Motorcycling

I am quite fond of Motorcycle.com one of the first and in my opinion among the best of motorcycle magazines purely online. I've read it since it's inception and I even paid a subscription in its early years until that model of profit-making faded away. It seemed worth a few dollars to get access to their store of reviews and riding related stuff. From time to time they veer off into less factual writing, not often enough in my opinion, but when they do they sometimes write some really insightful pieces about riding. This essay struck a chord. Set in California where lane splitting is legal when done properly, the writer evoked very nicely the sensations and irritations of riding. 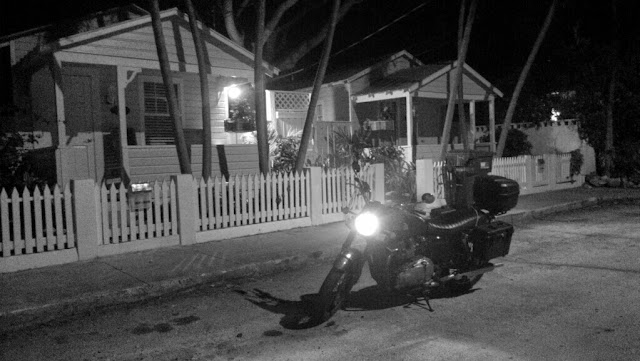 
I recently did something on a motorcycle that I hadn’t done in a preposterously long time. I rode with no intended purpose, traveling nowhere in particular.
A motojournalist’s brain is always working while riding: Is the XYZ750 better than the XYZ700 it replaces and the new Yamizuka 750? Is this helmet shape a medium-oval or a long-oval? Do my coworkers think I’m a dick? How many button pushes does it take to reset this farking tripmeter?!!!
I had almost forgotten how soothing it is just gliding through the air on a motorcycle, simply enjoying this elemental yet oddly profound feeling that got us all hooked on the moto experience in the first place. There are incredible feelings that only motorcyclists get as they pass through their environments with no roof or doors that mute sensory stimuli. Switching off my mind from wheelbases, MSRPs and market penetration returned my brain to a place it hadn’t been in months – maybe years.
Because I had no destination in mind, I wasn’t in a hurry, as is my typical situation. The air gliding past my body gave me a fairly precise idea of my speed, so I wasn’t bothering to check the speedo to see how many mph I was exceeding the limit, as is often the case. More than a few cars went past me, which almost always is not the case when I ride. I was just enjoying the ride at a comfortable pace.
My sensory perceptions seemed tuned higher than normal. As I cruised through the atmosphere, I could feel the air swirl around my body, almost to the point that I could imagine seeing it slide past me. Vibration I felt from the engine wasn’t judged by an analytical mind as good or bad, but rather as a basic connection to a machine that was living and breathing beneath me. Even my sense of smell heightened, my nose able to detect rich carburetion from the Corvette several cars ahead of me.
When I’m behind the bars of a motorcycle, calm and relaxed are feelings atypical for me, especially when in traffic. Yet there they were, beaming back at me in quiet pacification. It was like I was snuggled up to something warm and cozy, dropping my blood pressure as if a bottle of lisinopril was fused with an orgasm’s afterglow.
I was luxuriating in the calm feeling for several miles, wondering why more of my rides couldn’t be like this. Then the driver of the car in front of me needlessly applied her brakes as we approached a green light, spurring me to evade the makeup-checking zombie. My brain reverted back to its default mode and made me speed up to the upper percentile of traffic speed. I began to slide my way into holes in traffic, actively searching for the most efficient route ahead. No longer was I savoring a peaceful easy feeling. My mind was calm and serene minutes prior, but my brain was now simultaneously processing dozens of inputs – clutch bite, shift points, car drivers, upcoming signal lights, mirrors – while trying to stay ahead of traffic.

It was disappointing to realize my mindset had all-too-swiftly drifted from its peaceful lull into its frenetic alter ego. Perhaps it would be impossible for me to feel relaxed while riding a motorcycle. However, I was able to make another mental shift and return to deeper breathing and less stress, which made me feel a bit chuffed to be able to modify my way of thinking so consciously. Master of my own domain, so to speak.
Not long after, some yob in his Audi A4 ran through the tail end of a yellow light and into the pathway of my green light. In my seemingly enlightened state, I quickly granted forgiveness and remained calm. Then, as I rolled up alongside, he began drifting into my lane. I glanced over and noticed the stupid eyes in his stupid head were looking down at his stupid phone – perhaps the most dangerous development of the 21st century – and the red mist dripped over my stupid eyes.
No longer calm, and no longer enlightened, I reverted back to my default programming, getting on the gas and keeping ahead of as much traffic as possible. Gaps in traffic that minutes earlier seemed small were now open gates with invitations. Car velocities that previously seemed fast became minimum speeds. I was filtering through stopped traffic, then jamming on the throttle as I bolted away off the line. If there was a traffic contest, I was definitely winning!
I was doing so well, in fact, that I drew the attention of a fellow rider who was trying to keep up with me as I scythed through traffic. His bike wasn’t as narrow as the Ducati Monster I was riding, but the Honda ST1300 he was riding had a magical way of parting traffic. Mostly because of the red and blue lights flashing as he closed the gap to me.
After having a discussion about the best ways for a motorcycle to ride within traffic, I was issued a citation for traveling 60 mph in a 45-mph zone. The motor officer was actually quite pleasant, all things considered, and he left me with advice to ride a little more conservatively.
I’m trying, dude!
Repetition is the mother of learning, the father of action, which makes it the architect of accomplishment.
—Zig Ziglar