This week was to have been a trip to England (with Josh and Lisa who are there now) or Panama with Wayne and Chuck (who are at home on Summerland Key now) but who would have taken Cheyenne? In the end my wife's Spring Break coincided with my long weekend and herself decided a road trip was in order. We left Saturday about lunch time and passed the Lower Keys toll booth in action at the southern end of the Bahia Honda Bridge. 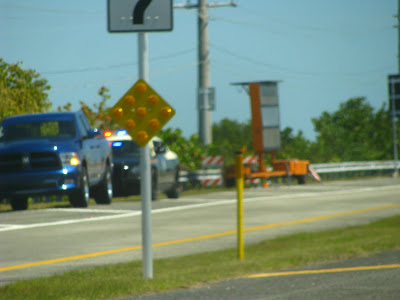 The FHP loves to sit in the median and pick off unsuspecting speeders coming off the four lane bridge heading towards Key West. Wen locals slow visitors blow and get a fat ticket. Marathon was having a seafood festival which barely slowed us at all, despite the crowds of adult kids crossing the street in neat lines. 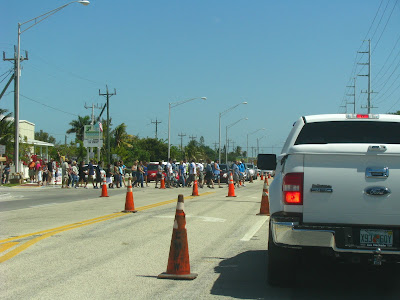 We nearly got screwed around Mile Marker 102 in Key largo when St Patrick got the highway closed, so we dived into the side streets and joined the back of the parade... 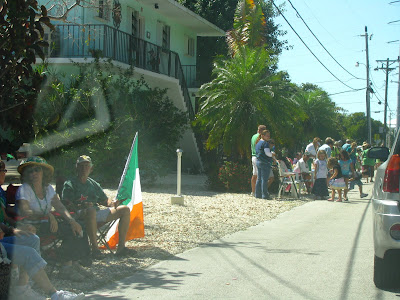 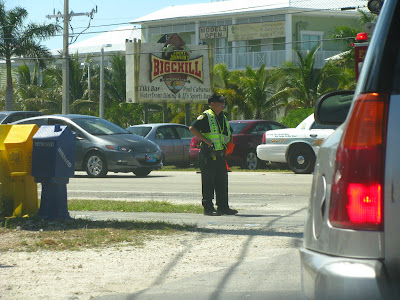 ...except those turning a sharp right back onto the Overseas Highway, with no other traffic to share the northbound lanes on the 18 Mile Stretch: 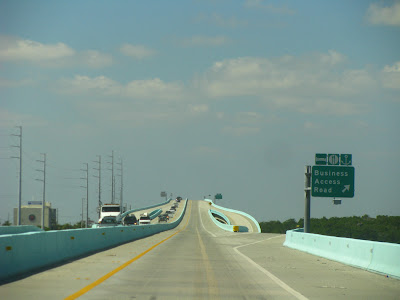 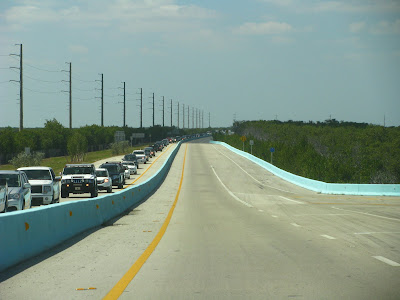 It must have been Hell for the crowds heading to the Keys for the break. For us it was the fastest transit of the Stretch ever. 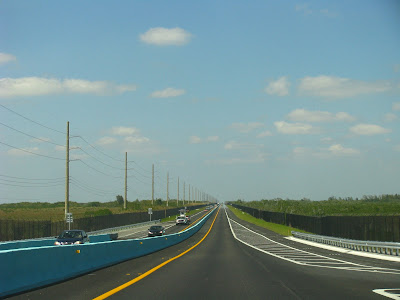 Homestead was crowded with traffic and we stopped for lunch at our favorite Mexican hole in the wall. 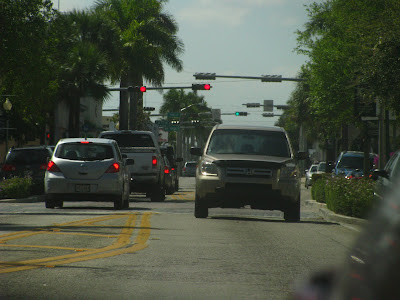 Los Nopalitos on East Mowry off Krome Avenue is now El Rinconcito ("The Little Corner" and much spiffed up, with fresh paint and modern toilets and a crisp fresh menu. 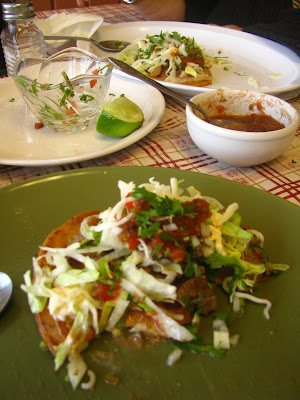 We tested the tacos and tostadas and a burrito and it was all excellent. 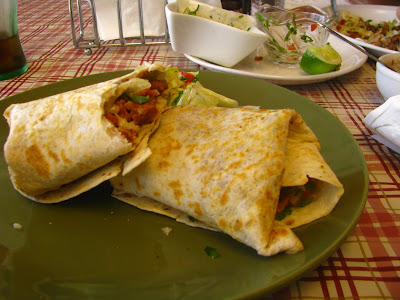 The old owner had a series of steaming vats with hot food ready to be poured over rice but this place has crisp fresh ingredients and the wait was just a bit longer, and worth it. We got change from a $20 for all the food. 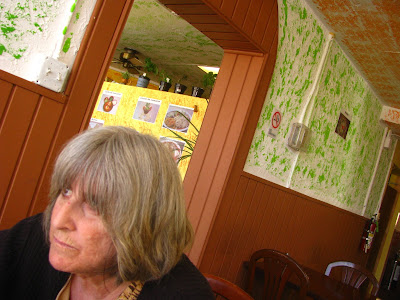 From Homestead we took off up Krome Avenue, trapped in lines of cars which forced Yours Truly to drop the high speed posture and reckon gently with the big farm pickups and the little compacts bulging with farm workers dawdling at ten under or below the speed limit. I toyed with the camera for a while. 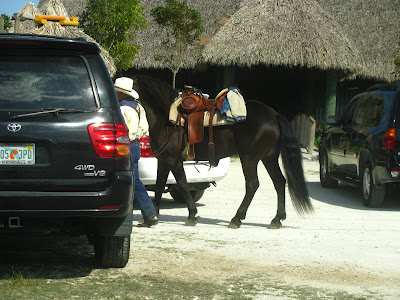 Krome Avenue is a thoroughfare supposed to be widened to four lanes , but despite the slow traffic and abundance of slow traffic lights I like it just the way it is. 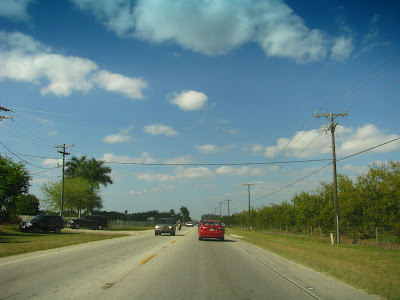 There are fields with agricultural crops, rows of palm tree plantations for construction that has all but dried up and tons of nurseries and businesses selling ornaments for gardens, most of it in Spanish. 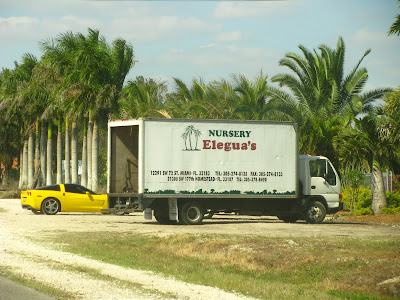 It is a weird mixture of the mundane and agricultural and the whimsical and picturesque. 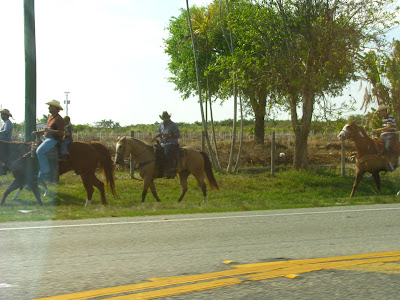 My fantasy is to buy a huge plot of land, build a wall around it and landscape a huge refuge for all the dogs the pound doesn't think will find homes. I figure I could live quite securely compound patrolled by a dozen grateful ex-strays. And I wouldn't need to be nice to my neighbors. 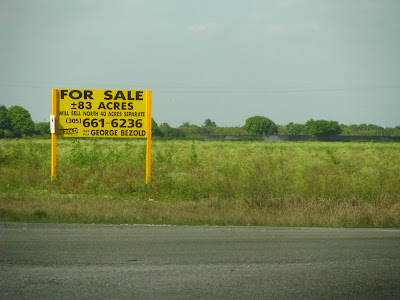 Tamiami Trail, the original road from Tampa to Miami was lovely as ever Saturday afternoon, sunshine and motorcycles and me not the least envious, loaded as my car was with my family. 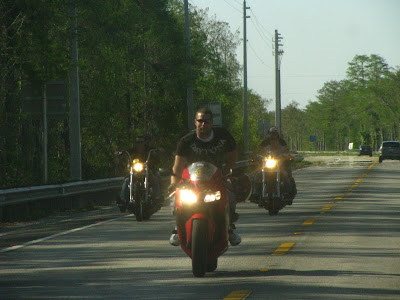 The weekends are a good time to drive out from the city, park at the edge of the highway and fish. That's a great program for a lot of people apparently. 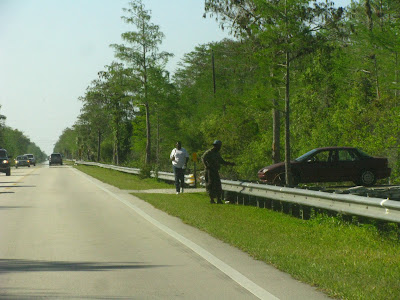 The Miccosukee Tribal Police patrol the highway which has a 55 mph limit in Dade County and 60 miles per hour in Collier County and cuts across the Indian Reservation for much of it's 90 mile length. Beware the brown and white police cars... 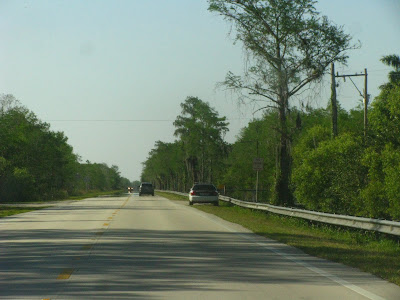 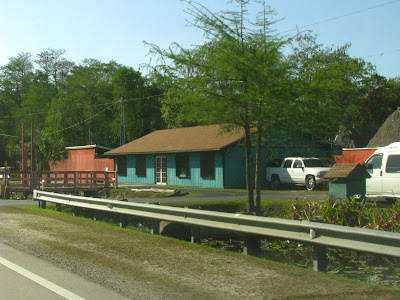 The Everglades are long and flat and green down here. 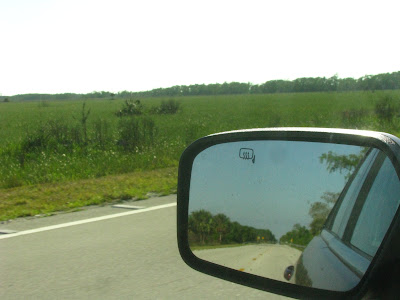 Eventually we arrived in the community of Estero, a nondescript bunch of shops between Naples to the south and Fort Myers (not Meyers, please note!) to the north. My wife's 3G iPhone had crapped out and she wanted a new one. I dropped off the wife and phone in the faux Mediterranean village and took off for a refreshing dog walk. 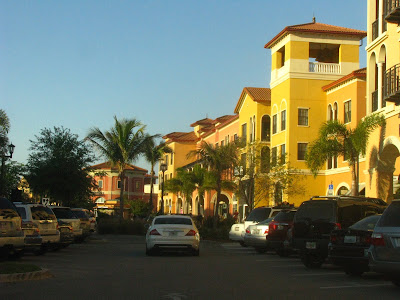 There was some abandoned development across Highway 41 so we took off walking, Cheyenne and I. 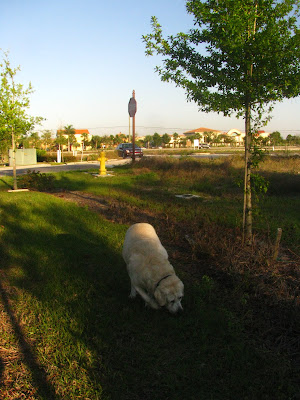 The sun was thinking about setting and I was thinking to myself as Cheyenne dashed back and forth, nose to the ground. 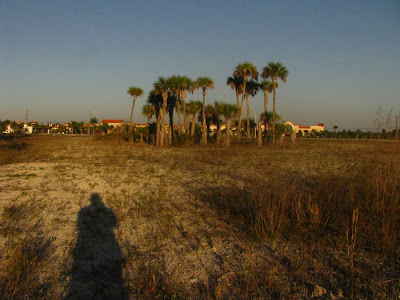 It's an odd thing but very noticeable to me, how little I fit in around these kinds of places. I am a hopeless consumer, I have no fashion sense and no ability to fit in with people whose lives seem to consist of flitting from store to store loading up with the latest gadgets and useless "products." Not only that, they aggravate me en masse and I am pretty sure that's my short coming. I like the Keys because these expectations don't seem to exist among the many and varied social strata that live there, particularly in the Lower Keys and key West. 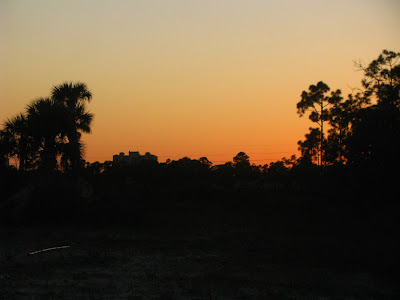 I am not that eccentric I don't believe so in a town where men dress as women and women date women I am able to fit in quite nicely even though I speak funny and I have no taste for sports or golf or manly things. Every visit to these consumer hell holes reminds me of the wisdom of my choice of place to live. That and the fact that this is Tea Bag Christian Right Wing Republican Hell. I feel like a rube watching the constant flow of traffic on Highway 41, and Cheyenne seemed to share my bemusement. 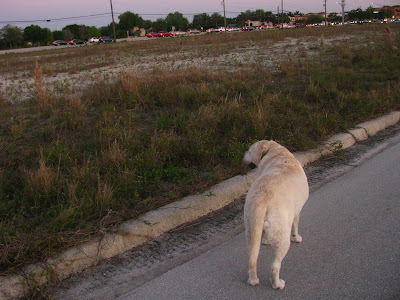 The sun went down a blaze of modest glory and night descended as I fervently hoped my wife had her new phone in hand. Motel 6 in North Fort Myers beckoned. 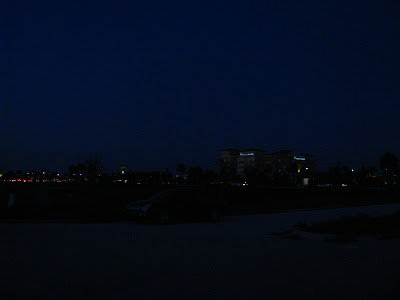 She had to fight the manager, who must have sensed her lack of suitability as a future customer, but she got her way, as always, and soon enough we three were sawing logs ready for more driving and sight seeing in the Fabulous Sunshine State.
Posted by Conchscooter at 12:01 AM 10 comments: Links to this post