From The Archives: Tropic Cinema

The newspaper notes this weekend is the tenth anniversary of the Tropic Cinema on Eaton Street. I wrote this essay five years ago. Changes were coming to the Tropic and and the future looked more mainstream and less experimental, as seen from the outside. I've been through enough radio non-profits to know how groups are born then mature, and change and go through middle age before they tend to wither and fade. Currently the Tropic is in middle age, doing well, and while they don't allow pets anymore (revolution!) they do continue to make money selling wine and beer. Some few things have changed over the past five years, of course but the Tropic stands and seems to be doing well enough, now with four screens, to have a secure future. At least until the lease runs out in a couple of decades! Long enough for me. Especially when I look back to the tentative beginnings of an Art Movie scene in Key West with screenings in a coffee shop on Caroline and at the San Carlos on Duval. I enjoyed the ornate former Cuban Consulate as a movie theater and was slightly sad when we attended the last screening before the brand new purpose built theater opened all three screens. Now of course the Tropic is my refuge. Like this, more or less given the passage of time since 2009 when I first published this essay: 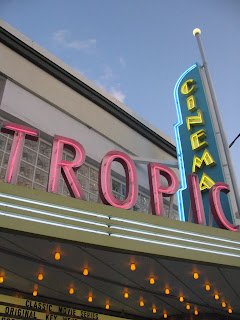 To me the Tropic Cinema is one of the defining characteristics that make Key West civilized. I am a fan of Voltaire Books a few blocks up the street, and I don't mind at all that Key West has it's own symphony orchestra, but the Tropic makes this a civilized town in which to live. 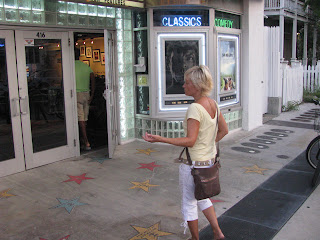 The communal experience of being in a large room, in the dark watching a greater-than-life-sized story unfold is in danger of extinction. I understand the seductive value of DVDs and movies seen in the comfort of home, but to be swept up into the plot one needs the sense of immersion that only a large screen can offer... 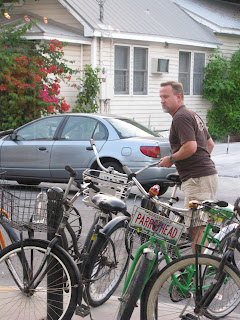 The Tropic Cinema is on the four hundred block of Eaton Street, between Whitehead and Duval, more or less equidistant from St Paul's Cathedral and the main Post Office, symbolic perhaps of the Art house theater's role part way between commercial enterprise and spiritual retreat. 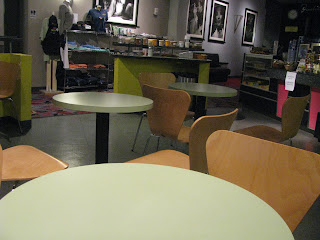 The theater is a not-for-profit organization founded at the end of the last century to bring classic movies to Key West. It started out using borrowed space in art galleries and the splendid San Carlos theater whose Cuban managers seemed to be rather bemused sometimes by the films they showed in their baroque building. I loved going to the movies at the San Carlos, they breathed life into the former Cuban consulate on Duval Street, at least for the Friday, Saturday and Sunday night shows of the nascent Key West Film Society. 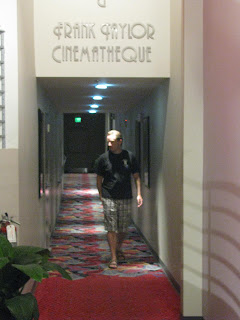 The society got a 35-year lease on the Eaton street property and started building a modern three screen theater for $1.2 million dollars in 2003. Jean Carper an anti-aging nutrition author has apparently made a fortune peddling her diet advice and put up $200,000 of the cash and got to name the main screening room in honor of her late mother: 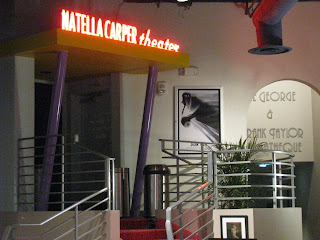 Natella Carper had a penchant for the flickers apparently and now she has her name in red neon like a marquee. But the Tropic is growing despite the parlous financial times we live in and there are plans to open a fourth, 48 seat screening room as an addition to the current theater: 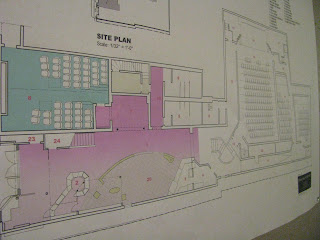 The Tropic is a membership organization and members get discount rates ($6 versus $9 to see a movie) and various invitations to special events. My wife and I have been members since early on but we decided a while back to upgrade our membership to $600 a year which gives us both free access to the movies year round. I guess the idea that we might watch a movie a week for an entire year seems a lot and it probably is, but the real idea is to support the society.We've always viewed the Tropic not only as a source of decent quality films but as a downtown refuge, a place to hangout in, and that got difficult over the past year when the Board hired staff members who viewed the Tropic as purely a business. We dropped out. New management, a more focused Board and we are back and happy to be in the theater again. Lori a dear friend has been promoted to manager and she has restored the theater to a convivial place to gather: 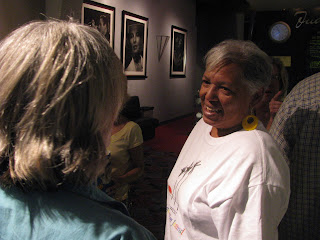 The theater boasts lots of movie memorabilia in the lobby, which these days is a bit truncated by the new screening room construction: 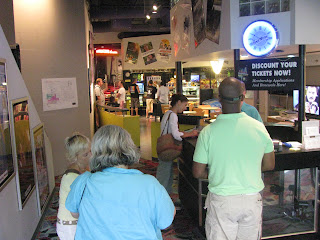 The society offers the usual lines of clothing......DVDs 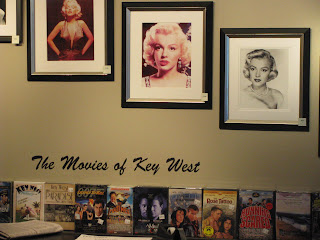 They also show DVDs in the lobby to keep up the ambiance
: 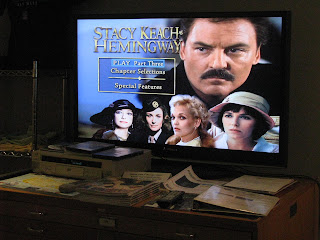 And the place is ankle deep in posters and the like: 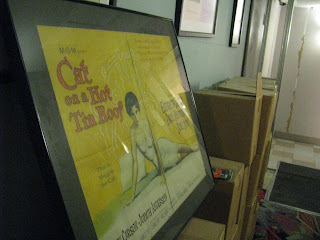 They have left up one sign from the Commissars of the Ancien Regime, but it's not as draconian as it might first appear. The Regal in Searstown used to have a policy of not allowing bags, to avoid bombs going off in the theater, they said, but the tropic is a different kind of theater: 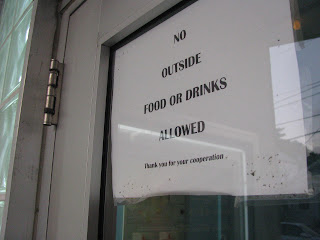 I like to spend money at the concession stand, for two reasons. One is I am supporting my preferred cultural outlet and the other is that they have an astonishing variety of food, with candies priced at a buck and a medium soda for just three dollars, so it's no great hardship to spend a little money here. 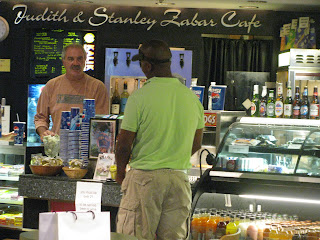 Zabar's Coffee is, I am reliably informed, a well know coffee in New York, and i like it well enough. Some times one needs something a little stronger at the movies: 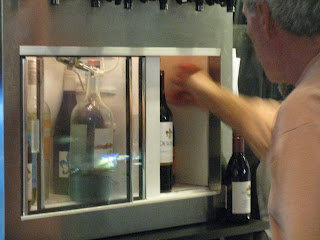 New Yorkers have their coffee at the Tropic, Mid-Westerners get their beef: 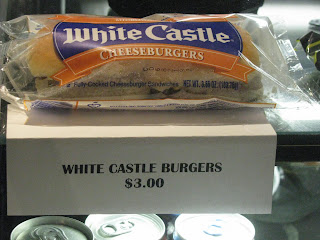 The rest of us get dollar Snickers and Key Lime Pie on a stick for a few dollars more: 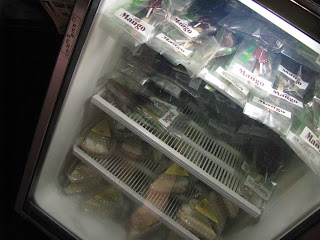 Not forgetting popcorn for all: 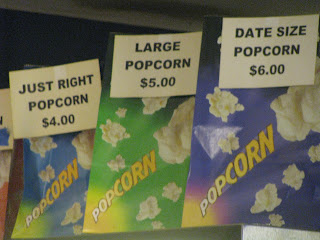 And now dogs are allowed back into the Tropic. The problem of dog ownership and going to the movies can get onerous in South Florida. It's hard to find a cool spot to park the car, cool enough to leave a dog inside in the summer if you live out of town. Plus it tends to rain without warning and leaving the windows open in summer guarantees a soaked interior. Much better to be able to bring the dog with you to the movies: 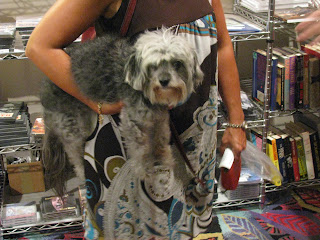 From the early days of the film society with Michael Shields, the future has always been one of making enough money to keep going and building on what he started the Tropic seems to be doing well. There are dozens of creative ways to raise money and named plaques are everywhere in the theater. I'd have happily paid $250 to get my name here had I thought of it and had my wife not thought me mad to want to stick my name above a urinal
: 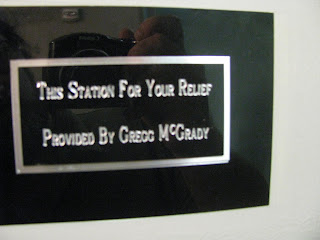 there are theater seats still available for plaques I believe. Management is also getting to show more mainstream films, movies that draw in patrons not devoted to movies with subtitles. The new Star Trek movie showed at the Tropic and the Tom Hanks/Ron Howard religious thriller Angels and Demons is also getting an airing at the Tropic. 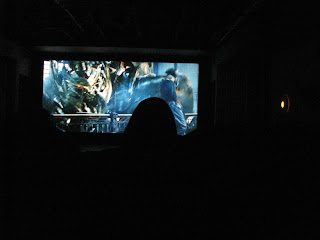 Unlike the Regal this is an adult theater where using cell phones and talking in the movies really is frowned on. All that and a glass of wine too. 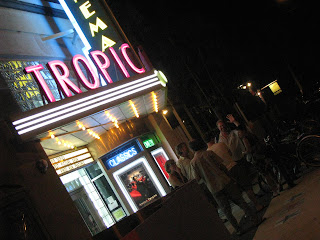 A great place to hang out. I'm glad the Tropic Cinema is going from strength to strength.