At Home In The Keys

What the pictures don't show is yours truly trying to keep up with his dog. I was in shirt sleeves and Cheyenne hadn't been walking the Bow Channel Bridge for a couple of weeks so we both  were happy. South Florida delight! 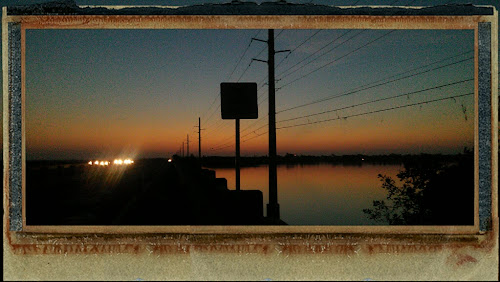 Going away even for just one week leaves me feeling out of touch. I come back to my world wondering how the world has been spinning in my absence, as though I had taken off for another planet eight days ago. Now I'm back from my interplanetary travel and not much has changed. One of my potted plants was looking dehydrated so watering was the first order of business. 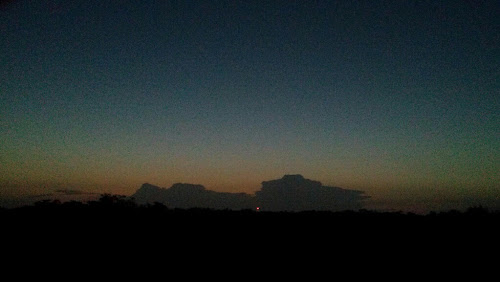 A house, unlike a boat, is a fixed place in the firmament, and is likely to be found as left. I read many years ago an essay by the late William Buckley, conservative thinker and avid sailor. He was a one percenter with a Swiss villa he visited occasionally and he noticed the same thing. He could leave the building with a coffee cup on the table and come back a year later for winter skiing and find the cup where he left it. The joy and the curse of a boat is that it is like a living thing, in motion and thus unreliable when left alone. His politics sucked mildly in those far off genteel pre-Gingrich days but he wrote well about sailing and in the stability of homes he was correct. 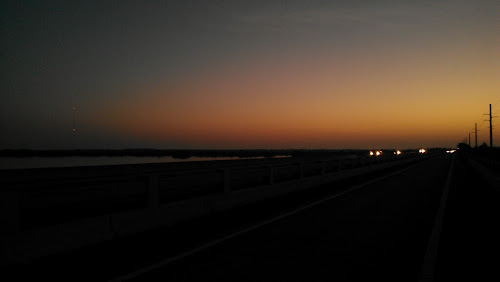 I went back to work wondering what might have transpired in my absence. Not much. One young officer resigned and moved on in my absence, no new trainees appeared in dispatch and thus we continued as before. It's good to go away because you realise that things move on just fine without you. I was reading about a terribly controversial proposal Up North that employers give five whole days of paid sick leave to their workers. Deal Reached on Paid Sick Leave in New York City - NYTimes.com Controversial indeed it would have been during the Pullman Strike in the 19th century but today? We regress it turns out and even as we read about the exposure of offshore financial havens allowing our leaders to evade taxes by putting their fortunes "to work" in offshore banks, we turn our national noses up at the notion of paid sick leave. Secret Files Expose Offshore's Global Impact

I've banked nearly 300 hours over the past nine years and I am grateful to the city for my sick leave (and to my genes for my good health - so far). 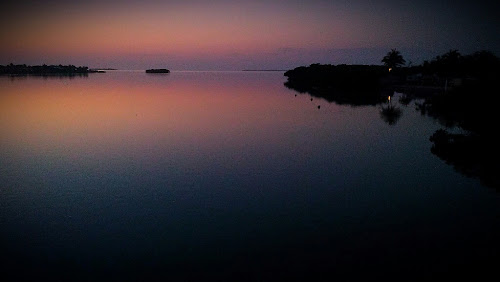 Locally our state representatives have been feeling the heat over a new law that would allow multinational corporations to avoid paying local property taxes if they take over land formerly owned by the US military. Monroe County protested saying we the people were owed nearly twelve million bucks, back dated to 2007 for land formerly occupied by the military at Peary Court. Our Republican representative leapt to their defense saying Balfour Beatty of London England needed the tax break, a position that came as a surprise to our tax assessor. So she changed her position did our Republican representative in Tallahassee, and said they should pay taxes only on the homes lived in by civilians... A position taken up by the Republican leadership which currently runs the legislature in Tallahassee. That it will be impossible to prove who lives in what and that Balfour Beatty is not the US military and is thus subject to taxes has nothing to do with anything. Money talks and we the people get screwed again. 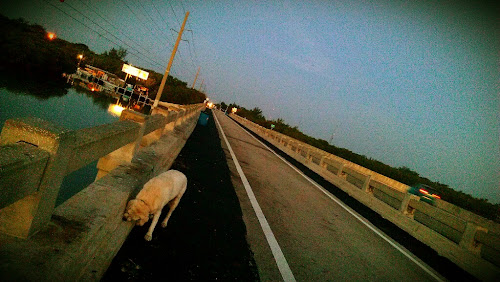 The newspaper had a pretty good piece of news inasmuch as the recycling rate in the Keys has gone up from the piddly six percent of yore to 26 percent now. Miraculous you might say but I just hope it's true because it would mark a real change. I've heard the arguments against recycling that it is not much more than a feel good stop gap to justify our consumer society. On the other hand if we do nothing...so I'm prepared to recycle and I'm glad to see the Lower Keys are getting with the program. Next up getting the bars on Duval to recycle their bottles and cans... 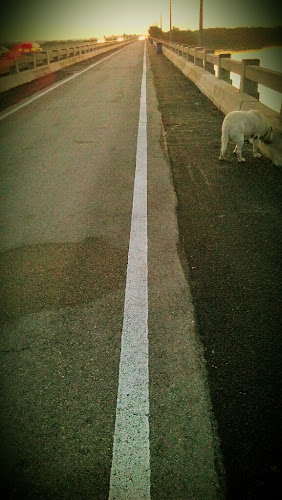 I caught a glimpse of the half moon reflected on the waters below the bridge. It wasn't much of a picture but it reminds me I could see the bottom shimmering under the moon's reflection. Water clarity isn't what it was but it's still not bad. Sewer installation is on the agenda for the Lower Keys, a public work that would help immeasurably to clean up the waters and revitalize the reef, but it's a slow business and it makes everyone crazy as there will be charges (taxes!) to pay for the installation. While the state government is busy giving away taxes to corporations infrastructure improvements go begging for that precious  cash. 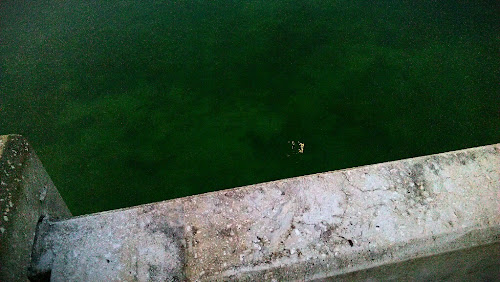 We are moving inexorably and I might add at speed, toward mid summer so the dawn is coming up about the time Cheyenne and I go for our morning walks. Glorious stuff. 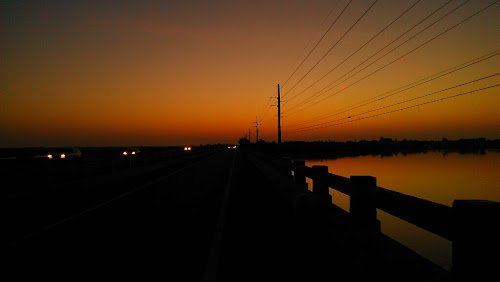 Winter was weird in the Keys with three measurable cold fronts as I recall, and the coldest of them hit while I was away in the Outer Banks. Spring is coming in with heat and humidity and light breezes. Some mornings the breeze is absent altogether and you get this: 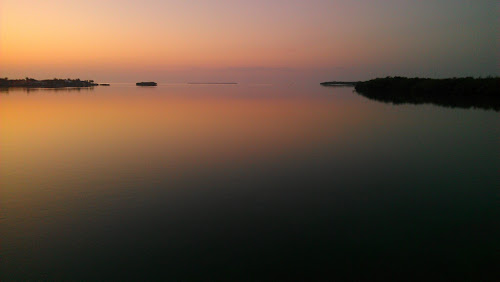 No matter how hard humans try to screw it up it's good to be home.