Kafka At The DMV

There is nothing quite so annoying as finding yourself in a car on a beautiful sunny day with a fresh cool breeze and not a care in the world until you pull up in your cage behind a trim motorcyclist enjoying a better two-wheeled day than you. And he had an Adventure Rider bumper sticker on his factory BMW saddlebags. It was all adventure on Highway One at Crane Boulevard, the only traffic light between Big Pine and Key West. 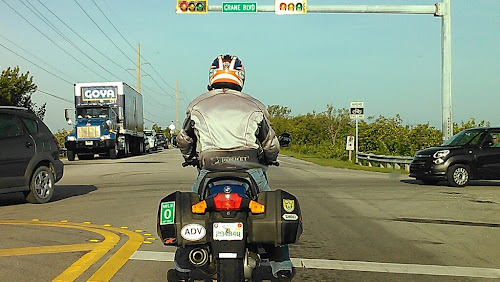 I lost track of the motorcycle by the time I got to the boulevard which the newspaper says is supposed to be finished in three months. A likely story... Mind you we have been living with this main artery looking like a war zone entering Key West so it will be rather odd when at last the work is finished. 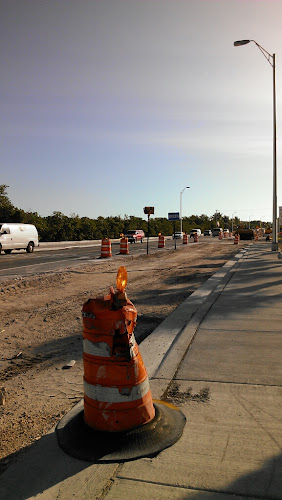 A great victory took place, unnoticed, this week when my wife discovered our local tire shop is cheaper than Costco on the mainland. I prefer to shop locally even spending more money, but to get four tires for $170 less than the corporate chain cheered me up no end. 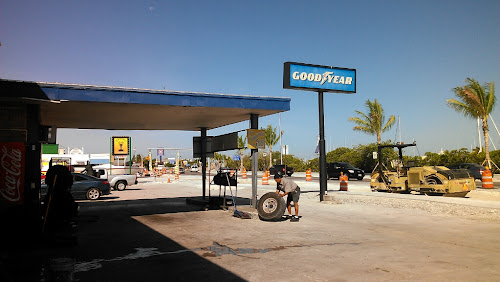 Cheyenne was welcome in the office which was nice, and the tires had arrived after being ordered a day before. The SEL version of the Fusion gets extra wide tires, on the order of 225 which no one seems to stock and I got four, mounted for five hundred bucks so I was pretty pleased with myself. 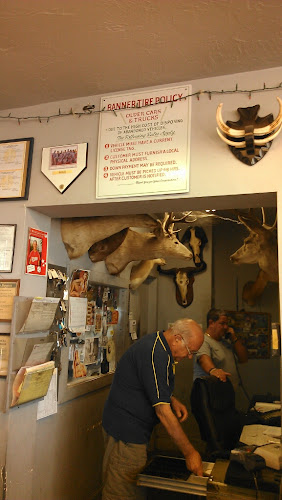 Plus we weren't hauling boxes... 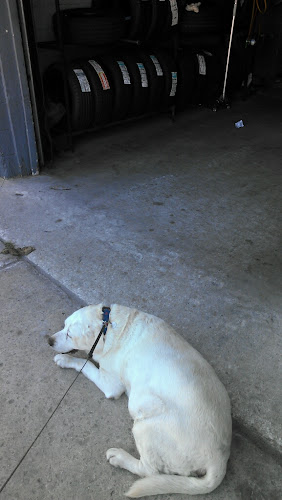 Later, as we left on our new rubber, Cheyenne and I spotted a window tinting shop. It was my lucky Monday and we pulled in and the car went straight under the knife. That was another $160 plus a $15 dog hair vacuum charge, very reasonable under the circumstances... 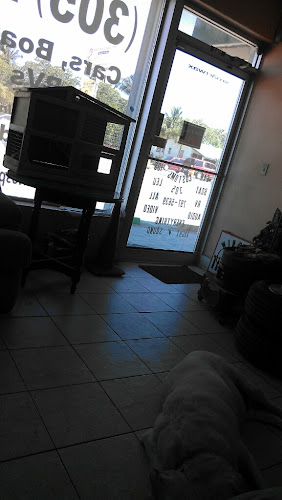 ...as she does tend to shed. A bit. Quite a bit really; Labrador hairs permeate every aspect of our lives. The finished result was lovely, and a legal shade of dark. We can face the summer with equanimity. I'll bet the BMW rider would have been jealous; all this with air conditioning and satellite radio too! 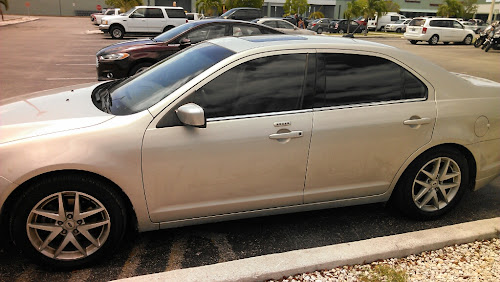 Another stop for a refill of ear medecine for Cheyenne and a lamb sandwich for me at Kennedy Cafe and we faced the constant stream of Highway One traffic again. For some reason not known to me traffic has been pouring thick and slow along the sole highway all day long, and the snowbirds left ages ago. This view across the salt flats I will miss when we leave next weekend: 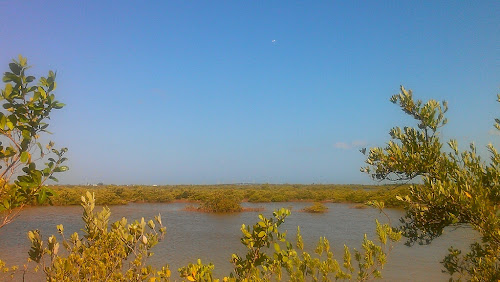 The movers are coming Saturday to take the big stuff so I was grateful for the breeze that cooled me as I worked under the house emptying the portable shed and cleaning the contents. 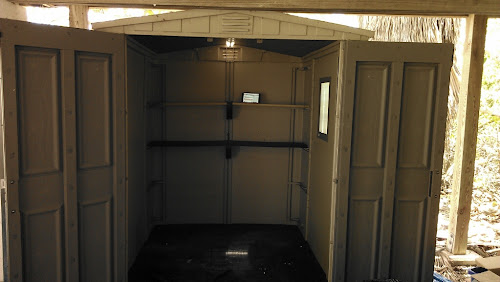 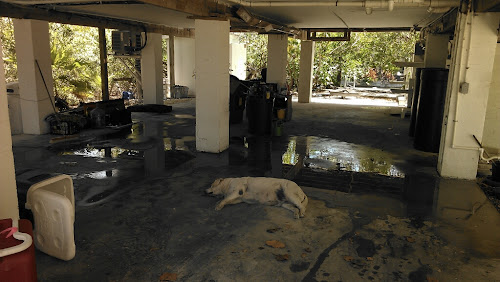 I got a letter from Freddie Macs' lawyers saying I needed to prove my residence before I leave the house and hand over the place next week. What an odd request I thought to myself, after all these years of correspondence... But I had an official message from the supervisor of elections which I thought fit the requirement nicely. Then my wife called from the Deparrtment of Motor Vehicles in Marathon where she had gone during her lunch break... It seems that to change our address we have to provide the guardians of our safety at the motor vehicle office with a pile of IDs showing we are (still) who we are. For an address change! Amazing. The best part is we haven't changed our address so we have no bills sent to us at the new place but Florida wants us to change our documents within ten days of moving. So, you brainy legislators in Tallahassee how in hell do I provide proof of residence at our new address when I have to provide a utility bill or car registration with that address on it to get the address change recorded? I really do think Al Quaeda has won. They have frightened our leaders and most of my neighbors into premature senility and fearfulness. Welcome Big Brother. At this point the only benefit I seem to get from voting is being called up for Jury duty and never getting selected because I work for the police. I requested an exemption and because everyone in power is nuts, the judge acting like a Too-Big-To-Fail Bank, refused me. So next month I get to spend two days at the courthouse sitting around waiting to get rejected. Last time the judge asked me if I could face my colleagues at the police station if I returned a "Not Guilty" verdict? "Sure" I said suavely confident. They rejected me anyway. 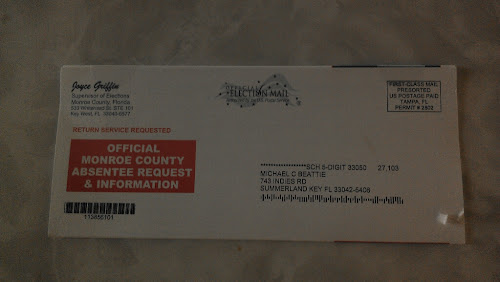 I've been a citizen for twenty years and never missed a chance to vote but I am wearying of what is coming to seem more and more like a farce in the face of the removal of any pretense at restrictions on the flow of big money into the process. But the dogged part of me says that's what the dicks in power want so I guess I shan't give up and I shall keep voting. Maybe Florida could enact legal medical marijuana this November? That would be startling. I'm not sure what it would for the already weak work ethic in the Sunshine State, but medical marijuana might save Florida some incarceration costs. My home is starting you look either monastic or prison-like with all the decorations and travel souvenirs now settling in at the new house. 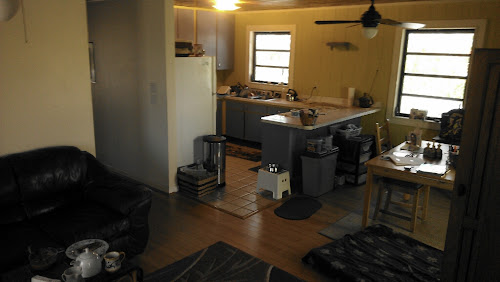 Cheyenne is not coping well with the move. I suspect she was dumped at the pound when her military family got ready to move because she has been acting really needy and worried. I keep hugging her and taking her with me as we go back and forth carrying stuff between the houses, but she isn't as relaxed as normal. We are planning on taking turns not leaving her home alone next week after we get settled in the new place. I wish I could reassure her but I fear that fussing will make it worse. 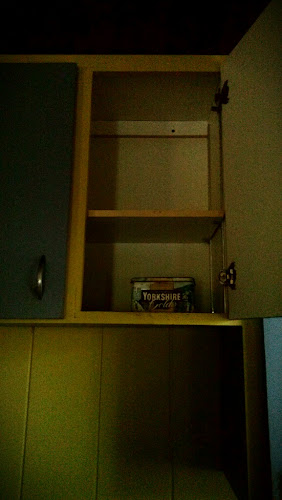 The cupboards are bare, save for a packet of tea bags and two plates, but I did find the front door key after a decade of sitting unused under a rock. I tried it in the lock and it broke, so the realtor had to get a locksmith right away. Even when the cupboards were full we never had anything much of value in the house and looking ourselves out seemed a more likely outcome had we been busy with the stupid key all those years... 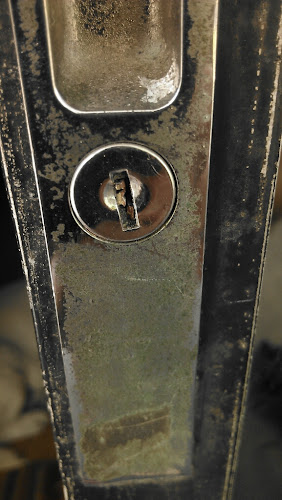 Renting means we have to lock the home that is not our house. One more thing to get used to, not locking yourself out. The neighbors are lovely though, unlike the grumps on the street where we have been living. I am quite looking forward to living among cheerful people. It will be good for me.

Posted with Blogsy
Posted by Conchscooter at 12:45 AM 6 comments: