The only positive thing I can say about this is that the driver of the car was still inside it even as she blocked the bicycle path on Palm Avenue. 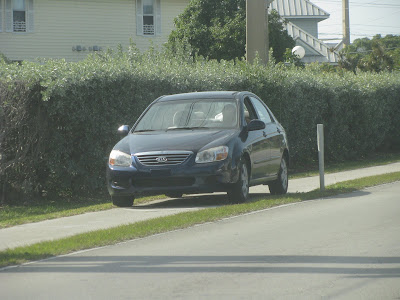 Parking is a such a fraught subject in Key West one hardly knows where to begin. The city manager, in his infinite wisdom created a supervisor of parking to add to the ranks of well paid leaders in the city. The plan is to have one person come up with a way to make parking fair and equitable in the city, particularly in the streets of Old Town and to supervise the parking control officers who are now not part of the city Police Department, but are their own city division. The issue of on street parking is part of the big annoyance for residents. Some of whom even cover their cars and with embroidered pride. 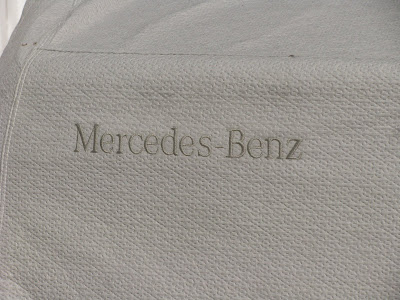 The thing is a lot of homes on narrow streets have had their driveways or garages converted to living space to augment the square footage of their cottages. Yet these residents still want to be able to park close to their homes if not directly in front. And not everyone wants to ride a powered two wheeler. Like this devoted owner who apparently drapes his/her pride and joy in towels for some reason while enjoying a free scooter space. 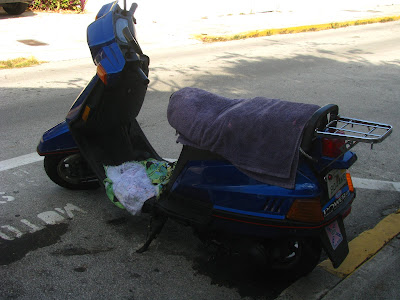 The Old Town parking conundrum gets worse in winter when snowbirds and extra visitors tend to clog up the city parking spots to capacity. I found this stretch of Windsor Lane converted into a parking lot from a sidewalk. The Jeep bore a bumper sticker advising the reader to indulge in random acts of kindness which I thought rather ironic as I dodged the vehicle to continue my walk in the middle of the narrow street. 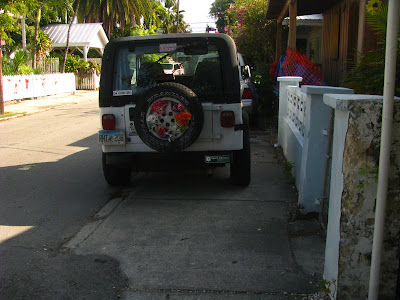 On the whole I find it not too complicated to find somewhere to park as long as walking a couple of blocks isn't out of the question. In that I am helped by the fact my Ford has a Florida license plate issued with the word "Monroe" stamped on it. The local county designation allows one to park the vehicle in spaces marked "Residential" and there are a few of those around Old Town. 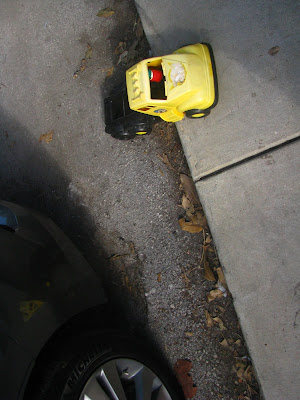 Among all the plans under review the city parking "Czar" is considering changing rules for Residential parking spots and is debating the merits of issuing permits, possibly only for Old Town residents or workers or possibly for all city residents, thus excluding county residents. While nothing has been decided and everything is up for discussion as one might imagine everyone wants to have a say in the outcome. Not everyone naturally understands the purpose of those strange white markings on the street. Fitting one's car into them is impossible for some drivers. 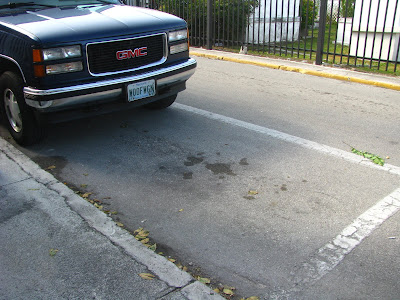 Technically paring motorcycles on sidewalks isn't legal but in some places around town, like outside bars, people seem to get away with it. This is Don's Place on Truman. You will always see motorcycles and scooters on sidewalks outside the Green Parrot on Whitehead for instance. 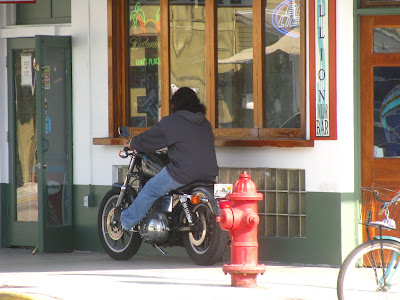 The city is absolutely littered with free motorcycle spaces and bicycle racks which makes cars, especially in this benign climate, pretty redundant. But you'd be amazed how many people block driveways and get towed from business parking lots because they didn't read the signs. 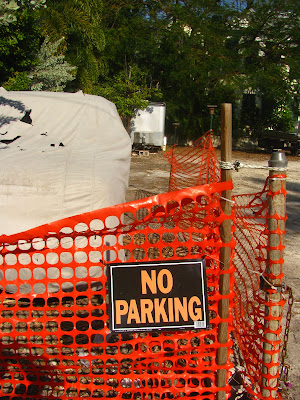 One piece of advice I offer is not to imitate others. Blocking lanes can easily get you towed, and juts because you see someone else do it doesn't mean you will get away with it too. Some locals know what they can get away with... Here we see Madjack's Rolls Royce http://madderonthehill.blogspot.com/ blocking Love Lane. Do not try this when visiting: you will get towed and face a bill up to $300... 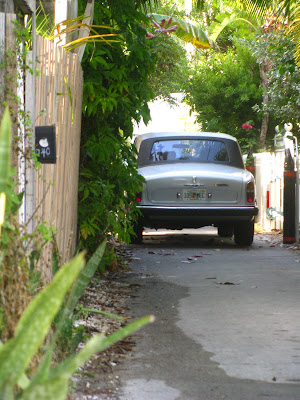 Towing fees are steep enough the Mayor started a campaign in the newspaper to review private towing policies and prices. That was until one towing company pointed out the Mayor himself has had vehicles towed off private lots a few times recently. That subject suddenly went dark. I wonder myself how towing companies get to charge such huge fees for removing vehicles for illegal parking from private spaces, but I generally spend a little extra time finding a non metered spot as convenient as possible to my destination and then allowing sufficient time to walk the rest of the way. 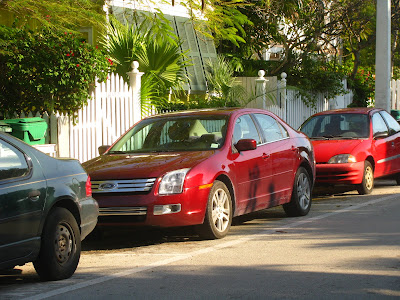 A properly parked Ford Fusion is a thing of beauty, but if you have a motorcycle, say a Triumph Bonneville, and you aren't bringing the dog to town, far better to ride, and park, that.
Posted by Conchscooter at 12:01 AM 2 comments: Links to this post