Cow Key Channel is that body of water that lies between Key West and Stock Island. Technically the water is in Monroe County and the city limits lie at the seawall so one looks out on the boats at anchor and thinks perhas they too will be regulated soon enough by the county. That's because county officials are looking to manage anchored boats like these: 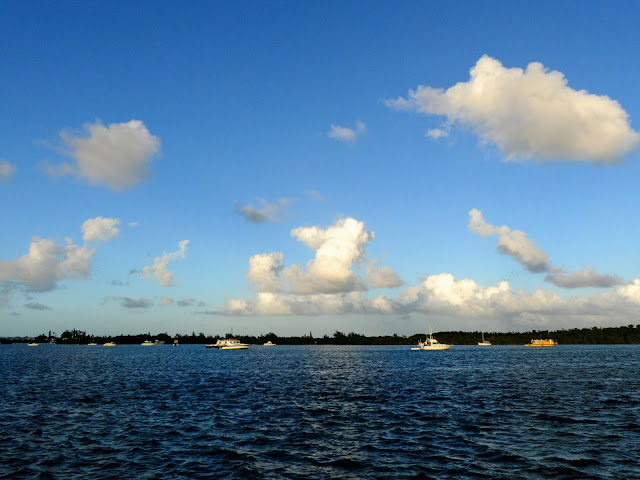 The seawall along Smathers Beach doubles as sidewalk and bike path, a place to enjoy sunsets and sunrises, take exercise and sometimes walk the dog, though I find it rather too dull for Rusty and therefore for me. In the picture below you can see a canoe tied to the seawall, a conveyance for getting to the boats out in midstream. 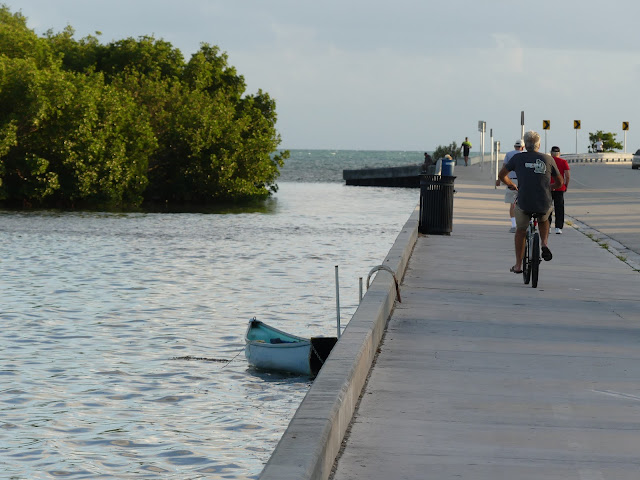 Cow Key Channel is a convenient place to live as ou can see in the picture below, parking for your dinghy and your land transport: 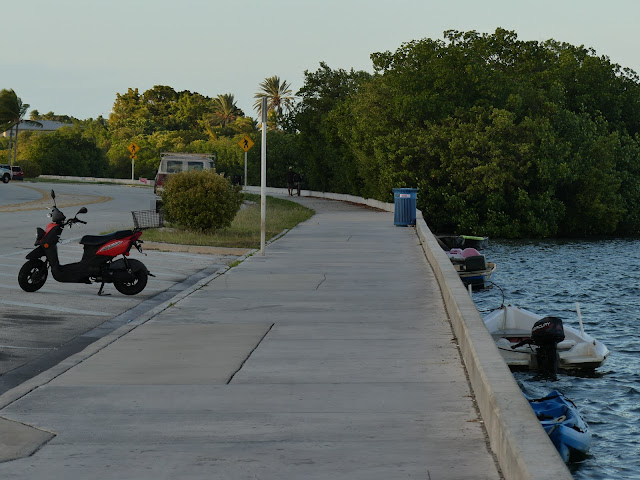 The channel itself is well protected from the usual winds out of the southeast or i winter from northerly storms. The waters are pretty shallow and are usually pretty calm though the tides move a lot of waterand the currents can be fierce. 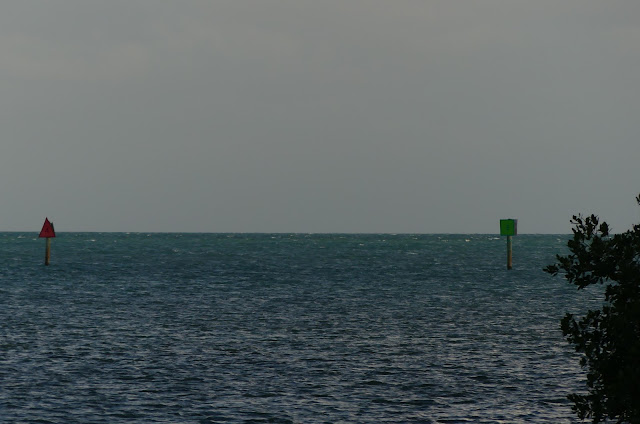 Which makes these kinds of gatherings either romantic holdouts or eyesores depending on your point of view. Consider too, as the county leaders do that these people have no sewage outlet except direct into the water. So now there are plans to create proper anchorages with facilities and fees to keep nearshore waters clean and sewage free especially now the county has been planting sewaers everywhere for homes ashore. 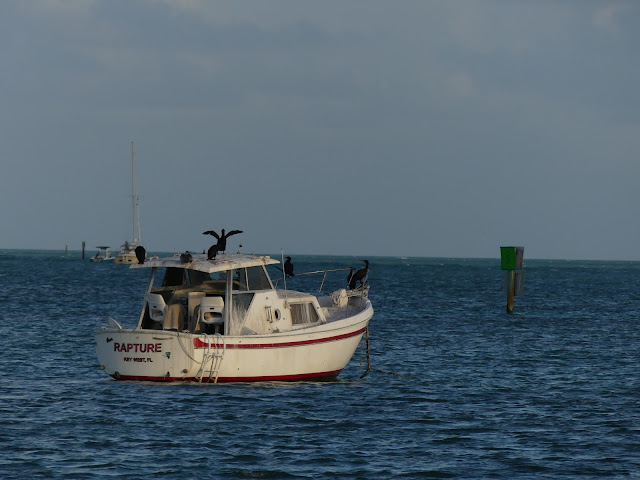 I have no strong feelings about these matters but many people do. I have done my share of living at anchor and in marinas and I am well aware of the pitfalls, the discipline necessary to keep your water tank full, your anchor secure and your boat tidy, a job at which most of these people fail signally. And so they attract unwanted attention. 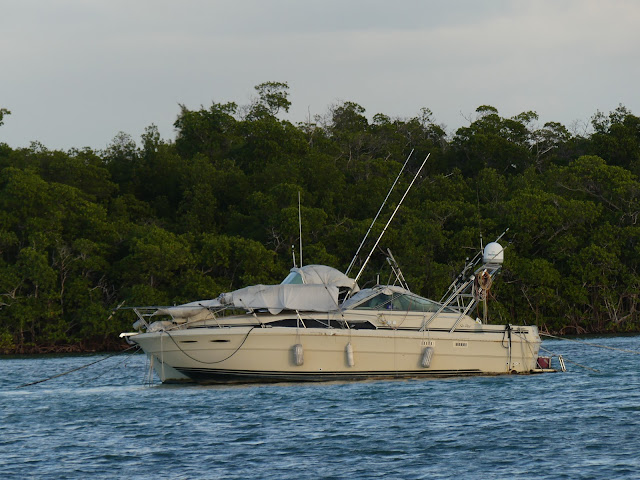 The problem with living on a boat is that it is at best cheap housing bt its not a lifestyle that encourages sailing or movement of any kind. All the onboard detritus of daily living makes it hard to get a boat in motion if its motor even works or its sails are more than tatters. There again not everyone who lives on a boat knows how to drive one. 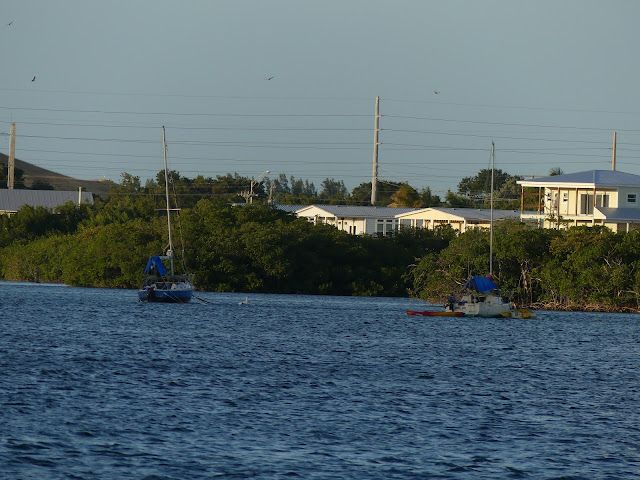 In a city desperate for cheap housing it sees counter intuitive to make life awkward or more expensive for these last ditch romantics from a previous era. For my part I'd rather not live for free on the water as it's a hard life and usually lonely - not too many women want to live in a bleach bottle bouncing on water with a toilet that causes you to reflect closely on what you've eaten and where it goes. 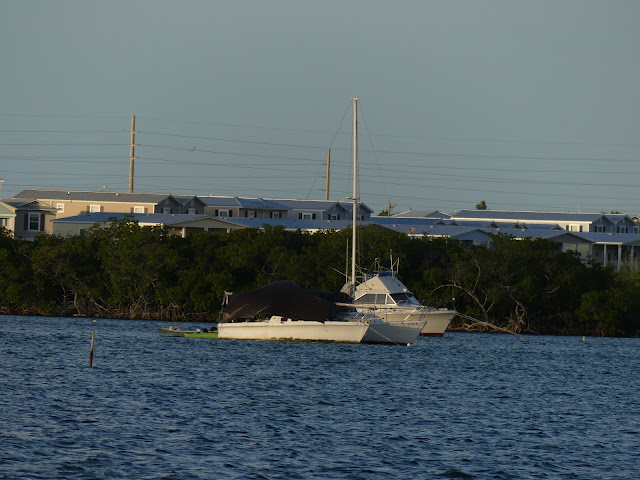 I find these waterborne neighborhoods depressing as the boats are deteriorating as much as fiberglass deteriorates and there is an air to me of apocalyptic gloom to these floating sheds. The interior is almost always white fiberglass with wires hanging and nuts and bolts visibly supporting the rigging. Air conditioning is hard to organize as you'd need a powerful generator so summers are sweltering in whatever breeze there may be while cool winters can be damp and confining especially further north. 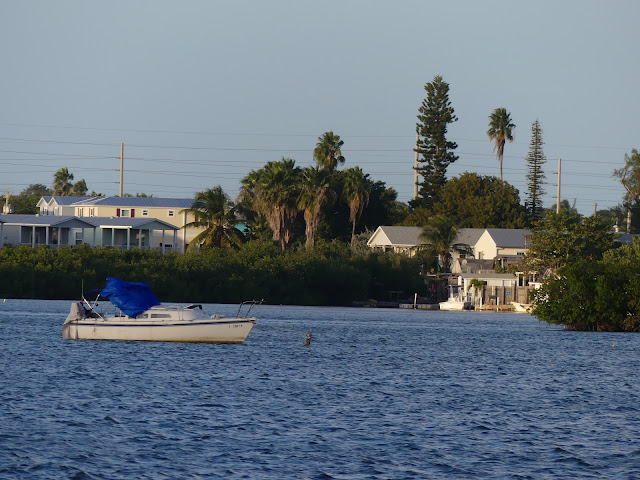 After many years of living on a boat I figured marinas were too much like trailer parks and living at anchor was too inconvenient. I like the boat as home when traveling, not when earning a living. 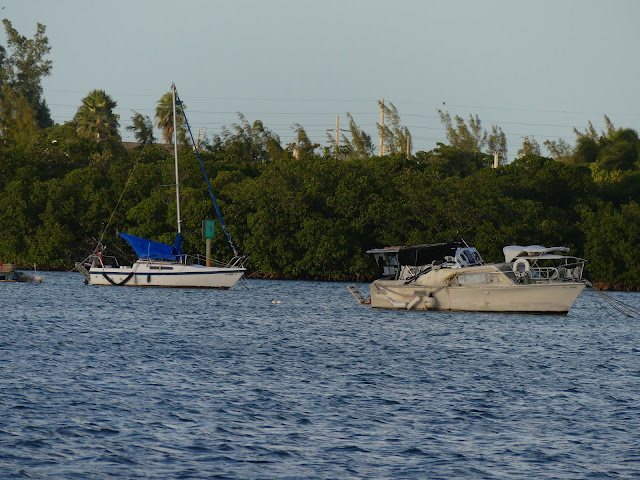 If these craft do get orders from Monroe County to attach themselves to secure publicly provided moorings they will probably pay two to three hundred dollars  a month. The county will probably have to get a pump out boat, a floating honey wagon to empty toilet tanks and then also provide somewhere secure for the boaters to land their dinghies while they go to their jobs ashore. 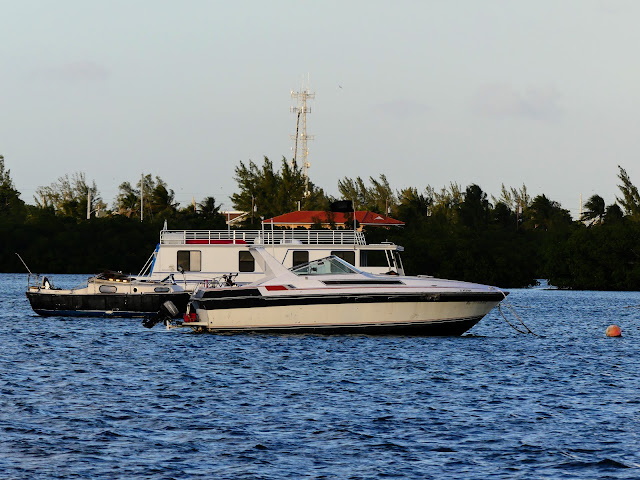 It all seems rather complicated but that's the discussion for the Boca Chica Channel just to the east of Cow Key CHannel. There are dozens of boats at anchor between Stock Island and Boca Chica. It's too easy to live on the hook (at anchor) in the Florida Keys. 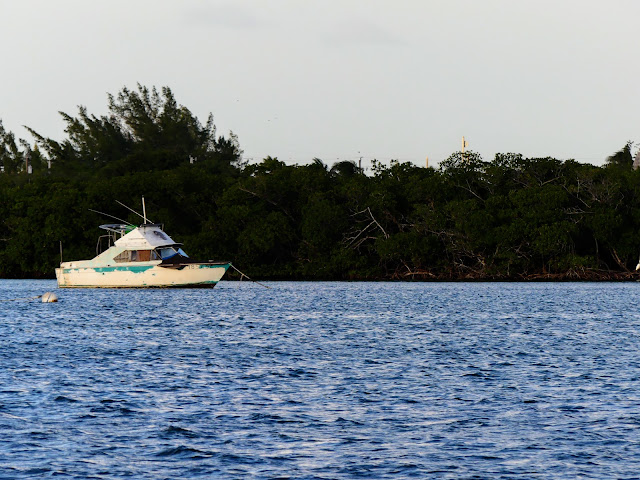 And there is the undeniable charm of waterfront living: 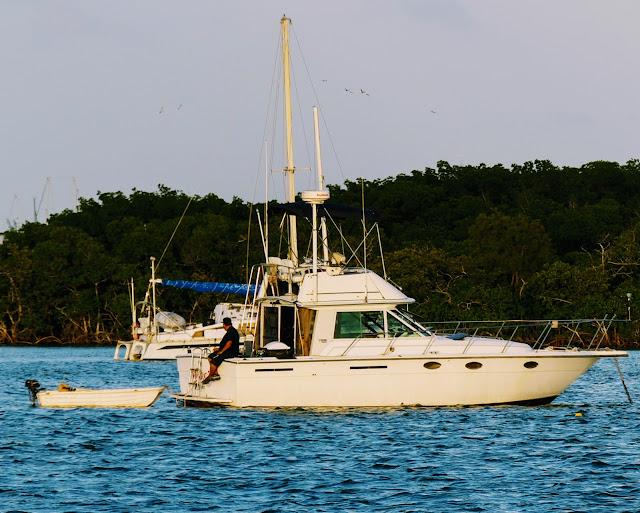 A nice houseboat could give you a one bedroom apartment on the water: 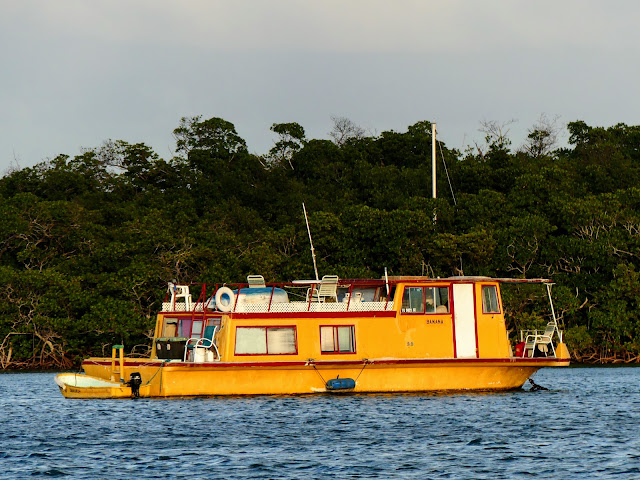 A kayak to go ashore provides exercise be it ever so brief: 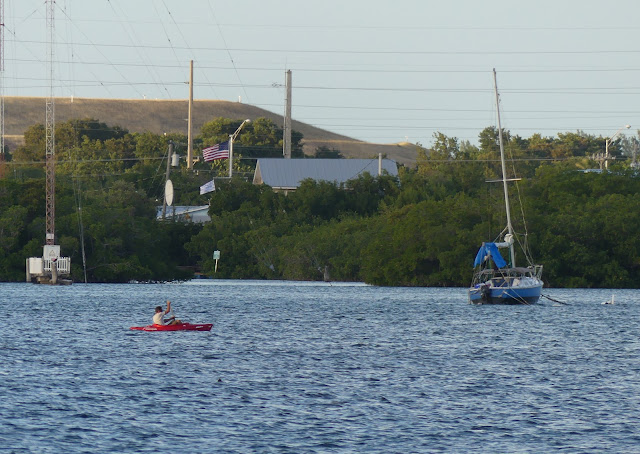 This chunk of seawall used to be called houseboat row (LINK) because there was a row of houseboats here. They were moved to Garrison Bight Marina in the city where they pay rent to be at a dock. They were two unsightly for the multi-million dollar condos that were built overlooking these waters: 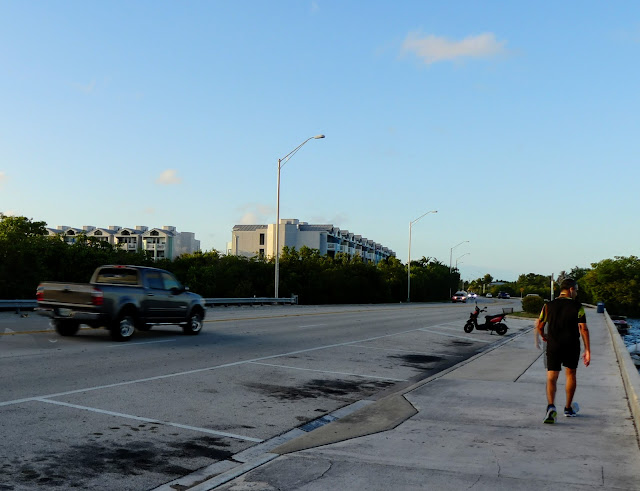 But aside from the boaty stuff people enjoy the waterfront here: 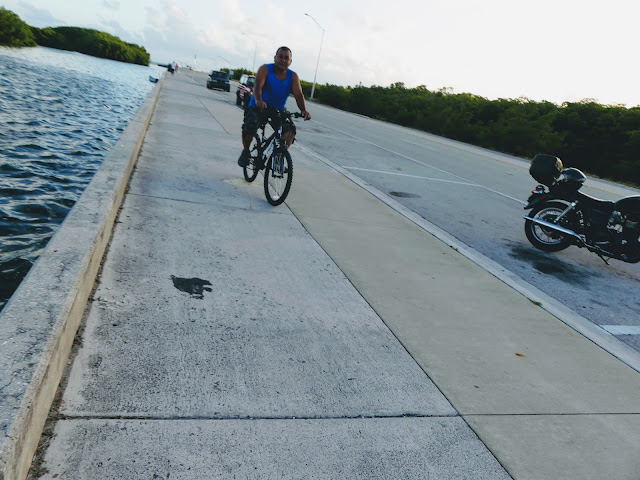 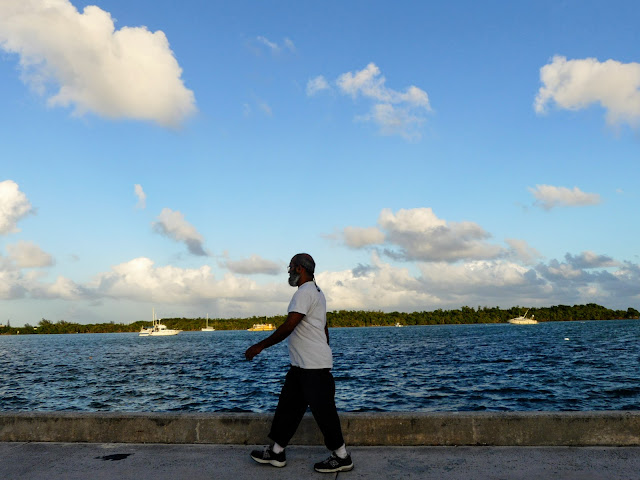 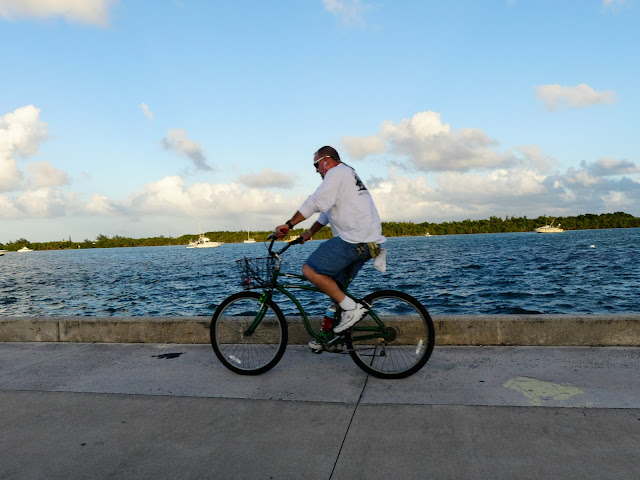 And the sunsets aroud the corner at Smathers Beach: 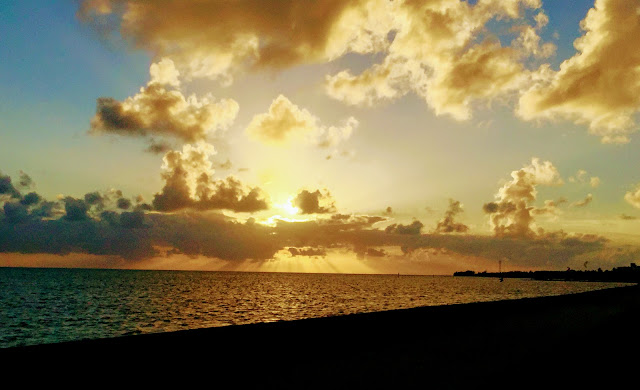